How Many People Did Stalin Kill? Inside The Horrific Death Toll Of The Soviet Dictator

After taking power in the 1920s, Joseph Stalin killed at least 9 million people through mass murder, forced labor, and famine, but the true figure may be as high as 60 million.

From the 1920s through his death in 1953, Joseph Stalin ruled the Soviet Union through fear and violence. He instituted punitive policies that resulted in devastating famines, sent his enemies to prison camps, and executed those he believed opposed him. So, how many people did Stalin kill?

The number is difficult to determine. No neat and tidy sum encapsulates the terror of the Stalin years, which means that many historians have had to cobble together facts from available sources. But various estimates have emerged.

According to historians who studied Soviet archives before and after the fall of the Soviet Union, Joseph Stalin likely killed between six million and 20 million people. However, given the widespread and often unrecorded deaths of the Stalin years, it’s certainly possible that that number is even higher. 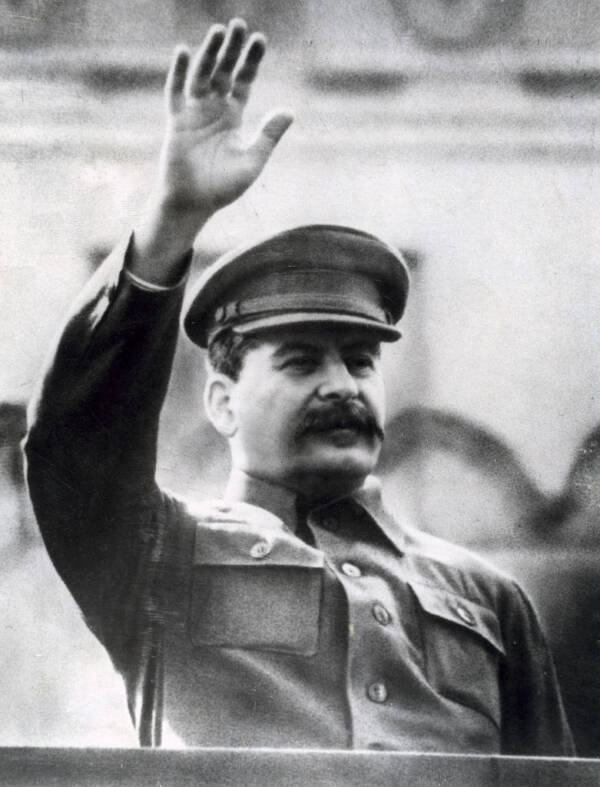 Public DomainBy 1941, when his photo of Joseph Stalin was taken, millions had already died from famine, exile, and executions.

Born as Ioseb Besarionis dze Jughashvili on Dec. 18, 1878, in Gori, Georgia, Joseph Stalin seemed an unlikely candidate to become a Soviet dictator. Small, with a pockmarked face and deformed left arm, Stalin spent his early years under the thumb of his violent, alcoholic father.

But the future dictator found his calling when he started reading Karl Marx while enrolled at Tiflis Theological Seminary. Inspired by Marx’s message, Stalin left school in 1899 and embarked on a meteoric rise as a revolutionary.

The man met the moment. Having renamed himself “Joseph Stalin” or “Man of Steel,” Stalin joined the Bolshevik party, became close with Vladimir Lenin, and helped organize strikes and demonstrations. When Lenin took power following the Russian Revolution in 1917, Stalin clung to his coattails, becoming the General Secretary of the Communist Party in 1922.

And when Lenin died in 1924, Joseph Stalin assumed power and made himself dictator by the end of the decade. Gazing out over the Soviet Union, he became determined to industrialize his country and build a fully communistic economy — no matter the cost.

How Many People Did Stalin Kill?

From 1929 until Joseph Stalin’s death in 1953, millions of people died in the Soviet Union as a result of his policies. So, how many people did Stalin kill? Though the exact numbers are open for debate, historians generally focus on three areas: famines, executions, and prison camps.

Beginning in the 1930s, for example, Joseph Stalin instituted his collectivization policy, which sought to replace small farms with state-run collectives. As reported by The New York Times in 1989, Soviet historian Roy Medvedev estimated that these policies resulted in “nine million to 11 million of the more prosperous peasants driven from their lands and another two million to three million arrested or exiled,” many of whom died as a result.

Medvedev also noted that six to seven million likely died during the famine that emerged from Stalin’s collectivization policies. However, Timothy Snyder, an American historian who published a book in 2010 that analyzed the question of how many people Stalin killed, argued in The New York Review Of Books that “just” five million died as a result of Stalin’s famines between 1930 and 1933.

Either way, Stalin’s policies triggered extremely brutal famines, especially in Soviet-controlled Ukraine. Ukrainians dub the famine of 1932-1933 “Holodomor” which means “murder through starvation” and see it as a purposeful genocide. 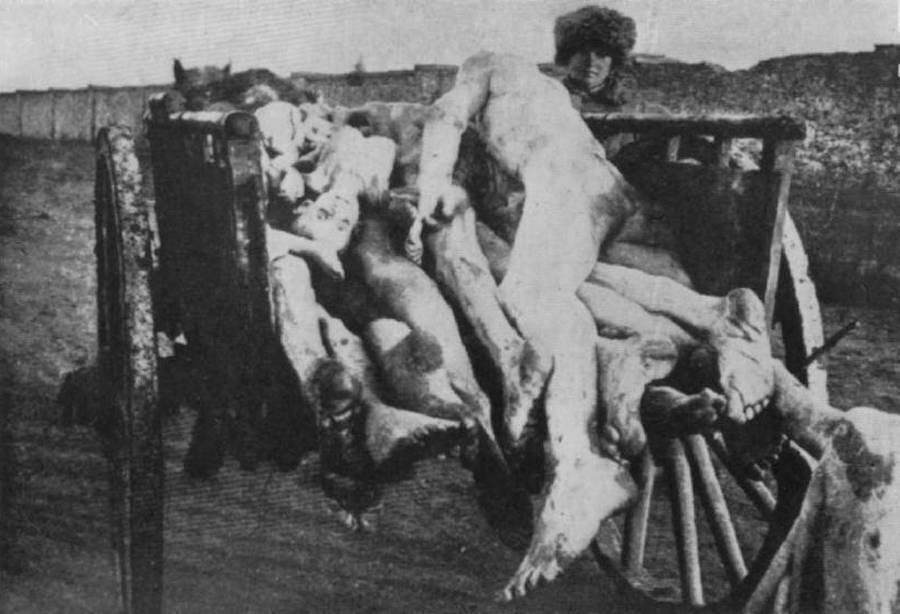 Wikimedia CommonsVictims of the famine in Ukraine, which Ukrainians see as a deliberate genocide.

When Stalin announced his plans for collectivization, many Ukrainian farmers resisted. The Soviets responded by labeling resisters as “kulaks,” punishing farmers for not reaching quotas by taking their crops and killing or deporting thousands upon thousands. As a result, millions starved to death.

Stalin himself — in a conversation with Winston Churchill — allegedly claimed that some 10 million kulaks were killed at his command.

“Some of the starving were in such a bad way that they had begun to stink already,” one survivor testified in Congress in the 1980s. “You would see them walking about, just walking and walking, and one would drop, and then another, and so on it went.”

Stalin also infamously executed or imprisoned his enemies. During the Great Purge — also called the Great Terror — between 1936 and 1938, the Soviet dictator executed as many as one million people.

He also sent millions more to Soviet gulags. Medvedev estimates that some four to six million people were sent to such camps, many of whom didn’t return (including Mevdedev’s father). Snyder, on the other hand, believes that approximately one million lost their lives in the gulags. 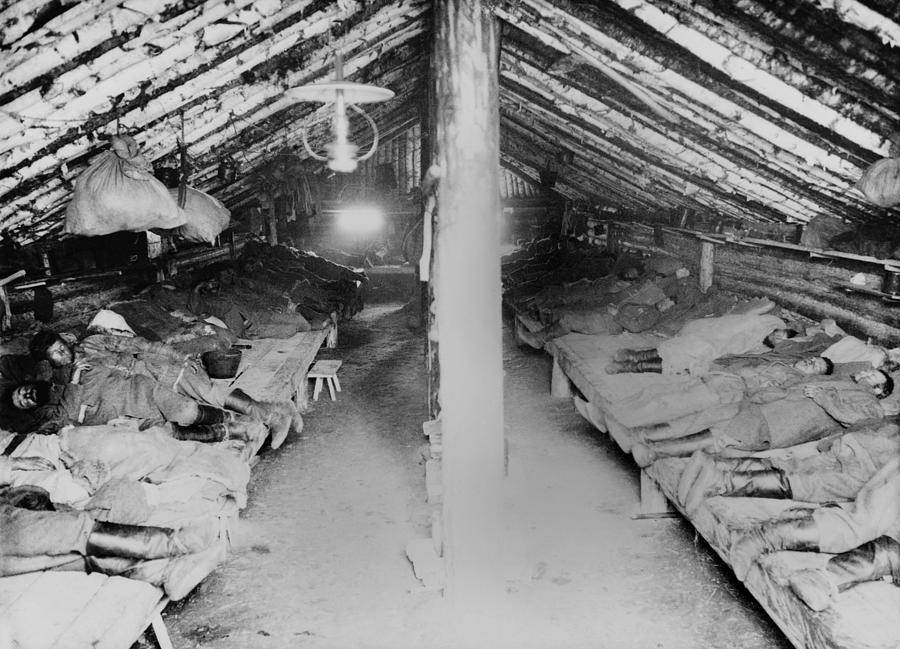 Library of CongressMale prisoners at a gulag in Siberia.

The prisoners who died starved to death, were worked to death, or were summarily executed. As such, it can be difficult to determine the exact number of people who died in the gulags.

What’s more, according to Stanford University’s Hoover Institution, several historians of Stalin’s gulags have documented how the camps routinely released prisoners who were near death to artificially reduce their official mortality statistics.

So, how many people did Stalin kill? Medvedev, without access to official archives, estimated in 1989 that Stalin killed 20 million people. Snyder, with access to Soviet sources, put that number closer to six million in 2010.

Other historians — largely before the fall of the USSR — have guessed that Stalin could have killed millions more. Some guess that as many as 60 million may have died under Stalin’s rule.

That raises a chilling question. Was Joseph Stalin the most murderous dictator of modern times?

Was Stalin History’s Most Murderous Dictator?

Tragically, Joseph Stalin was not the only murderous dictator of the 20th century. But while he likely killed more than Germany’s Adolf Hitler — who oversaw the deliberate extermination of 11 million people, including six million European Jews — Stalin did not kill the most people in the 20th century.

That dubious title belongs to Mao Zedong. According to The Washington Post, his “Great Leap Forward” policies between 1958 and 1962 resulted in the deaths of at least 45 million people. 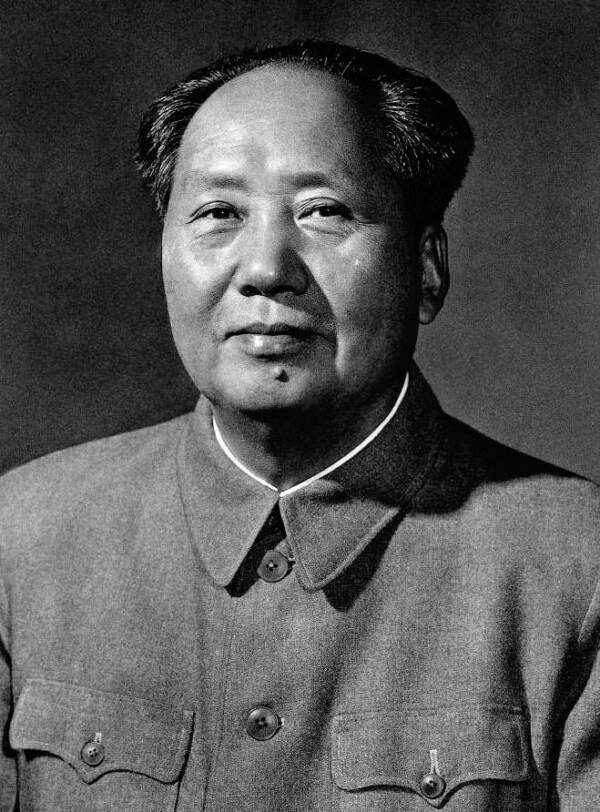 Public DomainMao Zedong in 1963. Historians estimate that 45 million died over the course of four years under his “Great Leap Forward” policies.

Other dictators from the 20th and 19th centuries have much lower — but still horrifying — death rates. King Leopold of Belgium, for example, was the responsible for the deaths of between eight and 10 million people in the Belgian-controlled Congo. Pol Pot, determined to turn Cambodia into an agrarian Utopia, killed an estimated one-and-a-half to two million people through his forcible policies — nearly a full quarter of Cambodia’s population.

As such, when it comes to questions about how many people Stalin killed, the true answer may never be known. Certainly, the Soviet dictator killed millions — probably more than Adolf Hitler. And he seemed to understand the limits of humankind when it came to comprehending such mass death.

“One death is a tragedy; one million is a statistic,” he allegedly declared, according to the International Business Times.

Though it’s difficult, it’s also crucial to view data about how many people Stalin killed with great empathy. Whether he killed six million or 60 million, each life meant something. They were not statistics — they were human beings, murdered at the hand of a Soviet dictator.

After reading about how many people Joseph Stalin killed, delve into the story of how the dictator tried to assassinate John Wayne. Or, learn about the tragic life of Stalin’s son, Vasily Stalin.