The Surreal Reality Of HR Giger

Chances are that half the sci-fi movies you've ever seen have been inspired by HR Giger's artwork. Get to know him. 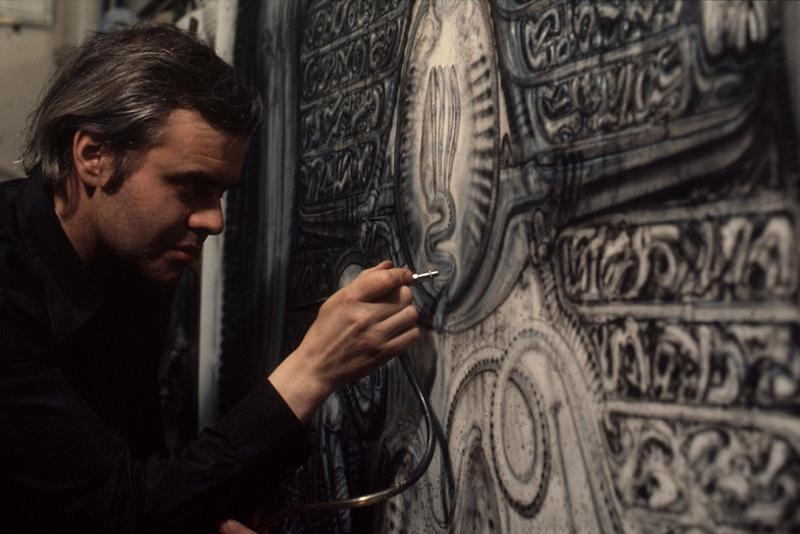 If the purpose of art is to hold a mirror up to reality and encourage us to look at the world in new and different ways, then Hans Rudolf Giger was one of the most successful artists of the 20th century. For over 40 years, from his first solo exhibition in 1966 to his 2011 death, Giger warped reality for audiences in art galleries and movie theaters around the world. His 1977 work, Necronom IV, caught the attention of director Ridley Scott and earned him a job as set designer for the 1980 film Alien.

HR Giger’s work on the film won an Oscar as well as an appreciative international following. Several books followed, as did at least two “Giger bars” built around his designs, which must be a lot of fun to drink around. H. R. Giger slipped and fell in May 2014, and died from complications in the hospital in Zurich shortly after.

A body of work like Giger’s cries out for some kind of explanation. If the man had grown up locked in a cage, or if his earliest memory was of the Joker killing his parents, then the great Gothic surrealism of his later work would make a kind of sense.

Actually, his childhood in the small Swiss town of Chur couldn’t have been more ordinary. His father was a pharmacist, and his mother was generally supportive of young Hans Ruedi’s work, even though he spent his teen years sketching pornography for his friends. Rather than a horror story of a childhood, Giger seems to have walked out of the same kind of upbringing that would later produce the Baader-Meinhof gang: bland European weltschmerz: 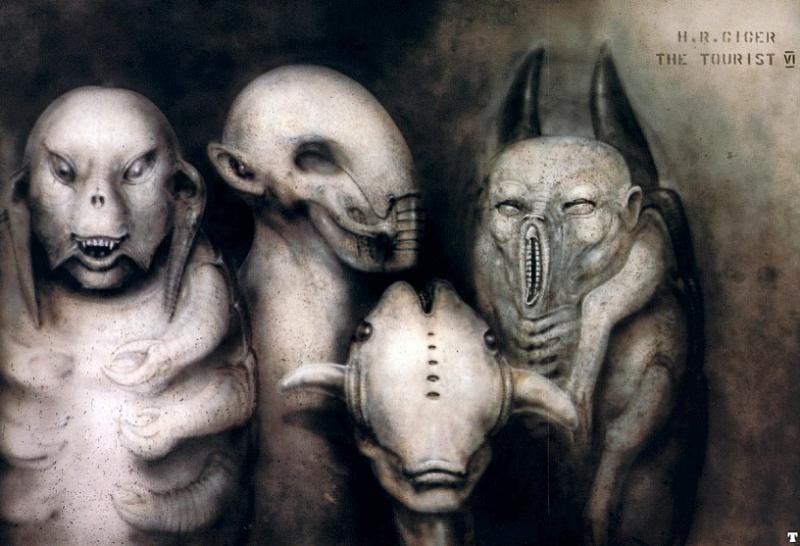 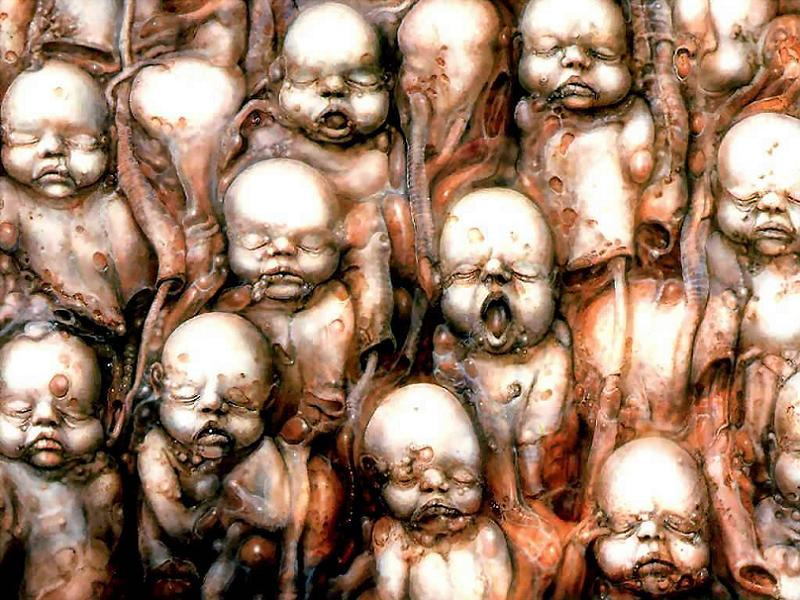 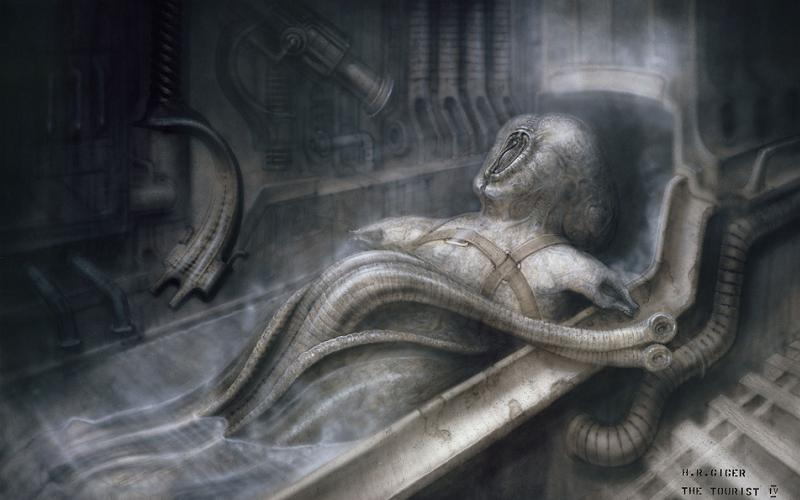 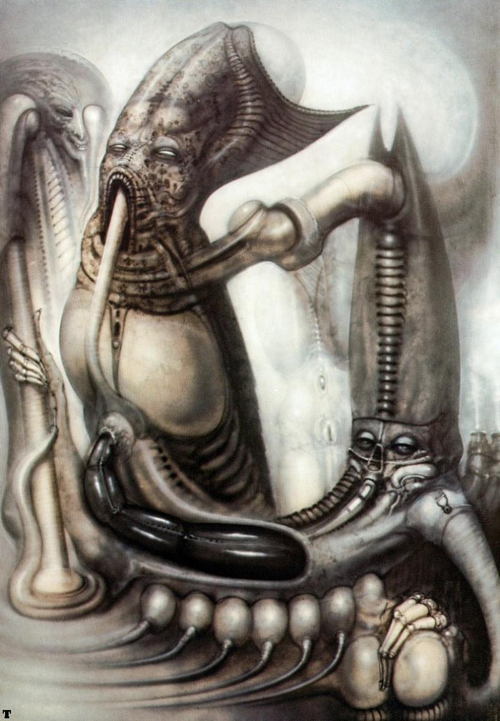 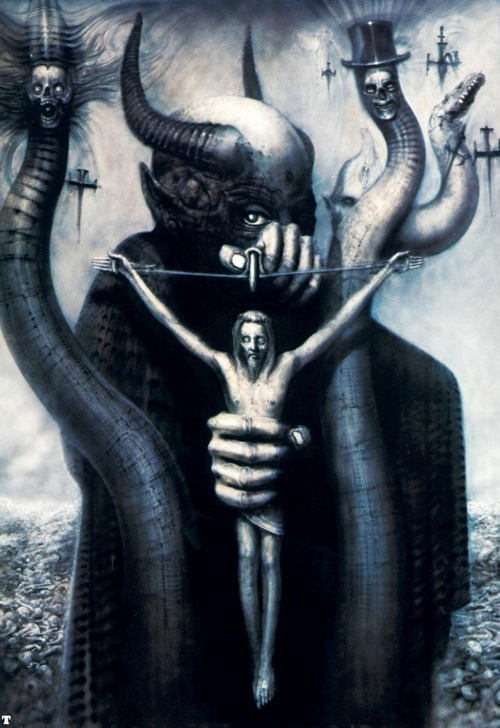 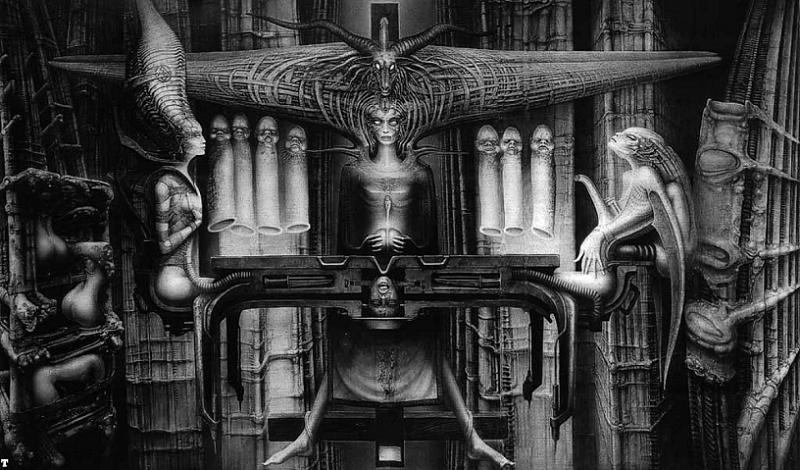 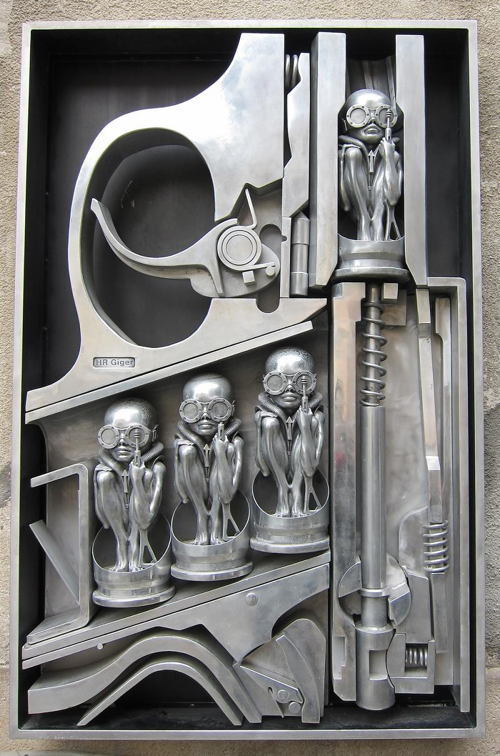 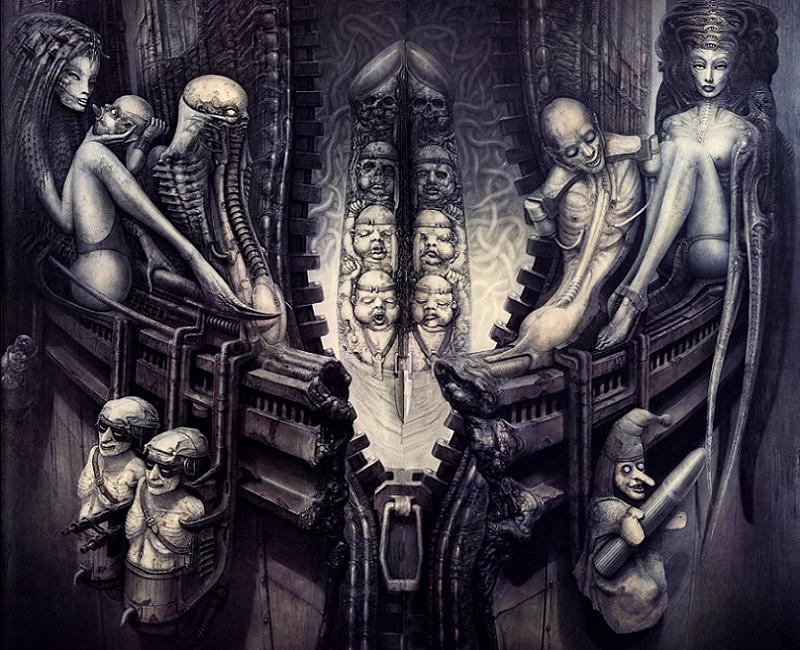 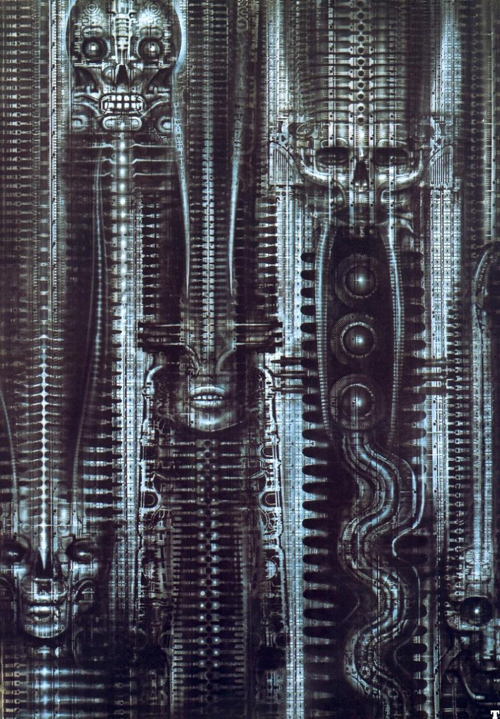 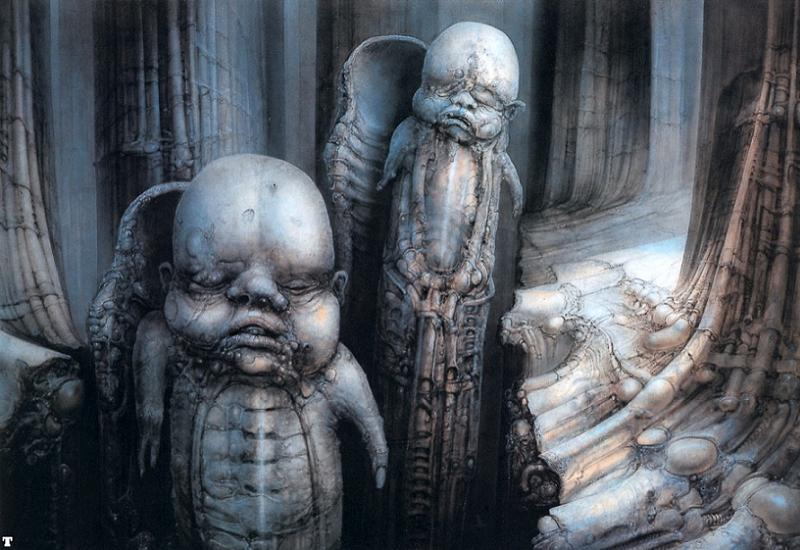 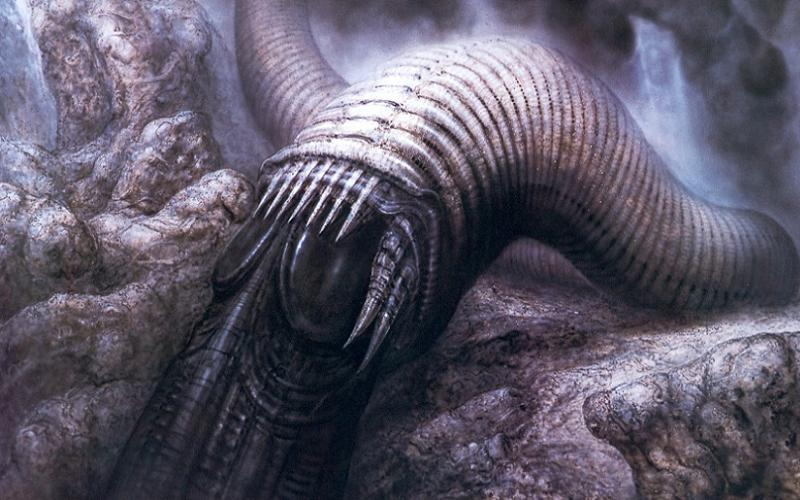 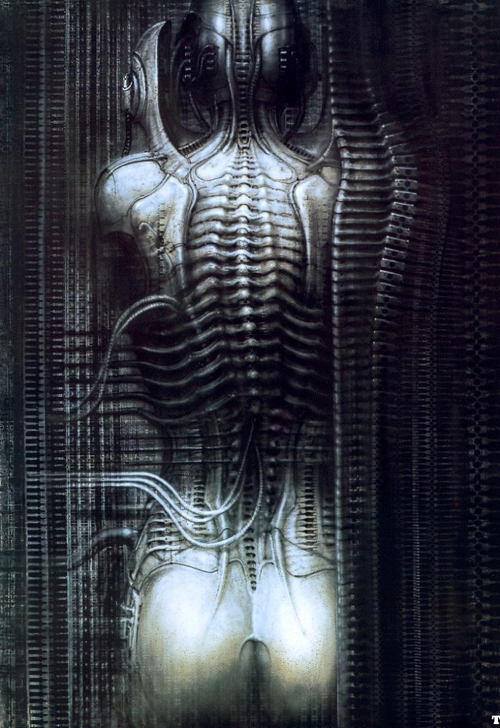 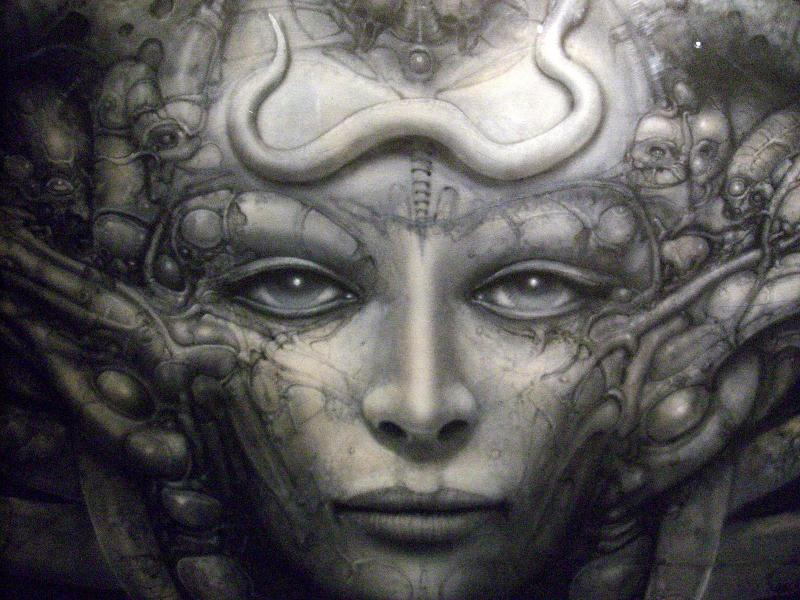 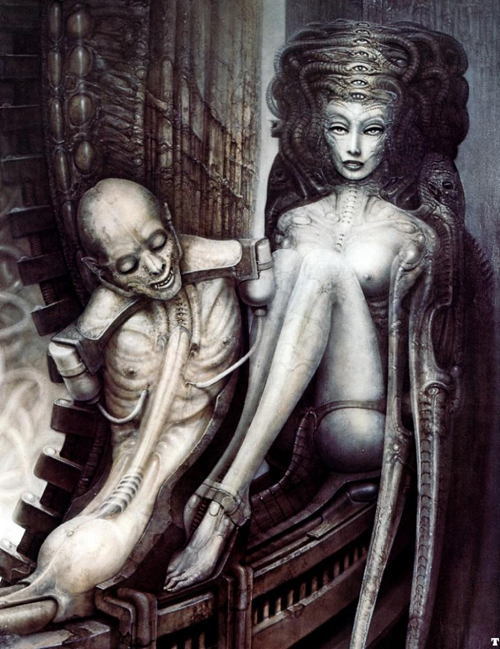 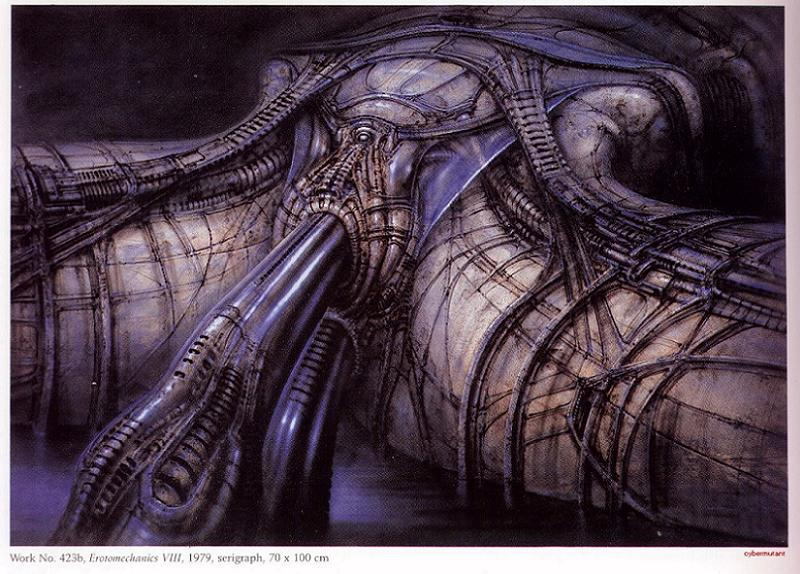 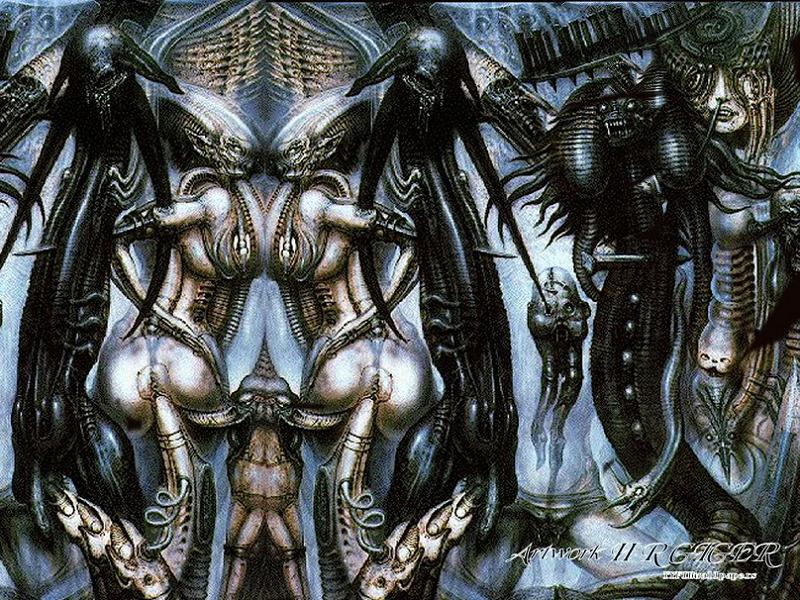 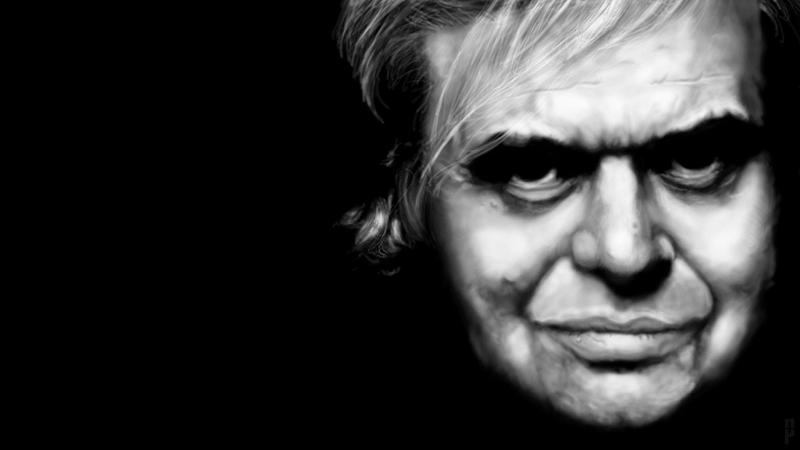 1 of 18
H. R. Giger had a knack for rendering grotesque figures that will haunt your nightmares forever. In past centuries, this would have gotten him burned as a witch. Progress! Source: NAROD
2 of 18
Source: Photobucket
3 of 18
Source: I Like To Paint Monsters
4 of 18
Source: Taringa
5 of 18
You can't give an artist like Giger a subject like the Crucifixion and not expect something like this. Your fault, really. Source: Narrative In Art
6 of 18
Source: Paul Squire
7 of 18
There's usually a lot going on in a Giger piece. This one is called Birth Machine. Source: Wikipedia
8 of 18
Source: Culture Toronto
9 of 18
Source: NAROD
10 of 18
Aside from the Alien franchise, Giger's work inspired half of the movies you've ever seen. If these babies look familiar, it probably means you remember the torture scene from Brazil. Source: Vsbl Studio
11 of 18
Or, you enjoyed Dune. Source: Deviant Art
12 of 18
. . . or you've fantasized about catching Seven of Nine in the shower. Source: World Of Art Showcase
13 of 18
Source: Tiscali
14 of 18
This as good a place as any to mention the "erotic" elements in Giger's work. Virtually everything he ever did incorporates some element of sexual organs. Source: NAROD
15 of 18
Source: Blogspot
16 of 18
Source: Wordpress
17 of 18
Source: Horror Homework
18 of 18