These brave dogs endured the destruction of Hurricane Harvey, and made it out as loyal and loving as ever. 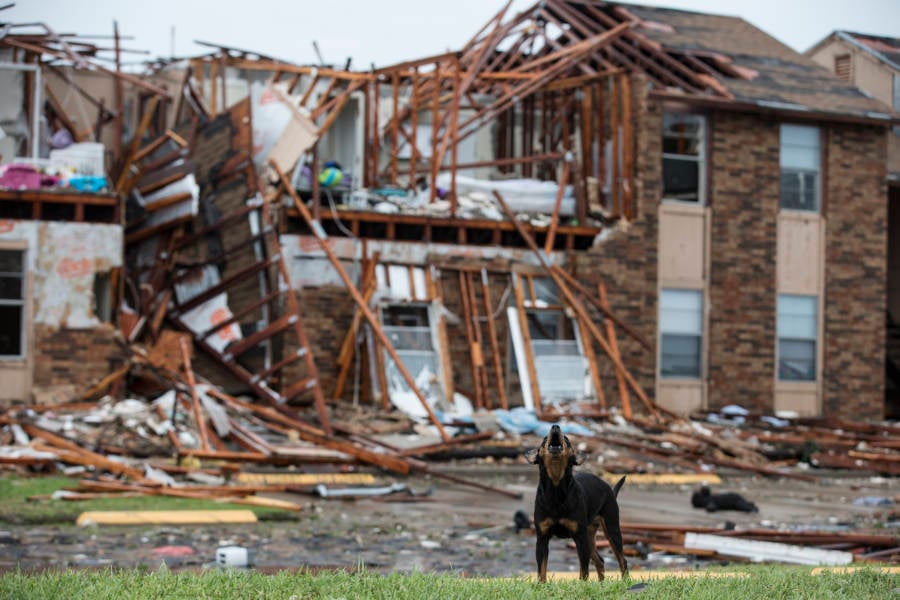 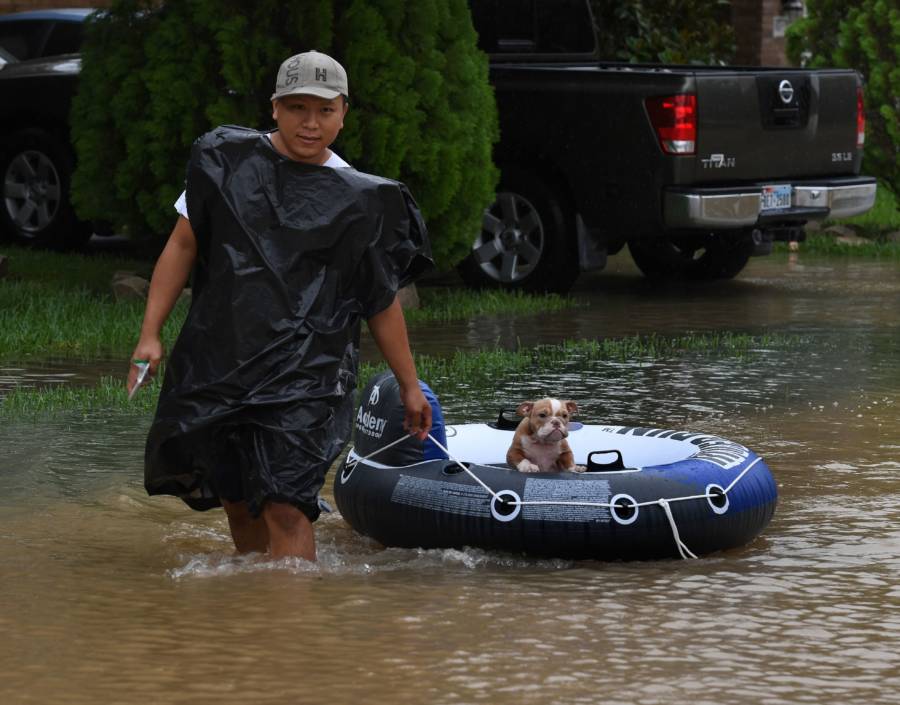 Houston resident John Tuan returns to rescue his dog who was left in his flooded house in the Clodine district. MARK RALSTON/AFP/Getty Images 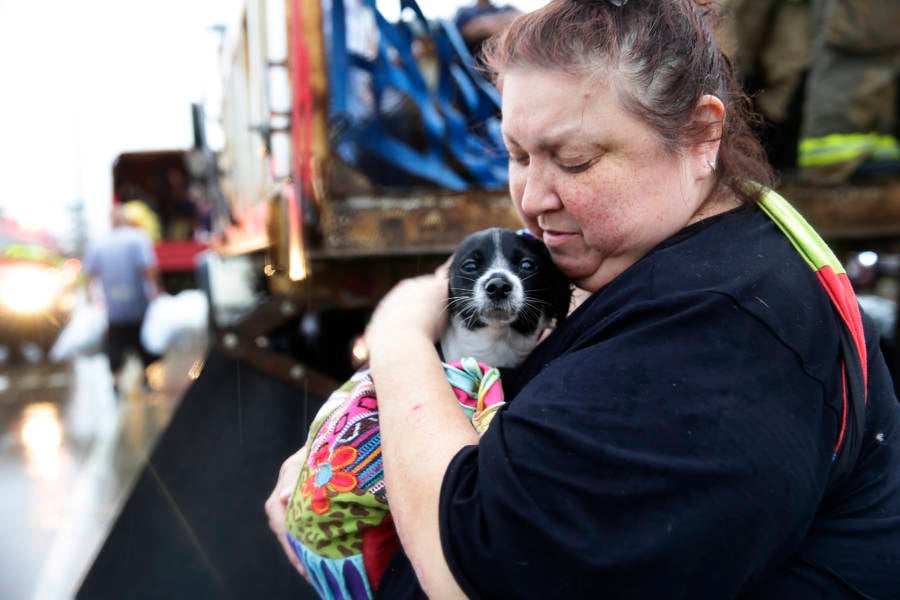 Elma Moreno comforts her dog, Simon as they are loaded on to a trucks after being evacuated from their flooded apartment.Robert Gauthier/Los Angeles Times/Getty Images 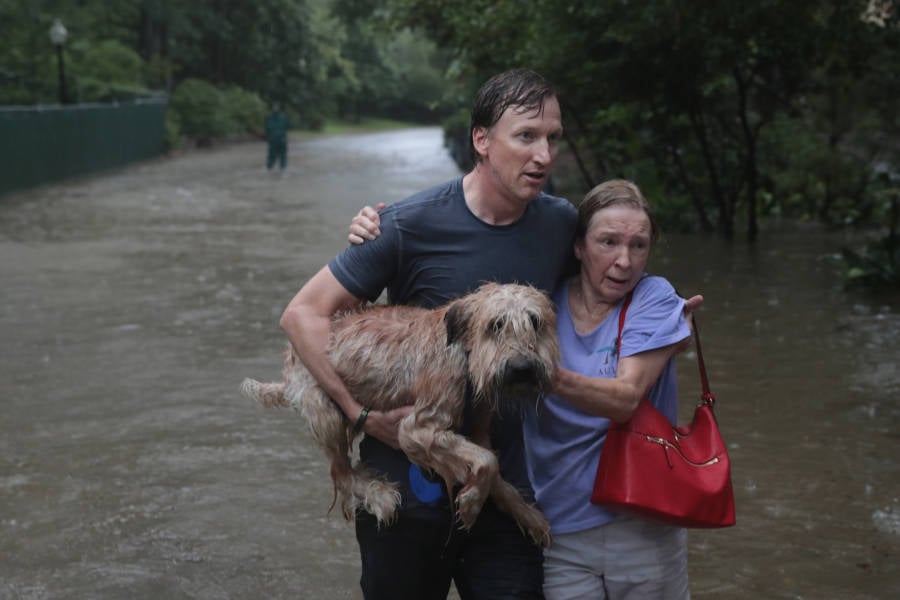 Andrew White helps a neighbor and her dog down a street after rescuing her from her home in his boat. Scott Olson/Getty Images 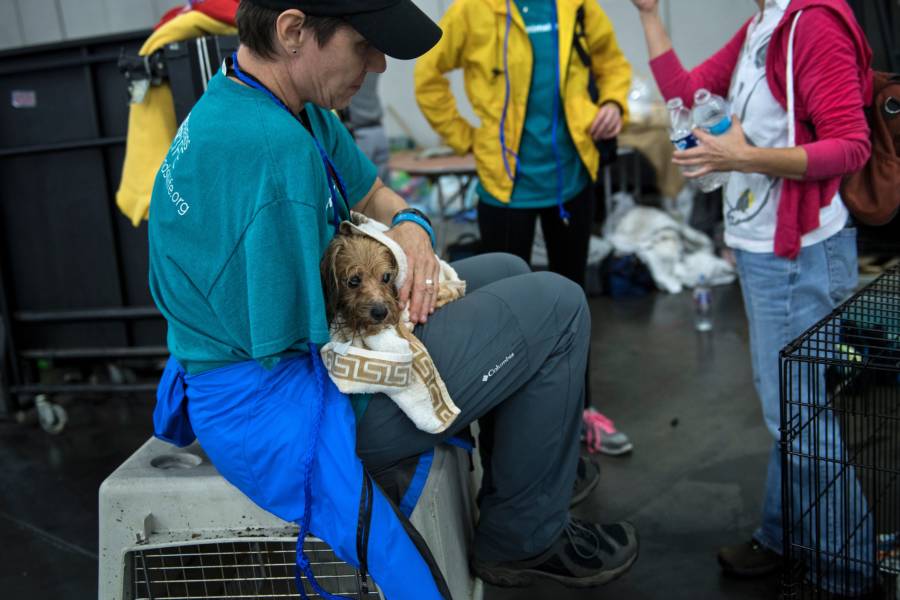 A vet holds a dog at a shelter in the George R. Brown Convention Center during the aftermath of Hurricane Harvey.BRENDAN SMIALOWSKI/AFP/Getty Images 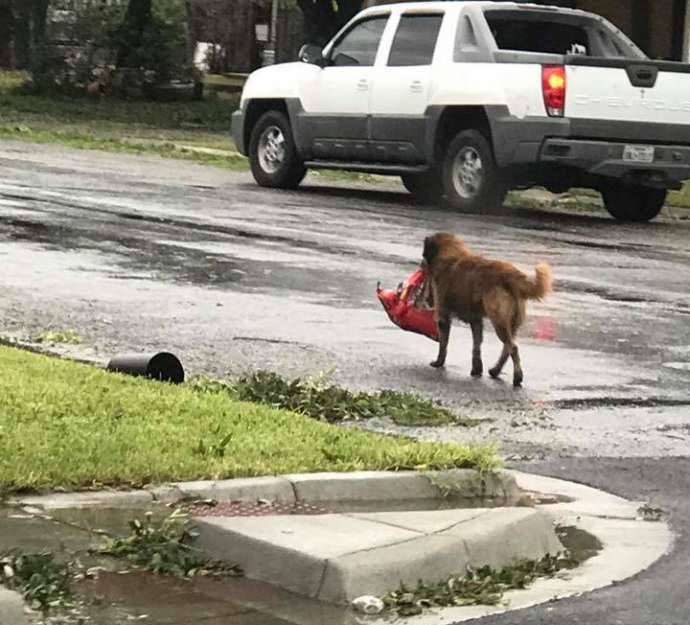 Otis the dog carries a bag of dog food with him down the streets of Sinton, Texas. Otis is already a local celebrity because he always travels around town by himself. Tiele Dockens/Facebook 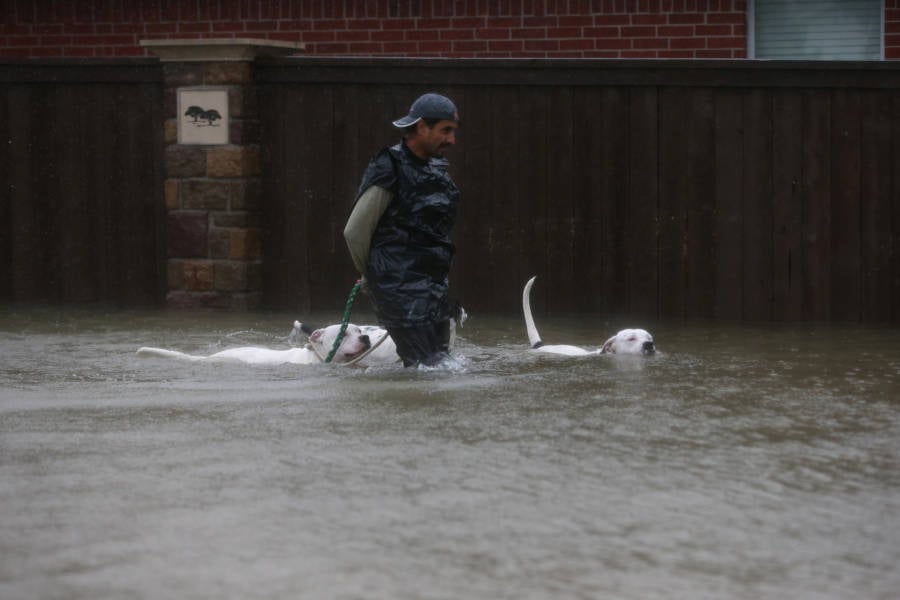 A resident of Twin Oaks Valley leads his dogs out of the flood zone. Robert Gauthier/Los Angeles Times/Getty Images 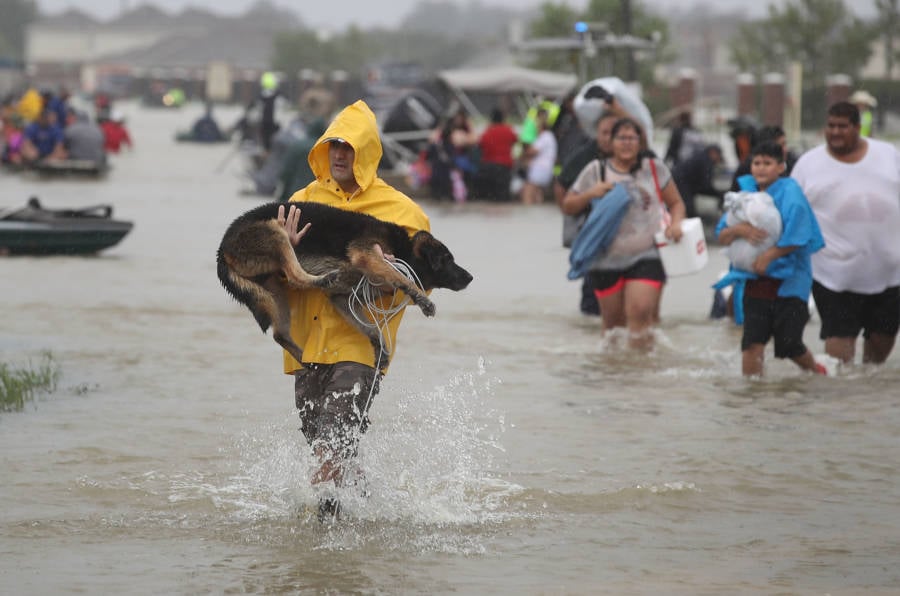 Man in a yellow poncho carries his dog across the waters during Hurricane Harvey.Joe Raedle/Getty Images 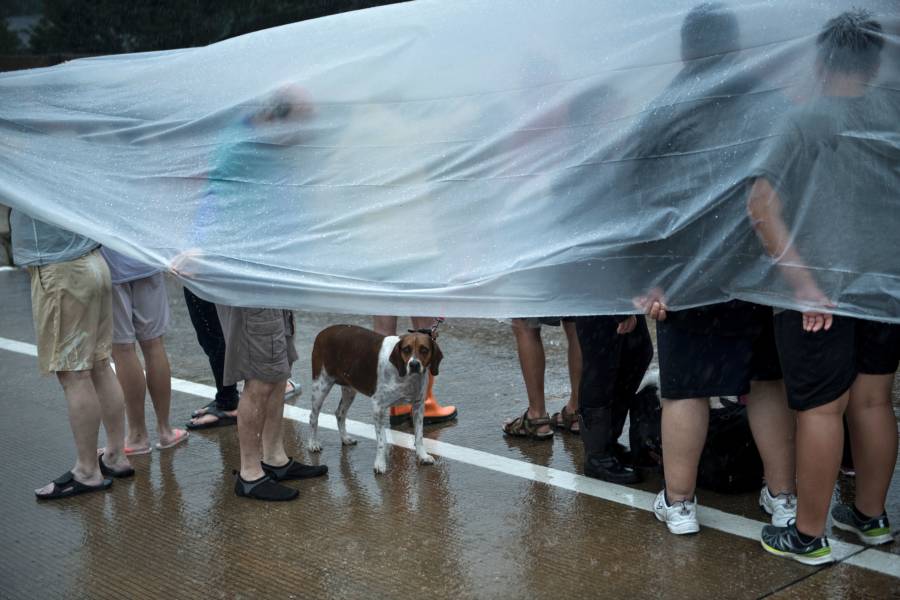 Evacuated residents from the Meyerland community wait on an I-610 overpass for further help during the aftermath of Hurricane Harvey. BRENDAN SMIALOWSKI/AFP/Getty Images 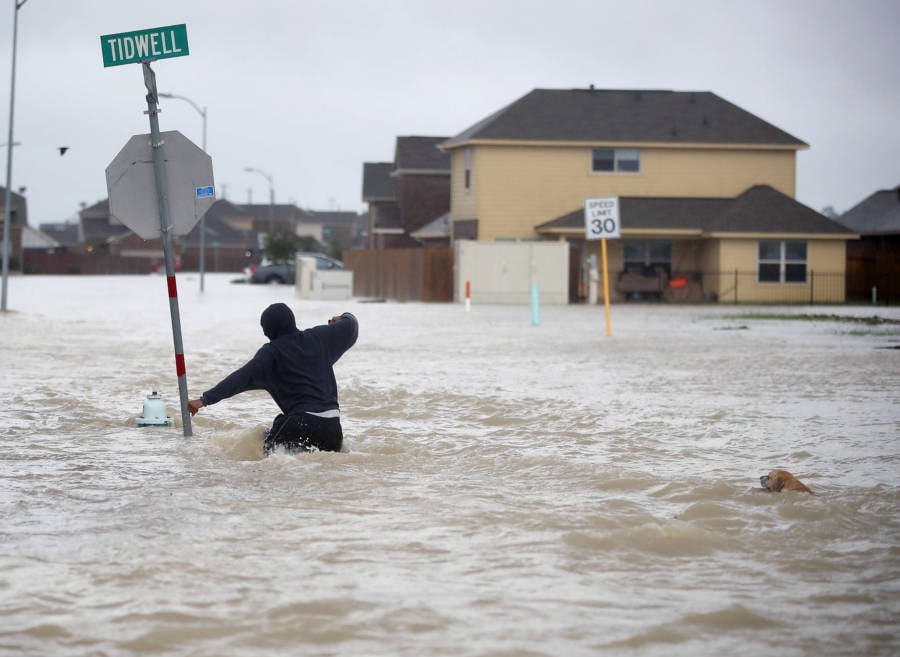 A person walks through a flooded street with a dog. Joe Raedle/Getty Images 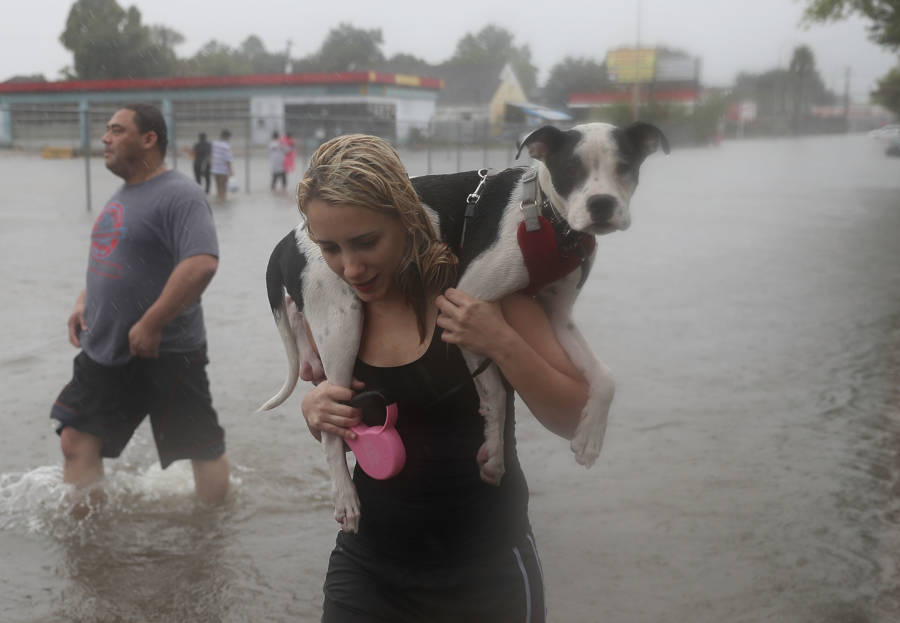 Naomi Coto, a survivor of the hurricane, carries her dog Simba on her shoulders as they evacuate their home.Joe Raedle/Getty Images 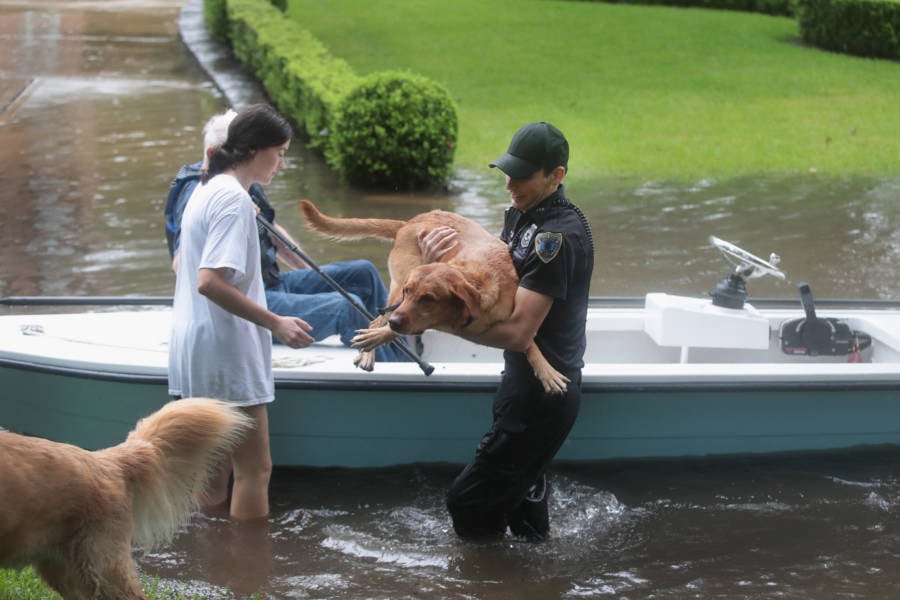 Volunteers and officers from the neighborhood security patrol help to rescue residents and their dogs in the upscale River Oaks neighborhood after it was flooded.Scott Olson/Getty Images 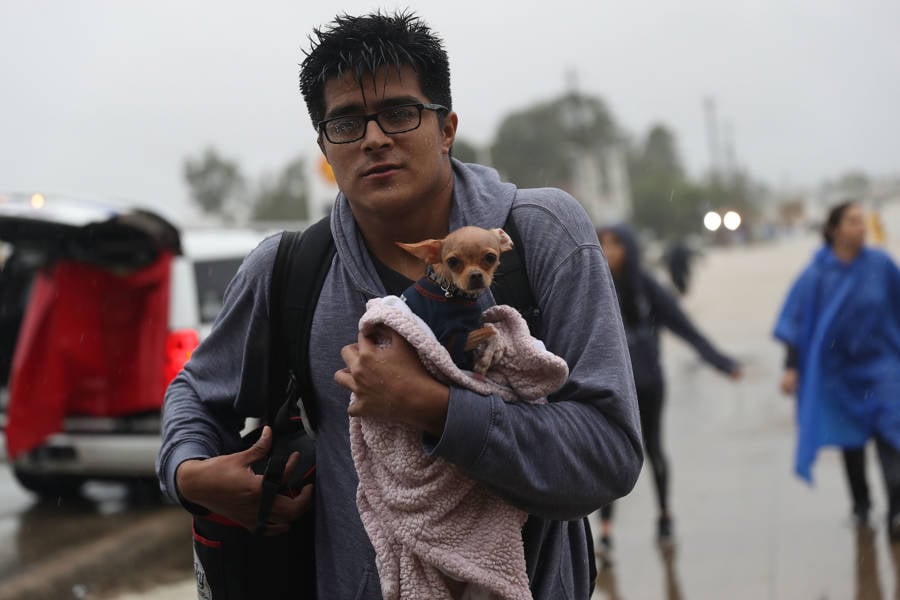 Evacuee and his dog make their way to dry land after leaving their home. Joe Raedle/Getty Images 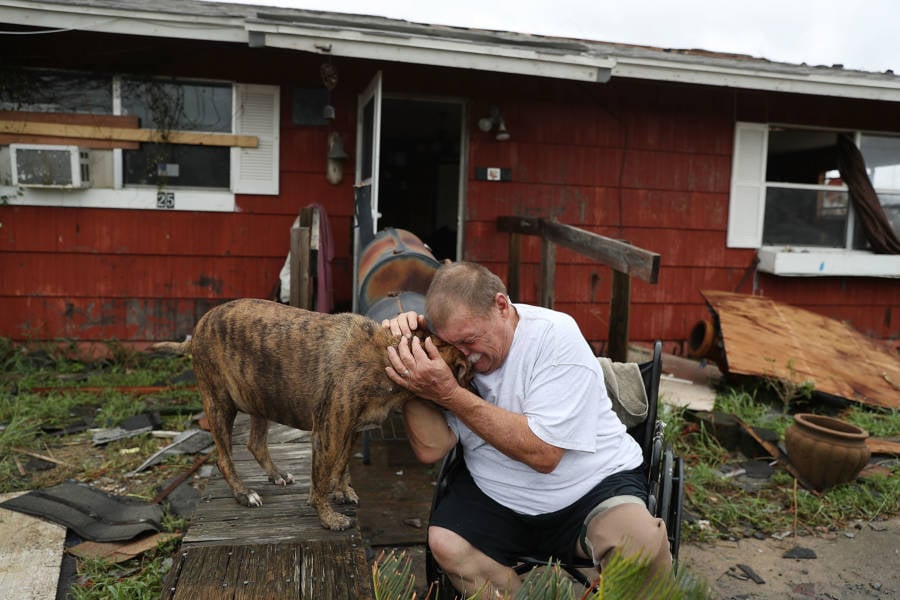 Steve Culver cries with his dog Otis as he talks about what he said was the, "most terrifying event in his life," when Hurricane Harvey blew in and destroyed most of his home while he and his wife took shelter in Rockport, Texas. Joe Raedle/Getty Images 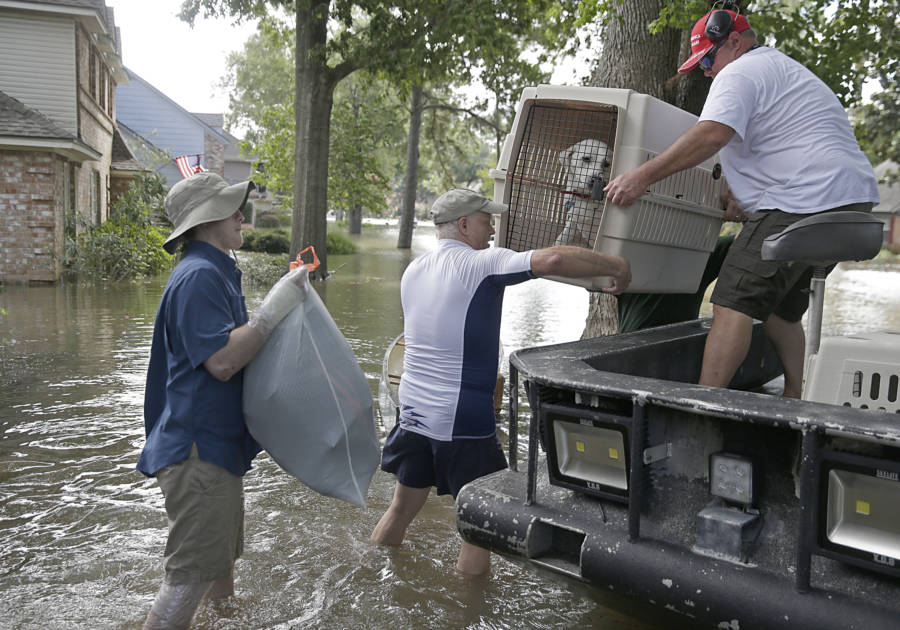 A father and son carry their dog as they evacuate from their homes the flood in Lakeside Estate in Houston, Texas.THOMAS B. SHEA/AFP/Getty Images 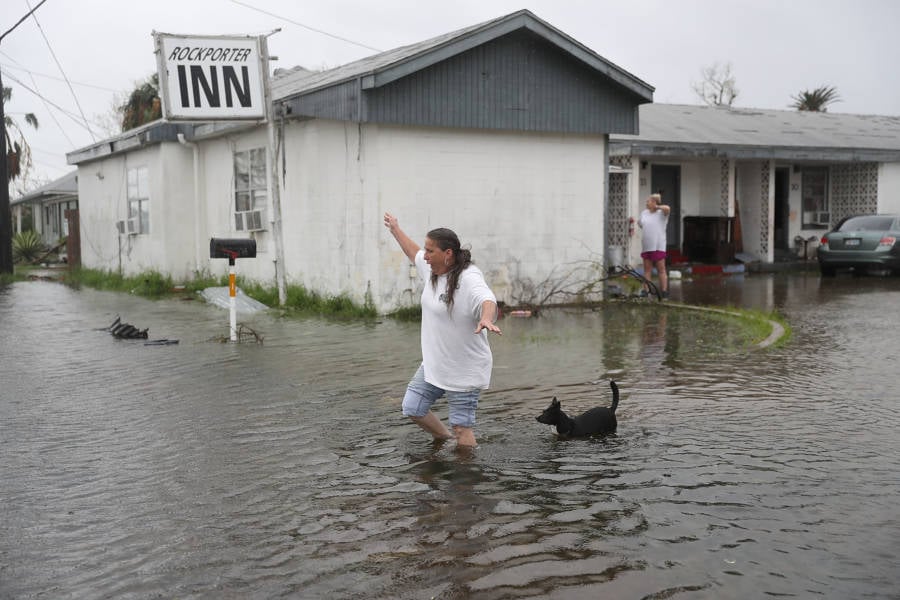 Valerie Brown walks through a flooded area with her dog after leaving the apartment that she road out Hurricane Harvey in. Joe Raedle/Getty Images 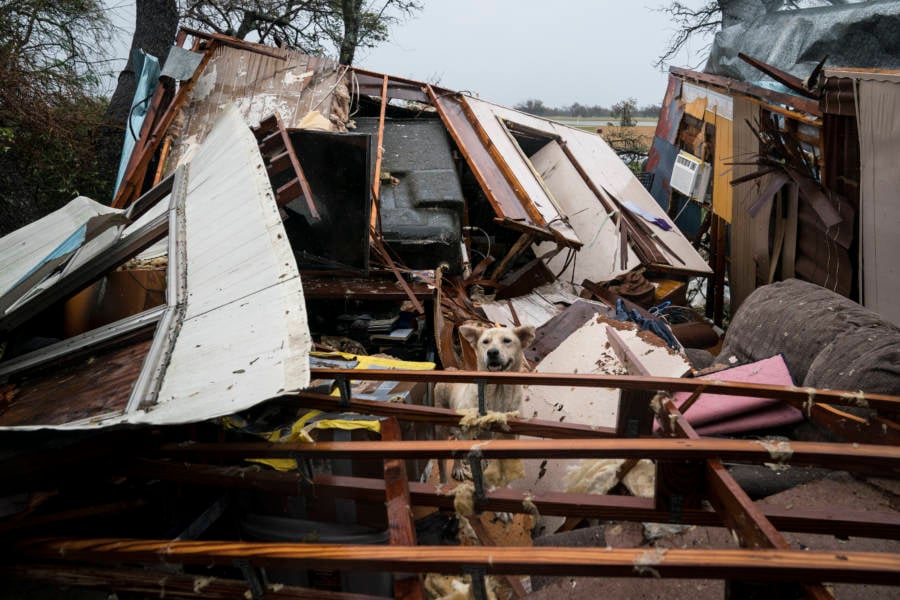 A dog watches as Nahan Valdez gathers supplies out of his destroyed home to take back to a shelter near City-By-The Sea, TX. Jabin Botsford/The Washington Post/Getty Images 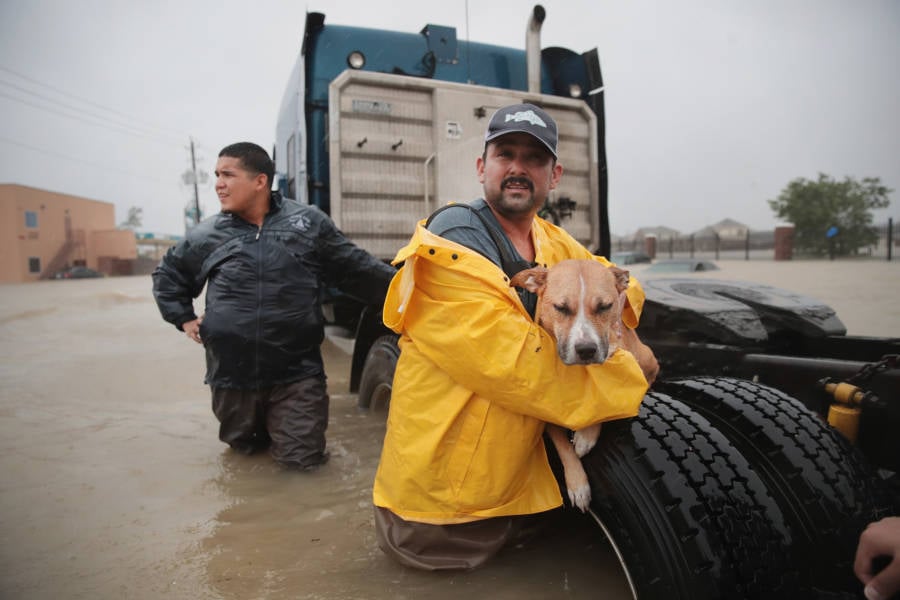 Man and his dog make their way out of a flooded neighborhood.Scott Olson/Getty Images 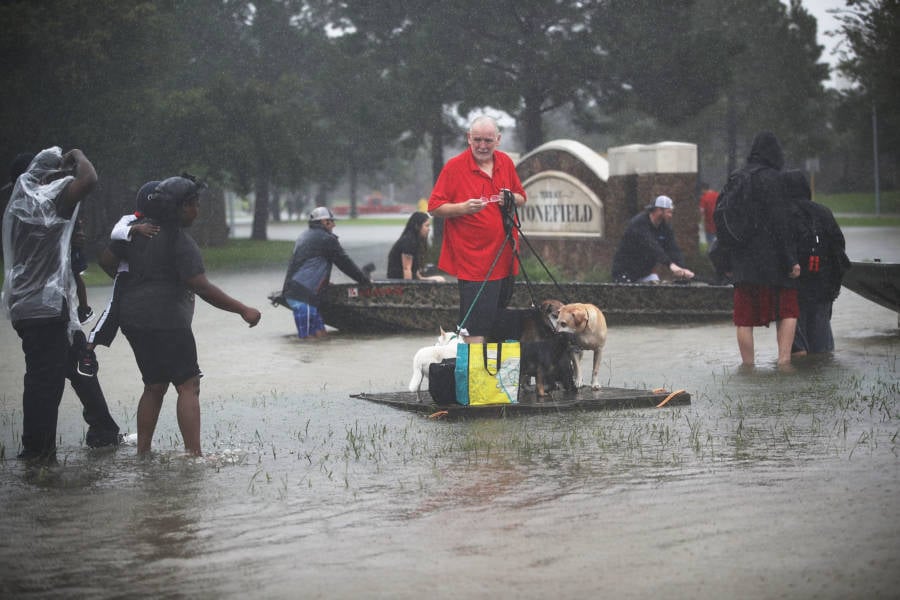 Man and his dogs wait for a rescue boat on a raised platform. Joe Raedle/Getty Images 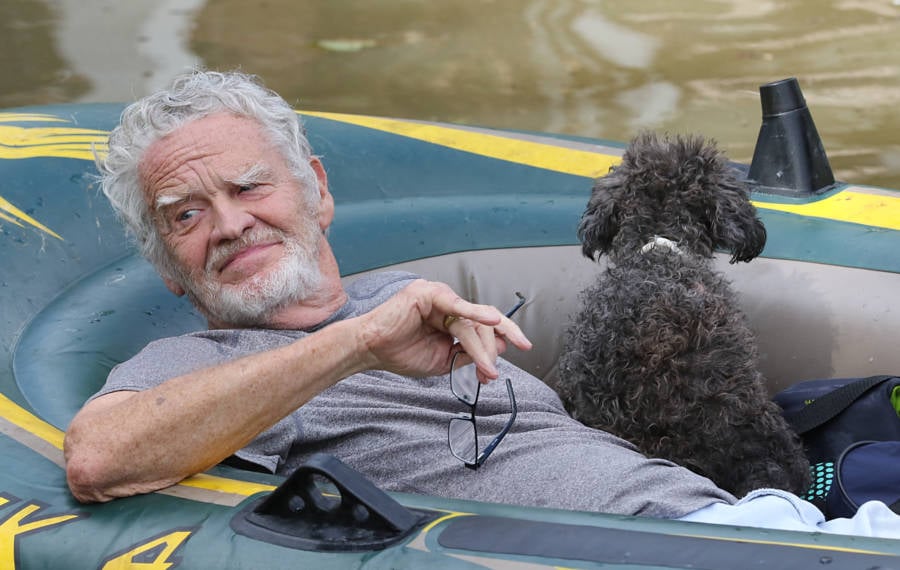 A man and his dog evacuate the flood waters in Lakeside Estate by boat. THOMAS B. SHEA/AFP/Getty Images 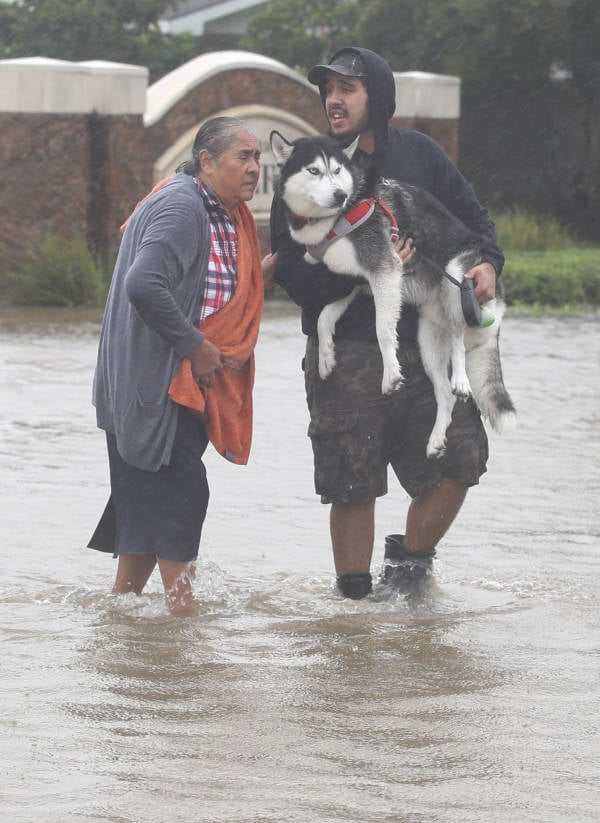 A man and his dog evacuate their home in Houston, Texas. Joe Raedle/Getty Images

As man's best friend, dogs often have to endure the same tragedies that humans go through.

In the midst of the devastation of Hurricane Harvey, many people not only had to ensure their own safety, but that of their beloved dogs as well. They helped their pets get on rafts and floatation devices, and even carried them on their shoulders, all to make sure that their family members made it out ok.

Many dogs were inadvertently left behind in the panic was that was the evacuation of Houston. Thankfully, vets and volunteers stepped up to save as many dogs as they could, getting them to shelters and comforting the scared pooches.

The Hurricane Harvey dogs also served to help people through this difficult and trying experience, comforting their owners and helping them feel better about the horrifying events that had come to pass. Here are 18 photos of some of the brave dogs who made it through this terrible ordeal.

Next, read about how the Amazon Alexa can read audiobooks to your dog while you're away. Then, learn about how feral bunnies are taking over Las Vegas.