Is There Life On Mars? Inside Humankind’s Long Quest To Find Out

As soon as humans had telescopes strong enough to study Mars in detail, we've asked ourselves two questions: Does Mars have life? How can we establish contact? 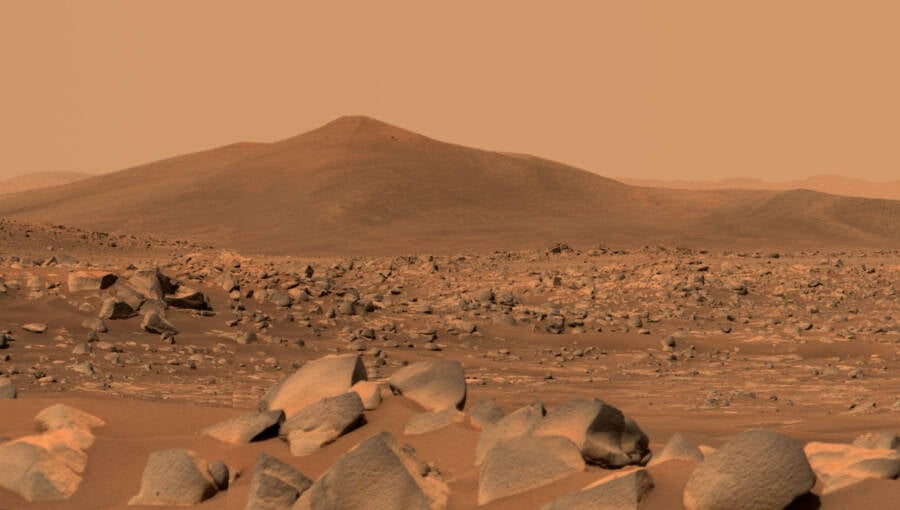 The question has echoed through the ages: “Is there life on Mars?”

First tracked in the sky by ancient people thousands of years ago and now being observed by a cosmic helicopter, the “Red Planet” has nonetheless remained elusive to us. But Earthlings today remain perhaps the most curious about the possibility of alien life on Mars — and how humans might one day settle there.

From theories about Martian canals to alien radio messages, here’s how humans have thought about life on Mars over time — and how some have even tried to reach out to their Martian brethren.

Alien Canals And Early Theories About Life On Mars 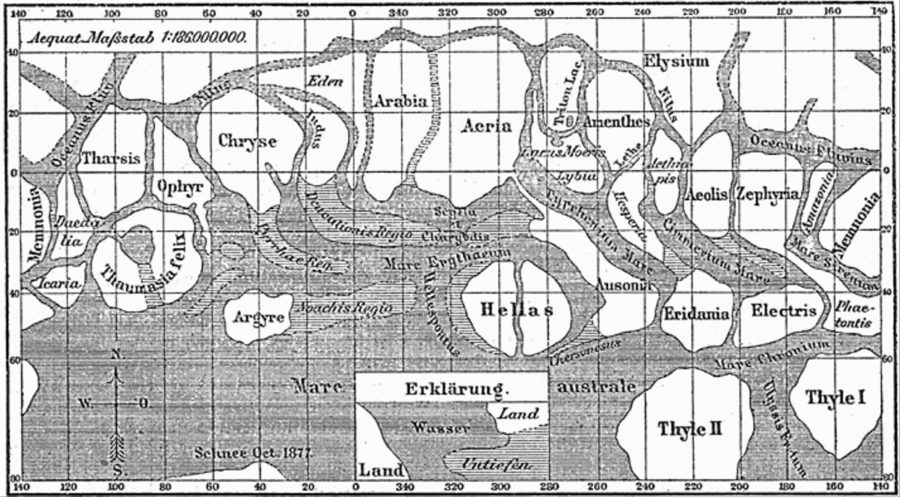 Wikimedia CommonsGiovanni Schiaparelli’s map of the “canals” on Mars.

Mars appears often in ancient texts as a “fire star” or as representing the god of war. In the 17th-century, early telescopes even allowed scientists to get a glimpse of the Red Planet.

But it took more powerful telescopes for astronomers to get a close look — and for theories about life on Mars to take off.

In 1877, the Italian astronomer Giovanni Schiaparelli noticed crisscrossing lines covering the Red Planet. He called the lines canali, meaning “channels.” Schiaparelli wasn’t convinced these were the product of alien life. But others certainly were.

As word spread, “canali” was translated as “canals.” And if there were canals — wouldn’t that suggest that there were also aliens digging them? Many came to believe that the lines across Mars’ surface were a magnificent planet-wide system of waterways.

Such a system might suggest that Martians not only existed but were also incredible engineers. On Earth, it had taken humans 10 years to finish the Suez Canal in 1869. The Martians’ accomplishments thus appeared to be far superior to what humans had accomplished.

Percival Lowell certainly thought so. In 1894, the budding astronomer began to expand on the concept of Martian canals. Lowell used his family’s textile fortune to open the Lowell Observatory in Flagstaff, Arizona. 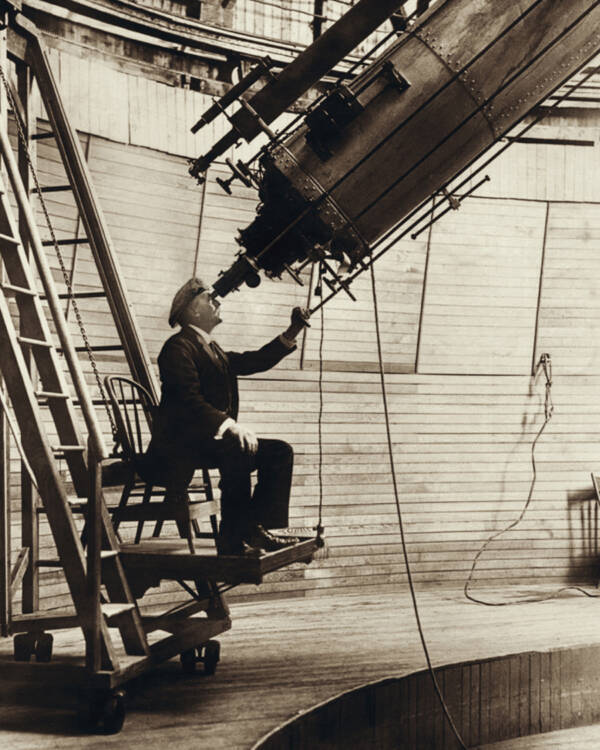 Wikimedia CommonsPercival Lowell mapped the canals of Mars with the help of his 24-inch Alvan Clark & Sons refracting telescope at the Lowell Observatory.

He drew meticulous maps of what he observed on Mars’ surface, wrote numerous books, and lectured frequently on his shocking theory that Martians existed — and were trying to irrigate their dying planet.

Lowell offered logical explanations for how and why life should exist on the planet, using life on Earth to illustrate his argument:

“When it had thus been conclusively proved that no life could exist at the bottom of the sea, deep-sea dredges were invented, and no sooner were they let down than, behold! they came up teeming with life. Fish and crustacea, mollusks and echinoderms—life, in short, of all the usual pelagic kinds from protoplasmic molecules to marine monsters—were found to inhabit the abyssal depths. What could not be, just was.”

Mapping the Red Planet was one thing. But scientists would soon try to make contact with any life on Mars that might exist.

Reaching Out To The Red Planet

In 1899, Lowell’s theory about life on Mars received a boost from a prominent scientist: Nikola Tesla. Tesla, then a successful electrical engineer, claimed that he had detected an “inexplicable, faint” signal originating from Mars. 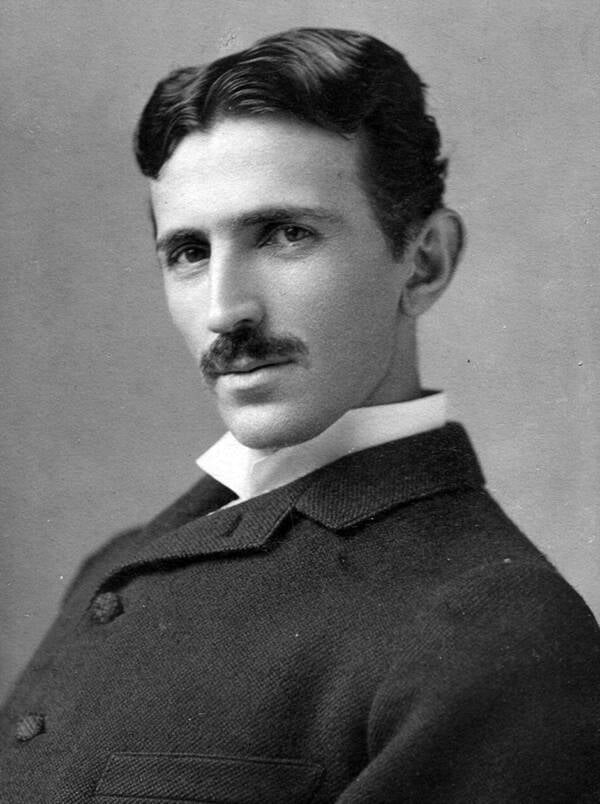 While conducting experiments with his magnifying transmitter at the high altitude of Pike’s Peak in Colorado Springs, Tesla allegedly received “a message from another world, unknown and remote.”

What did the message say? According to Tesla, it read simply: “ONE—TWO—THREE.”

A few years later, in a February 1901 interview with Collier’s Weekly, the inventor claimed that he could contact Martians by accurately sending wireless messages to any point on the Red Planet.

This was quite the statement — as successful radio messages on Earth would not take place until December of that year.

Tesla didn’t know what alien beings might look like, but he was convinced that it was possible for them to have adapted to the harsh conditions of Mars. Like Lowell, he thought it “possible that in a frozen planet, such as our moon is supposed to be, intelligent beings may still dwell, in its interior, if not on its surface.”

For many, it seemed logical that if humans could receive messages from Mars, then they could probably send them, too. 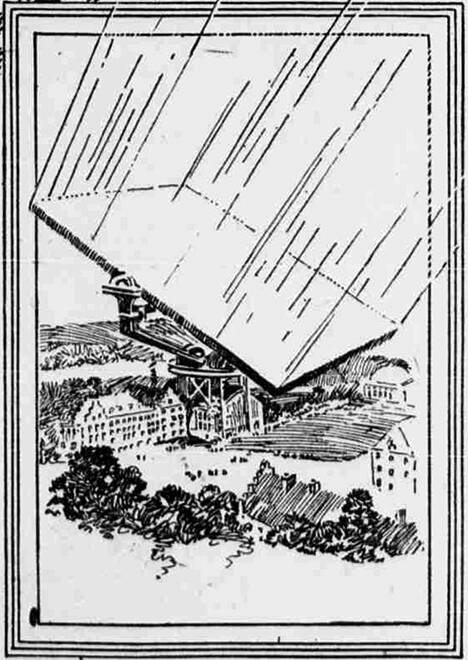 Library of CongressAn illustration of one of Professor Pickering’s giant mirrors, which he believed could send flashes of light detectable by Martians.

In 1909, several attempts were made at making contact with life on Mars. Harvard professor William Henry Pickering proposed sending the planet light signals through a series of reflections created by a massive grid of 50 giant mirrors.

The flashes of light would continue for several years, allowing time for Martians to develop the necessary means to respond. “In hoping to get such signals back,” Pickering said, “we must assume, of course, that the Martians, if there are any, have telescopes, eyes, etc., just as human beings have on this Earth.”

But Pickering’s plan cost $10 million dollars — and no one seemed to want to fund it.

Then, a John Hopkins professor named Robert Wood suggested covering the white alkali plains of Nevada with enormous black spots made from four square miles worth of cloth, instead.

“It would be as easy to ‘wink’ signals with the black spot as with a mirror of equal size, probably easier,” Wood reasoned.

But his plan, like Pickering’s, was foiled by a lack of funding. 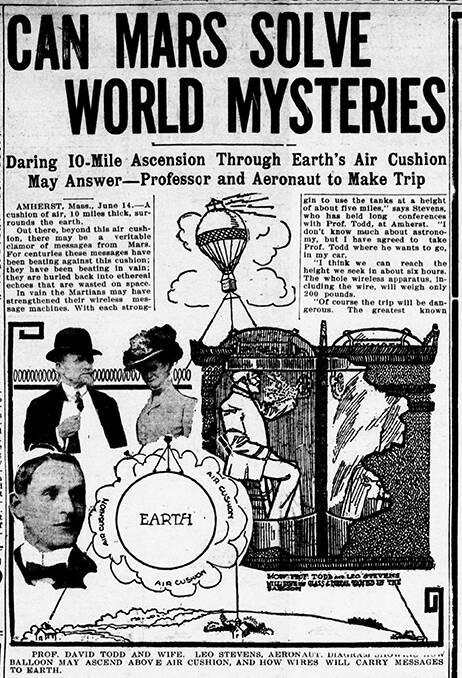 Another professor, David Todd of Amherst, thought that by taking a hot air balloon up 50,000 feet he could receive any Martian messages.

“If life really exists on Mars, they have been trying for years to get into a conversation with us, and perhaps wonder what manner of stupid things we are not to respond,” Todd said in May of that year, months before his proposed September trip.

But Todd’s test trip only reached a height of 5,000 feet. And the support that Todd had received from the War Department abruptly ended soon after — leaving the scientist without the means to get his plans off the ground.

The Bizarre Proposals Of A Martian-Loving Lawyer

Using radios, mirrors, hot air balloons, and even giant black dots to contact any possible life on Mars at least had the backing of science. But on Oct. 27, 1926, one London-based lawyer tried to send a telegram straight to Mars, 35 million miles away, where his Martian girlfriend was waiting for him.

Dr. Hugh Mansfield Robinson was confident that his message would be received. Mars was at its nearest point to Earth in its two-year orbit. Plus, Robinson claimed that he had been telepathically chatting with a six-foot Martian woman there named Oomaruru.

Library of CongressDr. Hugh Mansfield Robinson’s attempts to prove there is life on Mars made headlines around the world, including this one from The Evening Star. Oct. 29, 1926.

According to Robinson, Oomaruru and her fellow Martians lived somewhat like Earthlings, driving in cars and smoking pipes. But, he claimed, they also darted through the skies in electric airships and ate fruit from electrified trees.

For months prior to his transmission, Robinson worked with the London Central Telegraph Office to send a physical message to his Martian girlfriend. Incredibly, the Telegraph Office agreed to fire off a telegram from Rugby Tower, the world’s most powerful wireless station at the time, for its standard long-distance rate: 18 pence per word, or about 35 cents.

Though telegraph clerks heard no response, Robinson claimed he heard telepathically from Oomaruru, who told him that the Martians “were sitting up for hours to receive signals. They laugh at our scientists because they themselves have got rid of atmospheric troubles altogether, and yet we have not.”

The Current Search For Life On Mars 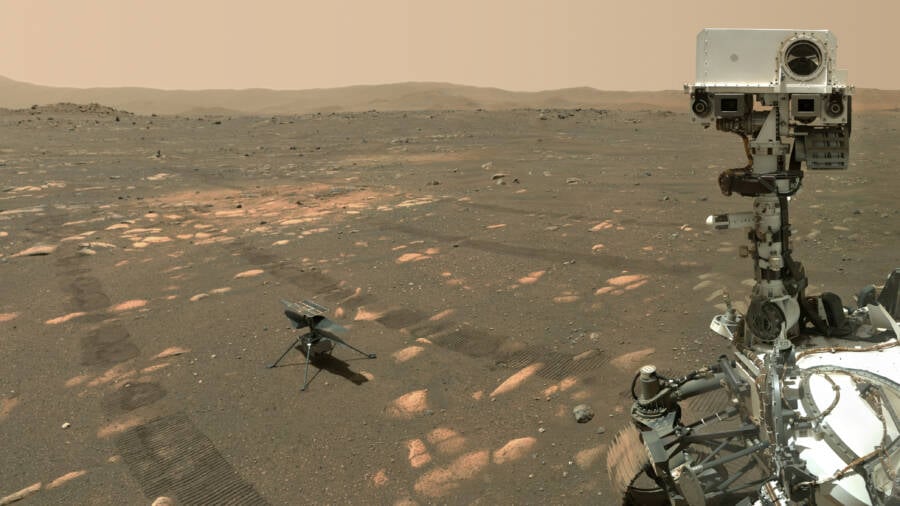 Even though Robinson didn’t have any luck, as I describe in my book, The Big Book of Mars: From Ancient Egypt to The Martian, A Deep-Space Dive into Our Obsession with the Red Planet, he wasn’t alone in his grand endeavors.

The ideas of previous scientists may seem far-fetched, but their curiosity and unrelenting pursuits inspired the generations that followed.

By 1976, NASA brought the search for life on Mars to the actual surface of Mars via two Viking landers. One of the landers’ metabolic response experiments even revealed positive results, meaning some kind of organism consumed a nutrient put into a soil sample, suggesting there could be life on the Red Planet. However, those results remain controversial to this day.

Subsequent explorations by rovers have provided evidence that Mars may have once been hospitable to life. For example, the Curiosity rover, which landed in 2012, explored a mountain situated in the middle of Gale Crater on the Red Planet called Mount Sharp.

The 16,000-foot elevation is built from layered sedimentary rock, made from different minerals and created over time by wind and water, two elements that require an atmosphere in order to exist.

Scientists believe that if there was once an atmosphere, then perhaps microbes existed billions of years ago while these layers were being formed and the planet may have been habitable for about a million years.

Most recently, NASA’s Perseverance rover was launched on July 30, 2020, and touchdown was confirmed on February 18, 2021. Any discoveries will likely be microbial — but no less remarkable than the canal-digging engineers we once hoped to find.

Now that you’ve learned about all the ways we tried to contact and prove there might be life on Mars, learn about NASA’s bold new plan to make Mars habitable. Then, learn about Dubai’s plan to build a city on the Red Planet.

Marc Hartzman
Marc Hartzman is the author of seven books, the founder of WeirdHistorian.com, and a creative director in the advertising industry.
You might also like
Remove Ads
×
Follow hu On