From Celebrated TV Cowboy To Convict: The Tragic Demise Of James Stacy

James Stacy was nominated for two Emmys despite having become a double-amputee in 1973. But this reputation was tarnished by his 1995 conviction. 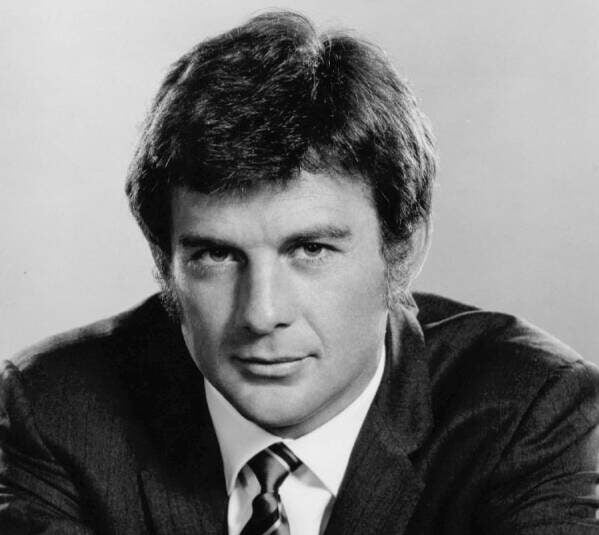 Wikimedia CommonsJames Stacy enjoyed fame as a beloved Western TV actor before the tragic accident that made him a double-amputee.

James Stacy was a popular Western TV star during the 1960s. His most famous role as the brother to Wayne Maunder’s character in the Lancer cowboy series seemed to prepare him for a career in stardom. Indeed, he managed to turn a tragic motorcycle accident in which he lost both his left arm and leg into an opportunity and was nominated for two Emmys for it. But Stacy’s path would not get any easier from here as his personal life was too turbulent. In fact, it would bring his name and career to a full stop with his 1995 conviction for the molestation of a friend’s child.

Stacy would serve six years in prison and fade into obscurity. But how did this rising star fall so far, so quickly? 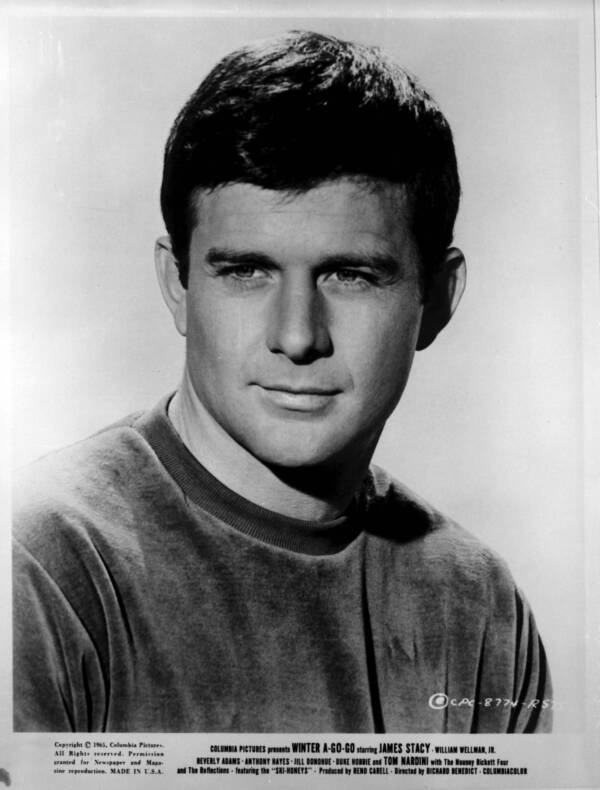 Actor James Stacy was born Maurice William Elias on Dec. 23, 1936, in Los Angeles. The second child of three siblings, he grew up in a multicultural, working-class family. His father, Louie, was of Lebanese descent and worked diligently as a bookmaker. His American-born mother, Lois, was of Irish-Scottish descent and made a living as a waitress.

He attended Glendale Community College briefly, but the wide-eyed college kid had dreams of making it big through a football career, perhaps inspired by watching his older brother, Louie Elias, who was a running back for the University of California, Los Angeles (UCLA). He dropped out of school.

An opportunity arose when the Canadian Football League drafted the college dropout. He played for the British Columbia Lions, but the team cut him after just two months. After this exceptionally short-lived football career, Elias needed to set his sights on something more attainable.

This new goal came when a friend persuaded him to take up acting classes. To support his new on-screen career, Elias adopted a sleek screen name “James Stacy,” inspired by his all-time film idol, James Dean, and his cousin Stacy.

Stacy’s first gig was starring in a Pepsi-Cola commercial. By the late 1950s, Stacy had secured but a few roles as an extra on TV shows like Highway Patrol and Sayonara. Stacy was doing reasonably well for a newcomer in the industry, and his first regular TV appearance was on the 1956 family sitcom The Adventures of Ozzie and Harriet, playing Ricky Nelson’s friend, Fred. 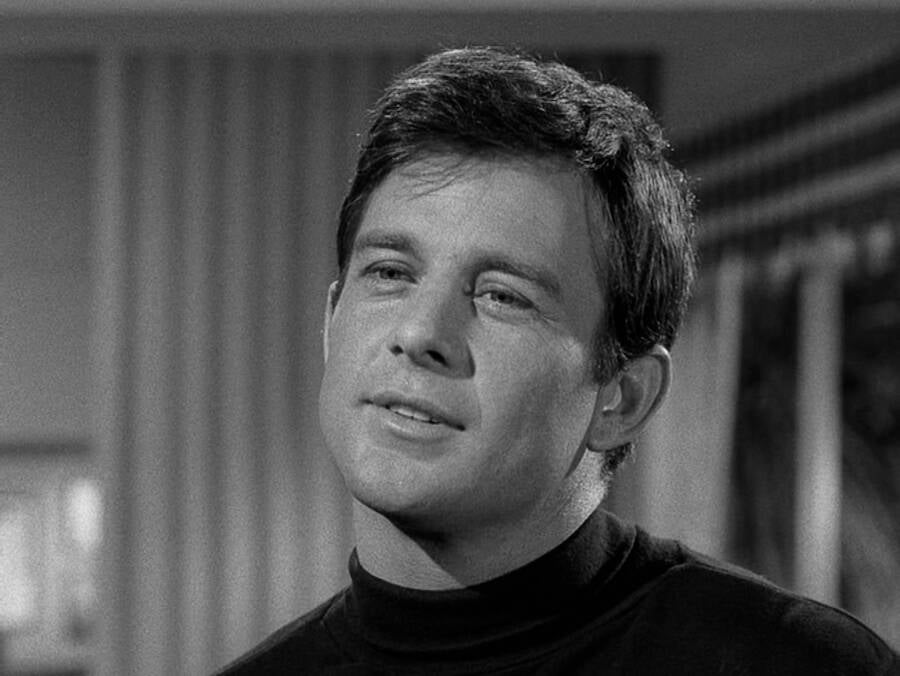 CBS via Getty ImagesJames Stacy as Barry Conrad on the Perry Mason show. Stacy enjoyed a good career as a TV star — for a time.

Stacy did manage to snag a few film roles from here. In 1963, he landed a part in Summer Magic where he met his first wife Connie Stevens — the marriage only lasted three years.

But his big break wouldn’t come until five years later with a starring role as Johnny Madrid, one of two cowboy brothers in the Western series Lancer.

The show focused on Stacy’s character and the complicated relationship he had with his brother Scott, played by Western TV star Wayne Maunder. The siblings fought off a gang of bandits and protected their family ranch.

The cowboy series struck a nerve with audiences. The New York Times called the show’s premiere “big, fast-paced and explosive with action.” But the publication questioned whether the series could generate enough drama to keep things interesting throughout the show.

James Stacy earned his industry credibility after securing a starring role as one of the cowboy brothers in TV Western Lancer.

The CBS series lasted just two seasons, until 1971. But that was enough to give Stacy some Hollywood credibility and fame. By the time the show ended, Stacy had gone through a second divorce. His marriage with actress Kim Darby had ended after just one year. He kept busy with small television roles until one fateful day in 1973.

From Rising Star To A Double-Amputee 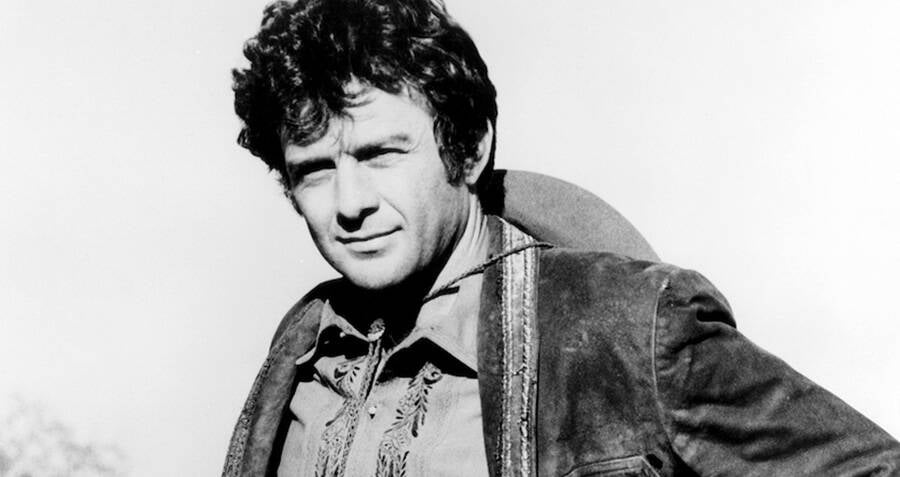 Everett CollectionStacy’s role as gun-slinging cowboy in Lancer made his career.

In September 1973, Stacy took his then-girlfriend Claire Cox out for a spin on his motorcycle, driving up Benedict Canyon Road in Hollywood. But what was supposed to be an idyllic ride turned into a nightmare within a split second after a car crashed into the actor’s bike.

Stacy miraculously survived but lost both his left arm and his left leg. Cox didn’t survive the collision. Stacy spent three months recuperating in the hospital, followed by years of learning to adapt physically and emotionally to his new life as a double-amputee.

His career also took a hit after the accident. Roles for disabled characters were scarce and movie executives were nervous about casting the actor. He said:

“[Studio executives] are weird. My agent would use Raymond Burr in Ironside as an example that audiences could accept this, but the networks would come back and say, ‘But everybody knows he’s not really crippled.'”

Fortunately, Stacy’s industry friends and ex-wives pulled through for him. They put on a gala and raised over $100,000 to cover his exorbitant medical bills, in addition to the compensation he won in court because of the accident.

It seemed Stacy may be on the rise again when his career got a much-needed bump in 1977. His good friend, actor Kirk Douglas, cast him in the film Posse which featured a role written specifically for Stacy.

The action-packed original trailer for Posse.

However, it was his starring role as Kenny Briggs in the 1977 TV movie Just a Little Inconvenience that really put Stacy back on everyone’s radar. His stirring performance as an angry amputee and Vietnam War veteran fueled the film’s success and gave him his first Emmy Award nomination.

“It’s the most literal type of casting, perhaps, but Stacy’s performance is powerfully commanding and straightforward,” one critic affectionately wrote.

Descent Into A Difficult Time 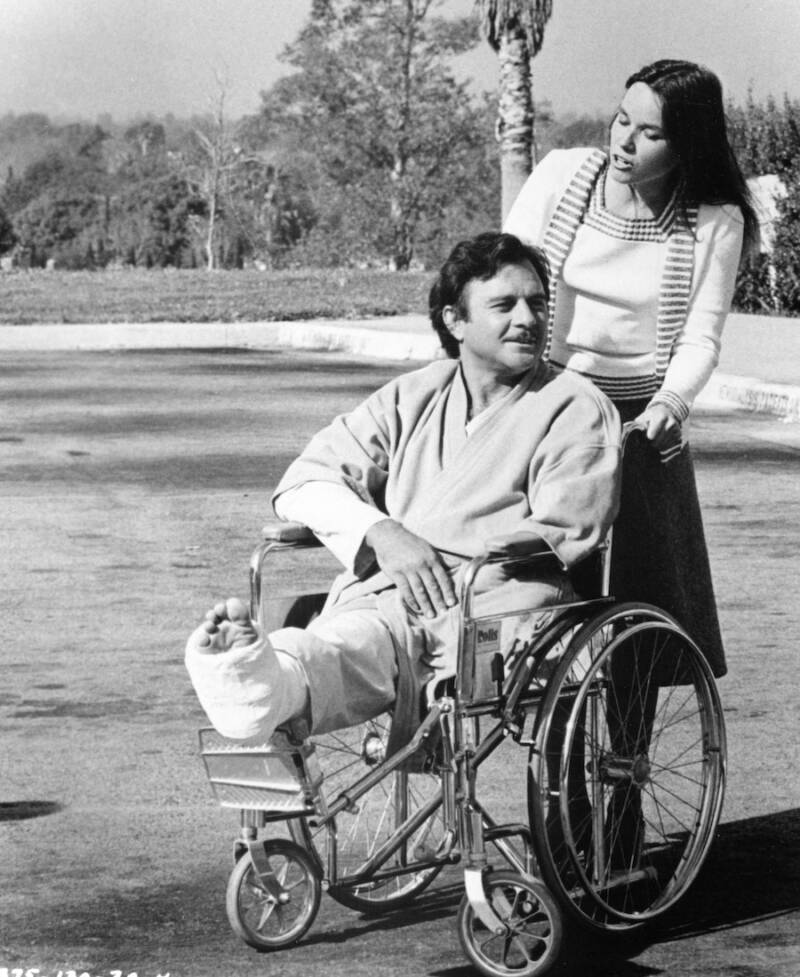 NBC via PhotofestJames Stacy in his Emmy-nominated role in Just A Little Inconvenience.

Despite appearances, Stacy had difficulties adjusting on set. He butted heads with everyone in the cast and crew, including his co-star Barbara Hershey, who was supposed to be his character’s love interest. Stacy recalled his outbursts during shooting:

“They wanted to fire me. I said, ‘How are you going to replace ME?’ They said, we’ll get somebody and tie their leg behind them and put their arm up…. I was just scared… I wanted to add a few little touches from my own experience, but I did’t go about it right, and [Director Theodore J. Flicker] wouldn’t give an inch.”

Co-star Lee Majors, who had helped Stacy to secure the role in the first place, was able to convince the two to reconcile for the sake of the film. After the success of Just A Little Inconvenience, Stacy appeared on another TV movie, My Kidnapper, My Love, and snagged other roles in ’80s shows like Cagney & Lacey and Highway To Heaven. 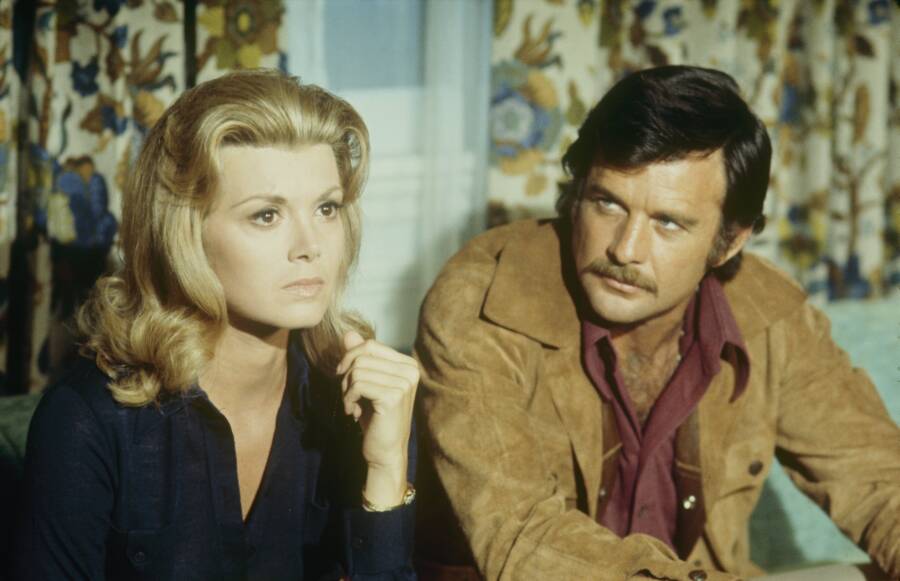 Walt Disney Television via Getty Images James Stacy with co-star Linda Marsh in Marcus Welby, M.D. It was difficult for Stacy to find acting jobs after his accident.

But amid his continued success, Stacy struggled with his physical disability. His frustration led him to serious instances of misconduct and violence off-camera. In 1980, Stacy was fined $750 and ordered to carry out 250 hours of community service after he broke a waitress’ nose at a hotel near Palm Springs. He was also put on probation and banned from drinking and being at places that even served alcohol.

From Cowboy to Convicted Felon

Stacy’s life continued its downward spiral. Five years after his retirement in 1991, he was arrested for molesting the 11-year-old daughter of a friend. According to a Los Angeles Times report, the young girl reported the incident to her mother after the actor had invited her to his home in Ojai, California, for a swim and fondled her genitals.

“She wanted to learn acupressure,” Stacy asserted. “I touched her for five seconds.”

Stacy only made matters worse for himself even outside the courtroom. When a family with two girls, aged 12 and 16, moved in, Stacy loitered outside their house and drunkenly yelled into their door, “Come talk to me, I know you’re in there!”

Then, just a week after, Stacy accosted the 10 and 11-year-old daughters of a local schoolteacher in their backyard. The mother ran into her yard to the cries of her daughters as Stacy furiously wheeled himself towards them. He was arrested, and following a psychologist’s diagnosis, confirmed to be a pedophile. Combined with his bizarre runaway stunt and suicide attempt, the judge sentenced him to six years in prison.

Found guilty, Stacy ran away to Hawaii and attempted suicide by jumping off the Pali lookout, a popular scenic cliff area in Oahu. He, again, miraculously survived what could have been a gruesome death and ended up in the hospital instead. “I even screwed this up,” he confessed to People magazine after his failed suicide attempt.

Stacy’s defense lawyer argued for a light sentencing. His attorney claimed that the offense was “minimal molestation.”

“I do want to make a formal apology for what happened that horrible day at my house,” Stacy had said before his sentencing. “I hope it did not affect her innocent mind.” He served out his prison time quietly at the California Institution for Men at Chino. Upon his release, Stacy spent the remainder of his days in obscurity.

On Sept. 9, 2016, James Stacy died after going into anaphylactic shock due to receiving antibiotics, according to his fiancée, Antigoni Tsamparlis. He was 79 years old.

Official trailer for Tarantino’s feature film Once Upon A Time In Hollywood, which gestures to the famous 1969 Manson murders.

James Stacy also has a connection to an upcoming feature film. At the time of the horrendous Manson Family killing spree in 1969, James Stacy’s ex-wife, Connie Stevens, lived not too far from the house where the starlet Sharon Tate and four others Hollywood socialites including coffee heiress Abigail Folger and celebrity hairstylist Jay Sebring were killed.

The press interviewed Stevens, who famously said that the killings, which happened in two separate properties in the area, had “scared the daylights out of everyone.”

She wasn’t exaggerating: Hollywood residents beefed up security however they could. Firearms sold out like hot cakes and residents bought up guard dogs, whose prices rose from $200 to $1,500 — like they were going extinct.

As the anniversary of the Manson murders creeps up to its 50th year, a slew of films based on the real-life butchering of Hollywood insiders will hit theaters in 2019. One of them is director Quentin Tarantino’s Once Upon a Time in Hollywood which hinges partly on a fictionalized version of James Stacy. 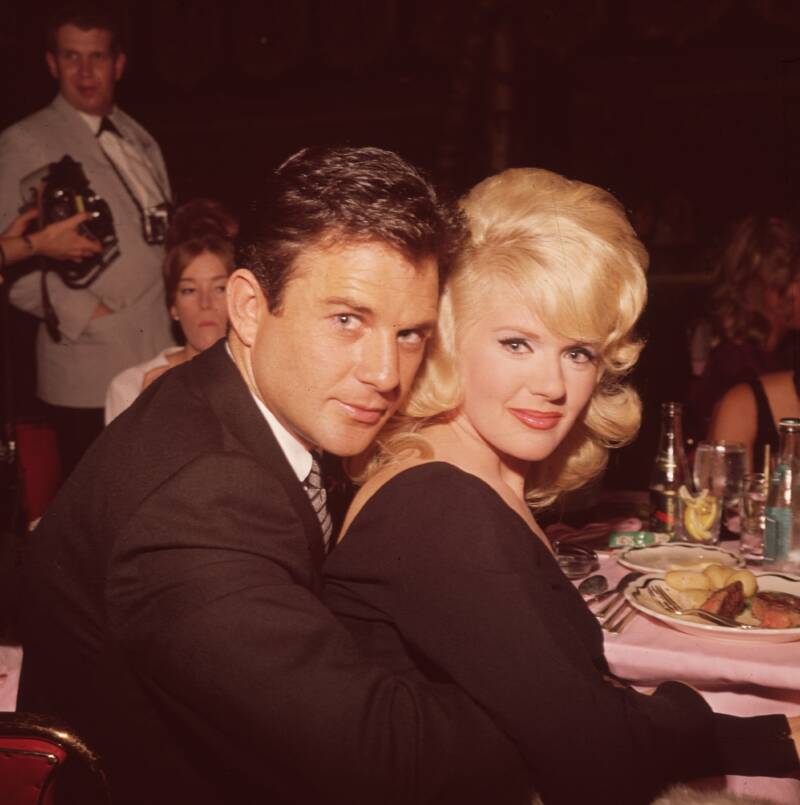 The film follows industry buddies Rick Dalton (played by Leonardo DiCaprio), a Western TV veteran, and his stunt double Cliff Booth (played by Brad Pitt) during the height of “hippie Hollywood.” The story unfolds as the duo struggle to make it in a rapidly-changing Tinseltown during the 1960s.

Interestingly, the relationship between and backgrounds of Rick and Cliff eerily resemble those of James Stacy and his brother Louie, who turned into a famous stunt double known as “Action Louie” after his football career.

James Stacy will be played by actor Timothy Olyphant. 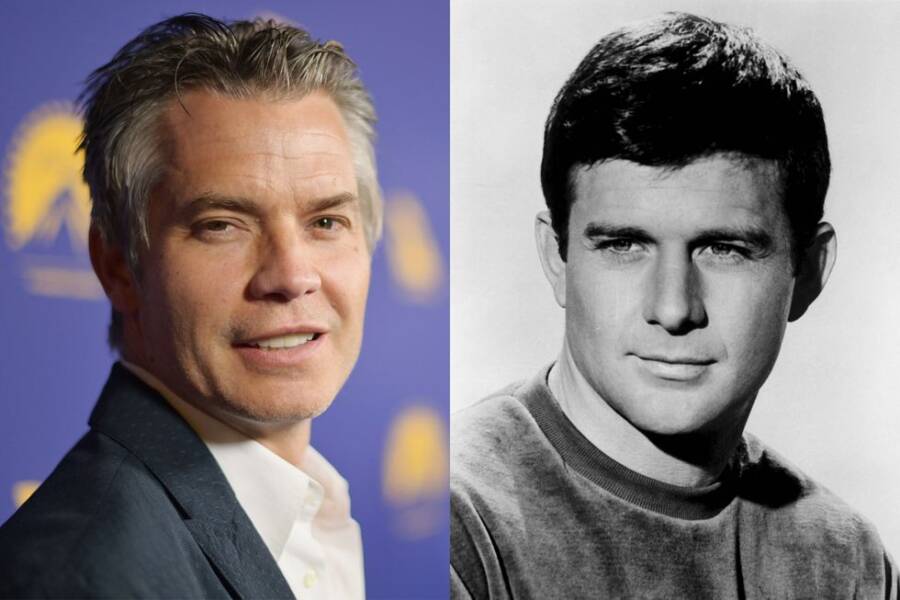 Getty ImagesTimothy Olyphant will star as the late actor Stacy in Quentin Tarantino’s Once Upon a Time in Hollywood.

The story of James Stacy is certainly a troubled one. He managed to avoid death, despite his best effort, twice. “God didn’t want him to die,” a friend of Stacy’s reported in 1996, “and so he’s going to get a second chance.”

Perhaps his small part in this latest film will do just that, too.

After this look at TV star-turned-Convict James Stacy, learn read about the very first movie sequels, remakes, and reboots. Then, refresh your knowledge on the Manson murders of 1969 with these Charles Manson facts.