Javier Peña: The DEA Agent Who Hunted Down Pablo Escobar

Just how accurately did Netflix's Narcos show the downfall of Pablo Escobar at the hands of DEA Agent Javier Peña? 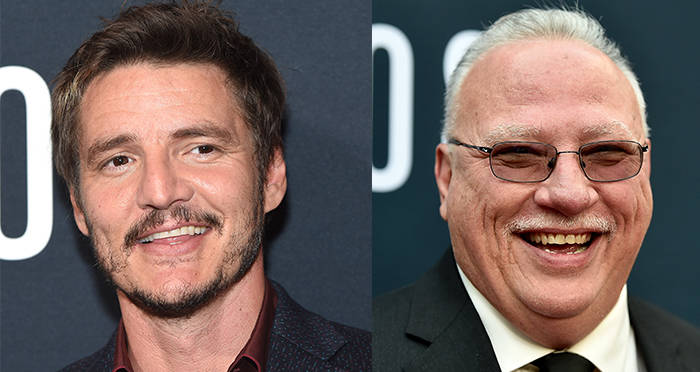 Netflix’s hit series Narcos started out by following the story of infamous drug kingpin Pablo Escobar. For years in the 1980s, Escobar made untold billions off trafficking cocaine into the United States from his native Colombia. And he protected his enterprise with terror and murder.

In the show as in real life, DEA Agent Javier Peña was assigned the daunting task of taking Escobar down. But the Peña of the show was also depicted as an agent not above breaking the law in order to complete his mission. So how closely does the Netflix version of Javier Peña match up to the real one?

The King Of Cocaine 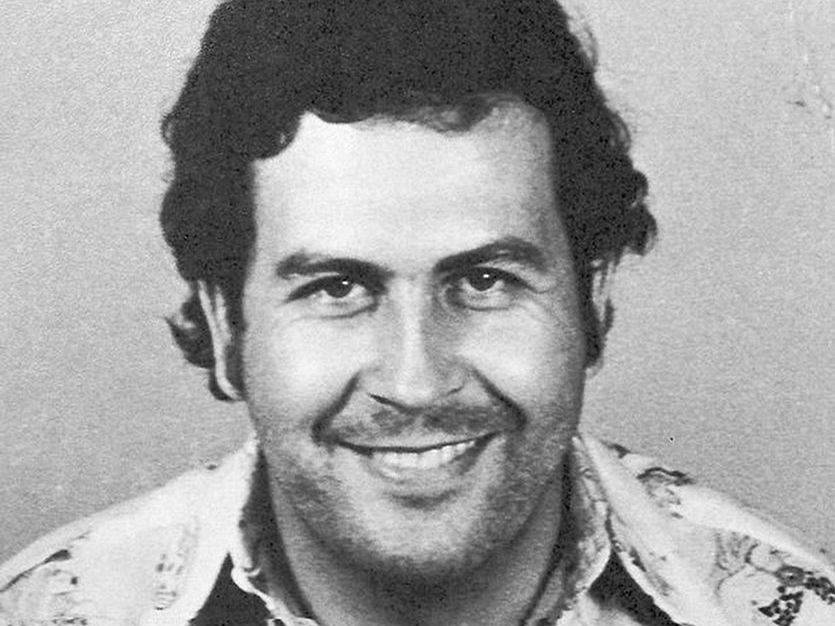 In the 1970s and 1980s, Pablo Escobar held the country of Colombia in an iron grip as he and his Medellín Cartel terrorized the nation with a wave of killings and constant bombings in support of their drug trade.

He fell into crime at an early age in the Colombian city of Medellín where he forged diplomas and report cards for high school students as a teenager. Soon, he graduated to stealing cars and sanding down tombstones from the local cemetery to resell them.

But Escobar found his true calling in contraband. He started to smuggle car stereos and home appliances. But by the 1970s, he had discovered that the real money was in cocaine.

Using routes he’d established early in his career as a smuggler, Escobar began moving drugs from Colombia and into other countries, including the United States. Within a few short years, the Medellín Cartel that Escobar established was pulling in millions every day.

Escobar himself quickly became one of the richest men in the world. At one point, it was estimated that he was worth more than $25 billion.

Of course, with that kind of money came problems. To maintain his hold on the cocaine trade, Escobar had to make it clear that he would kill anyone who crossed him, including judges and government officials.

His standing offer was “plata o plomo,” which means, “silver or lead.” You could take Escobar’s money and work for him, or you could choose to stand up to him and die. 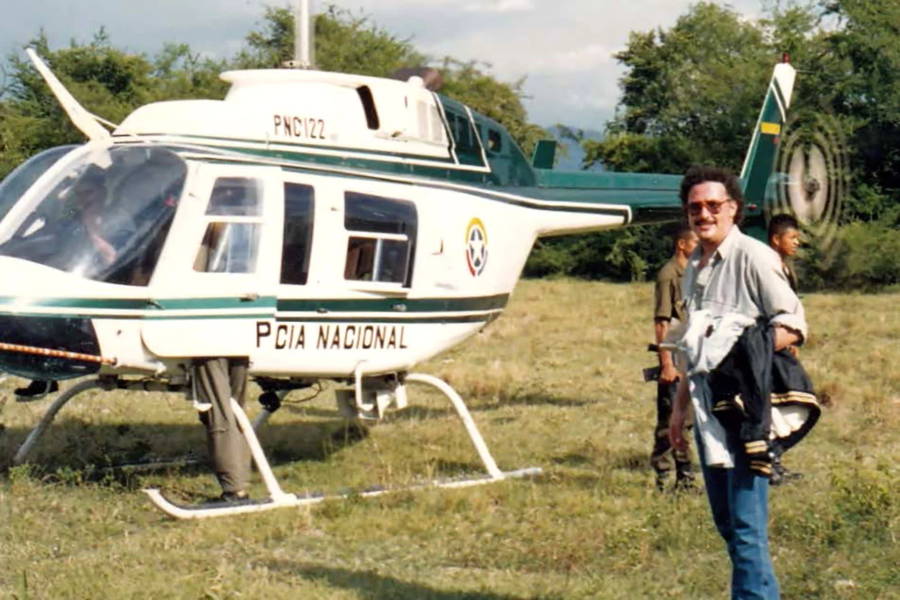 Agent Javier Peña of Texas was assigned by the DEA to join in the hunt for Pablo Escobar. He arrived in Colombia in 1988 and immediately set to work establishing contacts with the Colombian police.

Over the next few years, Peña and the Colombian police played a cat-and-mouse game with Escobar, tapping his phones and trying to turn his criminal associates against him. But through it all, Escobar always seemed to stay one step ahead.

Part of the reason it was so hard to catch Escobar was that he was willing to kill anyone who came after him.

“There were ten to fifteen car bombs on a daily basis,” Peña later said.

There was also a standing bounty of $300,000 offered by Escobar for any DEA agent working in Colombia, including Peña. 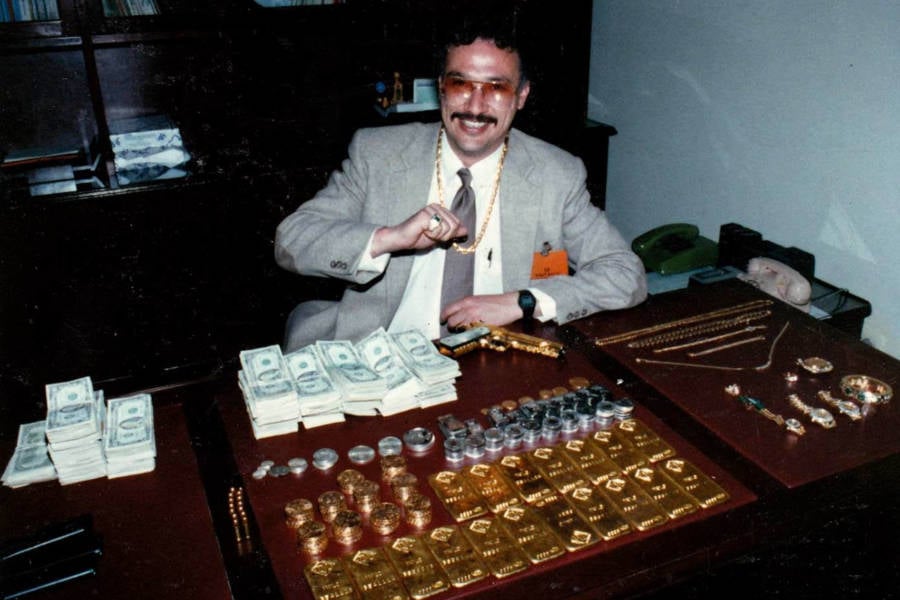 Steve Murphy/Texas MonthlyJavier Peña at the Colombian National Police Headquarters following a seizure of some of Pablo Escobar’s money, gold, and a .45 caliber gold-plated pistol.

Furthermore, because Escobar had corrupted so many officers in the Colombian police and military, Peña was never sure who he could trust. Oftentimes, the people Peña worked with funneled information directly to Escobar.

So Javier Peña soon began working with “Search Bloc,” a special division within the Colombian police led by Colonel Hugo Martinez which was formed from the most trusted officers within the police.

Search Bloc targeted people close to Escobar and turned them into informants. Eventually, the pressure on Escobar from authorities grew so great that he actually decided to surrender, but on a condition: He should get to build his own prison. 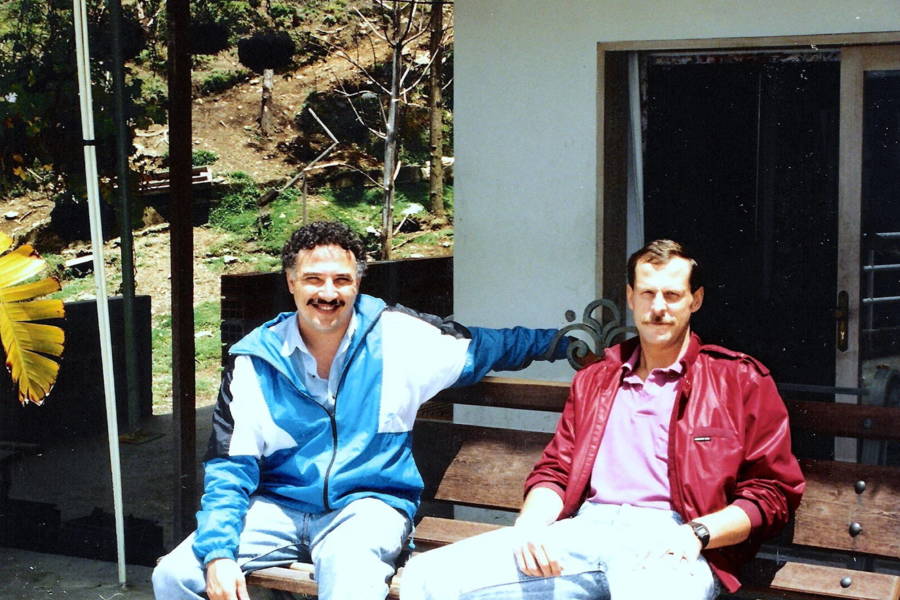 A few days before Escobar surrendered, DEA Agent Steve Murphy arrived in Colombia to help with the hunt for the slippery drug lord. He soon couldn’t understand why everyone seemed disappointed by Escobar’s surrender — until he discovered the type of prison that Escobar had in mind for himself.

“La Catedral,” as the prison was called, was more like a resort. Escobar had access to every comfort whilst inside. “Pablo Escobar had a suite,” Murphy later remembered. “He had a living room, a kitchen in one room, and the other consisted of a master bedroom and an office combination. The bathroom had its own jacuzzi. The prison itself contained its own discotheque, its own bar.”

What’s more, the police weren’t allowed anywhere near the prison. Worst of all, he continued to run his operation. Furthermore, being in “prison” gave Escobar protection from his enemies and allowed him to avoid a much-feared extradition to the U.S.

A scene from Narcos depicting the first meeting of Javier Peña and Steve Murphy.

Moreover, cops like Peña felt unsatisfied by the fact that Escobar was now in prison after having surrendered on his own terms. As he recalled:

“I got to Colombia in ’88, at the height of the Escobar search. And it was during the time where there was a lot of killings, the assassinations of cops, the car bombs. When he surrendered it was just deflating…because of all the cops he had killed. You have to understand, the search for Escobar was purely revenge. It wasn’t going after dope, it wasn’t going after money. It was just revenge because of all the cops he had killed, along with all those innocent people. When he surrendered, it was like we lost him. A lot of good cops died. A lot of innocent people. The kidnappings were a common things. Two guys on a motorcycle, that’s the way they killed a lot of people.”

Finally, when the Colombian government tried to move him to a regular prison in 1992, Escobar escaped. But this gave Javier Peña and Search Bloc (with an assist from a vigilante group known as Los Pepes) their chance to finally bring Pablo Escobar down for real.

In the end, Javier Peña and his team tracked Escobar down in his hometown of Medellín in 1993 through use of technology that allowed them to trace his phone calls. On December 2, 1993, upon realizing that he’d been found, Escobar made a run for it along the rooftops of the barrio Los Olivos near his hometown-hideaway. 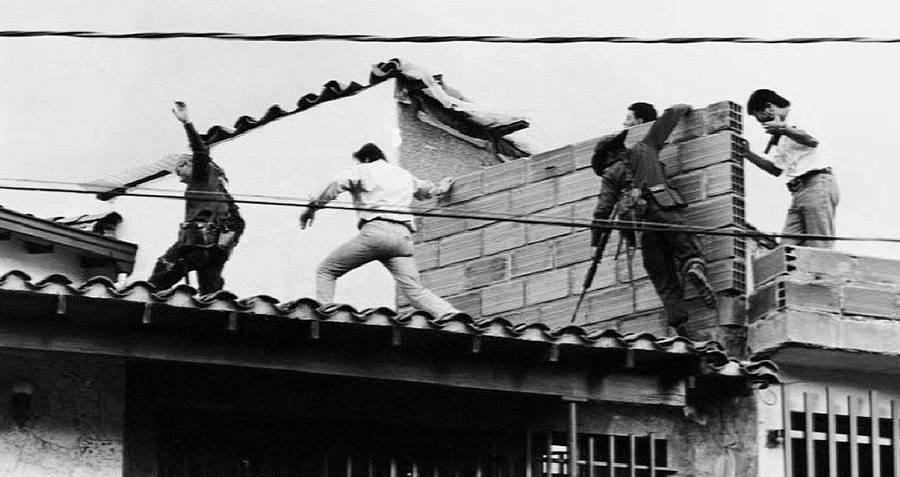 Escobar shot at the police, they returned fire, and Escobar was killed. To this day, no one is sure who fired the fatal shot.

Though Steve Murphy was there, Javier Peña was actually not on the scene. Murphy explained that Peña had just been called away on other DEA business:

Wikimedia CommonsAuthorities pose with Pablo Escobar just after this death.

And so with Pablo Escobar dead, Javier Peña left Colombia and went on to continue his successful career with the DEA before retiring in 2014. 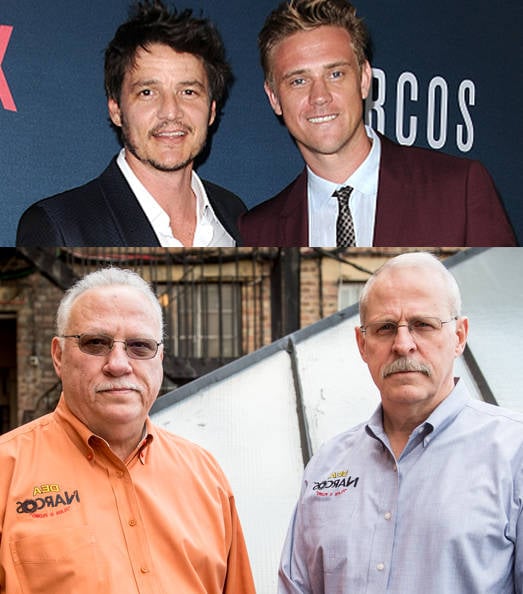 When Netflix began filming a series based on Escobar’s life, they reached out to Agents Peña and Murphy to serve as consultants. While the agents recounted all the details of the hunt to the writers of the show, they understood that the show would take creative liberties with it.

Most of the major events in the show are accurate, although the writers changed some of the timelines. For instance, Agent Murphy wasn’t actually in Colombia for most of the events related to the hunt for Escobar that were portrayed in the show’s first season.

In the show, Peña is also involved in several extra-judicial killings and other breaches of professional ethics, which is pure drama for the show.

“We never crossed that line, but that’s what makes the show exciting and interesting,” Peña said.

And while the show makes Peña and Murphy out to be the heroes of the story, Peña insists that it was the Colombian police who deserve the real credit.

“We worked primarily with the police, and they were the guys that we trusted with our lives. They kept us alive when we were out doing operations,” Peña said.

Nevertheless, Javier Peña’s role in taking down perhaps the most infamous drug lord in history was nothing short of essential.

After this look at Javier Peña, find out why Escobar’s cousin Gustavo Gaviria may have been the real brains behind the cartel. Then, learn about the bloody campaign that Escobar and Los Extraditables waged against Colombia’s extradition treaty with the United States.