When John F. Kennedy’s torpedo boat was sunk by a Japanese destroyer in 1943, he saved his crew in dramatic fashion, earning both the Navy and Marine Corps Medal and the Purple Heart. 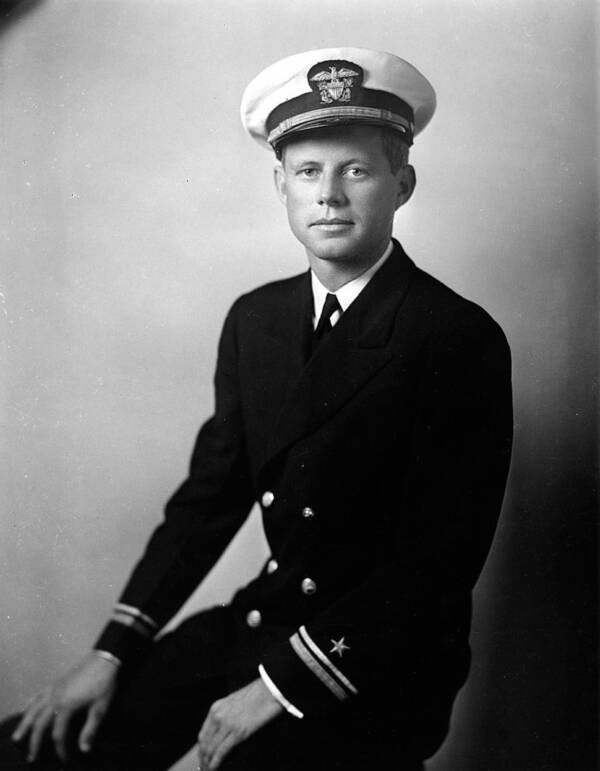 John F. Kennedy always shrugged off suggestions that he’d been a hero in World War II after his vessel was hit and he helped save the lives of his crew. “It was involuntary,” he said “They sunk my boat.” But Kennedy’s naval heroics were much more astounding than he often let on.

On Aug. 1, 1943, a Japanese destroyer sliced straight through Kennedy’s PT-109 boat, breaking it into two pieces. Trapped in open water with several badly injured sailors, the 26-year-old stepped up.

Over the next several days, Kennedy — who only got into the Navy thanks to his father’s maneuvering — proved himself a hero again and again. His brave, daring acts saved lives, and later earned him the U.S. Navy and Marine Corps Medal for Valor and a Purple Heart.

This is the story of JFK in the navy.

John F. Kennedy was born on May 29, 1917, into a world of privilege. Growing up with eight brothers and sisters in Brookline, Massachusetts, he later admitted that he didn’t know much about the Great Depression until he read about it at Harvard.

As he came of age, however, Kennedy became more interested in current affairs. He watched as World War II intensified in Europe and — even before Pearl Harbor — decided that he wanted to serve.

There was just one problem: Kennedy’s health. As a child, he’d suffered through chronic colitis, scarlet fever, and hepatitis. And as an adult, he had ulcers, asthma, and a bad back. The U.S. Army Candidate School took one look at Kennedy and dubbed him “4-F” or “medically disqualified.”

For most, that might have been the end of the story. But Kennedy was determined. And his wealthy father, Joseph P. Kennedy, was determined to help.

As the former ambassador to the United Kingdom, Joseph had a large network of powerful friends. He tapped one, Captain Alan Kirk, to lend a hand. Joseph had known Kirk as a naval attache in London. But Kirk had since become the director of the Office of Naval Intelligence, and he pulled some strings to get John F. Kennedy in the Navy.

Though he was able to sidestep normal procedures, Kennedy’s naval career still started like everyone else’s. He enlisted as an ensign, and slowly worked his way up.

By 1943, he’d attended the Naval Reserve Officers Training School and attained the rank of Lieutenant. The Navy put him in command of a motor torpedo boat called PT 109 and sent him to fight in the Pacific.

Life for Kennedy in the Navy was tough but good. Sensitive to his wealthy background, he refused to pull rank and helped his men with grunge work like scraping and painting the hall. 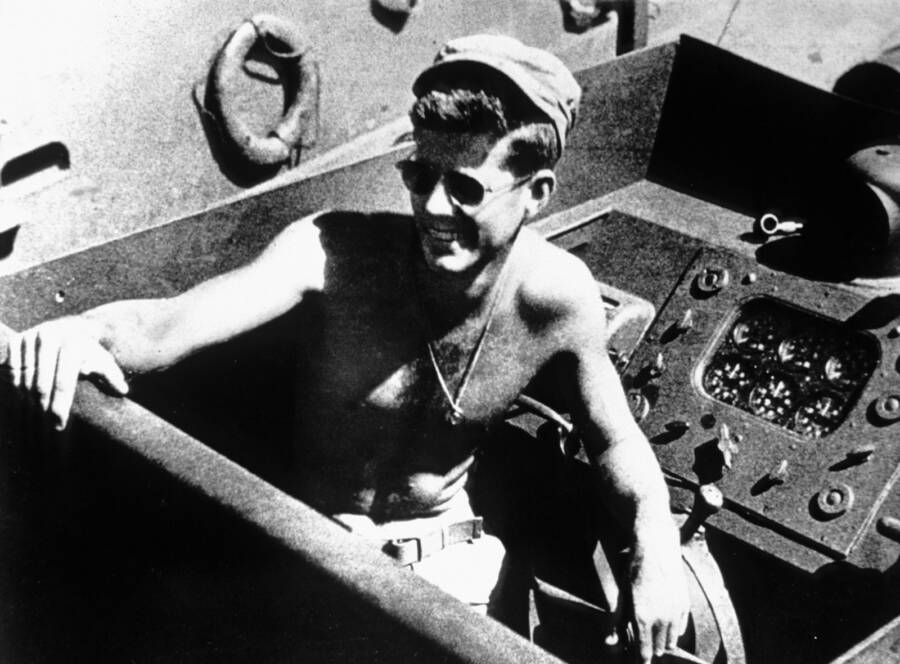 John F. Kennedy Presidential Library and MuseumJFK was in command of PT-109 when a devastation collision cut the boat in two.

For several months in 1943, Kennedy and the crew of PT 109 conducted nighttime patrols of the waters around the Solomon Islands. On Aug. 1, they were on one-such patrol when it suddenly took a stomach-dropping turn.

At around 2:30 a.m., one of Kennedy’s sailors cried into the darkness: “Ship at two o’clock!” Kennedy, at the wheel, spun around and saw a hulking Japanese destroyer on the approach. But as he futilely yanked on the wheel, the 388-foot Japanese destroyer called Amagiri smashed straight through PT-109.

The collision threw Kennedy against the cockpit, right onto his bad back. “This is how it feels to be killed,” he thought.

Though he survived, a number of his men weren’t as lucky. The collision had cut PT-109 in half, killing two.

“Who’s aboard?” Kennedy shouted, and the cries from the darkness told him that while most of them clung to one piece of the boat, with him, two were trapped on the other piece. One of those men, Patrick Henry McMahon, had been badly burned.

To gather the men together, Kennedy swam through the pitch-black night to the other half of PT-109. He held McMahon’s life jacket in his teeth and guided both men back to the others. In the darkness, it took them forty-five minutes to swim 100 yards. 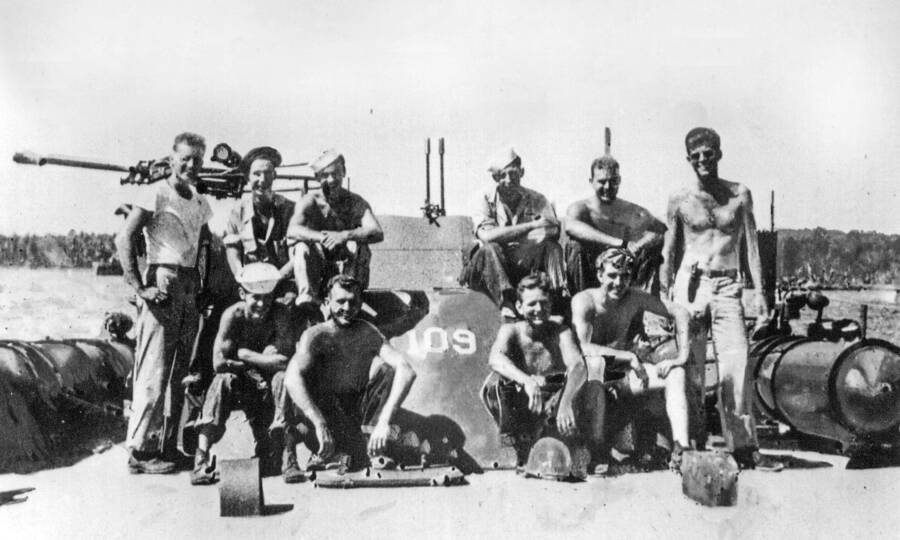 John F. Kennedy Presidential Library and MuseumThe crew of PT 109, with Kennedy at the far right.

But daylight brought little relief. The men were still trapped in the open water. And help didn’t seem to be coming. Indeed, an officer had written a letter to his mother in which he morosely noted that “Jack Kennedy, the Ambassador’s son” had “lost his life.”

“Well,” Kennedy said to the others, “what do you want to do?”

“Anything you say, Mr. Kennedy,” one sailor replied. “You’re the boss.”

Kennedy knew that they couldn’t stay in the water. For one, their piece of the PT boat had started to sink. For another, Japanese boats and planes would soon start making their patrols. Kennedy gazed over the horizon and spotted a thin strip of land.

“We will swim to that small island,” he said.

Though Kenedy had injured his back, he once again took McMahon’s life jacket strap in his teeth. For four or five hours, he swam toward shore, pulling his injured crewman behind him. When they finally reached Plum Pudding Island, Kennedy threw up all the seawater he’d ingested and collapsed from exhaustion.

But their ordeal wasn’t quite over yet. On the first night, Kennedy tried to intercept other PT boats by carrying a lantern and swimming out into the ocean. It didn’t work. The next day, he and his men moved to another island, with Kennedy again towing McMahon by his life jacket.

Finally, by Aug. 5, they encountered some friendly indigenous people. Kennedy carved a message into a coconut — “NAURO ISL… COMMANDER… NATIVE KNOWS POS’IT… HE CAN PILOT… 11 ALIVE… NEED SMALL BOAT… KENNEDY” — which incredibly made its way to a base nearby. Soon, rescue appeared on the horizon.

“Where the hell have you been?” Kennedy called out. When the sailors responded that they had some food, Kennedy quipped: “No thanks. I just had a coconut.”

How JFK’s Naval Heroics Helped Propel Him To The Presidency

Three years later, John F. Kennedy’s naval career help propel him into politics. A writer named John Hersey wrote a story about JFK in the Navy for The New Yorker and Reader’s Digest. 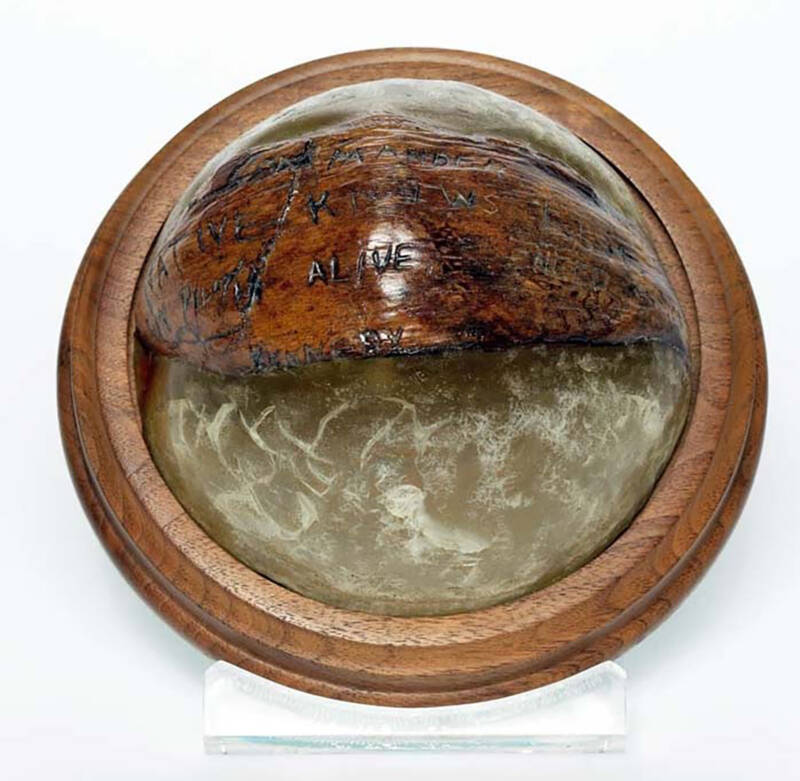 John F. Kennedy Presidential Library and MuseumKennedy kept the coconut, which he later used as a paperweight in the Oval Office.

But although the war had elevated Kennedy’s profile, it irrevocably changed his life in another way. The conflict had killed his older brother, Joseph, whom their father had long desired to run for president.

After his death, Kennedy inherited his father’s ambition. He made a fateful run for Congress in 1946.

“If Joe were alive, I wouldn’t be doing this,” Kennedy told his father.

But during his campaign, he ran to win. Kennedy’s naval career made him a hero with two medals — the US Navy and Marine Corps Medal for Valor and a Purple Heart — and an attractive political candidate.

“Of course, the same can be said of almost any American or British or Australian man of my generation. The war made us. It was and is our single greatest moment.”

After winning a seat in Congress, Kennedy next won a seat in the Senate. And in 1960, he ran for president against the incumbent vice president, Richard Nixon. Though Nixon had also served in the Navy, Kennedy’s charm and charisma helped boost him to victory.

He became president in January 1961. But even from the White House, Kennedy’s naval career remained a source of pride for him. In Aug. 1963, just a few months before his tragic assassination, Kennedy wrote:

“Any man who may be asked in this century what he did to make his life worthwhile, I think can respond with a good deal of pride and satisfaction, ‘I served in the United States Navy.'”

Though Kennedy is famous (and infamous) for plenty else, the story of John F. Kennedy in the Navy stands as one of his shining moments.

After reading about JFK in the navy, look through these shocking Kennedy family facts. Or, listen to the earliest known JFK recording, from his Harvard days.