The Life And Death Of JFK Jr., The Beloved Son Of John F. Kennedy

John F. Kennedy Jr. was just 38 years old when he died in a tragic plane crash on July 16, 1999 — and not everyone believes that it was an accident.

When John F. Kennedy Jr. died in a plane crash in 1999, the media came to a quick conclusion — the so-called “Kennedy curse” was alive and well. After all, the heir apparent to the family dynasty had lost both his father, President John F. Kennedy, and his uncle, Senator Robert F. Kennedy, to brutal assassinations, making JFK Jr.’s death all the eerier.

On July 16, 1999, the late president’s son had planned to travel to a family wedding. Though he had a broken ankle, John F. Kennedy Jr. climbed into a single-engine Piper Saratoga plane alongside his wife, Carolyn Bessette-Kennedy, and her sister, Lauren Bessette. He meant to drop off Lauren at Martha’s Vineyard, and then fly with Carolyn to the Kennedy family compound for the wedding in Hyannis Port, Massachusetts.

But the trio never made it to their destinations. Sixty-two minutes after taking off from the Essex County airport in New Jersey, Kennedy’s plane — which he was piloting himself — crashed into the water. The crash killed everyone aboard the plane on impact. Their bodies were found five days later, on July 21st, marking yet another tragic end among the Kennedy clan. 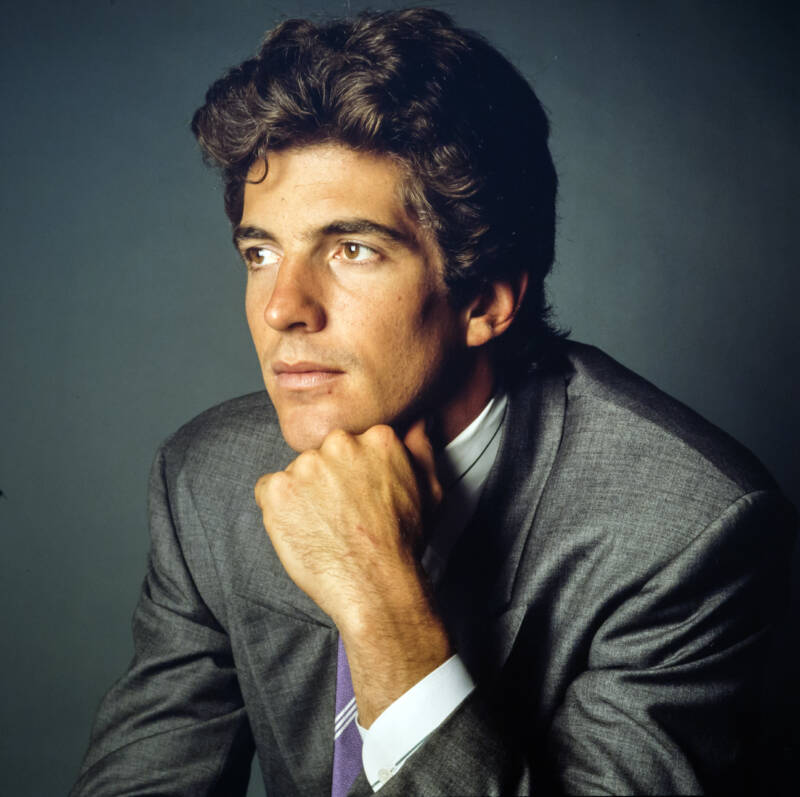 Brownie Harris/Corbis via Getty Images John F. Kennedy Jr.’s death in 1999 was one of many tragedies that befell his famous family.

Ever since then, however, intrigue around JFK Jr.’s death has lingered. Though his crash was officially attributed to pilot error, some have speculated that something else may have happened to him on that July night.

Could Kennedy have deliberately crashed his plane because of problems in his marriage and his work? Could he have been murdered for asking too many questions about his father’s assassination? Or, as some conspiracy theorists believe today, could John F. Kennedy Jr. actually still be alive?

Here’s everything you need to know about JFK Jr.’s death, from his shocking demise in a plane crash to the rumors that have persisted ever since.

The Challenge Of Being A President’s Son

From the beginning, John F. Kennedy Jr. seemed to live a charmed albeit cursed life. Born on November 25, 1960, he came into the world just weeks after his father, John F. Kennedy, was elected president. As such, JFK Jr. started his early life in the glamorous world of the Kennedy White House.

But JFK Jr., affectionately dubbed “John-John” by the American public, encountered tragedy at a young age when, just three days before his third birthday, his father was assassinated in Dallas, Texas on November 22, 1963. JFK Jr. etched himself into Americans’ hearts when he poignantly saluted the president’s coffin during his funeral in Washington D.C. three days later.

From that moment on, John F. Kennedy Jr. lived a life of careful balance. On the one hand, he had the weight of his father’s legacy on his shoulders. On the other, he had a deep desire to define himself as his own man.

“If I had to stop and think about it all,” Kennedy once told a friend, according to PEOPLE, “I would just sit down and fall apart.” 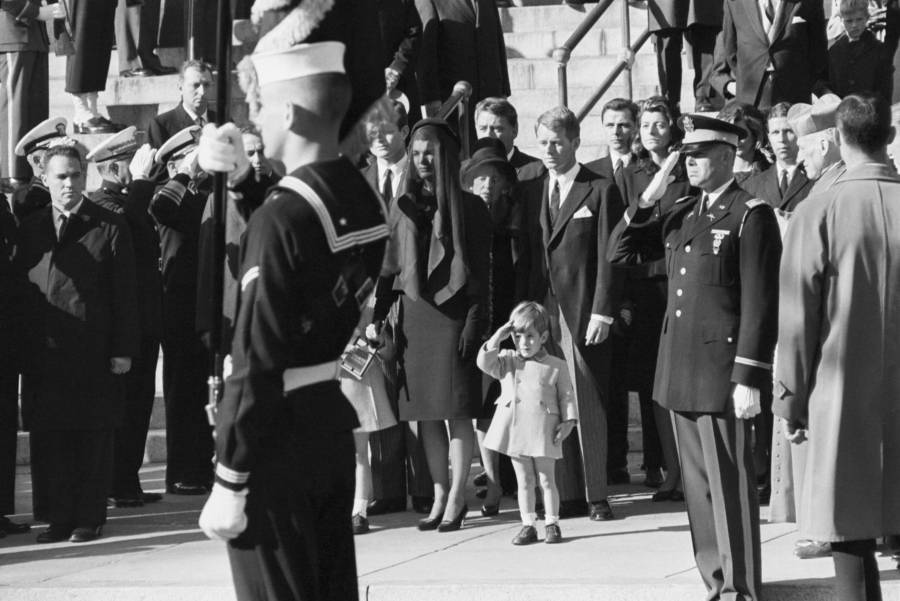 Bettmann/Getty ImagesJFK Jr. salutes his father’s coffin during his funeral on November 25, 1963. One of the photographers who captured this moment later called it “the saddest thing I’ve ever seen in my whole life.”

He attended Brown University and New York University Law School, found work as an assistant district attorney in New York — after failing the bar exam twice — and, in 1995, founded his own magazine, George.

The late president’s son was also named PEOPLE’s “Sexiest Man Alive” in 1988 and enjoyed a number of high-profile romances with celebrities before he married Carolyn Bessette, a Calvin Klein publicist, in 1996.

But although Kennedy seemed to have it all — the famous name, the career, the beautiful wife — he struggled in the months leading up to his death. According to Biography, he clashed with Bessette over having children, media attention, and how much time he spent working at his magazine.

By July, however, the couple put their problems on the back burner to attend the wedding of Rory Kennedy, Kennedy’s cousin and the youngest daughter of Robert F. Kennedy. Tragically, they’d never make it to the ceremony.

On the evening of July 16, 1999, John F. Kennedy Jr., his wife, and his sister-in-law arrived at Essex County airport near Fairfield, New Jersey. Kennedy would be the sole pilot. Though one of his flight instructors had offered to accompany him, he refused, saying that he “wanted to do it alone.”

At 8:38 p.m., they took off in Kennedy’s single-engine Piper Saratoga plane. They planned to fly first to Martha’s Vineyard, where JFK Jr. and his wife would drop off Lauren, and then continue on to the wedding at the family compound in Hyannis Port, Massachusetts. The first leg of their journey should have taken a little over an hour — but something went wrong.

About 62 minutes into the flight, according to the Washington Post, Kennedy’s plane descended to 2,500 feet as it came within 20 miles of Martha’s Vineyard airport. Then, in less than 30 seconds, the plane plummeted 700 feet — and disappeared from the radar. It never arrived. 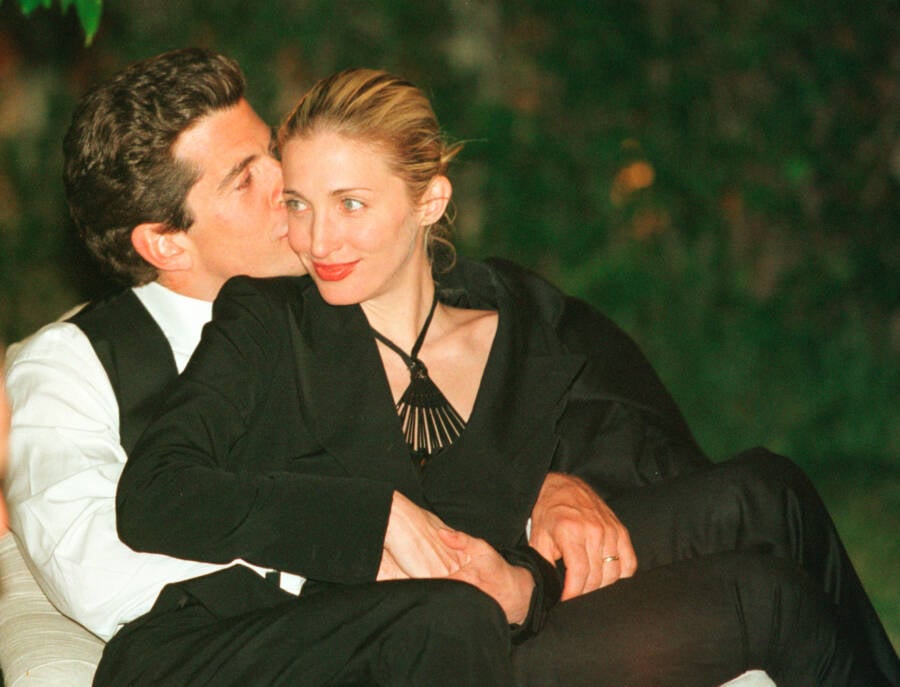 Tyler Mallory/LiaisonJohn F. Kennedy Jr. and his wife, Carolyn, pictured a couple of months before they both perished in a plane crash.

Though the Coast Guard and the Air Force quickly launched a search for the missing plane, most assumed that Kennedy and the others aboard were all dead. “The curse of the Kennedys strikes again,” exclaimed one British newspaper. Other news organizations soon echoed that sentiment.

And, indeed, Navy divers found Kennedy and the others on July 21st. They were eight miles from the shore, 116 feet beneath the ocean waves. All three, an autopsy found, had died on impact. At the time of the crash, Kennedy was 38 years old, his wife was 33, and his sister-in-law was 34.

“From the first day of his life, John seemed to belong not only to our family, but to the American family,” John F. Kennedy Jr.’s uncle, Ted Kennedy, said in an emotional eulogy for him on July 23rd at the Church of St. Thomas More in New York City. “We who have loved him from the day he was born, and watched the remarkable man he became, now bid him farewell.”

But how exactly did JFK Jr. die? What caused his plane to crash?

The official reason for JFK Jr.’s death is relatively simple. According to the History Channel, the National Transportation Safety Board found in 2000 that JFK Jr. crashed because he was an inexperienced pilot who’d become disoriented and lost control of his plane in the dark, hazy night.

The Boston Globe similarly noted on the 20th anniversary of John F. Kennedy Jr.’s death that “the series of decisions he made that night — flying a complex aircraft without a flight plan, choosing not to have his flight instructor accompany him in marginal weather conditions, and piloting an airplane with a foot injury — have grown in significance.”

Indeed, Kennedy was recovering from a broken ankle when he got into the cockpit of his plane, which might have impacted his ability to fly it. And at that point, he had only held his pilot’s license for a little over a year. He just had 300 hours of flying experience under his belt, and he may have struggled to understand some of his plane’s more intricate equipment.

According to air crash investigator Richard Bender, who spoke to InTouch Weekly several years after the doomed flight, Kennedy still had trouble “remembering what instruments he should have been looking at.”

Bender added: “If you don’t have that scan down when you’re flying on the instruments, you can get in trouble real easy because your body’s telling you, or your brain is telling you’re in one position when in actuality, you’re in some other position. And that’s what they call spatial disorientation.”

In other words, JFK Jr.’s death had a tragic explanation. At least, officially.

Over the years, other theories have emerged. As US Weekly reported, some believe that Kennedy was a careful, risk-averse pilot who should have been able to easily complete his fatal flight. His untimely demise reportedly shocked his fellow students at the Flight Safety Academy. Many said that he took safety very seriously, and a federal pilot examiner even called him an “excellent pilot” who “passed everything with flying colors.”

If the official story is wrong and Kennedy didn’t die in an accidental crash, then some have speculated that he died by suicide due to alleged problems with his marriage or his work. Some have also suggested that he was murdered — possibly for looking into his father’s assassination.

For years, Kennedy was allegedly “obsessed” with learning the full story behind his father’s death. One reporter who covered the Kennedy family even said, “With his own money, he was going to reopen the investigation, and then that’s when he died and that was obviously the end of it.”

In recent years, some conspiracy theorists have even claimed that JFK Jr. never died at all and that he’s hiding out in Pennsylvania to this day.

Regardless, John F. Kennedy Jr. is often remembered for the tragedies that defined his life. Sadly, history might always see him as the little boy who saluted his father’s coffin — and the man who perished in a plane crash.

After reading about JFK Jr.’s death, go inside some of the most intriguing facts about President John F. Kennedy’s assassination. Then, discover the tragic story of Rosemary Kennedy, the president’s sister who was lobotomized and institutionalized.