Marine John Basilone, a hero of Guadalcanal and Iwo Jima, once said that he was a "plain soldier" — he was wrong.

John Basilone was never able to settle down. While briefly working a humdrum job as a caddy at a local country club while still a teenager in 1930s New Jersey, he used to tell the golfers that he was looking for adventure.

But unlike so many restless young men who say such things, John Basilone followed through on his dreams — and then some. 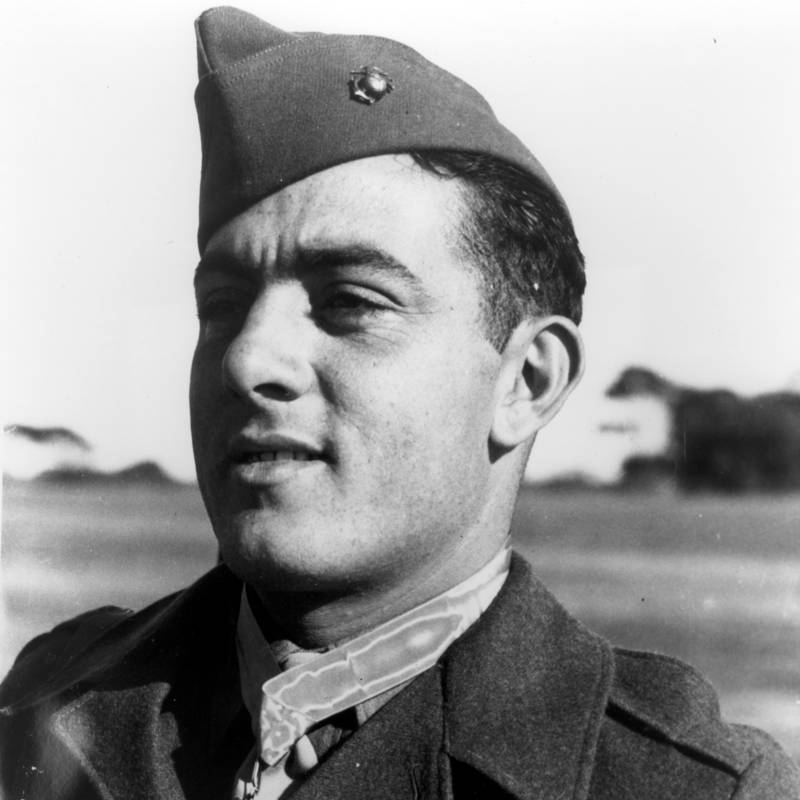 Basilone found his adventure in the United States Marine Corps in World War II, during which he earned both the Congressional Medal of Honor and the Navy Cross, a feat no other Marine accomplished throughout the war.

And his incredible heroics make it easy to see just why he was so extraordinary.

The sixth of 10 children born to parents who had immigrated to the U.S. from Italy, John Basilone was born on November 4, 1916. As a young boy growing up in Raritan, New Jersey, he was forced to lead a fairly normal life and go to school like all the other kids.

But as soon as he turned 15 and was able to drop out of school and find adventure elsewhere, that’s exactly what he did.

After briefly working at that local country club, he joined the U.S. Army in 1934 at the age of 18 in order to see the world. He served three years in the Philippines, where he earned the nickname “Manila John” and became a champion Army boxer.

He finished his term of three years and returned home to the United States, where he worked as a truck driver in Maryland. But, once again, such a life was too boring. Basilone then joined the Marines in 1940, not long before the United States was to enter World War II. 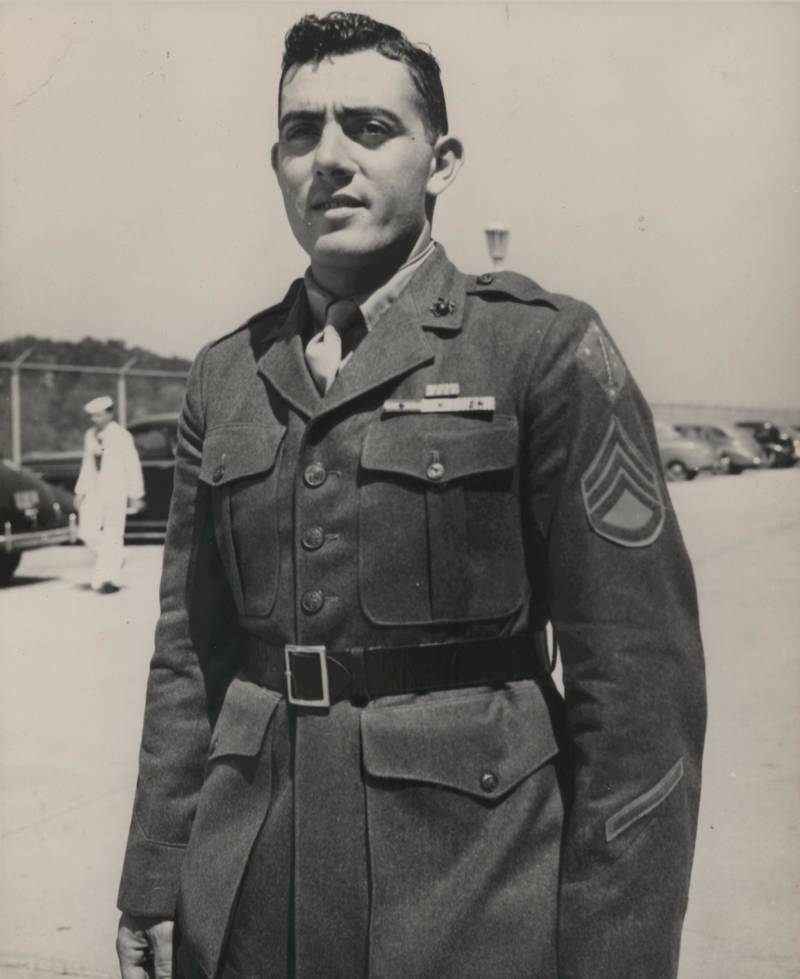 At first, John Basilone joined the Marines in hopes of getting back to the Philippines, but that’s not quite how things worked out. After receiving training at Guantanamo Bay, Cuba, Basilone was flung into the thick of the war’s brutal Pacific Theater at Guadalcanal in September 1942.

Guadalcanal was a constant, bloody struggle. The Japanese desperately wanted the strategically-valuable island and the entire Solomon Islands chain to which it belonged. Knowing this, the Americans landed Marines there — even though they were unprepared and outnumbered.

Nevertheless, the Americans were able to take an island airfield and rename it Henderson Field, then tried to hold it as long as possible. Doing so was essential because Henderson Field was the place where American forces in the area could receive supplies and reinforcements in order to maintain their presence in the Solomon Islands. 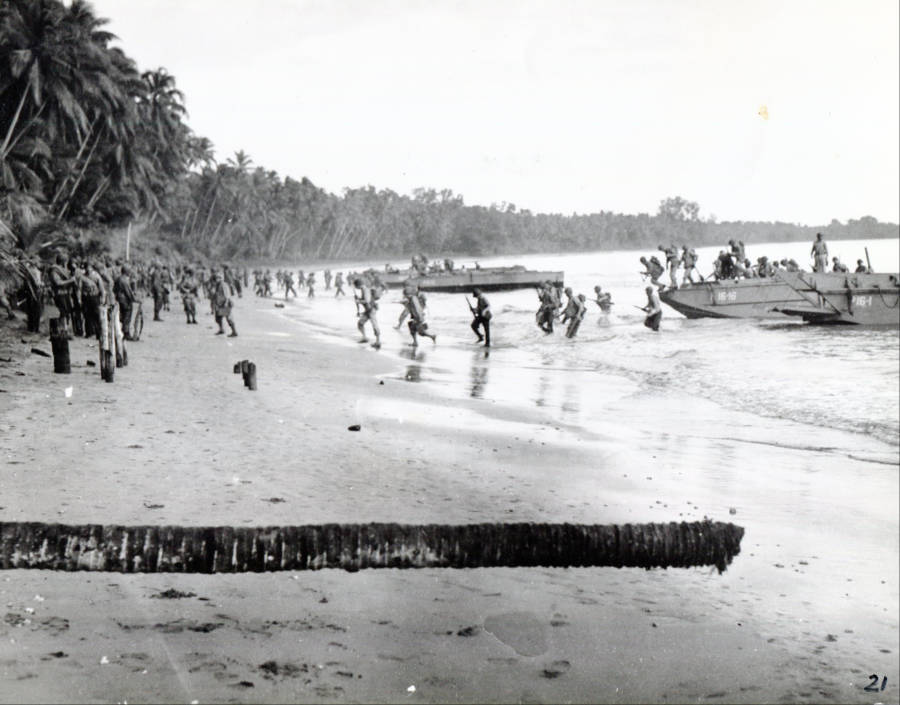 It was during this crucial struggle that John Basilone first distinguished himself as a soldier. In October 1942, Basilone commanded two sections of Marines brandishing heavy .30-caliber machine guns. It was his units’ job to hold the perimeter at Lunga Ridge, around 1,000 yards south of Henderson Field.

Because Basilone’s men were suffering from malaria and conditions were always muddy, holding the hill was a constant chore as waves upon waves of Japanese troops attacked the ridge.

At one point at the end of October, 3,000 Japanese soldiers started up the hill toward the perimeter. Small teams of Marines fired their machine guns into the night despite taking mortar fire and grenades. Nevertheless, the weary Marines kept up their defense for two solid days.

It was under these brutal conditions, in the rain and mud while facing a constant assault, that John Basilone became a hero.

On the night of October 25, 1942, the Japanese focused their attack on John Basilone’s units. That was their mistake.

The Japanese charged the hill relentlessly, with dead Japanese soldiers serving as human bridges so that their remaining comrades could cross over the barbed wire fences near the American perimeter. The tactics were brutal but effective as the Japanese got closer and closer to the line.

Then, things got worse when one of the Americans’ machine guns jammed. This should have opened up a hole in the line for the Japanese to exploit — but not on Basilone’s watch.

Basilone himself carried 90 pounds of weaponry and ammunition to resupply the malfunctioning gun’s position, running a distance of 200 yards through enemy fire in order to do so. Basilone ran back and forth between gun pits, supplying ammunition and clearing gun jams for his junior Marines.

At one point, Basilone lost his gloves, which were essential hand protection when swapping out scalding hot barrels for high-powered machine guns. But that didn’t stop Basilone, who used his bare hands to continue to operate the blistering gun and single-handedly eliminate an entire wave of Japanese soldiers while burning his hands and arms along the way.

Pfc. Nash W. Phillips, who was with Basilone on Guadalcanal, recounted the intense scene:

“Basilone had a machine gun on the go for three days and nights without sleep, rest or food. He was barefooted and his eyes were red as fire. His face was dirty black from gunfire and lack of sleep. His shirt sleeves were rolled up to his shoulders. He had a .45 tucked into the waistband of his trousers.” 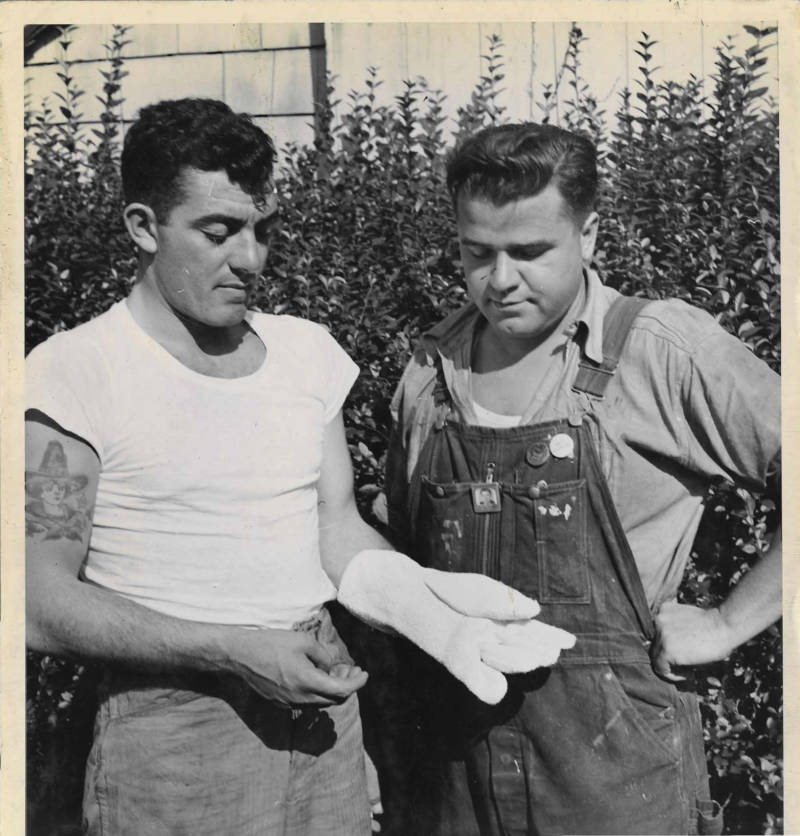 FlickrJohn Basilone on leave during the war.

Despite Basilone’s heroics, his men were slowly dying off at the hands of the larger Japanese forces. When reinforcements finally did arrive three days later, only Basilone and two other Marines were left alive.

But they’d been able to hold their perimeter and Henderson Field remained in American hands. During the operation, Basilone himself was credited with 38 kills.

For his actions, John Basilone received the Congressional Medal of Honor. Upon getting the nation’s highest military honor, the gunnery sergeant said, “Only part of this medal belongs to me. Pieces of it belong to the boys who are still on Guadalcanal. It was rough as hell down there.”

Instead of continuing his nationwide bond tour, where he raised $1.4 million in war bonds, Basilone wanted back in the action. The Marines offered to make him an officer in Washington, D.C., but he refused. “I’m a plain soldier,” he said, “and I want to stay one.”

After Guadalcanal, John Basilone indeed signed up for combat duty once more. Again, he commanded machine gun units, this time on the black sands of Iwo Jima.

As soon as he landed with his men on February 19, 1945, Basilone proved his courage. His units were pinned by blistering enemy fire at Red Beach, but he ordered the Marines behind him to move forward to take the beach. “Get off the beach!” he yelled. “Move out.” 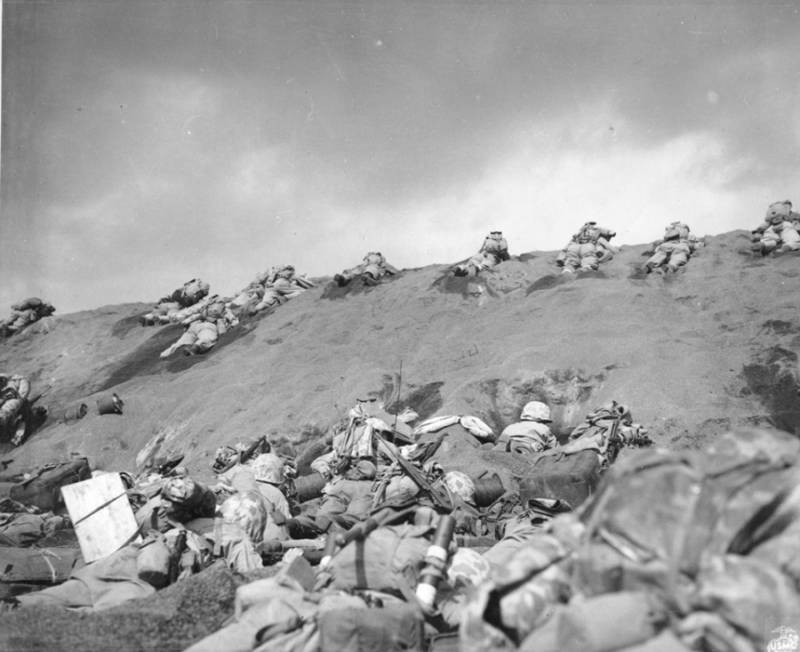 USMC Archives/FlickrRed Beach One on Iwo Jima in 1945.

After he and his men did storm the beach, Basilone then single-handedly destroyed a reinforced Japanese position, allowing his unit to secure an airfield that same day. This was yet another instance of John Basilone alone doing something that would have still been impressive if it had been done by an entire unit — but it was his last such act of heroism.

Shortly afterward, a mortar round exploded and killed Basilone along with four other Marines. He was just 27 years old. 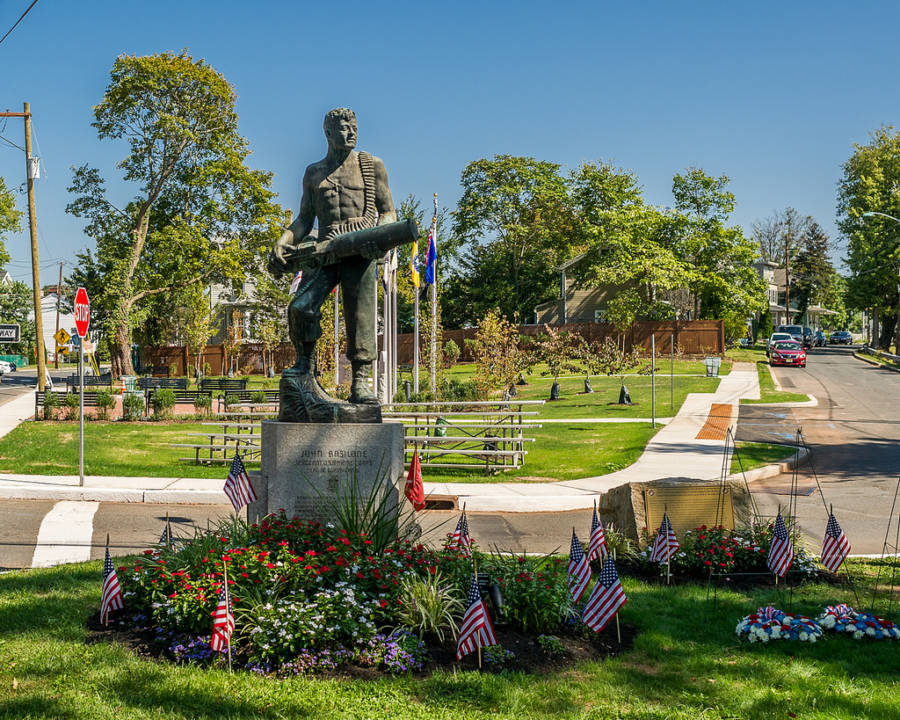 For his actions at Iwo Jima, he was posthumously awarded the Navy Cross, America’s second-highest award for soldiers serving in combat. He also received a burial at Virginia’s Arlington National Cemetery alongside thousands of other American heroes. Two U.S. Navy ships bore his name.

And in late September every year, Basilone Day is celebrated in his hometown of Raritan, New Jersey, where a life-size bronze statue watches over the town and several buildings bear his name.

John Basilone likely would have scoffed at the idea of having such honors heaped upon him. As he told his family just after enlisting in the Corps, he just wanted to be a Marine, plain and simple. “Without the Corps,” he told his brother, “my life means nothing.” Of course, he wasn’t quite right about that.

After this look at John Basilone, read up on “Mad” Jack Churchill, the bagpipe-playing, sword-wielding badass of World War II. Then, discover the story of Vietnam War sniper Carlos Hathcock, whose exploits are almost too incredible to believe.