John C. Woods lied to the U.S. Army and got them to promote him to the position of the official hangman of the Nazis at Nuremberg — and he made sure they suffered as they died. 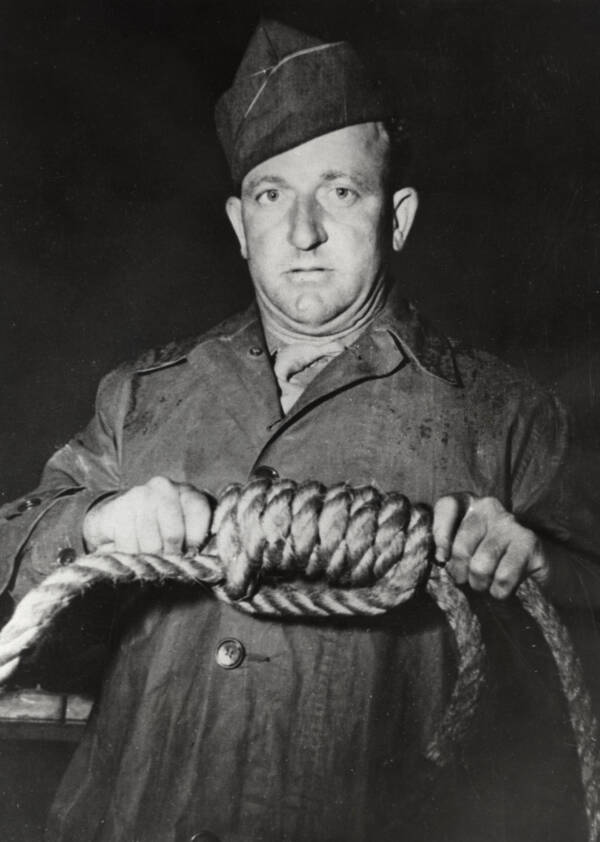 adoc-photos/Corbis/Getty ImagesJohn Clarence Woods (1911-1950), American executioner during the Nuremberg executions. In 1946. (Photo by )

There are few tears shed anywhere in the world for the 10 Nazi war criminals hanged by Master Sergeant John C. Woods after their conviction at the Nuremberg Trials following World War II. Of the 10 men he was charged with hanging, quite a few of them weren’t killed by a broken neck, which is how a hanging is supposed to work.

Instead, several of the convicted Nazis died a slow death by strangulation at the end of Woods’ noose. One Nazi, Field Marshall Wilhelm Keital, reportedly took a full 28 agonizing minutes to die. One might say that M/Sgt. Woods was bad at his job, but it’s even more likely that he was deliberately bad at his job, taking a perverse pleasure in the slow torturous deaths of the condemned. For some, this makes his handiwork all that much more fitting for some of the 20th century’s greatest monsters.

“Those Nazis were bad, bad men,” said military historian Col. French MacLean (Ret.). “So what if it took longer for them to die. Maybe they should have thought of that as they were sending people to concentration camps.”

The Early Life And Military Career Of John C. Woods

John Clarence Woods was born on June 5, 1911, in Wichita, Kansas, and was raised by his grandmother following his parents’ divorce when he was only two years old. He made it as far as Wichita High School, but dropped out after attending only two years.

On December 3, 1929, Woods joined the U.S. Navy. However, he went AWOL after a few months. Woods was convicted by a general court-martial and examined by a psychiatric board in April 1930, where it was determined that Woods suffered from Psychopathic Inferiority without Psychosis and was dishonorably discharged:

“This patient, though not intellectually inferior, gives a history of repeatedly running counter to authority both before and since enlistment. Stigmata of degeneration are present and the patient frequently bites his fingernails. He has a benign tumor of the soft palate for which he refuses operation. His commanding officer and division officers state that he shows inaptitude and does not respond to instruction. He is obviously poor service material. This man has had less than five months service. His disability is considered to be an inherent defect for which the service is in no way responsible. [He] is not considered a menace to himself or others.” 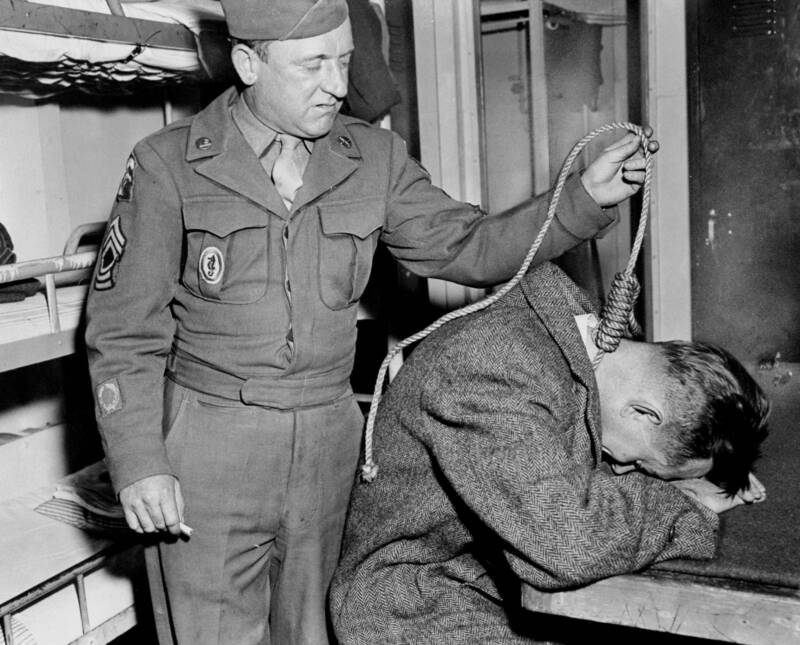 Frank Hurley/NY Daily News Archive/Getty ImagesMaster Sergeant John C. Woods demonstrates hanging technique on a reporter, at Pier 3 Army Base, Brooklyn. Woods was hangman of ten Nazis at Nuremberg. He shows how a noose was placed about the necks of the deceased war makers. November 19, 1946.

Woods returned to Kansas after his discharge, where he worked in a variety of manual labor jobs for the next several years, but he found himself back in the military during World War II. Woods enlisted in the Army in August 1943 and was assigned to Company B, of the 37th Engineer Combat Battalion, 5th Engineer Special Brigade.

MacLean wrote in his book, American Hangman, that Woods probably participated in the D-Day landings at Omaha Beach on June 6, 1944, but Woods doesn’t appear to have any other major combat experience.

Prior to the D-Day landing, American military executions in the European Theater of Operations were carried out in England by civilian executioner Thomas Pierrepoint and other British personnel. However, in late 1944, the U.S. Army looked for an enlisted man to take over the execution of American personnel and John C. Woods was one of the applicants for the position.

Woods’ application was formally accepted in October 1944, and he was attached to the 2913th Disciplinary Training Center as a hangman. The consensus among historians is that Woods lied his way into the job to avoid the possibility of returning to combat duty. Col. MacLean writes:

“He did not get wounded on Omaha Beach, but he saw a bunch of guys get killed. I’m sure he thought, I do not want to go through that experience again… He volunteers to get out of the combat engineers. He is accepted and promoted from private to master sergeant, and his pay goes from $50 to $138 a month.” 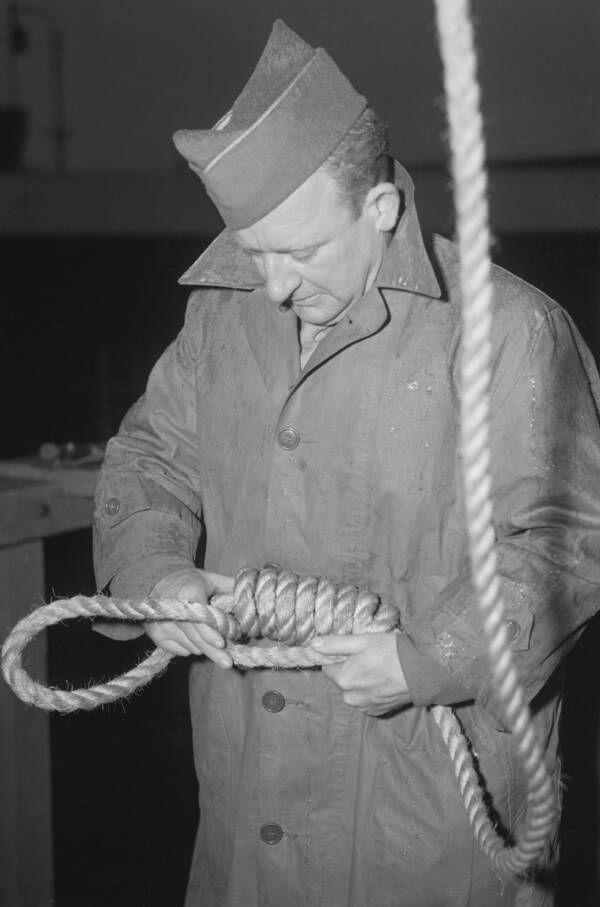 Nazi necklace being prepared by M/Sgt. John C. Woods, official Hangman for the European Theater of Operations with 92 hangings to his credit. He is preparing to hang Nazis who shot U.S. Airmen. Nuremberg, Germany, c. 1945-6.

Woods served as the primary executioner in the hangings of at least 34 American soldiers in France the remainder of 1944 and 1945. He also assisted in the hanging of at least three other soldiers and Army reports suggest that at least 11 of those executions resulted in bungled hangings.

His first execution in Germany occurred on June 29, 1945, when he hanged three Germans for the murder of an American Lt. Lester E. Reuss. Then, on November 10, 1945, he hanged five Germans involved in the Rüsselsheim massacre of U.S. Airmen of August 26, 1944.

During this period, Wood caught the attention of Herman J. Obermayer, a clerk in the office of the Theater Provost Marshal, who later went on to become a well-known journalist and publisher. Less than impressed by Woods, Obermayer wrote: “John Woods was a short, muscular sort of a man, and I would describe him as kind of the world’s flotsam. He talked the language of the hobos and flotsams and the people who do these kinds of jobs.” 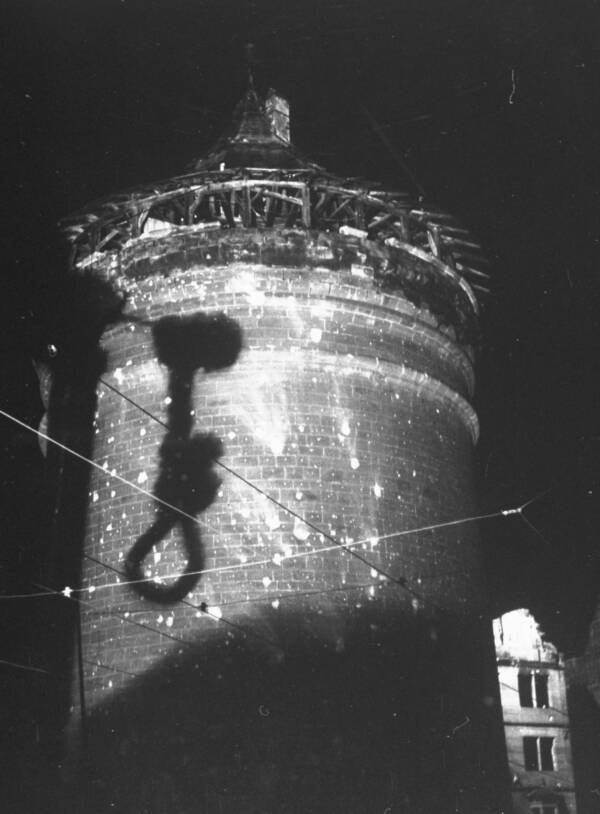 Woods continued serving as the U.S. Army hangman in Germany throughout the Winter and Spring of 1946. His most notable executions during this period were those of 14 men convicted of committing concentration camp atrocities at Dachau over two days, May 28 and 29, 1946.

Woods returned to Landsberg, Germany, for the hanging of German policeman Justus Gerstenberg for the murder of US airman, Sgt. Willard M. Holden. It was there that Woods caught the attention of Lt. Stanley Tilles, who was tasked with organizing the Nuremberg hangings. 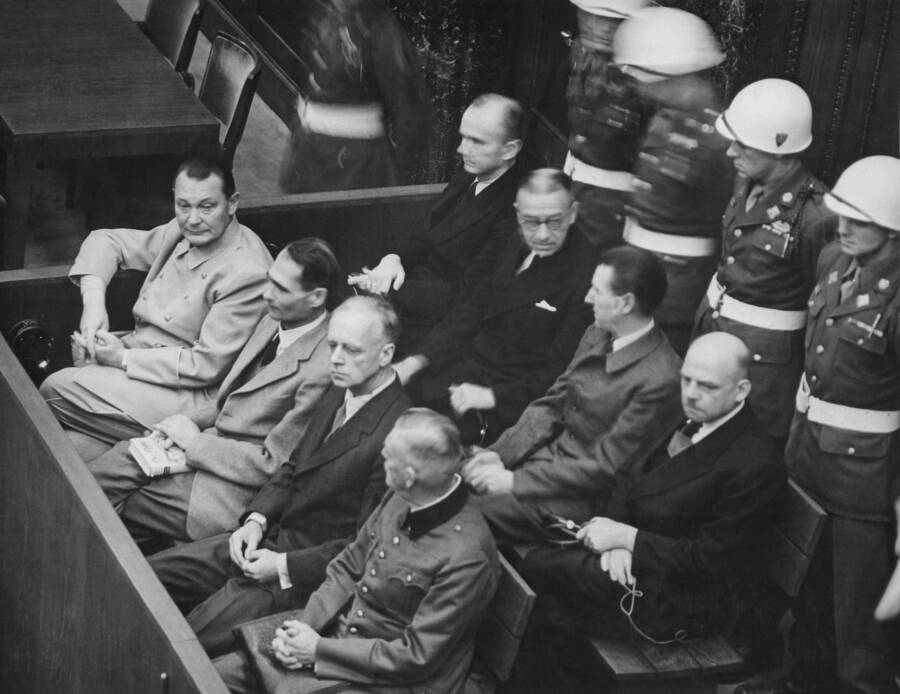 Wikimedia CommonsDefendants in the dock at the Nuremberg trials. The main target of the prosecution was Hermann Göring (at the left edge on the first row of benches), considered to be the most important surviving official in the Third Reich after Hitler’s death. Nuremberg, Germany, c. 1945-6

Following the atrocities committed by the Nazis during World War II, the Allied powers convened a series of international military tribunals in Nuremberg, Germany, according to the governing international laws of war at the time.

The Nuremberg Trials were most notable for the prosecution of 24 prominent members of Nazi Germany’s political, economic, military, and judicial leadership. The trials’ Tribunal was convened between November 20, 1945, and October 1, 1946, resulting in the conviction of 12 men for war crimes — include Martin Bormann, the head of the Nazi Party Chancellery, who was tried in absentia. The sentence was death by hanging, and it would fall to John C. Woods to carry out the sentence.

Although the Nuremberg Tribunal had sentenced 12 men to hang, one of those, Hermann Göring, committed suicide by ingesting cyanide the night before the execution. As Bormann was still at large — he was believed to have committed suicide in May 1945, but his body was not recovered and identified until 1973 — this left 10 men to be hanged by M/Sgt. John C. Woods. 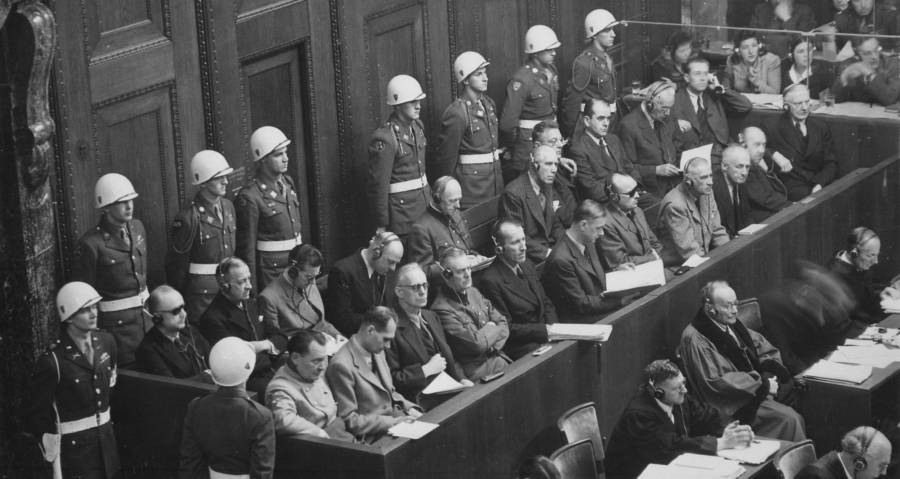 National Archive at College ParkThe defendants at the major war criminals trial at Nuremberg sitting in the defendants’ dock, circa 1945-46.

Woods carried out the death sentences of the Nuremberg 10 in the early morning hours of October 16, 1946, using the standard drop method of hanging instead of the long drop method. The U.S. Army has consistently denied claims that the drop length and other errors caused the condemned men to slowly die from strangulation instead of quickly from a broken neck.

However, evidence and eyewitness accounts remain showing that some of the men died agonizingly slowly. Field Marshal Wilhelm Keitel, Chief of the “High Command of the Armed Forces,” reportedly took 28 minutes to finally choke to death. 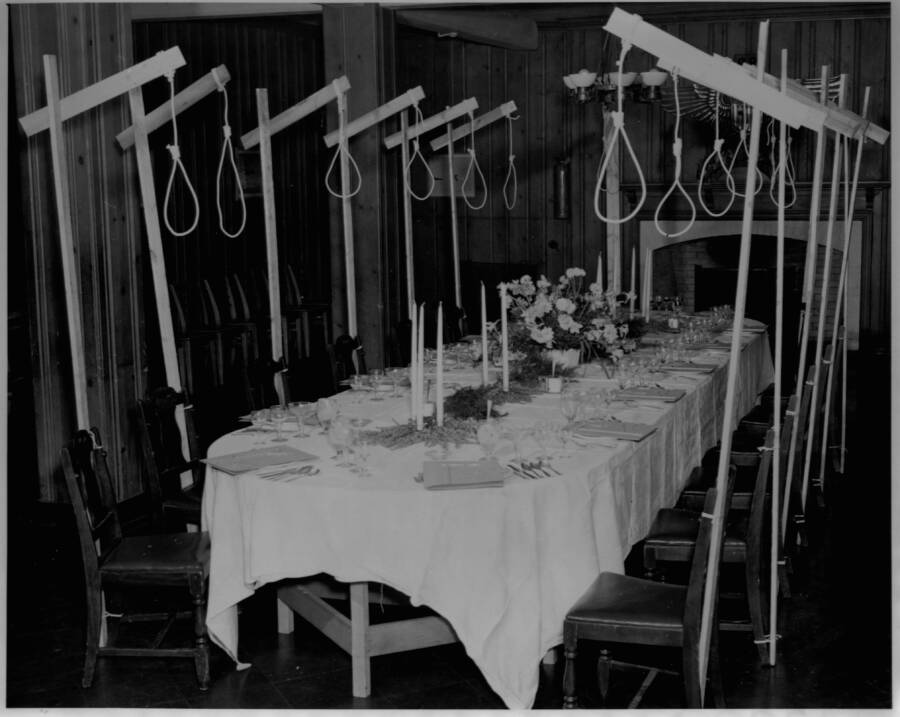 Library of Congress/Corbis/VCG/Getty ImagesGeneral Hap Arnold set out a dining table for the accused at Nuremberg, complete with nooses.

Time Magazine published an article on October 28, 1946, detailing some of the horrors of the hangings of the Nuremberg 10. For example, Cecil Catling, a reporter for the London Star “declared that there was not enough room for the men to drop, which would mean that their necks had not been properly broken and that they must have died of slow strangulation.”

Additionally, Time reported that Catling claimed that some of the nooses weren’t correctly tied. As a result, some of the men smashed their heads on the platform as they dropped.

Kingsbury Smith, a correspondent with the International News Service, reported on the execution of Julius Streicher, the publisher of Der Stürmer, a Nazi anti-Semitic newspaper:

“When the rope snapped taut with the body swinging wildly, groans could be heard from within the concealed interior of the scaffold.

“Finally, the hangman, who had descended from the gallows platform, lifted the black canvas curtain and went inside. Something happened that put a stop to the groans and brought the rope to a standstill. After it was over, I was not in the mood to ask what he did, but I assume that he grabbed the swinging body… and pulled down on it. We were all of the opinion that Streicher had strangled.” 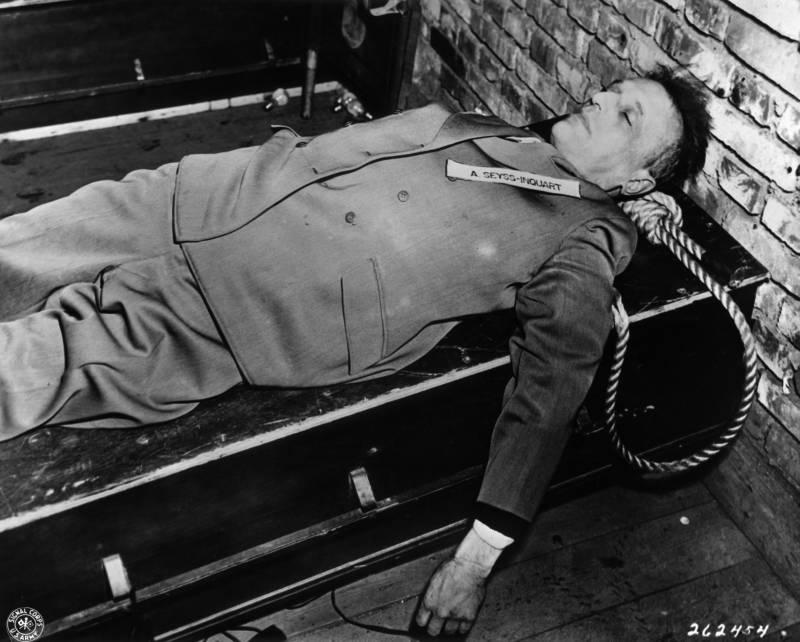 After the last man was pronounced dead at 2:57 a.m., Woods was quoted as saying, “Ten men in 103 minutes. That’s fast work,” adding that he “never saw a hanging go off any better.”

In the wake of the hangings, another quote by Woods was published in hundreds of newspapers and magazines worldwide.

“I hanged those ten Nazis … and I am proud of it … I wasn’t nervous. … A fellow can’t afford to have nerves in this business. … I want to put in a good word for those G.I.s who helped me … they all did swell. … I am trying to get [them] a promotion. … The way I look at this hanging job, somebody has to do it. I got into it kind of by accident, years ago in the States …”

In his career as a hangman, Woods is credited with executing 92 men. He continued to serve in the Army after the war with the 7th Engineer Brigade in Eniwetok, Marshall Islands. There, on July 21, 1950, Woods met his own end when he was electrocuted while repairing an engineer lighting set.

A history channel overview of the Nuremberg Trials of Nazi war criminals in 1945-6.