As one of the most ruthless villains of the Wild West, John Joel Glanton and his gang terrorized the Apache for cash throughout the 1840s. 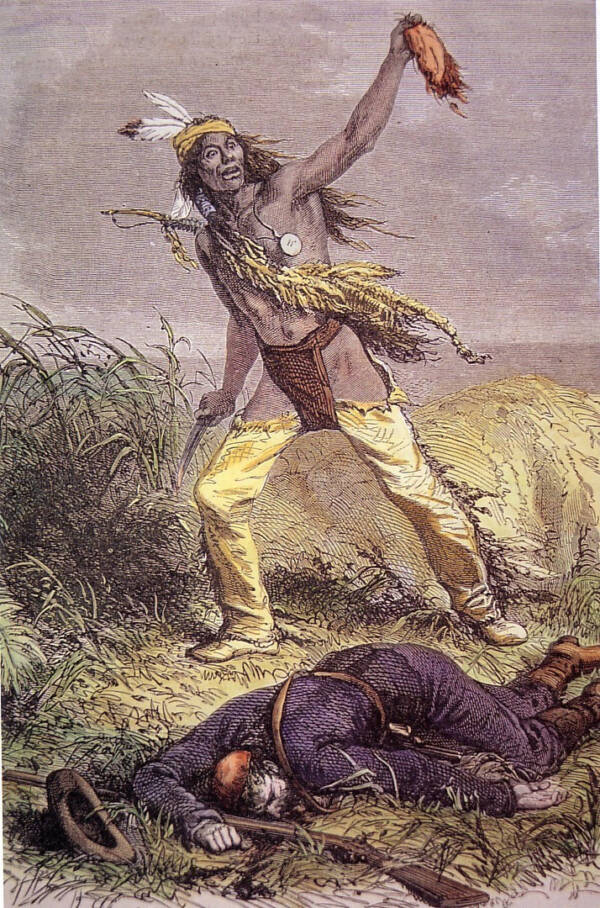 For a time in the early years of the Mexican republic, scalps became the basis of a grisly trade for men like John Joel Glanton.

As much as we’ve romanticized the American West for the opportunities it symbolized, the frontier was also the backdrop for some of the most horrific and violent stories in American history.

Before iconic western “outlaws” like Wild Bill Hickok or Buffalo Bill, there were hardened frontiersmen like John Joel Glanton.

Glanton didn’t just play the part of cowboy in a roadshow like Hickok, but he lived the life of the depraved frontiersman that Hollywood was all too happy to write out of a John Wayne movie.

Glanton was a scalp-hunter, roaming the Sonora desert with a band of murderers for Apache Natives to mutilate for money.

Meet the man of the Wild West who was actually wild. 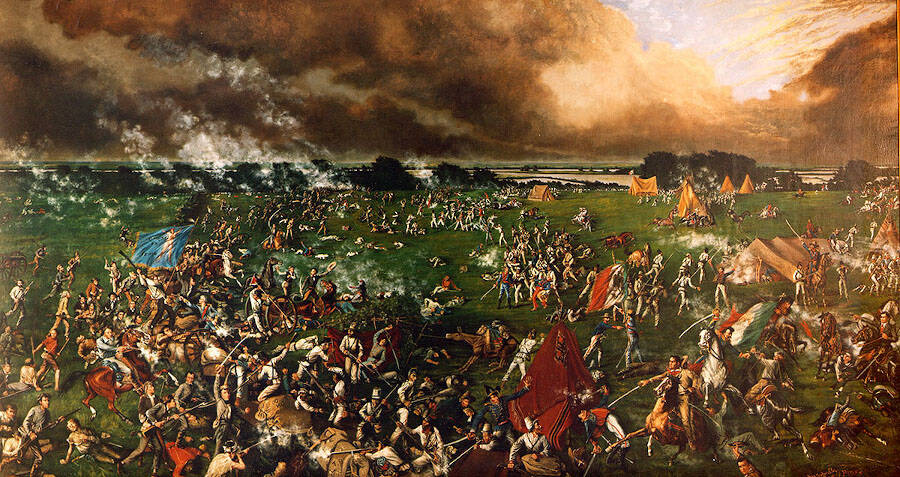 Wikimedia CommonsGlanton served in several regiments during the Mexican-American War, 1846-1848, during which he enhanced his reputation as a skilled ranger with a talent for violence.

John Joel Glanton was born the son of poor white farmers in Edgefield, South Carolina, in 1819. At this time, the United States was looking to expand westward.

Meanwhile, Glanton was bottle nursing on brutality. After Glanton’s father died, the family moved to Arkansas where his mother remarried a plantation owner. Even before his 16th birthday, Glanton had garnered a reputation for incredible violence and was reportedly already an active outlaw in Tennessee.

But it was in Texas that he truly became a monster.

In 1835, Texas was just squatter’s land. Positioned in the hinterland between Mexico and the U.S., Texas became contested property. But considering Mexico itself was not yet independent from Spain, the last thing it wanted to deal with was the 60,000 to 70,000 squatters from the north refusing to pay taxes or recognize Mexican authority on Texas land.

What ensued was a war for Texas’ independence, and 16-year-old Glanton joined. He made a name for himself as a scout which was a hard job that required those who took it to ride fast over great distances while thinking quickly and being resourceful.

Glanton managed to escape the war largely unharmed. He spent the next few years between Louisiana, Arkansas, and San Antonio, where he joined John C. Hays’ company of Texas Rangers. Glanton was said to be engaged around this time, but his fiance was allegedly kidnapped and scalped by Apache natives.

Glanton would eventually remarry and have a son.

Meanwhile, Mexico simmered at the defiance of Texians, as they were then called. In 1846, the United States which was hungry for conquest declared war on Mexico. Glanton soon enlisted as a lieutenant in the Texas Mounted Rifle Volunteers, a counter-guerrilla regiment in the conflict. 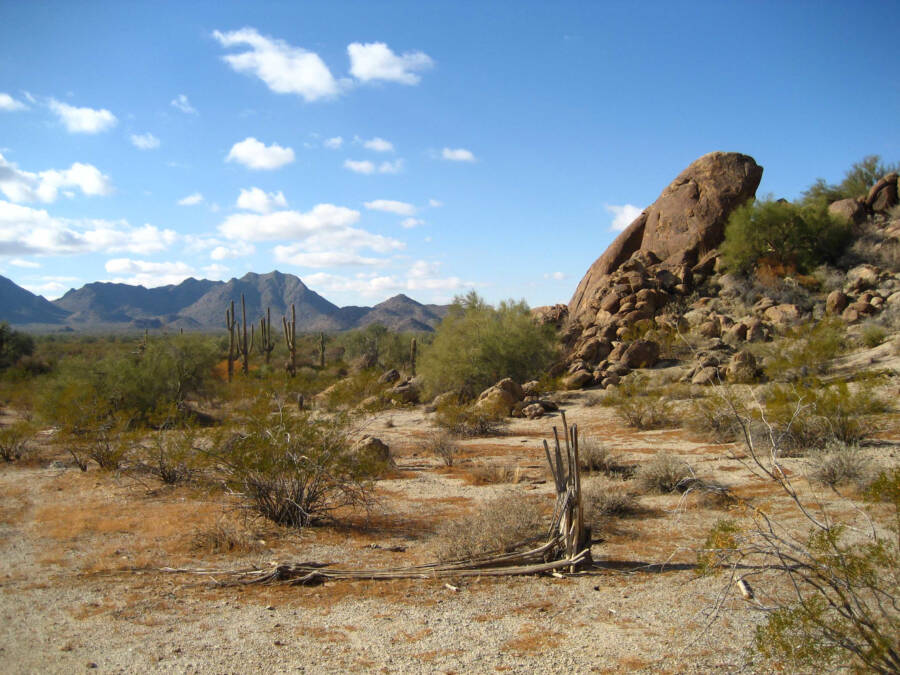 Wikimedia CommonsAll across the harsh terrain of the Sonora Desert Glanton and his men hunted Apaches for their scalps.

The northern Mexican states of Sonora, Chihuahua, and Coahuila had long struggled with attacks by the Apaches, a group of Native American tribes who raided settlers as a means of income and reacted explosively when Spanish, and later Mexican, forces attacked them and settled on their land.

Finally, in 1835, Manuel Escalante y Arvizu, governor of Sonora, struck upon a novel idea: he would offer a bounty of 100 pesos – roughly $100 – for each Apache scalp brought to his capital at Arizpe.

The Apaches were too skilled at riding and fighting for the governor’s limited military forces to defeat them, so in bloody desperation, he hoped instead to massacre them. The governors of Chihuahua and Coahuila soon followed, offering different rates of descending value for the scalps of Native American men, women, and children.

By the time the Mexican-American War ended in 1848, Glanton was out of work. The next year, he left his wife and child to lead a band of gold prospectors from California to Mexico, but when this effort failed, he happened to be in the perfect place to utilize his violent skills in the scalp trade. Wikimedia CommonsSamuel Chamberlain in uniform as a general of the Union Army. Chamberlain’s memoir, My Confession: The Recollections of a Rogue, would later become the definitive account of the Glanton Gang’s unseemly activities.

Glanton had arrived just in time to join the scalp-hunting boom in Mexico, which had already attracted a Seminole war party from Florida and a team of runaway slaves. In short order, the Glanton Gang was formed which included, supposedly, a young soldier named Samuel Chamberlain.

Chamberlain’s writing on his experiences beside Glanton would form the most popular account of the gang.

The year 1849 proved to be a banner one for the Glanton gang and other scalp hunters. Governors paid out thousands of dollars to scalpers, even matching each others’ bounties in gruesome competitions, offering prizes of as much as $1,000 for a single warrior’s scalp.

The Glanton gang combed the sparse Sonora Desert, attacking every Apache band small enough to massacre, especially on the lookout for defenseless women and children.

But the Apaches had no intention of giving into these scalpers. Apaches rallied together, killing scalpers and evaporating into the landscape, altogether spoiling the profitability of the vile scalp trade.

Glanton Overstays His Welcome in Mexico 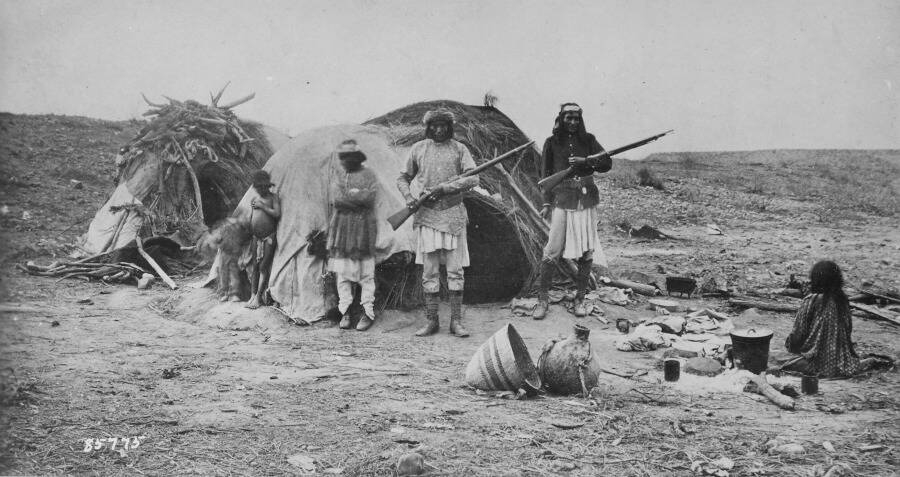 Before long, it seemed scalping had run its course. But Glanton had no intention of giving up, either. Instead, he turned his eye to the scalps of Mexican peasants and other Native Americans. Glanton figured no one could tell an Apache scalp from another Native American or Mexican scalp.

But when Mexican authorities realized that Glanton was taking Mexican scalps, governor Ángel Trías Álvarez of Chihuahua placed a bounty of $268,756 by today’s standard on Glanton’s scalp.

Fleeing as fast as he could with his remaining men, Glanton made his way to Sonora but he quickly wore out his welcome there and he and his gang had to escape north into Arizona.

Reaching the Colorado River that marked the border between Sonora and Arizona, Glanton discovered a ferry operated by a man named A.L. Lincoln (yes, a relative of that Lincoln), a fellow Mexican-American War veteran, who’d just made a fortune transporting immigrants across the river on their way to join the California gold rush.

It was Lincoln’s misfortune that his next passenger would be John Glanton.

Though Lincoln had agreed to employ six of Glanton’s men, the scalp-hunter thought the ferry too valuable an asset not to own all to himself. Glanton reportedly chased Lincoln out of the business and promptly took up robbing and extorting its passengers, charging as much as ten times the previous fares.

Neighboring Lincoln’s ferry was a rival operation run by a group of local Yuma Native Americans. Glanton managed to insult their chief and though the Yuma were naturally furious, they bided their time. 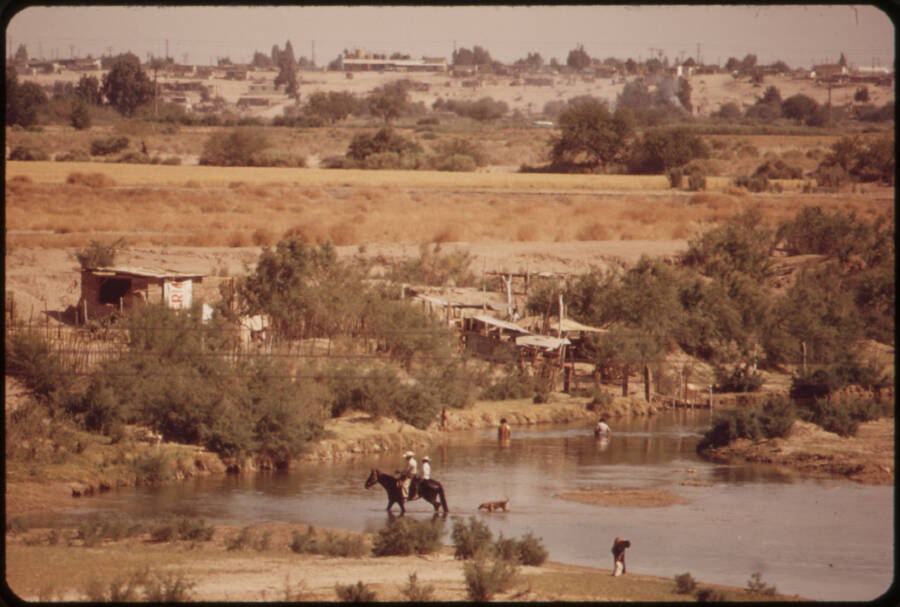 In late April 1850, Glanton and some of his men traveled into San Diego to bank the proceeds of their ferry racket, during which they made sure to murder at least one innocent bystander before traveling back. Arriving at their camp in the harsh midday sun, they immediately lay down for a siesta.

But even in sleep, there was no escape for Glanton from his own violence and greed.

The Yuma chief had patiently gathered hundreds of Yuma warriors and they rushed into Glanton’s camp as he and his men slept. The Yuma proceeded to beat, knife, and scalp all the men — Glanton included.

Glanton remained a little-known figure in history until the publication of Cormac McCarthy’s novel Blood Meridian, which was a mostly-accurate account of the scalp trade largely based on Samuel Chamberlain’s memoir.

Blood Meridian remains one of the few McCarthy novels considered to be unfilmable due to the nightmarish deeds of John Joel Glanton and his gang.

After reading about John Joel Glanton, the scalping pirate of the Wild West, look through these amazing color photos of what life was really like in the Old West. Then, check out these portraits of some of the most recognizable names on the frontier.