Scientists Find Mysterious Sounds At The Very Bottom Of The Ocean

Hear the first-ever Mariana Trench recording and discover exactly how it sounds in the deepest point in any ocean on planet Earth. 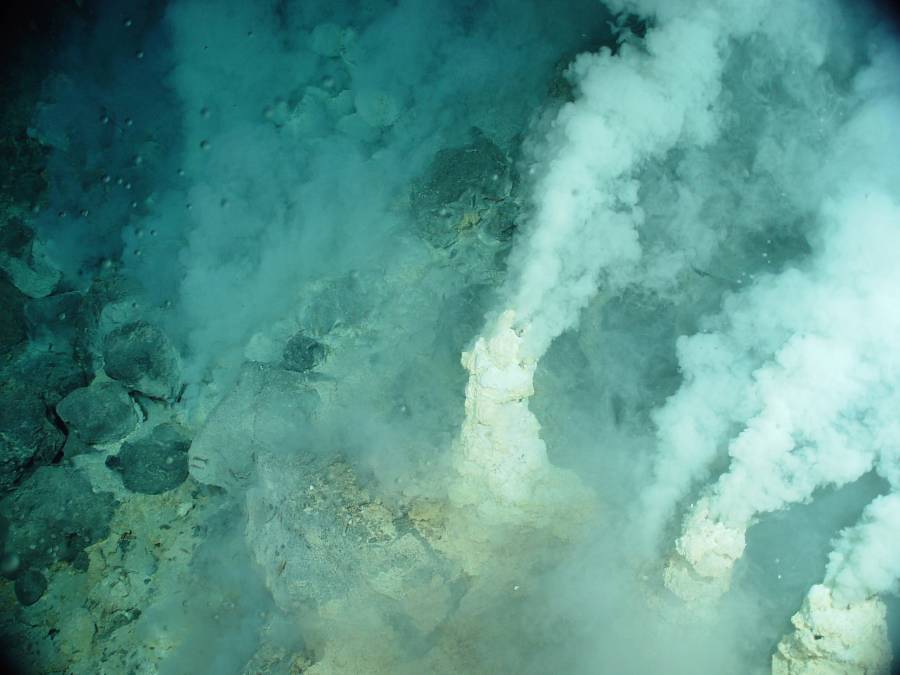 Hydrothermal vents like those above, line the depths of the sea floor at its lowest points. Image Source: Wikimedia Commons

Sunlight usually travels to just 680 feet below the ocean’s surface. At best, light can penetrate to depths of about 3,280 feet. Another six miles below that sits the deepest recorded point on Earth: a small depression in the Mariana Trench known as Challenger Deep.

At that depth, and with that lack of sunlight, Challenger Deep is both figuratively and literally shrouded in mystery. Only three people have ever made the journey down (including, most recently, filmmaker James Cameron in 2012), and our knowledge of its depths largely comes from sonar readings used to map the sea floor.

As for what it’s actually like that far down, what we know has come in the form of brief, hazy snatches from the only three men who’ve made the trip. Its feel has been compared to “ooze” and described as “gelatinous.” Its sights are limited by extreme darkness and consist mainly of small numbers of tiny amoebas, shrimp, sea cucumbers, and the like. And its sounds had largely been a mystery — until now.

Oceanographer Bob Dziak of the National Oceanic and Atmospheric Administration recently led the first team to ever record audio at Challenger Deep. More than any sonar readings or manned expeditions, these new recordings give us perhaps the best idea of what it’s truly like at the bottom of the ocean. According to Dziak, because of the lack of sunlight, “Acoustics is really the best way to get a good picture of deep ocean environments.”

Somewhat to the researchers’ surprise, the new Mariana Trench recording reveals both a noisy, discordant soundscape and the ability to hear, with shocking clarity, sounds made far away and high above. Amid the utterly alien baseline of noise, the researchers captured whale calls, ships passing, and even earthquakes in a way that’s never been done before.

The call of a baleen whale. Source: SoundCloud

The rumble of a magnitude five earthquake. Source: SoundCloud

The noise from a passing ship’s propellor. Source: SoundCloud

For a mind-boggling visual representation of just how deep the Mariana Trench goes, check out this ocean depth infographic. Then, check out seven of the most frighteningly bizarre ocean creatures.