Unfortunately, this is not the first time scientists have found trash in the deepest part of the ocean. 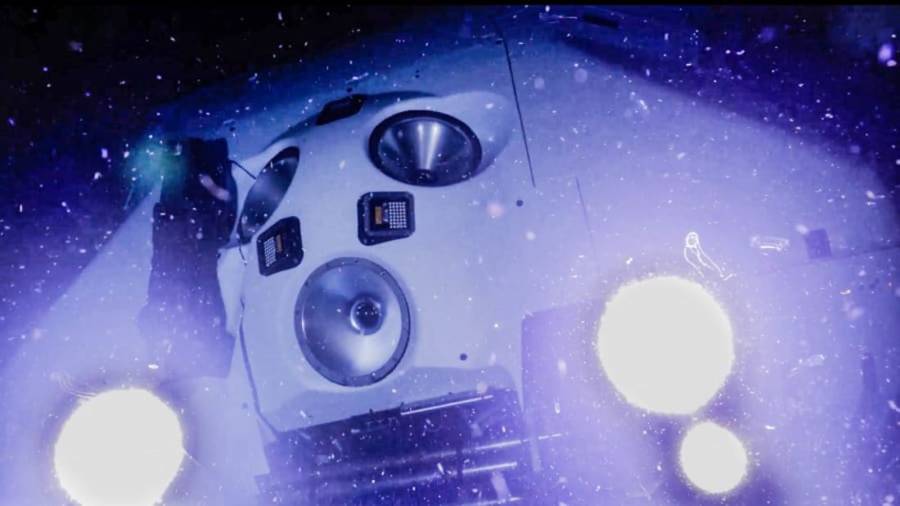 The advancement of new technologies continue to push the boundaries of human exploration. They also make us more aware of the disturbing extent of human pollution.

According to the BBC, Victor Vescovo descended nearly seven miles to the deepest place in the ocean — the Pacific Ocean’s Mariana Trench. The expedition established Vescovo as the record-holder for the world’s deepest dive.

“It is almost indescribable how excited all of us are about achieving what we just did,” Vescovo said. “This submarine and its mother ship, along with its extraordinarily talented expedition team, took marine technology to a ridiculously higher new level by diving — rapidly and repeatedly — into the deepest, harshest area of the ocean.”

Vescovo, a private equity investor from Dallas, Texas who has also climbed to the the world’s highest points as an explorer, spent four hours exploring the remote bottom of the Mariana Trench with members of his expedition crew. The team believes it has discovered four new species of amphipods, a type of crustacean.

They also saw some rare marine wildlife in their deep water habitat, including a spoon worm at 23,000 feet and a pink snailfish at 26,000 feet.

Although the impressive nearly 36,000-foot descent marks a new era in underwater exploration, the latest expedition into the deepest point on earth also found something disturbing: a plastic bag and candy wrappers. 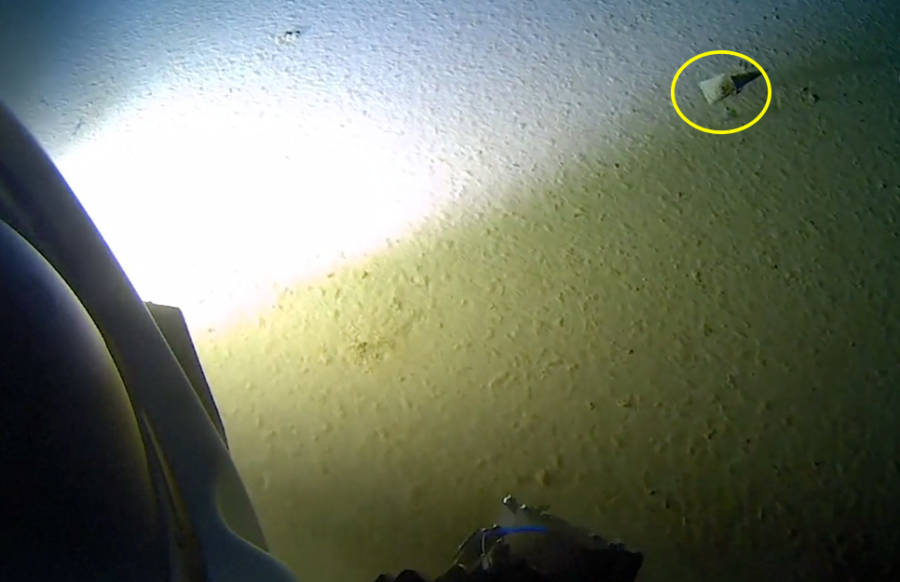 Sadly, plastic pollution has been discovered in the deep corners of the ocean by other explorers before — in fact, this is the third time plastic has been documented in the lowest underwater point on earth — but the finding is still a startling reminder of how much humans have negatively impacted the planet.

According to National Geographic, a study from October 2018 documented what is still the deepest known piece of plastic to be found inside the Mariana Trench, which was discovered through the Deep-Sea Debris Database. Scientists were able to sift through the collection of photos and videos taken from 5,010 dives over the last 30 years and came upon the horrific discovery.

Scientists from the Vescovo expedition plan to test the creatures they collected during the deep dive to see if they contain microplastics. A study published in February found that amphipods in six deep-sea trenches had ingested microplastics, a tiny type of plastic that originates from larger plastics that have broken down, as well as from beauty products like toothpaste and facial scrubs with microbeads. 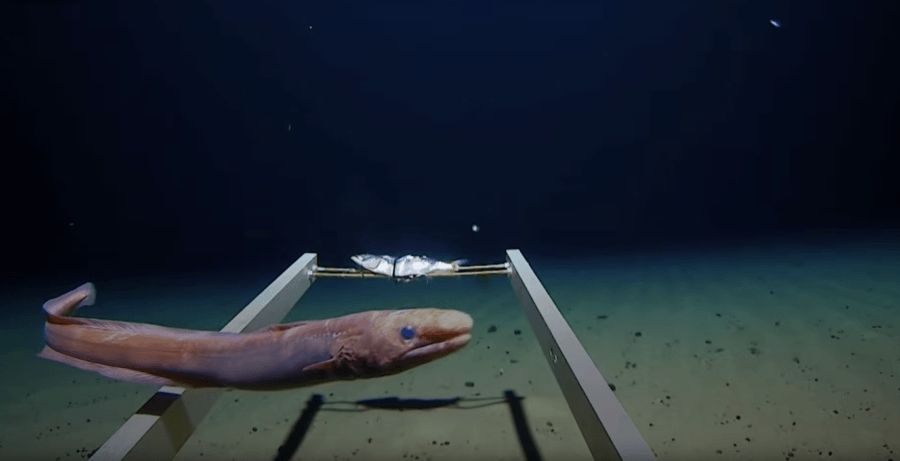 BBC News/YouTubeVescovo found arrowtooth eels at the bottom of the Mariana Trench, among other deep-sea species.

Vescovo is the fourth person ever to dive to the deepest part of the Mariana Trench, known as the Challenger Deep. The first to perform this incredible feat was U.S. Navy Lieutenant Don Walsh and Swiss engineer Jacques Piccard in a vessel called the Bathyscaphe Trieste back in 1960.

“I salute Victor Vescovo and his outstanding team for the successful completion of their historic explorations into the Mariana Trench,” Walsh told the BBC. “Now in the winter of my life, it was a great honor to be invited on this expedition to a place of my youth.” Walsh and Piccard spent 20 minutes exploring the depths of the sea, but had to resurface earlier than planned because the vessel’s window cracked during its descent.

Walsh was also present when Hollywood director James Cameron conducted the second manned deep-dive plunge inside a bright green vessel in 2012. After going into the dark pit of the Mariana Trench, the Titanic director said that he felt like he was on another planet.

While manned deep dives into the Pacific’s Mariana Trench are still rare, robotic landers and other unmanned vehicles have been sent to collect samples from the sea floor a few times before. Two Japanese vessels have gone to the bottom of the trench, as did a U.S. vessel in 2009.

The Mariana Trench expedition is part of the Deep Five exploration into the five deepest points under the sea.

Sea exploration in waters as deep as the Mariana Trench pose a number of challenges for scientists. The most obvious challenge is the extreme danger a deep-dive poses to the human body. The pressure at the bottom of the ocean is 1,000 bars, the equivalent of 50 jumbo jets piled on top of each other.

Vescovo’s vessel, the DSV Limiting Factor, was built with a 3.5 inch-thick titanium pressure hull at its core. The mini chamber can fit two people, allowing dives to be performed solo or in pairs. So far, the high-tech designed vessel has been used by Vescovo’s team in five separate dives to the bottom of the trench.

The deep water ecosystem is also pitch black and freezing cold, making it difficult for sea explorers to properly document their findings. For this historic expedition, the crew teamed up with Atlantic Productions to shoot the underwater footage that will be used in a documentary for the Discovery Channel. 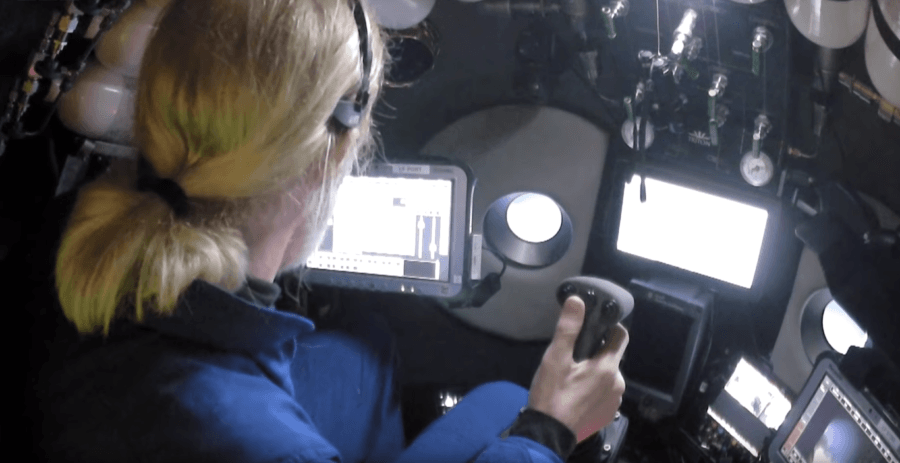 BBC News/YouTubeVictor Vescovo mans his vessel at the deepest part of the ocean.

Anthony Geffen, creative director of Atlantic Productions, said it was the most complicated filming he’d ever done.

“Our team had to pioneer new camera systems that could be mounted on the submersible, operate at up to 10,000m [32,800 feet] below sea level and work with robotic landers with camera systems that would allow us to film Victor’s submersible on the bottom of the ocean,” Geffen explained. The camera team also had to design new rigs to record inside the vessel.

So far, the team has descended to bottoms of four of the world’s deepest trenches. Their final challenge will be to dive and explore the remote bottom of the Molloy Deep in the Arctic Ocean in August.

Now that you’ve learned about the deepest manned sea dive into the Mariana Trench, read about the deep-sea fish species that would melt at the surface. Then, take a look at seven of the most bizarre ocean creatures.