At some seven miles below the surface, Challenger Deep is not only the deepest part of the ocean, it's an alien world unlike no other. 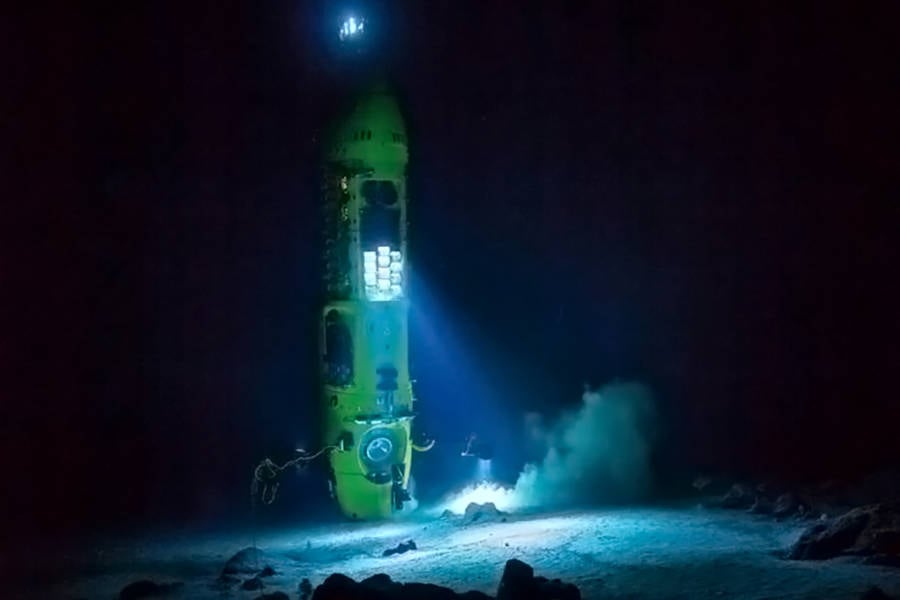 Mark Thiessen/National Geographic CreativeJames Cameron’s Deepsea Challenger touches down at Challenger Deep, the deepest part of the ocean, in 2012.

On January 23, 1960, Swiss oceanographer Jaques Piccard and U.S. Navy Lieutenant Don Walsh had the unique experience of exploring a place no human in history had been before: the deepest part of the ocean, now known as Challenger Deep.

Navigating from within a cramped, pressurized sphere, the two men sat huddled together, barely moving for nearly five hours as they made their descent to the bottom of the Mariana Trench in the western Pacific some 200 miles southeast of Guam.

The world outside of their porthole was illuminated by a powerful light, although as they continued their journey all sunlight and color slowly evaporated until they were left in complete blackness apart from the illumination of their own beam. The eerie silence was only penetrated by conversation and, as Piccard recalled, “crackling sounds, like ants in an ant hill, little cracking sounds coming from everywhere.” 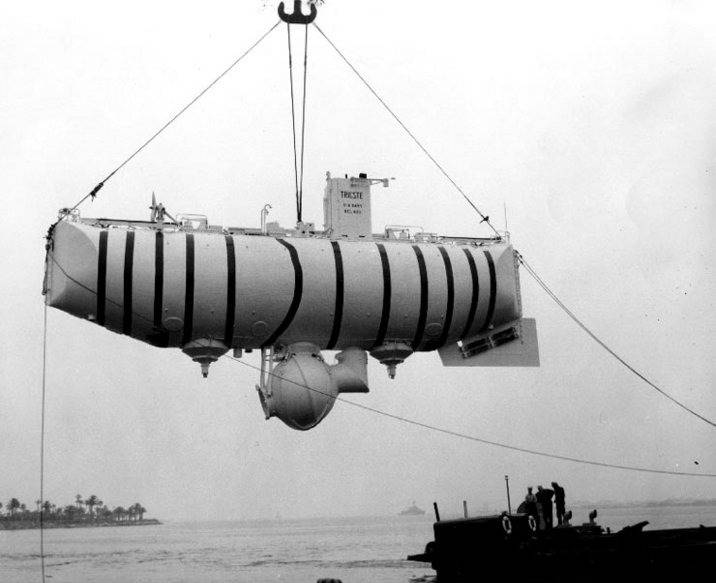 Wikimedia CommonsThe Trieste, the vessel that Piccard and Walsh took to Challenger Deep.

When they finally reached their goal, the two men hesitantly attempted to contact their team back at base using a specially-constructed communication device. They were unsure they would even succeed because no communication of this type had ever been attempted before.

To their surprise and relief, a voice from the other end of the line replied, “I hear you weakly but clearly. Please repeat the depth.” Walsh triumphantly responded, “Six three zero zero fathoms” — some seven miles below the surface of the sea.

A Dive Into Challenger Deep 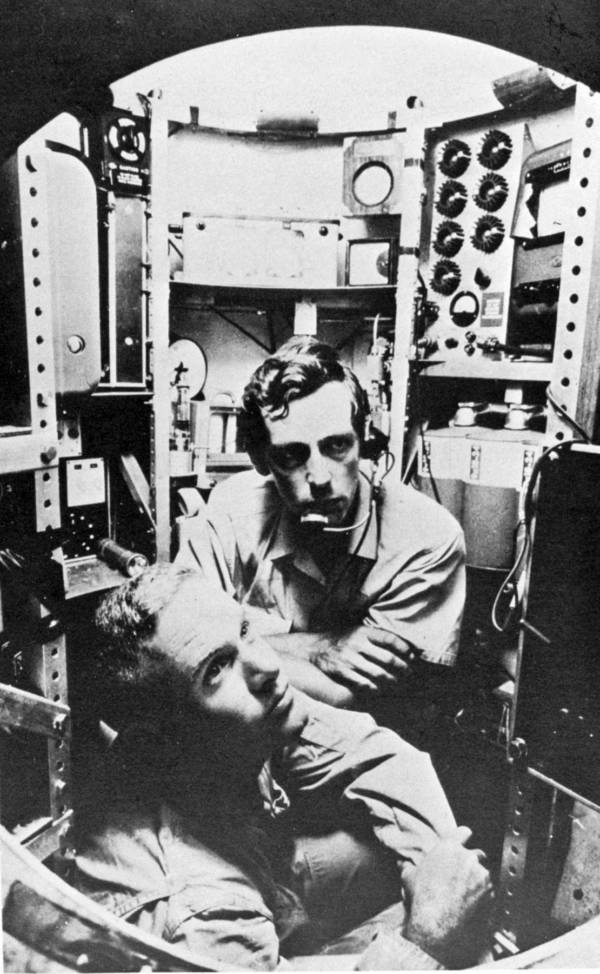 Wikimedia CommonsWalsh and Piccard in their claustrophobic vessel.

Piccard and Walsh’s voyage to the deep had occurred during the much more widely-celebrated Space Age, a decade when humans were leaving Earth’s boundaries and treading on the moon. Yet where the two men had explored, Challenger Deep, was arguably the real last frontier.

Oceanic trenches of this magnitude are formed when two tectonic plates collide and one piece of the crust sinks under the other, creating a kind of chasm. Challenger Deep lies at the southern end of the trench, near the island of Guam.

A Sci-Fi Landscape At The Deepest Part Of The Ocean 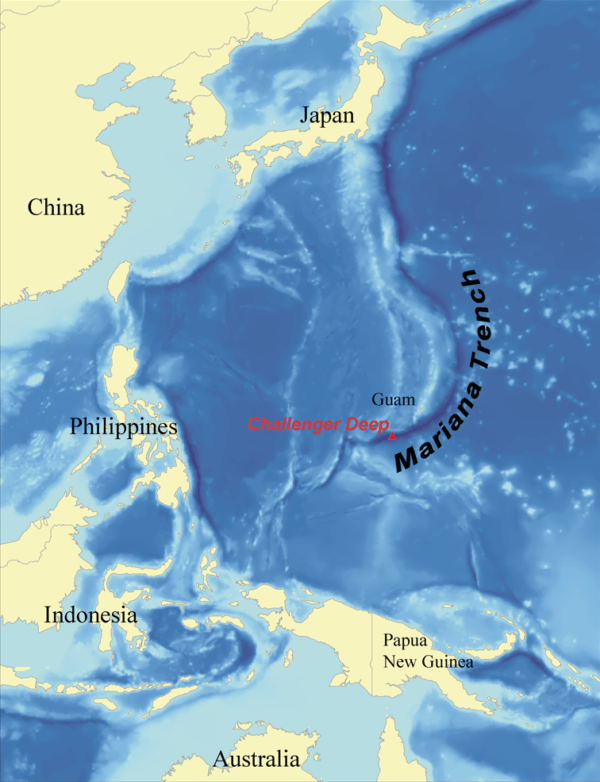 This area of the ocean floor more closely resembles something from a science fiction novel rather than any other landscape on Earth.

Underwater vents cause liquid sulfur and carbon dioxide to bubble up from the crescent-shaped vent. No natural light penetrates at the depth of the trench and temperatures are only a few degrees above freezing.

The water pressure at Challenger Deep is an astounding 1,000 times greater than the pressure at sea level. Yet despite the crushing pressure, frigid cold, and eternal darkness, life manages to exist. 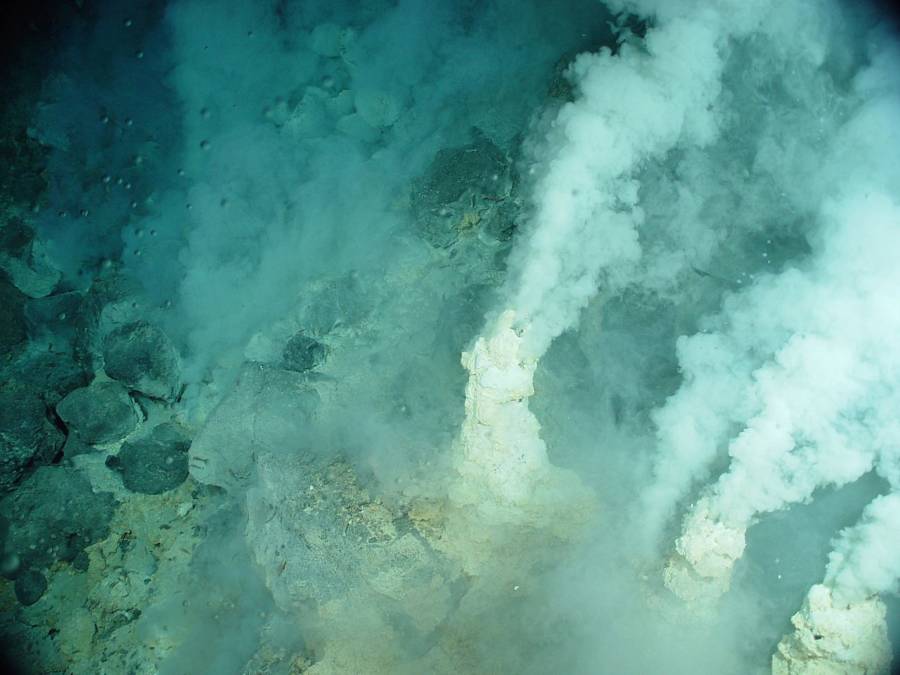 Wikimedia CommonsHydrothermal vents like these line the floor of the Mariana Trench.

The crew of the 1960 expedition miraculously spotted a fish at Challenger Deep during their dive, proving for certain that life could exist in such a place. As Piccard later said:

“And as we were settling this final fathom, I saw a wonderful thing. Lying on the bottom just beneath us was some type of flatfish, resembling a sole, about 1 foot [30 cm] long and 6 inches [15 cm] across. Even as I saw him, his two round eyes on top of his head spied us – a monster of steel – invading his silent realm. Eyes? Why should he have eyes? Merely to see phosphorescence? The floodlight that bathed him was the first real light ever to enter this hadal realm. Here, in an instant, was the answer that biologists had asked for the decades. Could life exist in the greatest depths of the ocean? It could! And not only that, here apparently, was a true, bony teleost fish, not a primitive ray or elasmobranch. Yes, a highly evolved vertebrate, in time’s arrow very close to man himself. Slowly, extremely slowly, this flatfish swam away. Moving along the bottom, partly in the ooze and partly in the water, he disappeared into his night. Slowly too – perhaps everything is slow at the bottom of the sea – Walsh and I shook hands.”

It has been speculated, however, that the fish the team spotted was actually a sea cucumber because most scientists theorize that a vertebrate organism could not survive at such crushing pressures. Sea cucumbers and other microorganisms have been found in other parts of the Mariana Trench, where they are able to subsist off of the methane and sulfur from the vents on the ocean floor.

Recent data does show that some microorganisms have been shown to live at Challenger Deep.

A History Of Explorations 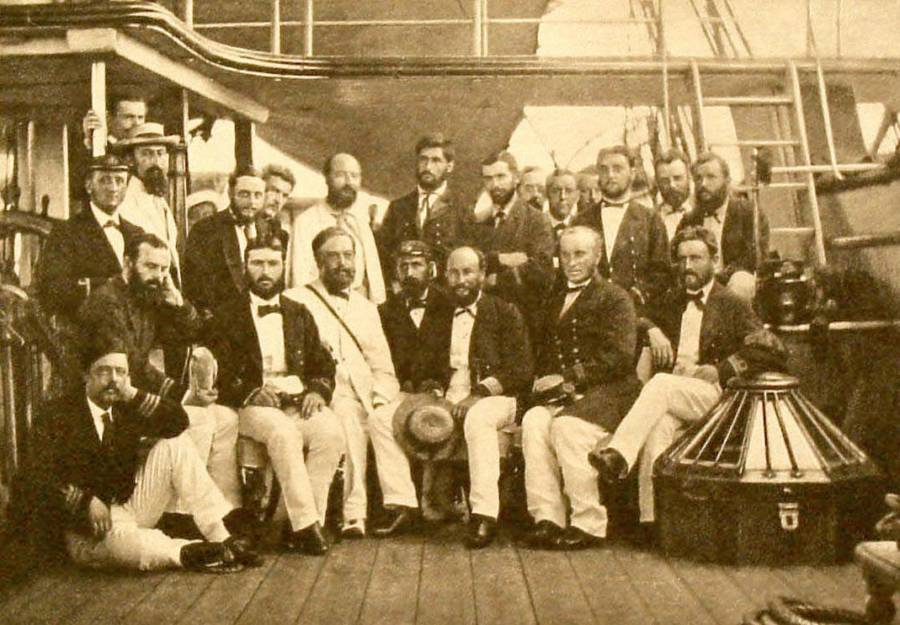 Wikimedia CommonsThe crew of the 1872 Challenger expedition, which was the first to explore the depths of the world’s oceans and discover Challenger Deep, the deepest part of the ocean.

Although humans have been navigating the seas for thousands of years, “the reality is we know more about Mars than we know about the oceans,” marine biologist Sylvia Earle explained. It was only relatively recently that ships’ crews began to concern themselves with the depths of the ocean rather than just its surfaces.

In 1875, the British ship HMS Challenger set out on the first global marine research expedition. Her crew was the first to discover the Mariana Trench and, using the rather primitive equipment of a weighted sounding rope, measured its depth to be about 4,475 fathoms, or 26,850 feet.

Nearly 75 years later, a second British ship, the HMS Challenger II returned to the same location and was able to explore the deepest part of the trench using the more advanced technology of echo sounding. This time, they recorded a depth of 5,960 fathoms, or 35,760 feet.

It is from these two ships, the first to map out its location, that Challenger Deep takes its name. In 1960, not even a century after its discovery, the American team was able to reach its bottom.

Humans would not reach the floor of Challenger Deep again for over five decades. Although two unmanned submarines were sent on separate expeditions in 1995 and 2009 (one Japanese and one American), it was not until director James Cameron of Titanic fame plunged the depths in his own expedition that a manned vehicle would reach the bottom.

Cameron became only the third person in history (and the first person solo) to reach and explore Challenger Deep.

Over the course of seven years, Cameron developed his own personal submarine with the help of a team in Australia and the sponsorship of National Geographic. The vessel’s pilot sphere was so tiny that Cameron was unable to fully extend his limbs during the several hours he spent submerged.

Unlike his predecessors, it only took the director about two and a half hours to descend the nearly seven miles to Challenger Deep. Also in contrast to the previous manned expedition to Challenger Deep, Cameron’s vessel was equipped with arms to take samples from the ocean floor, as well as 3-D video cameras.

Another look at James Cameron’s trip to the deepest part of the ocean.

In 2014, Cameron released the film Deepsea Challenge, which consisted mainly of the videos he had taken on his expedition to Challenger Deep.

The extraordinary footage made the most mysterious place on the planet accessible to thousands of people, bringing the black, cold depths of the deepest ocean vividly to life like never before.

After this look at Challenger Deep, the deepest part of the ocean, check out some of the strangest deep sea creatures ever found. Then, read about the prehistoric fish known as the Coelacanth, which scientists thought had gone extinct millions of years ago.