The President Is A… 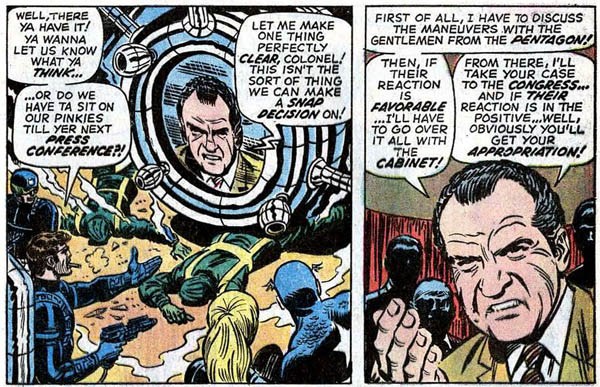 MarvelRichard Nixon appearing in a 1974 edition of Captain America.

Marvel has never shied away from taking shots at presidential follies. In fact, Marvel storylines have portrayed the President of the United States as, among other things, Satan himself (Incredible Hulk, 1974). In addition, Marvel has presented Nixon as the leader of a cabal plotting to overturn America (Captain America, 1974), and turned Reagan into an evil snake man (Captain America, 1988).

As for presidential candidates, Barack Obama got a cover cameo with Spiderman (The Amazing Spider-Man, 2009) but Donald Trump appears to have surfaced as a cosmic super-villain…

MODAAK: Donald Trump As A Supervillain 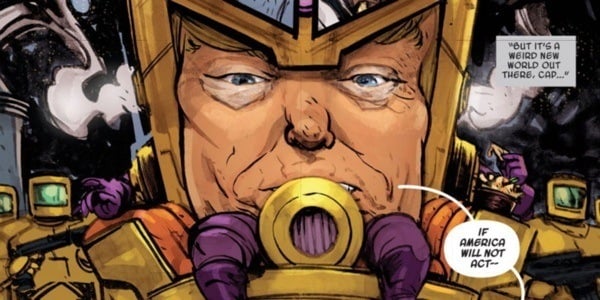 Earlier this year, Marvel made headlines by introducing MODAAK, a new supervillain who seemed an awful lot like Donald Trump. MODAAK has Trump’s big head, characteristic orange skin and white patches under the eyes, and is said to have tiny hands.

This character debuted in Spider-Gwen Annual #1. According to the storyline, MODAAK is fighting a losing battle with female Captain America, who in the alternate universe of this comic is an African-American woman. The racist supervillain gets hammered by Captain America, which may or may not foreshadow the results of the election this November.