In the mid-19th century, Mattie Blaylock left her farm life in Iowa behind and eloped with Wyatt Earp, but ended up abandoned by the lawman after the Gunfight at the O.K. Corral. 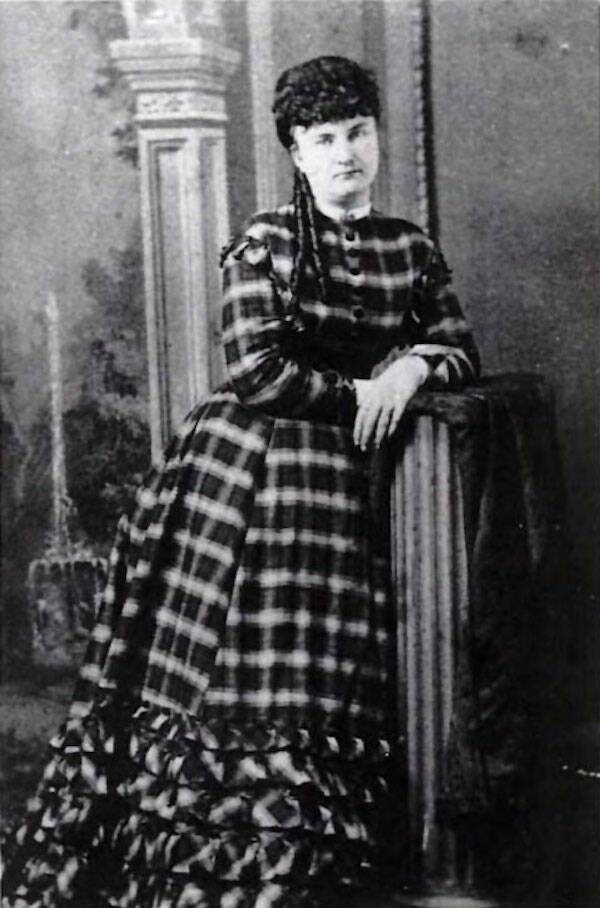 Wikimedia CommonsMattie Blaylock ran away from home when she was 18.

Mattie Blaylock spent her entire childhood learning scripture and attending church. Raised by devout parents on Iowa farmland, she yearned for freedom and a life of adventure. With no intentions to waste time and wait to be married off, Blaylock took destiny into her own hands and ran off — then met a man named Wyatt Earp.

While the gunsmoke of the Civil War had settled, life in the American frontier was no picnic. Of the countless prospectors who rushed west to mine silver, only a few became rich. The rest struggled to get by or gambled their fortunes away while destitute women like Blaylock relied on prostitution and cowboys terrorized towns.

It was amidst the chaos that Blaylock made her younger self proud and chose her own husband. She would marry Earp long before his gunfight at the O.K. Corral made him a legend. While Earp would be valorized by films like Tombstone (1993), Blaylock’s story remains lesser-known, from her lifelong loyalty to her fatal addictions.

The Life Of Mattie Blaylock

Born Celia Ann Blaylock in 1850 in Johnson County, Iowa, she was raised on a small farm near the town of Fairfax. Her parents, Henry Blaylock and Elizabeth Vance, had left Indiana in 1846 and built a quiet life for themselves and their kids. Their farm lay near a main railroad stop where drifters asked for food and water.

According to Edward C. Meyers’ Mattie: Wyatt Earp’s Second Wife, Blaylock was the youngest of three children and her family’s second daughter. Her father hoped to turn their farm into a profitable business and regularly brought his kids along on trips into Fairfax to procure supplies and network with the locals.

Blaylock’s early childhood consisted of little more than Sunday school and strict adherence to contemporary household rules, and her parents subscribed to the notion that sparing the rod would spoil the child. 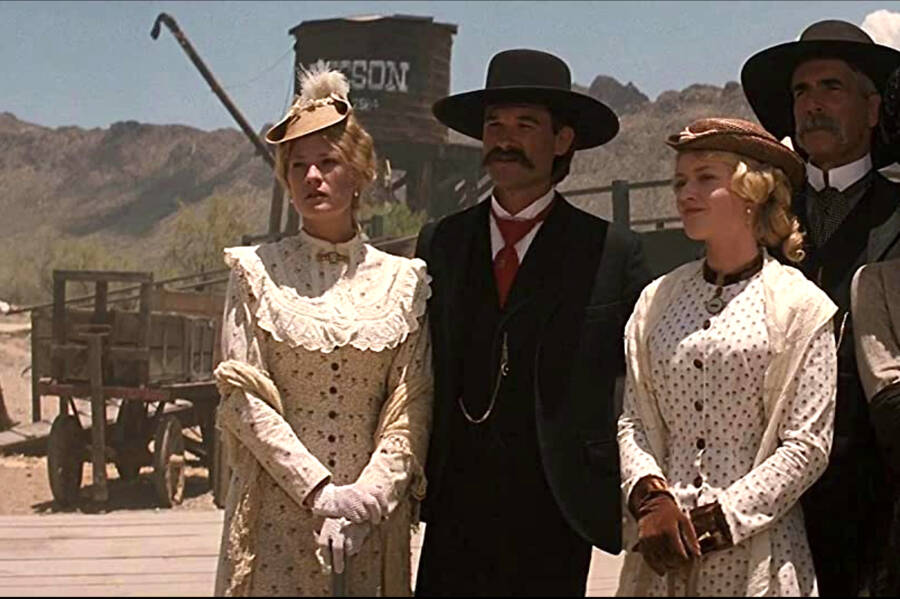 Blaylock’s teenage years featured community picnics and barn dances that she and her sisters enjoyed. However, she was well aware that she would soon be married off to likely live out her life as a housewife.

As the oldest, Martha Jane Blaylock was the first to be married in 1860, when she was 17. Blaylock and her sister Sarah, meanwhile, rejected their prospective suitors and soon hatched a plan to escape and see the world.

The moment came between March and October of 1868, when the two adult sisters left town without money or permission from their parents. While Sarah would turn back within months after life on the road proved difficult, Blaylock forged ahead — and adopted the name “Mattie.”

The Abandonment And Death Of Mattie Earp

While Blaylock’s first few years as a drifter are largely undocumented, by around 1872, she was working as a prostitute in Fort Scott, Kansas, then later settled in Dodge City — where she’d meet Earp.

Earp had grown into a grizzled widower after his first wife, Urilla Sutherland, died of typhoid fever in 1870. He reportedly worked on a floating brothel thereafter and married teenage prostitute Sally Heckell, who was busted alongside him on Sept. 10, 1872, and identified herself as his wife. However, the union wouldn’t last.

Earp moved to Wichita, Kansas, and worked as a shotgun guard for Wells Fargo. He became a deputy before settling in Dodge City as assistant marshal. It was here that he met Mattie Blaylock, with whom he started an affair and moved to the town of Tombstone on Dec. 1, 1879. The United States Census confirmed her as his common-law wife by 1880. 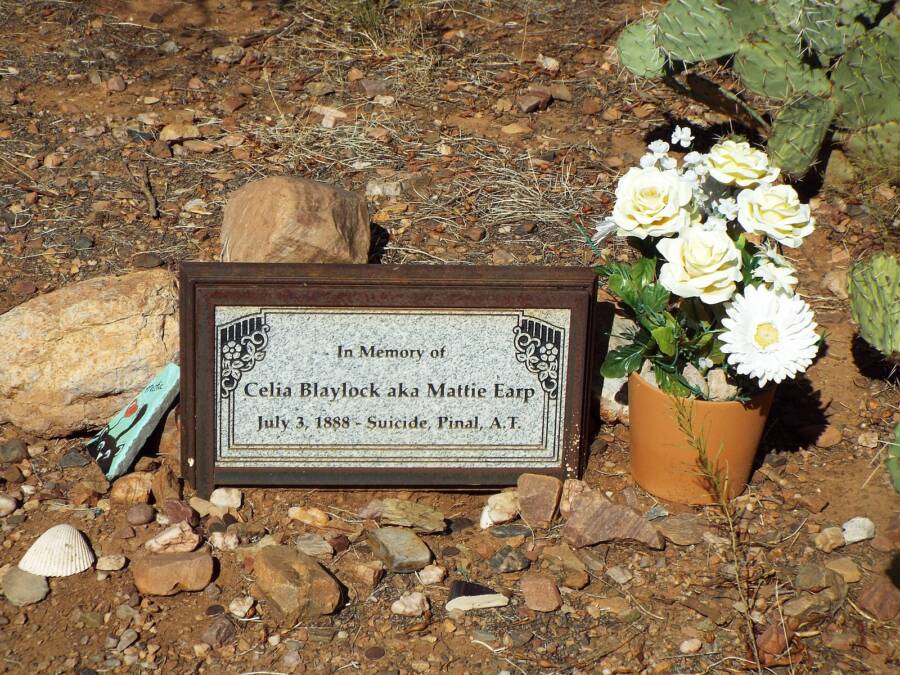 While Blaylock grew dependent on laudanum to treat her headaches, Earp was increasingly embroiled in deadly conflict as a newfound deputy sheriff. The Cochise County Cowboys were initially a mere nuisance, but killed marshal Fred White on Oct. 28, 1880 — and would spark the gunfight at the O.K. Corral in 1882.

On Oct. 26, the Earps were ambushed by the cowboys in broad daylight. While they survived without a scratch after 30 seconds of gunfire, Blaylock had already been wounded — as Earp had already met Josephine “Sadie” Marcus months ago.

Earp would send his siblings, their wives, and Blaylock to California after the murder of his brother Morgan. He promised Blaylock a telegram with instructions on where to reunite when it was safe, but never did. Instead, he married Marcus within weeks and never spoke of Blaylock again.

Heartbroken and addicted, Blaylock tried her best to prevail. She hoped to return to the days of bustling mining town prostitution, but the boom had passed, and Blaylock withered. Her poor lifestyle would see her age out of favor, while her laudanum addiction saw her die of “suicide by opium poisoning” on July 3, 1888.

After learning about Mattie Blaylock, read about Wyatt Earp’s other wife Josephine Earp. Then, take a look at 48 snapshots of life in the real Wild West.