The Middle East — birthplace of civilization — stands to lose millennia of history due to ongoing conflicts, ISIS, and climate change.

The United Nations Educational, Scientific, and Cultural Organization — more commonly referred to as UNESCO — has honored over 1,000 cultural and natural destinations around the world as World Heritage sites of “outstanding value to humanity.” But many of these UNESCO sites are under threat.

In the Middle East, 15 sites are officially designated as endangered. Some simply cannot endure the constant tread of tourists’ stampeding feet, but others are targets of ISIS campaigns of terrorism and vandalism. In Syria, all six of the country’s World Heritage sites are now endangered by the ongoing, atrocious civil war.

The gallery below offers a tour through the Middle East’s 15 UNESCO World Heritage sites that may not survive our troubled times: 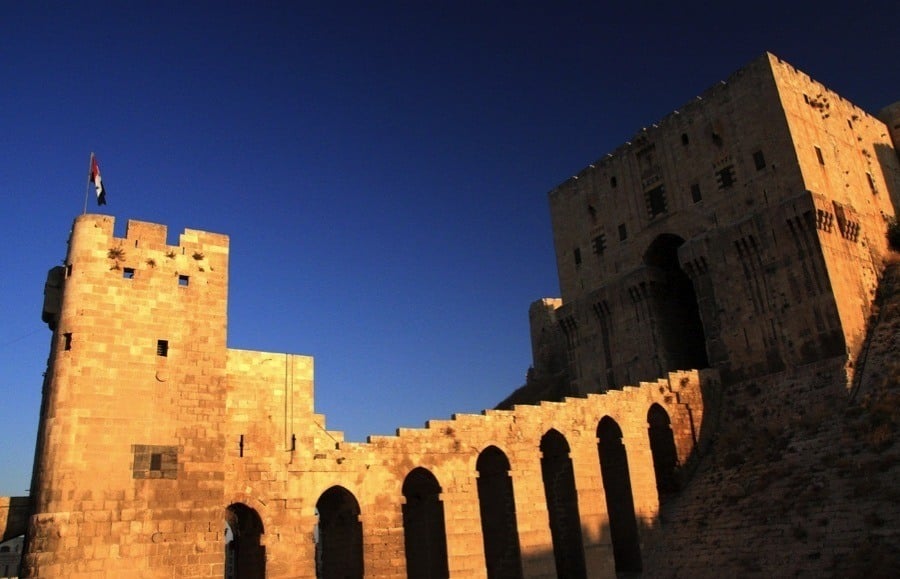 Human beings have lived and died in Aleppo for at least 7,000 years. Over the last 1,000 years or so, its citizens have built stunningly beautiful palaces and houses of worship as well as the impressive 13th century fortress shown above. This tapestry of architectural expression earned Aleppo World Heritage honors in 1986. But since the Syrian civil war began, as UNESCO has noted, “Aleppo's citadel had been caught in the line of fire.” Image source: Flickr 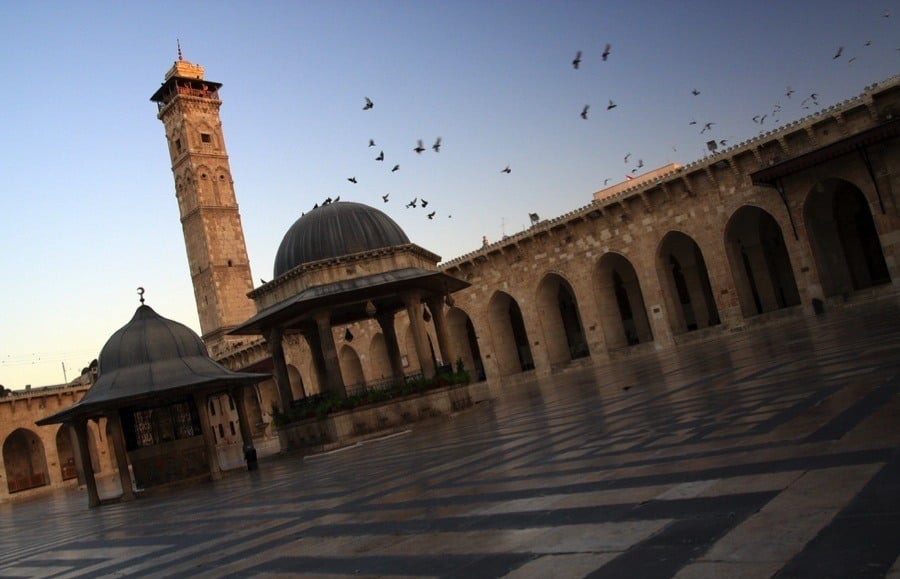 Reporting on the conditions in Aleppo, UNESCO further stated, “The old city witnessed some of the [Syrian] conflict’s most brutal destruction.” For example, the minaret of the gorgeous, 12th century Umayyad Mosque was completely destroyed during the fighting. This photo shows the mosque as it was before the war. Image source: Flickr 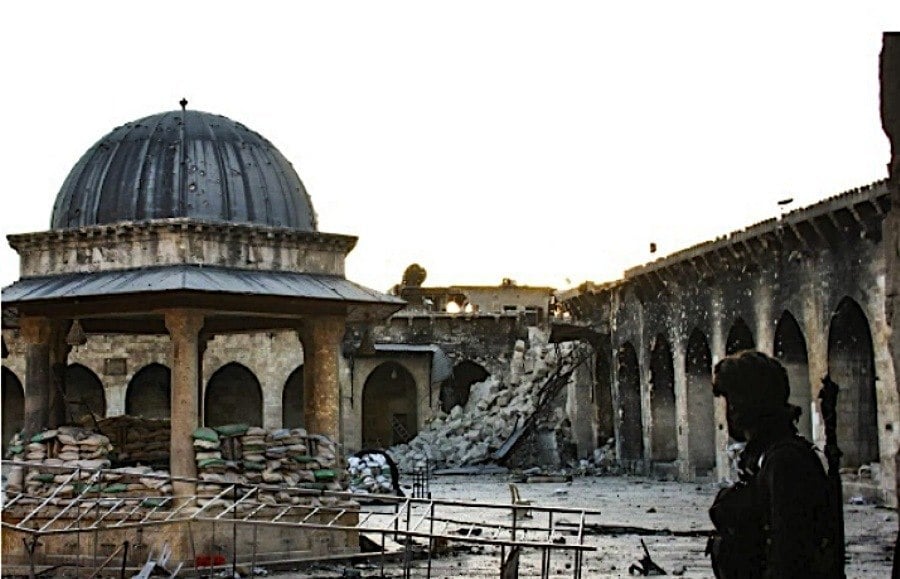 This image, from an article by researchers Gabriele Fangi and Wissam Wahbeh, shows the collapsed minaret. It was struck by tank fire as government forces advanced on rebels who had taken up positions inside the mosque. Image source: eujournal.org 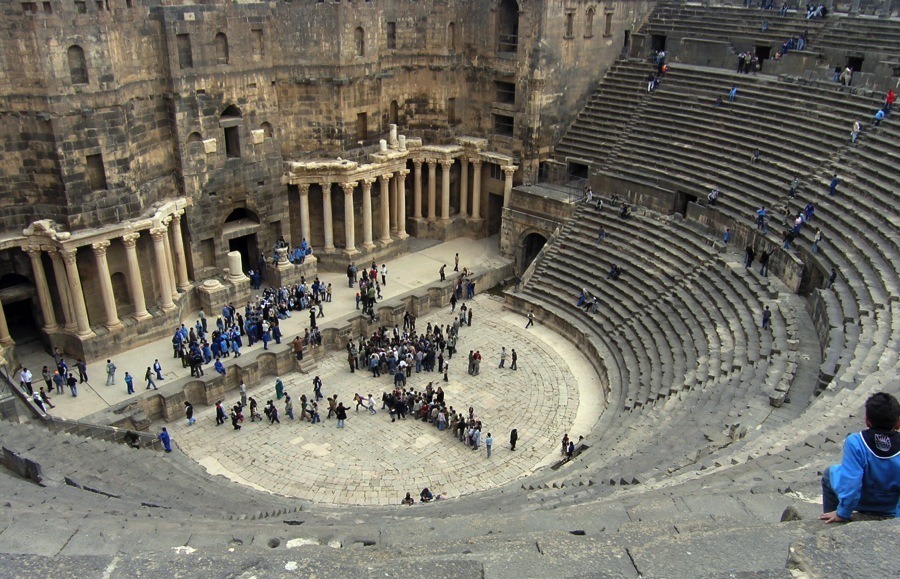 Bosra already had at least 1,500 years of history when the Romans conquered it in the year 106. The Roman era saw the construction of a massive theater, shown above. Image source: Flickr 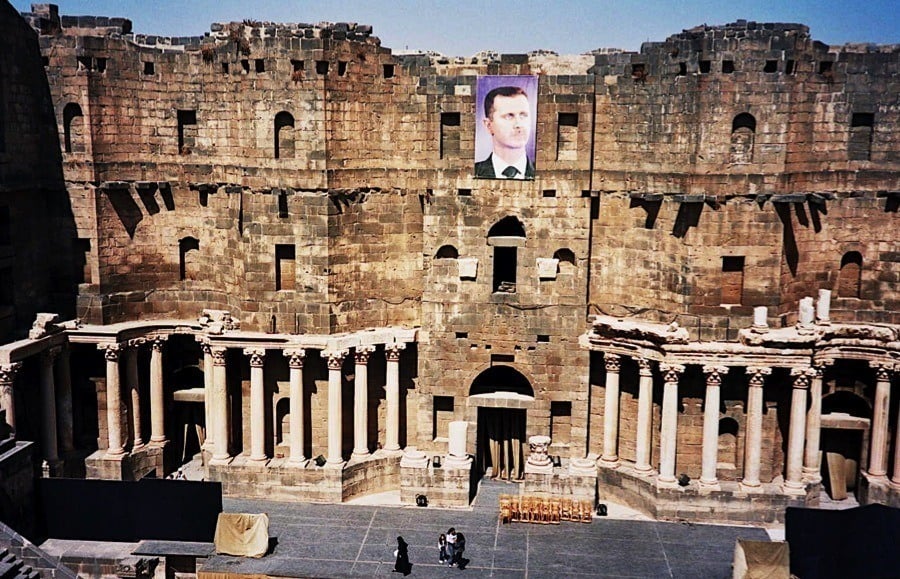 The corrosively corrupt and violent regime of Bashir al Assad, whose portrait stares over the Bosra theater in the image above, eventually led to a rebellion following the Arab Spring of 2011. Bosra itself has seen its share of the fighting during the current civil war. One ten-year-old refugee who grew up there told a British news station that she had seen severed heads and corpses lying in the streets. Image source: Flickr 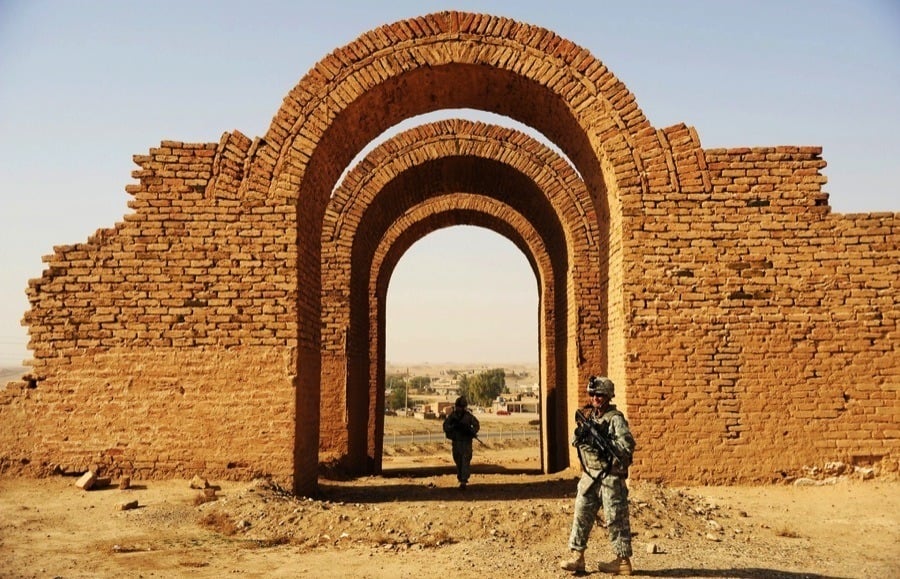 This was the capital of the Assyrian Empire, the power that ruled Mesopotamia around 3,000 years ago. The ruins of the ancient city of Ashur, also called Qal'at Sherqat, have been on UNESCO’s threat list since 2003 due to a planned dam project that would have flooded the site. The dam project was interrupted - perhaps indefinitely - by the U.S. invasion, but the site has remained endangered due to the subsequent hostilities and the possibility that the dam could still one day be built. Image source: Flickr 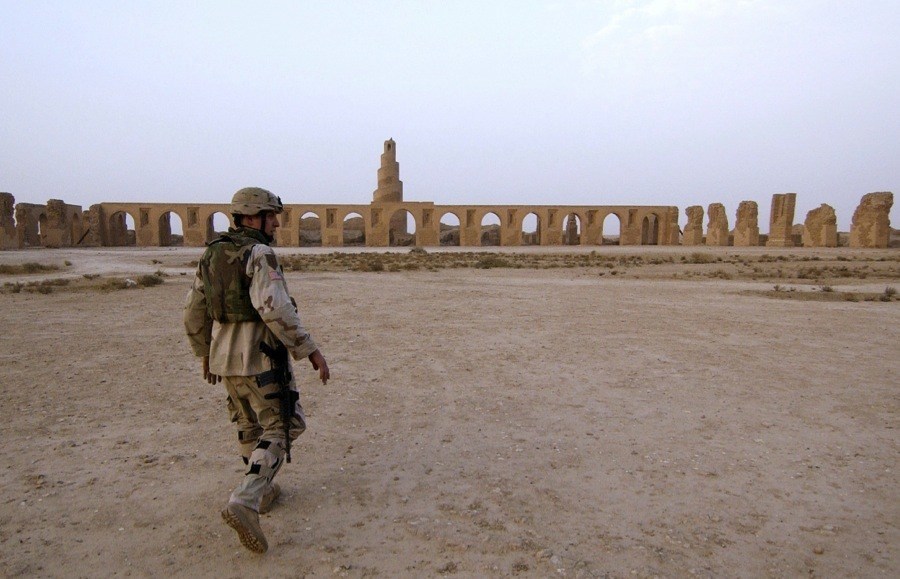 In the 9th century, Samarra was a thriving Islamic capital on the banks of the Tigris River. It was home to palaces and massive mosques with spectacular spiraled minarets, such as the one seen in the distance in this photo. UNESCO put Samarra on the endangered list in 2007 due to the Iraq war. Image source: National Archives 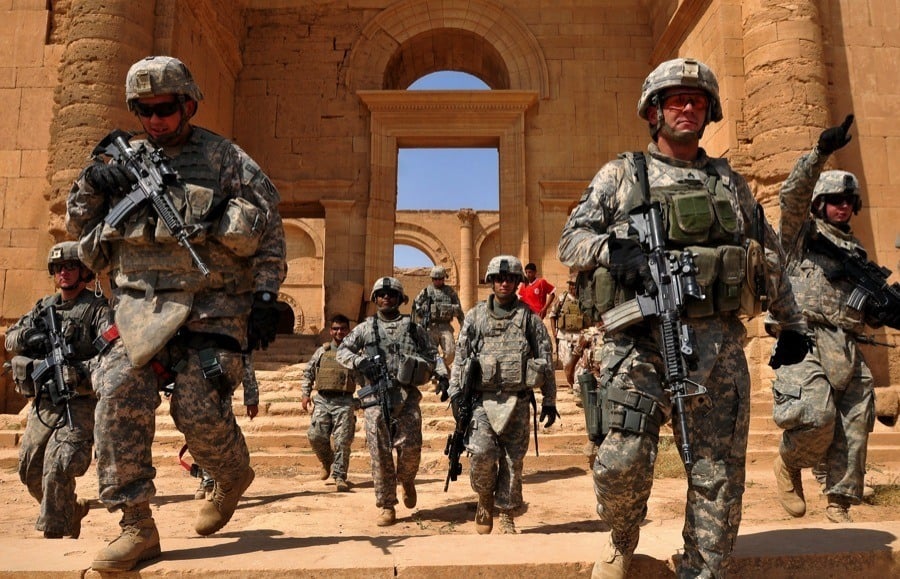 Heavily influenced by both Persian and Greek architecture, the ancient city of Hatra was built over two millennia ago. It was a wealthy and powerful city, and more than once the Romans tried - and failed - to take it over. This photo shows U.S. soldiers touring the site in 2010. Image source: DVIDS 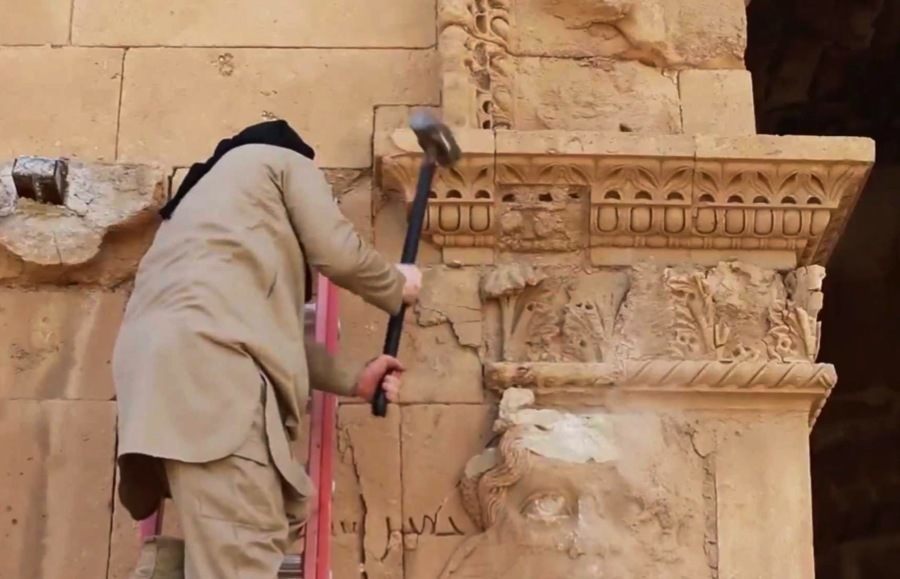 Hatra has been a UNESCO World Heritage Site since 1985, but in 2015, ISIS militants who controlled the area began destroying the irreplaceable monuments and sculptures of the ancient city. UNESCO quickly added Hatra to its endangered list. Image source: Voice of America 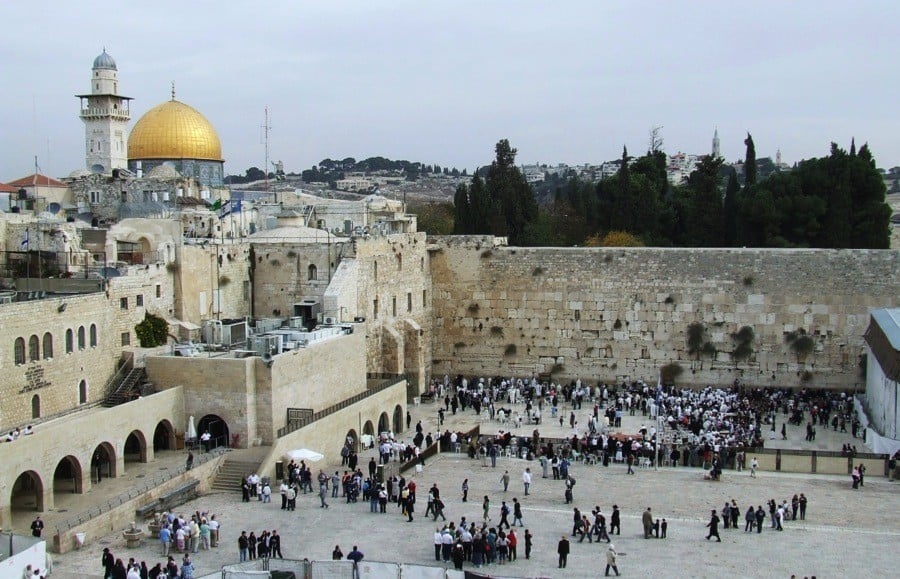 UNESCO enshrined the “Old City of Jerusalem and its Walls” as a World Heritage Site in 1981. As a sacred setting for the world’s three major monotheistic religions, Jerusalem hosts numerous historical sites and monuments important to Jews, Christians, and Muslims. Image source: Flickr 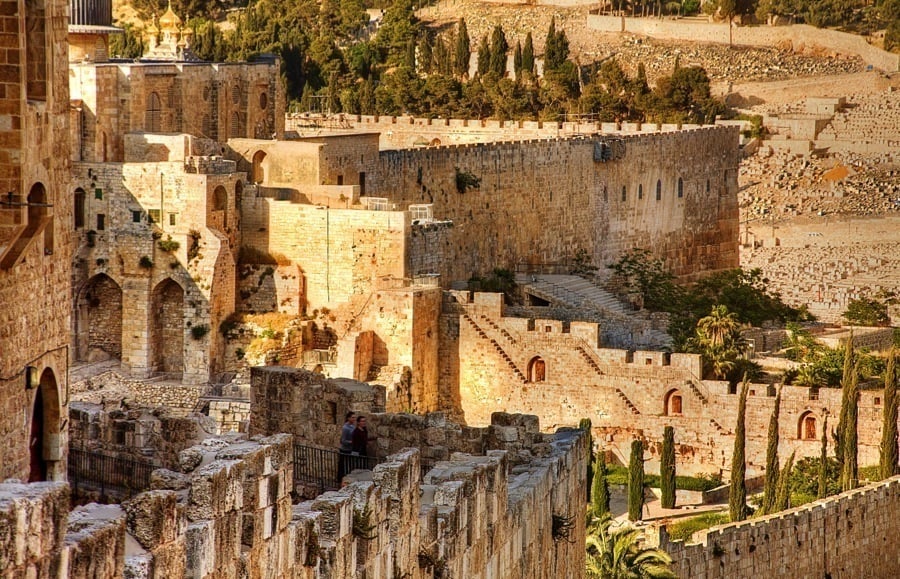 A year after being put on the UNESCO World Heritage list, Jerusalem was added to the inventory of endangered sites. UNESCO made this determination due to “the destruction of religious properties, threats of destruction due to urban development plans, deterioration of monuments due to lack of maintenance and responsible management, as well as of the disastrous impact of tourism on the protection of the monuments.” Image source: Flickr

7. Church of the Nativity, Palestine 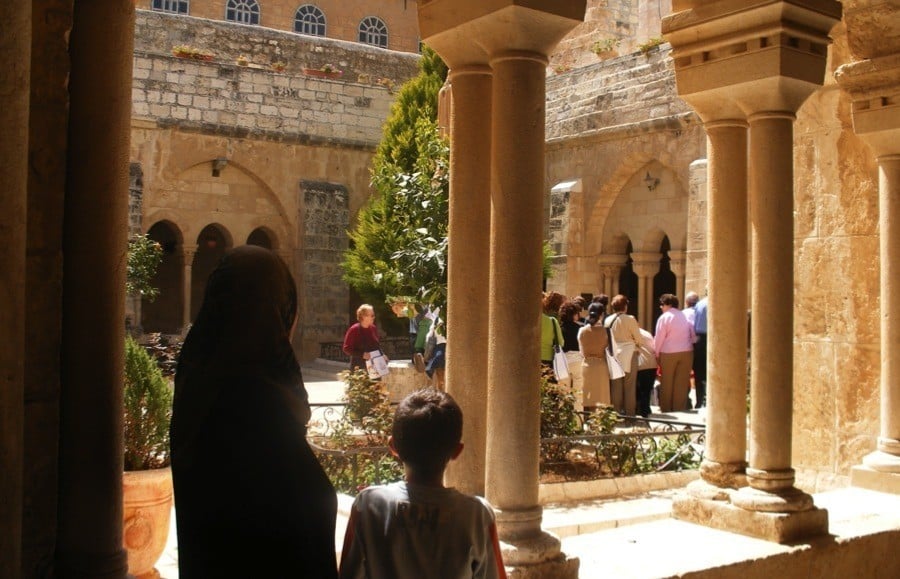 Since its inscription as a UNESCO site in 2012, the “Birthplace of Jesus” has also been on the endangered list. The site includes both the Church of the Nativity, pictured above, and the pilgrimage route leading to the storied birthplace of the founder of Christianity. Image source: Flickr 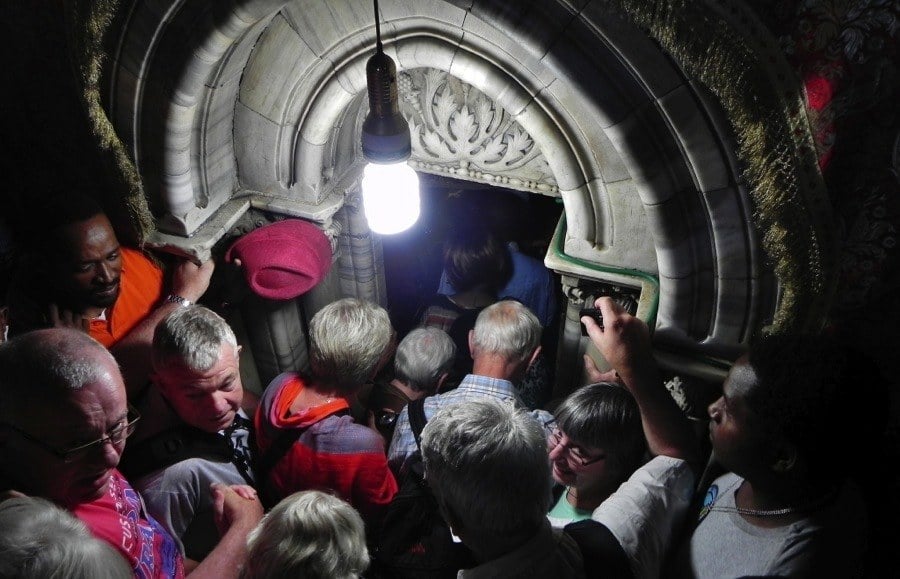 The church and its famous grotto - which believers point to as the exact location of the birth of Jesus of Nazareth - were constructed in 339. And they were not built with modern tourism in mind. As in Jerusalem, the crush of visitors is part of what has put this site under threat. Image source: Flickr

8. The Hillsides of Battir, Palestine 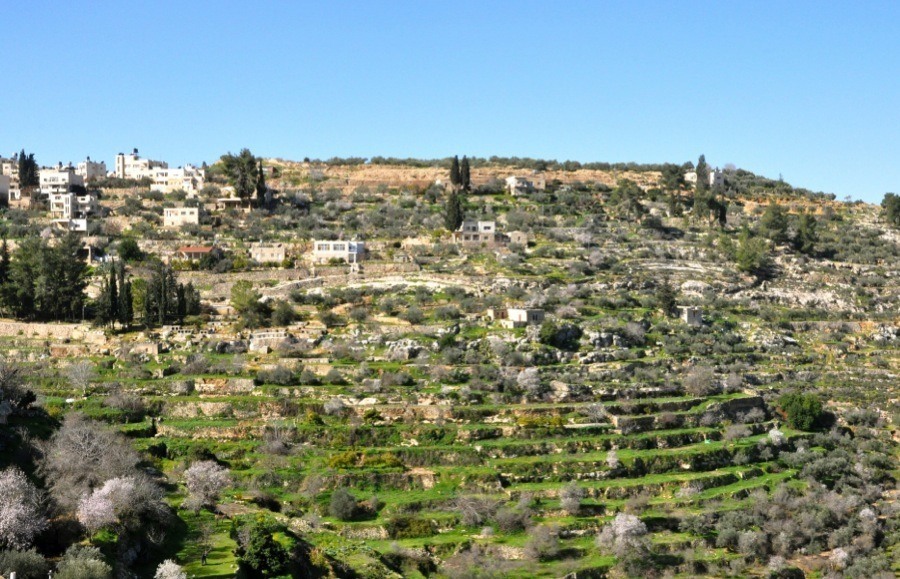 The highlands south of Jerusalem have been sculpted with stone. Here, on these terraced hillsides, Palestinians grow grapes and olives, and in 2014, UNESCO declared the area a World Heritage site and immediately designated it as an endangered site, due to building plans and the lack of an organized view of how to conserve the area. Image source: Flickr 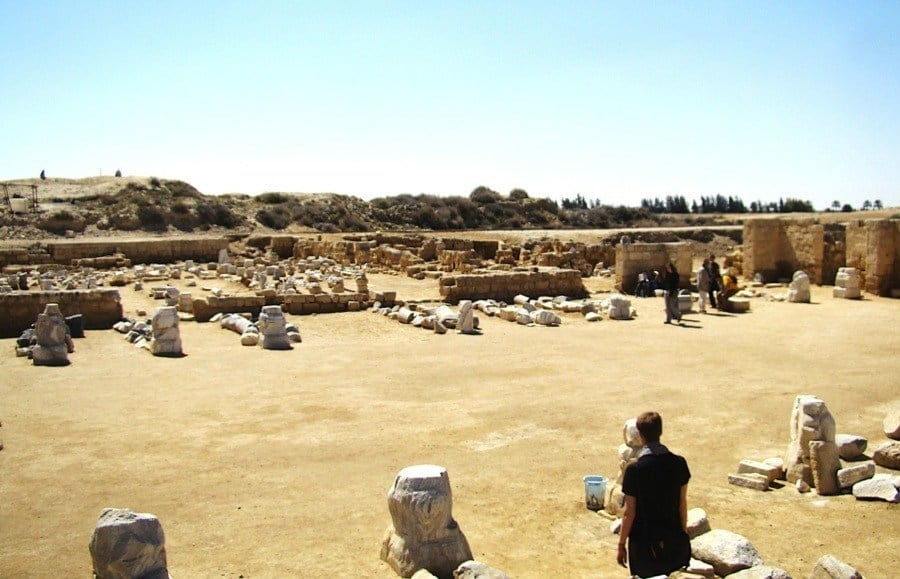 Abu Mena, a Christian holy city dating back to the 3rd century, is not threatened by terrorism or the fallout of the Arab Spring. No, it is on the endangered list due to the unexpected consequences of a World Bank land-reclamation project that has caused water levels to rise in this part of northern Egypt. The waters are seeping into the ancient crypts and building foundations, threatening their collapse. Image source: Flickr 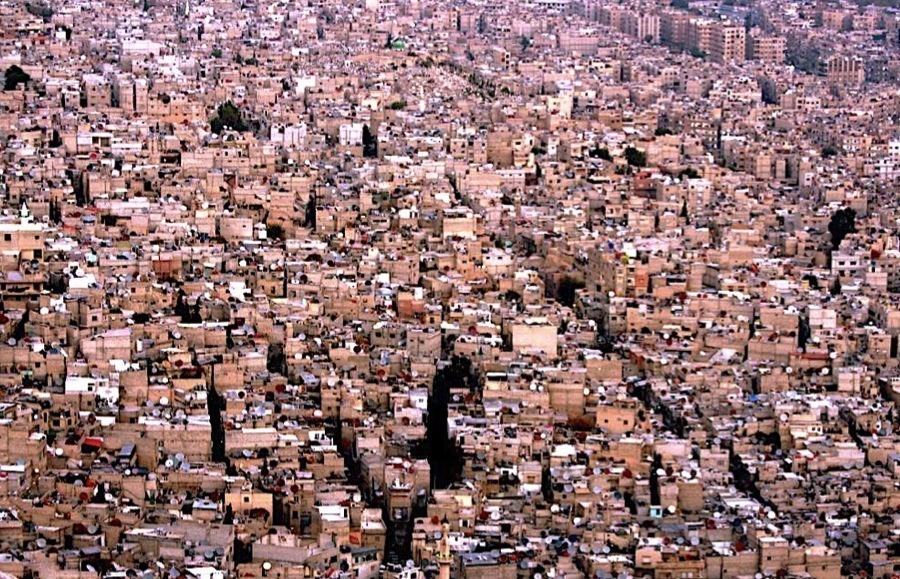 Like Aleppo, Damascus is a very old city. It was founded roughly 5,000 years ago - and sites on the outskirts date back even longer - and has been occupied ever since. Its 125 monuments display chapters of Greek, Roman, Byzantine, and Islamic history, and in 1979, UNESCO determined that this assembly of world cultures deserved World Heritage recognition. Image source: Flickr 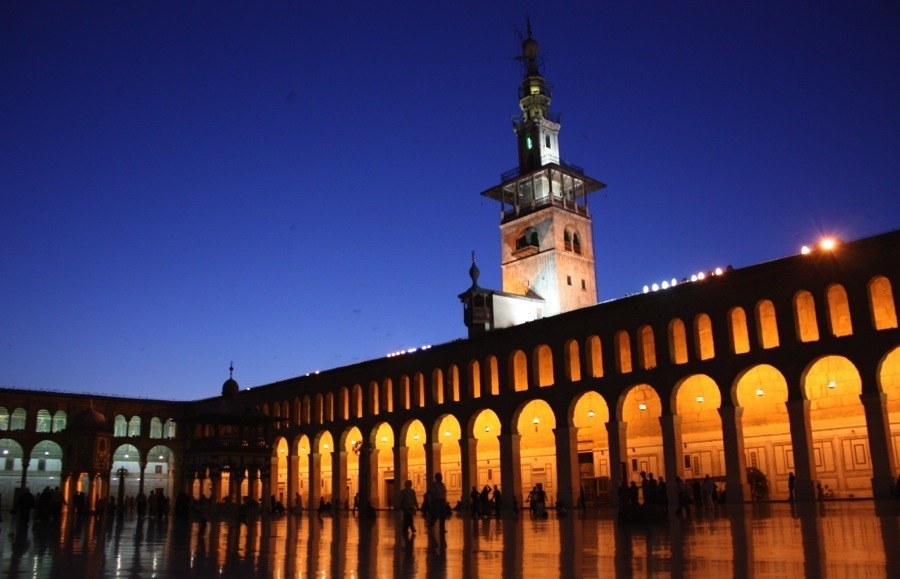 Unlike in Aleppo, Damascus’s Ummayad Mosque is still intact. While bombs have fallen on Damascus during the Syrian civil war, its major monuments have not been damaged. Image source: Flickr 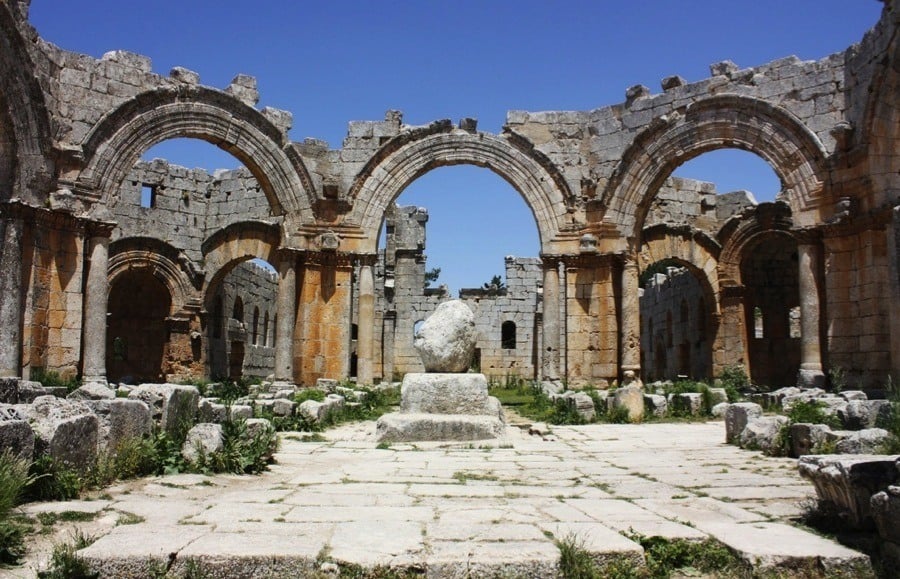 In 2011, UNESCO also designated around 40 nearby ruined villages as World Heritage sites. These villages were occupied during the Roman and Byzantine periods, but were abandoned in the 7th century as Islam became the dominant religion of the region. During the civil war, these sites - including the sanctuary of Saint Simeon, which is shown in this photo - have been looted and used as hideouts for fighters. Image source: Flicrk 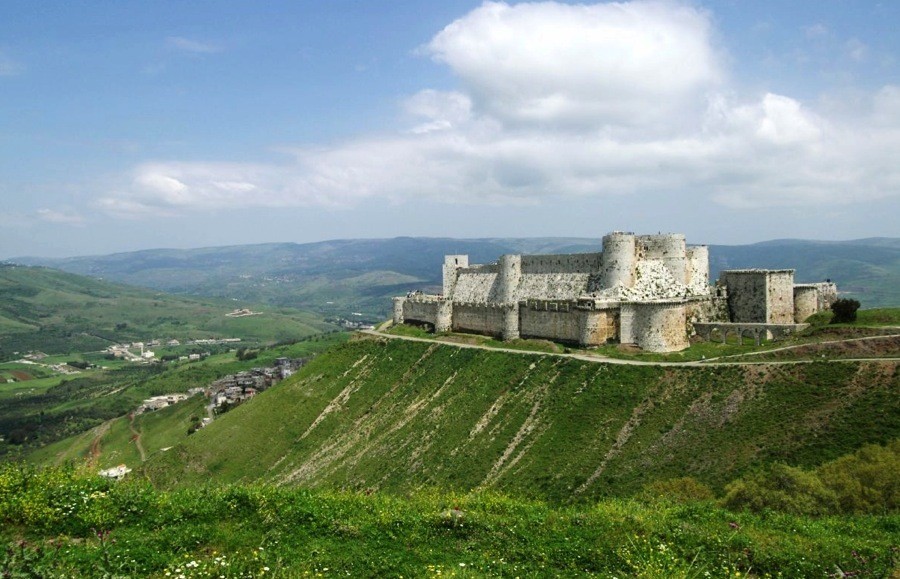 Added to the UNESCO pantheon in 2006, Crac des Chevaliers and Qal’at Salah El-Din are two castles built by European crusaders roughly a millennium ago during their Middle Eastern misadventures. During the current fighting, Crac des Chevaliers, shown here, has been the site of several clashes. Image source: Flickr 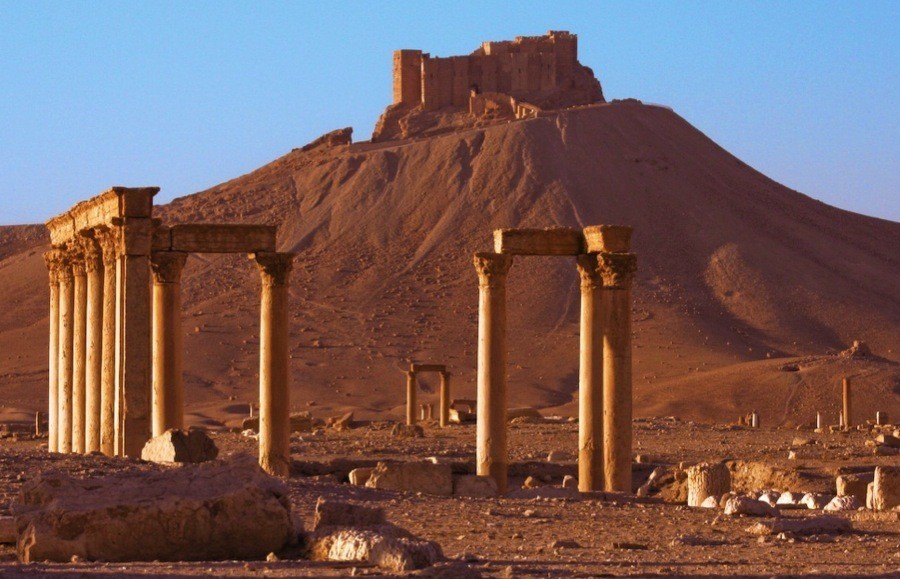 One of the major outposts in the Roman province of Syria nearly two millennia ago, the ancient city of Palmyra was a cultural and architectural touchpoint between Mediterranean and Persian cultures. Image source: Flickr 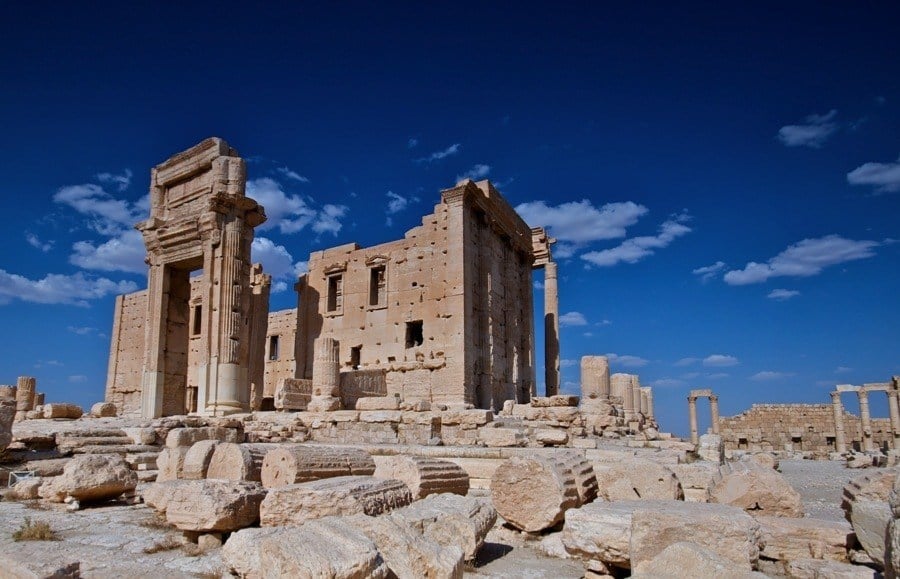 As UNESCO stated in its 1980 citation, when Palmyra became a World Heritage site, “The great temple of Ba'al is considered one of the most important religious buildings of the 1st century.” That temple is shown above, as it looked in 2009. Shamefully, in 2015, ISIS militants destroyed it. This building, which had been deemed to have “outstanding universal value,” is not only endangered. It no longer exists. Image source: Flickr 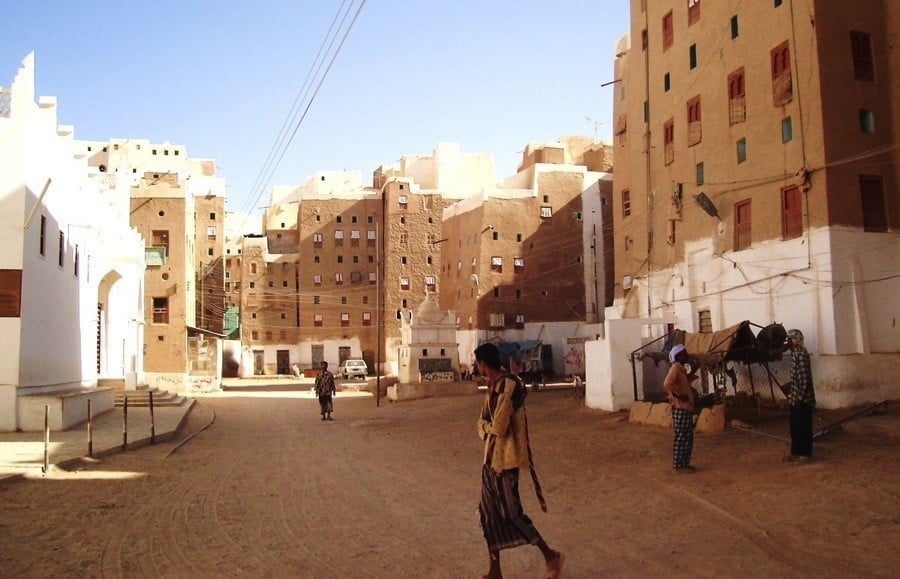 Built of sun-dried mud, the roughly 500 old buildings of Shibam stand as high as eleven stories tall and were built around 500 years ago. These elegant towers of mud have caused some to call this Yemeni city “the Manhattan of the desert.” Image source: Flickr 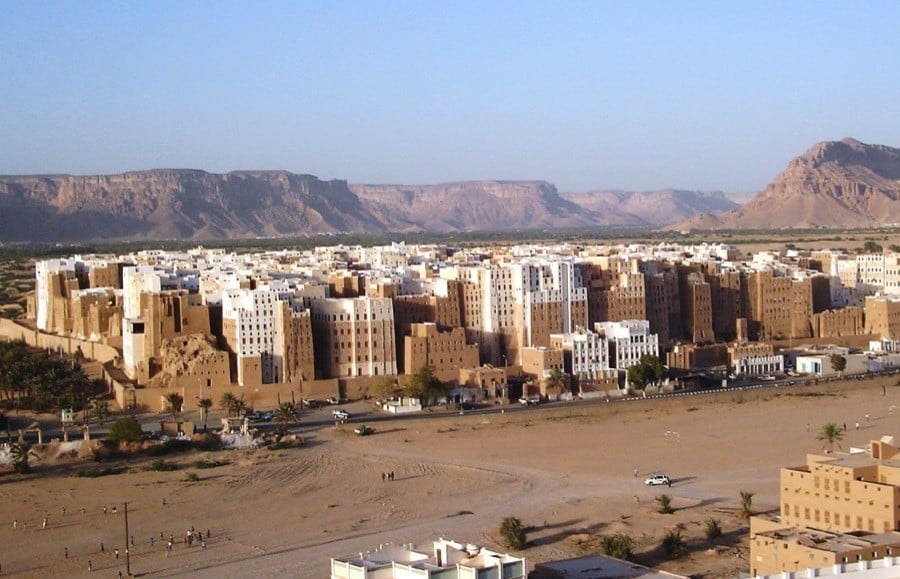 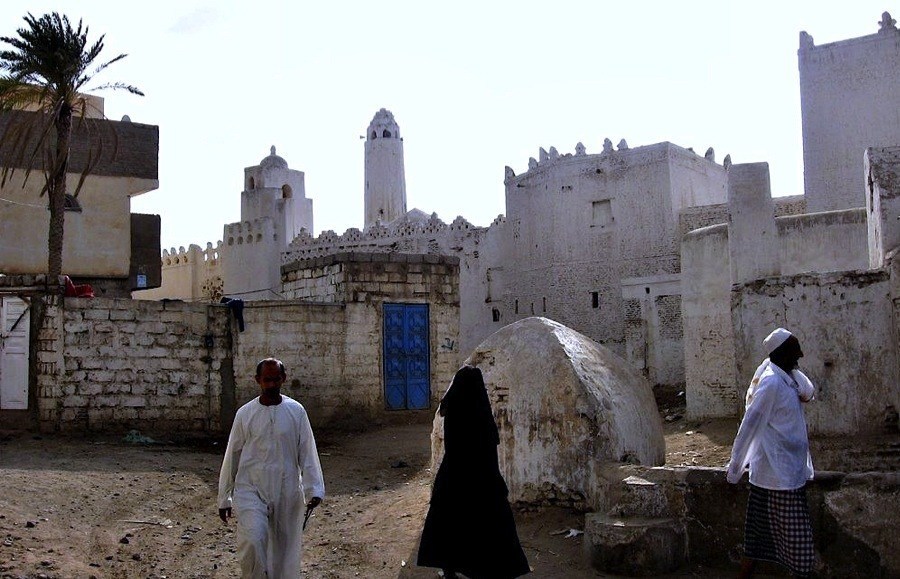 The former capital of Yemen, from the 13th to the 15th centuries, Zabid sits on the coast of the Persian gulf in the country’s southwest. It is full of remarkable, aged architecture, including 86 mosques. But the city’s economy has fallen to shambles, and due to the deterioration of the city, UNESCO put Zabid on the endangered list in 2000. Image source: Flickr 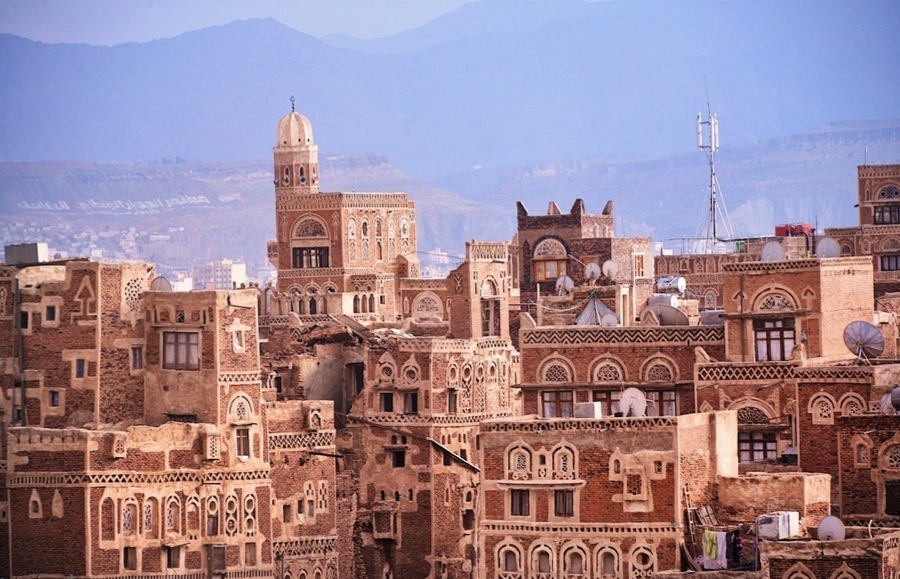 Sana’a’s 6,000 exquisite homes and its more than 100 mosques are all over 1,000 years old. These ancient, beautifully designed buildings gained Sana’a a spot on UNESCO’s World Heritage list in 1986. Image source: Flickr 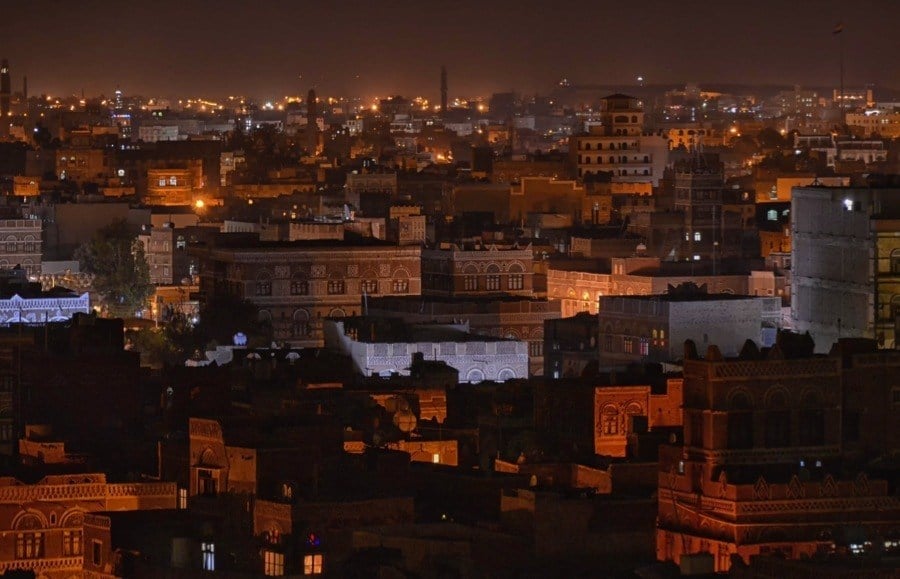 In 2015, UNESCO added Sana’a to its scorecard of endangered World Heritage sites. As UNESCO has said, “the Old City of Sana’a continues to be vulnerable owing to the deteriorating security situation in Yemen, in combination with ongoing social change, threats of inappropriate development and continuing lack of organisational support and resources for both heritage management initiatives and physical conservation.” Image source: Flickr
Remove Ads