Ever since the Phoenix Lights hovered over Arizona for three hours one night in 1997, witnesses have been left wondering whether they saw an otherworldly event or a massive hoax. 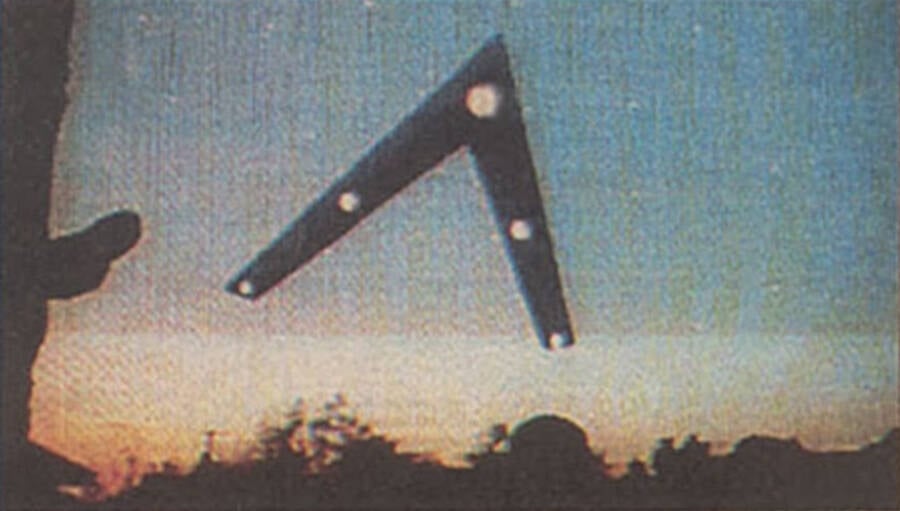 Wikimedia CommonsA recreation of the V-shaped craft seen during the Phoenix lights incident of 1997.

The sun had just set on March 13, 1997, when hundreds of people across Nevada, Arizona, and Mexico witnessed a collection of UFOs puncture the night sky. The phenomenon has become known as the Phoenix lights, and its authenticity has been hotly debated ever since.

From 7:30 until approximately 10:30 p.m., dozens of concerned citizens flooded their local police department phone lines with urgent calls for clarity. They reported floating orbs and a V-shaped craft the size of several football fields hovering above the city of Phoenix. While the glowing orbs remained stationary, the V-shaped object hovered south.

But even though pilots in the Phoenix area notified air-traffic controllers of what they were seeing, none of them saw anything out of the ordinary on their radars. Then, just as suddenly as they appeared, the Phoenix lights went out.

Government officials later claimed these orbs were nothing more than flares deployed as part of a military training exercise. The V-shaped craft was explained away as a series of planes flying in formation.

Then-Arizona governor Fife Symington initially mocked the state-wide concerns, but later revealed that he, too, had seen the enormous objects — and felt they were not of this world.

Original footage of the Phoenix lights captured in Phoenix, Arizona on March 13, 1997.

The first person to report seeing the Phoenix lights did so at about 6:55 p.m. The man, whose identity remains unconfirmed, said that he saw a “V-shaped formation” in the skies near Henderson, Nevada.

Then at about 8:15 p.m., a former police officer in Paulden, Arizona, reported seeing “a cluster of orange lights.” He followed them through the sky with his binoculars until they disappeared. These were referred to by many as “fireballs.”

Two minutes later, other calls came in about a group of white and reddish orbs hovering above Prescott, Arizona. It was now clear that there were two distinct groups of UFOs in the sky: one a collection of individual orbs and the other a V-shaped craft.

According to the National UFO Reporting Center, the V-shaped formation contained anywhere from five to seven lights that slowly soared in unison from the northwest before turning almost south. As the formation moved, one of the lights toward the back allegedly moved up to the front before falling back again.

The V-shape was famously caught on tape, and it seemed to feature had three lights on each prong and a seventh at the tip. Conservative estimates gauged it to span the length of three football fields — while others said it was more than a mile long.

A Fox 10 interview with witness Tim Ley three months after the incident.

“We don’t have anything that big,” one witness said. “It was totally silent. I’ve never seen anything even close to the colors from the exhaust that propelled that thing. It was as big as downtown Prescott and completely blocked out the stars.”

Thirty-one-year-old Dana Valentine spotted the Phoenix lights from his backyard that night. He hurriedly called his father, an aeronautics engineer, outside to see it. Together, they watched what appeared to be a V-shaped craft hover at 500 feet and pass them.

“We could see the outline of a mass behind the lights, but you couldn’t actually see the mass,” said Valentine. “It was more like a gray distortion of the night sky, wavy. I don’t know exactly what it was, but I know it’s not a technology the public has heard of before.”

“It was astonishing, and a little frightening,” said 54-year-old Tim Ley, who got out of his car to marvel at the sight. “It was so big and so strange. You couldn’t actually see the object. All you could see was the outline, as though something was blotting out the stars.” 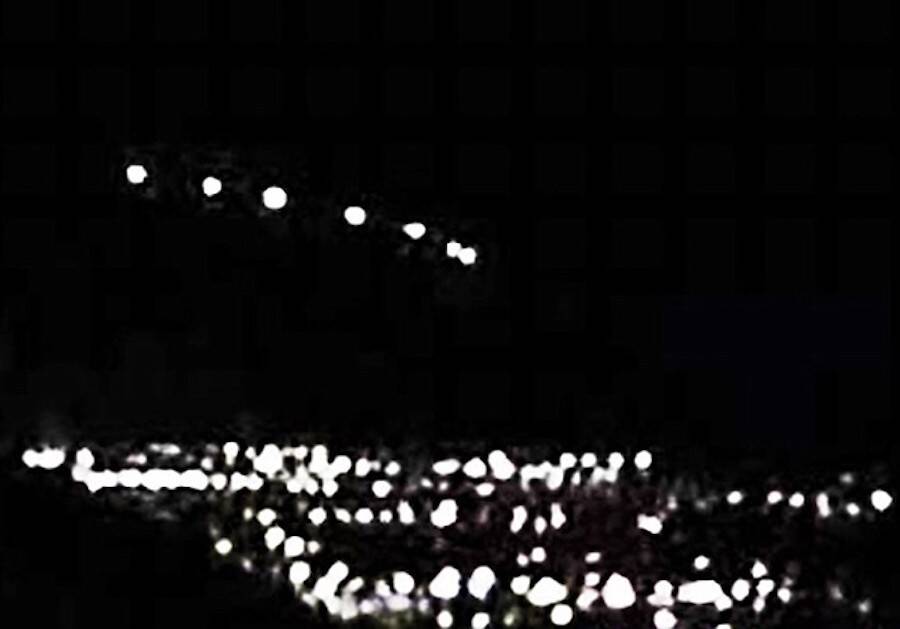 Bill Grava, who had been an air-traffic controller for 12 years and worked the Sky Harbor International Airport tower that night, called the incident “weird, inexplicable.” He reiterated years later that he still didn’t “know what to think, and I have no idea what it was.”

The Governor Sweeps The Incident Under The Rug

The local government called on the Air Force to investigate, but the U.S. Air Force said it was prohibited from doing so after Project Blue Book, which was an investigative UFO service established after the 1947 Roswell crash, shuttered in 1969.

A CNN interview with Arizona governor Fife Symington and footage of the 1997 press conference.

Citizens turned instead to independent organizations like the Mutual UFO Network, but the public outcry for an official explanation never ceased. Then-governor Symington initially claimed he hadn’t even heard of the incident, but finally scheduled a press conference for June 19, 1997, to address it.

To the relief of reporters and the distress of witnesses, Symington claimed the government had captured an alien — and brought his costumed, handcuffed chief of staff, Jay Heiler, on stage. “This just goes to show that you guys are entirely too serious,” said Symington.

The stunt was met with laughter and applause, and the entire incident was swept away as a harmless oddity. In 2007, however, none other than Symington himself revealed in numerous interviews that he too felt the UFOs were real and startling. 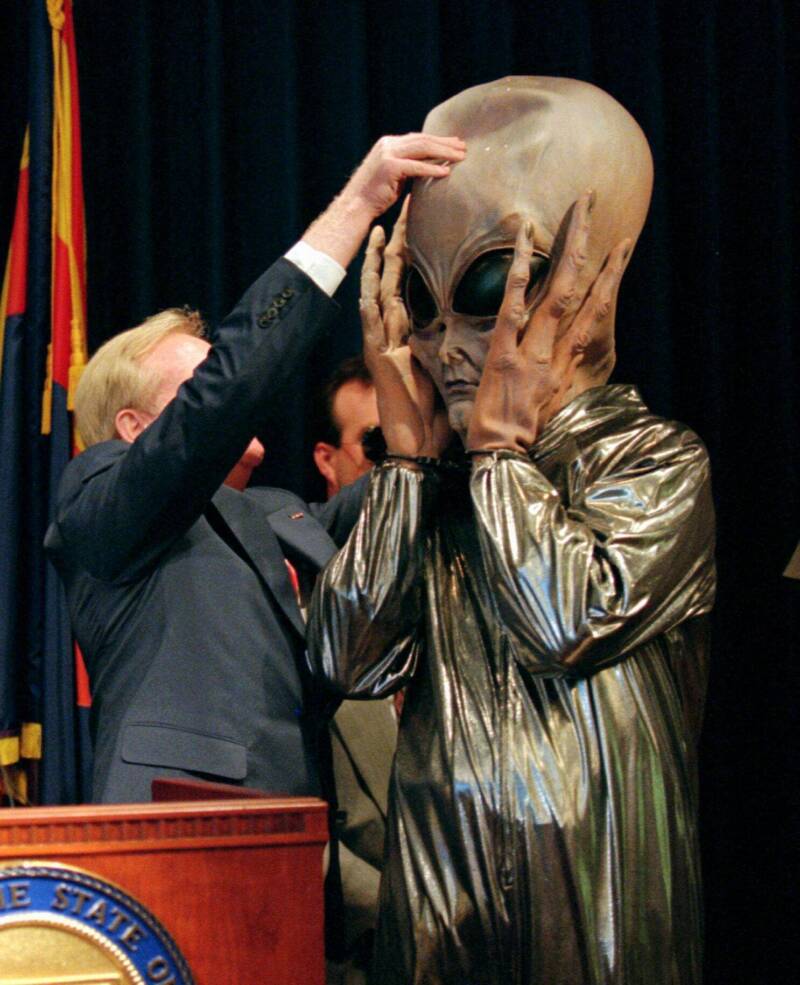 He rationalized his dismissive press conference by claiming that he hoped to assuage his constituents, who were “on the brink of hysteria.” For 10 years, he had quietly shared the concerns of the people he mocked as conspiracy theorists.

“I’m a pilot, and I know just about every machine that flies,” he said. “It was bigger than anything that I’ve ever seen. It remains a great mystery. Other people saw it, responsible people. I don’t know why people would ridicule it… [it was] enormous. It just felt otherworldly.”

He added: “In your gut, you could just tell it was otherworldly.”

Were The Phoenix Lights A Hoax?

Unfortunately, Symington’s press conference had made the Phoenix lights a point of ridicule to many. Consequently, respectable witnesses like Phoenix physicians Dr. Brad Evans and Dr. Lynne Kitei bit their tongues.

“Some people saw these things take off at great speed without even dispersing the air,” said Kitei. “So many people are afraid to come forward because they are so ostracized.”

“Other folks, I think, like us, repressed it,” said Evans. “There was nothing to share. We didn’t talk to anybody for months.”

Local news reflecting on the Phoenix lights of 1997 with input from Dr. Lynne Kitei.

In recent years, skeptics like former Air Force pilot James McGaha have reported their own Earthly explanations for the event. He said the V-shaped craft was likely a group of A-10 airplanes flying in formation, with flares creating the disparate orbs or “fireballs” some reported.

Many, including Symington, denounced that explanation. Indeed, the government’s recent disclosure of UFO-related intel has emboldened many to believe it could have been otherworldly.

Ultimately, the Phoenix lights of 1997 irrevocably changed countless lives, regardless of an official explanation. Bill Greiner, for instance, was a 51-year-old cement truck driver when he spotted them.

“I’ll never be the same,” he said. “Before this, if anybody told me they saw a UFO, I would’ve said, ‘Yeah, and I believe in the tooth fairy.’ Now I’ve got a whole new view. I may just be a dumb truck driver, but I’ve seen something that doesn’t belong here.”

After learning about the Phoenix lights of 1997, read about the nine most convincing alien abduction stories in modern history. Then, learn the eerie story of the Rendlesham Forest UFO incident.