Dealing With Grief: Japanese Phone Booth Connects The Living And The Dead

Called "the phone of the wind," this device allows Japanese mourners to leave messages for those who died in the 2011 earthquake. 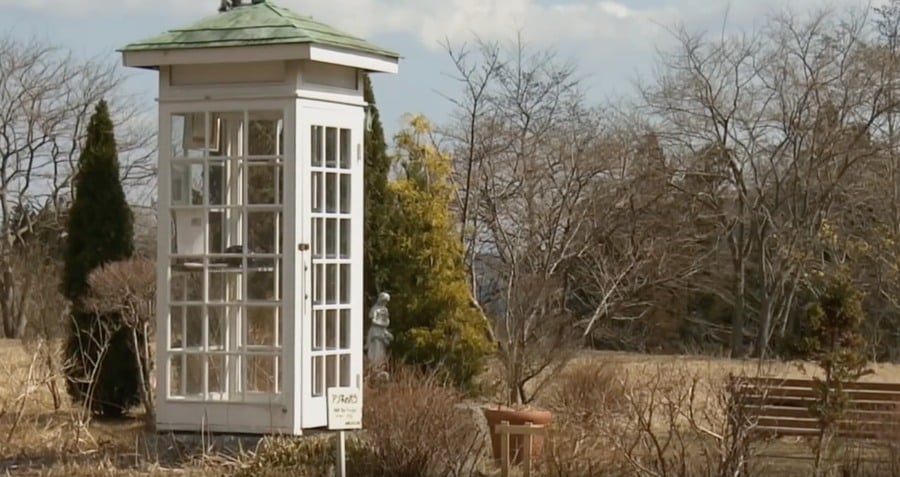 In 2011, a 9.0-magnitude earthquake tore through northeastern Japan and triggered a devastating tsunami. Together, the events destroyed the country, causing more than $300 billion in damages and resulting in the loss of more than 15,000 residents. Some survivors are still grieving over the loss of their loved ones, and one coastal town has come up with a unique way of coping.

Positioned atop a grassy hill overlooking the Pacific Ocean, a phone booth in Otsuchi, Japan allows living people to call their dead relatives and loved ones. Called the “phone of the wind,” the disconnected rotary phone positioned inside a glass booth allows callers to send verbal messages to those they’ve lost, which the wind then carries away. 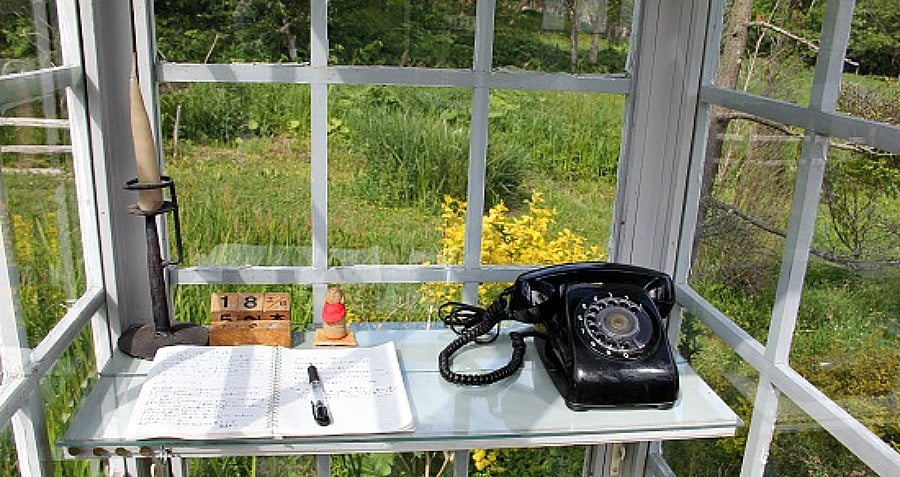 Otsuchi resident Itaru Sasaki is behind the phone booth. Sasaki lost his cousin in 2010, one year before the tsunami devastated the small town. At first, only Sasaki used the phone, in an effort to stay connected with his cousin in a time of deep grieving.

“Because my thoughts couldn’t be relayed over a regular phone line,” said Sasaki, on an episode of This American Life. “I wanted them to be carried on the wind.”

After the 2011 earthquake and tsunami, which claimed the lives of more than 800 Otsuchi residents, the phone booth became a popular destination for residents and travelers from afar and has since welcomed more than 10,000 visitors in its nearly six years standing. 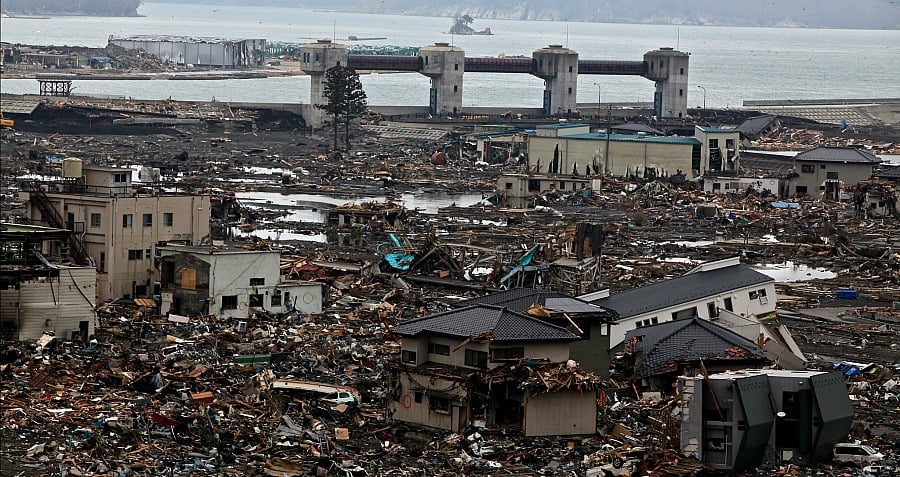 In a documentary created by Japan’s national public broadcasting network, NHK, called Phone of the Wind: Whispers to Lost Families, viewers can take a look into lives of the grieving people who find catharsis in this phone booth.

Some enter in search of answers, others to express their longing. Many call just to check in, assuring their loved ones that they and those left behind are doing well. An elderly woman brings her grandsons to the booth to phone their departed grandfather after school, and others arrive with a group of friends, supporting one another in their moment of need.

“I can’t hear him, it’s just me talking, but he heard me, so I can keep living,” said one Otsuchi resident, who uses the phone to call her departed son, who perished in a fire. 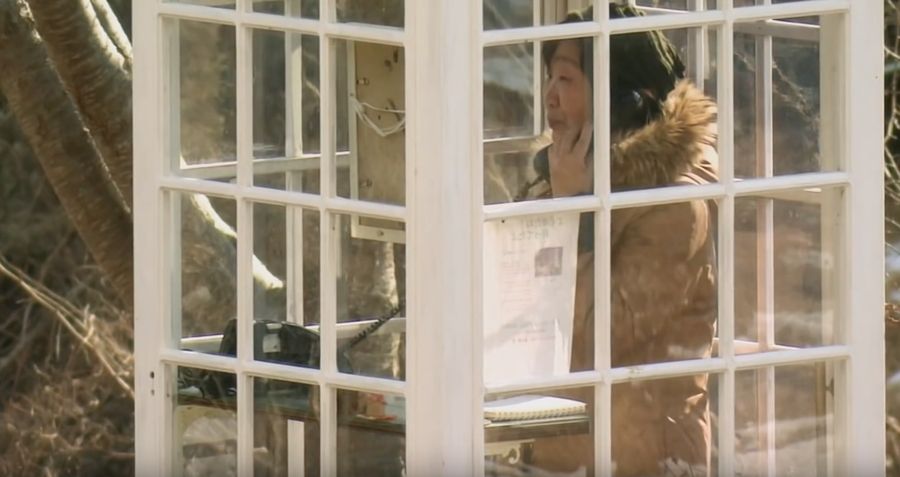 In addition to the 800 lives lost in Otsuchi, more than 400 remain missing to this day, prompting some to voice their concerns to family members whom they believe are still out there somewhere. Hoping that their message may somehow be heard, they trek to the booth and state their message before returning home for the day, often returning to the phone time and again.

While expressing your feelings into a disconnected phone in the middle of nowhere may seem odd to some, studies have shown that proper outlets for grief can not only speed up the grieving process but also create space for acceptance.

A recent study published in Psychological Science tested “partner oriented self-regulation” in an effort to understand how “holding in,” or not expressing, one’s grief might affect their partner.

Of the 219 couples studied, all of whom had suffered the loss of a young child, results suggested that the more one attempted to hold in the feelings associated with grief, the more both they and their partners would experience an even more profound impact of such feelings. To put it simply, in order to heal, you have to let it out. 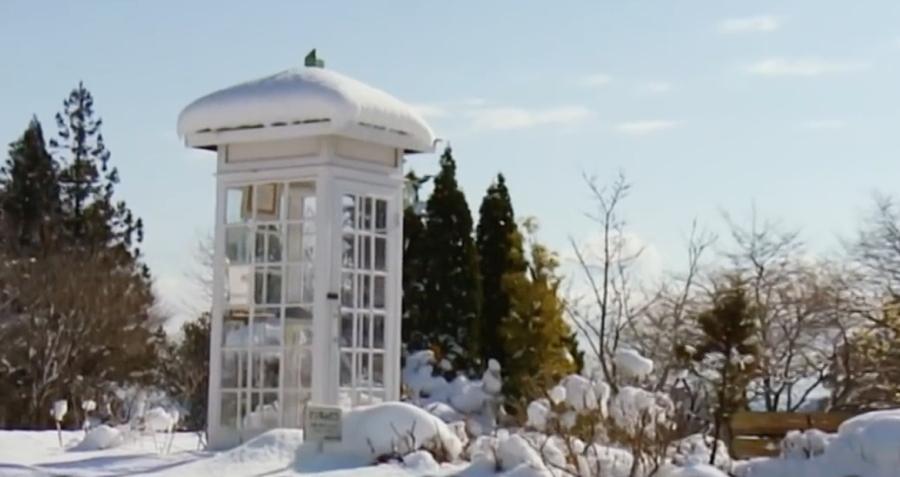 Anyone who has suffered a loss can probably relate to the simple desire to speak, just once more, to departed loved ones. While the phone of the wind can’t possibly allow for a reciprocal conversation, the mere sense of connectedness is enough for many to retain a sense of peace following their loss, in addition to providing a healthy outlook on the grieving process.

As Sasaki says, “No matter how hard it is, hope makes life worth living.”