The Living Dead: How The Toraja People Of Indonesia Honor Their Deceased

Indonesia's Toraja people keep their dead relatives in their homes, treating them as if they were alive until they can be given expensive, elaborate funerals. 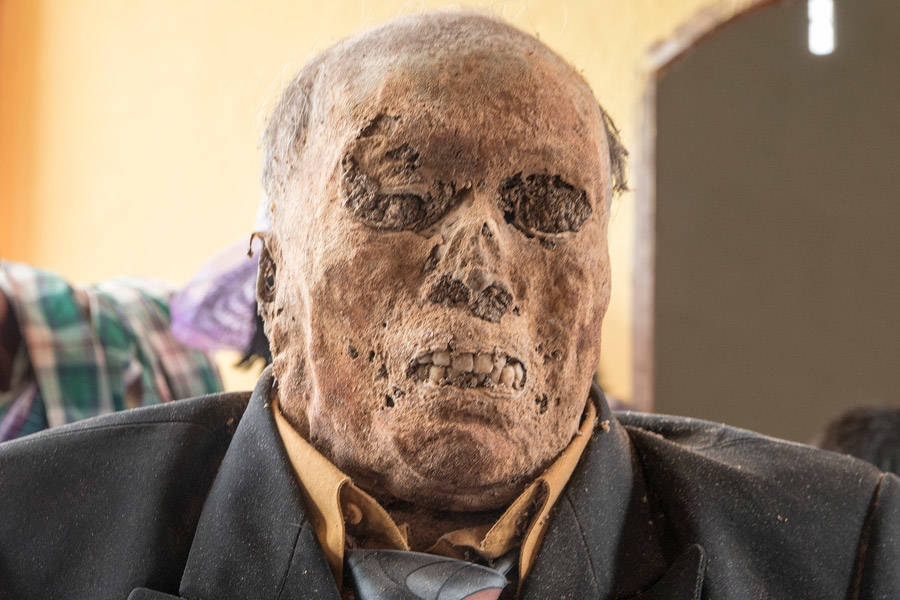 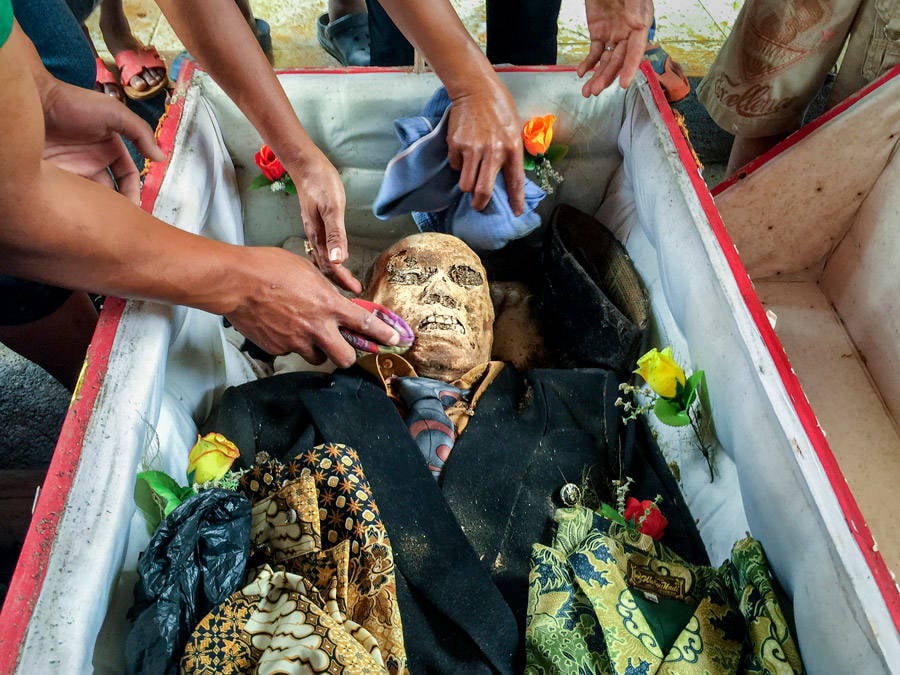 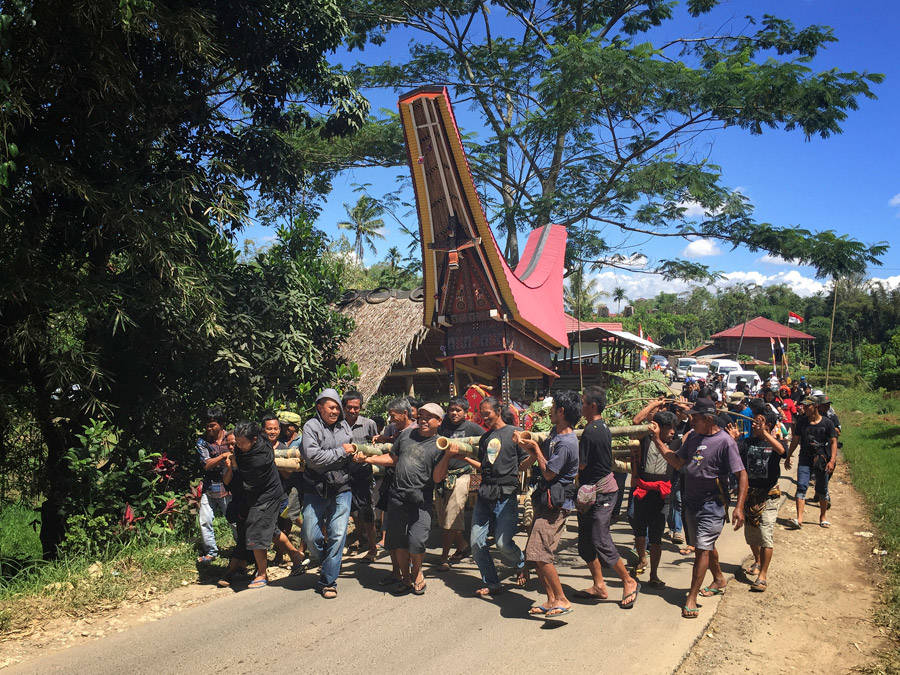 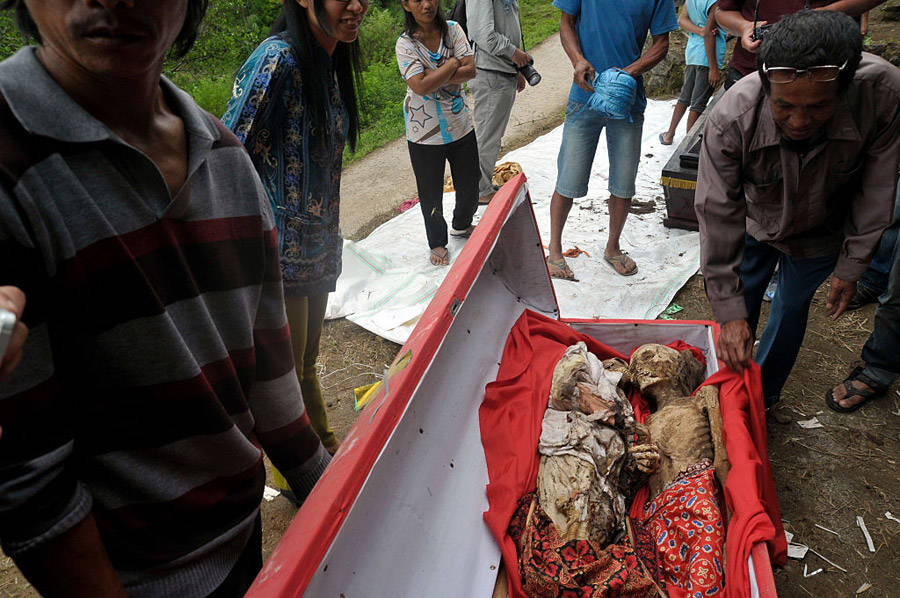 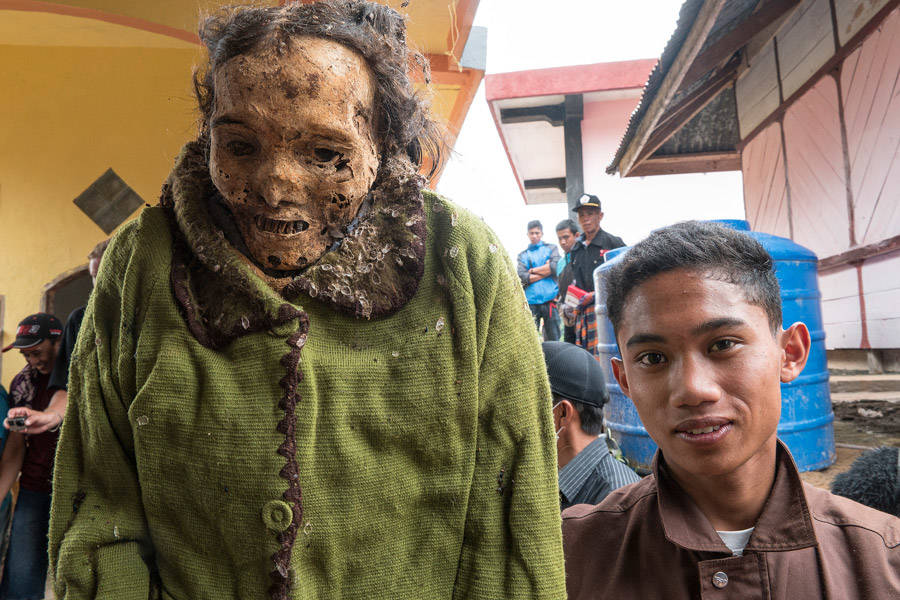 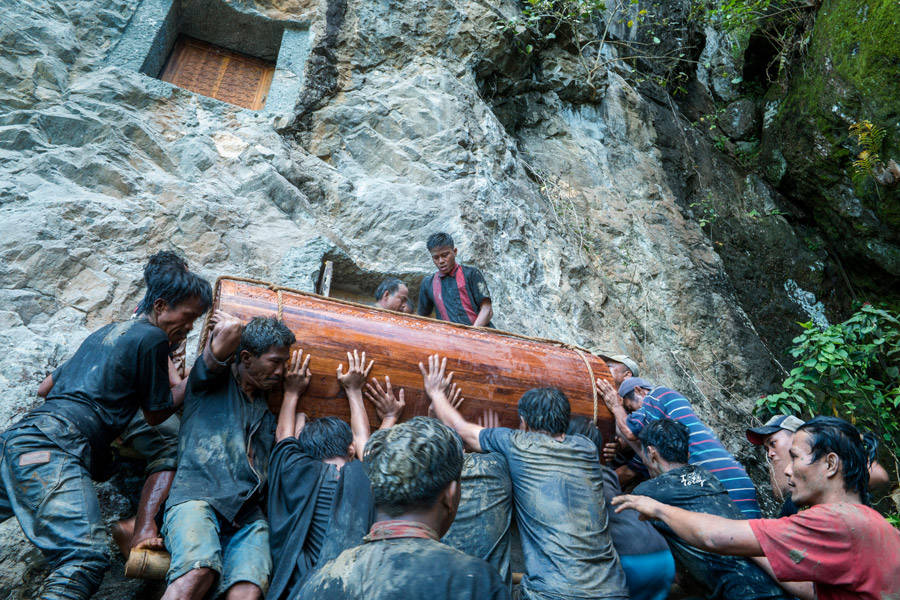 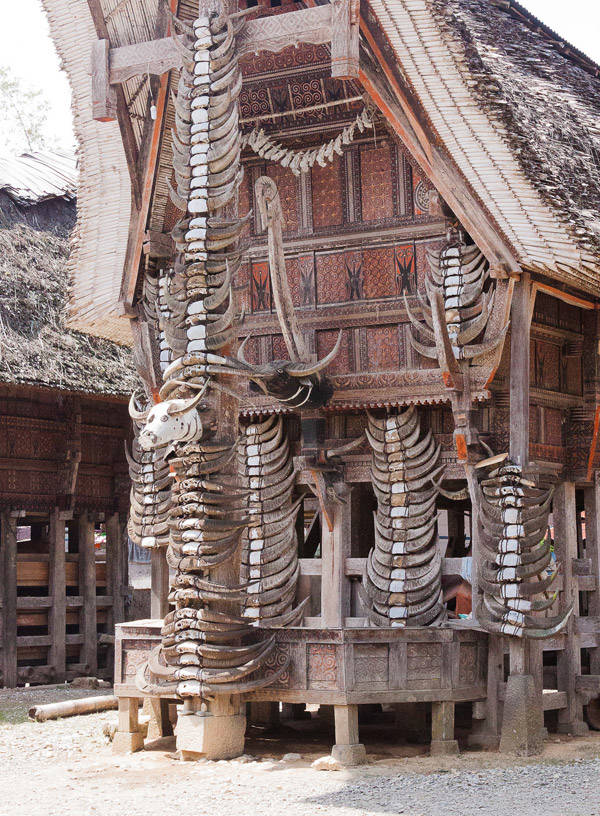 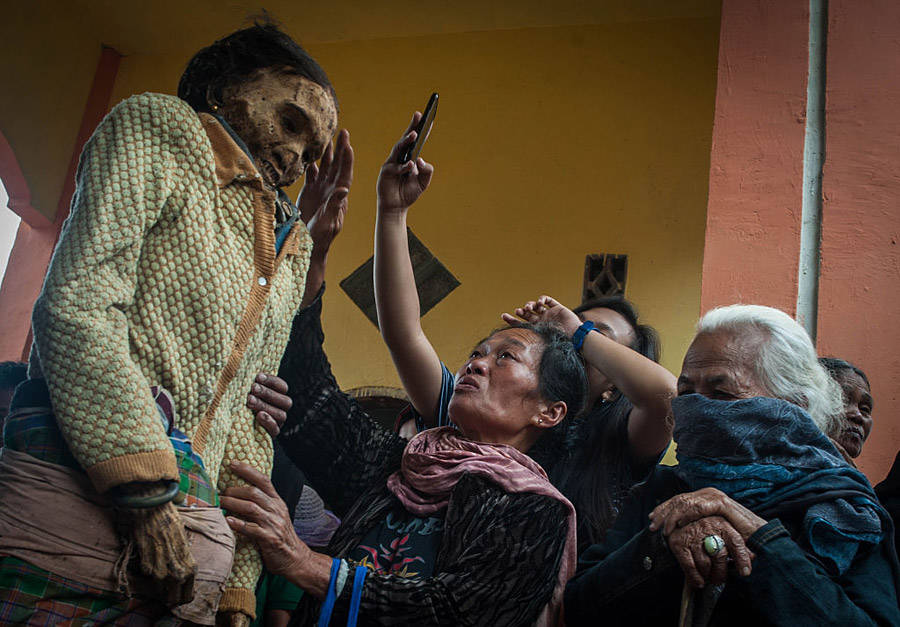 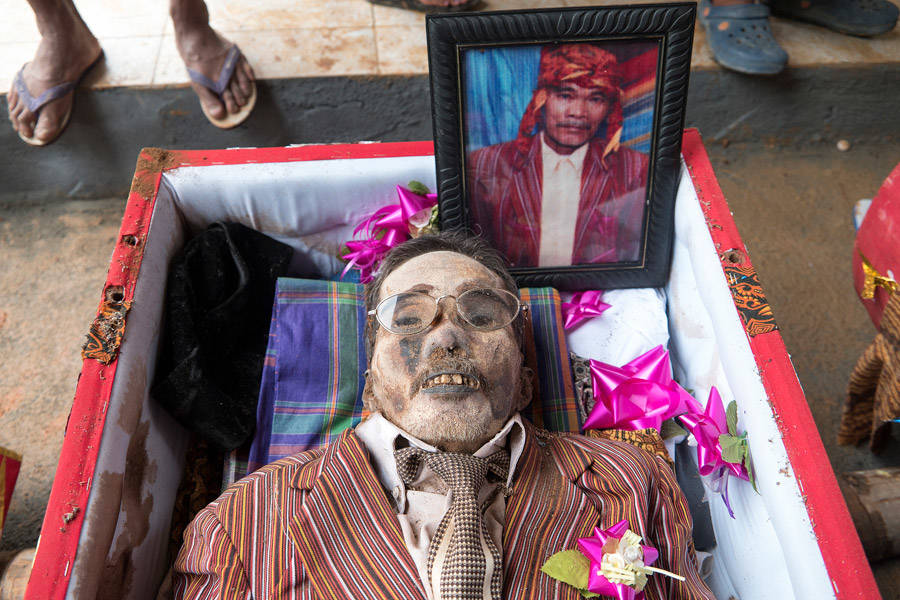 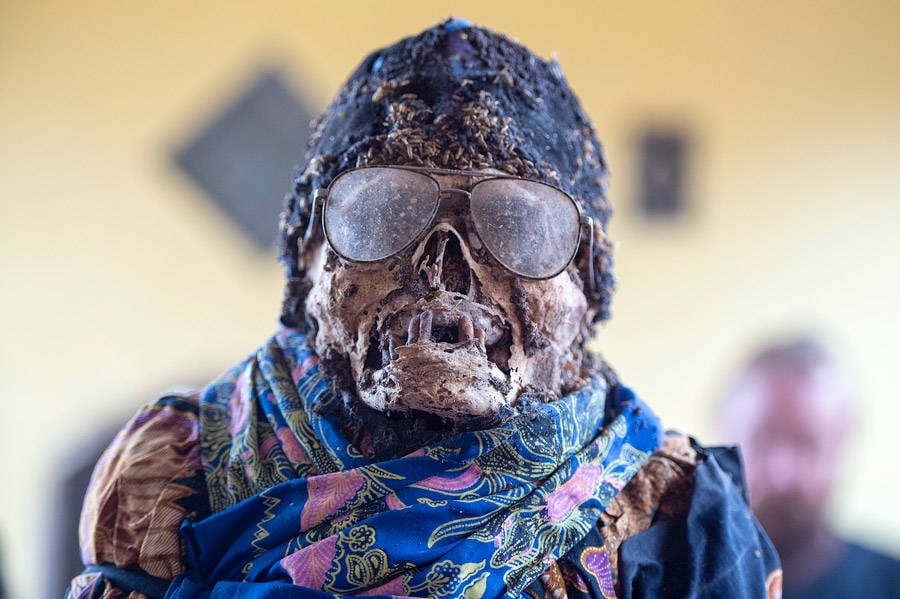 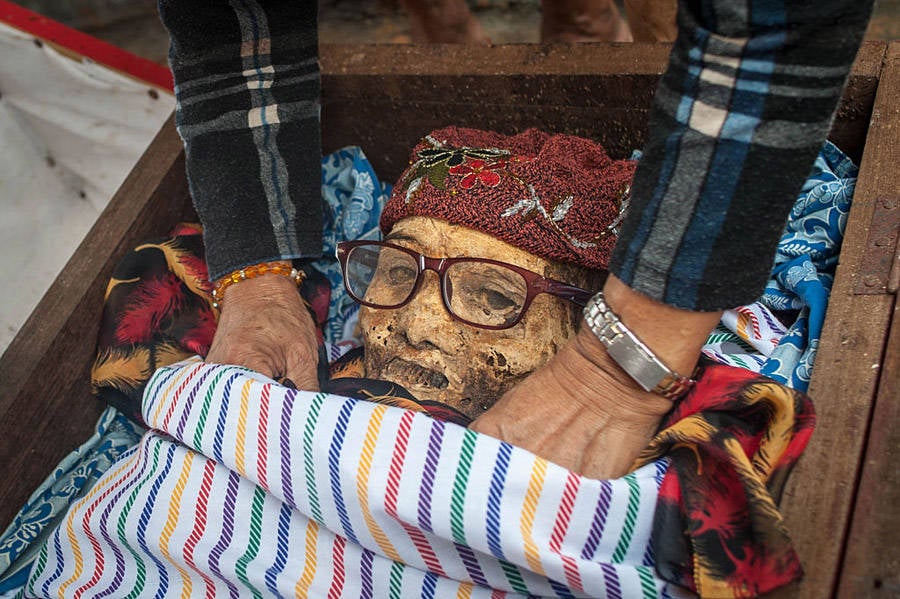 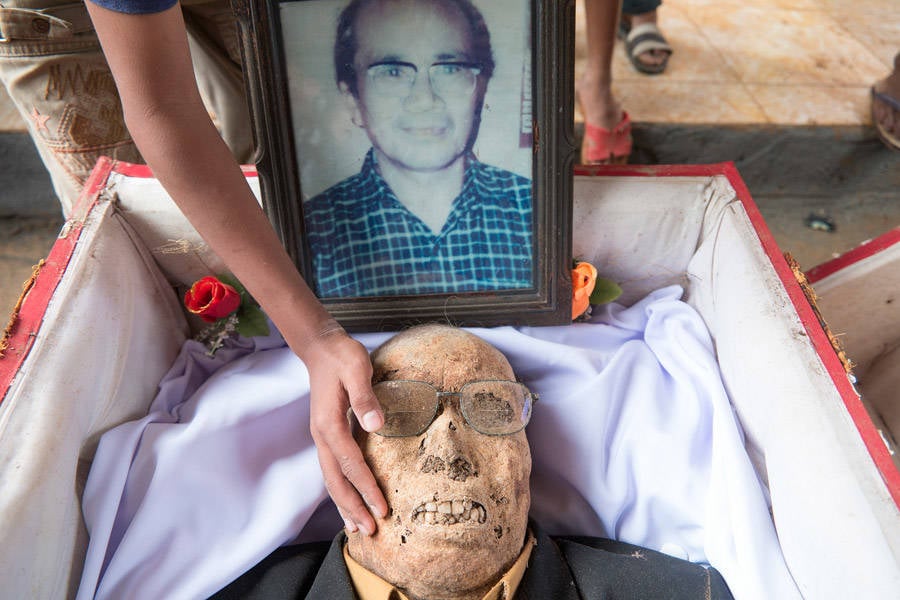 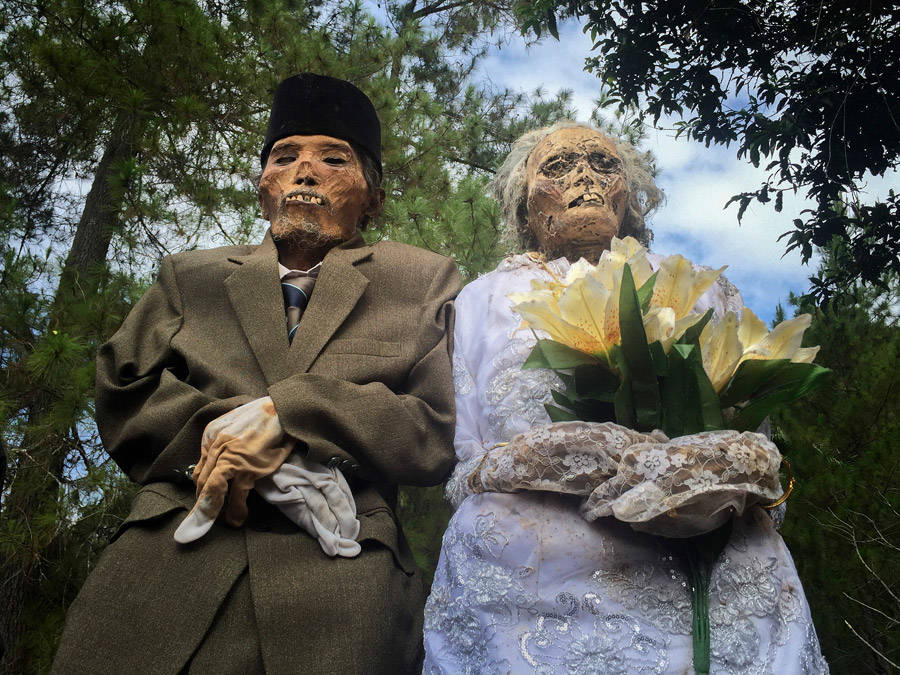 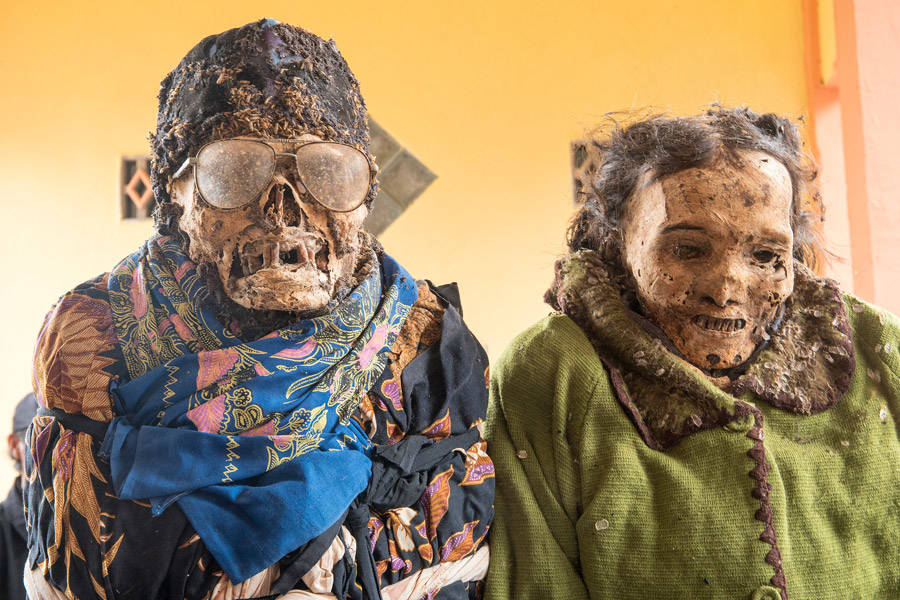 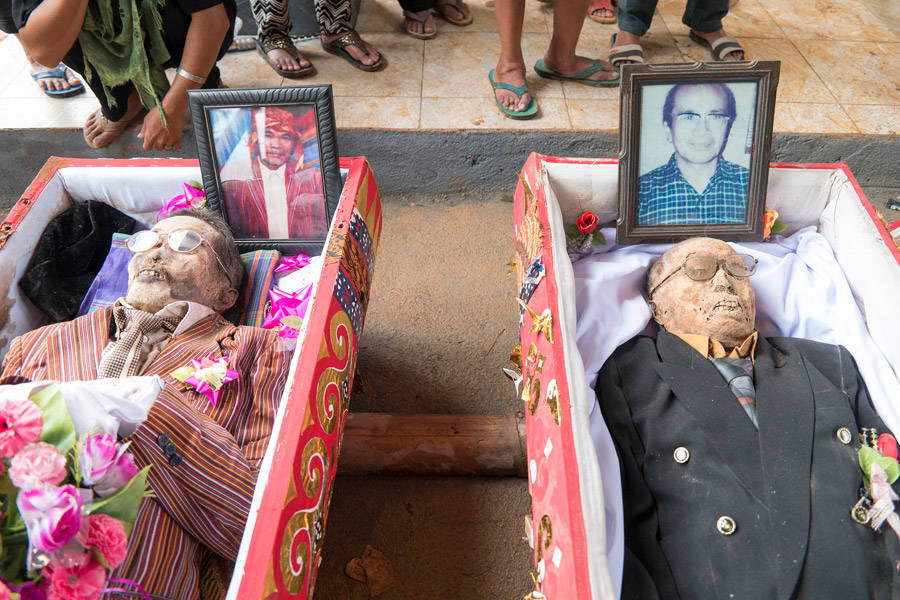 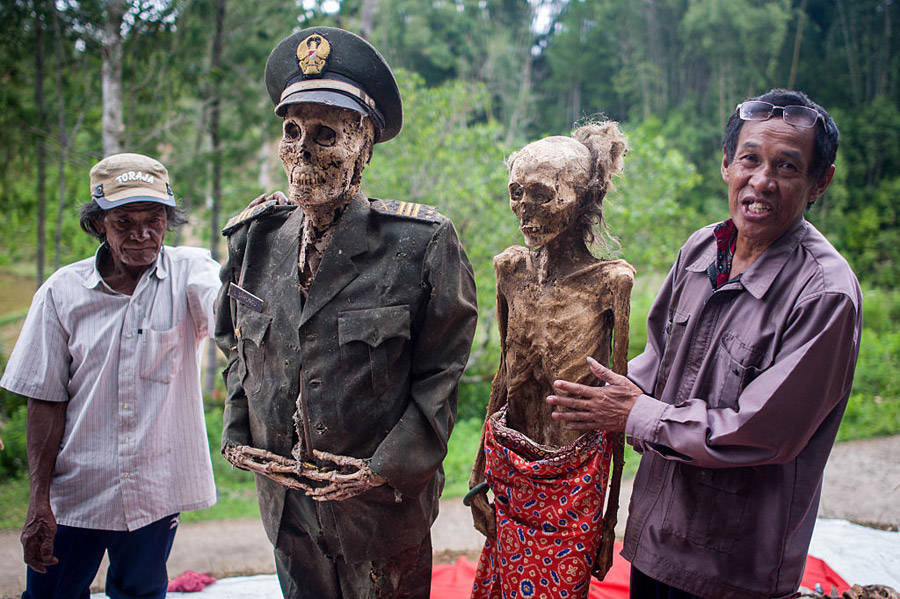 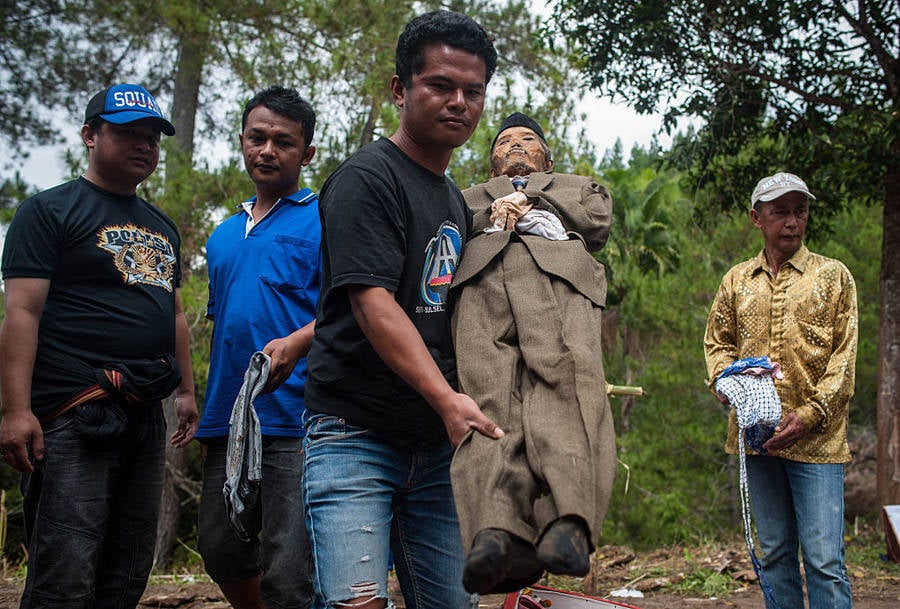 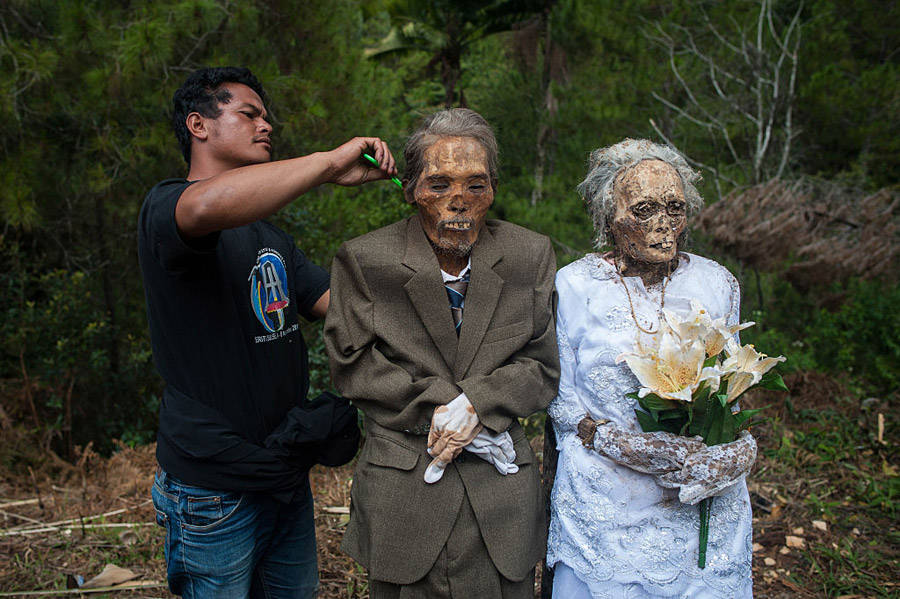 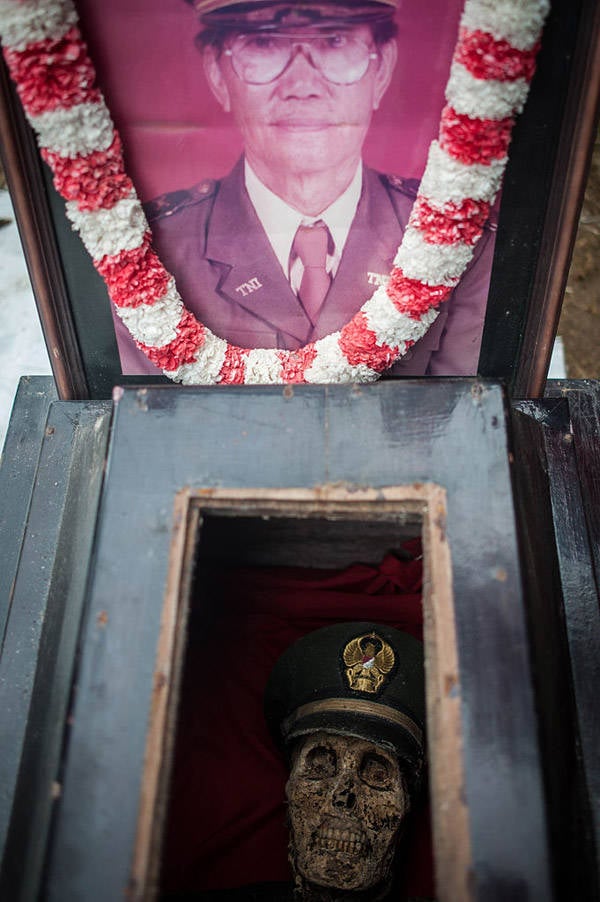 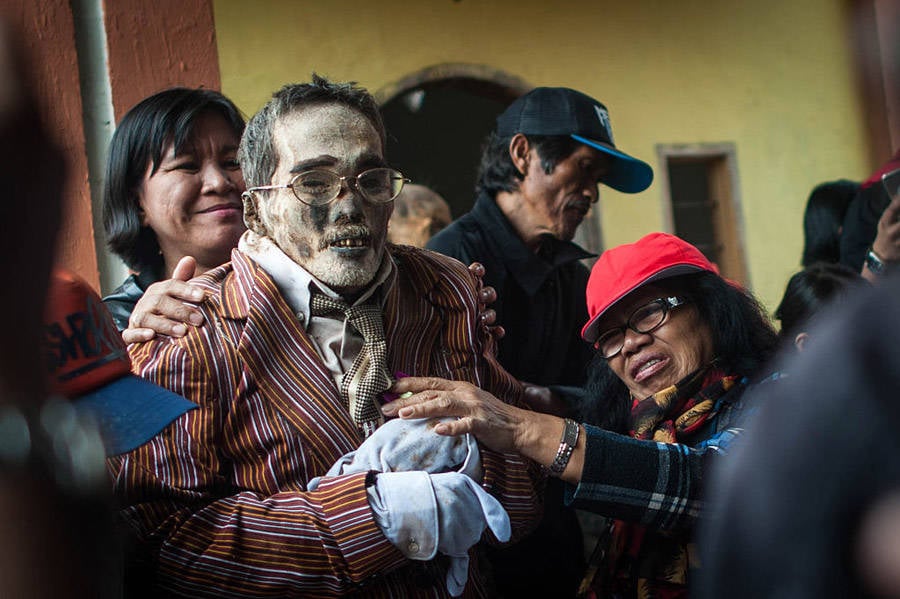 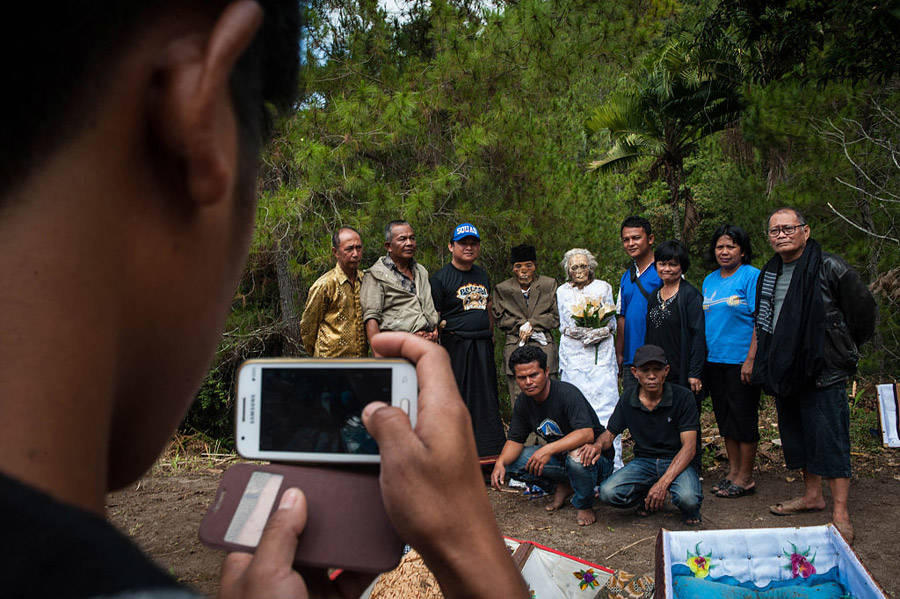 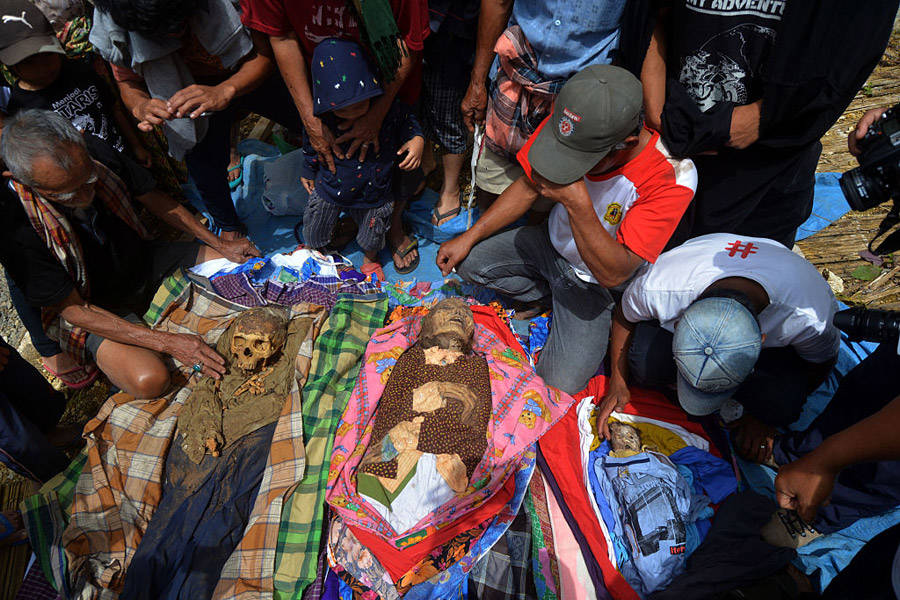 Aug. 25, 2016.Jefta Images/Barcroft Images/Getty Images
5 of 23
A young Torajan man poses for a photo with one of his mummified ancestors. Muslianshahmasrie/Flickr
6 of 23
Many Torajans are buried in tombs dug into the sides of cliffs. Here, a coffin is brought down from its tomb so that the dead relative can be cleaned and groomed. Muslianshahmasrie/Flickr
7 of 23
The more buffalo horns a family has on the front of a house, the greater their status is in the community.

Bagan Pangala Village. September 2012. Bertrand Duperrin/Flickr
8 of 23
Relatives clean the body and snap photos with their deceased ancestor during the Ma'nene funeral ritual.

Panggala Village. August 2016. Sijori Images/Barcroft Images/Getty Images
9 of 23
A dead Torajan lies in his casket with a photo of him in when he was alive placed beside his head. Muslianshahmasrie/Flickr
10 of 23
Many Torajan corpses aren't just cleaned and given new clothes, but will be offered food, cigarettes, and drink by their loved ones. Muslianshahmasrie/Flickr
11 of 23
Relatives clean the body of Ne'Tampo, who had been dead for 30 years, when this photo was taken in 2016 during the Ma'nene ritual at Panggala Village in Indonesia. Sijori Images/Barcroft Images/Getty Images
12 of 23
A man touches the face of one of his dead relatives who has been exhumed from his crypt. Muslianshahmasrie/Flickr
13 of 23
The bodies of Jesaya Tandibua' (left) and Yakolina Namanda stand together after being cleaned and groomed by their relatives.

August 2016. Muslianshahmasrie/Flickr
14 of 23
Two Torajan mummies stand together after being exhumed by their relatives for a celebration of the impact they've had on the living. Muslianshahmasrie/Flickr
15 of 23
Two bodies like side by side with their portraits during the Ma'nene ritual in Indonesia. Muslianshahmasrie/Flickr
16 of 23
Relatives pose with the bodies of Ne'TLimbong (right) and L Sarungu (left) during the Ma'nene ritual in Panggala Village. L Sarungu was an army veteran who had been dead for 10 years when this photo was taken in August 2016.Sijori Images/Barcroft Images/Getty Images
17 of 23
Herman Tandi, 32, exhumes the body of his grandfather Jesaya Tandibua during the Ma'nene ritual.Sijori Images/Barcroft Images/Getty Images
18 of 23
Herman Tandi carefully grooms his grandparents Jesaya Tandibua' (left) and Yakolina Namanda for a family photo. Sijori Images/Barcroft Images/Getty Images
19 of 23
The body of L Sarungu, an army veteran who died a decade earlier, is exhumed for the Ma'nene corpse-cleaning ritual in August 2016.Sijori Images/Barcroft Images/Getty Images
20 of 23
Paul Sampe Lumba has been dead for seven years and has his body and clothes meticulously cleaned by relatives.

Toraja, Indonesia. Aug. 26, 2016.Sijori Images/Barcroft Images/Getty Images
21 of 23
A man snaps a family photo as relatives pose with the bodies of their deceased loved during the Ma'nene ritual. The Living Dead: How The Toraja People Of Indonesia Honor Their Deceased
View Gallery

While death is typically treated with a joyless outlook in Western culture, the complete opposite is true for Indonesia's Toraja people.

For them, death is not something to dread and avoid, but a central part of living that involves honoring the deceased with the utmost care to aid their passage into the afterlife.

Funerals are major celebrations that take years of preparation. In the meantime, the dead bodies remain in their family homes. Their loved ones change their clothes, give them food and water daily, and swat the flies off their rotting skin.

Let's take a closer look at this fascinating ritual.

Who Are The Toraja?

The Toraja people number in the hundreds of thousands, and are indigenous to the South Sulawesi region of Indonesia, at the geographical center of the country's sprawling archipelago. The area is mountainous and tropical, experiencing high temperatures and heavy rainfall nearly every day.

Torajans had little contact with the outside world until the Dutch started occupying their territory in 1906. 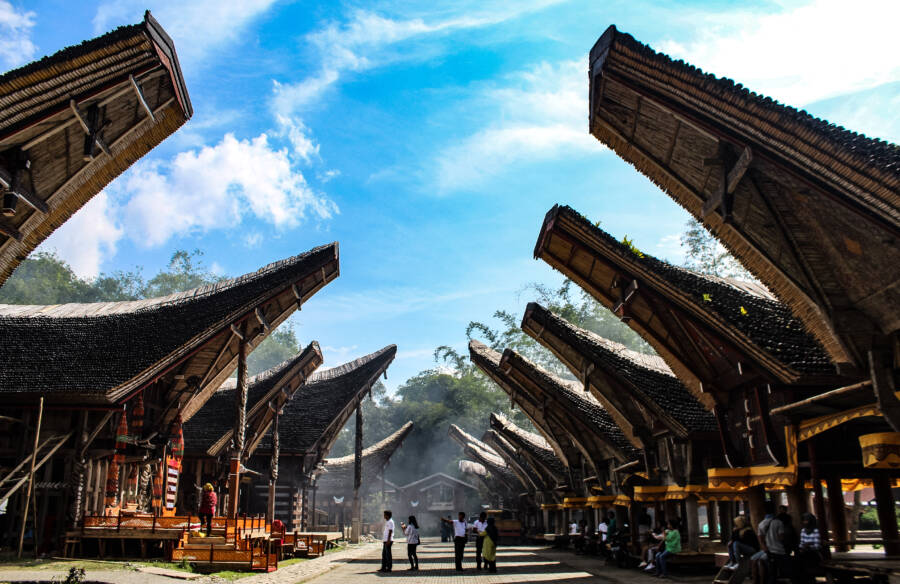 While most of the modern-day Toraja people are of Christian faith and some are Muslim, animism — a belief that non-human entities, such as animals, plants, and even inanimate objects possess a spiritual essence — is still very much a part of their culture.

More importantly, Torajans hold onto the belief that their earliest ancestors were heavenly beings who descended to Earth using a divine stairway.

Most Torajans live in small villages connected only by dirt roads in the Sulawesi highlands. The villages are known for their distinct houses known as tongkonan. The buildings sit high on stilts with sweeping saddleback roofs and ornate carvings.

These houses function as the meeting point for nearly all aspects of Torajan life, which is highlighted by the importance of family connections. From governmental affairs to weddings and religious ceremonies, the tongkonan is the focal point of tradition in Toraja culture.

What truly sets Torajans apart, however, is their unique treatment of the dead.

Living Among The Dead

It wouldn't be an overstatement to say that death is the central concern for the Toraja people and that funerals take precedence over nearly every other familial event. When a family member dies, he or she is still cared for until a funeral can be given, often for weeks or even years after death.

During this time, the deceased isn't believed to be dead but referred to as to makula' — a sick person. They are given food and water regularly and are still very much a part of their family's daily life.

The idea of not just keeping — but caring for — a corpse in your household for weeks and potentially years might seem unthinkable for most people, especially Westerners. But in Torajan culture, it's commonplace.

"We do this because we love him and respect him so much," a Torajan man named Yokke told National Geographic, in reference to his deceased father.

In the time between a person's death and their burial, verses from the Bible are read daily, while the corpse is preserved — and eventually mummified — with a solution of formaldehyde and water.

It's only when a suitable amount of money has been raised and every relative has been contacted that the family begins funeral and burial preparations.

A funeral is viewed as a showing of status for Torajan families. It's such a costly and important affair that people often go into debt to provide a proper funeral for their loved ones.

A man may even put off taking a wife if he knows that his would-be bride has a relative who may die soon. 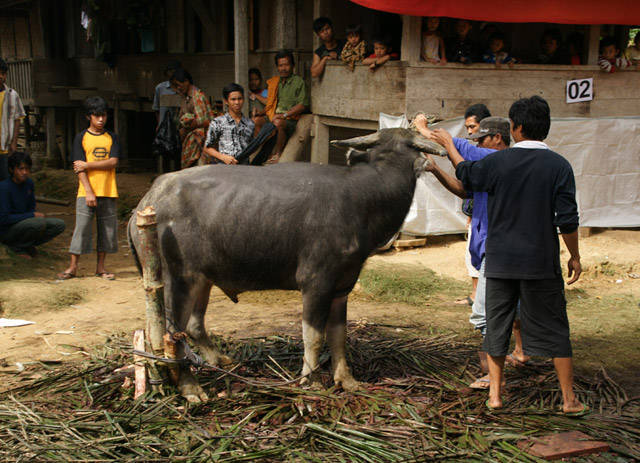 Rejselyst/FlickrA buffalo is prepared for slaughter as part of a funeral celebration.

The funeral itself — called Rambu Solo — is a monumental event involving the entire village, and usually happens in August or September each year. It can take anywhere from a few days to several weeks depending on the importance of the individual.

The funeral festivities include prayers, dancing, singing, mourning, sacrifice of water buffalo, and even cockfights.

Indeed, it's widely believed that the more water buffalo slaughtered in honor of the deceased, the quicker the dead will be able to move with the herd to puya, the land of souls.

With a single water buffalo costing anywhere from $10,000 to $40,000, the average family can only afford to purchase a couple animals. Meanwhile, a wealthy family can easily employ more than 100, including the prized albino water buffalo.

The sacrifice of the buffalo is a rather bloody spectacle with the animal paraded out after having completed feats of strength known as Ma'pasilaga Tedong. Two buffalo slam horns and duke it out while the entire village watches, in a fight to honor the deceased. Then, a master of ceremonies addresses both the crowd and animals before a buffalo has its throat slit.

Their heads are then removed and lined up, while the meat is divided up and given out to family and friends to enjoy a feast in honor of the dead.

It's not uncommon for tourists with a strong stomach to be invited by a family to stay for the slaughter, as their presence boosts the family's stature.

On the final day of the funeral, the body is taken to its resting place, which is typically a tomb carved into a cliff or an ancestral funeral tower.

These tombs may be as high as 100 feet above the ground and are built by specialists who climb without any safety gear. Much like the case with the buffalo, the height of the tomb typically goes hand in hand with the status of the individual. 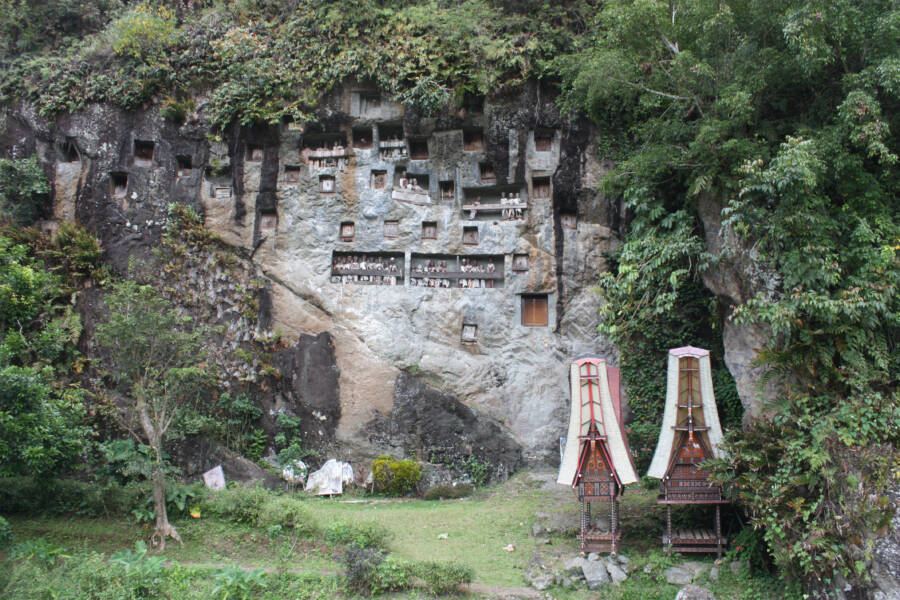 Arian Zwegers/FlickrA cliff containing the coffins and effigies of many Torajans.

Meanwhile, if the deceased happens to be a baby that has died before he or she began teething, they'll be placed in a hollowed out portion of a tree. These "baby trees" are believed to absorb the spirit of the child when they regrow.

One last key element of the funeral are wooden or bamboo effigies of the deceased called tau tau. These effigies are meant to be placed on a balcony in front of the dead person's tomb.

Families often spend a small fortune to have a detailed tau tau of their loved one made and may decide to keep it at home out of fear of it being stolen.

If you think the Toraja were done with the dead following these elaborate and expensive rituals, think again. In a ritual known as ma'nene, Torajan families tidy up the mummified bodies and their tomb every one to three years, usually in August.

Relatives who may have been dead for well over a decade are removed from their crypts, cleaned of any bugs, changed into a fresh set of clothes, and wiped and sprayed from head to toe. 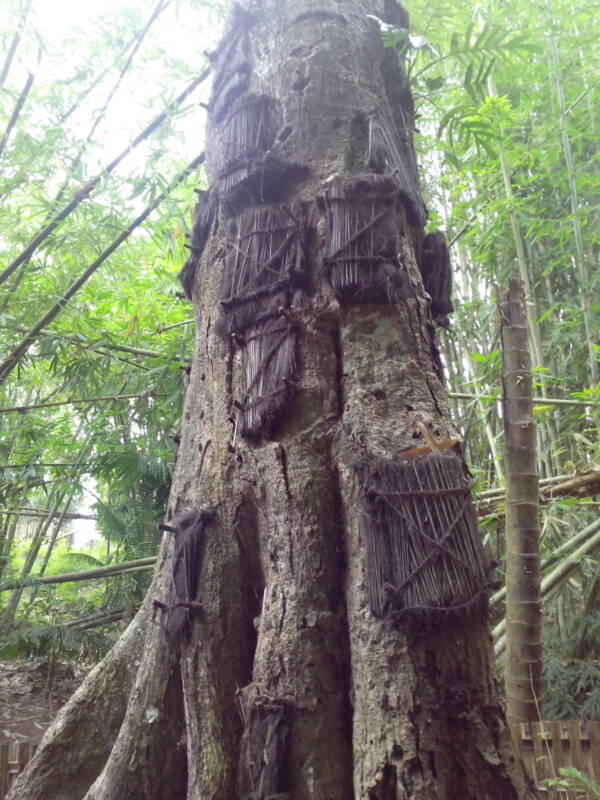 This provides a chance for the Toraja to see how well the dead body is holding up; a well-preserved body is seen as a blessing.

More importantly, this "second funeral" gives an opportunity for the younger generations to connect with their ancestors and bond with the family's lineage. It's not unusual to see young Torajans share a smoke with their dead great-grandfathers, or take selfies with their mummified grand-grandmothers.

The practice helps to remind Torajans that they're part of a long line of people stretching back hundreds of years.

More so than other cultures, the Torajans truly embrace the idea that the dead are never really gone.

Death is not seen as something to fear, but a normal step in life that is embraced fully. Thanks to this, families don't attempt to keep their ill individuals alive for as long as possible through modern medical practices, but allow death to happen naturally.

And there's certainly wisdom to be gained from the Torajans' natural approach of dealing with death — the one inevitable process that ties all of humanity together.

Next, have a look at some other peculiar death rituals like "endocannibalism." If you've had your fill of death, consider exploring some of the more unusual mating rituals from around the globe.