Instead of several days, it took Pierre Carter just 20 minutes to descend Mount Everest on his paraglider. 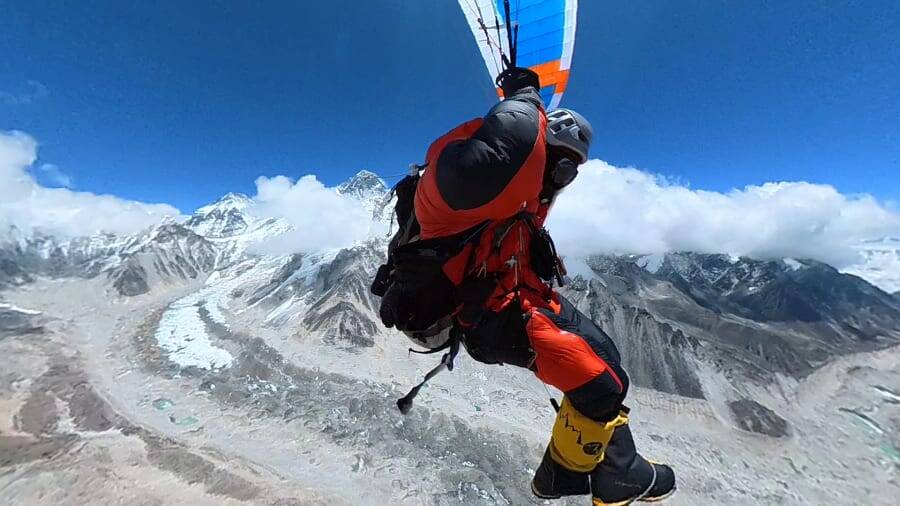 Pierre Carter/7 Summits 7 FlightsPierre Carter paraglides over the Himalayas after taking off from an altitude of 26,000 feet at the South Col on Mount Everest.

As dozens of climbers slowly made their way down Mount Everest last month, one mountaineer soared above them all. At noon on May 15, 55-year-old Pierre Carter took off from the South Col of Everest in a paraglider and flew to the ground, landing in just 20 minutes.

Carter is the first person to legally paraglide from Mount Everest after he was granted the first-ever permit to do so by the Nepalese government, which had officially prohibited the practice until now.

Per the terms of his permit, Carter was not allowed to paraglide from the mountain’s 29,032-foot summit and was limited to launching from no higher than around 26,000 feet. So he chose the South Col, a ridge that connects Everest to Lhotse, the world’s fourth-tallest mountain, and jumped, filming his entire descent with a 360-degree camera.

“Once you’re in the air it is all relative,” Carter said. “But the take off’s always difficult the higher you are… your glider doesn’t want to fly as easily.” 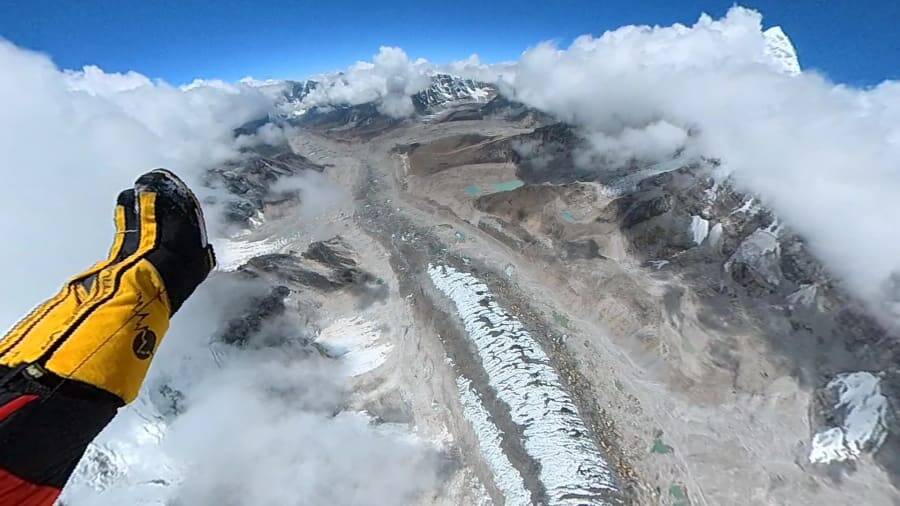 During his flight, Carter reached speeds up to 50 miles per hour and landed in the Nepalese village of Gorak Shep, which sits at an altitude of 16,942 feet and lies about four miles from the Everest Base Camp. At the landing site, a Sherpa guide was waiting with a change of shoes so he wouldn’t have to wear his heavy snow boots to hike back.

According to CNN, Carter had originally planned to summit Mount Everest and then descend to the South Col before paragliding the rest of the way down. But weather conditions and a brief bout of altitude sickness prevented him from doing so.

A native of Johannesburg, South Africa, Carter first became interested in climbing at an early age and paragliding soon after. As early as 1998, he had the idea to climb and paraglide from the world’s Seven Summits, the tallest mountains on each of the world’s seven continents, according to his 7 Summits 7 Flights project website.

He first successfully climbed and flew from Mount Elbrus and Aconcagua, the tallest peaks in Europe and South America. Since then, he has also paraglided from Mount Kilimanjaro in Tanzania, the Carstensz Pyramid in Indonesia, and Mount Kosciusko in Australia. In 2016, he summited Denali in Alaska but was denied a permit to paraglide down.

With Mount Everest conquered, all that remains is Mount Vinson in Antarctica, though he also has plans to climb and fly from Mount Cook in New Zealand. 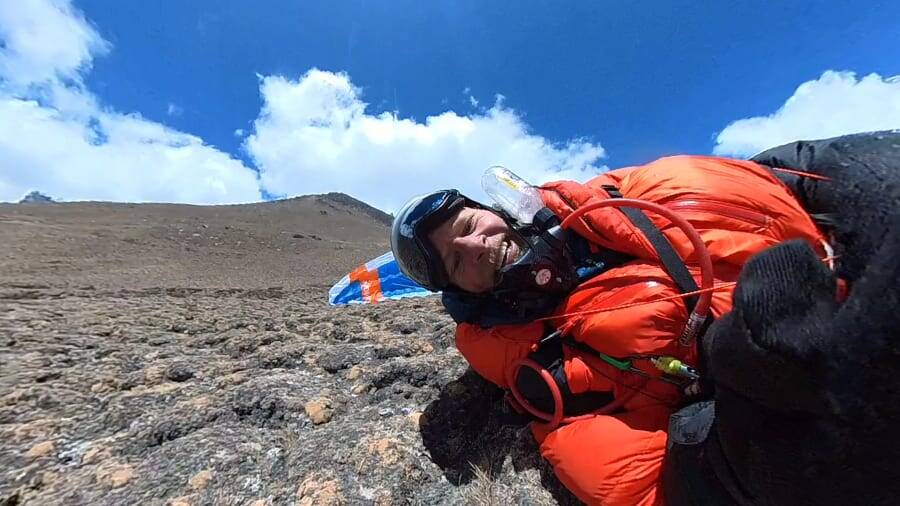 Pierre Carter/7 Summits 7 FlightsPierre Carter landed in the Nepalese village of Gorak Shep, about four miles from the Everest Base Camp.

Carter is not the first person to paraglide from Mount Everest, although the others did so illegally. According to The Himalayan Times, French alpinist Jean-Marc Boivin made the first flight in 1988. Then, a French husband and wife tandem team, Bertrand “Zebulon” Roche and Claire Bernier, flew down in 2001. And in 2011, Sano Babu Sunuwar and Lakpa Tsheri Sherpa became the first Nepalese paragliders to accomplish the feat.

But the Mount Everest flight was about more than a personal goal, Carter says. He wanted to demonstrate a new way of enjoying the mountain itself for all climbers and adventurers — legally.

So Carter partnered with the Nepalese company Asian Trekking to make the historic flight. But its CEO, Dawa Steven Sherpa, told him that he was unlikely to get a permit because the government had denied them for decades. Still, Carter’s resolve paid off. According to CNN, he was already in the Himalayas acclimating to the altitude when word of his approval came through.

“Something happened in the politics. I’m not sure exactly what. But a minister changed somewhere along the line, who was obviously blocking it. He left and another minister came in. And Dawa just suddenly sent me a message saying, ‘I think we’re going to get a permit. There’s a new minister,'” Carter told CNN.

“Many climbers are also paragliders and the idea of climbing and flying down is gaining popularity,” Sherpa told AFP. “Authorities now see this can boost Nepal’s tourism industry, especially after COVID.”

Speaking with CNN, Carter added, “The precedent has been set. I think we’re going to see lots of people flying next year.”

After reading about Pierre Carter’s historic paraglide, learn about how Mount Everest got its name from a man who never even laid eyes on it. Then, read the stories of Mount Everest’s most haunting deaths — and the frozen bodies that were left behind.