Boasting a wingspan of up to 11 inches, the Queen Alexandra's Birdwing is a magnificent sight in the forests of Papua New Guinea. Unfortunately, it's also in danger of going extinct. 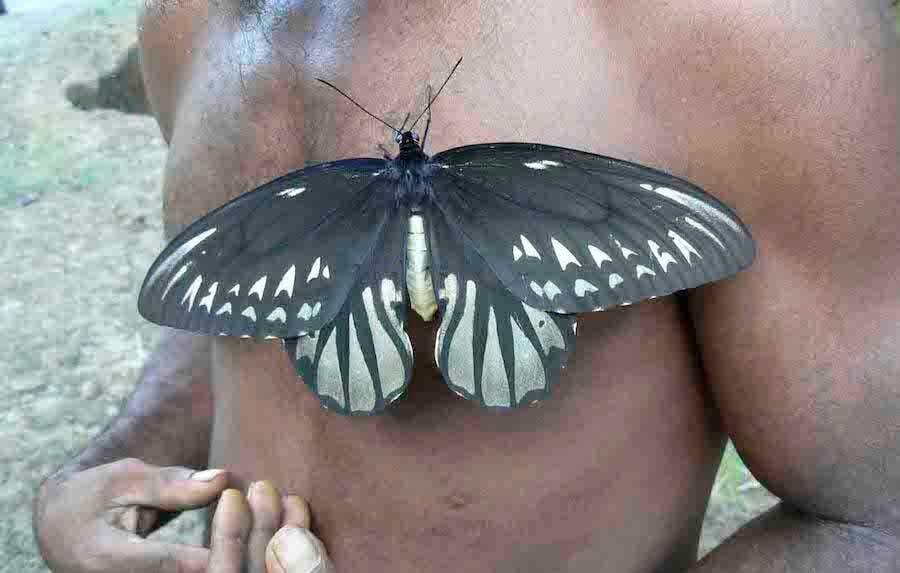 TwitterThe Queen Alexandra’s Birdwing butterfly can grow up to 11 inches in wingspan.

The Queen Alexandra’s Birdwing is the largest butterfly on the planet. Famous for its ability to grow up to 11 inches in wingspan, this magnificent creature also has an enthralling historical foundation.

From the butterfly’s discovery being funded by British banker Walter Rothschild to the animal’s christening being made in honor of Alexandra of Denmark, this species has certainly distinguished itself from the pack. Now endangered, this colorful critter clearly deserves a closer look.

The Queen Alexandra’s Birdwing (Ornithoptera alexandrae) was first discovered in 1906 by Albert Stewart Meek. The naturalist, who was employed by Walter Rothschild to seek out butterflies, recounted his discovery in Papua New Guinea in a 1913 book. 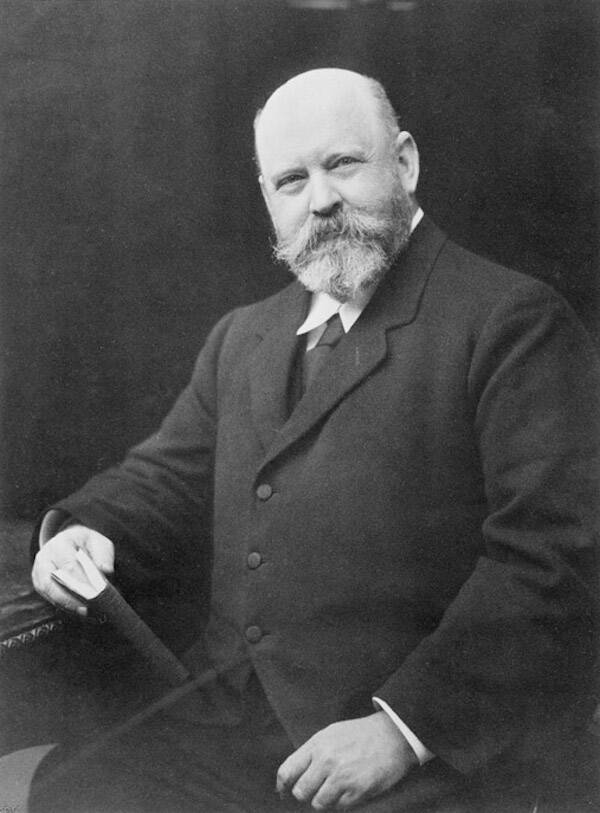 Wikimedia CommonsWalter Rothschild, a British banker and politician, was also a recreational zoologist — and he employed Albert Meek to collect butterflies for him.

As A Naturalist in Cannibal Land describes, Meek’s 20 years of research in Papua New Guinea and the nearby area was very focused on butterflies. His employer, a recreational zoologist himself, seemed to have a predilection for birdwings due to their vibrant colors, tantalizing mating rituals, and of course their long wings.

Though the Brit considered himself superior to those who lived in the region, his collecting methodology was far from perfect. While the Indigenous people fashioned nets out of spiders’ webs and sticks to catch butterflies, Meek opted for a gun to immobilize his aerial targets.

Though he used special ammunition to limit the amount of damage done to the butterflies, they would almost always be left with at least a couple bullet holes in their wings.

One day in 1906, he spotted a rather large butterfly in the forest and blasted it out of the sky. The results of this rather imperfect method are still on display today — with the Queen Alexandra’s Birdwing specimen in London’s Natural History Museum riddled with holes and tears. 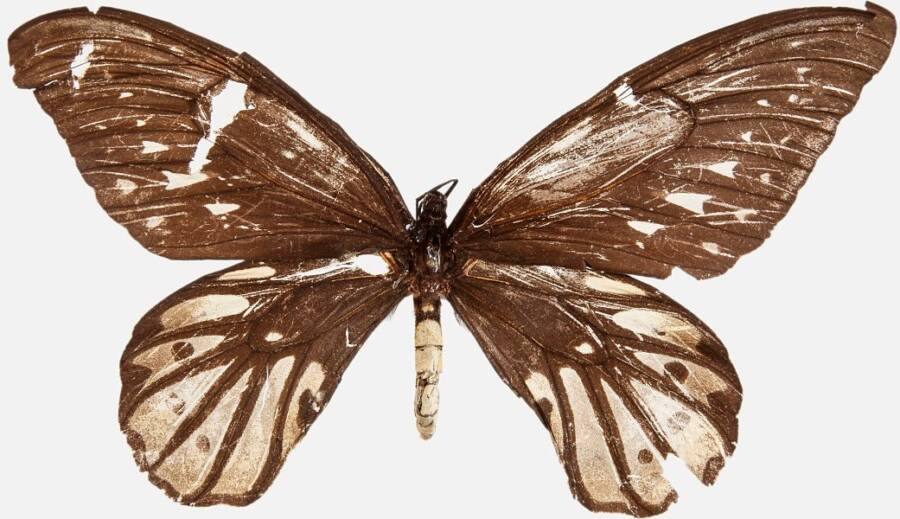 Walter Rothschild then prepared a scientific description of the butterfly. It was later named in honor of Britain’s queen, Alexandra of Denmark. She had been coronated in August 1902 after her mother-in-law, Queen Victoria, had died in 1901.

Though the genesis of its finding provides a curious glimpse at discoveries and politics of the time, the animal itself is tantalizing on its own.

The Life Of The World’s Biggest Butterfly

Perhaps one of the main reasons why the Queen Alexandra’s Birdwing is so mesmerizing is because it’s so much larger than its smaller and seemingly more delicate counterparts.

As its name perhaps implies, the female reigns supreme — at least in terms of wingspan. The female can reach an 11-inch wingspan and often measures at least 9.8 inches. Aesthetically, females are distinguished by brown wings marked with cream spots. They also have a cream-colored body with a red tuft of fur on the thorax.

Meanwhile, males are slightly smaller and much brighter in color, with blue and green markings and a yellow abdomen. Males usually reach a wingspan of up to 8 inches — which is still pretty big for a butterfly.

As for the mating rituals of Queen Alexandra’s Birdwings, they’re nothing short of tantalizing. Males hover over females, showering them with pheromones to induce copulation. Recent studies have shown that females will not accept males unless they have flown and swarmed over the forest trees known as Intsia bijuga, or “Kwila,” when they are in bloom. No one knows why this is.

Ultimately, females are capable of laying up to 240 eggs during their lifetime — while carrying only 15 to 30 mature eggs at any given time. 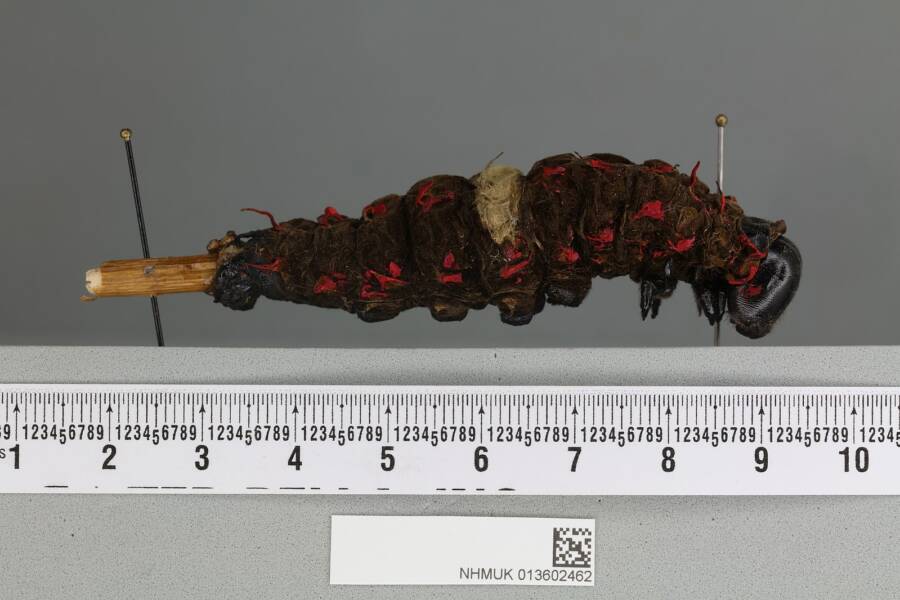 Wikimedia CommonsQueen Alexandra’s Birdwing larvae eat their own nutritious shells upon hatching, before continuing their metamorphoses into adult butterflies.

The species as a whole is restricted to the forests of Papua New Guinea. The butterfly’s preferred habitat is largely split between the Popondetta Plain and the remote Managalas Plateau in the north. As for the first specimen collected by Meek, that one was found near Biagi on the Mambaré River.

The entire species is known from four sub-populations in Papua New Guinea’s northeast coastal region. And unfortunately, recent assessments of its population reveal that its numbers have drastically declined.

Though the birdwing has few major predators to fear, it’s often caught in spiders’ webs and subsequently eaten by birds and arboreal mammals. Meanwhile, its eggs are commonly eaten by ants and other bugs, and the larvae are gulped up by lizards, toads, and birds like cuckoos.

But sadly, what’s most concerning to the survival of this species isn’t anything that’s naturally found in the forest. Instead, it has everything to do with human encroachment. 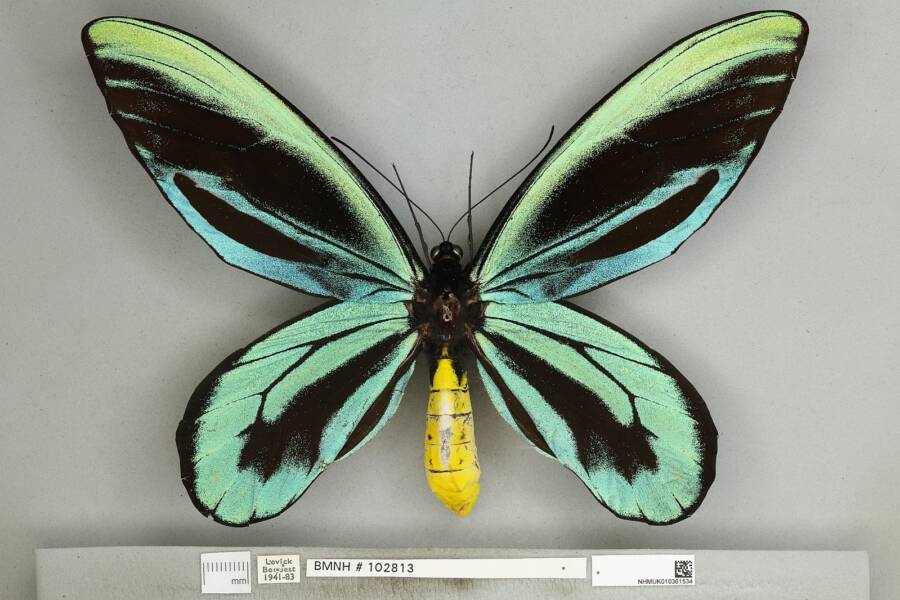 Wikimedia CommonsThe species is highly valuable on the black market due to its rarity — along with its remarkable size and color.

Despite its universally acknowledged status as one of the most beautiful butterflies in the world, very little is known about Queen Alexandra’s Birdwings. What we do know is that they hatch from eggs, turn into caterpillars (larvae), become pupae (or chrysalises), and then transform into capable — and very large — butterflies.

After shedding their skin several times during growth, they form a very thick skin for the pupa stage. Finally, the caterpillar’s bodies break down inside the skin and re-form into the butterflies they’re meant to be.

This metamorphosis can take about a month to complete. Then, on a particularly humid morning, the butterflies emerge and spread their wings.

Ultimately, our data on the Queen Alexandra’s Birdwing ends there. For 60 years following Meek’s discovery, not a single attempt was made to quantify the species. They were merely used as collector’s items for naturalists like Meek until the Australian government took action in 1968.

Before Papua New Guinea gained its independence in 1975, the Australian government legislated the Fauna Protection Ordinance, which made the collection of animals like this illegal. It was only in the 1970s that scientists began mapping the butterfly’s distribution in the country at all.

When experts counted only 150 Queen Alexandra’s Birdwing specimens over a 10-day period in 1992, it became clear that they were observing a dwindling population. A few years later, those numbers dropped — as they did yet again in the mid-2000s. By 2008, only 21 adults were observed over a period of three months.

An interview with an Indigenous local about the devastating effects of the palm oil industry in the region.

As of right now, forest loss from tree harvesting is the greatest threat to this species. And tree harvesting has accelerated in recent years, thanks to the thriving palm oil industry in the region. Considering that palm oil is found in just about everything from packaged foods to soaps to cooking oil, it’s no wonder why the product continues to be in high demand.

By decimating forests to create palm plantations, thousands of acres within the butterfly’s range are transformed into useless environments for the species as its food supply is wiped out. Worse still, this butterfly species is highly valued on the black market for its rarity. Back in the 1980s, they could sell for up to $3,000. Now, a pair can fetch up to $10,000.

Ideally, more mercenary butterfly hunters follow Animal Crossing‘s lead, as the game offers players an option to donate this species to a museum.

With the devastating effects of human encroachment on its habitat and such a high demand in its illegal sale, the Queen Alexandra’s Birdwing certainly has a rough road ahead.

After learning about the largest butterfly in the world, read about the candiru, the penis-probing fish of your nightmares. Then, take a look at the 15 weirdest freshwater fish ever caught.