Roza Shanina racked up 59 Nazi kills in just 10 months on the Eastern Front — and her diary captured it all. 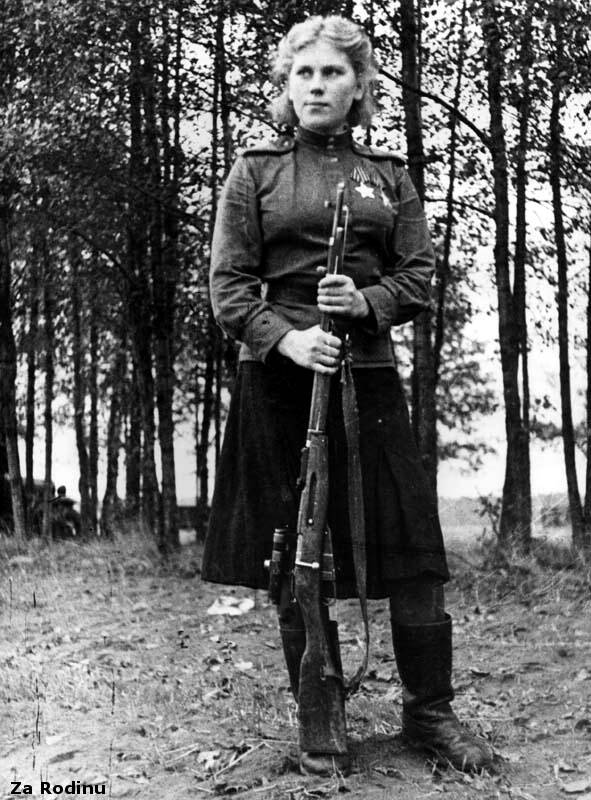 In April 1944, a woman pulled the trigger on her sniper. “I’ve killed a man,” she said as her legs gave way and she slid down into the trench.

That first kill marked the beginning of a short but legendary career. By the end of the year, Soviet sniper Roza Shanina was known for her deadly shot and was hailed as the “unseen terror of East Prussia.”

Roza Shanina was born on April 3, 1924 on a commune several hundreds miles east of Leningrad (now St. Petersburg) in the Soviet Union, near a river that feeds into the White Sea to the north. Her parents were Anna, a milkmaid, and Yegor, a logger and World War I veteran.

After completing elementary school, Shanina was determined to continue her education and walked eight miles back and forth every day to the nearest middle school in Bereznik.

She was a keen student with an independent spirit, and in 1938, when her parents refused her request to pursue secondary school and study literature, the 14-year-old ran away, walking 50 hours to the nearest train station, and heading to the northern city of Arkhangelsk (“Archangel” in English).

Shanina moved in with her brother Fyoder until she was admitted to the city’s secondary school and was granted a dorm room and student stipend. But when the Nazis broke through the USSR’s western border in June 1941, breaking the countries’ non-aggression pact, the economy plummeted, free secondary education was cut, and Shanina lost her stipend.

To cover her costs, young Shanina took a job at a local kindergarten, hoping to pursue a career as a schoolteacher. 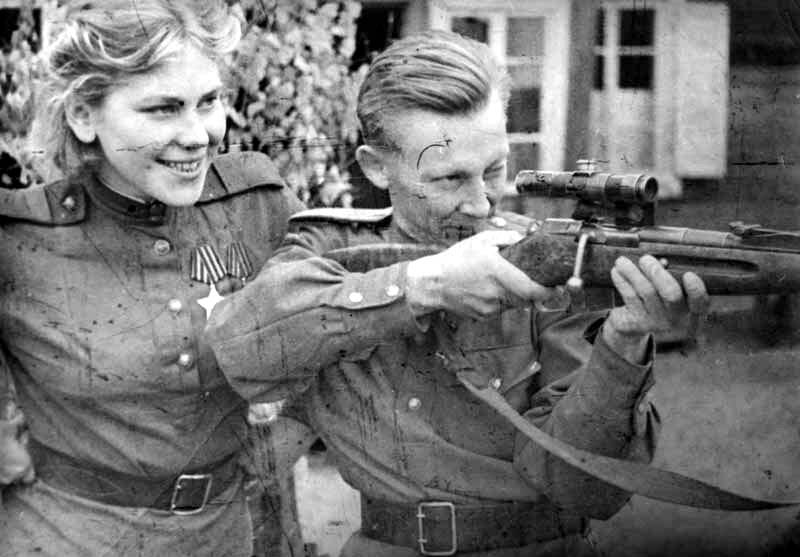 Za Rodinu/FlickrRoza Shanina (left) teaches a man how to shoot.

The war crept closer to home and soon, the Nazis began bombing Arkhangelsk and the brave teenager volunteered for air raid duty on the roof of the kindergarten where she taught. When she heard the news that her brother Mikhail was killed in a bombing raid in December 1941, she was determined to join the war effort, to honor and avenge his death.

While Soviet military leadership at first prohibited women from joining the ranks, as circumstances became more dire, they changed their minds.

Along with tens of thousands of other Russian women, Shanina applied to join the army.

She enrolled in the Female Sniper Academy and graduated with honors in April 1944, right around her twentieth birthday. She was instantly recognized for her remarkably precise shooting, and the academy begged her to stay on as a teacher rather than go to the front where she risked death.

But adventure called, and she answered, becoming a commander in the 184th Rifle Division’s female sniper platoon right after graduation.

Three days after her arrival at the western front, Shanina made her first kill. She later described it to the press:

“Finally, in the evening a German showed in the trench. I estimated the distance to the target was not over 400 meters. A suitable distance. When the Fritz, keeping his head down, went toward the woods, I fired, but from the way he fell, I knew I had not killed him. For about an hour the fascist lay in the mud, not daring to move. Then he started crawling. I fired again, and this time did not miss.”

Realizing what she did, her legs crumbled beneath her and she slid into a trench. When she said in shock, “I’ve killed a man,” a female comrade called back, “That was a fascist you finished off.” 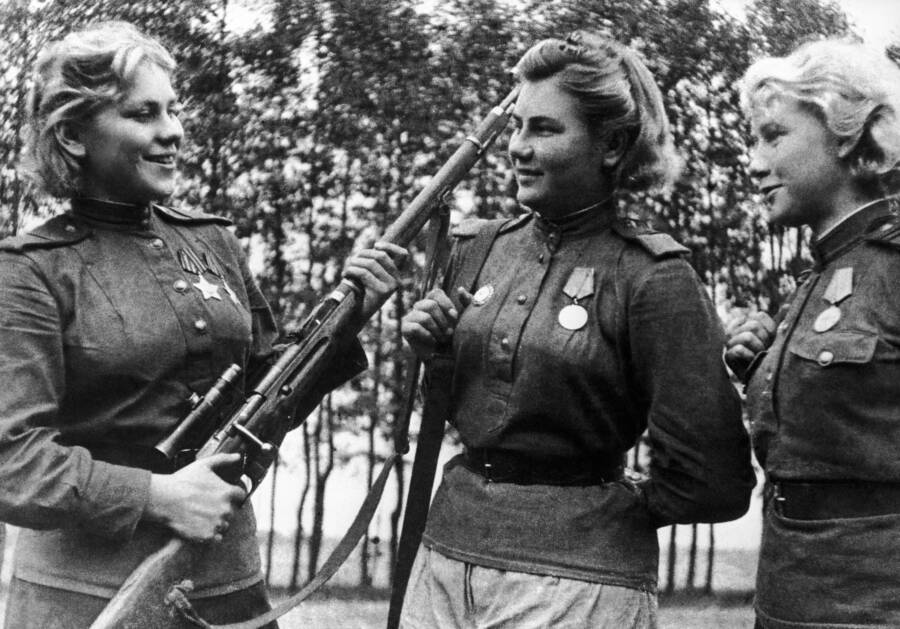 TASS/Alexander Stanovov/Getty Images Roza Shanina (left) with fellow snipers Alexandra Yekimova and Lidia Vdovina in Belarus. Shanina refused to have her picture taken unless her friends could join her.

That May, Shanina was awarded the Order of Glory — the first female sniper to receive this honor —and became known for her ability to score “double hits,” taking out two targets in quick succession.

She would ultimately rack up 59 kills.

Still, when Shanina arrived on the front, she was frustrated. She kept finding herself assigned to positions in the rear, due to a Soviet policy to keep women from the front lines.

On July 29, 1944, she wrote to her friend and war correspondent, Pyotr Molchanov, begging him to intervene on her behalf: “If you knew how passionately I want to be with the fighters at the front and kill Nazis….I ask you to talk to someone in charge, although I know that you are very busy.

Refusing to sit still, she got into the habit of going AWOL and running up to the front lines to increase her score of “dead little Hitlers.”

Soon enough, as Roza Shanina’s death toll steadily escalated, the press began to notice her. “Follow the example of Roza Shanina!” read one headline. “One cartridge, one fascist!” read another. One Soviet war photographer described her as “a tall, slender girl with smiling eyes” who wouldn’t agree to a photo unless her friends could be in it too.

Reporting from Moscow on Sept. 23, 1944, the Ottawa Citizen profiled the “Red Army Girl” who “killed five Germans in a single day as she crouched in a sniper’s hideout.”

At this point, the young sergeant’s kill number was 46, her duty beginning each misty dawn “when she crawls through a muddy communications trench to a specially camouflaged pit from which she can overlook German territory.” 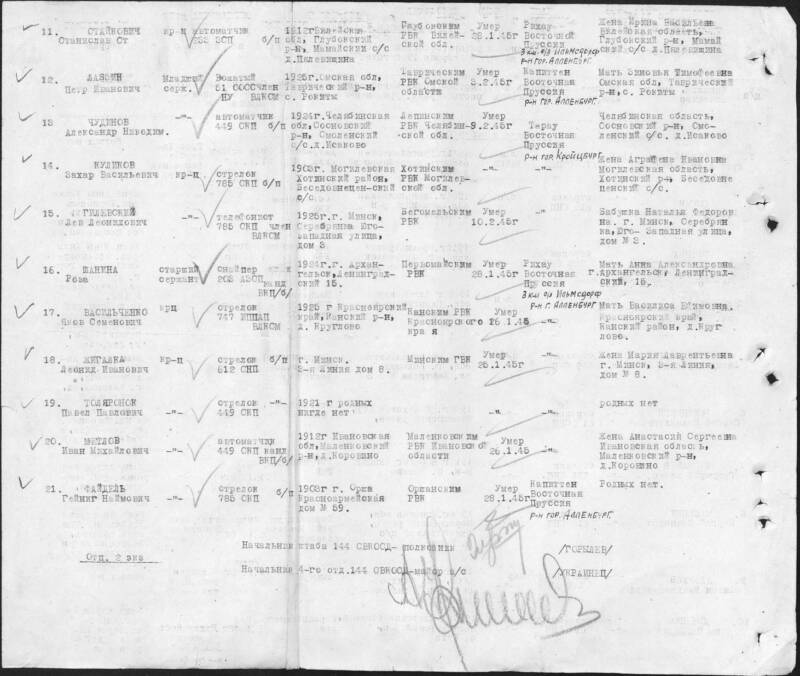 The article described how just the other morning, Shanina waited silently, motionless, as a German machine-gunner appeared at the exit of a pill-box made of sandbags and logs. He “crawled sleepily” toward an unprotected camp and Shanina fired confidently, instantly toppling him with one shot. Two comrades rushed out to help the man, and Shanina shot them both. Two more Germans followed and were instantly cut down.

To put it simply, Shanina was the “unseen terror of East Prussia,” emblematic of how deadly and almost otherworldly the Soviets could be.

By October, she was a celebrity. “Let the Russian mother rejoice who gave birth to, brought up and gave this glorious, noble daughter to the Motherland!” Soviet journalist Ilya Ehrenburg wrote. Women’s magazines depicted her wearing a skirt with the armor of an ancient Russian warrior while holding a rifle.

Meanwhile, Shanina began documenting her time on the front in her diary, reflecting on her time in battle as well as meditating on her loneliness, heartbreak, and hopes for the future.

The war stunted her love life. “My heart does not trust anyone,” she wrote on Oct. 10, 1944. “I blame this scum that comes with army life, wrecking everything, not caring about a girl.” She made some friends and the occasional boyfriend, only to lose many of them in battle.

As Shanina’s the days on the frontlines lengthened and incoming gunfire became seemingly endless, her diary entries became increasingly sorrowful.

“Frost in the tank, unaccustomed to tank smoke and it hurts my eyes; I can’t breathe these fumes. Slept like the dead,” she jotted down on Jan. 16, 1945. She continued: “I’m finally sure that I’m not capable of love.”

Wikimedia CommonsAfter just 10 months on the Eastern Front, 20-year-old Roza Shanina was killed while trying to protect a comrade.

The next day may have been even worse. “Today for me seemed like a month,” she wrote on January 17. “Nearly vomited at all the body parts. Bandaged the wounded and moved forward….Frost, hunger. Went into a unit. The guys threw some filthy compliments at me. Filthy language everywhere. So tired. I went off on my own.”

On Jan. 24, 1945, she wrote that the head of the regiment chased her and grabbed at her “like he was in a brothel.” Later in that same entry, she described how the colonel’s son drunkenly threw her down on the couch and forcibly kissed her. She cried out to his father: “Just because I’m a girl, does that mean everyone has to kiss me?”

Her untimely death cut her life short, just as she was looking to the future, feeling isolated and wishing for more. On Jan. 27, 1945, two soldiers found her on the field with her chest blown open by a shell, slumped over a wounded officer to protect him.

It too late to save her. She was buried with full military honors in eastern Germany.

As the first female Soviet sniper to be awarded the Order of Glory and one of the deadliest Soviet snipers of World War II, her legacy looms large, especially in Russia.

Her friend and pen pal, Pyotr Molchanov, held onto her letters and her diaries for 20 years, and in 1965 allowed them to be published, granting Roza Shanina the recognition her story deserves.