"To lose a completely healthy animal would be an oddity... To lose five young, very healthy, in great shape, perfect bulls that are all basically the same age... that is so outside the bounds of normal." 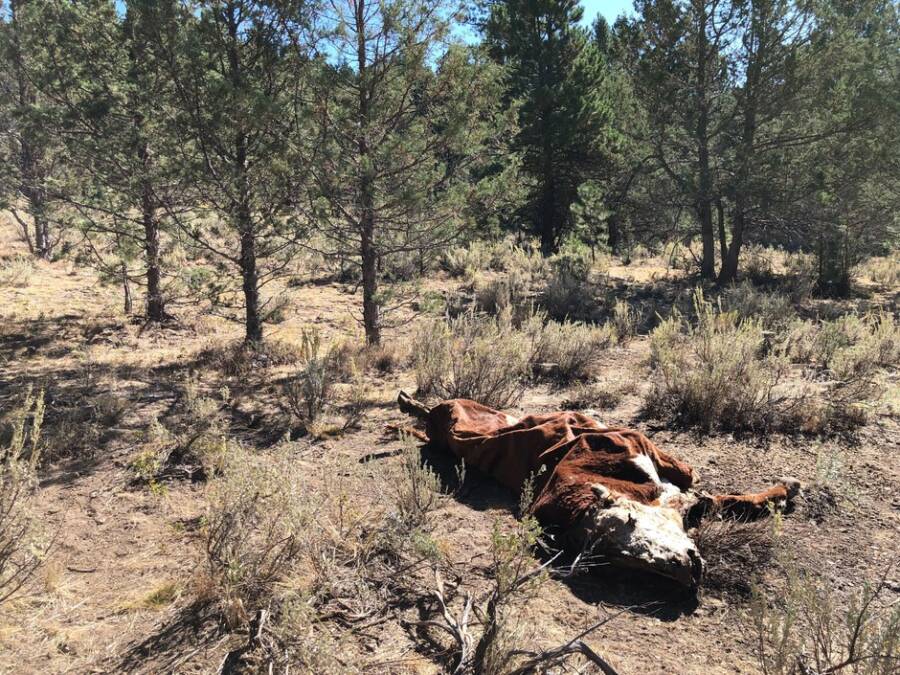 Anna King/NW News Network Investigators and residents are mystified by the bizarre killings of at least five bulls this year.

The first of the killings came in the middle of the summer. The deflated corpse of a dead Hereford bull was found in a ravine in eastern Oregon, and the details of its death — tongue and sex organs cleanly cut off, no drop of blood left — bewildered local authorities.

Then four more dead bulls were found within a mile and a half of the first corpse, with all the same mutilations.

There were no signs that these bulls were shot or suffered from a “natural” cause of death, such as an attack by a wild animal or digesting poisonous plants. Now, three months later, investigators are no closer to finding the killer.

“To lose a completely healthy animal would be an oddity,” said Colby Marshall, vice president of the Silvies Valley Ranch that owned the now-dead bulls. “To lose five young, very healthy, in great shape, perfect bulls that are all basically the same age…that is so outside the bounds of normal activity.”

According to the Associated Press, there have been five dead bulls discovered showing these bizarre injuries so far. Understandably, the grotesque nature of the cattle killings has led to safety concerns among ranchers, with workers now going out in pairs and carrying firearms when they venture around the grounds.

“I mean this is the frontier,” Marshall told Oregon’s KOPB-FM. “If some person, or persons, has the ability to take down a 2,000-pound range bull, you know, it’s not inconceivable that they wouldn’t have a lot of problems dealing with a 180-pound cowboy.” 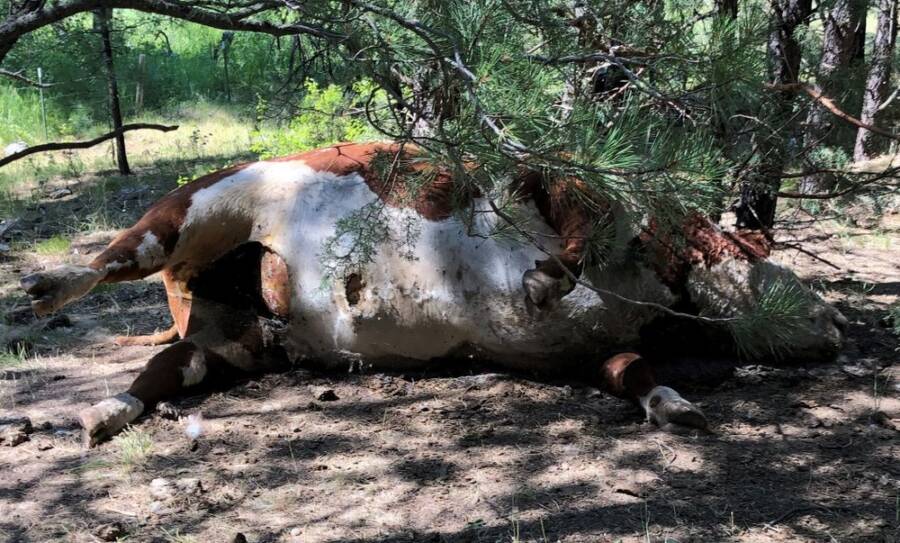 Silvies Valley Ranch via APThe first mutilated bull was found in eastern Oregon with its blood drained, and its tongue and sex organs missing.

But it’s not the first time dead cows have showed up around Oregon. In 1975, a whopping 73 cows were reported dead, their corpses also mutilated. In at least 10 other states – mostly in the western and mid-western regions – similar cases have been reported.

The trend resurfaced in the 1980s, again in eastern Oregon. Then, the killings slowed down before increasing two years ago. A hunter happened upon some dead cows that turned out to belong to Andie Davis, who keeps her livestock at her home in Princeton, Oregon.

When Davies and her family got to the scene of the crime, they were stumped. Her son, a butcher, couldn’t believe the clean cuts that had been done to the cattle corpse. There were no tracks found around or near the body either.

That’s especially odd, said Davies, since in the wild fields of Oregon, “everything you do leaves tracks.”

The dead bulls are a big financial loss for the ranch. They were young breeding bulls which meant that they were top-valued livestock, worth about $6,000 each.

That’s not counting the potential income that would have been brought in through their future offspring.

Because of the cattle’s high value, one of the theories floating around is that the slayings were a deliberate attempt to hurt the ranch financially.

The Silvies Valley Ranch is a working ranch that doubles as a destination resort, with luxury cabins that cost up to $849 a night. The property features golf courses, shooting ranges, a spa, and other amenities typically found at luxury establishments.

But Marshall doubts that the cattle murders were targeted attacks. He’s leaning toward a more interesting theory. 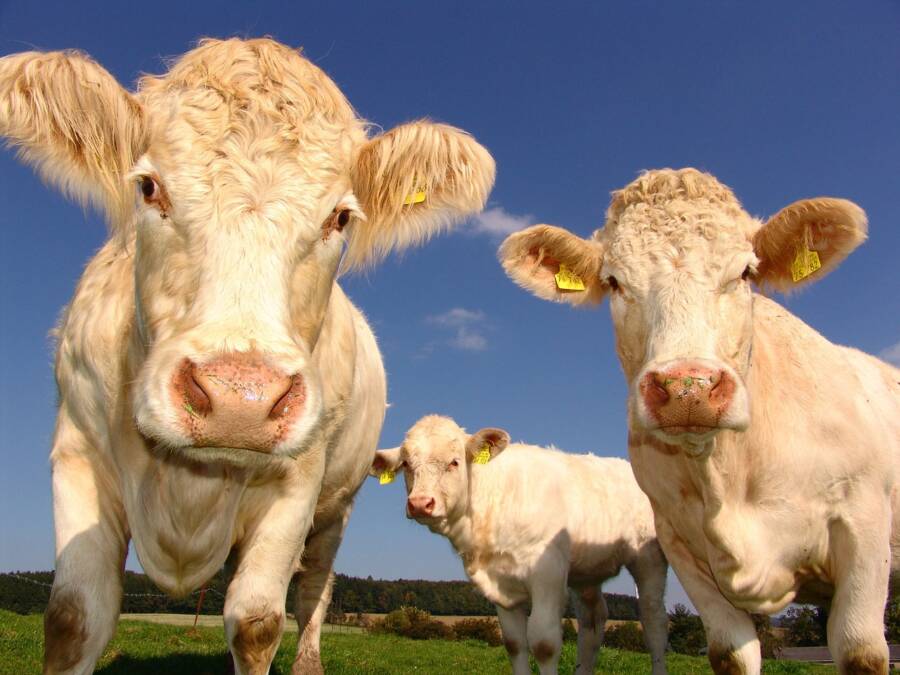 Similar killings of cattle around eastern Oregon can be traced all the way back to the 1970s.

“We think that this crime is being perpetuated by some sort of a cult,” he said, and he’s not the only one.

The Harney County Sheriff’s Office is currently investigating the possibility of a cult group harvesting the cows’ organs to perform some sort of ritual sacrifice, a theory that was also widely believed to be behind the cattle killings in the 1970s.

However, not everyone thinks cultists are the perpetrators. Others have alluded to bigfoot, Northern Vietnamese operatives, the Chupacabra, and, naturally, aliens.

“A lot of people lean toward the aliens,” said Deputy Sheriff Dan Jenkins, who has been screening tips about the dead bulls received by the office. “One caller had told us to look for basically a depression under the carcass. ‘Cause he said that the alien ships will kinda beam the cow up and do whatever they are going to do with it. Then they just drop them from a great height.”

The Oregon Cattlemen’s Association and the Silvies Valley Ranch offered up rewards — $1,000 and $25,000, respectively — for leads to the case, but the tips so far have evidently amounted to little.

Similar mysterious killings of wildlife have popped up elsewhere. In August, 42 dead donkeys were discovered around the Mojave Desert in California, their bodies riddled with gun shot wounds. Like that case, the bizarre killings of the five young bulls will likely remain a mystery for some time to come–if it is ever solved at all.

Next, read a brief history on Oregon’s reputation as a “white utopia” and follow the tragic story of a baby sea turtle who was found with 104 pieces of plastic in its belly.