Siberian craters have been popping up throughout the unseasonably warm region. What's causing it? 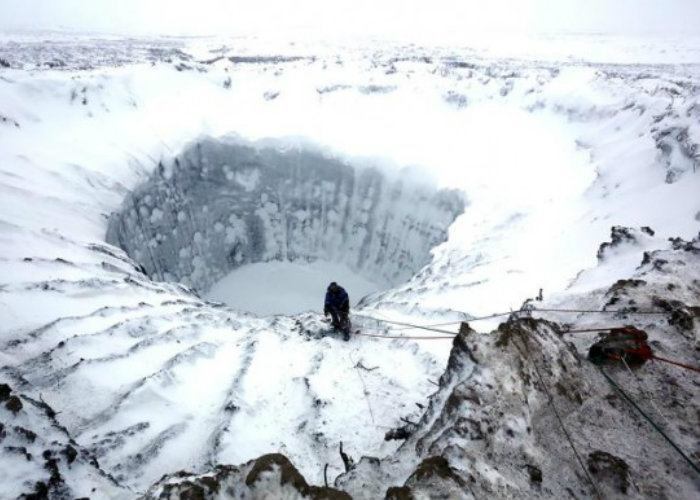 After the discovery of several mysterious craters in Siberia aroused a slew of public safety fears this past March, Moscow scientist Vasily Bogoyavlensky of the Oil and Gas Research Institute called for an “urgent” investigation into the craters’ origins. This decision came on the heels of a giant hole that formed in the Siberian permafrost last summer. Since then, researchers have discovered an astonishing seven craters in the region.

Two of the newly identified craters – also called funnels by researchers – have since turned into lakes. Scientists also identified 20 mini-craters in February that surround crater B2, which is close to oil and gas operations in Russia’s Yamal Peninsula. The craters were detected by Russian satellites, and scientists fear that there are dozens more out there.

Siberia is a vast region in northern Russia that extends from the Ural Mountains to the Pacific Ocean, and down to the border of China. The area has been known for its historically important volcanic eruptions, leaving scientists to wonder if the area’s unique geography contributed to the craters. 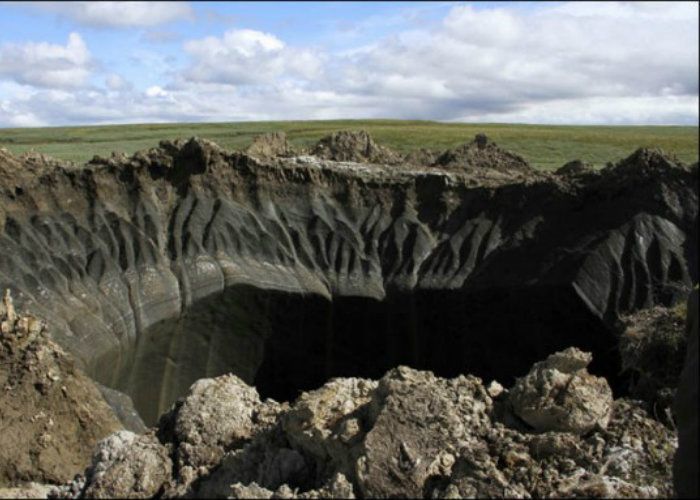 Scientists observed the first crater in the Yamal Peninsula, surrounded by debris. At 200 feet wide and seemingly bottomless, the crater truly shocked its discoverers. Just days later, reindeer herders found another crater just 10 kilometers away from the first crater. Later, two smaller craters revealed themselves near the villages of Antipayuta and Nosok. Unprofessional theories about the craters’ proliferation ranged from UFO landings to Russian nuclear testing. Scientists weren’t so sure. 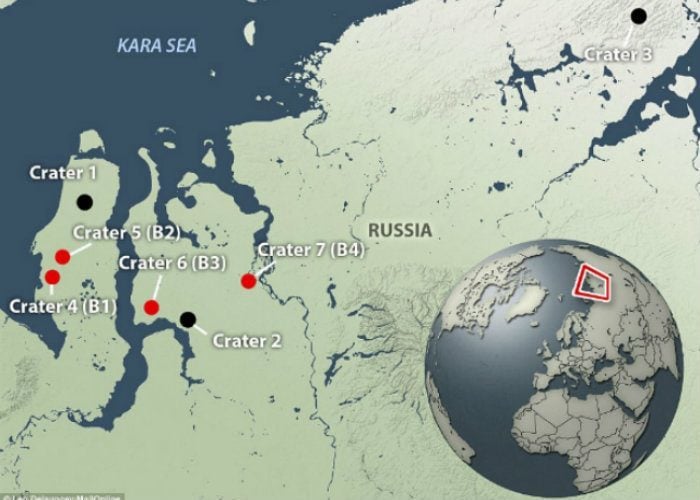 Initial investigations by the Russian Centre of Arctic Exploration included a bold descent into crater B1, and led scientists to believe that methane gas could be behind the craters’ formation. Methane is a powerful greenhouse gas that sleeps like the Great Ones beneath the Arctic seafloor and permafrost.

But when permafrost starts to melt, the matter of long-deceased plants and animals within it starts to decay. As that happens, flammable methane is released, which has caused implosions and eruptions in the past. That has pretty scary implications, especially if these eruptions take place near vital energy infrastructure or in populated areas. 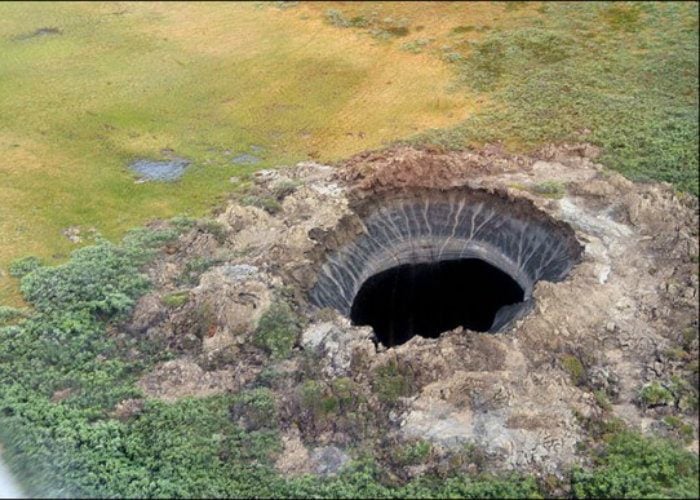 Scientists have attributed these Earth “burps” to climate change, and they may be partially right. As temperatures rise, permafrost melts and the Earth releases gas. However, researchers studying new satellite imagery soon realized that these craters are too shallow to tap into the methane below the surface and violently explode, creating the mystery craters.

Methane is found in permafrost at 740 feet or deeper, but the craters are around 50 feet in depth. So, they proffered up a simpler explanation for the craters’ occurrence: pingos. 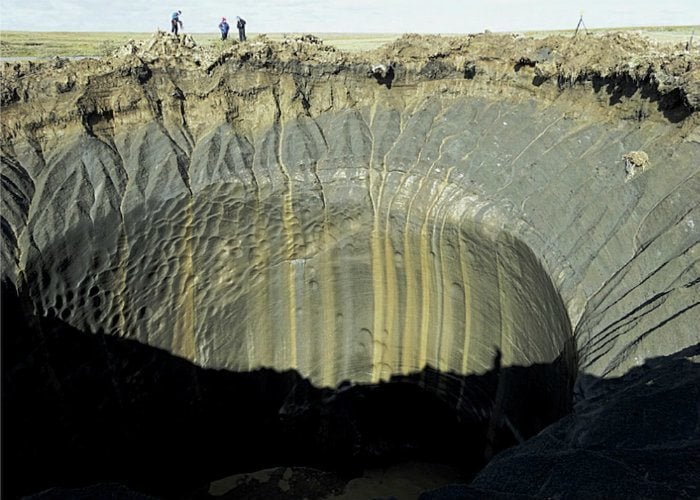 They may sound like a casino game, but pingos, or hydrolaccoliths, are quite literally ice plugs that form near Earth’s surface and develop a small mound or hill on top.

As temperatures rise, pingos collapse, and thus resemble craters. So what about the debris field around B1? Scientists from the U.S. Geological Survey’s Gas Hydrates Project believe that the collapsing pingos could have released compressed natural gas from beneath the pingos, which would have ejected nearby materials in the air.

This theory is substantiated by Russian satellite data that actually shows pingos in the positions where the craters formed. While this explanation is far less scary than forceful methane eruptions from the bowels of the Earth, what is scary is why this might be happening in the first place. 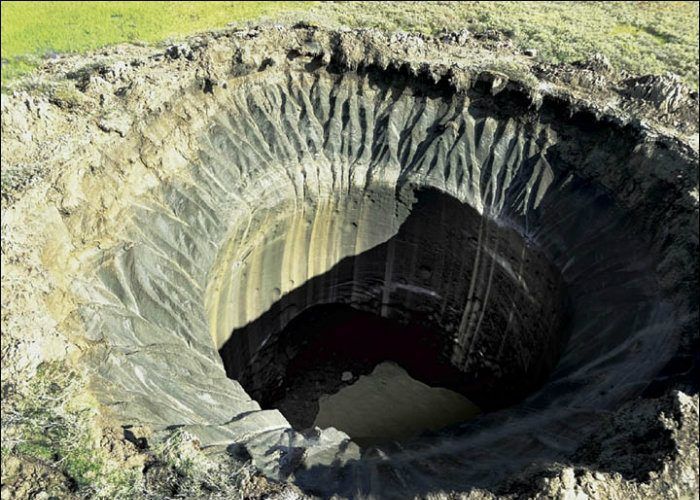 B1, the original crater found on the Yamal Peninsula.
Source: Siberian Times

Both methane build-up and collapsing pingos can be traced back to Siberia’s unseasonably warm temperatures this past year. Is this a result of human interference, or a natural process? Scientists aren’t positive. They do know, however, that it could be a sinking sign of things to come for other Arctic regions, including Alaska and northwestern Canada, which also have documented pingos. So next time you’re there, be sure to put on your hard hats, just in case.

Take a look at these photos to see more of Siberia’s mystery craters. 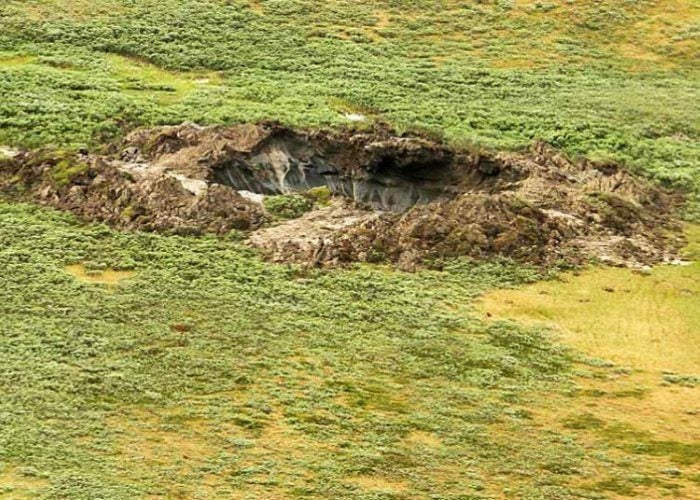 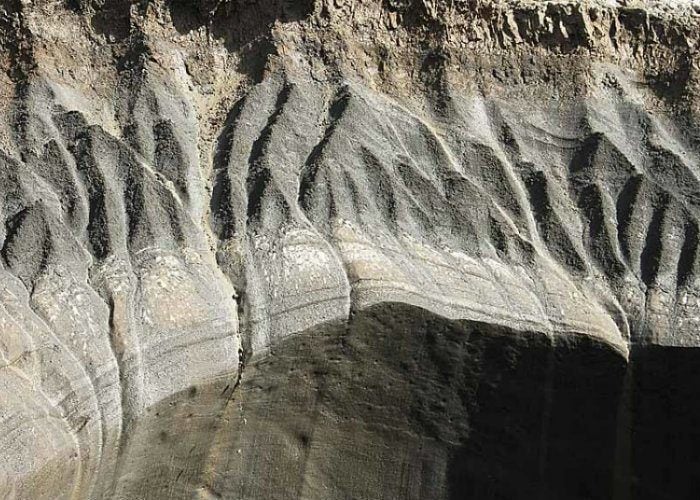 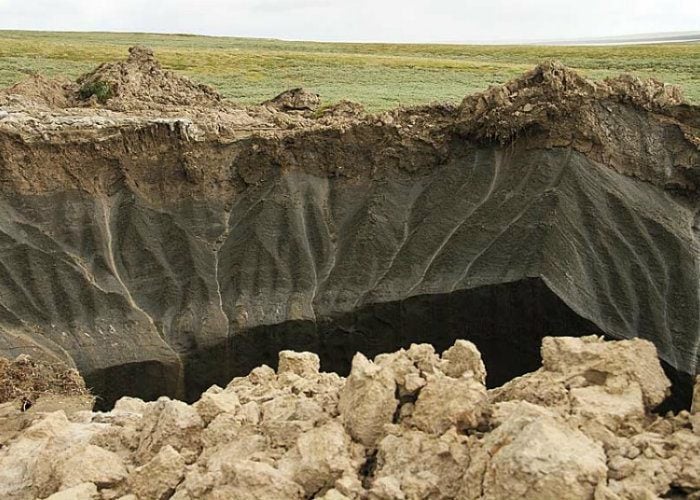 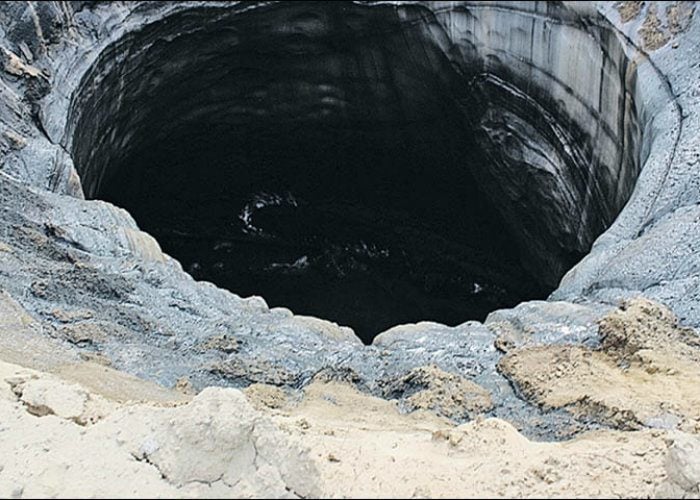 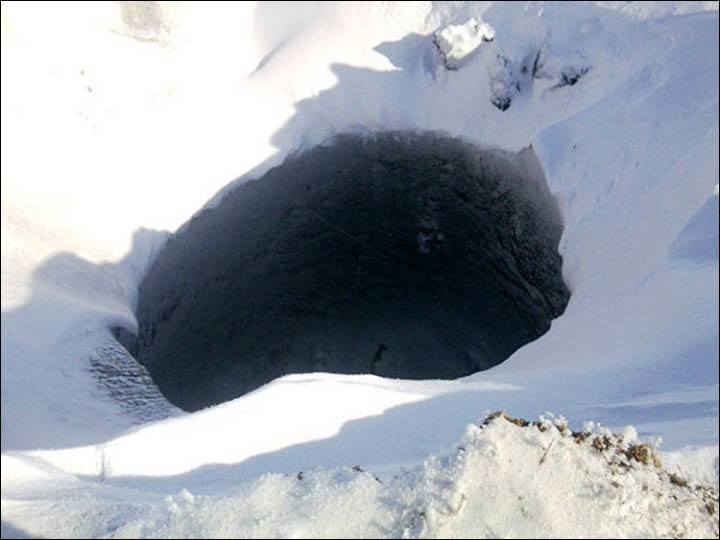 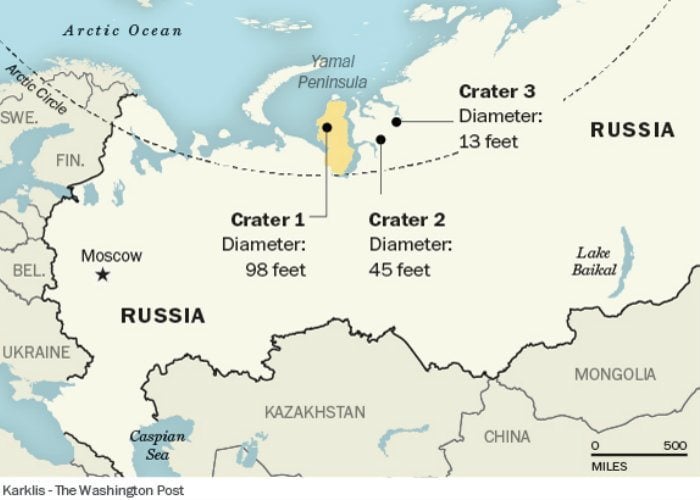 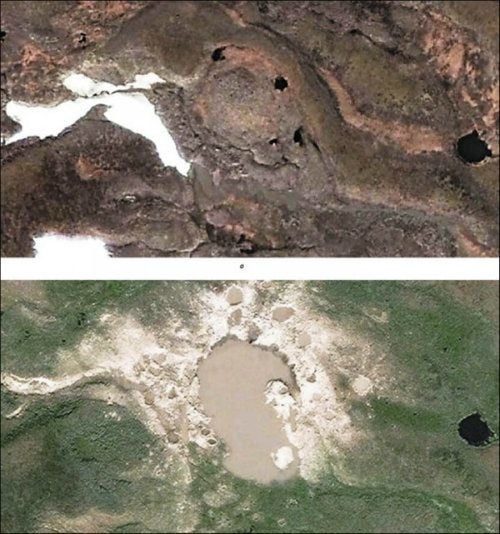 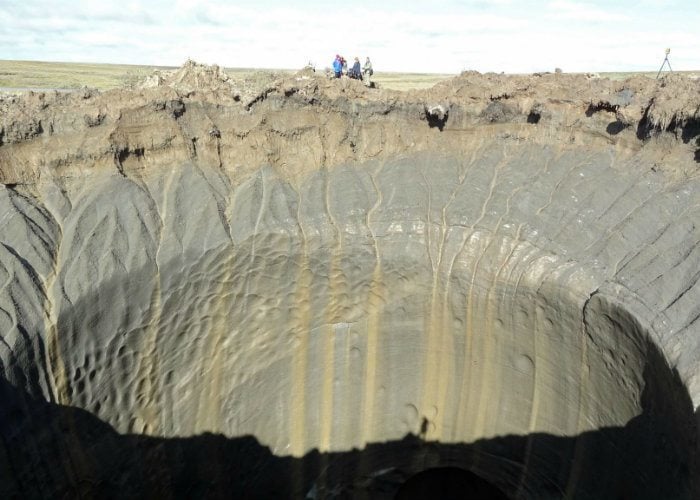 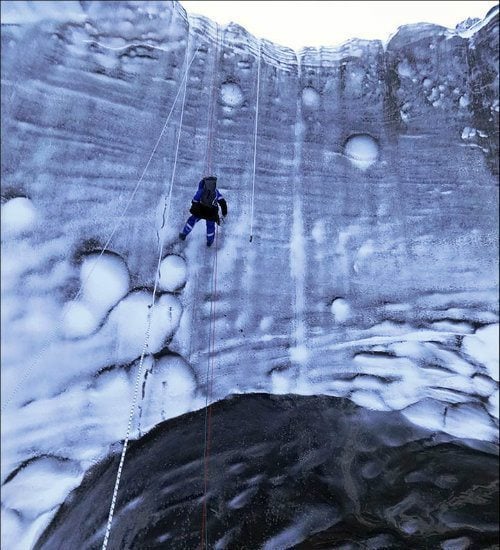 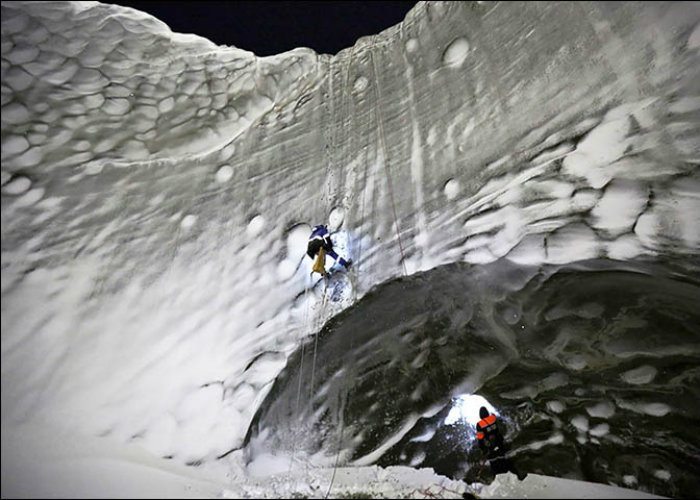 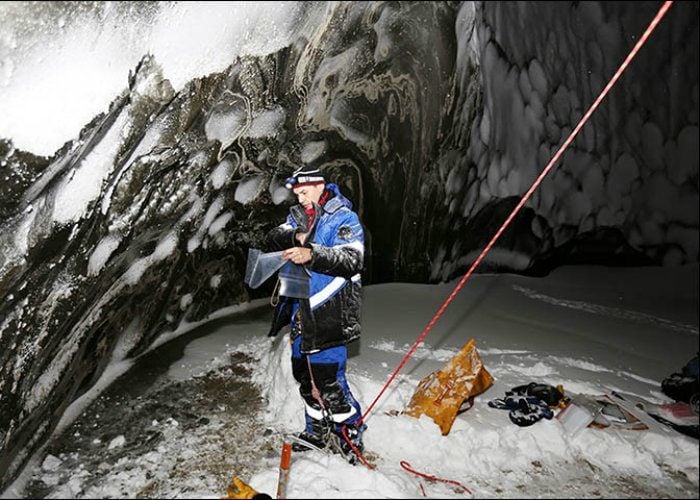 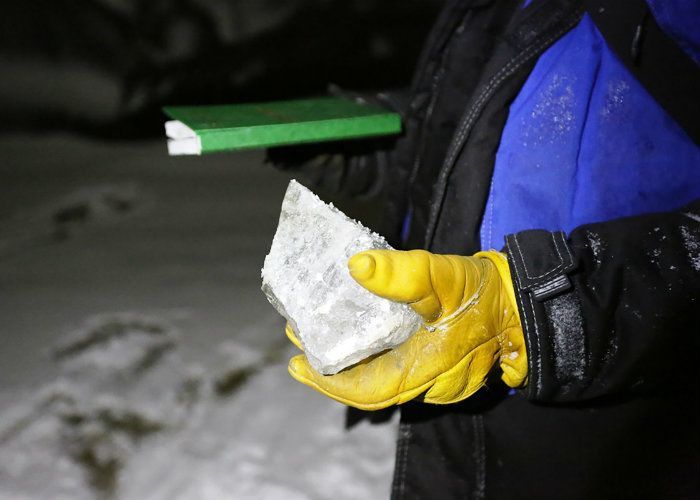 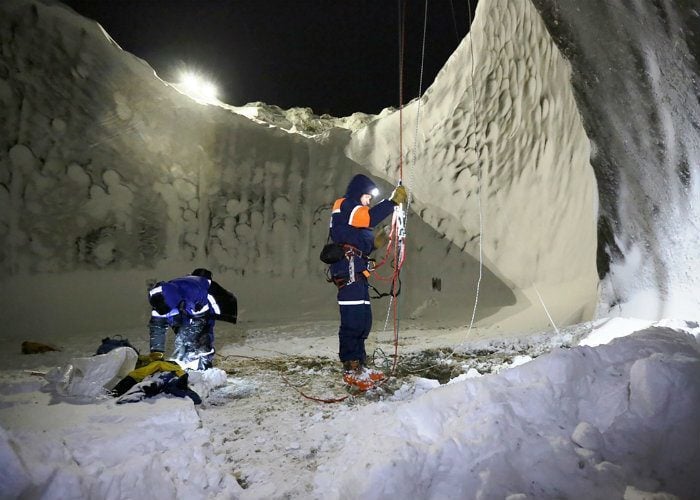 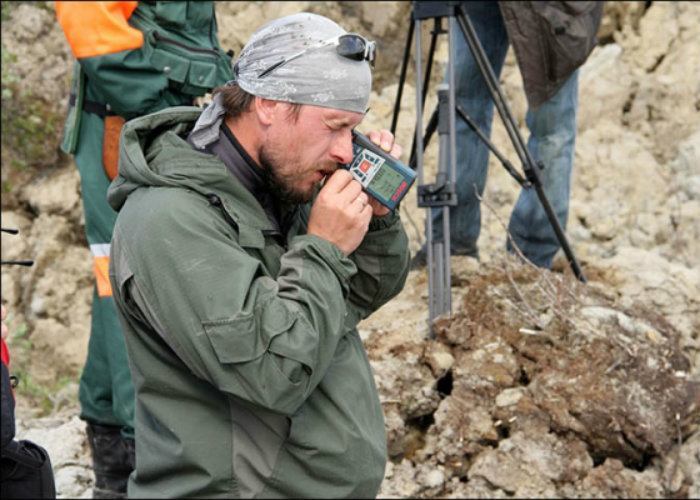 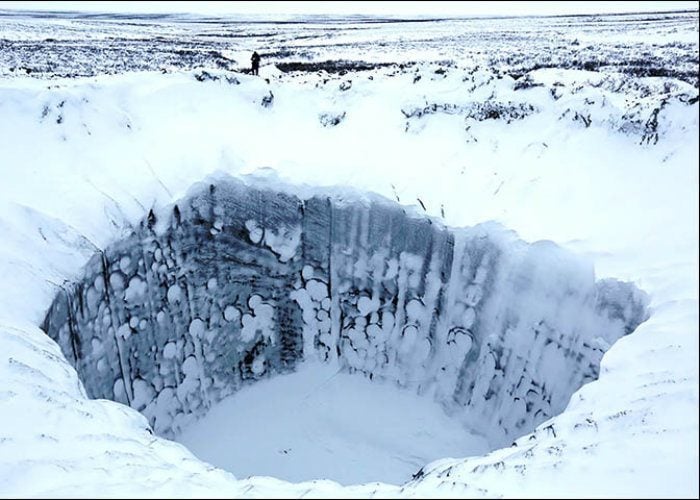 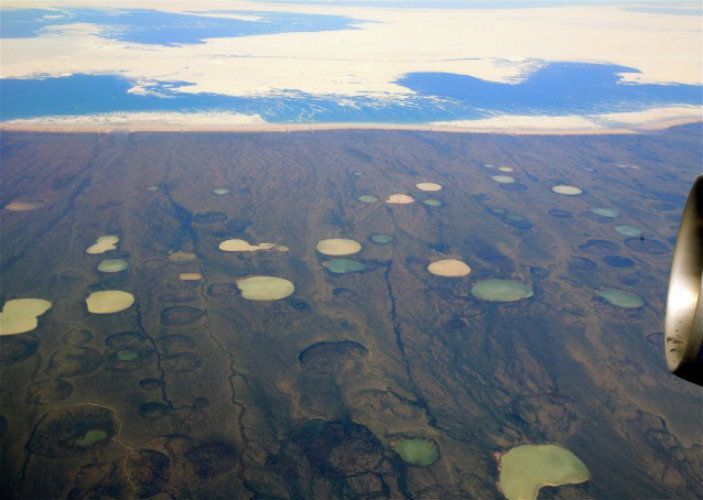 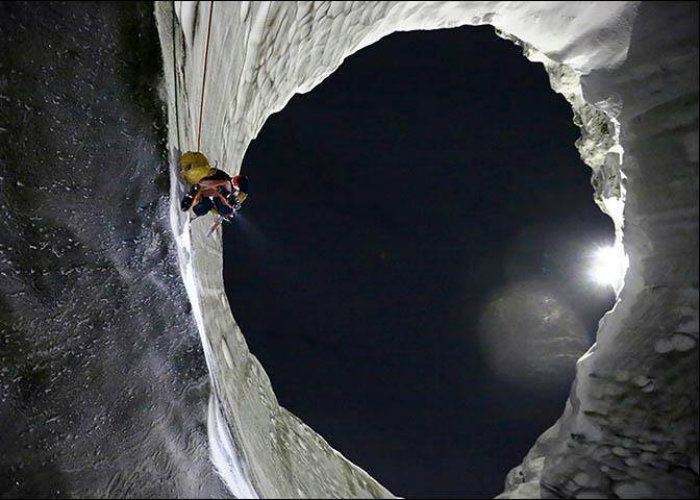 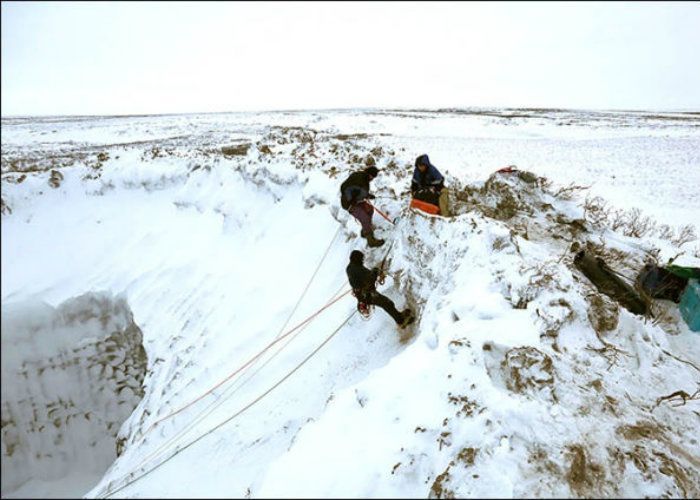 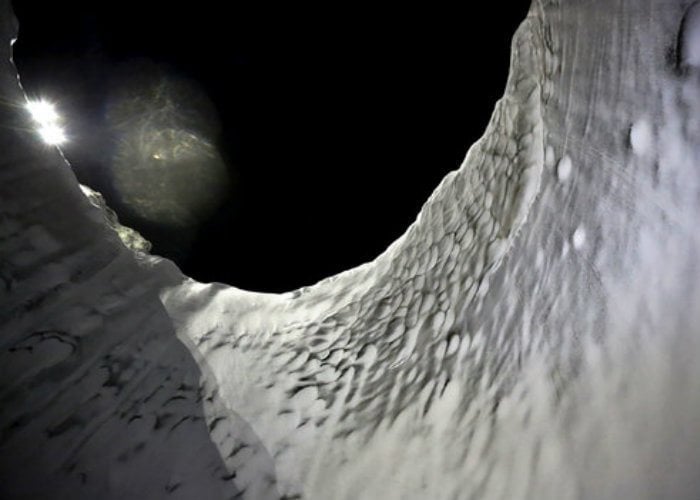 1 of 20
A helicopter fly by aided in the discovery of the first crater. Source: The Telegraph
2 of 20
A close-up of crater B1's rock layers. Source: The Telegraph
3 of 20
The original crater lies 30 kilometers from Bovanenkovo, Yamal’s largest gas field. Source: The Telegraph
4 of 20
Local residents captured this photo of B3 (the third crater discovered) while herding reindeer. Source: Siberian Times
5 of 20
The fourth crater is called B4 and is near the village of Nosok, close to the Taimyr Peninsula. Source: Siberian Times
6 of 20
The first crater discoveries. Source: The Washington Post
7 of 20
After pingos collapse, the remaining craters often become lakes or ponds. Source: Siberian Times
8 of 20
Researchers believe that the original crater formed two to three years ago. Source: The Guardian
9 of 20
A Russian expedition descended into the mouth of madness in November 2014. Source: io9
10 of 20
The team rappelled 50 feet down to find a frozen base. Source: io9
11 of 20
The data collected by the scientists would help determine the cause of this natural phenomenon. Source: io9
12 of 20
B1 is the largest of the known mystery holes in Siberia. Source: The Huffington Post
13 of 20
The northern Siberian region is the warmest it has been in 120,000 years. Researchers had to wait for B1 to freeze over so they could safely explore the pit. Source: The Huffington Post
14 of 20
Researchers discovered a lake at the bottom of B1 that is estimated to be 230 feet deep. Source: Nature World News
15 of 20
It’s interesting to note that B1 lies at the intersection of two tectonic faults. Climate change is often linked to increased earthquake activity, though this doesn’t seem to be the cause of the craters. Source: io9
16 of 20
Craters fill with water and often become lakes. Source: Think Progress
17 of 20
Pingos are a periglacial landform, meaning they form on the margin of past glaciers. Source: NBC News
18 of 20
In Siberia, pingos are known as bulgunniakh. Source: NBC News
19 of 20
The Yamal peninsula has seen a significant decrease in its permafrost in recent years. Source: Huffington Post
20 of 20