As far as researchers can tell, this is the first time a skinless and toothless shark was found surviving in the wild. 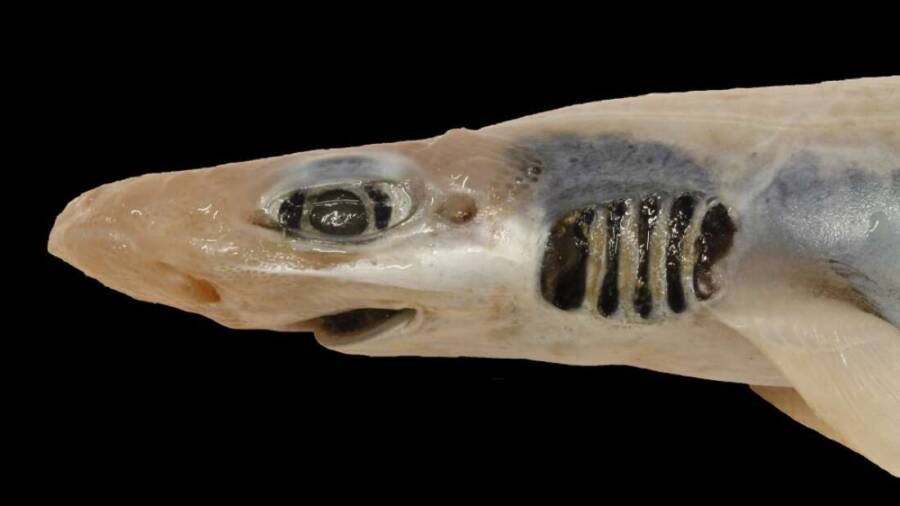 University of CagliariAbnormalities like these are typically fatal, making this specimen all the more remarkable.

A crew of marine researchers trawling the waters of the Sea of Sardinia were shocked to discover a skinless and toothless catshark. Incredibly, the specimen appeared to be in good health despite its profound abnormalities — which have never been found in a free-swimming animal before.

An Italian research team from the University of Cagliari pulled the female blackmouth catshark from a depth of 1,640 feet off of Cape Carbonara in South Sardinia, where the bizarre specimen had managed to adapt to its environment.

Indeed, not even a lack of teeth seemed to have affected the specimen, as 14 creatures were found inside its stomach. Even though the catshark’s teeth had been reduced to nearly nothing, the team guesses that it likely just swallowed its prey whole.

Scientists posit that both climate change and pollution might be to blame for the shark’s condition and believe that it likely had to navigate through chemically-contaminated areas of the Mediterranean or was affected by ocean acidification. It’s also quite possible, however, that the shark experienced a natural error during its embryonic development, resulting in its deformities. 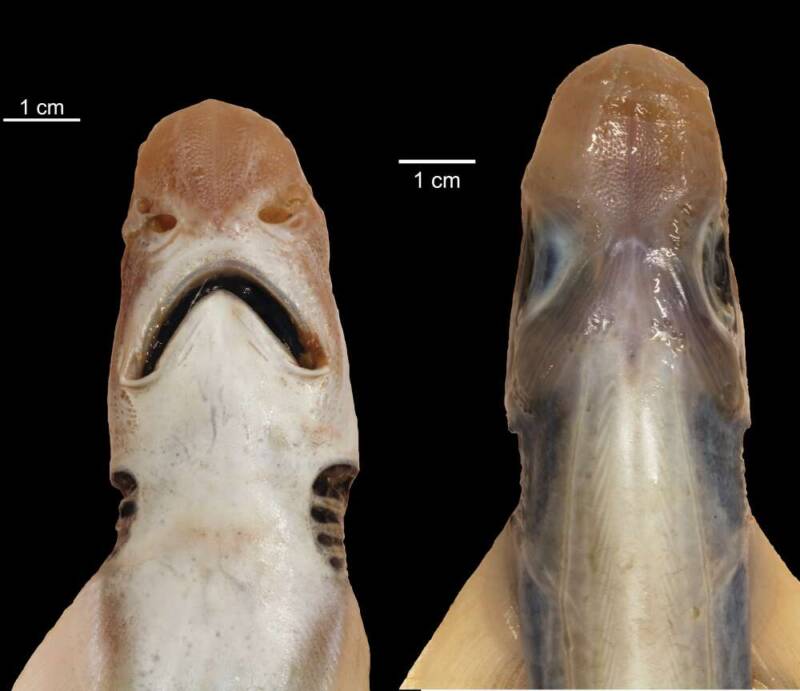 University of CagliariBlackmouth catsharks are typically ornate in color and design, but the only pigment found on this particular shark was in its eyes, abdomen, and gills.

According to IFL Science, the discovery was just recently published in the Journal of Fish Biology, but the female catshark was initially caught in July 2019.

The researchers opened their paper by claiming that “as far as is known, in this paper the first case of lacking of skin-related structures (epidermis, stratum laxum, dermal denticles and teeth) in a free-swimming elasmobranch… is reported.”

This blackmouth catshark, or Galeus melastomus, had none of the structures associated with elasmobranchs, the biological group that contains sharks.

Elasmobranchs rely on their skin for both mechanical and chemical defense systems. Shark skin is comprised of overlapping triangle-shaped structures known as denticles that serve as a strong barrier against predators or even other sharks, with whom they may be fighting for territory.

Equally as essential to the shark is the chemical defenses their skin typically provides them. These sharks routinely secrete a mucus that contains antibacterial proteins, which helps them to ward off microbes or parasites. But this shark was missing its epidermis, or the outer layer of its skin; some of its dermis, an inner layer of the skin; and its dermal denticles, or scales.

Researchers think that the lack of skin may have slowed the shark down physically. But even though this protective biological layer was completely missing, the shark was still somehow able to survive. It was otherwise believed that such a condition would prove fatal to a shark. 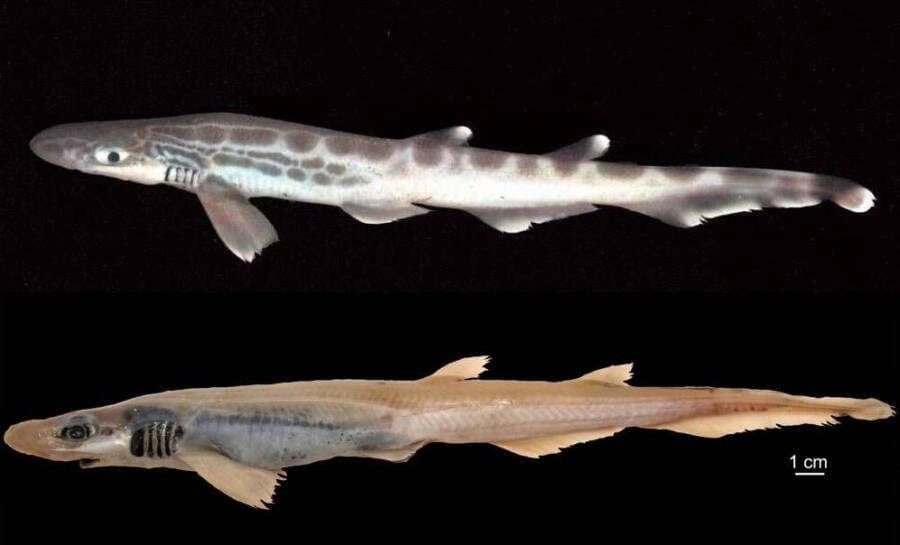 Wikimedia Commons/University of CagliariNone of the blackmouth catshark’s usual markings (top) were present in this specimen.

This particular specimen also didn’t even have pigment on its body, save for its eyes, abdomen, and gills. Blackmouth catsharks typically have ornate designs on their grayish-brown skin, including a dark black mouth. This specimen was largely yellowish in hue all around.

“It is unclear how the abnormality impacts the behavior, physiology or ecology of this individual,” the researchers said. More research is needed, however, to determine whether genetics, pollution, or climate change are responsible for the shark’s condition.

This wouldn’t be the first time that researchers have come across a sea creature deeply affected by the actions of humans. In 2017, researchers found a dead killer whale with the most toxic levels of pollution they had ever seen in an animal up to that point. Lulu the killer whale appeared on a beach in Scotland where researchers were horrified to find the largest concentration of polychlorinated biphenyls, or PCBs, in any animal on record.

“The levels of PCB contamination in Lulu were incredibly high, surprisingly so. They were 20 times higher than the safe level that we would expect for cetaceans to be able to manage,” Dr. Andrew Brownlow, head of the Scottish Marine Animal Stranding Scheme, told the BBC.

Pollution continues to torture the ocean’s creatures. Just this year, researchers learned that part of the reason sea turtles ingest plastics is because these materials smell like food.

There is hope in the case of this deformed shark, however. Despite its profound abnormalities, this female blackmouth catshark has managed to survive. Researchers asserted that it was imperative for them to keep studying these abnormalities, as in an ever-changing environment more data like this could help to protect the sea’s creatures from the actions of man.

After learning this skinless and toothless shark from the waters of Sardinia, read about these four new species of “walking sharks” found in Indonesia. Then, take a look at 29 fascinatingly weird animals from around the world.