After Emperor Nero allegedly kicked his second wife Sabina to death in 65 A.D., he met a slave boy named Sporus who looked like her. So Nero had him castrated and took him as his bride. 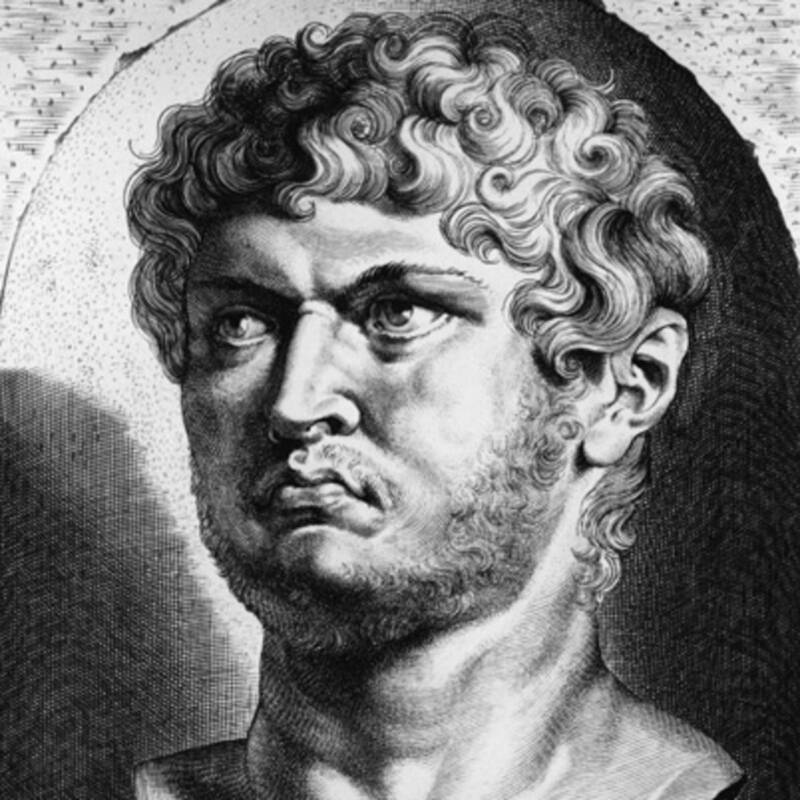 Wikimedia CommonsEmperor Nero took the young boy Sporus as his bride in 67 A.D.

Like a figure in classical myth — Narcissus, Ariadne, Hyacinth, Andromeda, or Persephone — Sporus’s life took a tragic turn in the hands of the powerful.

He was a beautiful Roman youth who caught the eye of the reigning emperor, Nero Claudius Caesar Augustus Germanicus. Unlike those figures of myth who endured a tragic fate, Sporus and his story, are very real.

Sporus was said to bear a powerful resemblance to the late empress, Poppaea Sabina. And so Emperor Nero, a self-proclaimed demigod, had the boy castrated and married him as a replacement for his lost love.

But Sporus’ life as empress of Rome was far less glamorous than it sounds, and he ultimately took his own life at the tragically young age of 20. This is the tragic story of a boy who became the empress of Rome. 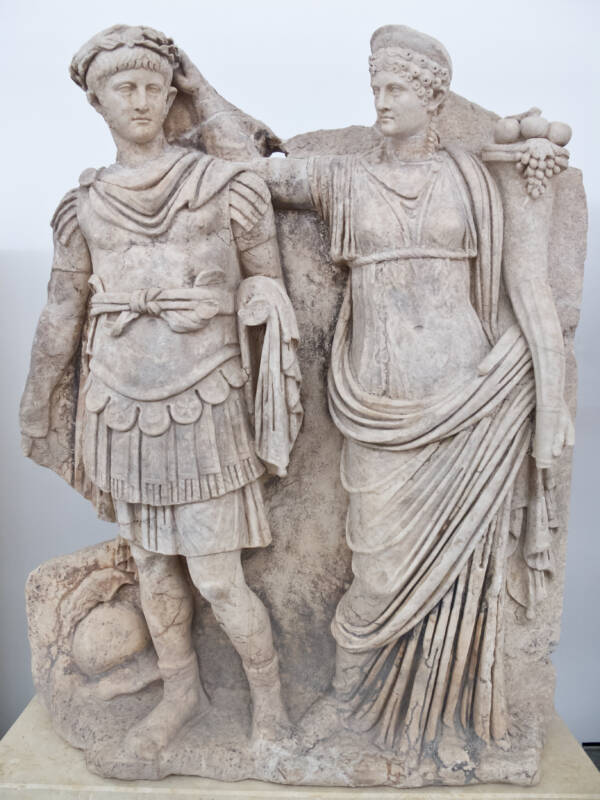 Carlos DelgadoNero was said to have had a sexual relationship with his mother Agrippina, who he later murdered.

Long before he set eyes on Sporus, the name Nero was synonymous with unrestrained power and unbridled perversion. His reputed taste for aberrant sexual behavior still echoes through the centuries. Ancient Roman historian Suetonius recorded:

This was a serious accusation: deflowering a Vestal Virgin was a severe taboo in Ancient Rome. Such an act would have ensured the priestess’s death by live burial if discovered. Equally, freeborn young men were not to be touched, and certainly not defiled.

Nero was said to have had incestuous relationships with his mother, the dominant Agrippina the Younger, with Suetonius recording:

“That he even desired illicit relations with his own mother, and was kept from it by her enemies, who feared that such a relationship might give the reckless and insolent woman too great influence, was notorious, especially after he added to his concubines a courtesan who was said to look very like Agrippina.”

But in 59 A.D., Nero murdered his mother. Historians believe the emperor committed matricide because Agrippina objected to his affair with Sabina, who Nero later married in 62 A.D.

Sabina’s death three years later remains somewhat mysterious. some sources state that she died due to complications from her pregnancy. Other rumors claim an enraged Nero kicked the pregnant empress to death.

Sporus’s Life As A Eunuch 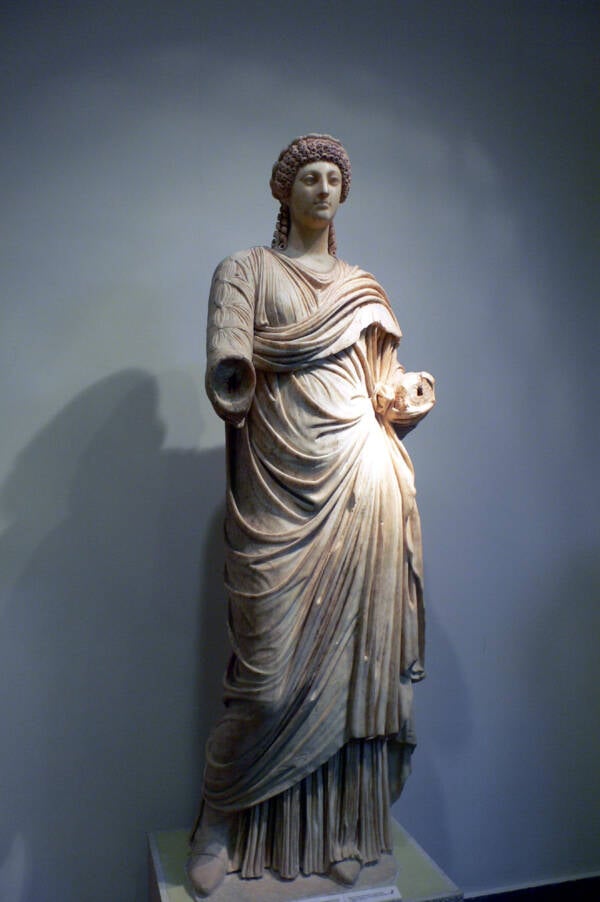 Nanosanchez/Archaeological Museum of Olympia A statue of Poppaea Sabina, who Nero was rumored to have kicked to death while pregnant.

Not much is known about Sporus’s early life, not even his true name.

“Sporus” comes from the Greek word for “seed” or “sowing.” The name is likely a cruel epithet bestowed by Nero, meant to mock Sporus’s inability to produce heirs. Nero is also said to have called the boy “Sabina.”

Even Sporus’s status is unclear. Some sources claim he was a slave boy, others a freedman. What is known is that Sporus was uncommonly attractive, sporting a lovely face very similar to Sabina’s.

According to Suetonius, Nero had Sporus castrated, afterward keeping the boy shrouded in a woman’s stola and veils, and announced to the world that his lover was now a woman. He even held a wedding ceremony in 67 A.D. and took the boy as his wife and new empress. 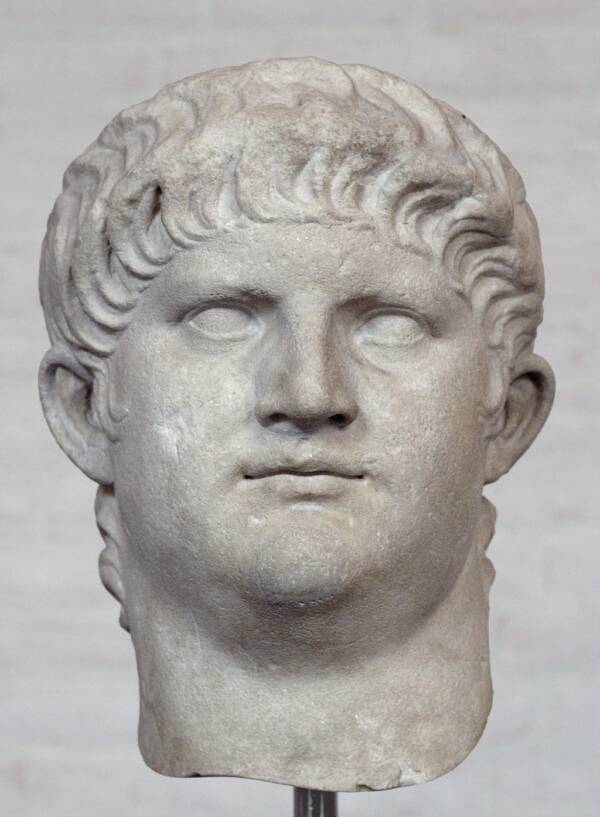 Bibi Saint-PolEmperor Nero of Ancient Rome was known for his sexual depravity.

“Sporus,” wrote Suetonius, “decked out with the finery of the empresses and riding in a litter, [Nero] took with him to the courts and marts of Greece, and later at Rome through the Street of the Images, fondly kissing him from time to time.”

Why did Nero insist on not only taking Sporus as a lover but also presenting him as a woman – was it simply lust? Or was it a symbolic defeat over a rival?

The mores surrounding homosexuality in ancient Rome were distinct from those found in much of the contemporary world. As Julius Caesar could attest, same-sex attraction was less about gender and more about position, in both the physical and societal sense of the word.

Socially, slaves were fair game: to bottom was to give away power, and that was unacceptable. And who you had sex with mattered only if you were both ranking members of Roman society. 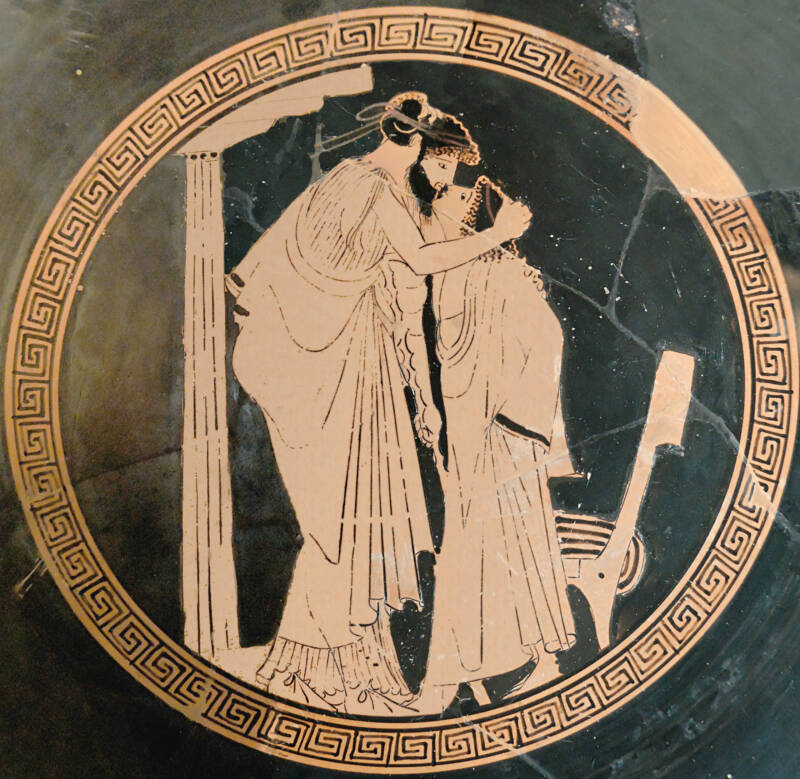 Wikimedia CommonsDepiction of two men kissing on a cup made circa 480 B.C.

On these fronts, Nero was in the clear. He was almost certainly Sporus’s dominant sexual partner, especially after the latter’s castration.

However, the union was likely considered an impudicitia, meaning unchastity or perversion according to Roman Homosexuality : Ideologies of Masculinity in Classical Antiquity by Craig A. Williams.

Sex was also a weapon in ancient Rome, as Steven DeKnight, series creator of Spartacus noted:

“It was pretty much accepted among the men. The difference was, it was about power. If you were of a certain position, you needed to be on top. It only worked one way. Also, the Romans would, when they conquered a people, it was very common for the men in the Roman legions to rape the other men that they had conquered. That was also a show of power and force.”

So, although Sporus was technically an empress, he had little more power than a slave.

While the position robbed Sporus of social power, eunuchs could be very influential in Rome and abroad. Without their own legacy or progeny, they were considered neutral actors, often put in positions of power or in female households, according to The Routledge History of the Renaissance by William Caferro. 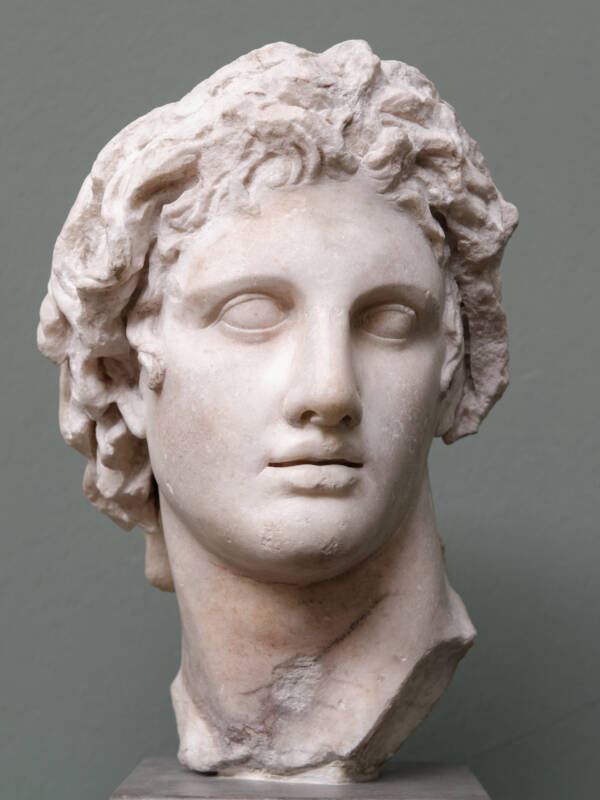 Some famous examples in the ancient world include Bagoas, Alexander the Great’s favorite, a Persian eunuch who became a trusted companion, and Pothinus, the advisor to Ptolemy VIII, Cleopatra’s brother/husband.

Some historians posit that Nero may not have even been enamored with Sporus, but that the boy was effectively neutered physically and socially to prevent any potential claims to the throne of Rome.

According to this theory, Sabina had convinced Nero that she was in fact illegitimately descended from Tiberius, a former emperor, giving her a strong imperial claim. If Sporus bore such a strong resemblance to the dead empress, it might signify that they were genetically related, giving Sporus a claim to imperial rule.

In such a case, castration would have been a simple way for Nero to neutralize his potential competitor. A sexually humiliated boy treated like a woman at the foot of the emperor would never be taken seriously as a rival for the throne. 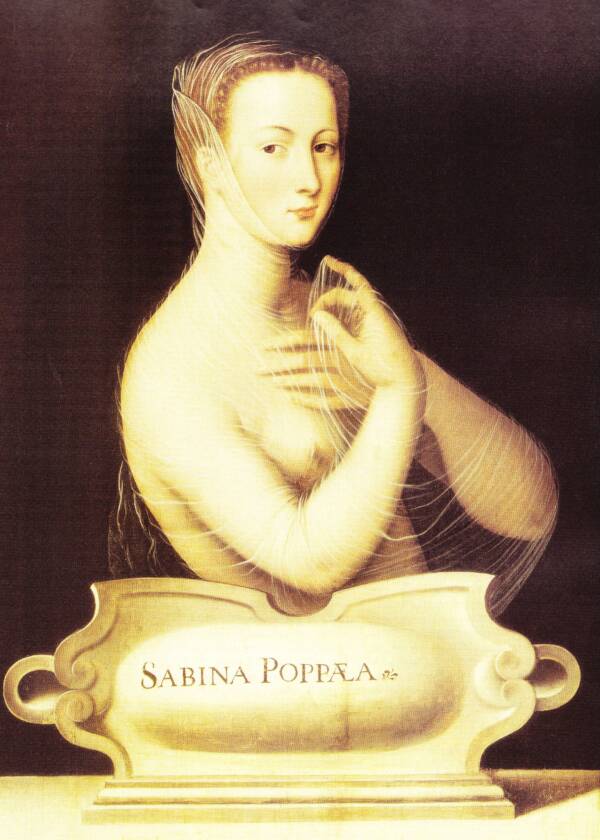 Brian Boulton/Wikimedia CommonsSporus was said to have the same face as Sabina.

On Jan. 1, 68 A.D., while Nero was taking auspices for the New Year, Sporus gifted the emperor a ring depicting the Rape of Persephone, the mythical girl who was kidnapped by Hades to become his bride. The image of an innocent taken into the underworld may have contained multiple meanings.

It could have reminded the emperor in symbol and stone that Sporus was at his side thanks to force, much like Persephone was with Hades. Gifting Nero such an item at the dawn of the new year would have been considered, at best, to be in poor taste, or at worst, a grave omen.

And as fate would have it, Nero would be dead well before the end of the year.

The Roman populace was generally dissatisfied with the leadership of Nero. He’s notoriously blamed for the Great Fire of 64 A.D., though that likely wasn’t the emperor’s doing. Eventually, Nero made a run for it to escape Rome, after being declared a public enemy by the Senate. Sporus accompanied him. 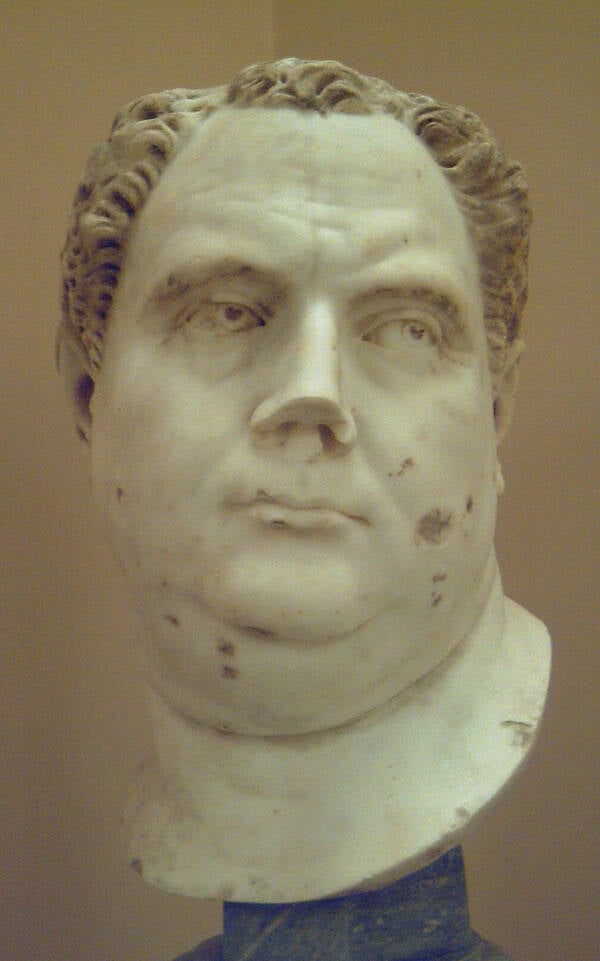 Luis García/Capitoline MuseumsRoman Emperor Vitellius wanted to humiliate Sporus in front of Rome when he sought to cast him as a young girl who is raped and forced to marry the god of the underworld.

Nero was informed by a courier that the senate planned to have him executed. Nero’s private secretary, Epaphroditus, under orders helped Nero drive a dagger through his own neck, as a means of escaping the anticipated public execution.

After Nero’s death, Sporus passed onto the Praetorian guard Nymphidius Sabinus, who kept Sporus in his role of ersatz wife, according to Nero by Edward Champlin. When this second husband figure died in a subsequent coup, Sporus went to Otho, Sabina’s first husband, whom she had divorced to marry Nero.

After becoming emperor in 69 A.D., Vitellius proposed that Sporus play the titular role in “The Rape of Proserpina,” a performance that would serve as part of a gladiatorial spectacle.

According to contemporary sources, Sporus chose to end his life rather than face the humiliation of playing for all of Rome the role he’d played for Nero, Sabinus, and Otho. 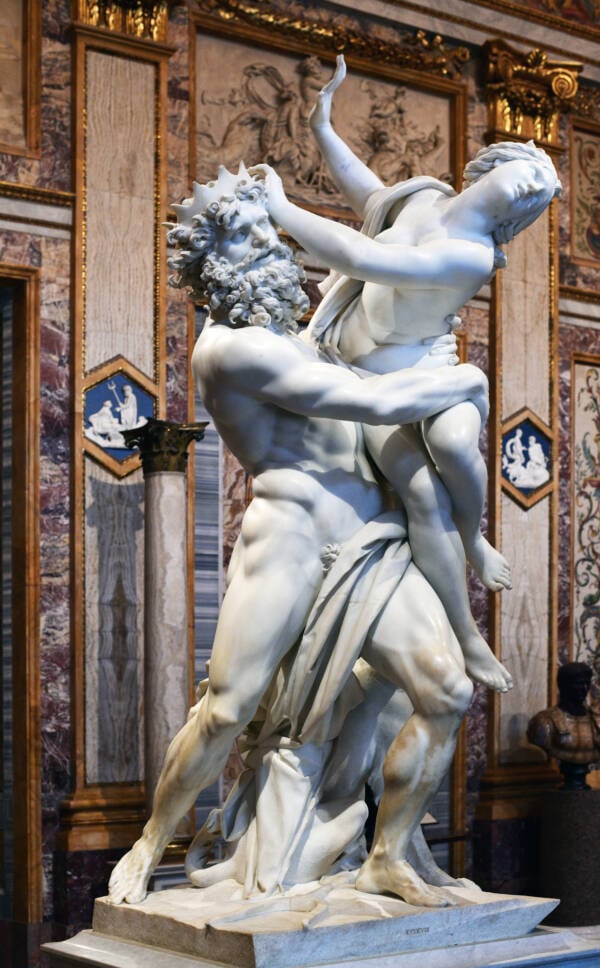 Wikimedia CommonsSporus committed suicide rather than reenact the Rape of Proserpina, depicted above.

The boy’s life ended, but his name has lived on as a synonym for eunuchs and derision, even making it into a line of poetry by Lord Byron in the verse: “Sporus, that mere white curd of ass’s milk? Satire or sense, alas! can Sporus feel? Who breaks a butterfly upon a wheel?”

Kidnapped, mutilated, sexually assaulted, and remembered forever for it — Sporus paid a high price for wearing the face of an empress.

For more insane tales of ancient Rome, read the story of Zenobia, the fierce warrior queen of the Palmyrene Empire. Then, find out why Rome was rife with graffitied penises.