Archaeologists Just Unearthed The 8,400-Year-Old Remains Of A Man And His Dog

The gravesite in southern Sweden is part of a mesolithic settlement that was once inhabited by a group of hunters. 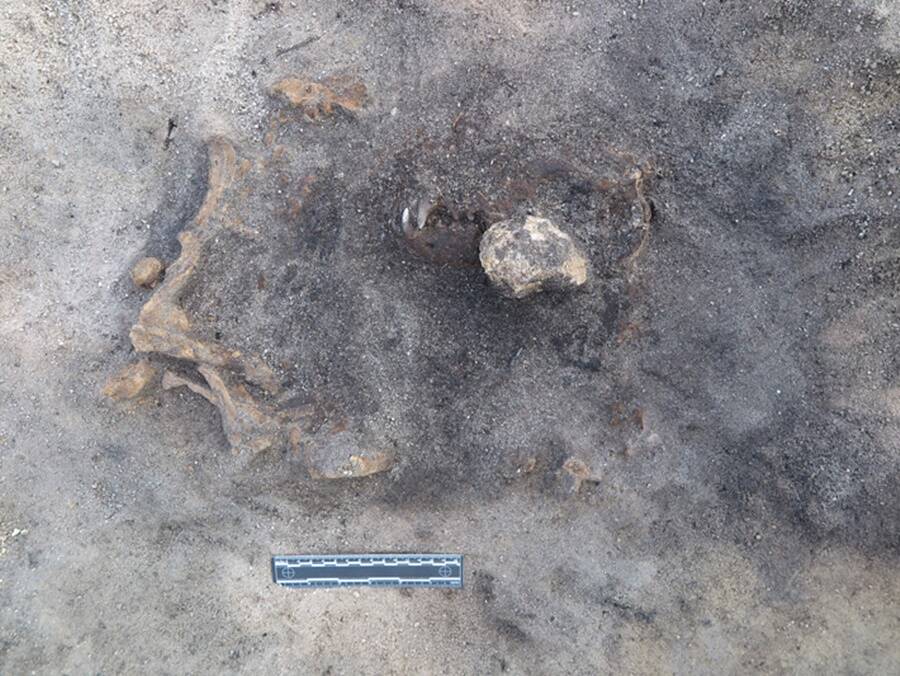 Carl Persson/Blekinge MuseumThe remains of a man and his dog were uncovered in a graveyard dating back to the Stone Age in modern-day Sweden.

They say a dog is a man’s best friend. This saying was evidently true even in the Stone Age when, about 8,400 years ago, a man was buried with his dog in a village’s graveyard.

According to ABC News, archaeologists uncovered the remains at a human burial site located near the town of Solvesborg in southern Sweden. One of the graves held the remains of a man and his dog which were preserved thanks to a flash flood that swept the area a long time ago.

“The dog is well preserved, and the fact that it is buried in the middle of the Stone Age settlement is unique,” osteologist Ola Magnell of Sweden’s Blekinge Museum. Researchers noted that families typically leave items that are considered valuable or sentimental with their deceased loved ones. In this case, the sentimental token may have been the man’s domesticated canine.

“A buried dog somehow shows how similar we are over the millennia when it comes to the feelings like grief and loss,” said Carl Persson, the museum’s project manager. He went on to say that such findings during excavations “makes you feel even closer to the people who lived here.”

Work at the Swedish site, one of the largest archaeological digging sites to exist in the region, involved digging out layers of sand and mud that built up after a flood. Experts suspect the site was once a settlement of hunters during the Stone Age. Now, researchers are working to excavate the canine remains so they can be taken to the museum for further study. 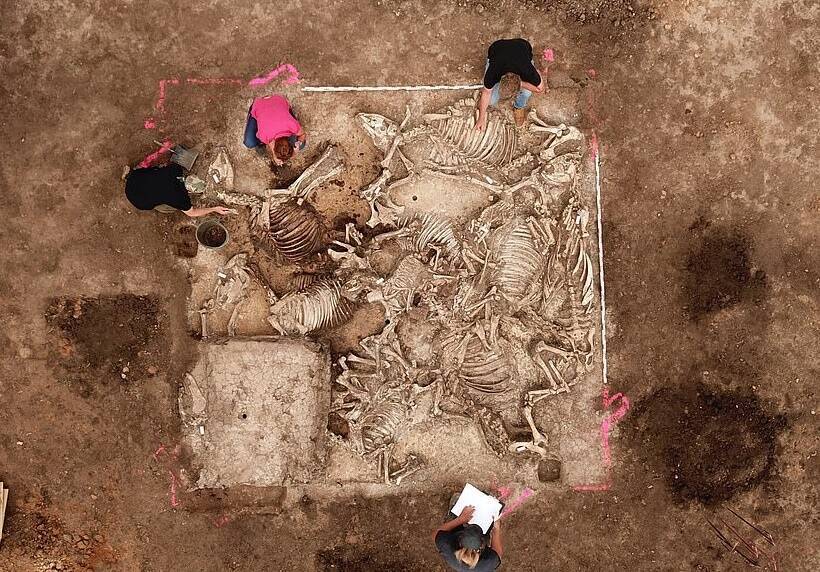 Uwe Kahn/BILD
This aerial picture shows the remains of 11 animals buried inside a tomb uncovered in modern Germany.

An animal osteologist who examined the dog’s bones said it wasn’t exactly like any modern breeds but was comparable to “a powerful greyhound.”

The tradition of being buried with items from the deceased person’s life has been found in various cultures dating back thousands of years. Archaeologists and anthropologists call these items “grave goods.”

Viking warriors, both men and women, were commonly buried with a plethora of weapons to denote their warrior status. Members of Japanese nobility during the Edo period were buried with mounds of valuables like gold coins and religious artifacts, symbolizing the wealthy pedigree of their families.

In some ancient cultures, customs dictated the deceased be buried with animal sacrifices to guide their spirit or offer appeasement to the gods for safe passage to the afterlife. 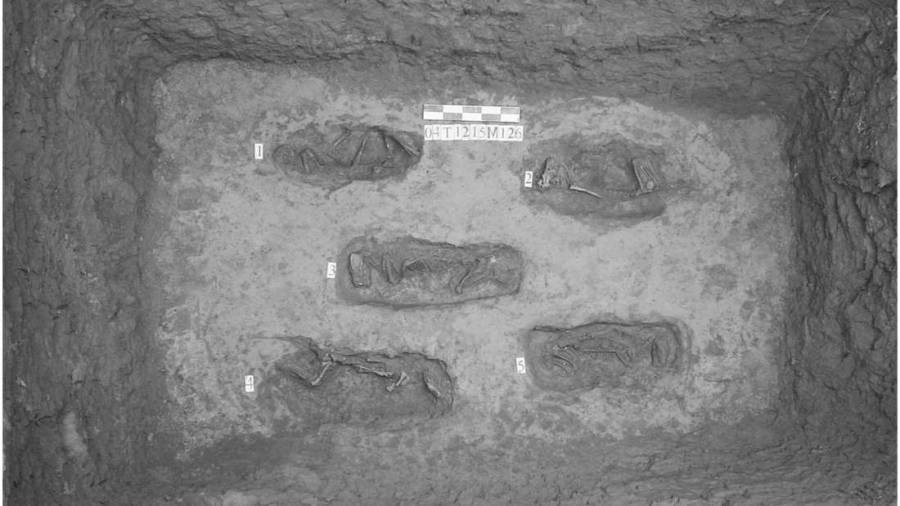 Researchers still need to do further analysis of the dog remains found in the gravesite in Sweden. Although the more common explanation behind such burials has been for sacrificial rites, researchers seem to suspect, at least in this case, it may have been done simply for sentimental purposes.

Dogs in particular have held a fascinating role in human traditions. A study published in April 2020 revealed analysis on the remains of a 2,000-year-old tiny dog that was uncovered in Córdoba, Spain. The study revealed that the breed of dog that was buried was physiologically similar to the modern small dog breeds today, like chihuahuas.

Judging by the markings on the tiny dog’s bones, the dog was likely deliberately killed and sacrificed for the burial of a Roman family member. Dogs were previously thought to be primarily used for practical purposes like hunting and guarding within the Roman Empire but canine sacrifice appears to have been a common practice in Greek and Roman rites.

Although the tradition of being buried alongside personal belongings or valuable jewelry may not be the predominant custom anymore, the concept of burying a loved one with a sentimental token, whether it’s a photo locket or perhaps a ring, is still practiced by some individuals.

But burying your loved one with their pet seems to have, thankfully, largely gone out of style.

Next, take a look at how scientists reconstructed the mutilated face of a 1,000-year-old female Viking warrior and learn about the remains of the warrior women who may have inspired the legend of Mulan found in Mongolia.