Sword Beach: The Allies’ First Step In Stopping Hitler During The Normandy Invasion

On June 6, 1944, now known as D-Day, the Allied forces landed on Sword Beach as a part of their invasion of Normandy — and nearly all but won it in two hours.

“This vast operation is undoubtedly the most complicated and difficult that has ever taken place,” said Sir Winston Churchill of the June 6, 1944, D-Day invasion by the Allied powers on the shores of Normandy. Five sections of the Normandy shoreline were chosen for the invasion and codenamed: Gold, Sword Beach, Omaha, Utah, and Juno.

Taking control of Sword Beach was crucial in protecting the eastern flank from the possibility of a German armored counterattack. The Allies’ subsequent victory at Sword Beach spelled the beginning of their triumph over Nazi Germany in all of Europe and the Western Front in less than a year.

Codenamed Operation Neptune or Operation Overlord, the invasion of Normandy, now known as D-Day, was the most massive amphibious invasion in history — and perhaps the most significant turning point for the Allies during World War II as their victory there laid the foundation for the Nazis’ defeat. 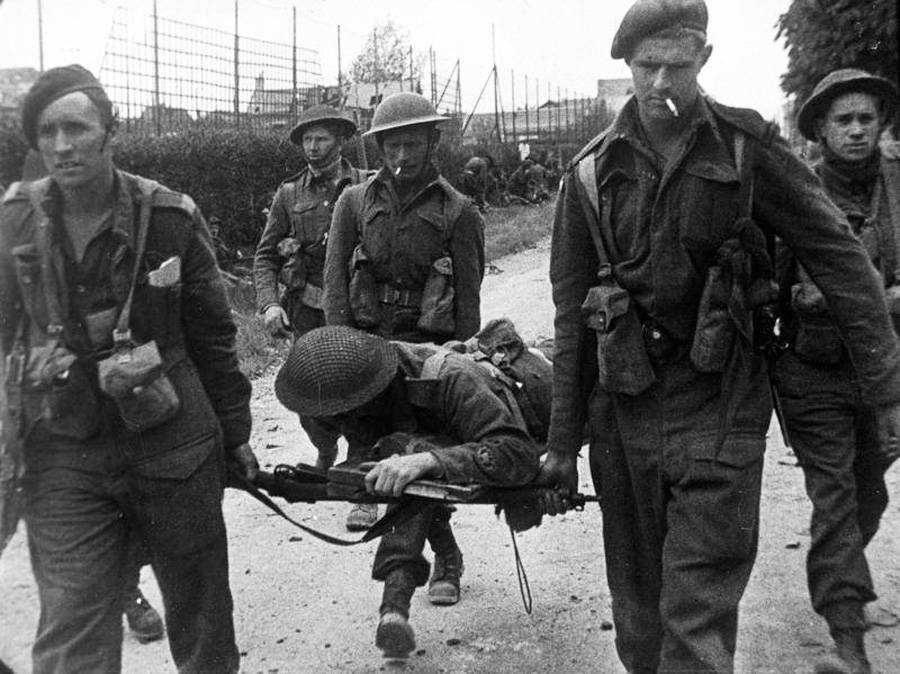 Author and historian Giles Milton spoke about the magnitude of the invasion during a 2018 BBC podcast. “The statistics are massive. You can’t begin to get your head around them,” he began. “Seven thousand big ships were involved; 12,000 planes were involved, and on D-Day itself, 156,000 men were due to be landed on those beaches… Nothing like this had ever been attempted before in the history of warfare.”

This is the way it was, up close on June 5, 1944, as the greatest invasive force in military history left the south coast of England, bound for the coast of France.

The British led the attacks at sections of the shoreline codenamed Gold Beach, the Americans at Omaha Beach and Utah Beach, and the Canadians at Juno. Allied troops landing on Sword Beach, the easternmost point of the attacks, were also the responsibility of the British Army along with elements from the Polish, Norwegian and other Allied naval forces.

“Nobody dashed ashore. We staggered,” Cpl. Peter Masters, a survivor of the Battle of Sword Beach, recalled. “With one hand I carried my gun, finger on the trigger; with the other, I held onto the rope-rail down the ramp, and with the third hand I carried my bicycle.”

Ordered by his superiors to “get off the beach,” Masters did his best to comply. On the way off the beach, he noticed a couple of soldiers digging a foxhole in the water. “I could never figure out why they were doing that. Being a beginner, I did not know enough to be really frightened.” 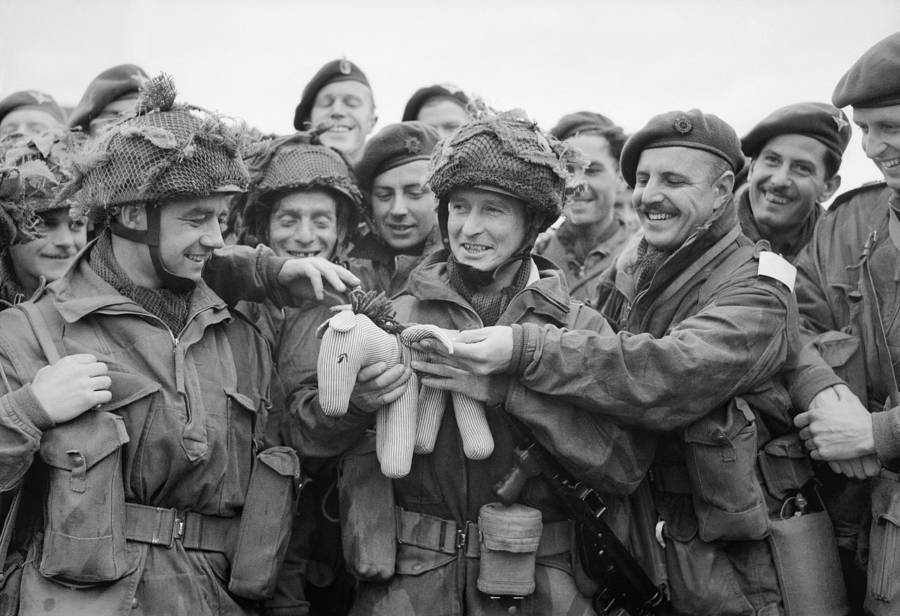 Securing Sword Beach was especially instrumental in the Allies’ victory as it was the closest front to the city of Caen, through which the main roadways in the region ran. The Allies had four objectives here:

In short, the Allies needed to take control of the city of Caen while warding off the Germans in order to advance inland and then fan out to the east and west with the ultimate goal of retaking Paris — and then all of France.

A Big Victory At Little Cost 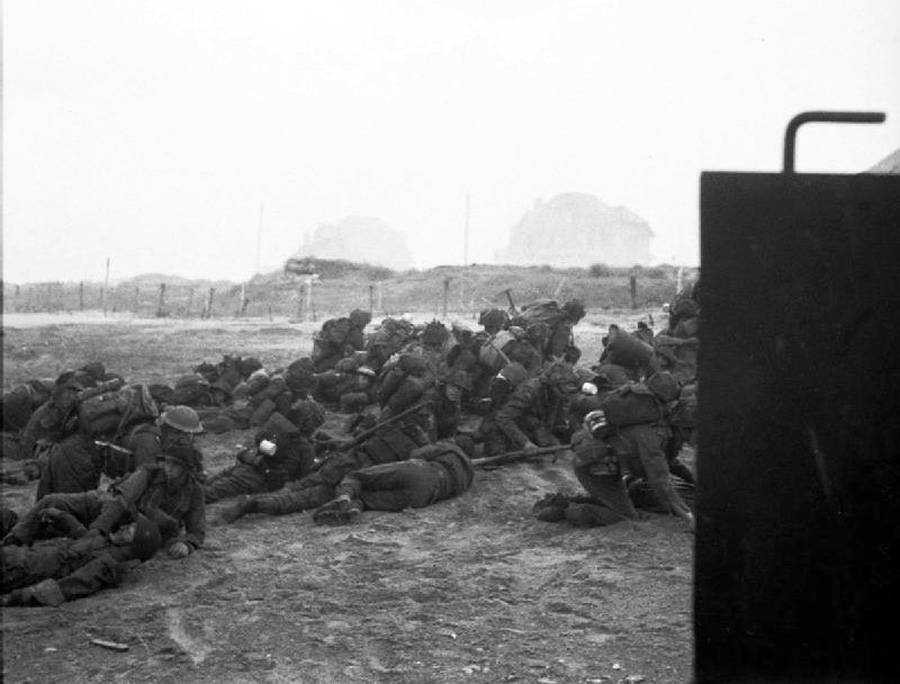 Wikimedia CommonsInfantry of the British 2nd Army Division wait to move off Sword Beach while under enemy fire on the morning of June 6, 1944.

Units of the British 2nd Army along with French commandos first landed on Sword Beach at 7:25 a.m. led by Lt. Gen. Miles Dempsey. Additionally, they were supported by paratroopers who landed in zones located a short distance inland from the beach.

German defenses were much lighter at Sword Beach than at other landing sectors such as Omaha Beach and by 8:00 a.m., most of the fighting on the beach was concluded. At about 9:30 a.m., two squadrons of Royal Engineers had cleared seven of the eight intended exit lanes from Sword Beach.

Archive video footage of the D-Day landings at Normandy on June 6, 1944.

It was from Sword Beach that British commandos under Simon Fraser, Lord Lovat, found fame. His men were given the task of moving swiftly off the beach and joining up with the paratroopers who had landed inland. They experienced strong German resistance outside the nearby town of Ouistreham but eventually overcame. By 1:00 p.m., the British and French commandos had linked up with the paratroopers and were en route further inland to take the city of Caen. The city of Caen, however, would not be successfully taken in its entirety until mid-July. By then, the city was entirely destroyed.

The troops moving inland were briefly halted by the only German counterattack of the day which they successfully thwarted. By the end of the day, about 29,000 men had landed at Sword Beach, the beach itself had been secured, and allied forces had advanced about four miles inland. The British saw only around 680 fatalities. 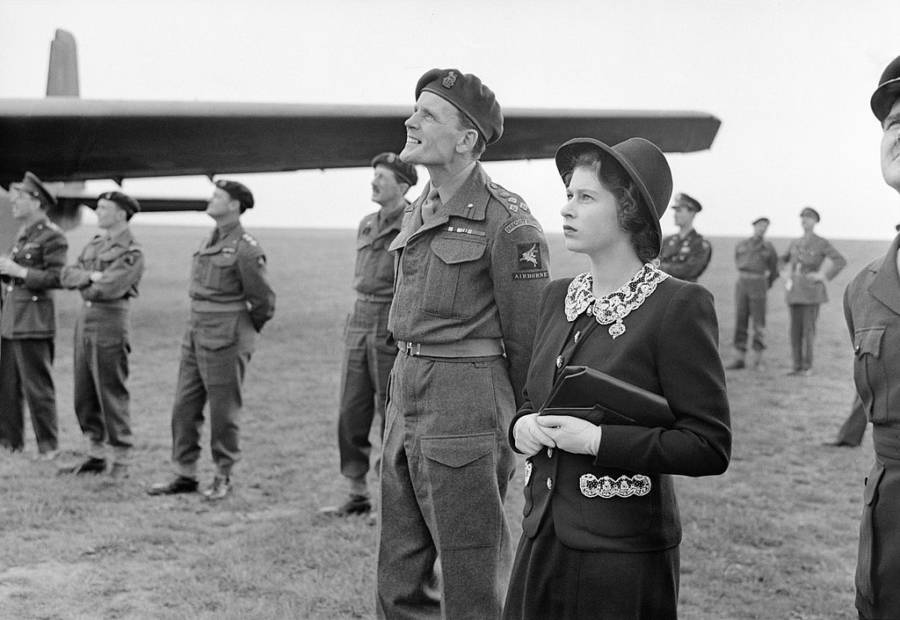 Wikimedia CommonsHRH Princess Elizabeth watching parachutists dropping during a visit to airborne forces in England in the run-up to D-Day. May 1944.

The most commonly reported total of casualties for Sword Beach include about 1,000 dead among the soldiers who landed there, with an additional 600 British airborne soldiers killed or wounded, and 600 more who were listed as missing.

“Four years ago our nation and empire stood alone against an overwhelming enemy with our backs to the wall, tested as never before in our history, and we survived that test.”

Compared with German casualties there, these numbers from the successful battle at Sword Beach were cause for celebration.

Want to learn more about World War II? Check out the story of Matthäus Hetzenauer: the deadliest Nazi sniper of World War II. Then, discover The Night Witches: the all-female World War II squadron that terrified the Nazis.