‘The Radical Inside The System’: The Story Of Chicago Seven Activist-Turned-Senator Tom Hayden

An iconic leader of the 1960s counterculture, Tom Hayden went from protesting the American political system to working within it.

Tom Hayden devoted his life to progressive ideals that the American establishment deemed radical in the 1960s. As a founder of the Students for a Democratic Society (SDS), he mobilized thousands of young people to speak up against the Vietnam War and demand civil rights for all.

Unsurprisingly, Hayden quickly became a counterculture icon — and he also got into a lot of trouble. As part of the Chicago Seven, he was charged with conspiracy to incite a riot while crossing state lines at the 1968 Democratic National Convention. But despite the tumultuous trial that followed, Hayden symbolized courage in the face of pressure from the government. 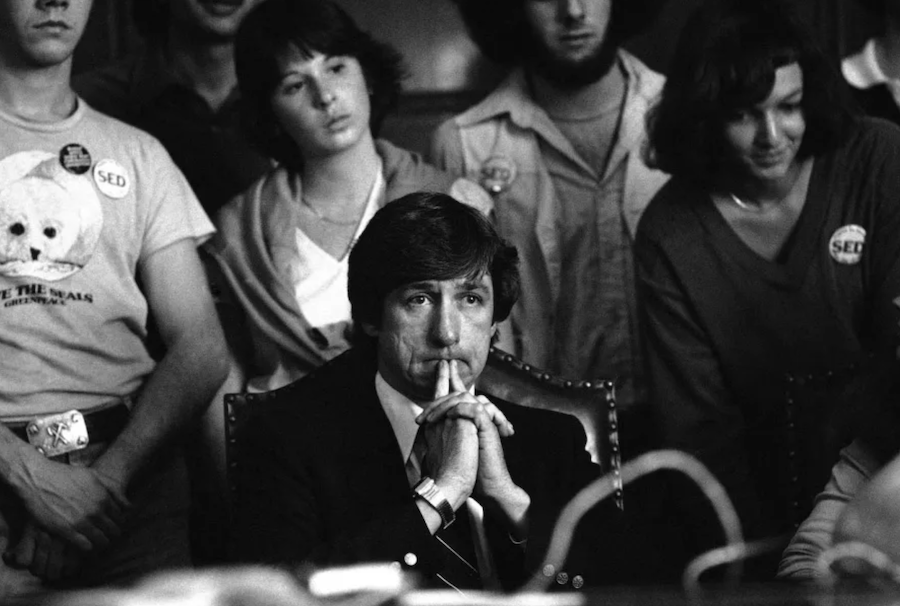 While Aaron Sorkin’s upcoming Netflix movie The Trial of the Chicago 7 hopes to deliver a breathtaking courtroom drama, the true story of the Chicago Seven and its role in Tom Hayden’s life is even more inspiring.

Born Thomas Emmett Hayden on December 11, 1939, in Royal Oak, Michigan, Tom Hayden had a turbulent childhood. Though he was raised middle-class, his father was a violent drunk who divorced his wife when Tom was 10. 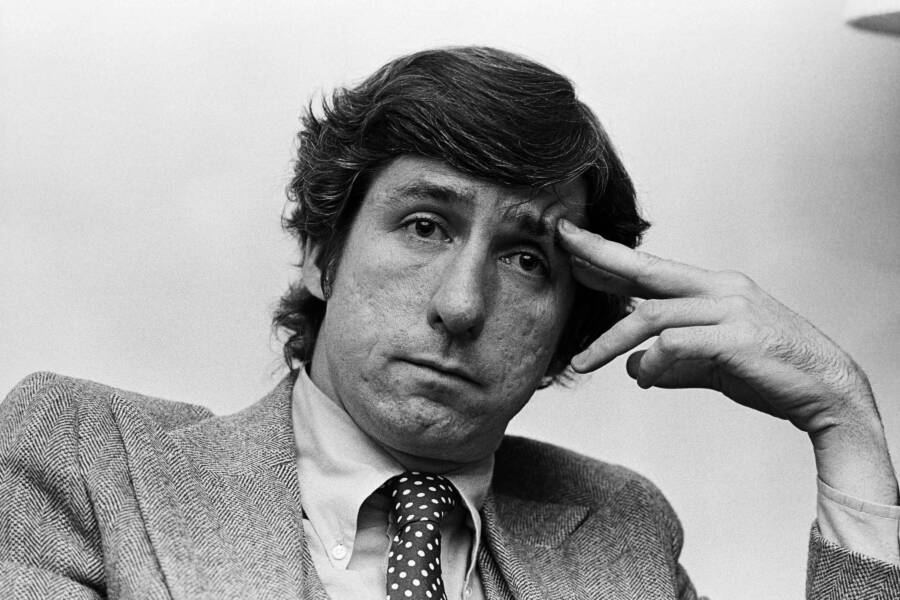 Hayden was known for being a passionate writer in his teens — as well as a very mischievous one. As the editor of his high school paper, he used his farewell column to write, “Go to hell,” by using the first letter of each successive paragraph to do so. It almost cost him his diploma.

Prohibited from attending his own 1957 graduation, Hayden simply picked up his diploma and left high school behind, ready for college. And it was at the University of Michigan where he truly found his purpose. By the time he was a senior, he was an editor of the college paper — and he had what he called a “summer of transformation.”

Firmly politically engaged by 1960, Tom Hayden managed to snag an interview with Dr. Martin Luther King Jr. amidst the masses outside the Democratic National Convention in Los Angeles. King’s words of wisdom would stay with Hayden forever, as he recalled in his memoir, Reunion.

King advised Hayden, “Ultimately, you have to take a stand with your life.” Hayden later wrote, “As I left the line, and later as I left Los Angeles, I asked myself why I should be only observing and chronicling this movement instead of participating in it.” 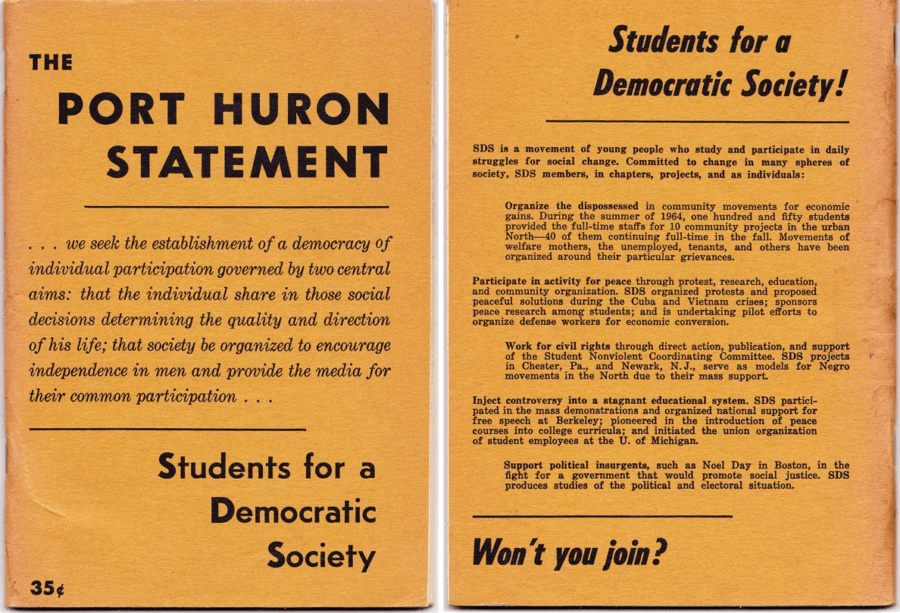 Students for a Democratic SocietyThe manifesto sold for 25 cents apiece with 60,000 copies distributed.

Upon graduating in 1961, SDS founder Al Haber offered Tom Hayden a position as a field secretary in the South. With the civil rights movement in full swing, Hayden accepted the offer and joined the Freedom Riders in Atlanta.

Of course, being a Freedom Rider wasn’t easy. Hayden was often beaten by segregationists and thrown in jail. But with strong ideals and experience with activism under his belt, the 22-year-old drafted the Port Huron Statement — a call for a cultural revolution.

This 64-page manifesto called for “participatory democracy,” through which his generation could truly have a voice. It called for equal opportunity for all — and denounced the hypocrisies in the political system.

The opening lines read, “We are people of this generation, bred in at least modest comfort, housed now in universities, looking uncomfortably to the world we inherit.”

Eventually, 60,000 copies of the statement were distributed for 25 cents apiece. Hayden even personally delivered one to the Kennedy White House.

The Rise Of The Chicago Seven 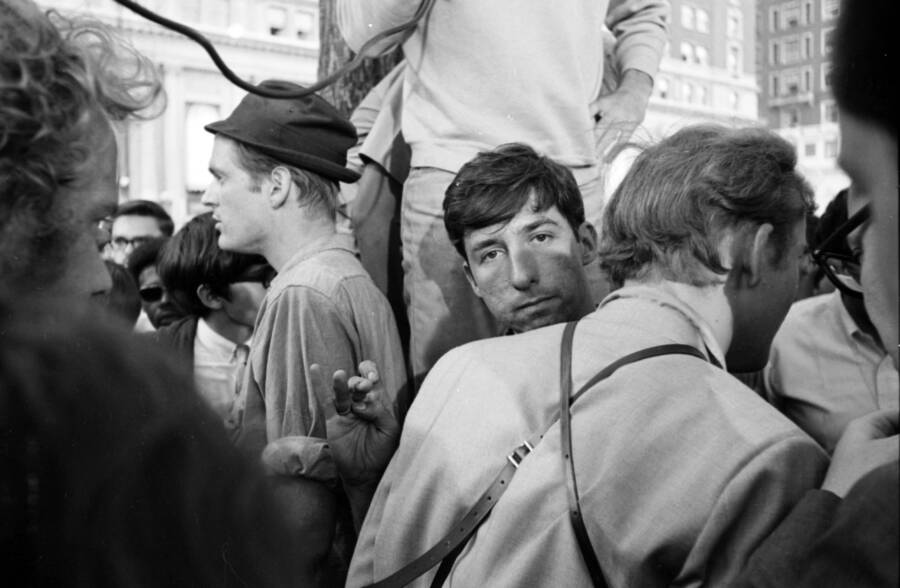 Michael Ochs Archives/Getty ImagesTom Hayden in the thick of protests during the Democratic National Convention in August 1968.

As the SDS became an influential entity of the New Left movement, Tom Hayden became one of the most prominent spokesmen of his generation. And as the Vietnam War escalated in 1963, so did Hayden’s efforts to stop it.

Hayden ignored the State Department’s travel prohibitions in order to witness Vietnam’s destruction firsthand, becoming one of the first Americans to visit wartime Hanoi in 1965. It would be the first of many trips he’d take to the country in the following years.

He visited as soon as 1967, when North Vietnamese leaders asked him to bring three prisoners of war back to the United States. Although Hayden’s visits to Vietnam remained controversial, the State Department did thank him for this humanitarian action.

With the 1968 Democratic National Convention looming ahead and with ending the war being his top priority, Hayden headed to Chicago — and walked straight into American history. 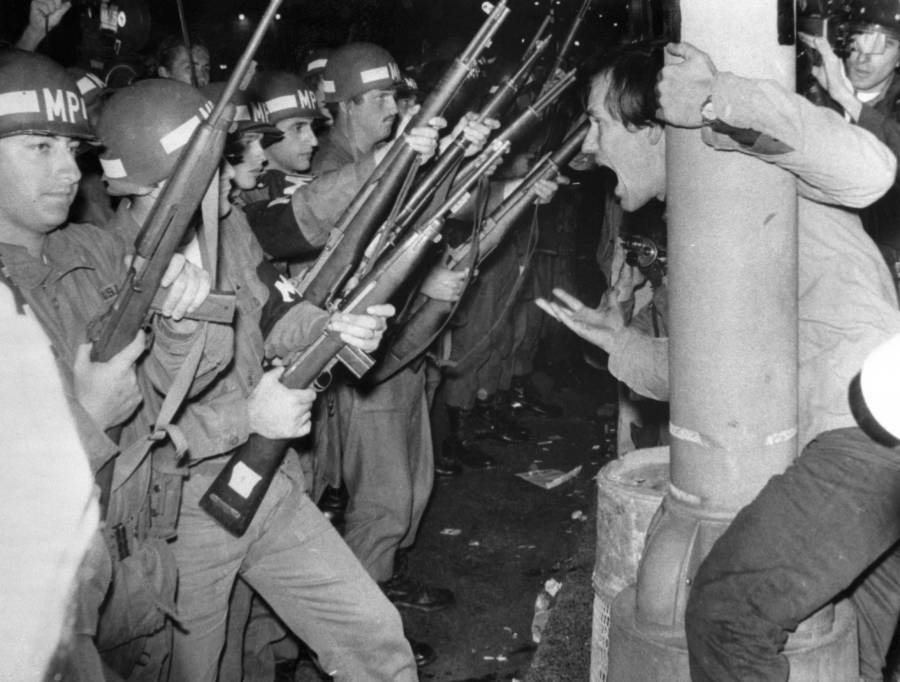 Bettmann/Getty ImagesProtesters clash with the National Guard during the August 1968 riots at the Democratic National Convention.

To Hayden, the three-day Democratic National Convention seemed like an ideal opportunity to “lance the tumor that Vietnam was in our lives.” Hundreds of activist organizations had met in the previous months to properly mobilize for the convention held from Aug. 26 to Aug. 29, 1968. These meetings would later have serious consequences.

Hoping their protests would urge the convention to nominate a candidate who was antiwar, the groups demonstrated outside the International Amphitheater in Chicago. Violence ensued quickly thereafter, with Mayor Richard Daley’s police forces tear-gassing and beating demonstrators.

Countless people were injured during the protests. And hundreds of protesters were arrested, with estimates ranging from 589 to over 650. But only eight of them were hit with federal conspiracy charges.

With Tom Hayden’s SDS proving integral to the mobilized masses, authorities saw him as partially responsible for the events that had unfolded. They also blamed seven other key activists who were involved.

Trial And Conviction Of The Chicago Seven 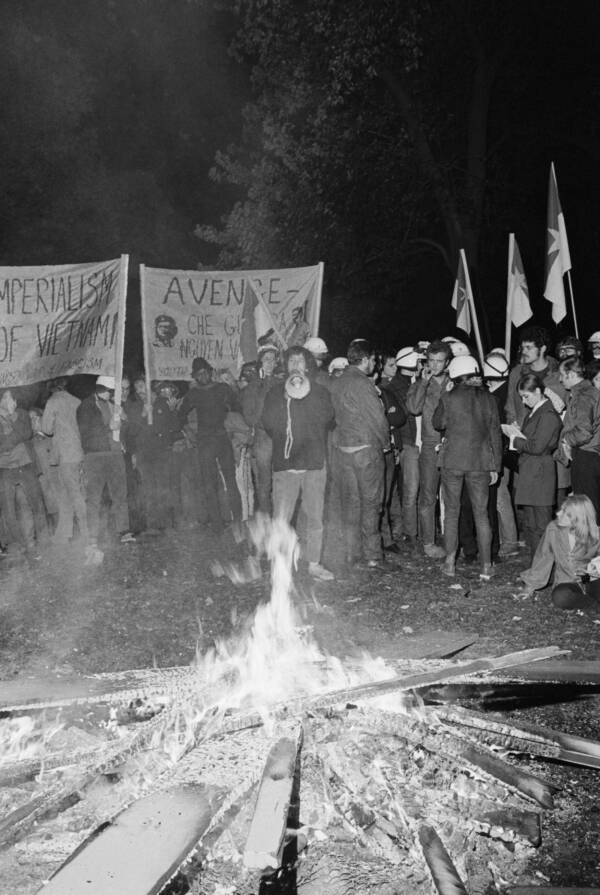 Judge Julius Hoffman presided over the trial, which quickly became a media firestorm. The defendants were charged under provisions of the Civil Rights Act of 1968, which made it a federal crime to cross state lines to incite a riot.

Undeterred by the weight of the charges, Davis and Rubin audibly called the court “bullsh*t.” Hoffman and Rubin even showed up one day dressed in judicial robes to make a mockery of the courtroom.

Despite iconic witnesses on their side, Hoffman, Rubin, Dellinger, Davis, and Hayden were all found guilty of crossing state lines with the intention of starting a riot. They were sentenced to five years in prison and fined $5,000. 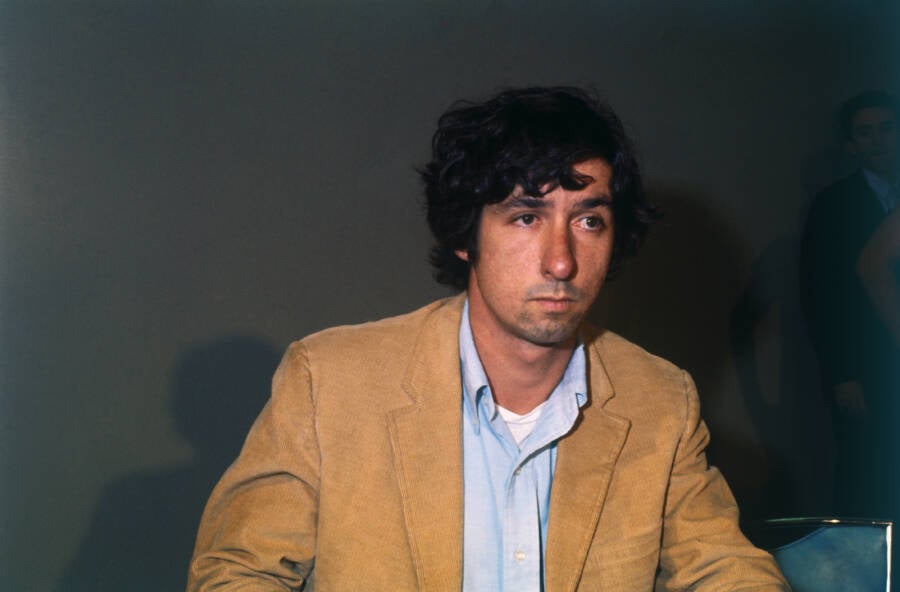 However, none of them were found guilty of conspiracy. And none of them would serve time — since a Court of Appeal overturned the criminal convictions in 1972 due to the judge’s procedural errors as well as his overt hostility to the defendants.

To the authorities’ chagrin, the trial only made the defendants more popular among their supporters. However, Hayden had failed to positively sway the elections. Richard Nixon won in 1968 — and the Vietnam War was far from over.

Regardless of the bleak prospects ahead, Hayden continued to fight for what he thought was right — and even joined the system he’d battled all along to create change from within. 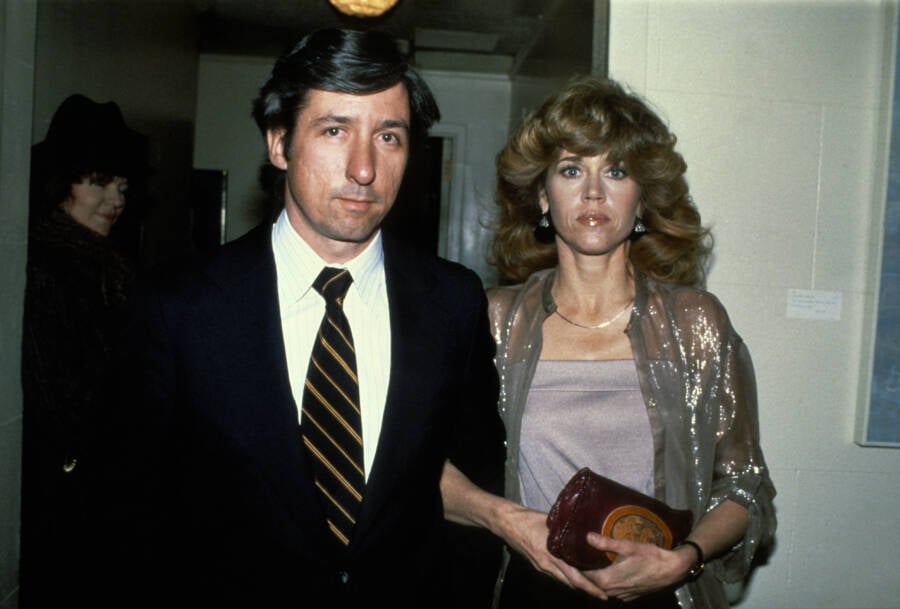 Robin Platzer/IMAGES/Getty ImagesTom Hayden and his ex-wife Jane Fonda at the Los Angeles premiere of The China Syndrome in 1979.

In 1973, Tom Hayden married actress Jane Fonda, whom he’d met at an antiwar rally. By then, the pair had already been through a major controversy together, after Fonda visited Vietnam in 1972 and was photographed on a North Vietnamese anti-aircraft gun. While Fonda was derided as “Hanoi Jane,” Hayden was also heavily criticized for his then-girlfriend’s photo.

As the counterculture rebellion of the 1960s gave way to the stark realities of the 1970s, Hayden decided to enter politics. “The radicalism of the 1960s is fast becoming the common sense of the 1970s,” said Hayden.

While Hayden lost against California Senator John V. Tunney in 1976, he quickly picked himself up and successfully won a seat in the California Legislature in 1982 and held his seat for a decade. Unfortunately, his marriage to Fonda fell apart during this time. 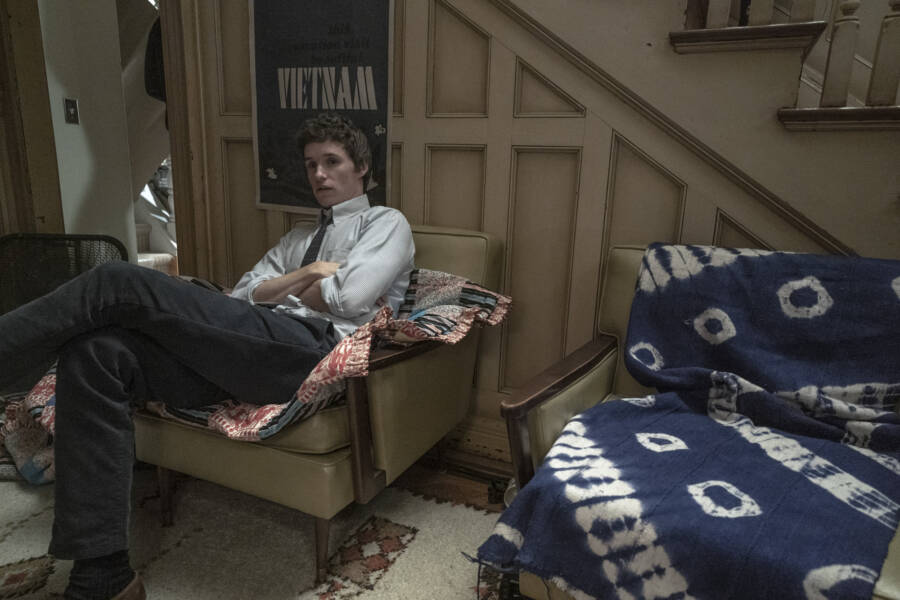 NetflixEddie Redmayne as Tom Hayden in the upcoming Netflix film The Trial of the Chicago 7.

Hayden ran for state senate and won in 1992. He ultimately held on to that seat for eight years. While he continued to fight for progressive causes, Hayden began to view his youthful endeavors as “overly romantic.”

During the 50th anniversary of the Port Huron Statement, he admitted, “You don’t navigate challenges and remain unchanged. Not that you don’t sometimes yearn to be young again, but you’ll never see the world the way you did when you were truly young.”

After learning about Chicago Seven member Tom Hayden, take a look at 66 photos from the 1960s. Then, learn about the history of hippies.