Like most presidents, Trump requested a piece of art for his residence. When that piece was unavailable, the Guggenheim suggested something a little more... flashy. 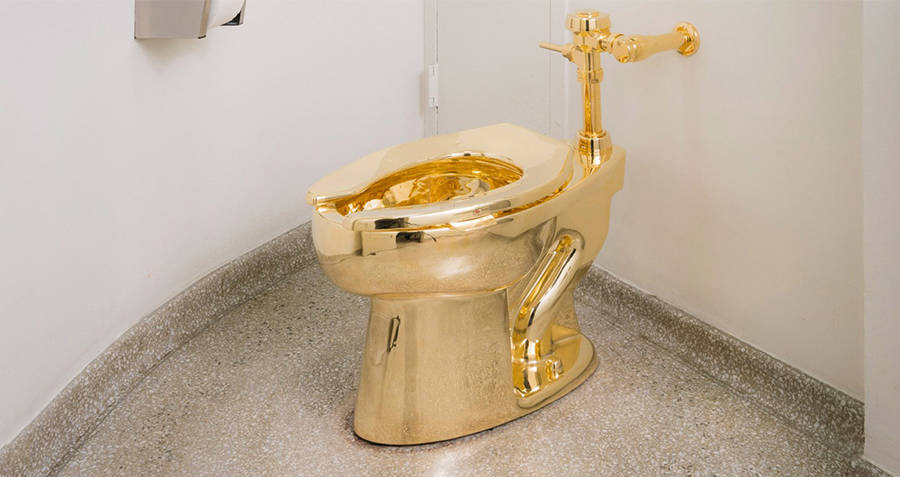 Washington Post“America,” the solid 18-karat gold toilet offered to the Trump’s by the Guggenheim.

As the self-professed best businessman ever, President Donald Trump is no stranger to negotiations. However, we’re guessing that this particular one may have caught him off guard.

According to Sarah Eaton, a spokeswoman for the Guggenheim Art Museum in New York City, the President, and First Lady Melania recently requested a piece of art for their private residence, a Van Gogh titled Landscape With Snow.

Upon receiving the request, the museum’s curator, Nancy Spector, counter-offered. Instead of the Van Gogh, she suggested an 18-karat solid gold toilet.

The interactive (yes, that kind of interactive) work titled “America” has been around since 2016 when it was unveiled by contemporary artist Maurizio Cattelan. For the past two years, the toilet has been on display in a unique gallery space – a public, unisex restroom on the museum’s fifth floor, open to use to whomever the urge strikes.

Though the curator’s counter-offer could have been a little tongue in cheek, it wasn’t without a kernel of truth. Landscape With Snow really was unavailable to the Trumps, or anyone else who would have requested it, as it is currently en route to the Guggenheim’s museum in Bilbao, Spain. Naturally, as any curator would have done, Spector offered up another piece. After all, the toilet’s exhibit was coming to a close, and it would soon be available.

“[Cattelan] would like to offer it to the White House for a long-term loan,” wrote Spector. “It is, of course, extremely valuable and somewhat fragile, but we would provide all the instructions for its installation and care.”

And truly, the offer wasn’t necessarily in jest – President Trump has been known to install solid gold furnishings in his private residences in the past – and indeed was a valuable one. The artist has not revealed the exact cost of the toilet, but most critics put it at roughly $1 million.

According to Cattelan, the work was a satire, depicting the ridiculousness caused by excess wealth. He described it as “1 percent art for the 99 percent.”

The White House has yet to comment on the unusual offer.

Next, check out these 11 things you probably didn’t know about Van Gogh. Then, read about the most expensive inauguration in history – Trump’s of course.