As much as we'd like to see Kim Jong-un out of power, there were plenty of reasons for the US not to take him out when it had the chance. 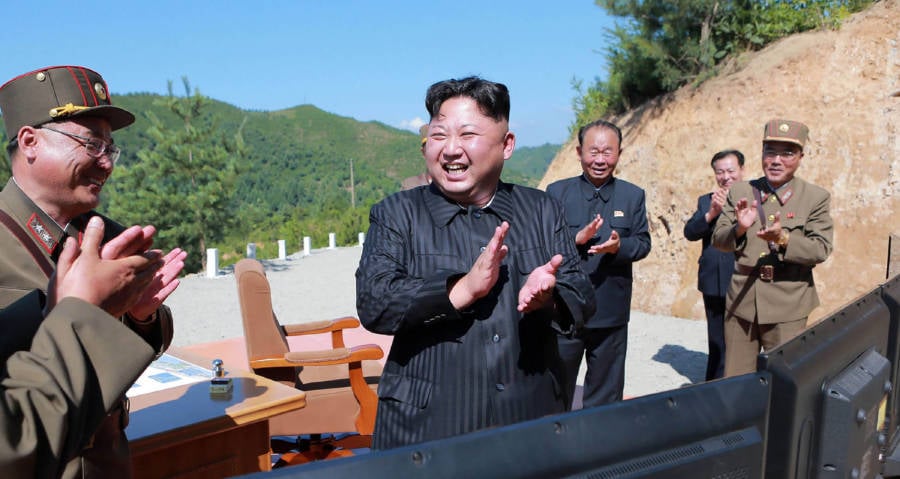 Video has surfaced from July 4 showing North Korean dictator Kim Jong-un hanging out on a launch pad prior to the firing of North Korea’s first ICBM test later that day.

In the video, you can see Kim Jong-un casually (or nervously) smoking cigarettes as he paces around the landing site for 70 minutes in an open field with little defense.

A source said that the US had knowledge of the exact location of both Kim Jong-un and this experimental rocket during this time. This has led some to wonder why the US government did not simply take out Kim Jong-un, and the first stages of their ICBM development in one fell swoop. Hypothetically, with this information and the position of US long-range missiles, the US Army could have easily sent a precision strike to the location.

Kim Jong-un just casually strolling around while the Hwasong-14 ICBM is erected is quite something. (Wouldn’t want a VIP that close.) pic.twitter.com/a3FDIenZYU

To take out the leader of a foreign nation we are not currently at war with would constitute a major breach of international norms and longstanding US policy. Though there is no international law specifically prohibiting it, such an assassination could be covered by the 1907 Hague conventions prohibiting the killing hostile individuals “treacherously”.

Killing a head of state would also conflict with the US policy of avoiding assassinating foreign leaders that began in 1974 with an executive order signed by President Gerald Ford.

Most practically speaking, simply eliminating the leader of North Korea could unleash any one of a number of more problematic scenarios than the one currently playing out.

The North Korean government has easily shifted from the death of one leader to another with little change in policy toward the US. When Kim Jung-un’s father, Kim Jong-il, died, the government calmly transitioned to Kim Jong-un. Unlike other dictatorships run by charismatic military leaders who seize power, Kim Jong-un is part of a dynasty of rulers who have shifted from leader to leader while more or less maintaining the status quo, however uneasy it has been.

If his death did plunge North Korea into chaos, the implications could be even more disastrous. As horrifying as the current North Korean regime is, it has been more or less predictable.

Assassinating Kim Jong-un could lead to a power struggle among party leadership and therefore general instability in the country. Any breakdown in the leadership could yield a breakdown in what little civil society the country has, which in turn could yield to a massive refugee crisis. This is actually China’s worse case scenario, in which millions of people brainwashed by a never-ending onslaught of propaganda come pouring over its border.

Whatever person or faction does take control would have the country’s nuclear arsenal at its disposal, and might have fewer qualms about using it or conventional weapons against South Korea, Japan, or other US allies and interests. Given the complexities of geopolitics and myriad future considerations to had from such a decision, the assassination of a world leader is typically not the best course of action.

Next, read about the South Korean plan to kill Kim Jong-un if it becomes politically beneficial to do so. Then, learn more about Kim Jong-un’s father, Kim Jong-il with this list of facts you might not know about him.