The artists write about brothels, cheekily disparage each other, and then discuss "pictorial studies" and opening a new artists' association. 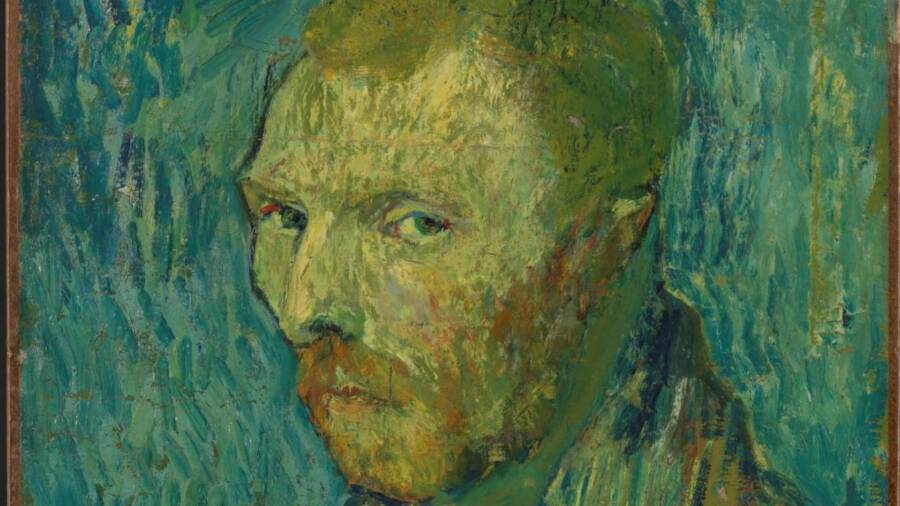 NasjonalmuseetThe letter was written by both men about a month before their friendship dissolved.

There is only one letter in existence known to have been jointly written by painters Vincent Van Gogh and Paul Gauguin. Not only is that note now up for auction at an estimated $203,000 and $282,000, but it also recounts the artists’ many visits to French brothels.

According to CNN, the November 1888 letter was addressed to fellow painter and Post-Impressionist artist Émile Bernard. Van Gogh had already created what would be some of his most popular works by this time, including “Bedroom in Arles” and “Van Gogh’s Chair.”

Handwritten in Arles, France by both painters, the four-page letter is fairly salacious. Gauguin had only recently joined Van Gogh in Arles, where the latter had been since February. The two men met two years earlier — and made enough vivid memories to put down on paper.

“We’ve made some excursions in the brothels, and it’s likely that we’ll eventually go there often for work,” wrote Van Gogh. “At the moment Gauguin has a canvas in progress of the same night cafe that I also painted, but with figures seen in the brothels. It promises to become a beautiful thing.” 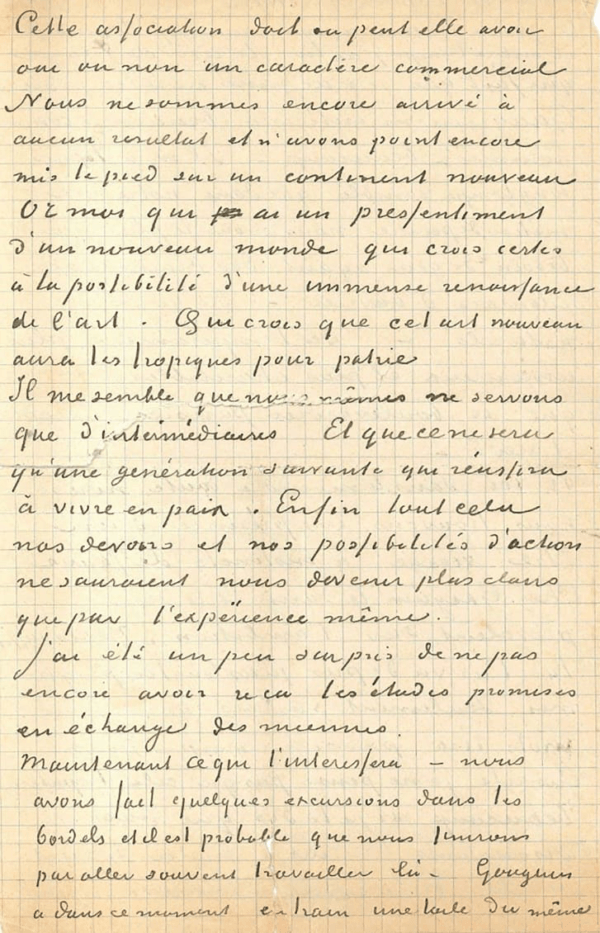 The letter begins with Van Gogh describing Gauguin as an “unspoiled creature with the instincts of a wild beast.” He added, “With Gauguin, blood and sex have the edge over ambition.”

After this description, Van Gogh redirects his attention to more academic matters, including his thoughts on establishing a new artists’ association and pontificating on some pictorial studies. Then, Gauguin takes over and cheekily warns the recipient, “Don’t listen to Vincent. As you know, he’s prone to admire and ditto to be indulgent.” 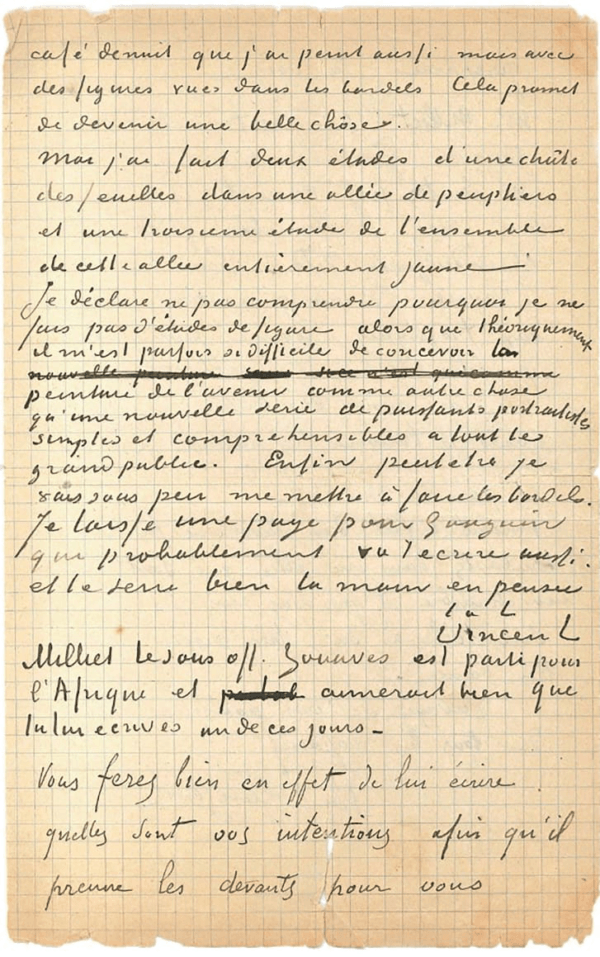 Drouot EstimationsThe letter detailed how in order for Gauguin to finish a painting of prostitutes, the two men needed to visit a brothel.

To Gauguin’s point, Van Gogh was certainly known to be indulgent. Not only did he frequently visit brothels, but he famously delivered his own severed ear to a prostitute, too.

The bloody act, which occurred a mere month after the writing of this letter, practically ended the pair’s friendship. According to The Daily Mail, historians believe the amputation came in a moment of rage following a fight with Gauguin.

While there are over 900 letters written by or to Van Gogh, the majority include communications between he and his brother, Theo Van Gogh. 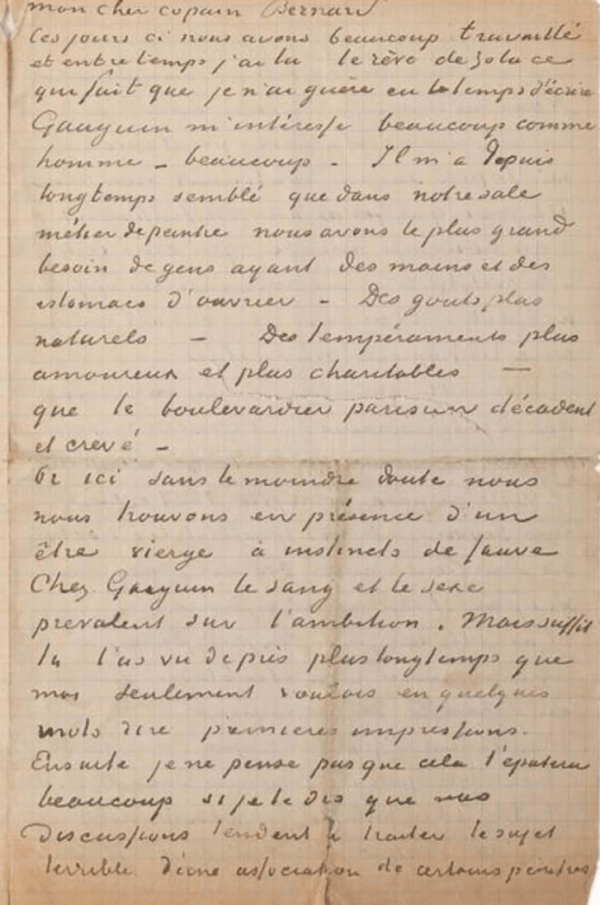 Drouot EstimationsVan Gogh spent the early half of the 1880s painting portraits of numerous prostitutes, including seamstress Sien Hoornik with whom he had a relationship.

For art historians, these correspondences reveal invaluable information about the painter’s life as he was quite expressive about his troubles and inspirations. This particular document, of course, is notable for both its collaborative nature and its salacious content.

French auction house Drouot Estimations states that the letter is an important piece of academia. They added that despite its “fragility,” the letter is “exceptional for the extraordinary meeting of two immense painters but also for the lucidity and the certainty that their painting will revolutionize the art of future generations.”

The sale is scheduled for June 16, 2020, and will include other letters written by Gauguin to both his wife and an unknown lover. The auction will also hammer out the new owners of works by Modigliani, Renoir, Cêzanne, and Picasso.

Next up, read about the priceless Van Gogh painting that was stolen from a museum during the COVID-19 shutdown. Then, learn about the surprising history of prostitution around the world.