A 2021 report of a Yowie in Queensland is just another in a long series of alleged encounters with this terrifying creature of Aboriginal myth.

From snakes to scorpions, the Australian Outback infamously contains a wealth of fearsome animals. But legend also states that this vast wilderness is home to more than one mythical creature — including a Bigfoot-like beast called a Yowie.

Though accounts from Europeans only date to the 19th century, stories from Australia’s Indigenous Aboriginal people are believed to go back much further. These tales speak of an enormous beast similar to an ape, earning the creature nicknames like the “hairy man of the wood.” 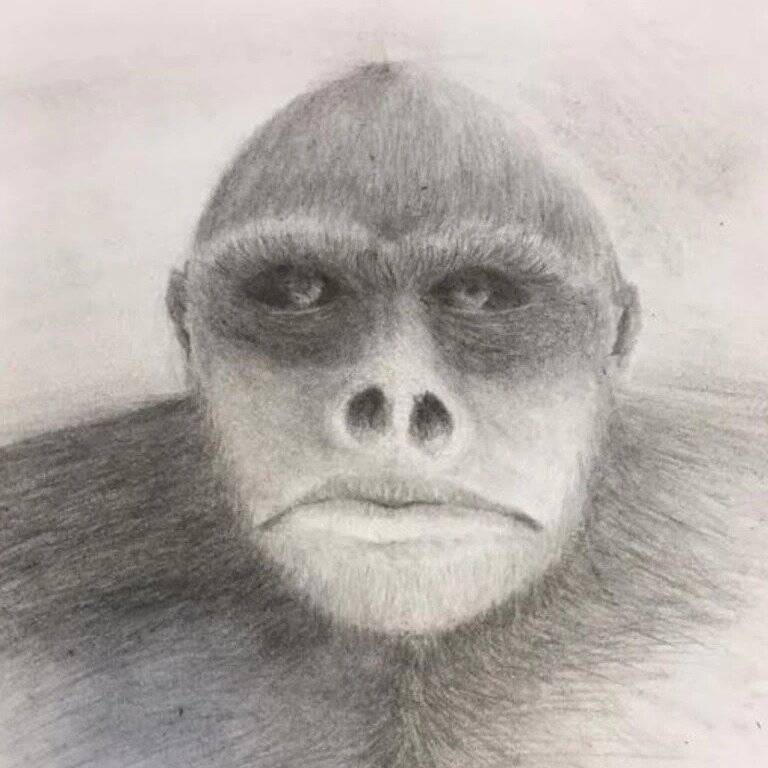 AYR/Buck BuckinghamA sketch of the Yowie made following the alleged 2021 sighting in Queensland.

From the most recent sightings to the folklore surrounding this terrifying behemoth, here’s everything you need to know about Australia’s Yowie.

The Harrowing 2021 Yowie Sighting In Queensland

The three men could hardly believe their eyes. There, on a darkened street in Queensland, Australia in December 2021, they’d come face-to-face with a Yowie.

“We were in utter disbelief of what we were seeing,” said Stirling Slocock-Bennett, who spotted the elusive cryptid alongside Seamus Fitzgerald and one other man, all of whom work on a plantation.

He added: “It definitely was a scary moment for me, as I said I was so confused and shook of what we were seeing, and as we got closer and closer it didn’t make sense like you’d hope.”

The three men came across the alleged Yowie on Dec. 4 as they made their way to the Jimna Base Camp. As they tell it, they first noticed a “slouched figure” lurking under a streetlight. Fitzgerald described the beast as having an “apelike” face and “long arms.”

“We initially thought it was a boar or a really big animal until we got closer and saw it run off in a very apelike way,” Fitzgerald explained.

The experience left him shaken and questioning his understanding of the world. “I’ve never really had a paranormal or strange experience like that before,” he said, adding: “I hardly slept that night and the feeling was overwhelming that I had seen something that I never believed in previously.” 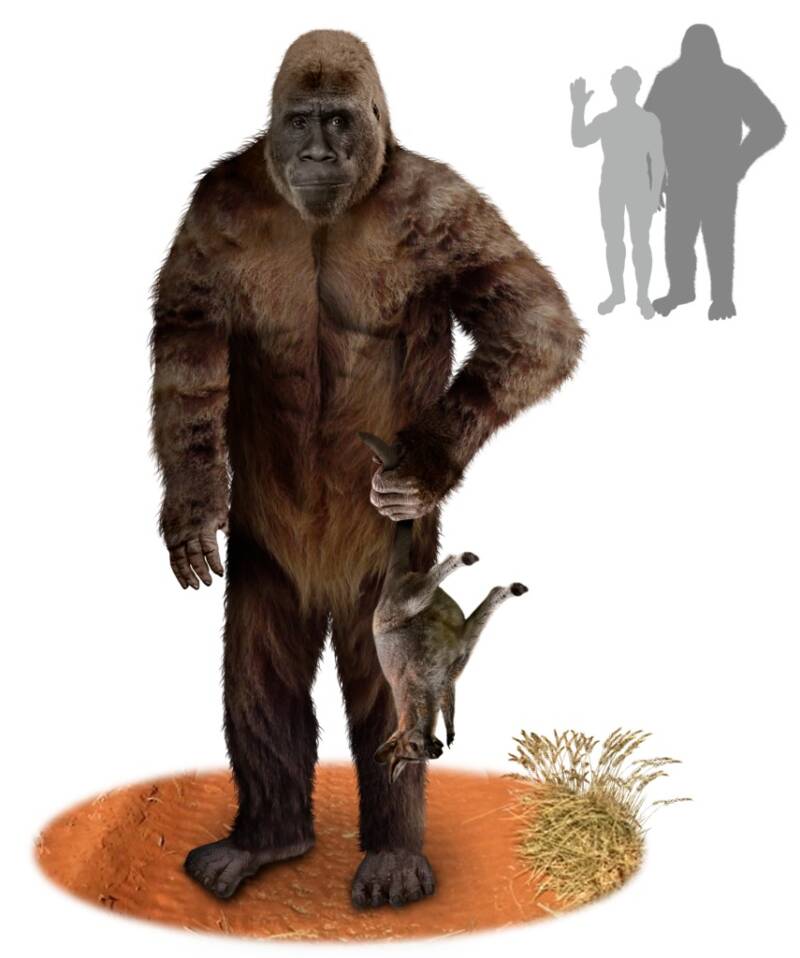 Wikimedia CommonsA depiction of a Yowie holding a dead wallaby.

Their sighting encouraged others to explore North Queensland in hopes of catching a glimpse of a Yowie — who apparently emerge often during storms. And Fitzgerald’s experience has inspired him to learn more about the mythical beast.

“I’m very intrigued to find out what other people have seen and experienced,” he said.

Indeed, theirs is hardly the first Yowie sighting in Australian history. Scattered encounters with the beast have occurred from 1790 until today.

So, what is a Yowie?

Inside The Long History Of The Yowie

The legend of the Yowie starts with Australia’s Aboriginal people. The Kuku Yalanji tribe of far north Queensland claim that they long co-existed with the Yowie, though it has reportedly attacked them on more than one occasion.

According to legend, there are two types of Yowie. One can grow up to ten feet tall; the other four or five feet tall.

Generally, they’re described as having ape-like faces and orangey-brown hair that grows to about two to four inches long. Though the creature is often shy, it can turn aggressive and violent.

Though many, naturally, doubt the existence of the Yowie, some Aboriginal cave art seems to depict tall, hairy creatures painted alongside Aboriginal humans. Some have suggested that this is a sign that the Yowie was an early hominid that since went extinct — or perhaps merely disappeared deep into the Australian Outback, away from human eyes. 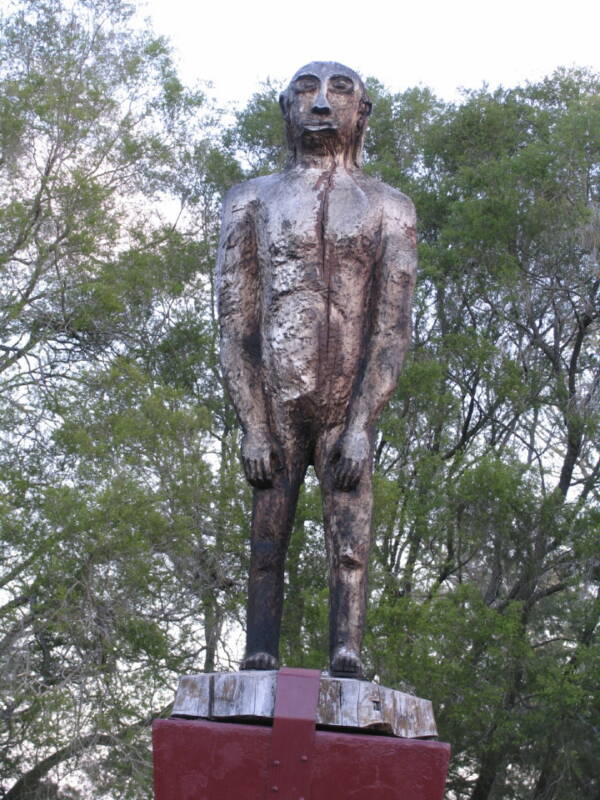 Since the 19th century, recorded sightings of the creature are plentiful. One written record from 1842 states:

“The natives of Australia … believe in … [the] YAHOO … This being they describe as resembling a man … of nearly the same height, … with long white hair hanging down from the head over the features … the arms as extraordinarily long, furnished at the extremities with great talons, and the feet turned backwards, so that, on flying from man, the imprint of the foot appears as if the being had travelled in the opposite direction. Altogether, they describe it as a hideous monster of an unearthy character and ape-like appearance.”

Meanwhile, a report from the 1880s states that naturalist Henry James McCooey saw the creature in New South Wales. But according to him, it was only five feet tall and was “tailless and covered with very long black hair.”

The descriptions of the Yowie have indeed varied over the years, but the terror and wonder have remained the same — all the way to the present day.

Modern-Day Sightings Of The Australian Bigfoot

To this day, the legend of the Yowie still seems to have a grip on Australia. According to Dean Harrison, from Australian Yowie Research, hundreds of people have reported sightings of the cryptid in recent years. He’s even supposedly seen one himself.

“It was like nothing I had ever seen before in my entire life, I knew I had to move, and the moment I did this thing roared,” Harrison said, calling the experience “life-changing.”

He said, “I thought I was going to die, but then it started running ahead of me and so I veered away from the forest tree line.”

A Yowie hunter named Steve Piper captured what he believes to be the mysterious creature on film in 2000. That film has achieved notoriety among cryptid enthusiasts, much like the Patterson-Gimlin film from the United States that alleges to depict Bigfoot.

Does the Yowie exist? Are the ancient legends true? Some people — including Slocock-Bennett, Fitzgerald, and their coworker — will certainly insist that the creature is really out there.

Just like Bigfoot or the Yeti, this legendary beast is purported to hide deep in the woods and only rarely cross the paths of man. But maybe you need to see it to believe it.

After reading about the Yowie, learn about other mythical creatures like Wyoming’s Jackalope. Or, look through this list of cryptids from around the world.