Yuncheng Salt Lake And Its Breathtaking Rainbow Of Colored Algae

Yuncheng Salt Lake is loaded with salt-tolerant algae that react to the mineral, producing a beautiful spectrum of color. 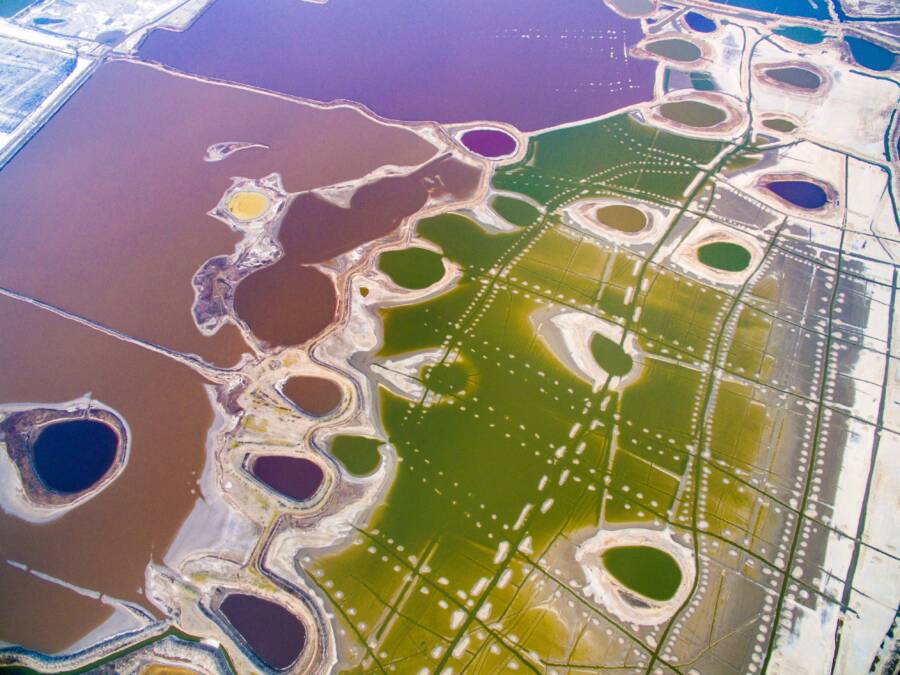 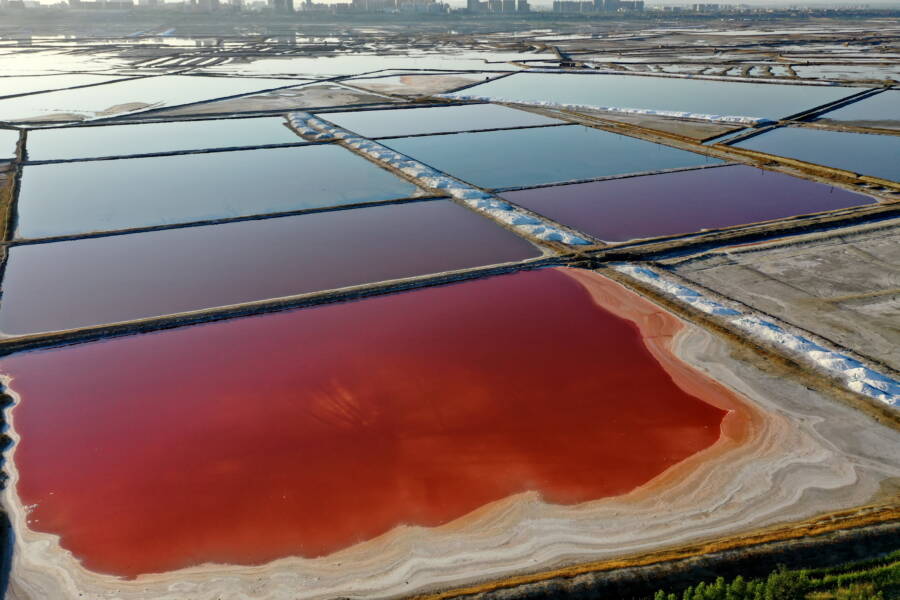 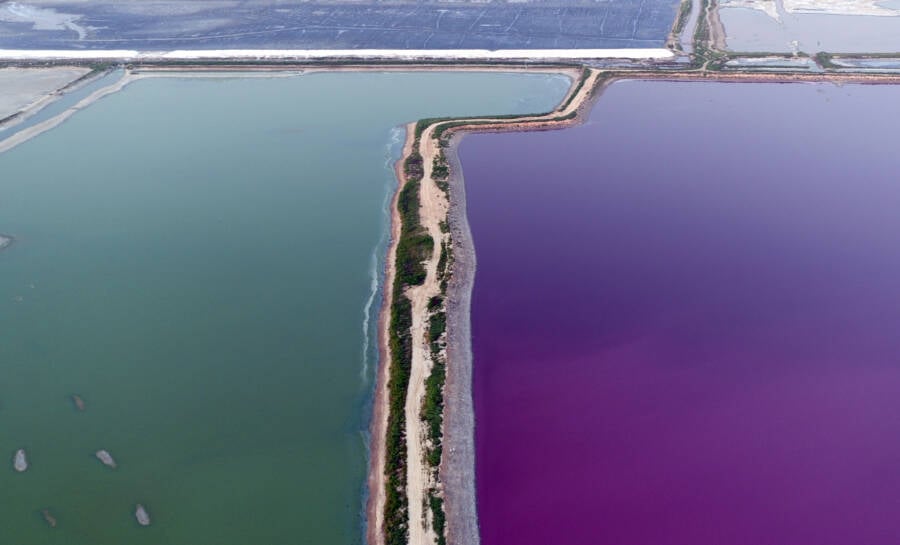 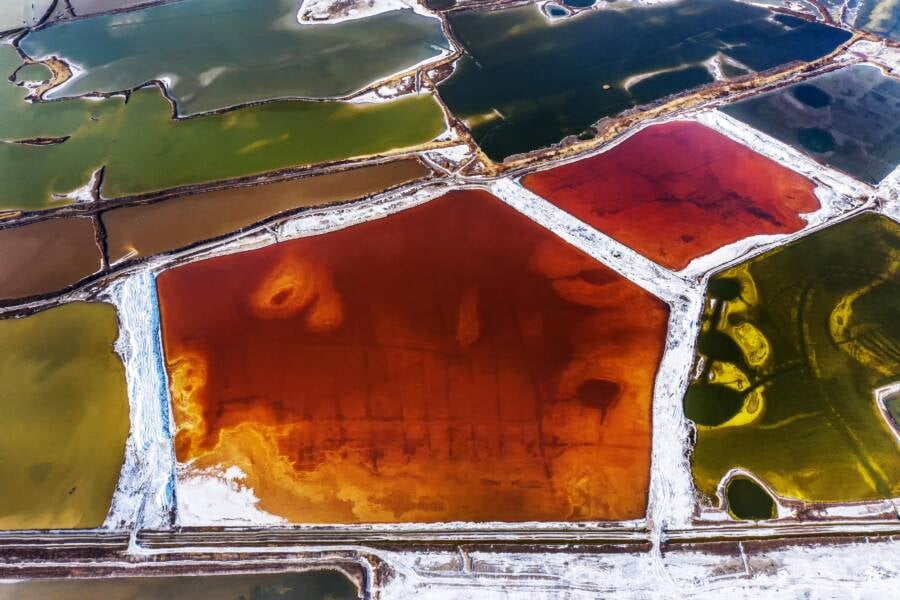 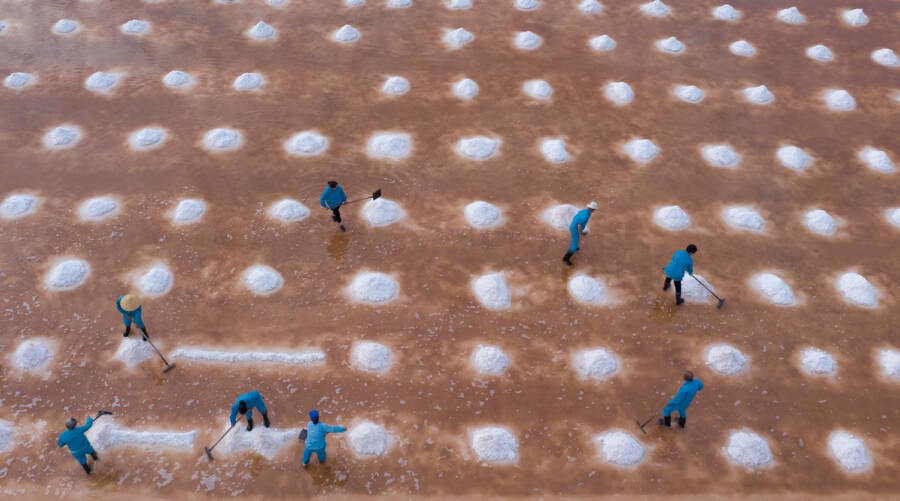 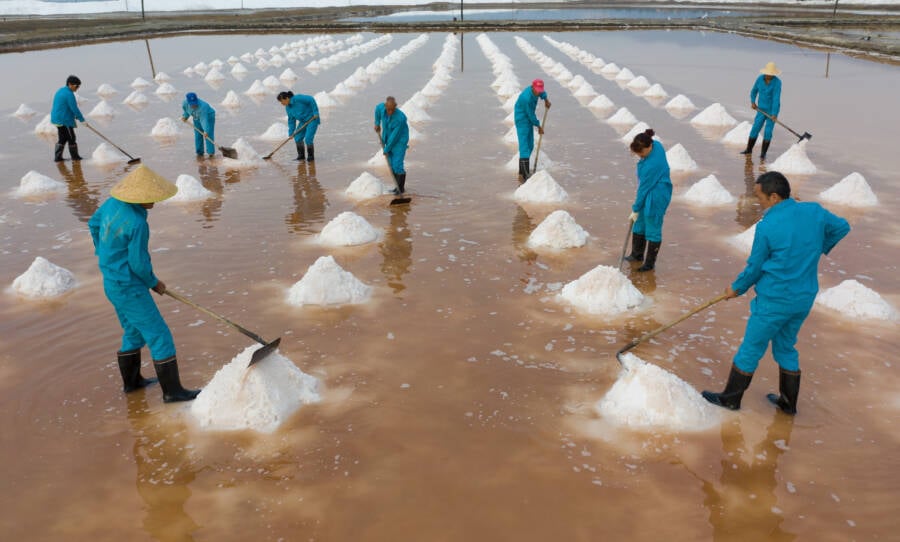 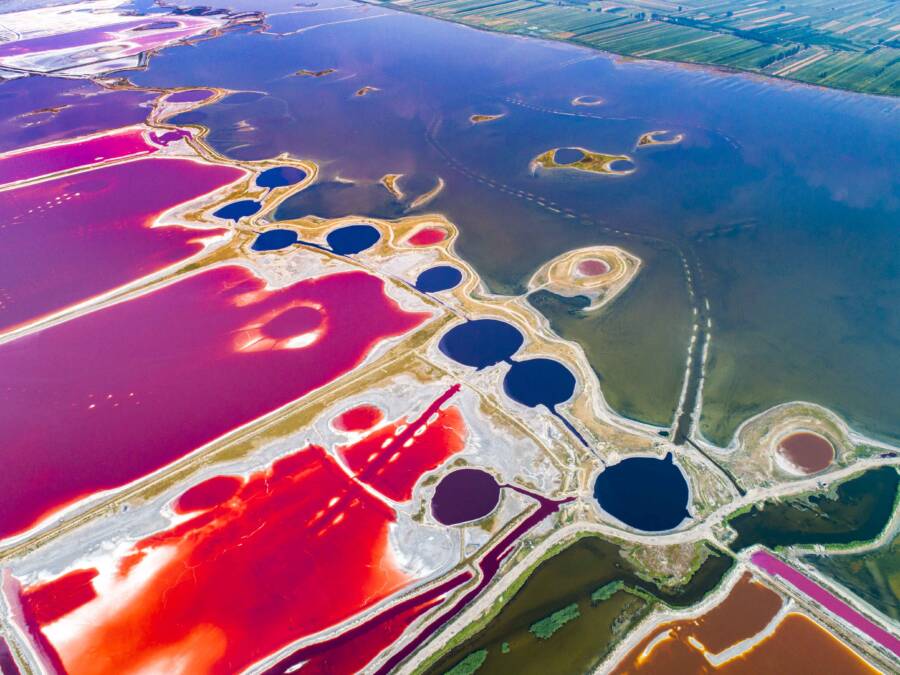 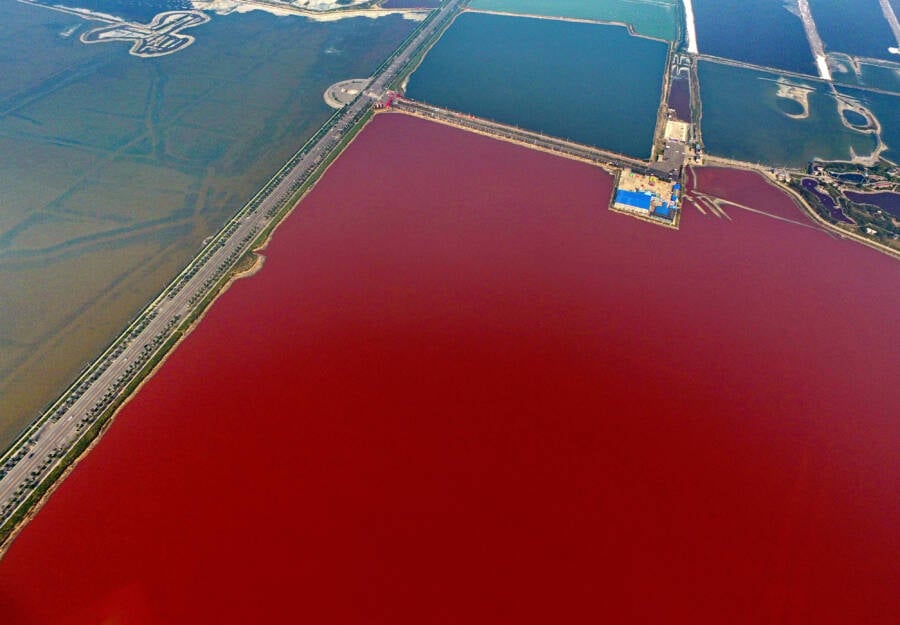 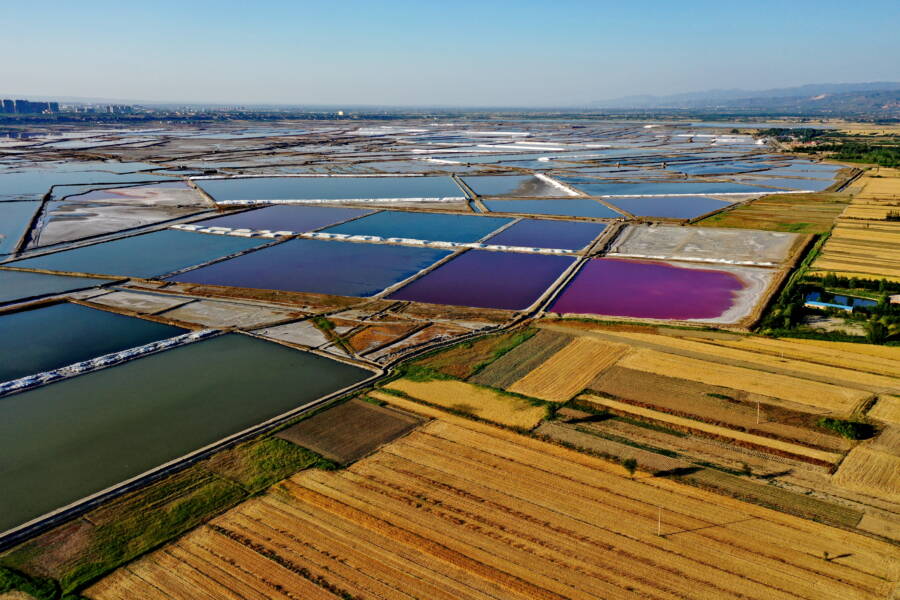 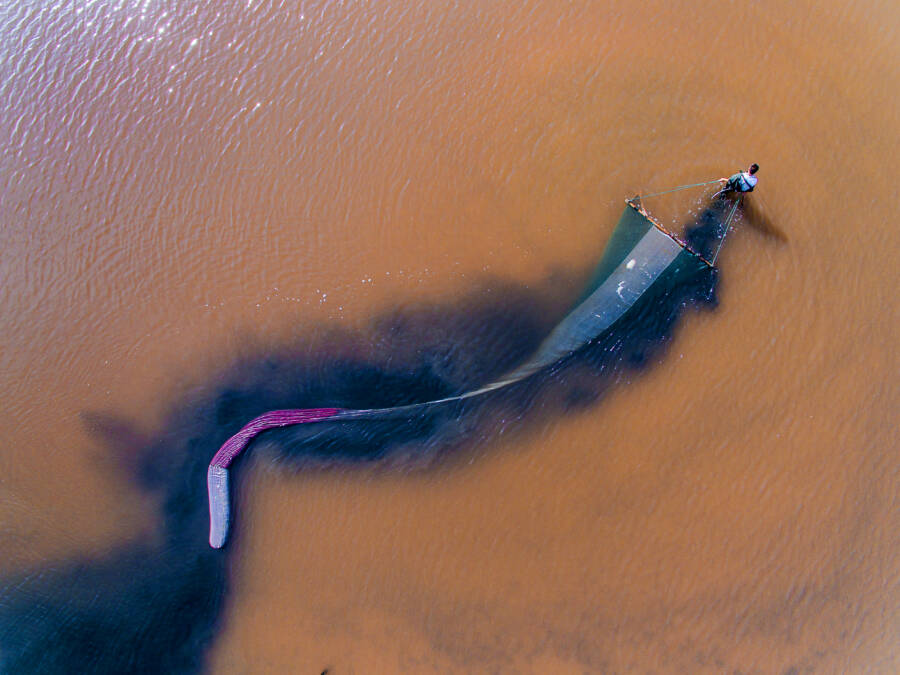 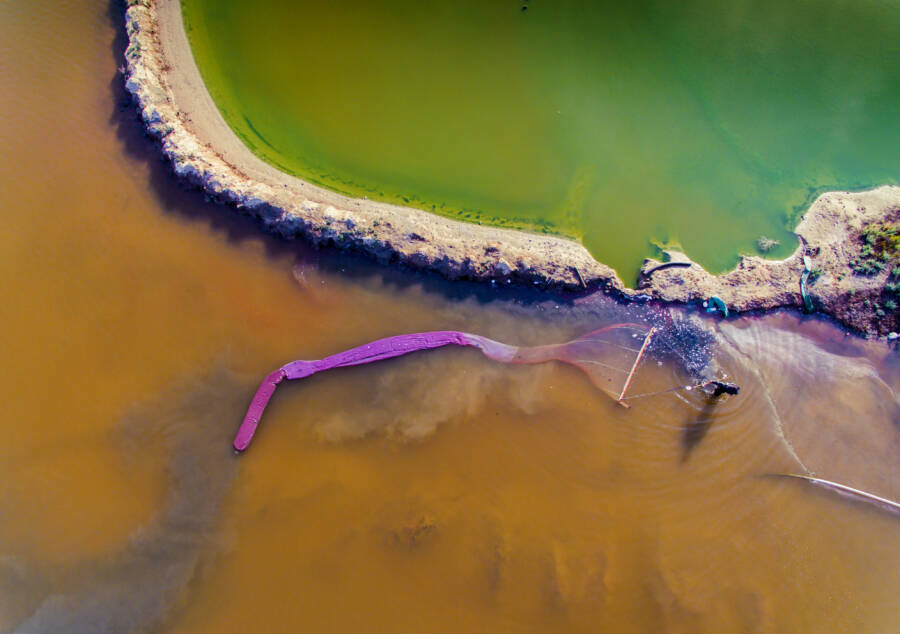 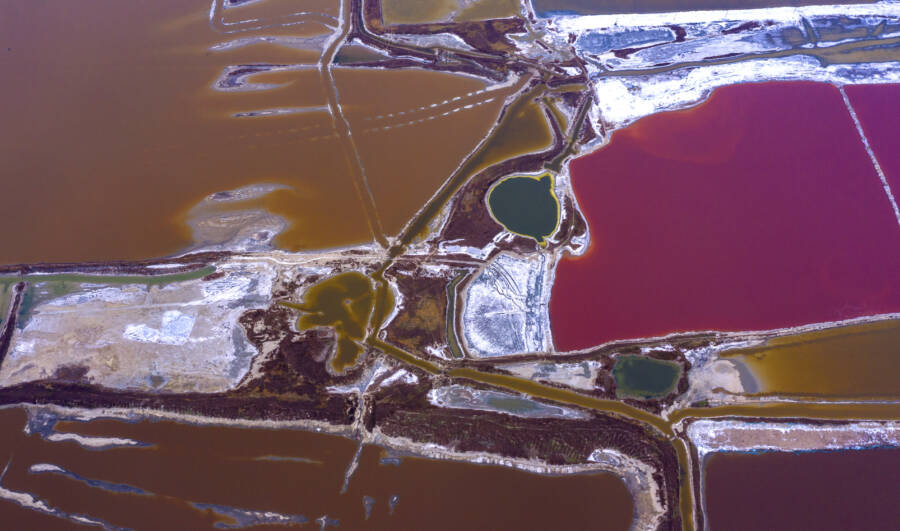 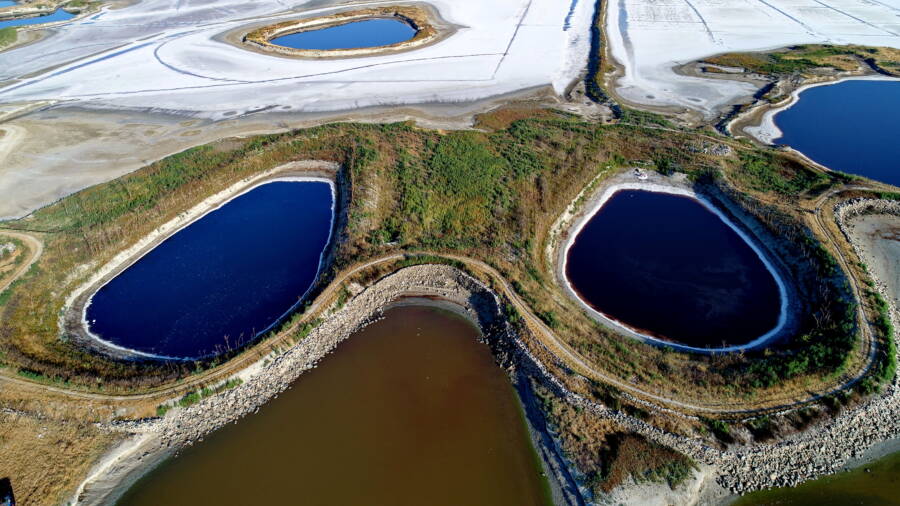 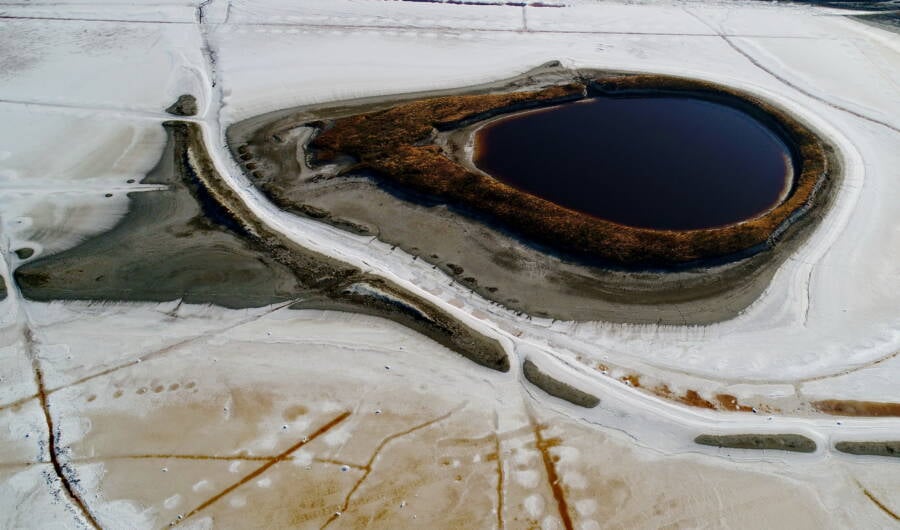 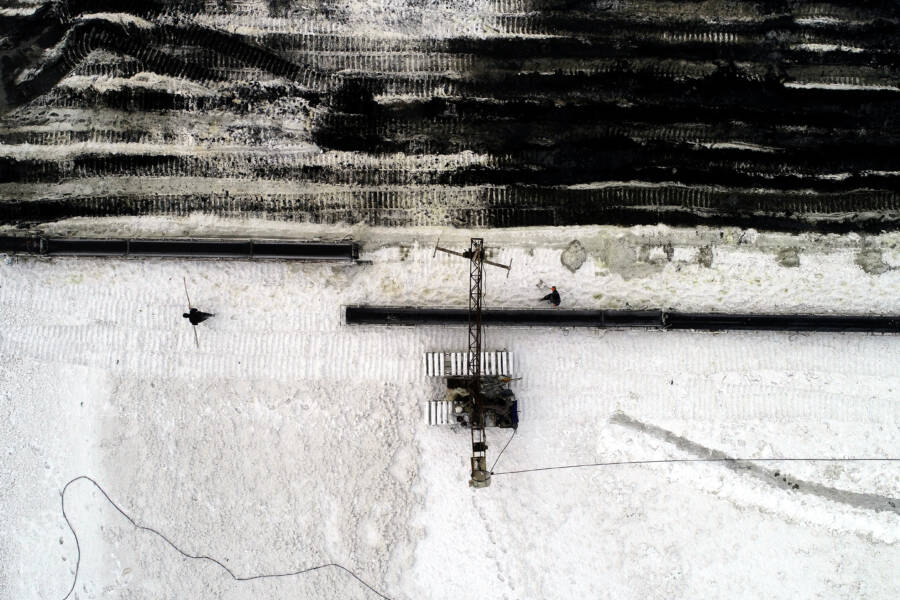 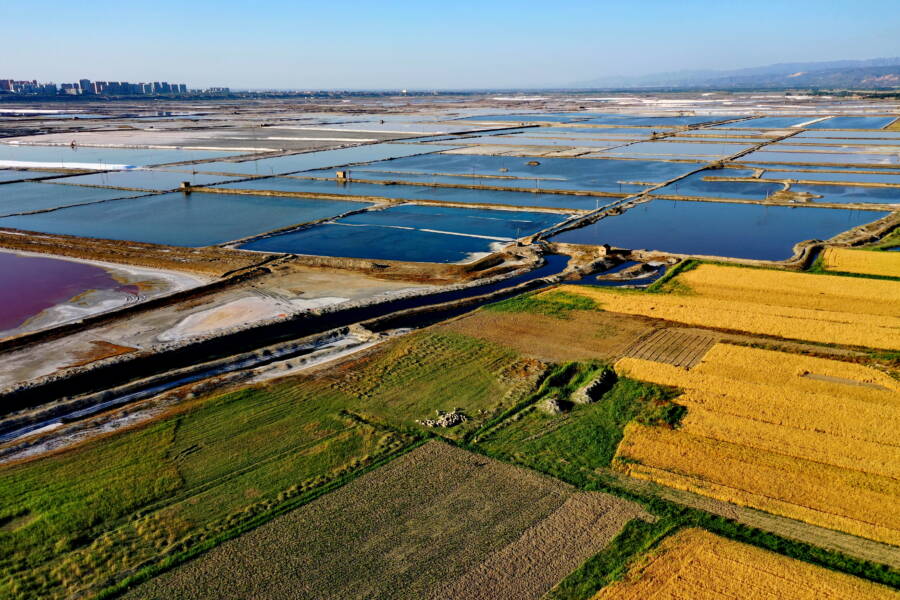 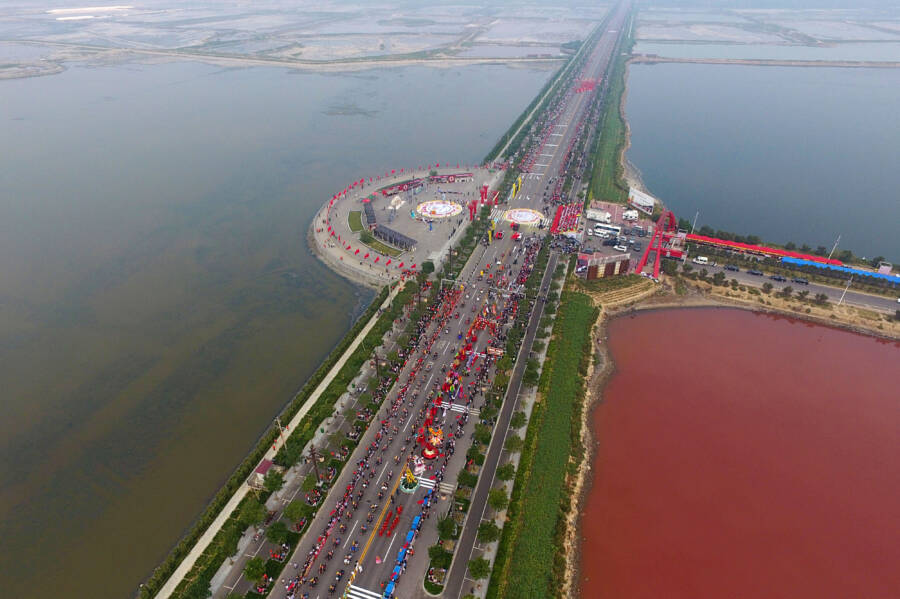 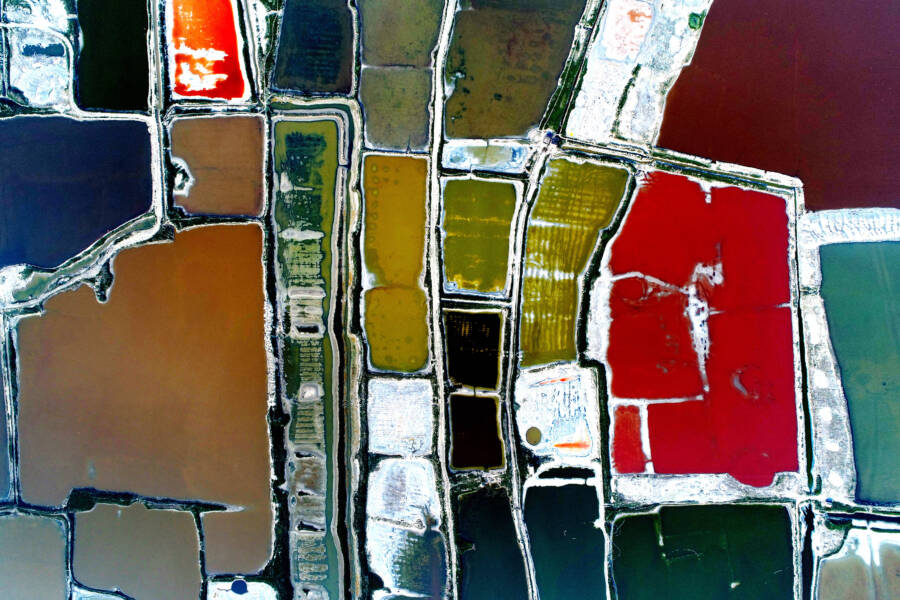 China's Yuncheng Salt Lake may often be called China's Dead Sea, but it's hardly void of life — nor, in fact, is it a sea. The lake is awash in technicolor hues of purple, bright blue, green, and bright crimson in hot weather. With the heat and increased light, the saltwater incubates chemical reactions between minerals and organisms, creating a fantastic palette of colors in the process.

From above, the colors resemble a vibrantly pieced-together quilt divided by thin, gray lines of salt ridges and roadways. Though its beauty is evident, it's not the main reason that China has a special relationship with the Yuncheng Salt Lake — also known as Xiechi Lake. For locals, the lake is remarkable for the salt it produces.

China is the world's largest producer of salt at 48 million tons per year. History reports that wars ensued over possession of the salt lake and nearby temples are dedicated to salt gods — though locals these days are more apt to visit the brilliantly—colored, artist's palette of a lake.

Learn the history and see the wonders of Yuncheng Salt Lake below and in the gallery above.

The Science Behind Yuncheng Salt Lake

Colors like magenta, violet, and yellow appear in Yuncheng Salt Lake due to a unique species of micro-algae called Dunaliella salina that creates algal blooms. Normally, these present as green in the water. However, the blooms are actually a vast accumulation of algae with protective carotenoids — plant pigments — brought out by the environment. All this occurs on the cellular level inside the algae.

D. salina is the most salt-tolerant organism, so it's no surprise you can find it in salt lakes throughout the world. Its pigments are so intense, manufacturers use them as coloring in food additives and cosmetics.

Furthermore, like the Dead Sea, Yuncheng contains many minerals considered to be good for the skin.

Unlike the Dead Sea, however, Yuncheng Salt Lake is full of sulfates that support life. The chloride in the Dead Sea is fairly hostile to life forms of any kind. 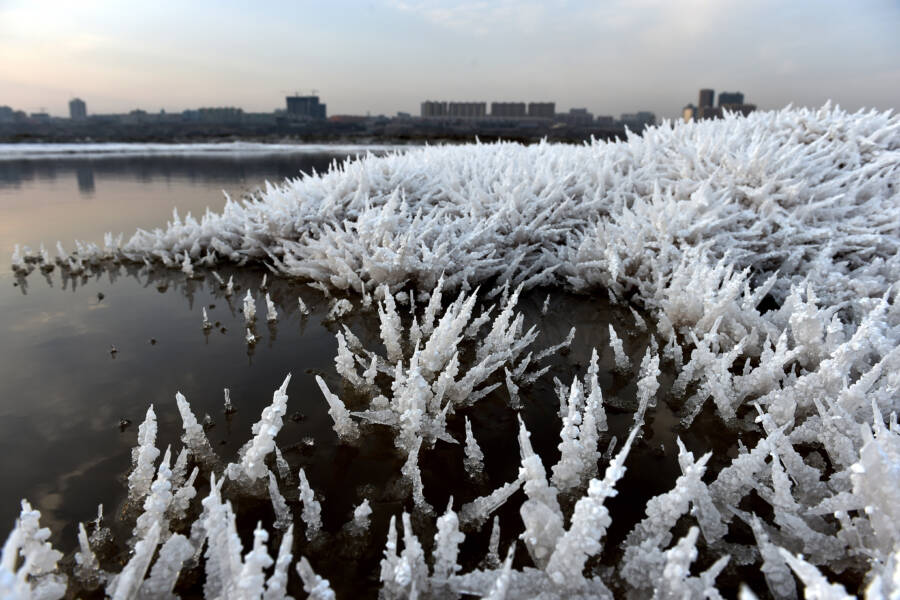 Xinhua/Zhan Yan via Getty ImagesMirabilite rime is formed when mirabilite crystallizes at a low temperature.

Just as the heat is partially responsible for the colorful micro-algae blooms, winter has its own cool trick. When the temperatures drop, Yuncheng Salt Lake forms crystals on its surface. They are called mirabilite and can resemble blossoming flowers or intricate crystal towers.

Mirabilite rime is formed when magnesium sulfate crystallizes and can be translucent or sometimes shades of pink. The Chinese sometimes refer to it as the "salt flowers blossoming."

This only happens when temperatures are under 23 degrees Fahrenheit (-5 degrees Celsius), so while it doesn't happen every year, it's a beautiful phenomenon when it does.

The History Of Salt Collecting At Yuncheng

Yuncheng Salt Lake formed roughly 500 million years ago, and locals have harvested its salt for at least the last 4,000 years. Over 1,000 years ago, the ancient Chinese honed a five-step production method of creating edible salt. This honored trade had been passed down from master to apprentice for generations.

In this method, lake water went through a series of steps including sunbathing, filtering, storage, crystallization, and finally shoveling — all done by hand. However, by the 1980s, this time-honored traditional method came to a halt. The physical toll on laborers became too high and there was a lack of apprentices willing to learn the craft.

Though the Chinese abandoned their artisanal process for salt production, it is a tradition that sheds light on the importance of the mineral and its preparation. The traditional five-step salt production method was included in the national intangible cultural heritage list in 2014. 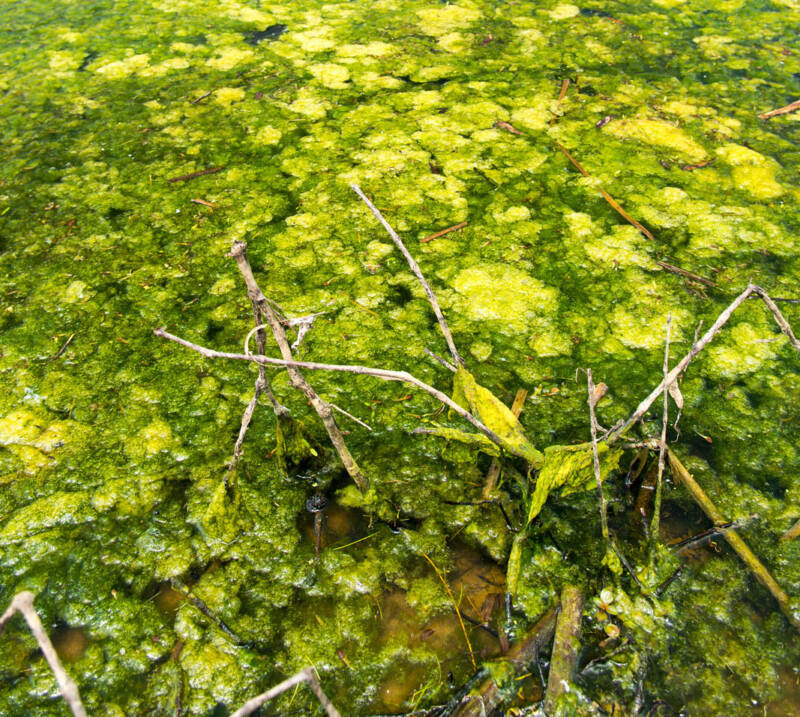 U.S. Gov/FlickrAlgae so thick it is creating a dead zone.

Unfortunately, algal blooms in Yuncheng Salt Lake can result in what's called a dead zone. As the algae continue to bloom and multiply, other life forms become nutrient deficient and die. In turn, when these life forms decay, it depletes the water's oxygen supply.

Algal blooms on the water's surface also prevent the absorption of oxygen to organisms living beneath them. With both reduced sunlight and oxygen, fish, aquatic insects — even seagrasses suffer immensely.

While many algal blooms are considered toxic to people, the ecological study of D. salina in particular is somewhat neglected.

The algal blooms usually die not long after they appear; the ecosystem simply cannot support them for long periods. But when they die off, that doesn't mean they'll be gone for long. "Some of [the increase in blooms] can be attributed to global climate change," said Timothy Davis, a research ecologist with the National Oceanic and Atmospheric Administration's Great Lakes Environmental Research Laboratory in Michigan.

As the climate continues to change, the future of Yuncheng Salt Lake will surely change along with it. Nevertheless, it's sure to remain one of the most fascinatingly unique bodies on water on planet Earth.

Next, read about India's Roopkund Lake, where skeletons frequently wash ashore. Then, explore the turquoise wonders of Russia's Lake Baikal.