A Sexy And Tasteful Illustrated History Of Women’s Swimwear

From string bikinis to high-waisted bottoms and cutouts, bathing suit options are endless these days — patterns and styles exist for everyone and every body type.

But that wasn’t always the case. The swimwear we recognize today didn’t really emerge until the early 1900s, and as the following images show, women’s swimwear has definitely come a long way since then: 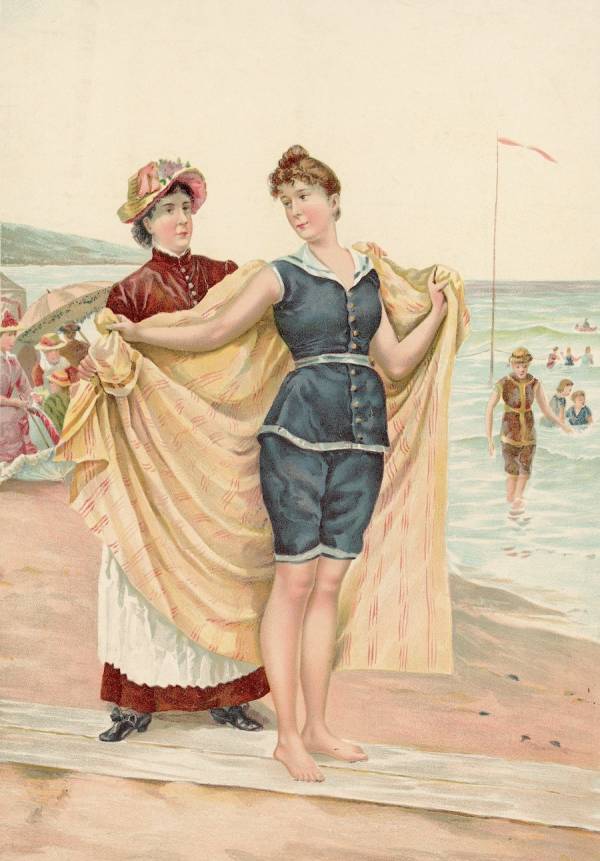 In the early 1800s people began to flock to beaches for sunny (and water-filled) amusement, which called for water-activity appropriate clothing.

In that time, modesty was key. Women wore long bathing dresses with weights to hold down the dress in the water and bloomers or stockings. Photo: Kean Collection/Getty Images 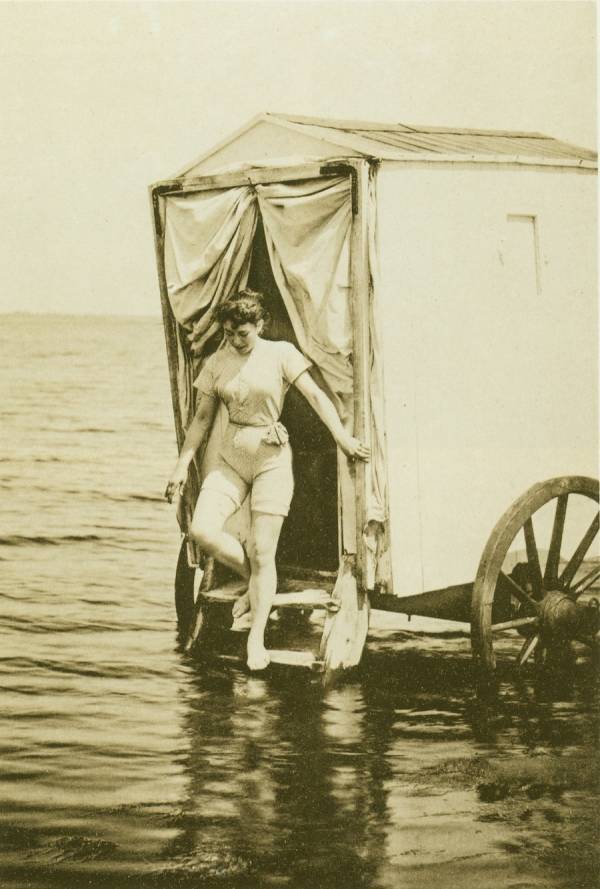 Bathing machines (seen above) were designed to protect the modesty of bathers. Pulled to the edge of the sea by horses, they were moved according to the tides. Would-be bathers then could enter the machine at the back fully clothed and emerge in a swimming costume straight into the sea. Photo: Flickr 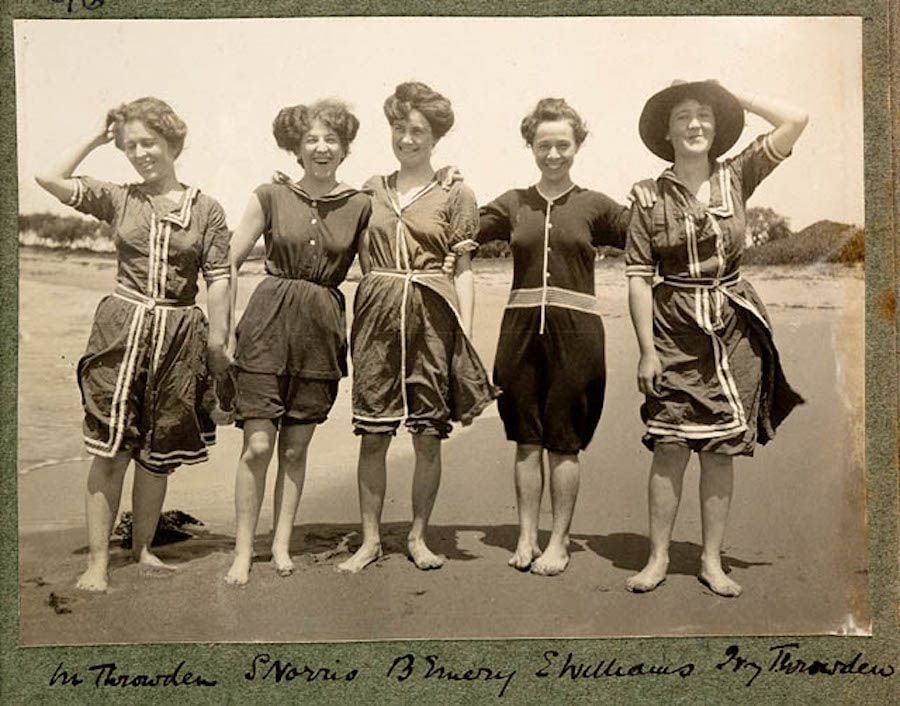 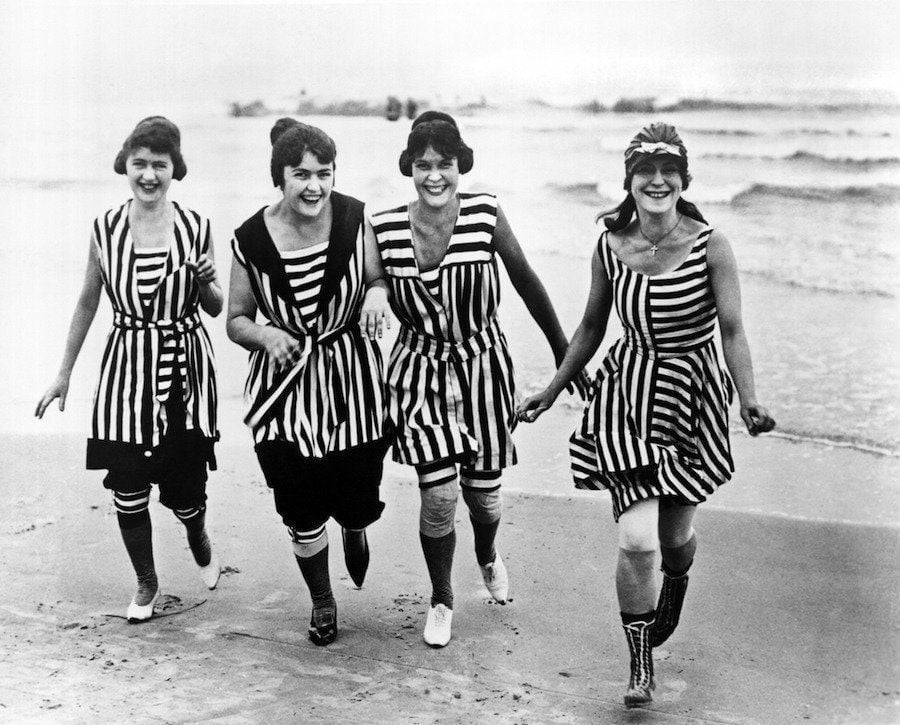 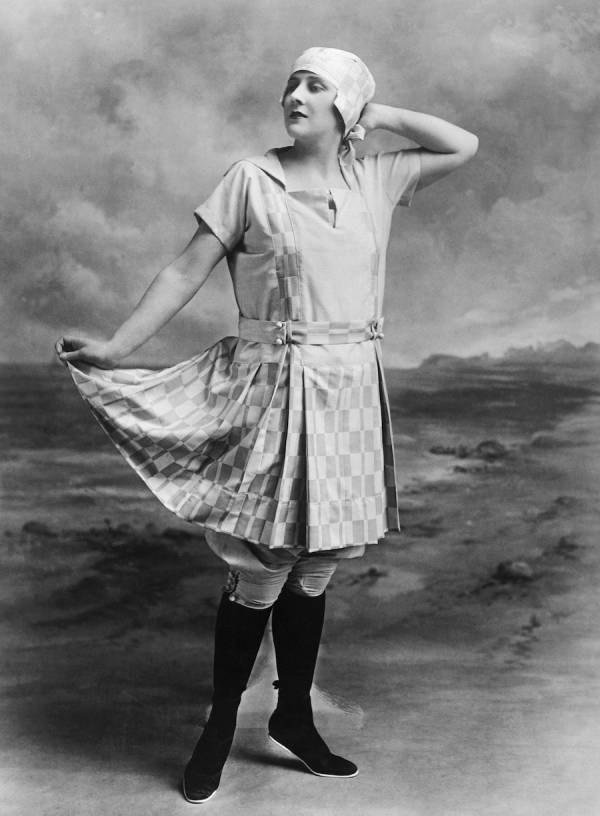 A woman models the latest in beach costumes in 1918. Photo: Bettmann/Getty Images 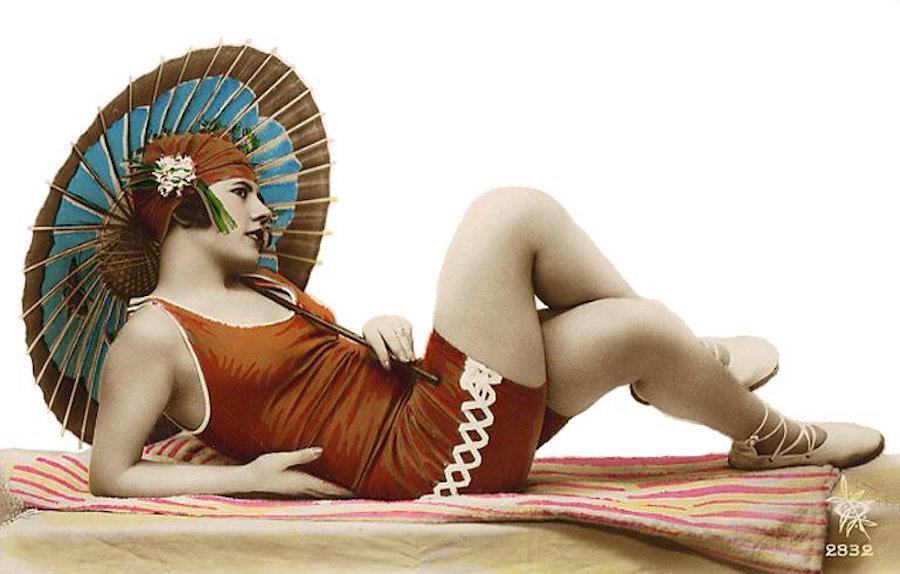 In the early 1900s, bathing suits no longer camouflaged the contours of the female body. The heavy fabrics were reduced to show a little more of the woman's figure and to allow for exposure to the sun. Photo: Wikimedia 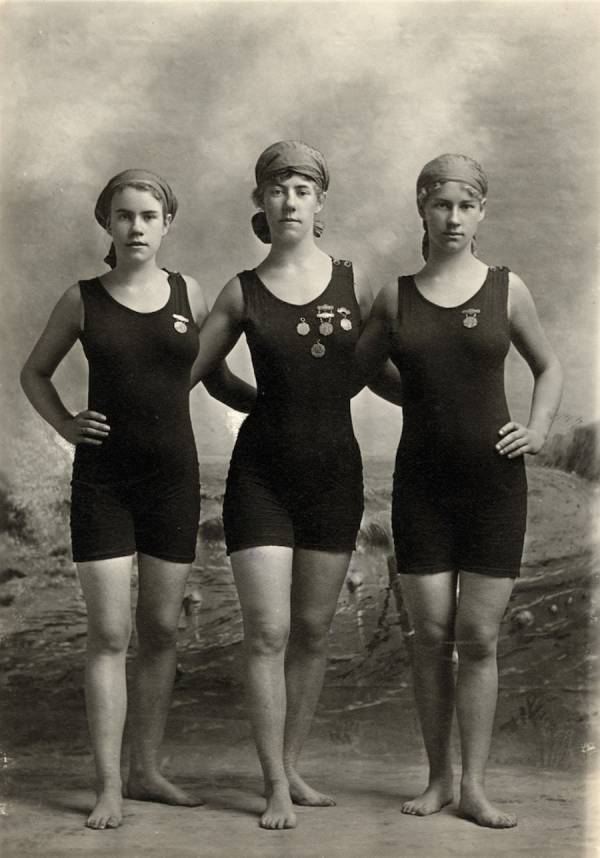 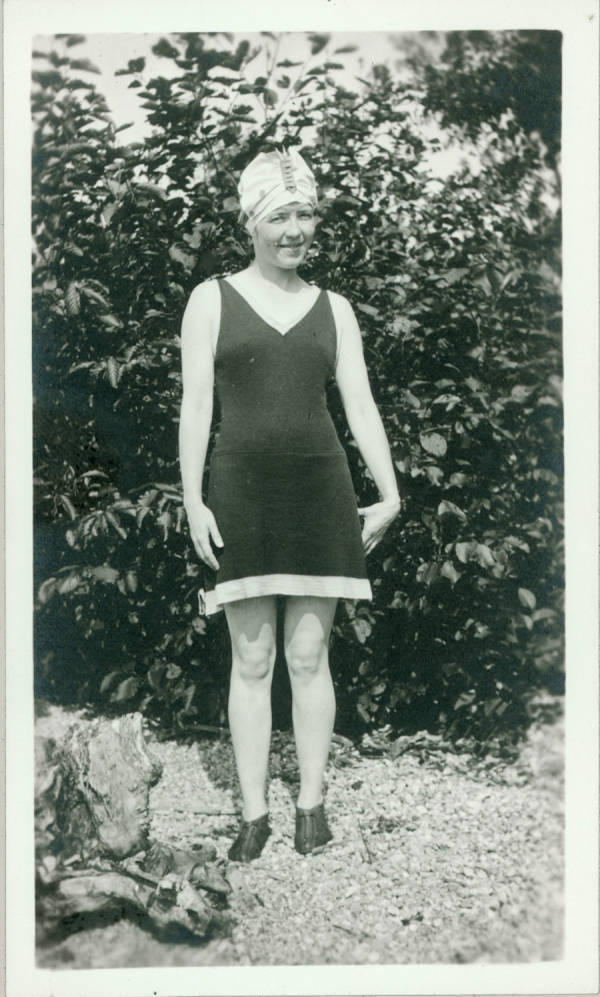 The one-piece garment seen above was the norm around 1910. Though matching stockings were occasionally worn, vintage swimwear began to shrink, exposing more and more flesh. Photo: Anyjazz65/Flickr 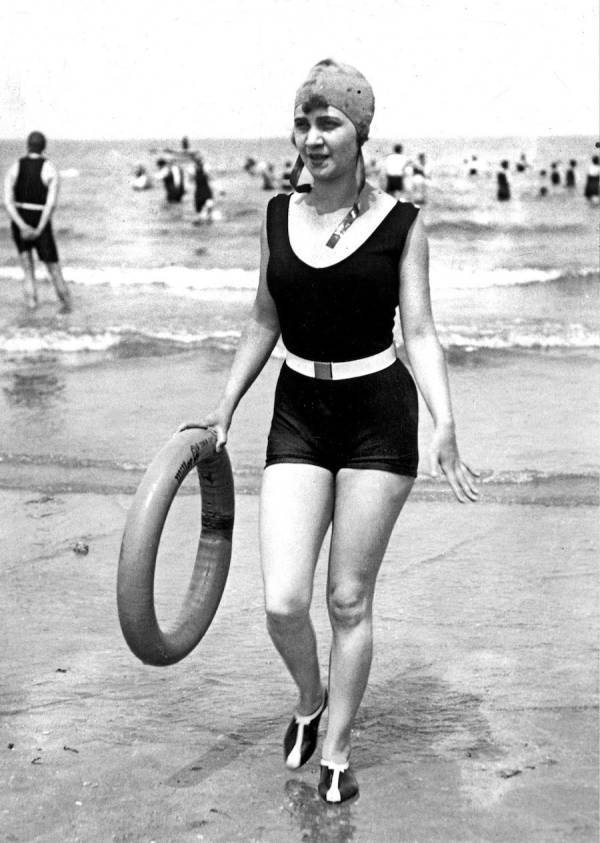 In the 1920s and early 1930s body hugging suits were in style. They were less restrictive and were cut at the upper thighs. Photo: STAFF AFP/Getty Images 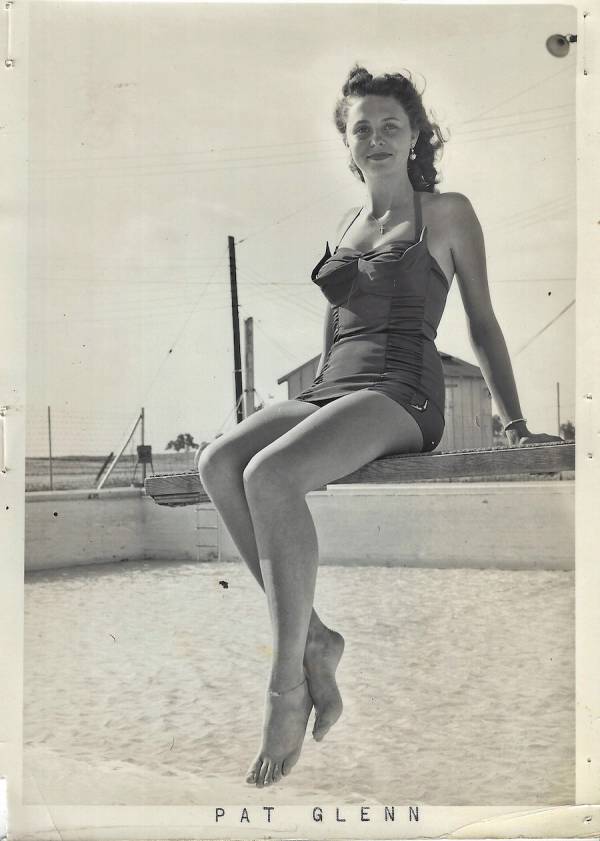 Filattering a woman's figure became the focus of the 1940s with elements like sweetheart necklines and ruching. Photo: Marion Hobbs/Flickr 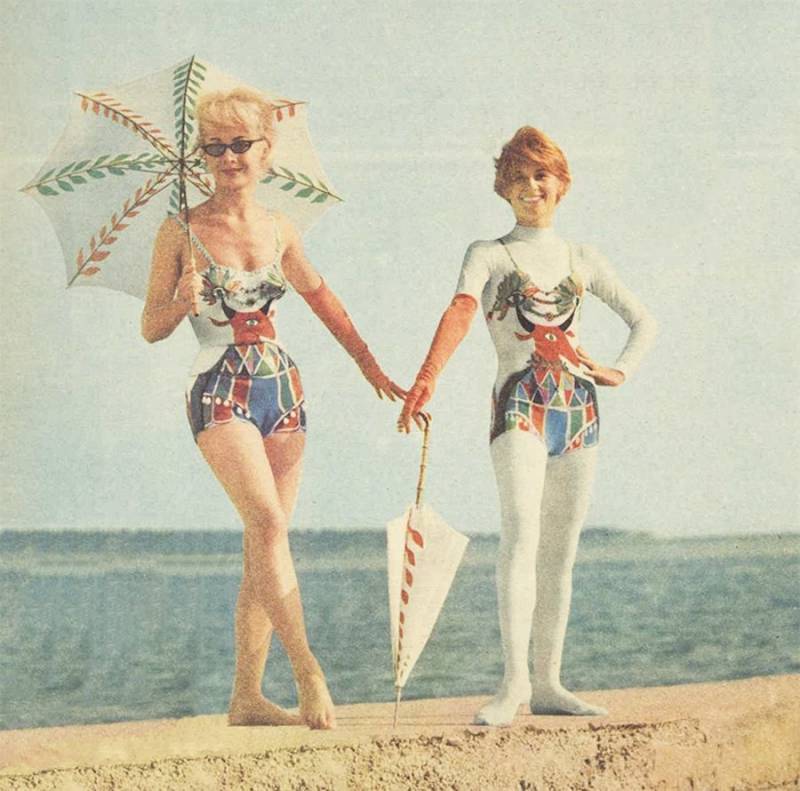 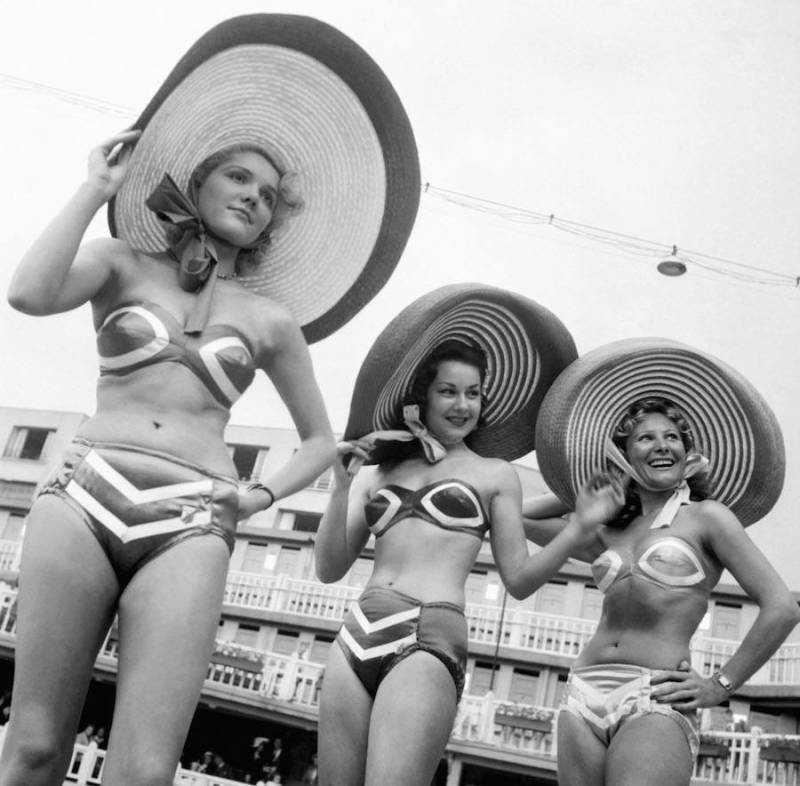 In 1946 the two-piece suit emerged. Necklines plunged at the back, sleeves disappeared and sides were cut away and tightened. Three swimsuit models present June 1951 at Paris Molitor open-air swimming pool the new two-piece bikini and matching pareos. Photo: AFP/Getty Images 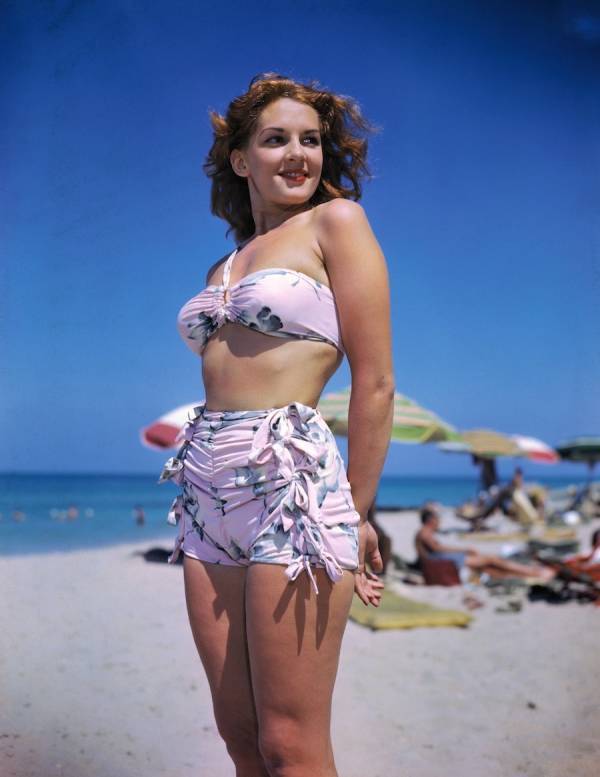 Frances Vorne, the model above, in a waist up photo wearing a bow tied bathing suit. Photo: Bettmann/Getty 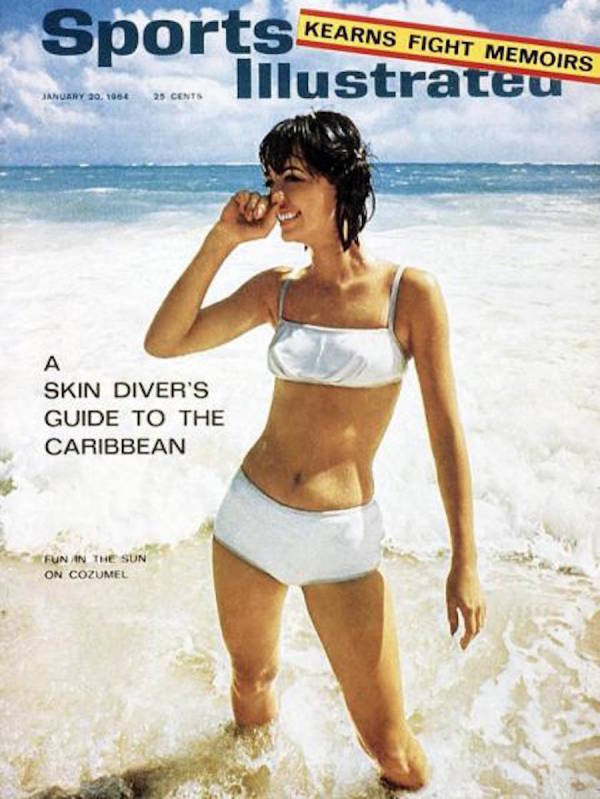 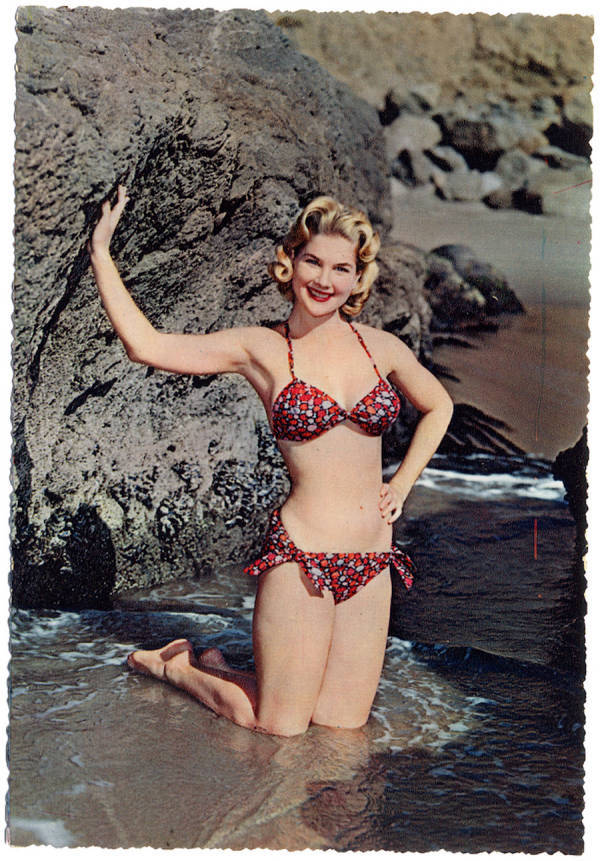 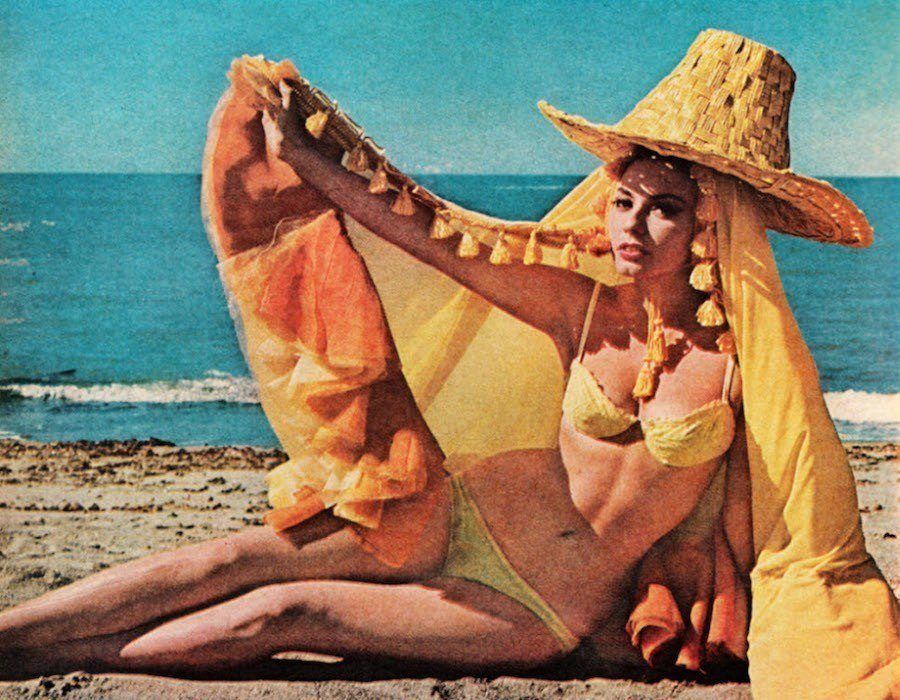 The early 1960s comprised the era of the SoCal-style beach party and the "itsy-bitsy-teeny-weeny-yellow-polka-dot bikini." Photo: Classic Film/Flickr 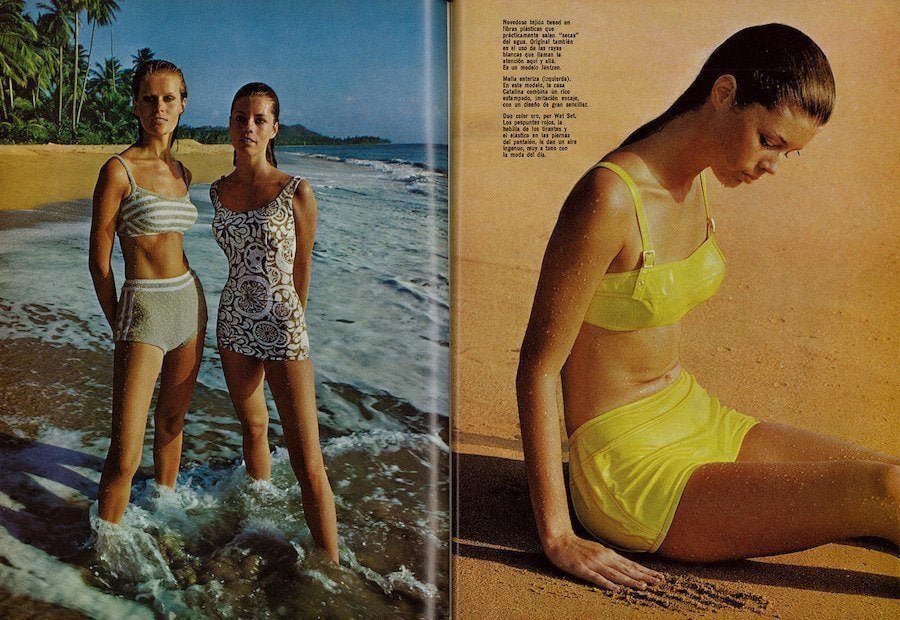 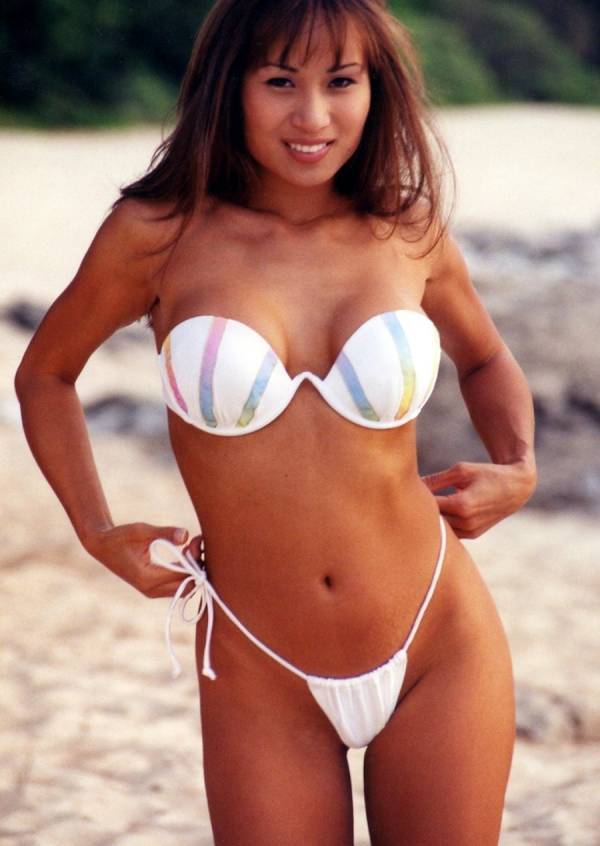 In the 1980s, high-cut bottoms were everywhere, making it no coincidence that Brazilian waxes were introduced to the U.S. in 1987. Photo: Carlton Abas/Flickr 2000 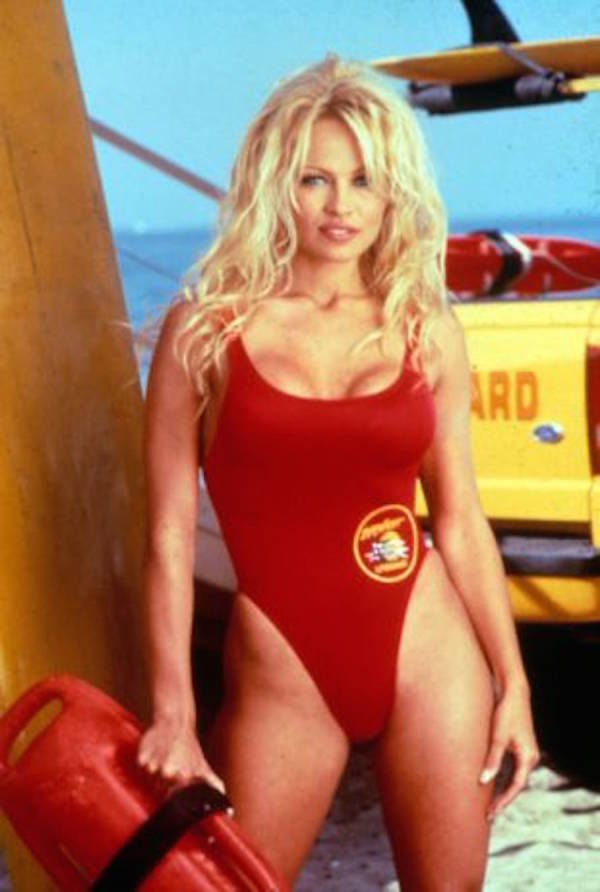 High-cut one piece swimsuits grew in popularity due to the popular show "Baywatch." The show ran in its original title and format from 1989 to 1999. Photo: NBC 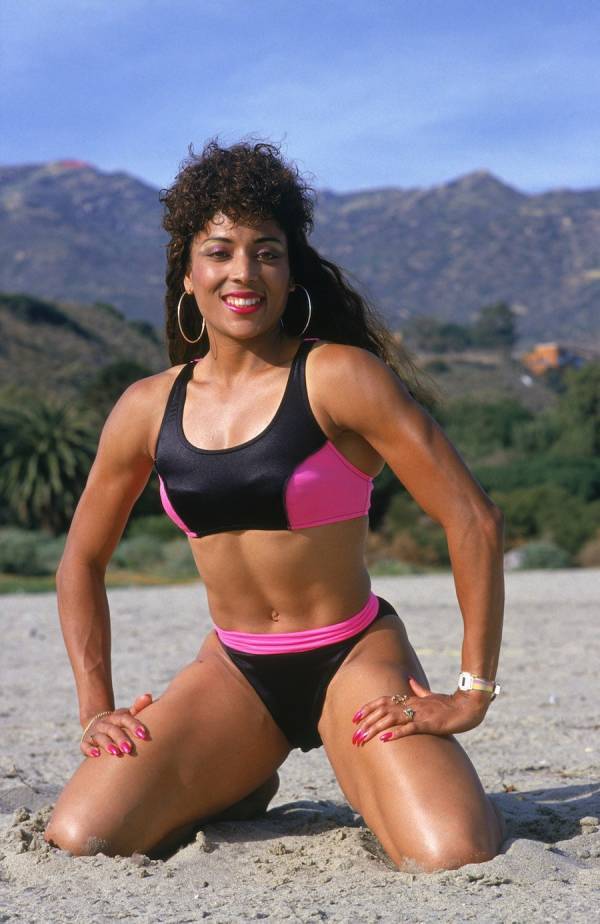 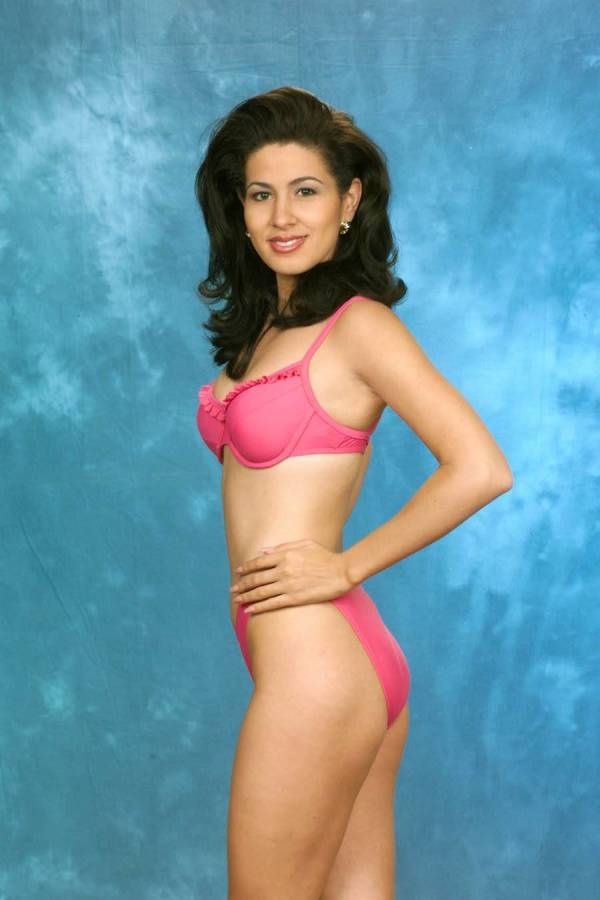 Pageant models, like Miss Nicaragua 1999 (above), have historically showed off their tans and big hair in skimpy bikinis. Miss Universe Organization/Getty Images 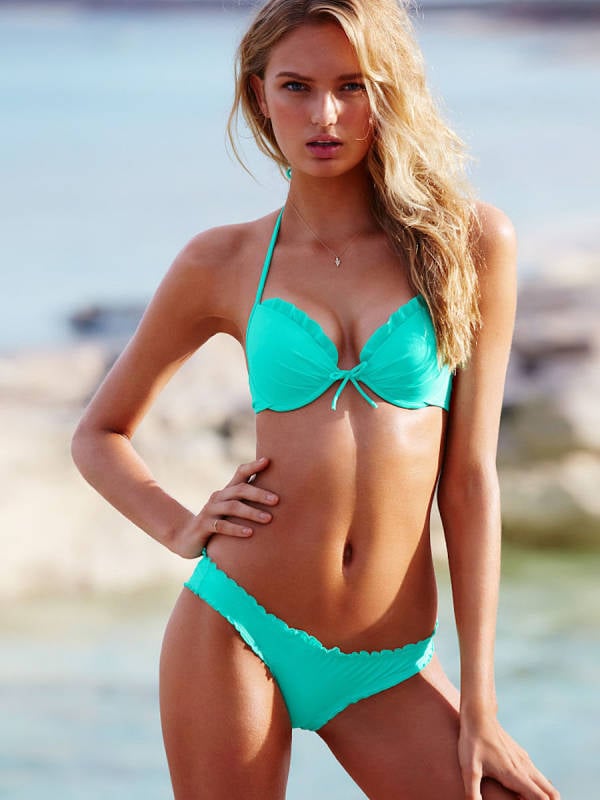 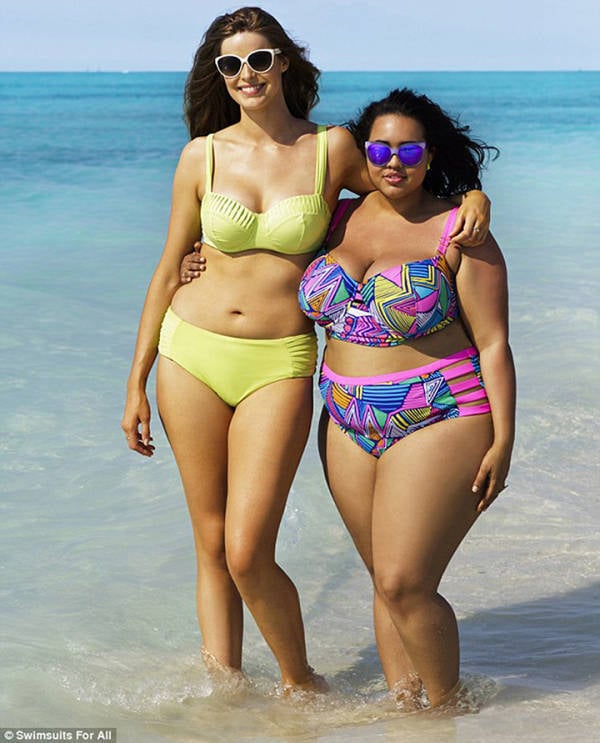 In today's stores, you can find swimsuits made for a wide range of body shapes promoting body acceptance. Swim Suits For All.

Be sure to watch the evolution of the bikini -- brought to you by model Amanda Cerny -- below:

If you enjoyed this, be sure to check out the history of high heels and this video cataloging 100 years of beauty in under one minute.