The Strange Life (And Even Stranger Death) Of Edgar Allan Poe

As these eerie Edgar Allan Poe facts reveal many elements of the gothic writer's life were just as mysterious and intriguing as his work. 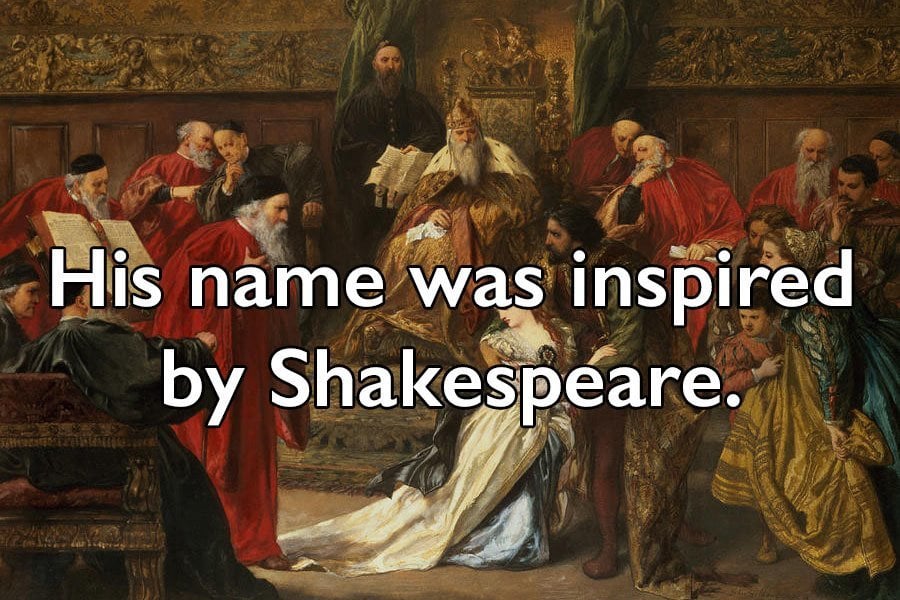 It is quite possible that Edgar Allan Poe is named for the character Edgar in William Shakespeare’s King Lear (depicted above). Poe’s parents were both actors and were in a production of the play shortly before his birth.Wikimedia Commons 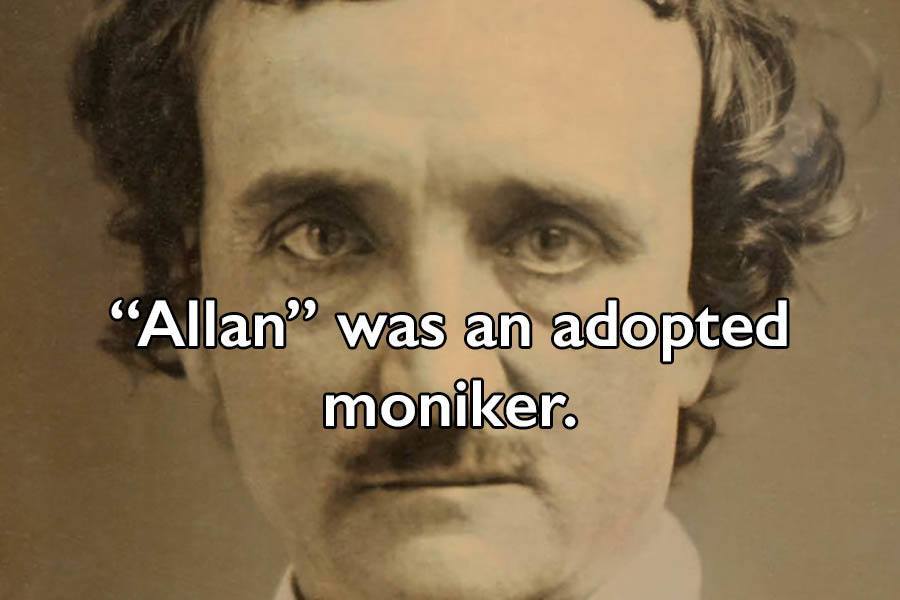 Poe’s middle name, Allan, was not given to him by his biological parents, but instead came from John and Frances Allan – who took him in at the age of two after his father abandoned him and his mother died.Wikimedia Commons 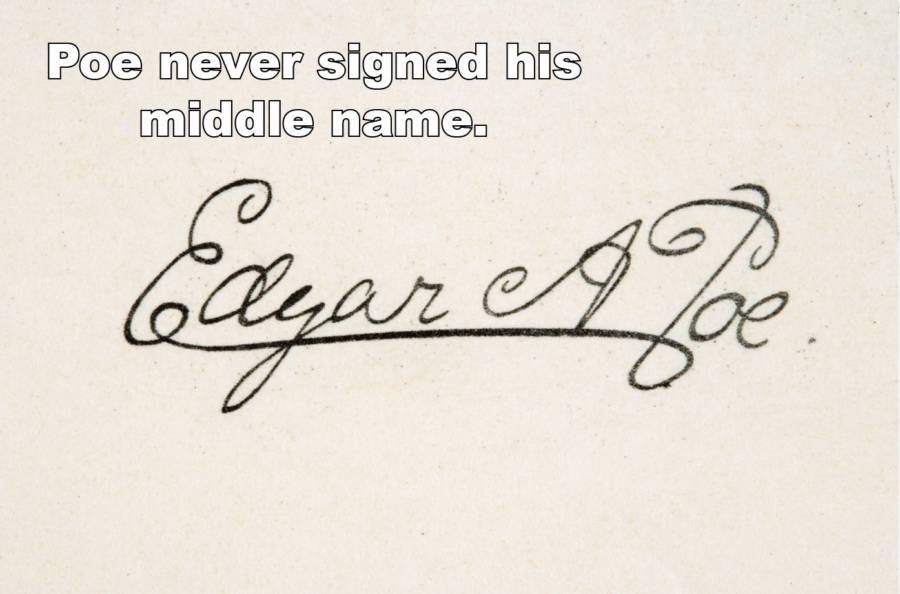 Because of his unpleasant relationship with his foster family, he never signed the name Allan. Wikimedia Commons 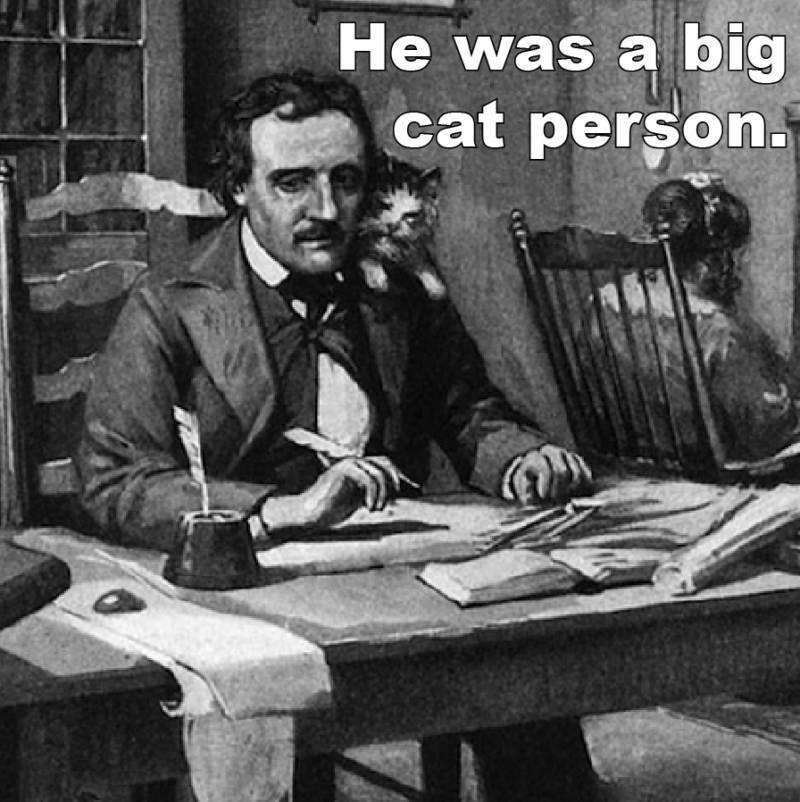 Poe often worked with a cat on his shoulder. After hearing of Poe’s death, his mother-in-law discovered that his beloved feline friend, Catterina, had also died.Edgar Allan Poe Museum 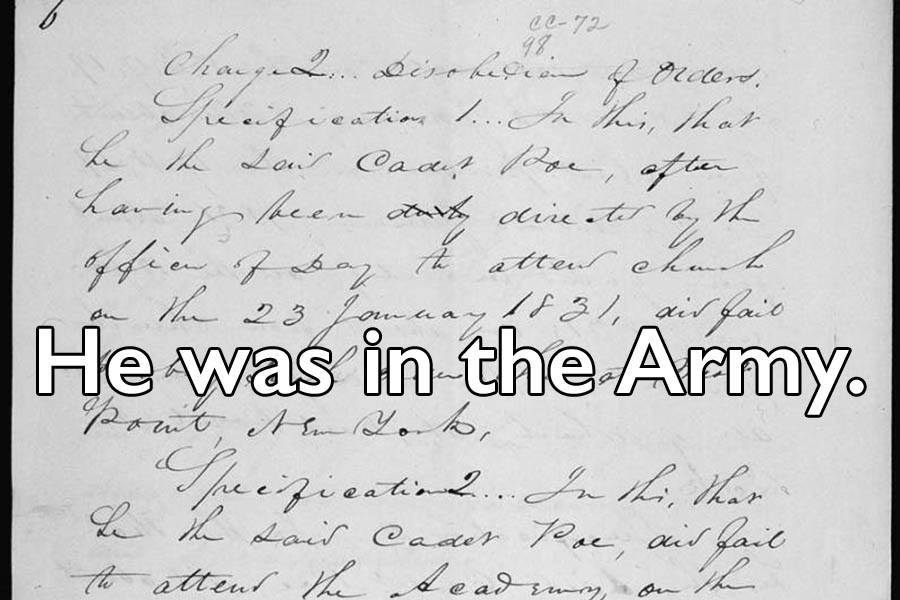 Poe joined the United States army in 1827 under the false identity of Edgar A. Perry. He claimed to be 22, even though he was just 18 at the time.

He did this in order to prevent his foster father from locating him; they never got along with each other, and Poe was looking to escape their troubled relationship. He ended up disclosing the identity lie, and was honorably discharged.

Pictured is an excerpt from the court proceedings that led to Poe's honorable discharge.Wikimedia Commons 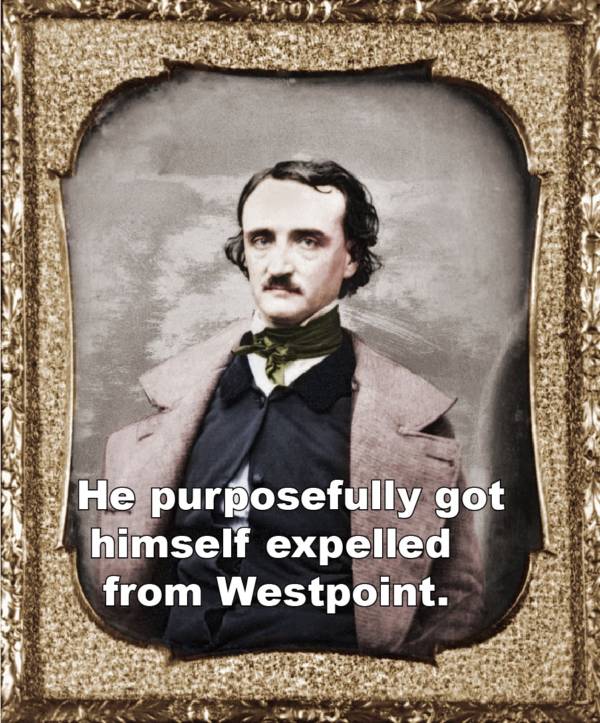 Though an excellent student, Poe did not enjoy West Point. But his foster father wouldn't let him quit, so he had to get himself expelled.

By the time they kicked him out, Poe had collected 200 offenses and demerits. He had also convinced classmates to each donate a dollar to finance his new book of poems, which he'd later dedicate to them.Bettmann/Contributor/Getty Images 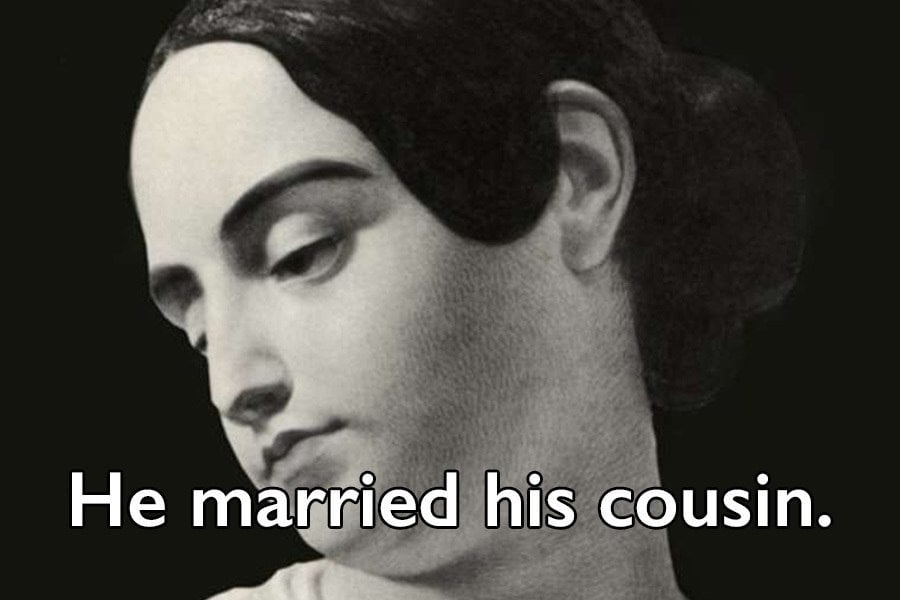 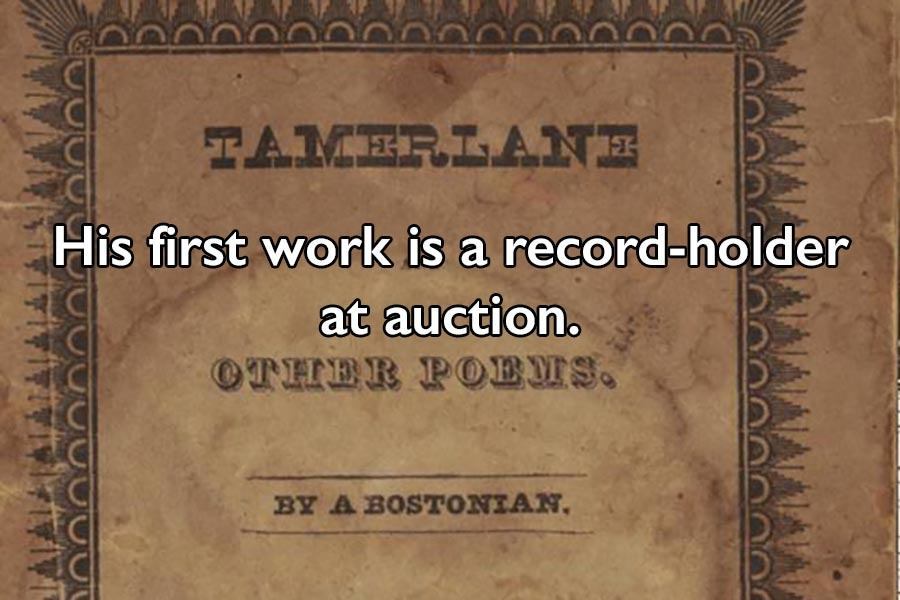 One of only 12 existing copies of Poe’s first published work, 1827’s Tamerlane and Other Poems, sold at a 2009 auction for $662,500 — a record for a piece of American literature.Wikimedia Commons 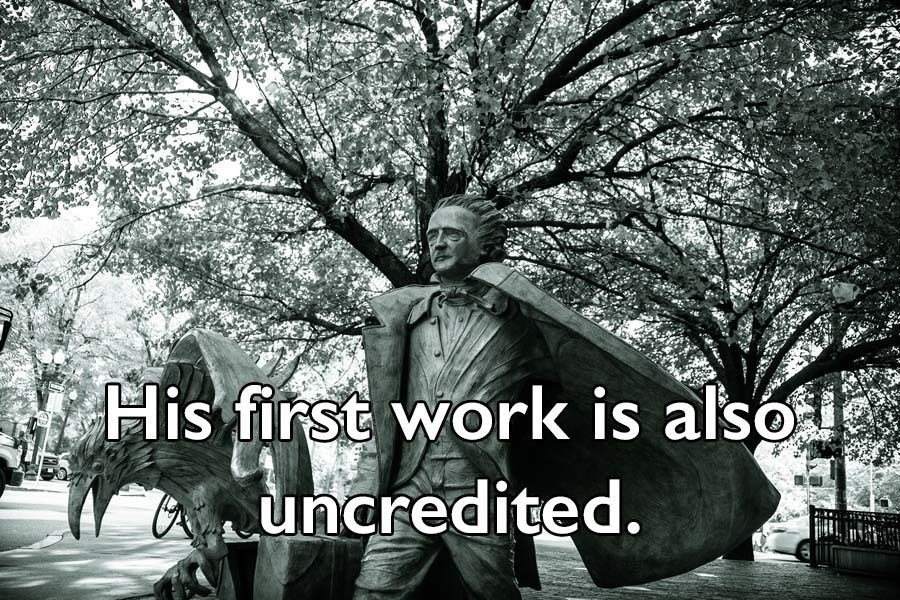 Tamerlane and Other Poems doesn’t even carry Poe’s name; instead it is credited to “A Bostonian,” which was another attempt to prevent his foster father from ascertaining Poe's whereabouts.Wikimedia Commons 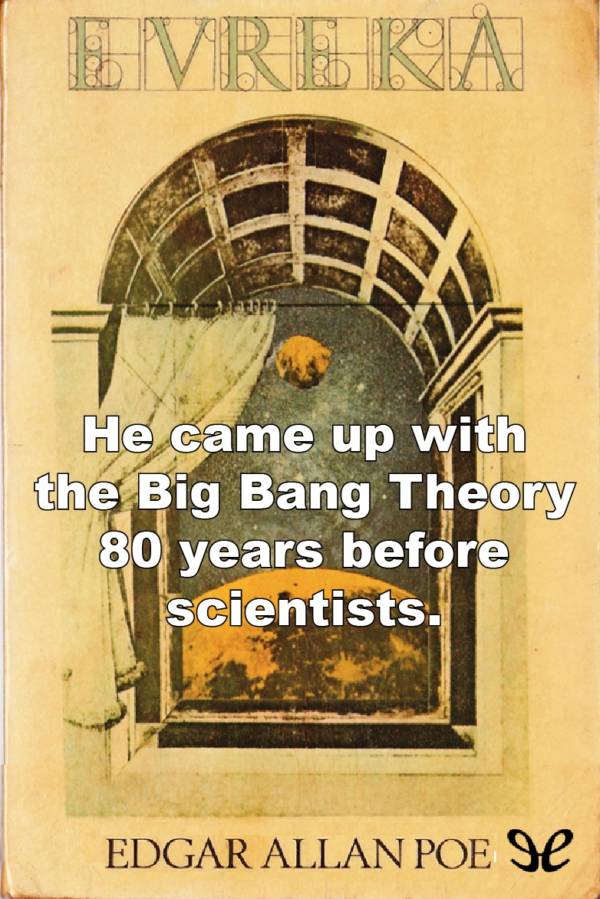 In “Eureka,” a 150-page poem from 1848, Poe basically predicted what would become science’s best guess at how the universe was created. He considered this work to be his masterpiece.Public Domain 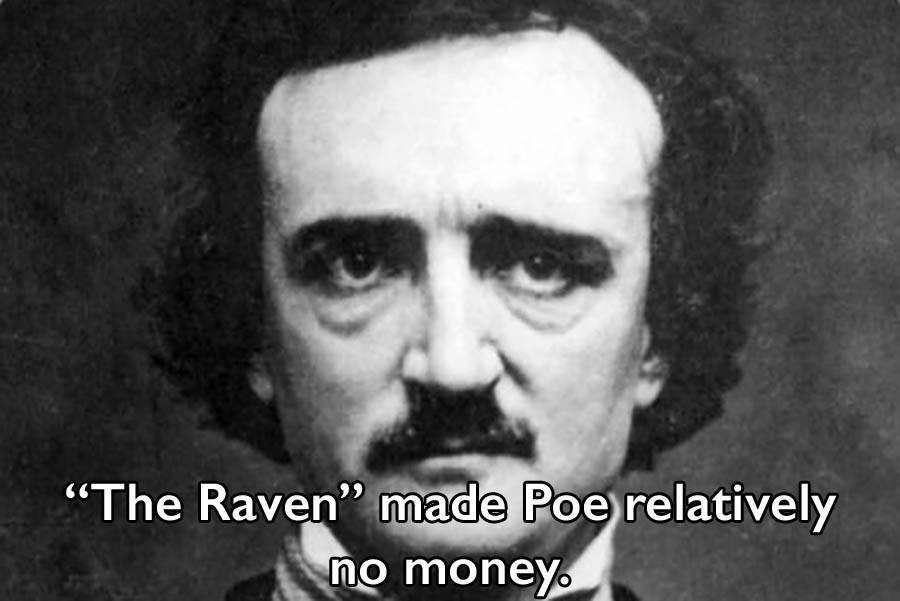 Poe’s most famous work, "The Raven," was not quite the money-maker you might expect. The magazine American Review paid the author $9 for the rights to print what would become one of the most recognized poems of all time.Wikimedia Commons 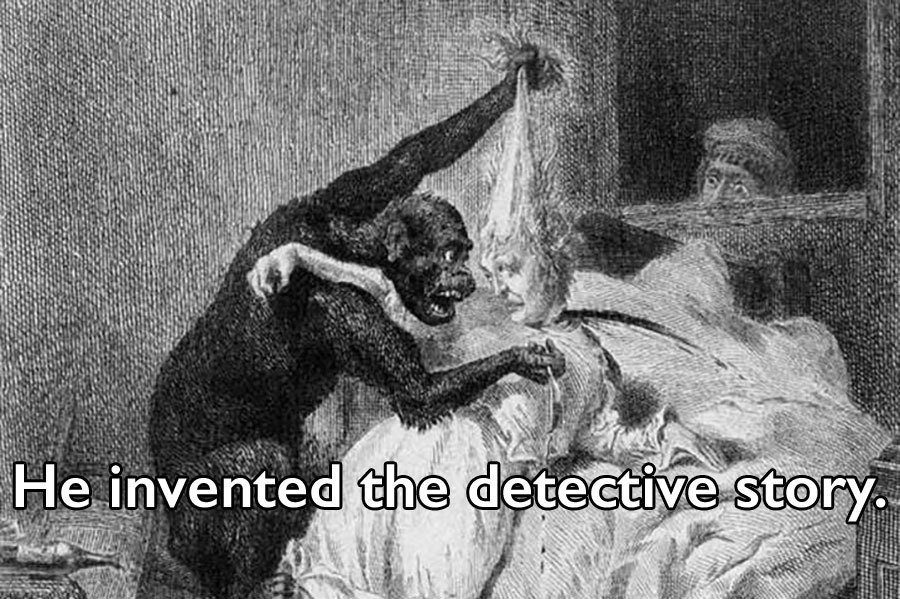 His 1841 story, "Murders in the Rue Morgue," is credited with creating the modern detective story. The lead character of Mr. Dupin was the inspiration for many literary detectives to follow, including Sherlock Holmes and Hercule Poirot.Wikimedia Commons 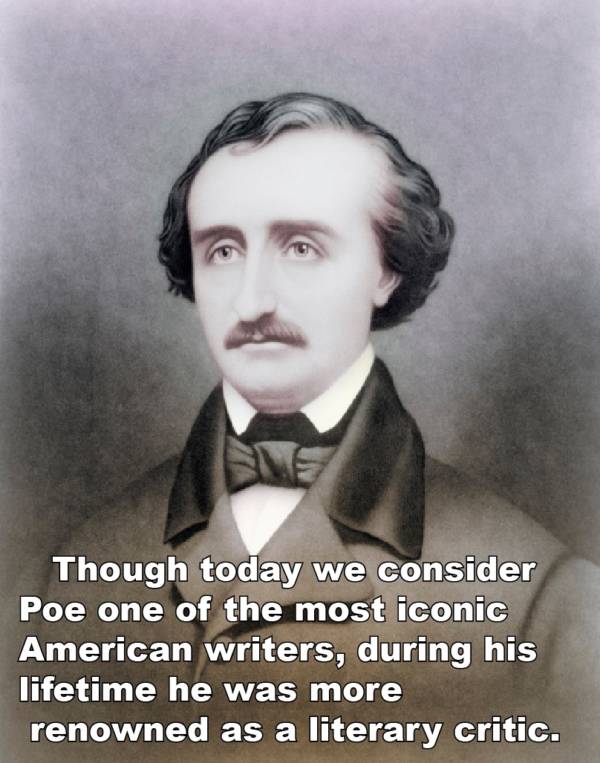 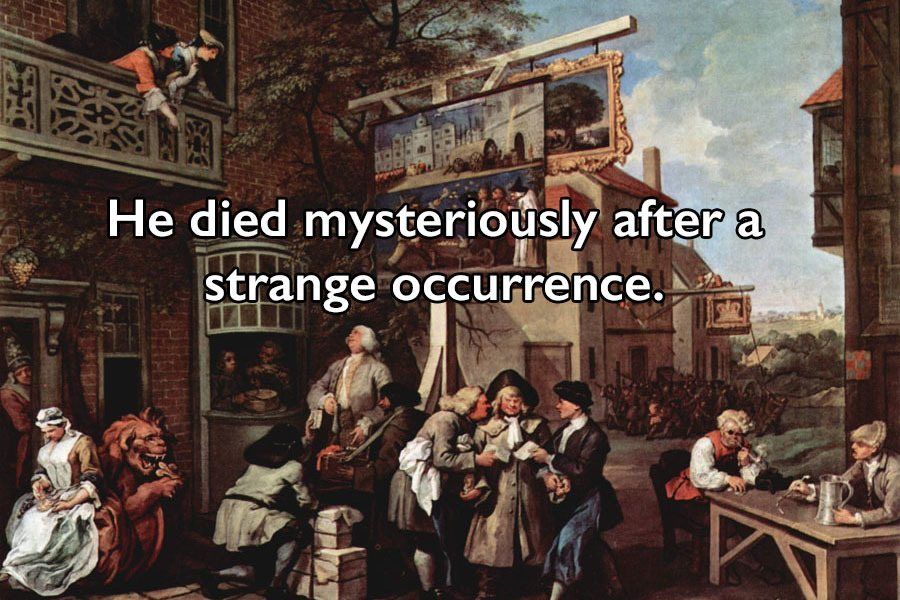 In the days before his death, Poe was found at a tavern, Ryan’s Fourth Ward Polls, on the day of a Baltimore city election. The writer was incoherent, “in great distress,” and wearing the clothes of another man.

These facts lead many to believe that Poe had been a victim of cooping (depicted here), a common practice of the time where unwilling people were taken from the streets, intoxicated or drugged, then taken from one polling location to another to manipulate the vote for a certain candidate.

The writer was taken to Washington Medical College where he would die four days later.Wikimedia Commons 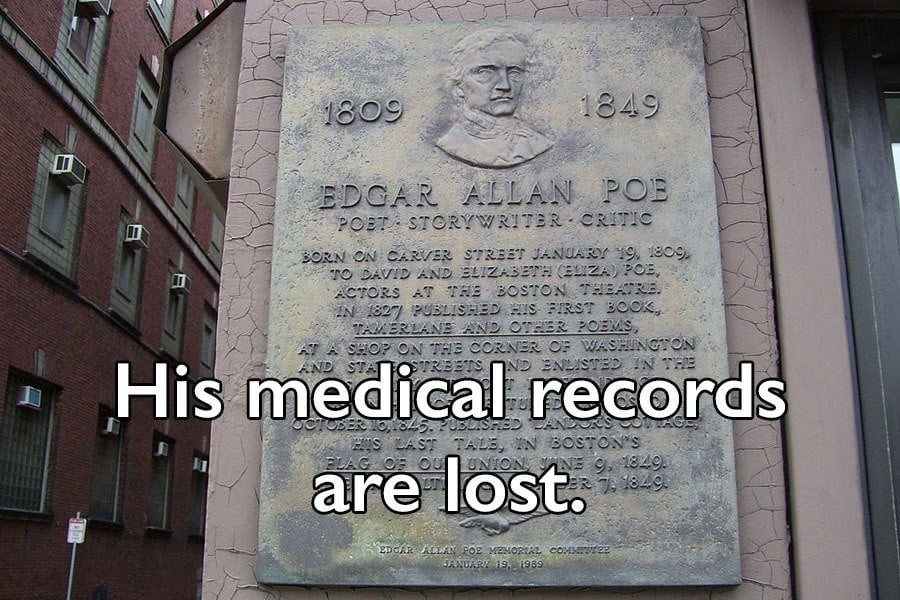 There are many theories as to the true cause of Edgar Allan Poe’s death, but no one really knows the circumstances of the poet’s demise. All medical records and even Poe's death certificate have been lost to time.Wikimedia Commons 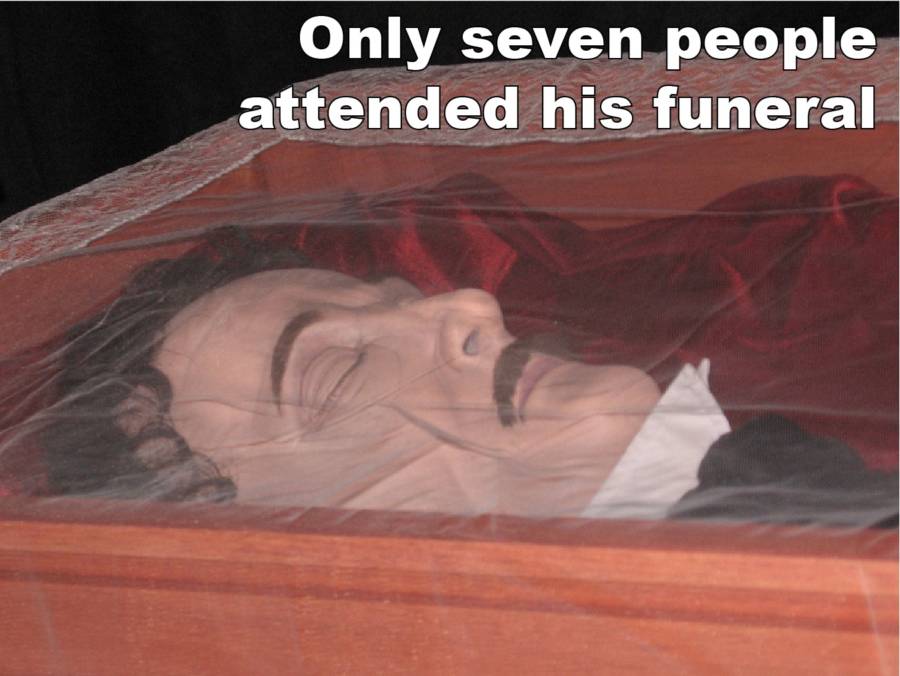 Though he was famous in America at the time, his cousin forgot to tell people that he had died. The ceremony lasted only three minutes. Edgar Allan Poe Museum 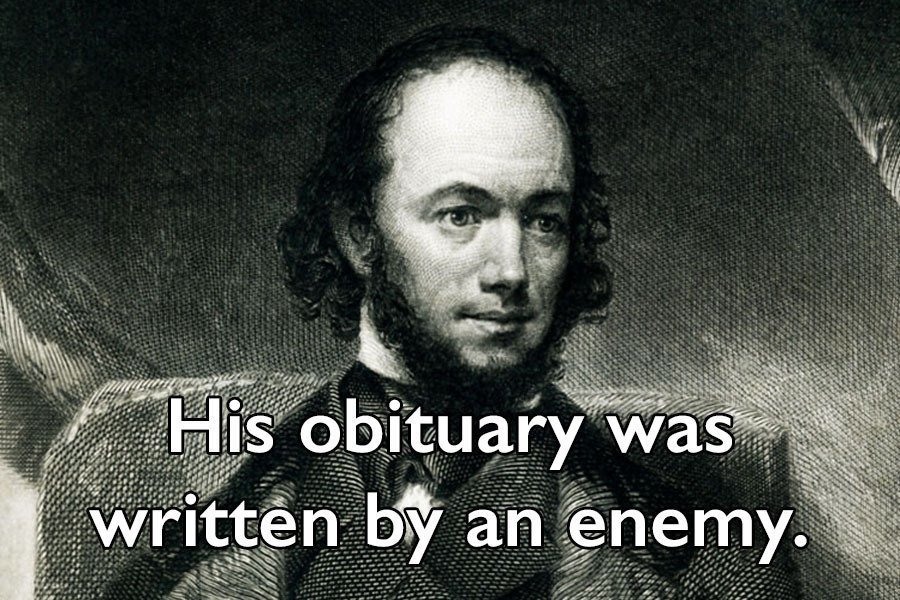 Edgar Allan Poe’s obituary was written by his professional and personal rival, Rufus Wilmot Griswold. Griswold wrote a scathing and libelous account of the deceased poet’s life, signing it with the name “Ludwig” in an attempt to conceal his identity.Wikimedia Commons 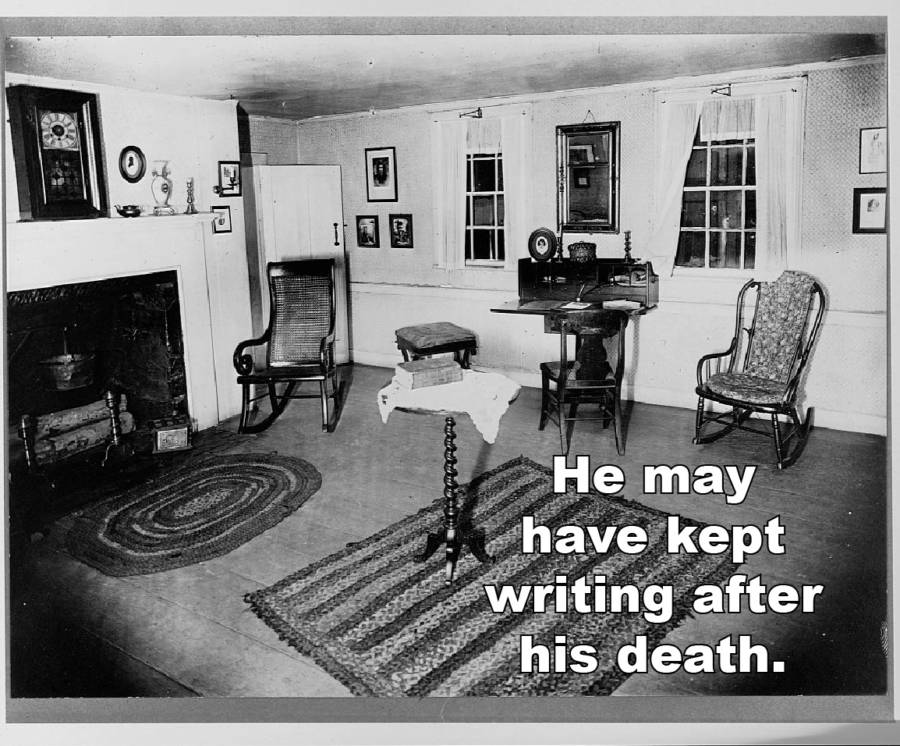 Poet and spiritual medium Lizzie Doten claimed that Poe’s spirit stuck around for awhile after his death, kindly helping her write several pieces. She also got a hand from the ghosts of Shakespeare and Robert Burns, she claims. 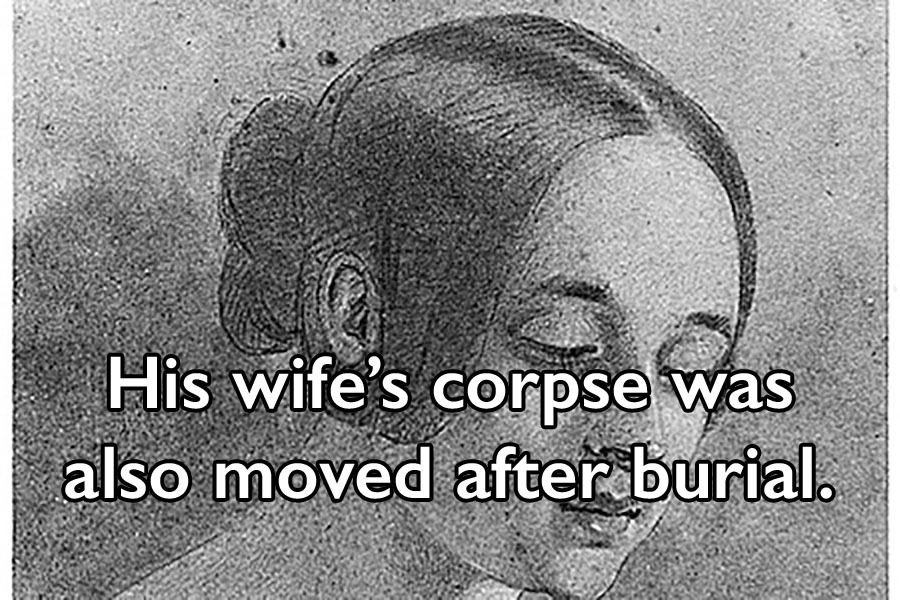 Nearly 40 years after his death, the remains of Edgar Allan Poe’s wife, Virginia, finally made their way to be interned beside her husband. It was a strange journey: one of the writer’s biographers, William Gill, had acquired her bones and kept them under his bed in a box for a number of years before eventually sending them to Baltimore to be buried next to her husband.Wikimedia Commons 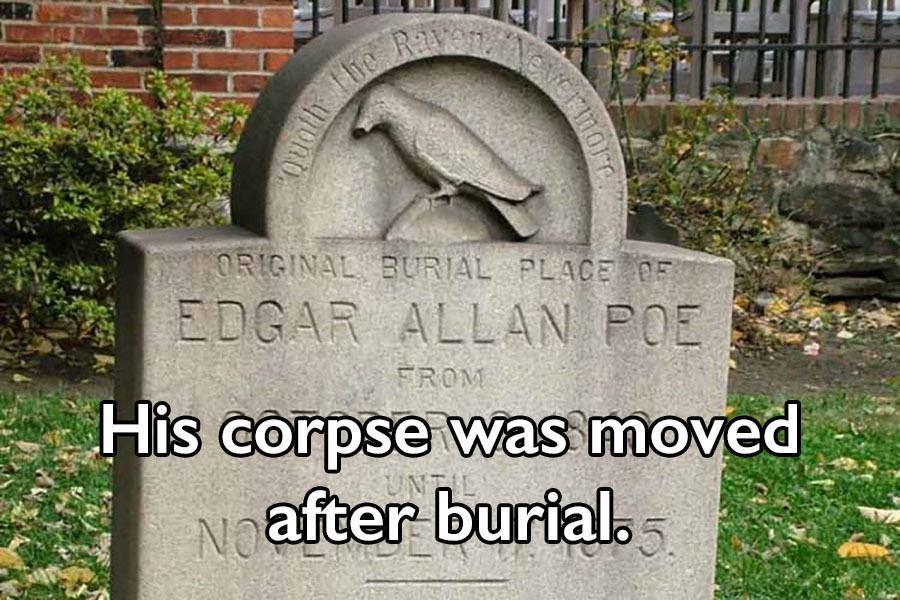 Poe’s body was moved 26 years after his death. Originally buried in an unmarked grave at his grandfather’s family plot, his body was then moved to a coveted spot at the Westminster Burying Grounds in Baltimore. The first burial plot now contains a marker to identify where the author once rested.Wikimedia Commons 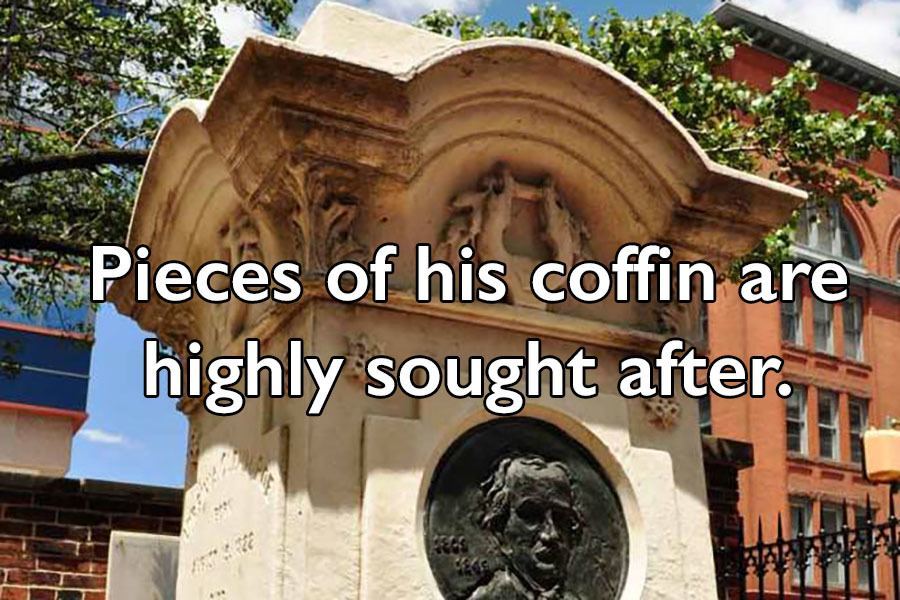 While moving his body to its new resting place, Poe’s coffin broke apart, exposing the writer’s remains to those in attendance. Pieces of the coffin became prized collector’s items.Wikimedia Commons

It's no wonder that Edgar Allan Poe wrote such sad stories; the guy lived a depressing life.

From his parents abandoning him to his wife's premature death to the mysterious end of his own life, bad luck seemed to follow him like a curse.

Even so, he managed to secure a lasting spot as one of the most iconic writers in history.

Almost everyone recognizes his name and can name at least one of his works, but we bet most people don't know these weird and fun facts about America's favorite pessimist.

Enjoy these Edgar Allan Poe facts? Next, read up on the history of immurement, the process of being sealed into a small room and left to die, as described in one of Poe's most famous stories. Then, take a look at these 15 lesser-known Kurt Vonnegut facts sure to fascinate any literature buff. Then, learn more about the incredible life of Edgar Allen Poe.