Where you see a jagged rock, Stuart Hill sees opportunity called the country of Forvik.

The tiny, wind-battered rock off the coast of Scotland doesn’t look like much. It’s jagged and difficult to reach — mostly used as a resting place for the occasional seal or seagull.

But one man has decided that this blip of an island is actually his own sovereign nation — the joyful land of Forvik.

74-year-old Stuart Hill’s 2008 declaration of Forvik independence has caused an interesting debate on the Shetland Islands.

“We, the sovereign people of Forvik, hold these truths to be self-evident,” Hill’s familiar-sounding proclamation begins. “That all men have equal rights, that they are endowed by their Creator with certain inalienable Rights, that among these are Life, Liberty and the pursuit of Happiness.”

Though most people see the power grab as ridiculous — no one can just decide to rule a country, right? — in the context of Brexit and the threatened unraveling of the European Union, there are some who look at the man nicknamed “Captain Calamity” and are surprised to find themselves thinking:

“There’s a feeling in Shetland that everybody is working and we are paying into the pot, and we are getting shortchanged,” Shetland local Gary Smith told The New York Times, empathizing with Hill’s desire for sovereignty.

Smith did add, though, that Hill is “probably about 400 years too late with his argument.”

Hill found himself in Shetland after he shipwrecked a 15-foot boat in 2001. The nine lifeboat call-outs and one helicopter rescue before this final crash are what earned him his nickname.

Once stranded, Forvik’s future first minister decided the rock and, indeed, the Shetland islands themselves were not legally a part of Scotland or Britain.

Scotland’s claim to the territory, Hill says, is actually “a gigantic fraud that has been hatched and perpetrated at the highest level for centuries.”

The 1469 contract between Christian I of Denmark and James III of Scotland, Hill says, never technically changed the islands’ ownership.

There “probably is a doubt as to the constitutional status of Shetland,” said Robinson, who would like to see more autonomy for the region himself. But Hill’s “antics over time have grown to irritate people.”

Police have so far confiscated three cars from Hill after he drove around Shetland with Forvik license plates. Arguing the validity of the charges, Hill spent 28 days in prison and even engaged in a short-lived hunger strike. He stopped paying his taxes and built a structure on the island without the proper permits. 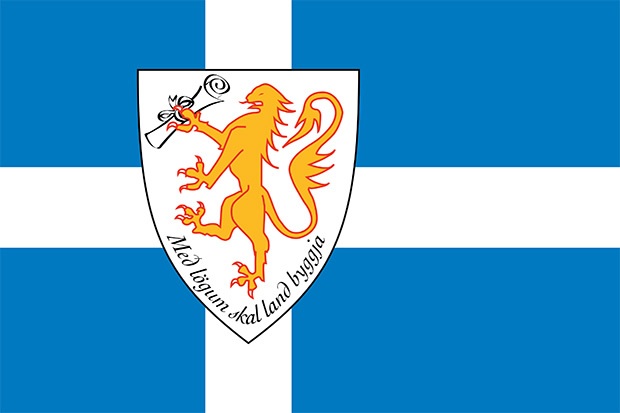 Forvik websiteThe Forvik Flag, which reads ‘With laws the land will be built.’

The building, though still standing, isn’t homey. Even for a skilled seaman, the land of Forvik would be pretty hard to get to. So Prime Minister Hill only visits his country about twice a year.

Forvik’s real purpose, Hill argues, is not to actually operate as a country, but to challenge the UK to explain why they have a right to control Shetland.

“The long term aim is to show other communities, regions and nations that their politicians are there to represent, not to rule them,” the country’s website reads. “And that their destiny is in their own hands.”

Along with offering a tax-free citizenship, banking and financial services and duty-free goods in all local shops (there aren’t any), Forvik claims to have the “first truly valid constitution in the world” because every member of the country has signed it.

As more and more Europeans seem to support more localized governing, it’s unclear what a map of the continent will look like in the coming decades. Even now, zooming very, very far on Google maps, people will be able to find a dot named Forvik.

“There are a lot of people who support what I do, because they know that my heart is in Shetland,” Hill said. “There is the other side that think I’m just a complete nutter, and that I should go away and mind my own business.”

Next, read our series of interviews with people who have decided to make their own countries: the ruler of Zaqistan, a country in the middle of Utah, the Virginia farmer who became king of “North Sudan”, and the president of Liberland, a Tea Party paradise in Europe.