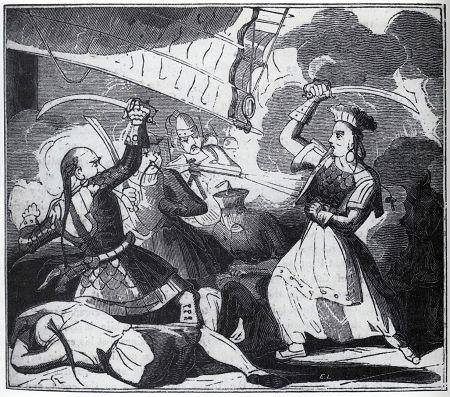 Born in 1775, Ching Shih grew up in the Guangdong province of southeastern China, where at one point she worked as a prostitute on a floating brothel.

In 1801, the famed Zheng Yi, pirate commander of the Red Flag Fleet, raided the brothel, and was so struck by Shih’s beauty that he asked her to marry him. Shih said yes to Yi’s proposal, but only after Yi agreed to give her equal partnership in fleet leadership, as well as 50 percent of the admiral’s share of anything attained.

Just six years after marrying Shih, Yi fought his last fight amid the Tay Son Rebellion in Vietnam, where he died in 1807. Seeing an opportunity to rise to power, Shih then took command of the entire squadron.

Shih’s fleet went on to pillage the south China coast, taking over several towns and taxing countless others. Also under Shih’s rule, the fleet would sink 63 Chinese government vessels, which prompted the British and Portuguese navies to stay out of her affairs.

Three years after Shih assumed rule over the Red Flag Fleet, the Qing emperor, seeing no way to curb the pirate fleets, offered amnesty to anyone willing to give up their pirating ways and return to the mainland.

She returned to civilian life, bringing with her the vast wealth she acquired from her piracy (as well as one of the most interesting stories in recorded history). She then went on to marry a former underling, Pao. Together they returned to the Guangdong province, where Shih opened and operated a gambling house until her death in 1844.

After reading these interesting stories, discover interesting people that the history books somehow largely forgot. Then, have a look at interesting words with origins that most people don’t know.