Views From The Sidewalk: New York City Street Scenes In 1896 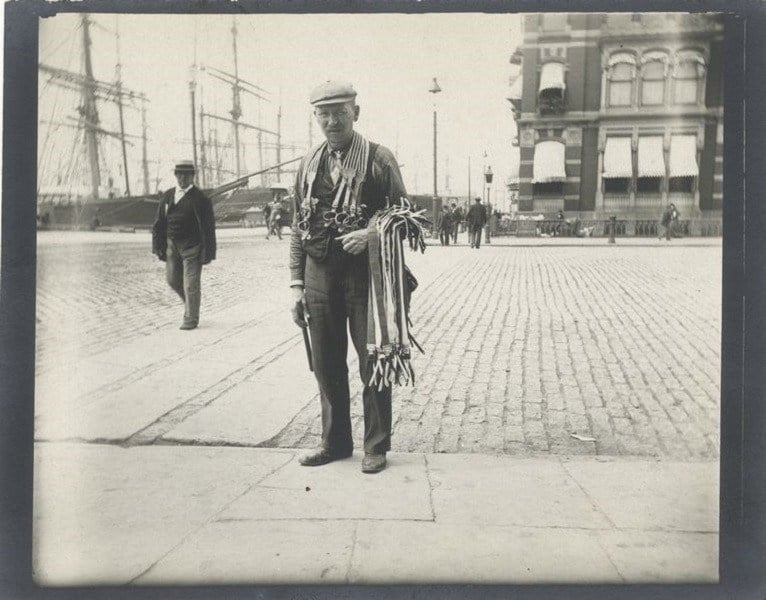 A man sells suspenders on the sidewalk. Street peddlers provided cheap goods to the most densely populated, lowest income neighborhoods. They faced little resistance from the city, as it had not yet established guidelines for commercial ventures on the streets and sidewalks. Around the 1890s, the city began licensing street vendors as businesses.NYPL/Alice Austen 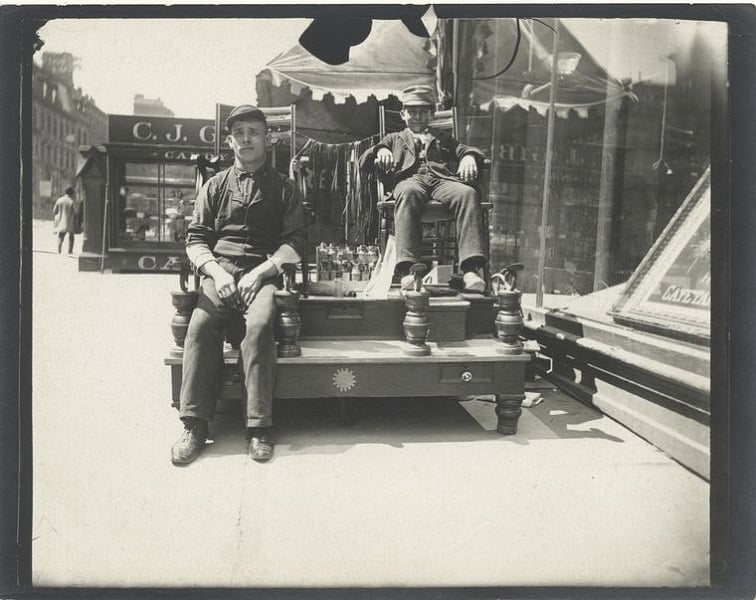 Boot blacks waiting for customers at their streetside stall. Young, impoverished boys shined the shoes of wealthy Manhattanites as a way to earn a living, along with all the other peddlers and vendors crowding the sidewalks. NYPL/Alice Austen 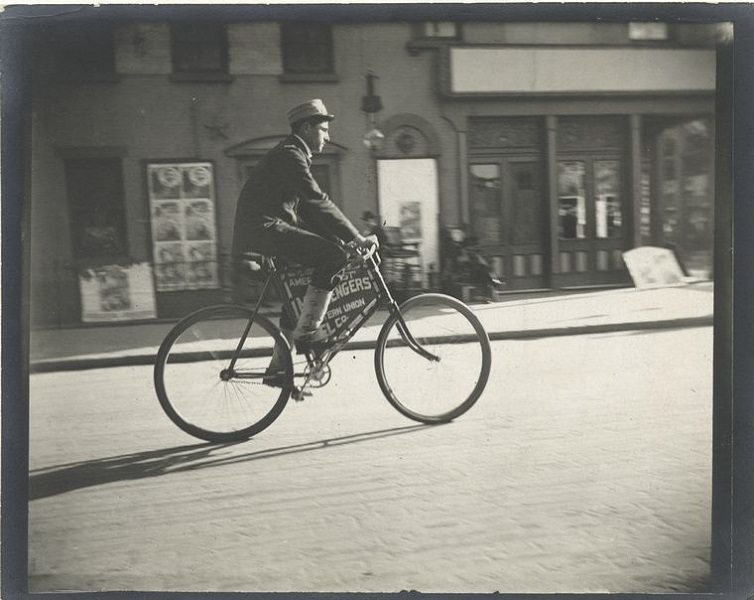 A bike messenger. In the 1890s, the United States experienced a bicycle boom," when bikes became safer and easier to ride. In New York City, Western Union hired bike messengers like this one to deliver telegraphs. NYPL/Alice Austen 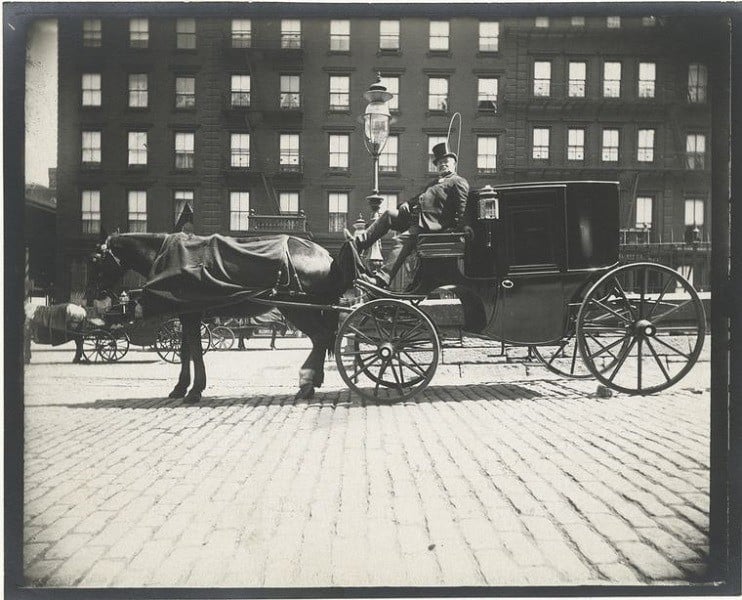 A hansom cab driver relaxes between fares. The Hansom Cab Company was originally established to provide transportation between New York City and Brooklyn in 1869.NYPL/Alice Austen 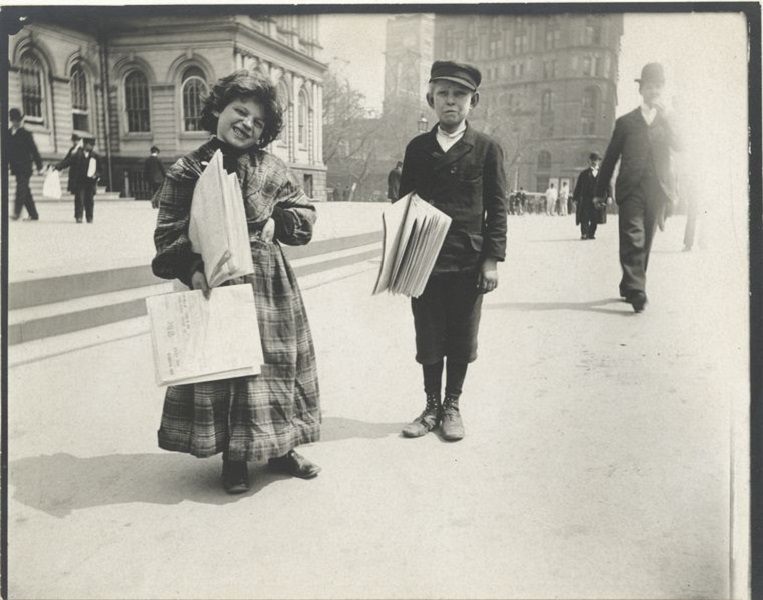 Many children who sold newspapers on the New York City streets were homeless immigrants. These street urchins became such a boon to the city that in 1853, the Protestant minister who founded the Children's Aide Society created a lodging house specifically for vagrant newsboys.NYPL/Alice Austen 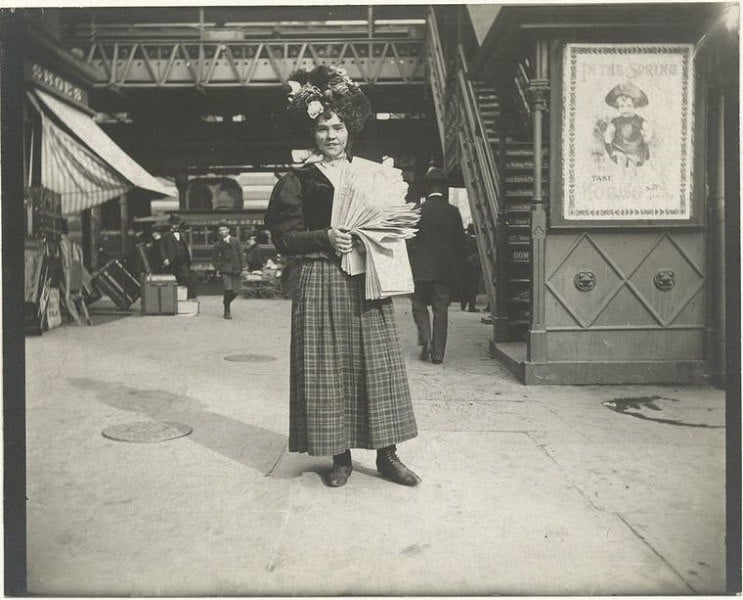 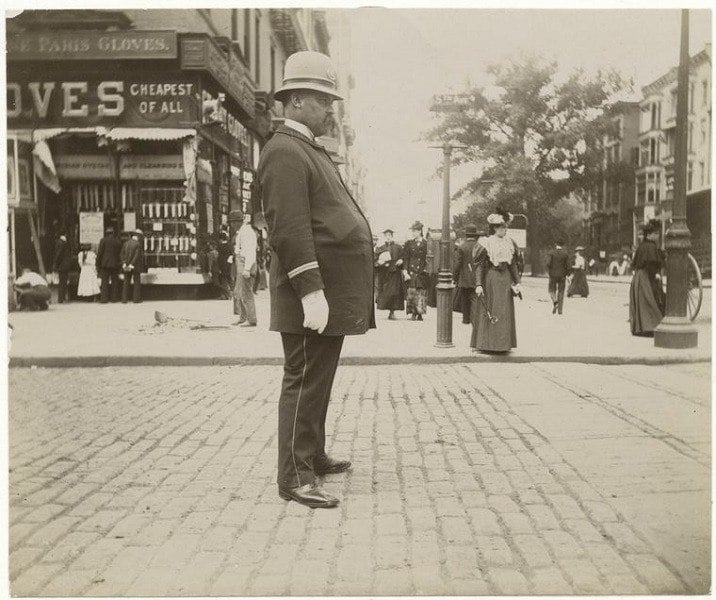 New York City's police department was not established until 1845. According to Marilynn Johnson's history of police violence, cases of police brutality were common in late 19th century New York City, when Austen took her photos. These cases often came when police encountered drunk or rowdy pedestrians, or for as a little as challenging an officer's authority. NYPL/Alice Austen 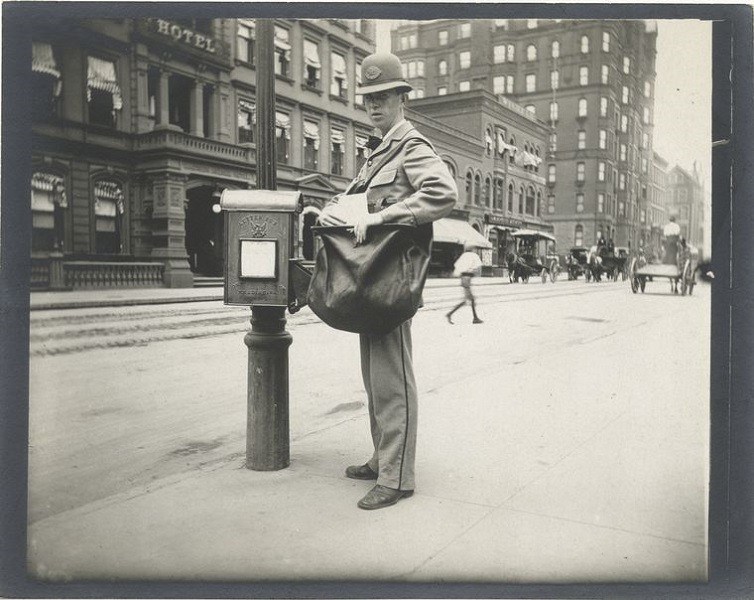 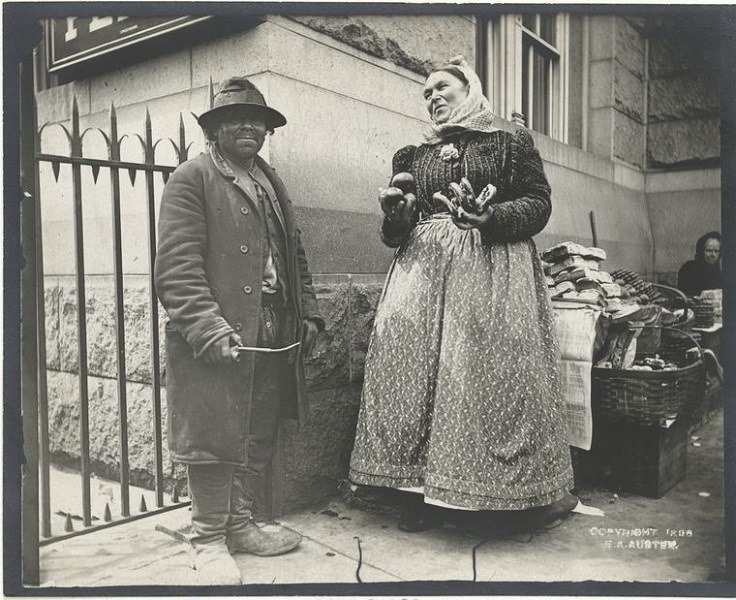 Pretzel carts are ubiquitous in present-day New York City, and this snack was an equally common sight in the late 19th century. European immigrants often made their living selling food on the street, usually influenced by their own cuisine, like sausages, pickles, hot corn, even oysters, until more affordable restaurants put most of them out of business. NYPL/Alice Austen 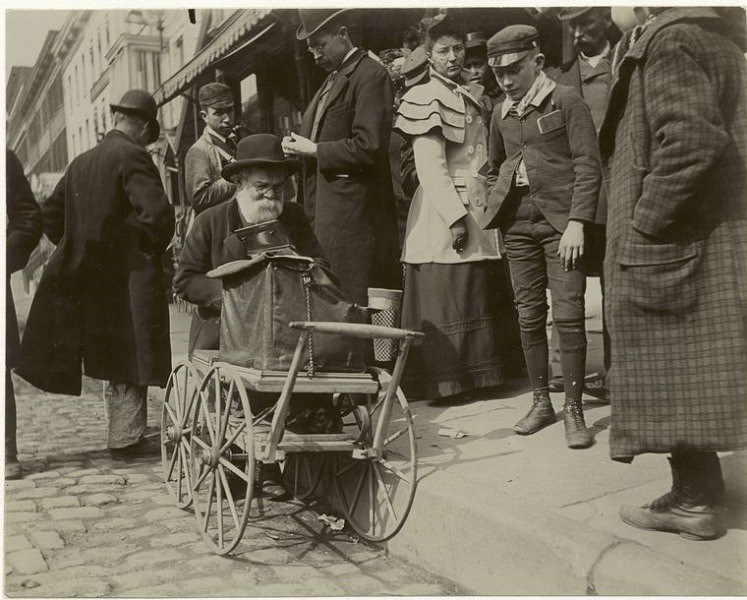 A popular street vendor draws a crowd. In 1886, New York's City's Lower East Side got its first pushcart market, where mostly Jewish peddlers sold food and other goods on the sidewalks, resembling the now-popular farmer's markets popular in the city. NYPL/Alice Austen 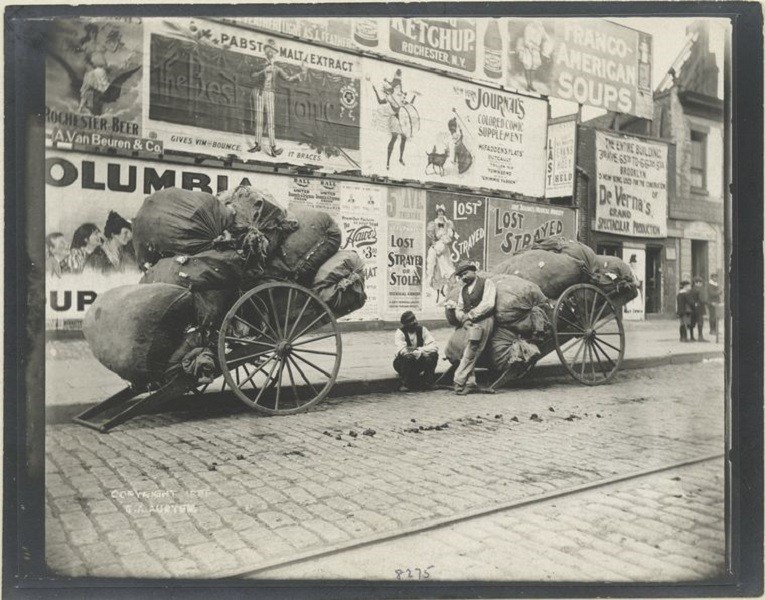 Rag-pickers, also known as a Chiffonnier, salvaged garbage like glass and scraps of clothing, that would then be sold by weight to be recycled. Rag picking was considered an honest occupation, a step above beggars. NYPL/Alice Austen 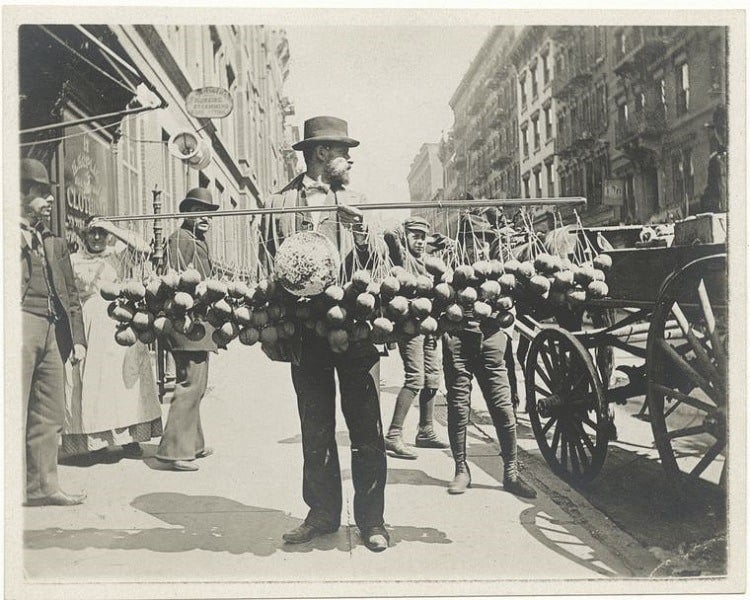 Another vendor shows off his collection of for-sale sponges. Police tried to control street peddlers, but only loosely enforced regulations like the "30-minute-law," which required street vendors to constantly relocate. NYPL/Alice Austen 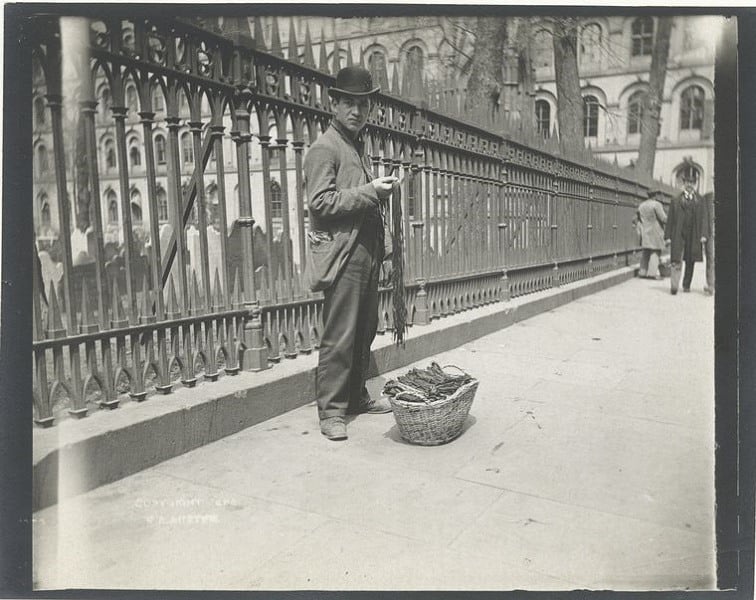 A vendor sells shoe strings on the sidewalk. This era saw an immigration boom combined with an economic depression that resulted in an increase in the city's poor, out of work population. By 1897, New York City established 18 "settlement houses" to help immigrants adapt to life in America. NYPL/Alice Austen 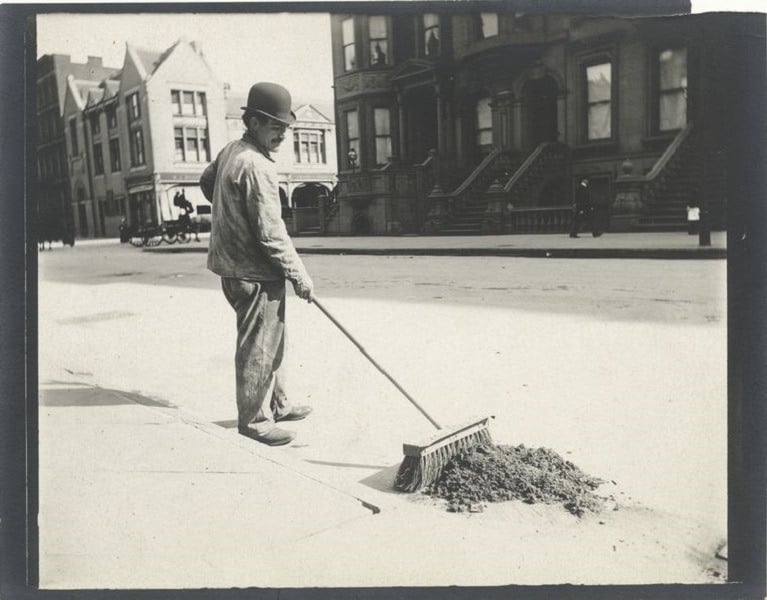 A street sweeper clears the sidewalk. During this period, no organized efforts existed to keep the city clean, except for these men armed with just a broom. Horses like those pulling hansom cabs left the city buried under manure. NYPL/Alice Austen 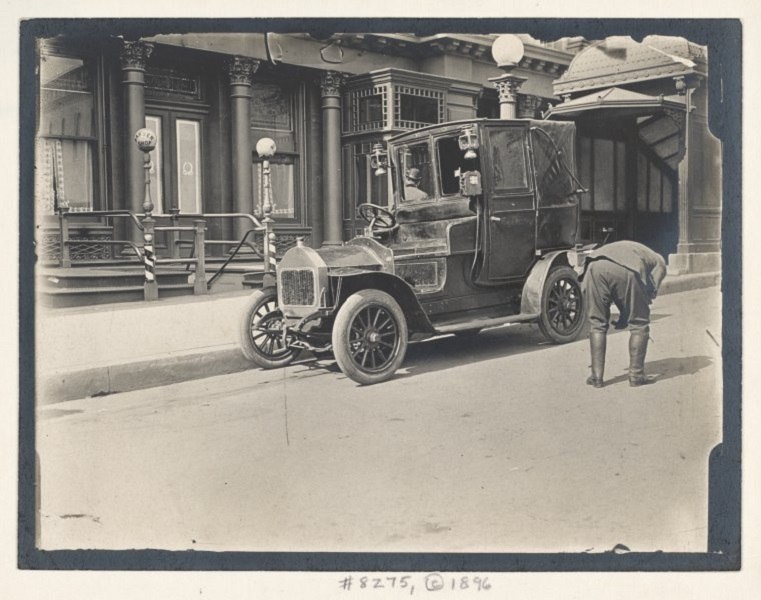 Alice Austen was never a professional photographer. She was simply the daughter of a prominent Staten Island family, and who once received a camera from her uncle as a gift.

Although untrained, Austen soon proved her skill behind the camera. Indeed, her photos of New York City streets circa 1896 provide a rare, vivid record of what life was like for the New Yorkers who made their living on the sidewalks.

Postmen, messengers, police officers, street vendors -- Austen saw the lives of these ordinary New Yorkers as inspiration for her work. Above, you'll find 15 of her most stunning shots, all of which evoke both the lives of those ordinary people as well as the time and place from which they came.

Next, find out what Brooklyn looked like before the hipster invasion. Then check out these stunning photos of old New York before the skyscrapers.