No Women In The Priesthood Ever, Pope Francis Says

The otherwise progressive pope takes a major step back toward the traditional. 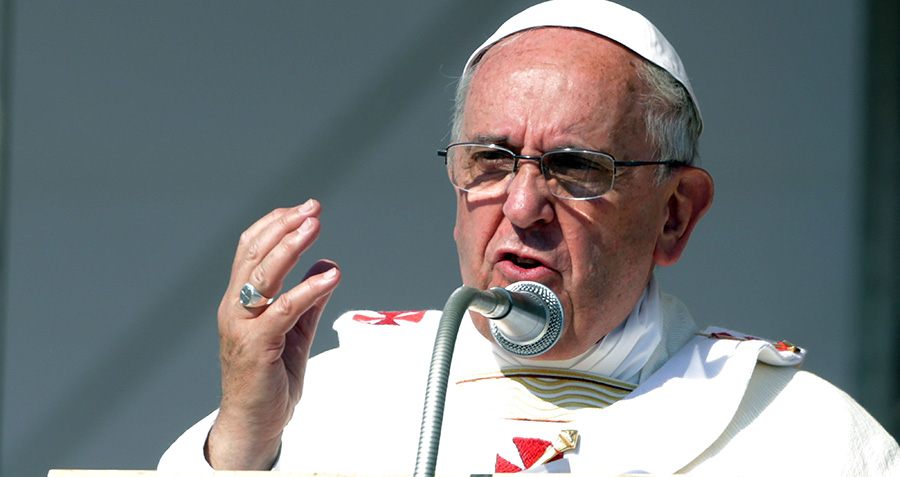 Franco Origlia/Getty ImagesPope Francis at the Mass of Corpus Domini on June 21, 2014 in Sibari Cosenza, Italy.

Pope Francis has won the hearts of millions with his progressive stances on poverty, immigration, and climate change — which is what makes his remarks on women in the priesthood all the more disappointing.

Speaking to journalists on a flight from Sweden to Rome on Tuesday, Pope Francis maintained the Roman Catholic Church’s stance that women can never become priests. While Francis had affirmed this stance before, progressive Catholics had been holding their breath for a change of heart after Francis recently created a commission to study whether the Church may ordain women as deacons (a matter still pending).

Francis’ stance on women in the priesthood became an issue again recently after photographers in Sweden captured images of him embracing Archbishop Antje Jackelén, the first female archbishop in Sweden and the current Primate of the Church of Sweden, during a church service.

On the plane ride home, a Swedish journalist asked the pope whether it was realistic, given Jackelén’s accomplishments, to hope women could become Catholic priests sometime in the next few decades. However, according to the reporters present, Francis responded by saying, “On the ordination of women in the Catholic Church, the last word is clear.”

The “last word” refers to Pope John Paul II’s 1994 apostolic letter, Ordinatio Sacerdotalis, in which he wrote that because Jesus picked only men as apostles, ordaining women as priests is not possible.

“It was given by St. John Paul II, and this remains,” Francis said of the letter. The Swedish journalist in question then asked, “Never?”

“If we read carefully the declaration made by St. John Paul II, it goes in this direction,” Francis replied. “But women can do many other things better than men.”

Next, check out why Pope Francis says it’s wrong to equate Islam with terrorism, before checking out the most interesting Pope Francis quotes.