The collection of jewelry was discovered at the Tell El-Amarna necropolis by a team of Egyptian and English archaeologists. 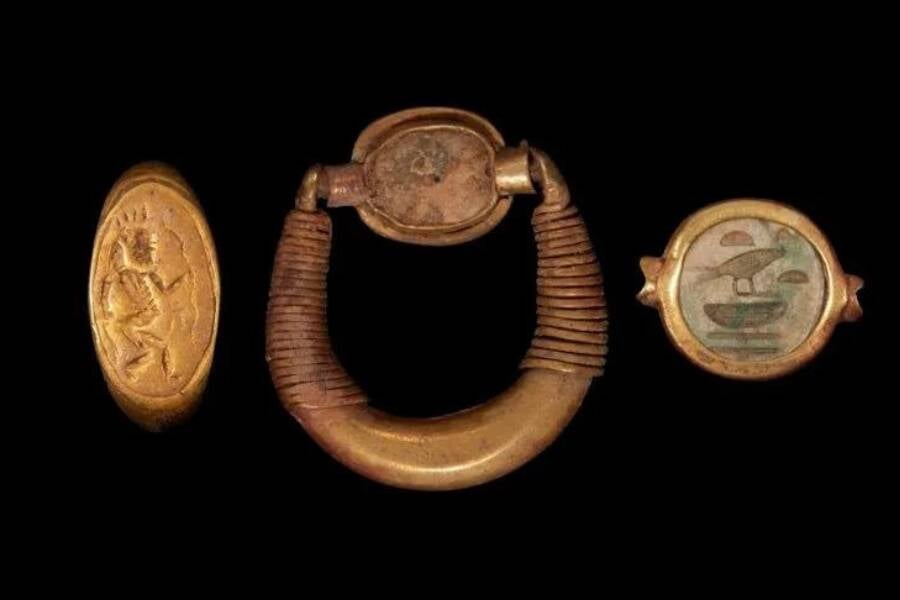 Egyptian Ministry of Tourism and AntiquitiesThe necropolis is located in modern-day Minya and was constructed in 1346 B.C.E.

Researchers working at the Tell El-Amarna necropolis along the eastern bank of Egypt’s Nile River recently uncovered a collection of ornate gold jewelry dating back 3,500 years in the grave of a young adult woman.

Per The Jerusalem Post, the team comprised of Egyptian and English archaeologists were excavating sites at the Amarna North Desert Cemetery, the burial ground for the city of Amarna, or Akhetaten, which once served as the capital city for 18th-Dynasty Pharaoh Akhenaten.

The young woman’s body was wrapped in a matting made of textiles and plant fibers, and she was adorned with a golden necklace and three gold and soapstone rings — one of which features an engraving of Bes, the Egyptian god of childbirth who was worshiped as a protective deity to mothers and children.

The other rings featured inscriptions that translate to “lady of the two lands,” which researchers believe may be a reference to the two kingdoms of Upper Egypt and Lower Egypt, which united in 3150 BCE after a campaign by the Pharaoh Menes.

According to Arkeonews, the Department of Archaeology at the University of Cambridge’s Dr. Anna Stevens said, “[The young woman’s] burial is located at the Amarna North Desert Cemetery in the low desert west of the North Tombs. It includes a small number of burial shafts and tombs, as well as pit graves.” 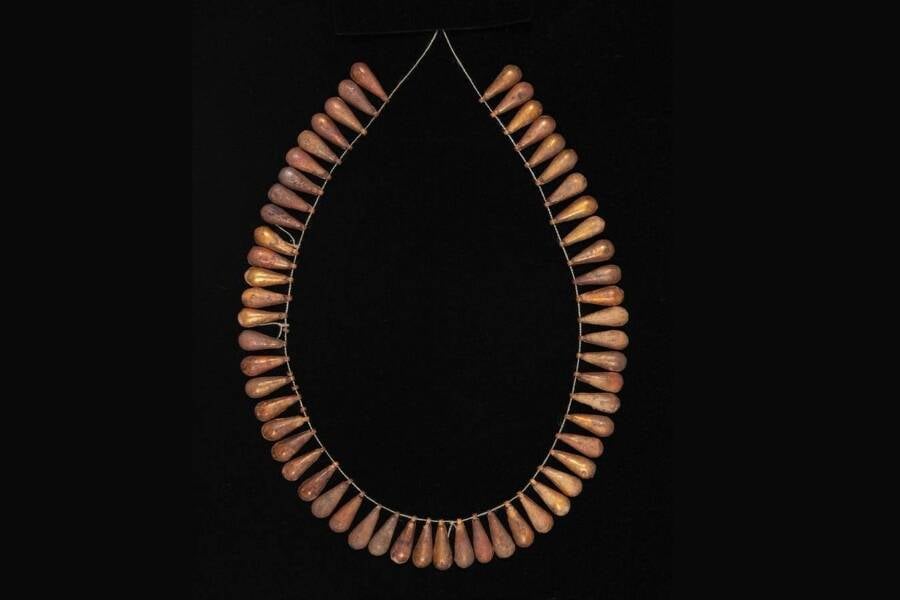 Egyptian Ministry of Tourism and AntiquitiesThe necklace found around the neck of the young girl buried at the Armana grave site.

The Armana project has been underway since 2005, with research specifically focused on the Armana necropolis. Since then, a number of relics have been discovered and undergone restoration. The larger archaeological mission at Tel El-Amarna, meanwhile, has been supported by the University of Cambridge since 1977.

The site also hosts numerous temples dedicated to the Egyptian sun god, Aten, who was the subject of a new religion started by Pharaoh Akhenaten called Atenism. Akhenaten is also notable for being the father of the famous boy king, Tutankhamun, who later abandoned his father’s capital city to return to Thebes, following Akhenaten’s death.

Akhenaten’s shift away from the polytheistic religion that was practiced by most ancient Egyptians towards the monotheistic Atenism was also a divisive choice, and upon abandoning the capital, many objects were hidden away, and Akhenaten’s name was erased from the list of rulers.

Tutankhamun also famously suffered from a number of serious health issues, the result of being born of an incestuous relationship between his father and his father’s sister.

When Tutankhamun took the throne at only 8 years old, his conglomerate of political advisers quickly ushered the young king and his people back to their original capital in Thebes and quickly abandoned the worship of Aten, meaning the people were now free to worship any of the other major deities, including Atum, the creator god.

In a sense, Tutankhamun became a symbol of restoration, who righted the perceived wrongs of his father. Of course, his myriad health issues did not lead to a long life, and King Tut died in his teenage years — but not before marrying his half-sister Ankhesenamu, with whom he had two stillborn daughters.

Still, the ancient Egyptians mummified Tutankhamun and erected a lavish tomb in his honor, which has become the subject of numerous archaeological investigations since its discovery by British archaeologist Howard Carter in 1922. 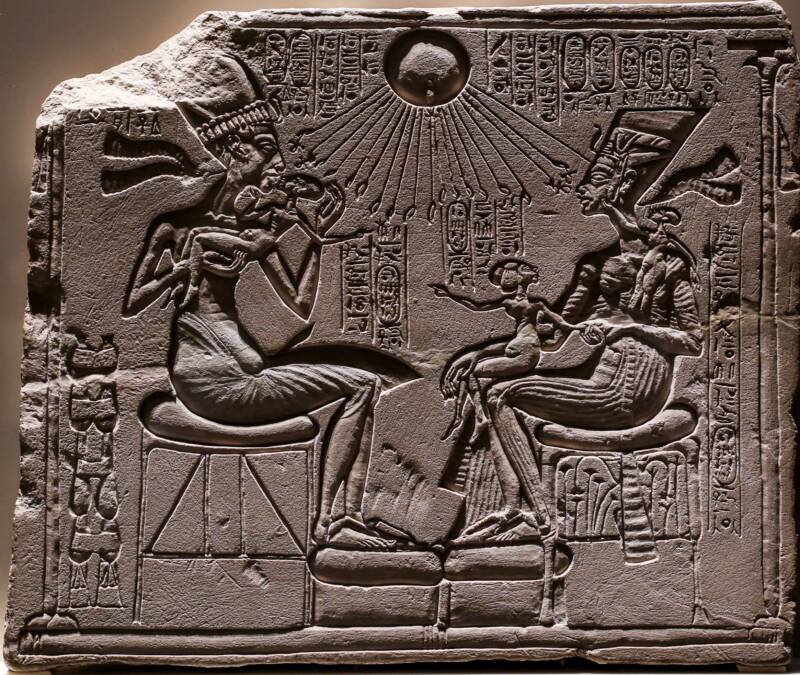 The discovery of the ancient jewelry is also the latest in a long line of discoveries that are changing our understanding of the lives of ancient Egyptians.

Just earlier this year, archaeologists discovered bronze branding irons which they believe may have been used by the ancient Egyptians to brand their slaves.

The irons, they determined, were too small to be used on cattle, but “the identification of these marks as brands emphasizes the dehumanization of these enslaved persons and implies that their status was on par with other property such as cattle,” said Ella Karev, an Egyptologist at the University of Chicago who authored the study that examined the branding irons.

Before that, researchers discovered 2,600-year-old cheese that had been stored in clay vessels, and two tombs housing 2,500-year-old mummies with golden tongues alongside 402 funerary figurines, amulets, and scarabs.

According to the Ministry of Tourism and Antiquities, the golden tongues were believed to allow the dead to speak to Osiris, the god of the underworld who judged new arrivals in the afterlife.

Many of the items discovered in these archaeological excavations will one day find themselves on display at the Museum of Egyptian Antiquities in Cairo.

After learning of this new discovery, read about the discovery of the oldest-known brewery found at an Egyptian burial site. Then, learn about the recently-discovered tomb of the previously unknown Egyptian queen Neith.