“Just to Show That He Could”: Vintage Strongmen In Action 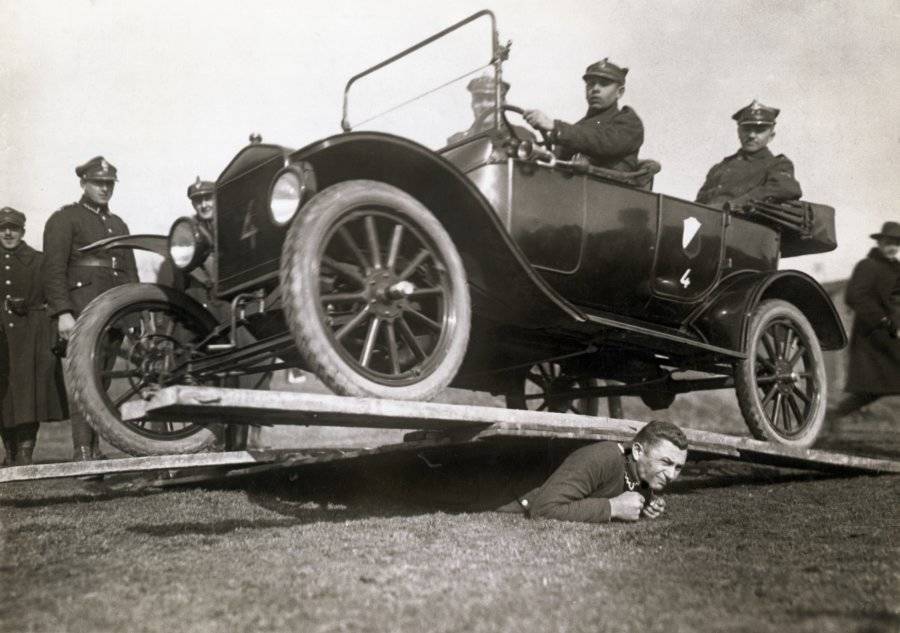 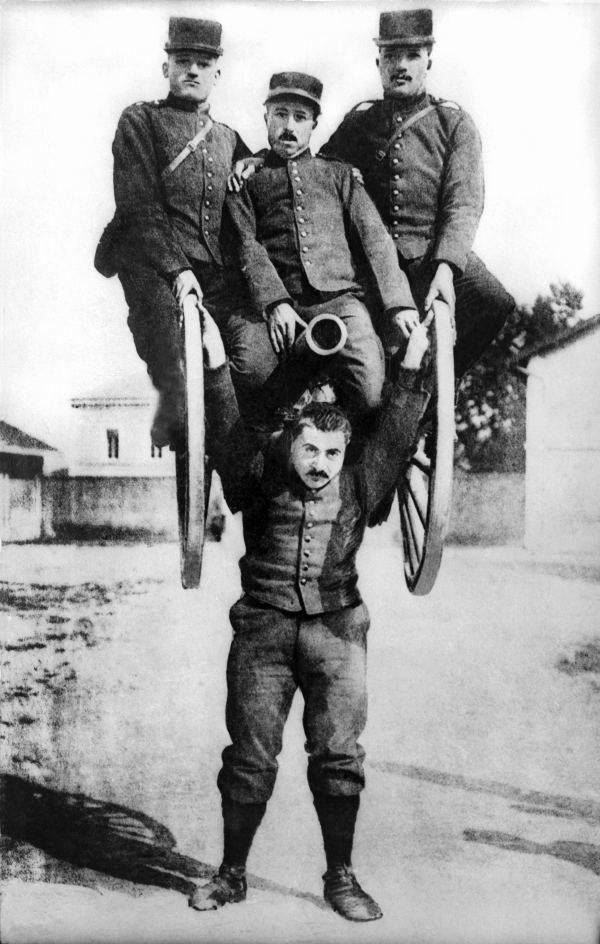 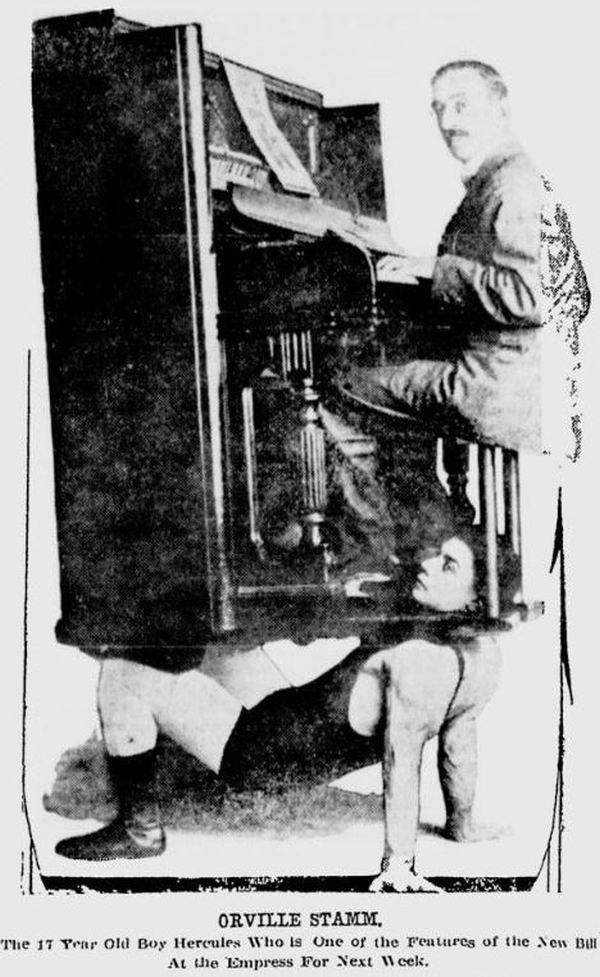 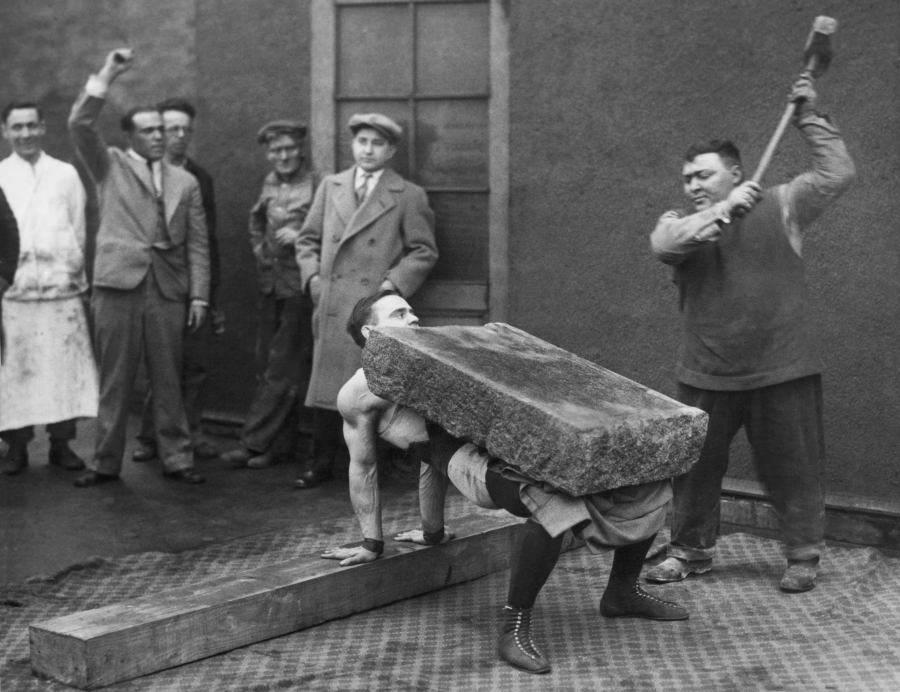 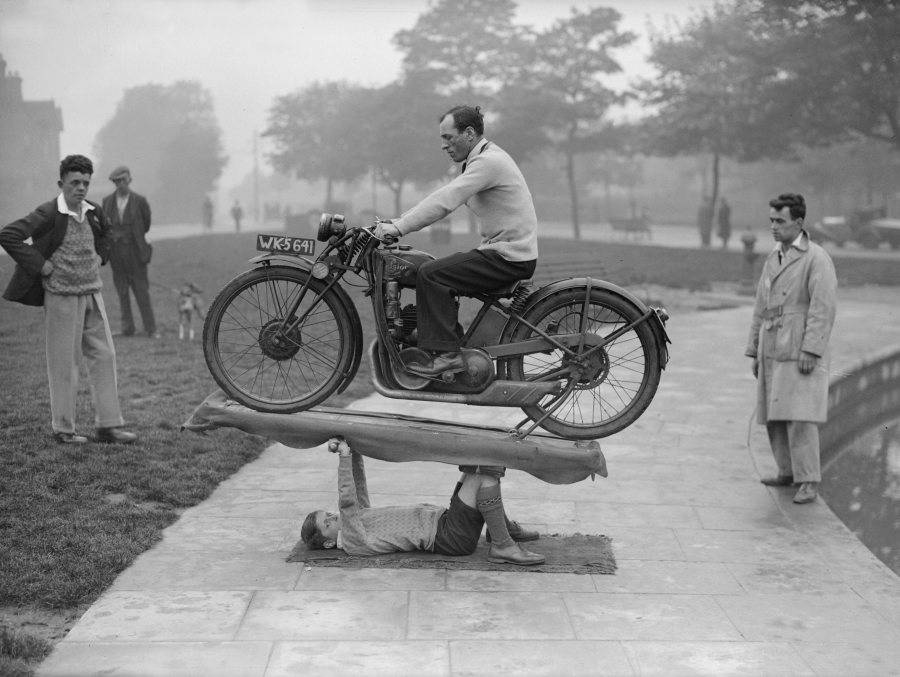 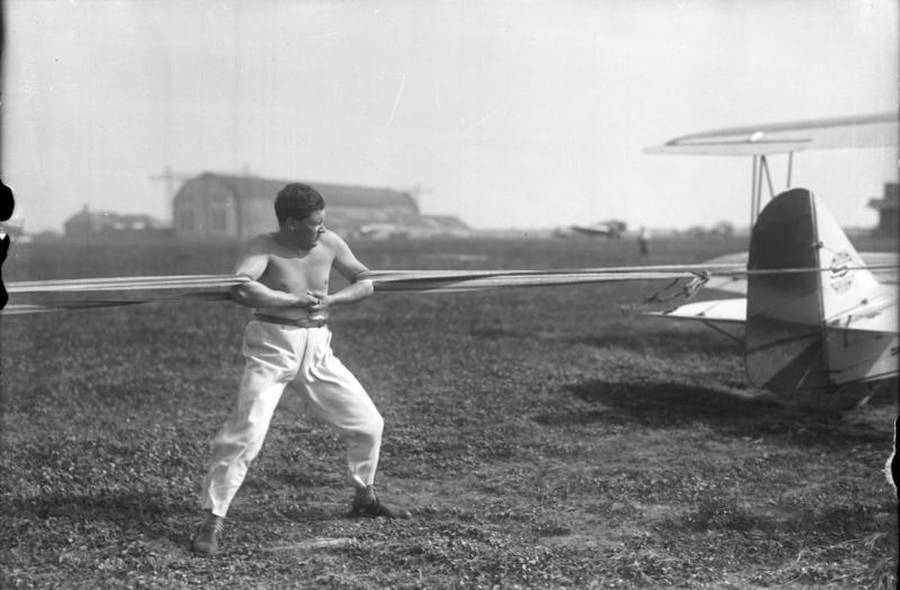 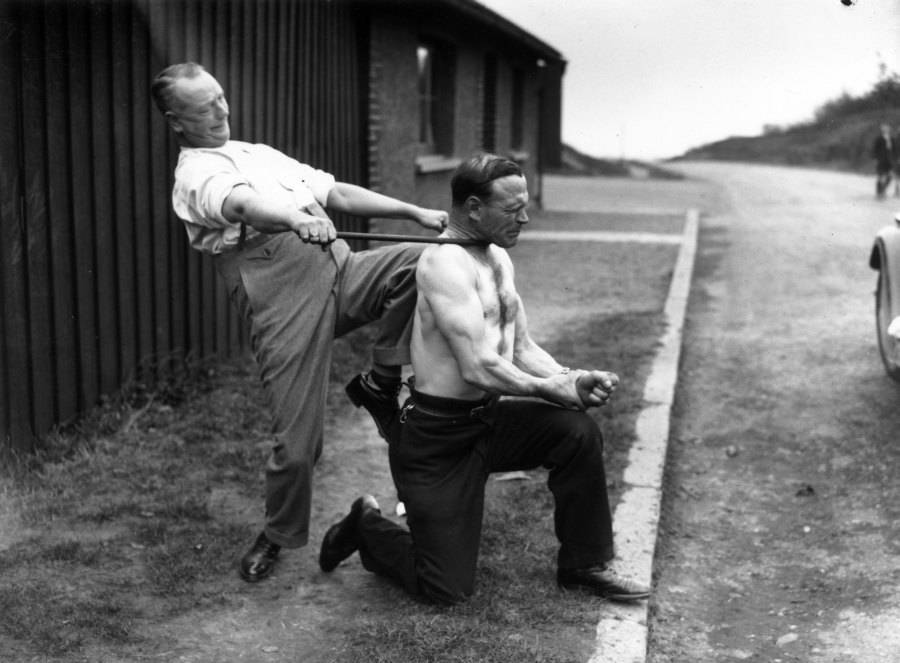 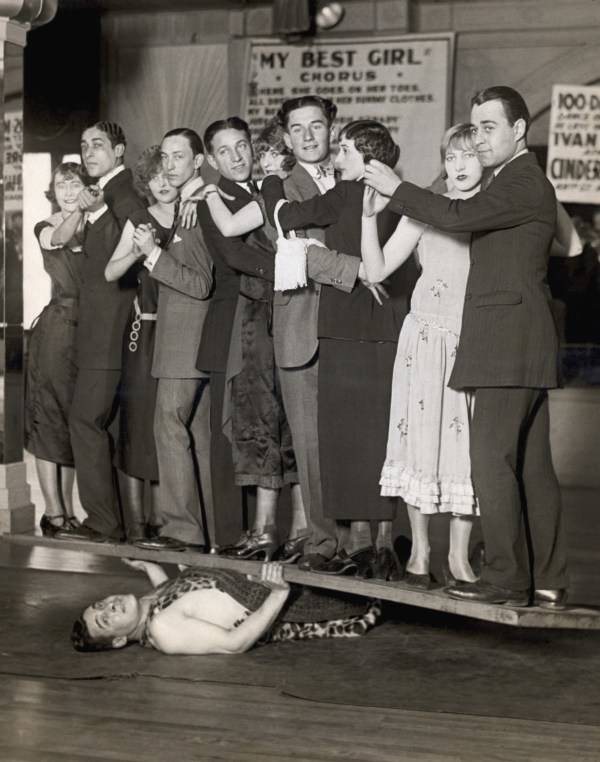 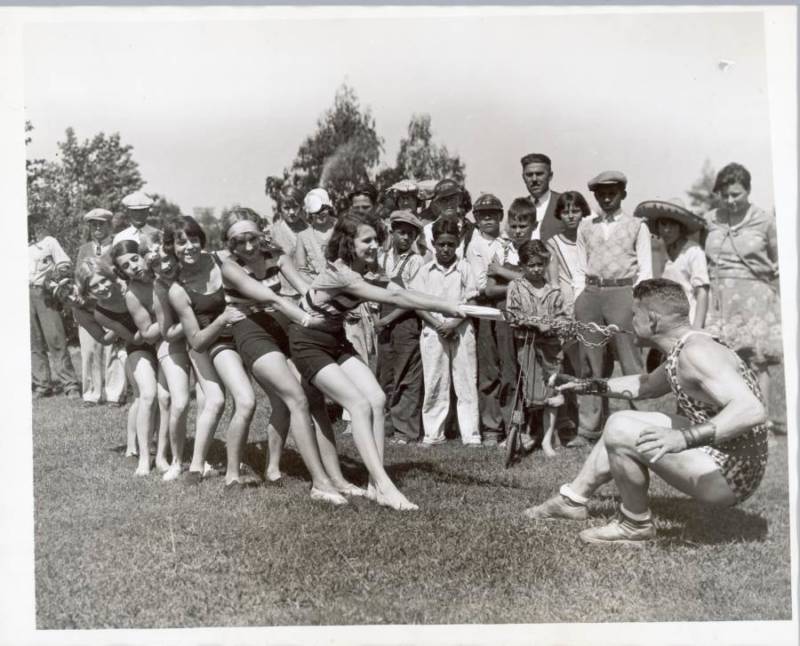 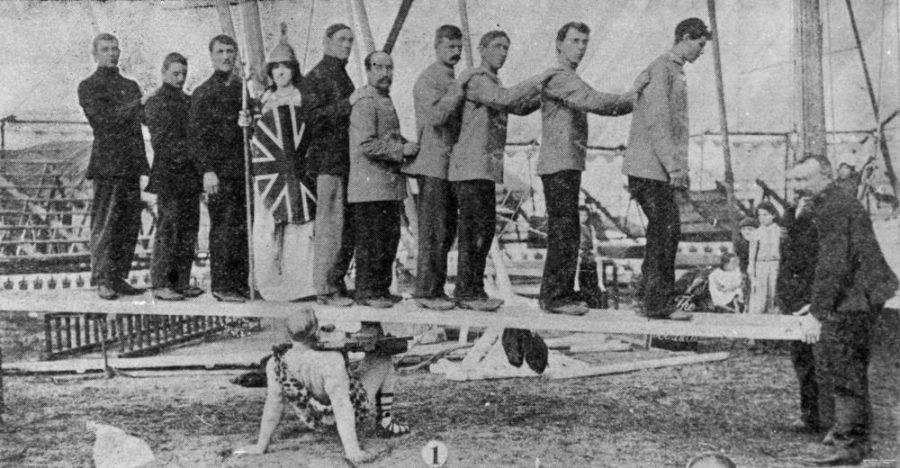 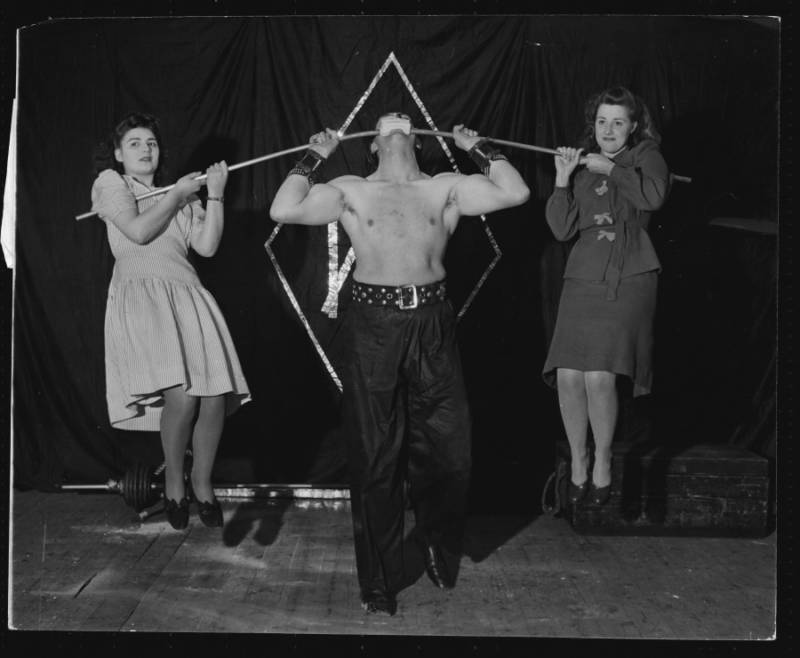 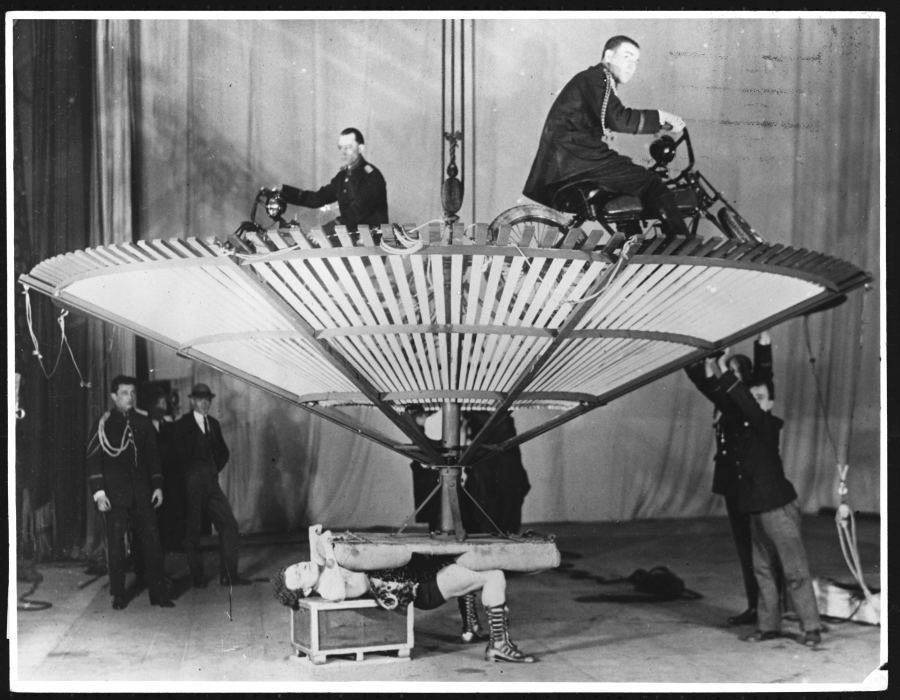 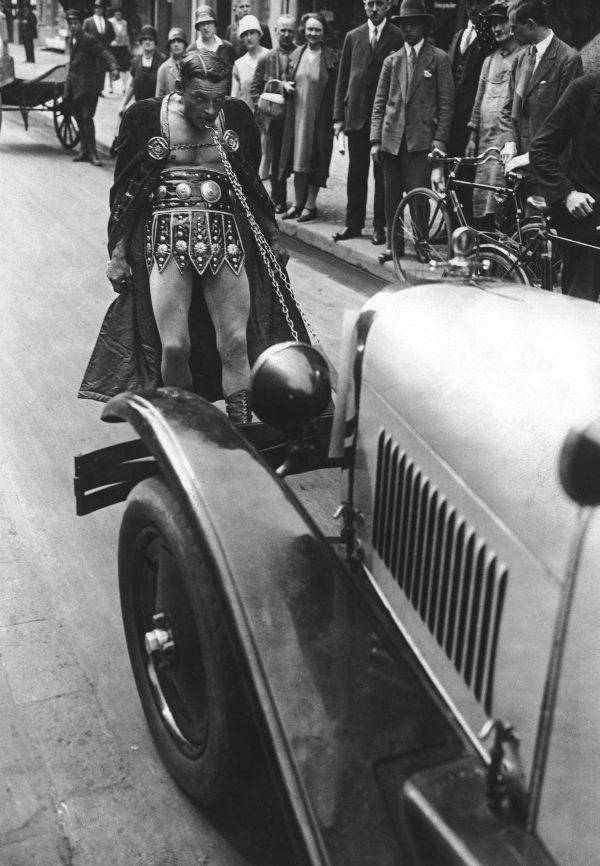 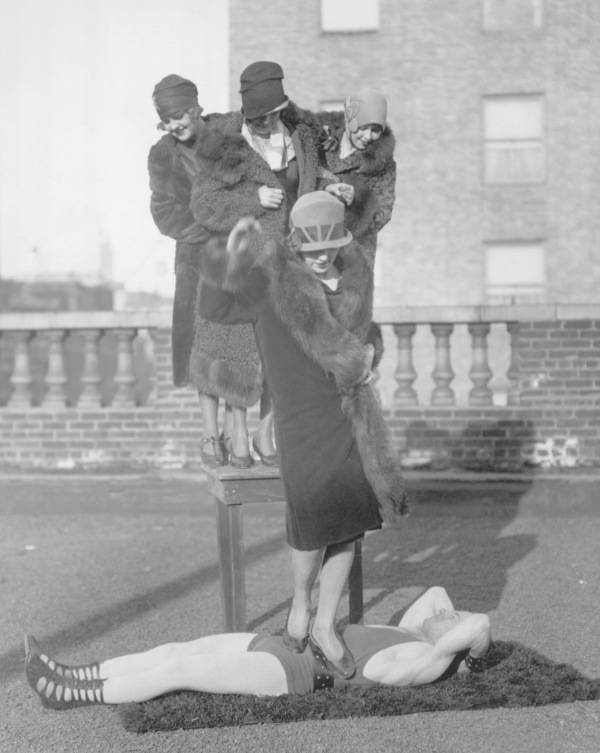 1 of 15
A man drives an automobile with three other passengers over two planks which are laid across the back of a strongman. Circa 1925. George Rinhart/Corbis via Getty Images
2 of 15
A strongman in the French Army lifts a cannon overhead along with three of his comrades astride it. France. Circa mid-to-late 1910s. Underwood Archives/Getty Images
3 of 15
Strongman and vaudeville performer Orville Stamm, 17, with his assistant. In addition to bearing the weight, Stamm would also sing. 1914.The Deseret News/Wikimedia Commons
4 of 15
Greek strongman Gus Lessis holds an 800 lb. rock on his chest as a man prepares to smash it to bits. New York City. April 9, 1926. Underwood Archives/Getty Images
5 of 15
The 14-year-old "Boy Samson" of Coventry, England supports a 200-pound motorcycle and its rider. May 28, 1932.Fox Photos/Getty Images
6 of 15
A circus strongman trains with two airplanes. Berlin. June 1930.German Federal Archives/Wikimedia Commons
7 of 15
George Challard of Woolwich, England allows a companion to bend a piece of iron around his neck. March 18, 1935.Fox Photos/Getty Images
8 of 15
"Ivan the Great," said to be the world's strongest man, makes his American debut by letting five couples dance on a plank held up by his chest. New York City. December 17, 1924.George Rinhart/Corbis via Getty Images
9 of 15
Seven young women compete in a tug of war competition with one man who is holding on with his teeth. Circa 1925.George Rinhart/Corbis via Getty Images
10 of 15
A circus strongman supports ten people on a plank. Brisbane, Australia. 1903.The Queenslander/Getty Images
11 of 15
Circus performer Alexander Marshal, lifts two women as they cling to a steel bar which rests across his mouth. Date unspecified.Hulton-Deutsch Collection/CORBIS/Corbis via Getty Images
12 of 15
Polish "giant" Sigmund Breithart lies beneath a "motordrome" in which two men ride motorcycles at top speed. Date unspecified.Hulton-Deutsch Collection/CORBIS/Corbis via Getty Images
13 of 15
Circus strongman "Stefan" demonstrates his strength by towing a motorcar with his teeth in Berlin. Circa 1925.FPG/Hulton Archive/Getty Images
14 of 15
Featherweight 115-pound strongman Andre Reverdy performs the "Old Ironsides" stunt, in which he supports several woman on his torso. New York City. Date unspecified.George Rinhart/Corbis via Getty Images
15 of 15 “Just to Show That He Could”: Vintage Strongmen In Action
View Gallery

The line between genuine bodybuilding as we know it today and circus "strongman" charlatanism was hopelessly blurry at the turn of the 20th century. But before men like Charles Atlas brought serious strength training out from underneath the big top, dangerous exhibits mixing strength and deception were how the public came to know the sport.

Today, despite the relatively brief grip that such strongmen had on the popular imagination, the images remain fascinating: the barbells with globular ends of an indeterminate weight; the cheetah-print outfit borrowed from Tarzan; the alleged feats of strength that resembled, in pomp and in practice, the large-scale magic acts also popular at the time.

But this kind of act wasn't a fin de siècle innovation, as Burkhard Bilger observes in his 2012 The New Yorker article "The Strongest Man in the World," which, in part, artfully explores the link between these vintage strongmen and the caber-tossing ESPN strongmen of more recent vintage (and far more imposing girth).

"In the sixth century B.C., Milo of Croton, the greatest of Greek strongmen, is said to have lugged a four-year-old heifer the length of the Olympic arena... The Vikings tossed logs, the Scots threw sheaves of straw, the ancestors of the Inuit are rumored to have carried walruses around. Even a man as brilliant as Leonardo da Vinci felt the need to bend horseshoes and iron door knockers, just to show that he could."

But the beginnings of strongman theatricality displayed in the gallery above were, perhaps, pioneered by an Englishman named Thomas Topham in the 1730s. The photographs of the 20th-century performers above — some anonymous or forgotten, others legendary — are impressive, if likely staged or faked in some way. But, allegedly, they had nothing on Topham. According to one playbill from 1736:

"He lays the back Part of his Head on one Chair, and his Heels on another, and suffers four corpulent men to stand on his Body and heaves them up and down. At the same time, with Pleasure, he heaves up a large Table of Six Foot long by the Strength of his Teeth, with half a hundred Weight hanging at the farthest end; and dances two corpulent Men, one in each Arm, and snaps his fingers all the time."

But claims like this, or titles such as "World’s Strongest Man," as Bilger notes, were "of cheap coinage in those days." After all, "no circus ever made a shilling claiming to have the second strongest."

Next, check out these vintage circus photos from the glory days of the big top. Then, explore some truly weird Olympic sports of decades past.

Kellen Perry
Kellen Perry writes about television, history, music, art, video games, and food for ATI, Grunge, Ranker, Ranker Insights, and anyone else that will have him.
You might also like
×
Follow ati On
Join The All That's Interesting Weekly Dispatch
Like Follow