China is pushing a new progressive sexual education curriculum and some parents are not too happy about it. 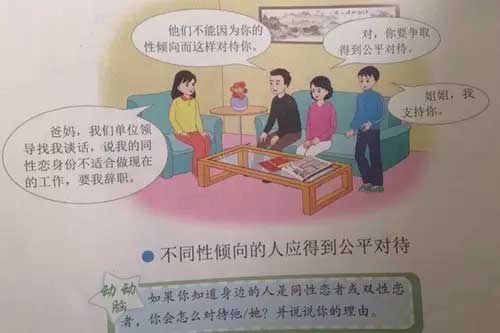 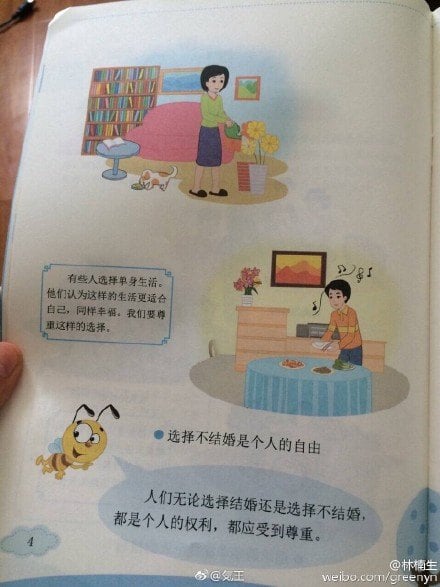 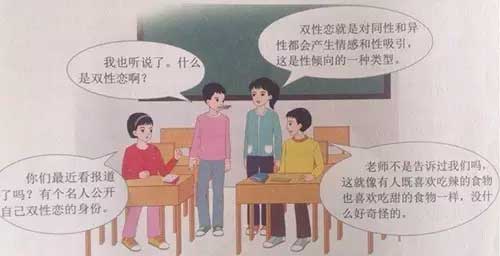 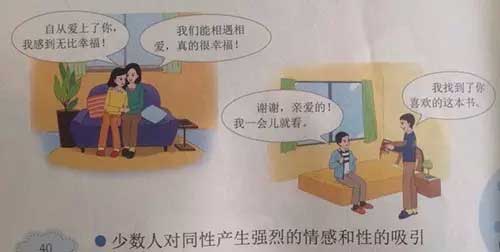 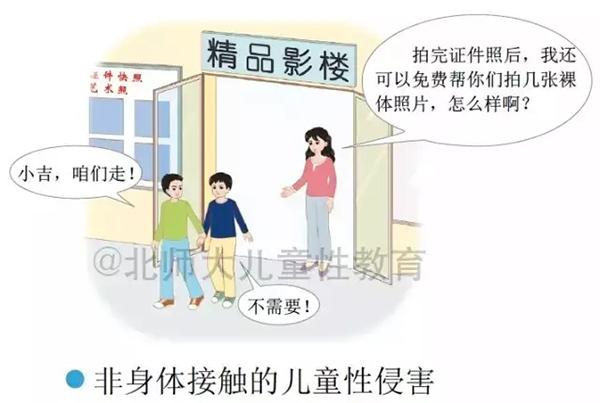 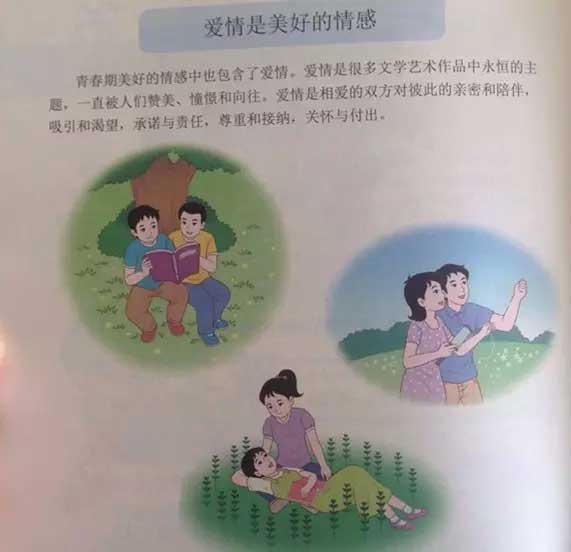 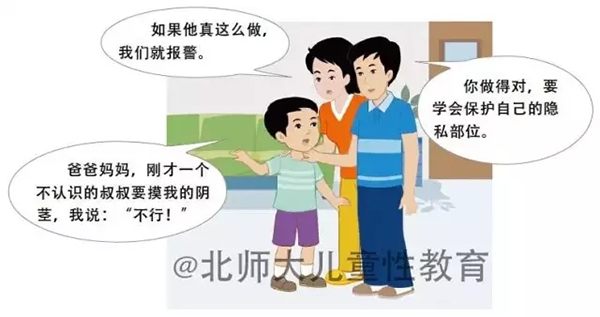 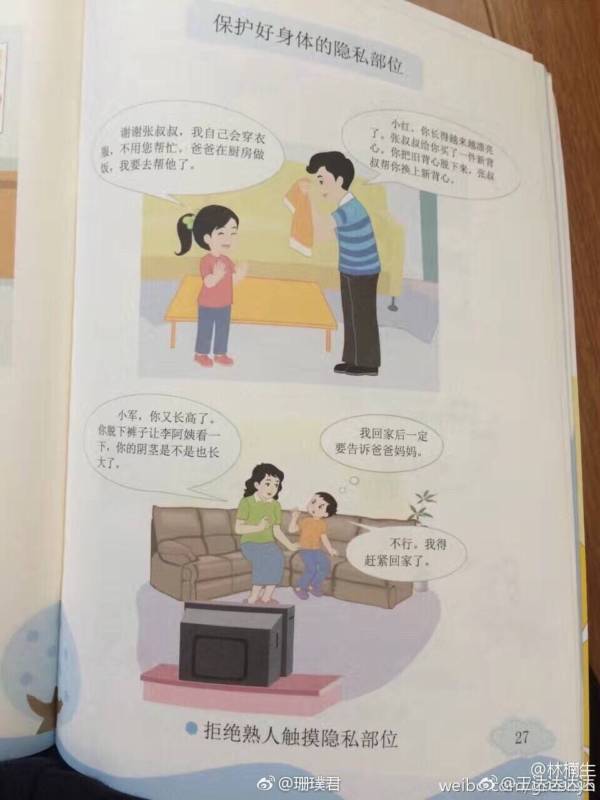 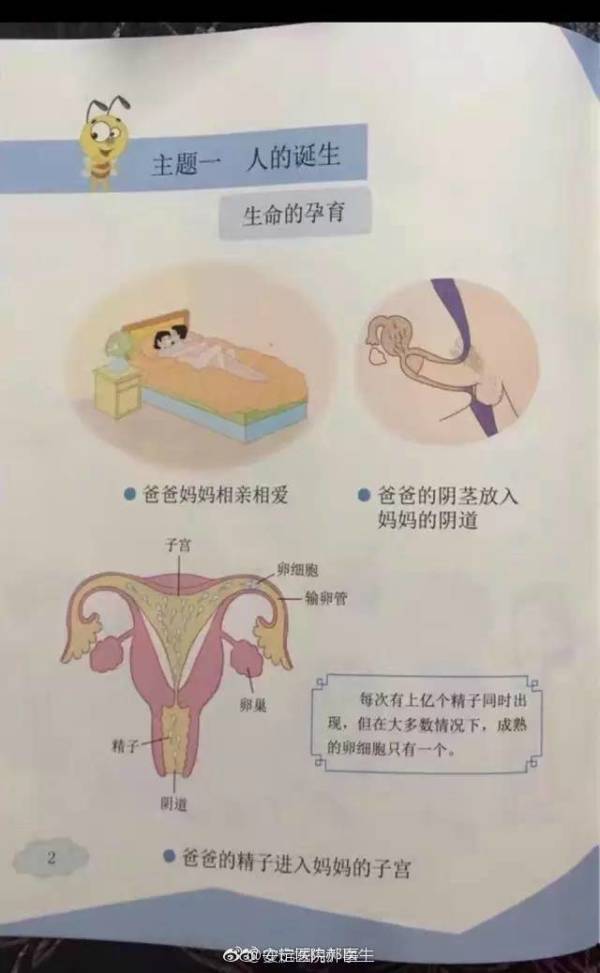 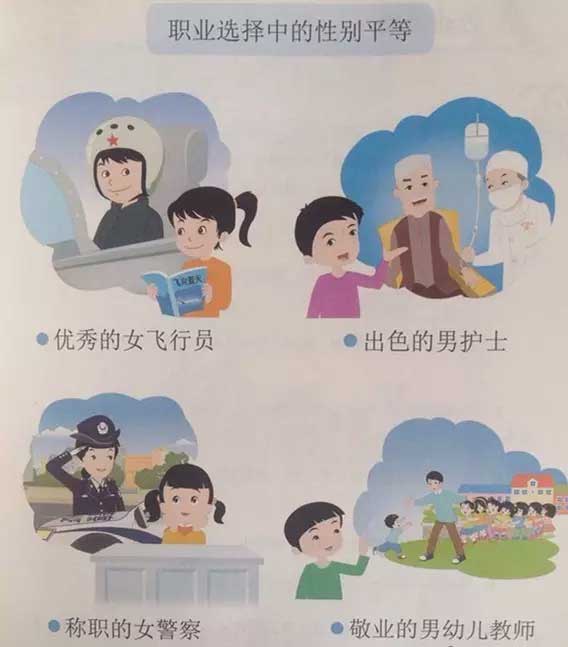 1 of 17
The textbooks in question.Shanghaiist
2 of 17
"Gay and lesbian couples in committed relationships caring for their children."Shanghaiist
3 of 17
"A man remarks how wonderful it is to return home to the delicious dinner prepared by his husband everyday after work."Shanghaiist
4 of 17
"A young woman informs her family that her company has asked her to resign because she is gay. Her highly supportive family stands by her and says she needs to fight to be treated equally."Shanghaiist
5 of 17
"Some people choose to be single and others choose to be married," and there's nothing wrong either choice.Shanghaiist
6 of 17
"'Did you guys hear about the celebrity that came out as bisexual?' exclaims a girl. Her classmate responds, 'Didn't Teacher tell us? Some people like both spicy and sweet. There's nothing to be shocked about.'"Shanghaiist
7 of 17
"'A minority of people experience attraction to members of the same sex.'"Shanghaiist
8 of 17
Grade 5 textbook teaching the importance of using condoms.Shanghaiist
9 of 17
"Woman at a photo studio has just taken identity card pictures, and is now offering to help take nude shots for the kids. They refuse her advances and make a quick exit."Shanghaiist
10 of 17
"From a Grade 5 textbook: 'Love is a beautiful thing'"Shanghaiist
11 of 17
Sexual fantasies from a Grade 4 textbook. Shanghaiist
12 of 17
"'Daddy, mommy, just now an uncle wanted to touch my penis, and I said NO,' says the little boy. 'If he does this, we will call the police,' mom replies."Shanghaiist
13 of 17
"'Daddy, mommy, Uncle Wang our neighbor just tried to touch my buttocks, and I said NO,' the little girl says to praise from her parents."Shanghaiist
14 of 17
"An uncle tells her niece, 'Hong, you've grown to become so beautiful. Uncle has bought you a singlet. Do you want to take off your t-shirt so I can help you put on your new singlet?' The girl responds, 'Thanks Uncle. I can put on my own clothes and don't need your help. Dad is in the kitchen making lunch and I need to go help him.' In the picture below, an aunt tells her nephew, 'Jun, you've grown so tall now. Take down your pants so Auntie can see if your penis has also grown longer.' The boy responds, 'No, I'm going home now,' and decides he will tell his parents when he sees them.'"Shanghaiist
15 of 17
"'Daddy and mommy love each other' --> 'Daddy's penis enters mommy's vagina' --> 'Daddy's sperm enters mommy's uterus'"Shanghaiist
16 of 17
Meant for students in Grade 2, this teaches about about gender equality.Shanghaiist
17 of 17 China has introduced a series of progressive sexual education textbooks that are shocking some Chinese parents.

The textbooks, which are for primary or elementary school students, teach children a variety of values, such as gender equality in the workplace, acceptance of homosexuality, the importance of reporting sexual abuse and other basic knowledge about the birds and the bees.

According to the Shanghaiist, a national debate erupted this past weekend when a mother posted pictures of her young child's textbook to Weibo, the Chinese version of Twitter.

"[Are these] fake textbooks?" the mother wrote alongside the pictures, according to the Shanghaiist. "Is it reasonable for a textbook to be compiled like this? I myself blush just looking at [it]."

While some people agreed with the mother, writing comments such as, "The picture showing the man and woman having sex is absolutely unacceptable," a vocal swelling of support on the Chinese internet out-shouted the naysayers.

One doctor wrote a viral post that read, according to the Shanghaiist:

"Abortion ads are now everywhere, and if the adults are now saying these textbooks have gone too far, it can only be said that their own sexuality education has been a big failure... Sexuality education protects children from sexual abuse, and it can only be effective if we go straight to the point and do not hide anything. Those who say the textbooks have gone too far mistake ignorance for purity."

Chinese LGBTQ groups have also come out in favor of the measure, with one organization writing a viral article titled: "China, finally you recognize homosexuality," reports the Shanghaiist.

This broad display of support may have something to do with Chinese state media supporting the effort. According to the Shanghaiist, both the Global Times and the People's Daily argued in support of the progressive sexual education curriculum.

This measure comes after years of calls for reform in the ways China teaches sex ed.

Meanwhile, STD rates in China have skyrocketed, and some say that a lack of knowledge about reproductive health has led many Chinese women to rely on abortions as a primary form of contraception.

Indeed, the Shanghaiist reports that a survey last year discovered that 10 percent of "female Chinese college students admitted to having at least one abortion."

Next, check out how China is growing a vertical forest to gobble up CO2, before finding out about the internet troll armies governments create to shape public opinion.