While Border Patrol agents found $23,500 worth of marijuana, the agency is not sure for how long the catapult was operational. 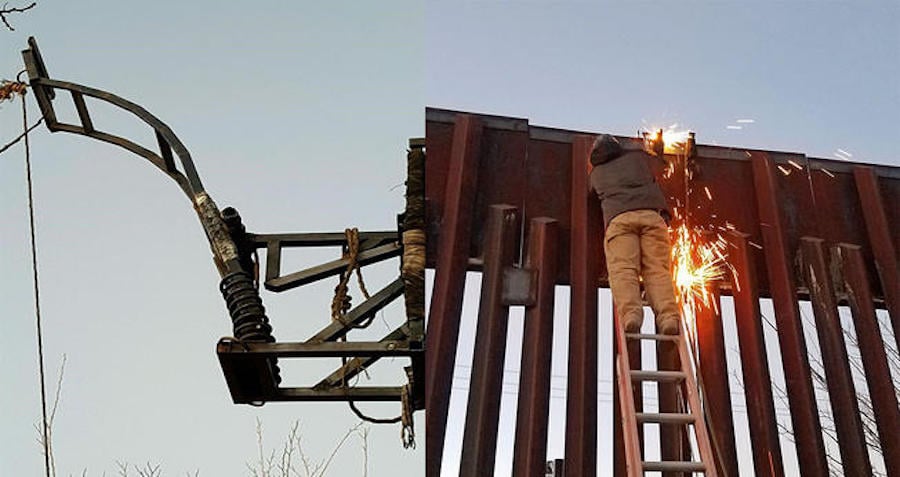 U.S. Customs and Border ProtectionThe catapult, pictured on the left, was hooked onto the border fence near Douglas, Arizona.

U.S. Border Patrol agents discovered a catapult hooked onto the U.S.-Mexico border fence this past Friday near Douglas, Arizona. Drug smugglers were apparently using it to successfully launch bundles of marijuana into the United States.

According to U.S. Customs and Border Protection (CBP), border agents were patrolling near the Douglas Port of Entry when they saw “several people on the [Mexico] side quickly retreating from the fence as they approached. When agents arrived at the fence, they found a catapult system attached to the [Mexico] side of the border fence.”

When border agents searched the area, they found two bundles of marijuana that weighed more than 47 pounds combined, according to NBC 7 San Diego.

The catapult device was “very complex,” Tucson Sector Border Patrol Agent Vicente Paco told NBC 7 San Diego. “This is the first mechanism that we’ve found related to systems like this to launch narcotics across the border.”

Paco added that smugglers have tried using similar launchers in the past, including air pressure cannons and trebuchets, but that CBP had not found a device as complicated as this one before. Mexican authorities seized the catapult after CBP agents dismantled it using welding equipment.

The 47 pounds of marijuana was worth approximately $23,500, according to the CBP. They do not know how long the catapult was operational and authorities have not yet made any related arrests on either side of the border.

Next, read up on Trump’s plan to ask Congress, not Mexico, to pay for his border wall, before finding out how new analysis shows that Trump’s border wall will cause major environmental damage.