Scientists are calling the levels of toxic pollution present in the Mariana Trench "extraordinary." 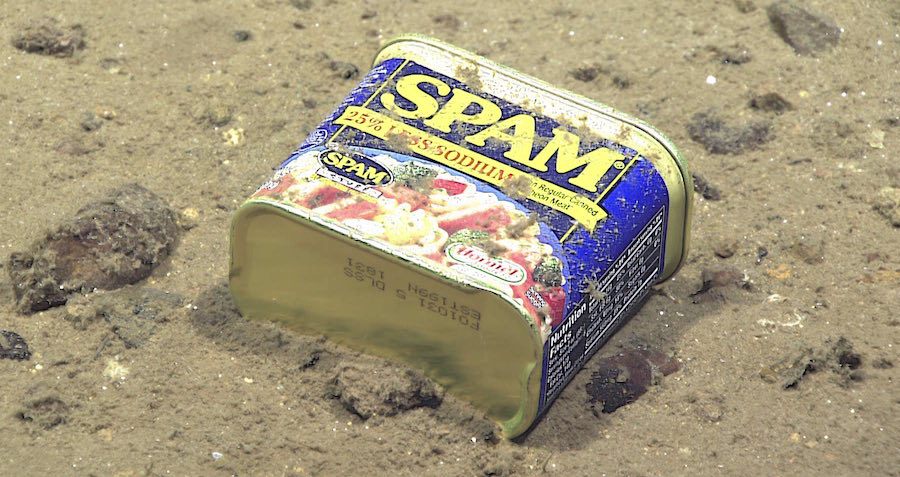 Noaa Office of Ocean ExplorationA discarded tin of Spam, discovered by the research team, sits on the slope of a canyon leading to the Mariana Trench.

Humanity has managed to pollute even the most remote place on Earth: the Pacific Ocean’s Mariana Trench.

New research published in Nature Ecology & Evolution used a robotic submarine to travel 36,000 feet below the surface to bring back samples from the ocean’s deepest point.

What researchers found is that the small crustaceans living there are contaminated with toxic chemicals at a factor of more than 50 times the amount of pollution found even in crabs that live in China’s toxic river waters.

“We still think of the deep ocean as being this remote and pristine realm, safe from human impact, but our research shows that, sadly, this could not be further from the truth,” said Alan Jamieson, who led the research, to the Guardian.

“The fact that we found such extraordinary levels of these pollutants really brings home the long-term, devastating impact that mankind is having on the planet.”

The toxic chemicals that Jamieson’s team found infecting the crustaceans are called persistent organic pollutants (POPs). Even though countries across the world outlawed POPs in the late 1970s, these chemicals accumulate in fat, are water-repellent, and stick to plastic waste like glue.

As dead animals and particles of plastic fall downwards, these pollutants filter through the food chain, eventually getting ingested by the scavengers who live at the very bottom of the Mariana Trench.

“The very bottom of the deep trenches like the Mariana are inhabited by incredibly efficient scavenging animals, like the 2cm-long amphipods we sampled, so any little bit of organic material that falls down, these guys turn up in huge numbers and devour it,” said Jamieson.

“When it gets down into the trenches, there is nowhere else for it to go. The surprise was just how high the levels were — the contamination in the animals was sky high.”

Unfortunately, this problem seems to affect other deep-sea trenches as well. The researchers found amphipods contaminated with POPs in the Kermadec Trench, which is more than 4,000 miles away from the Mariana Trench, near Australia.

Ultimately, the scientists found that the pollution was omnipresent and that it could be found in “in all samples across all species at all depths in both trenches.”

Next, find out about the mysterious sound emanating from the Mariana Trench.