Meet “Squeaky” Fromme, The Charles Manson Acolyte Who Tried To Kill A President

Lynette Fromme became a Manson family member as a homeless teenager — and eventually tried to kill President Gerald Ford in 1975.

On the morning of September 5, 1975, an impassioned young woman in a red hooded robe traveled to Sacramento to plead with President Gerald R. Ford on behalf of California’s redwood trees. Rather than a peaceful protest, however, the young woman had something else in mind. Armed with a loaded .45 caliber pistol, she pushed her way to the front of the crowd and pointed the gun at the president from an arm’s length away.

The president walked away from the encounter unharmed and the young woman was arrested, but her story would prove to be far more interesting than an attempted assassination. As her arrest records soon revealed, the young woman had experience with crime and with one of the most infamous criminals of the period: Charles Manson. 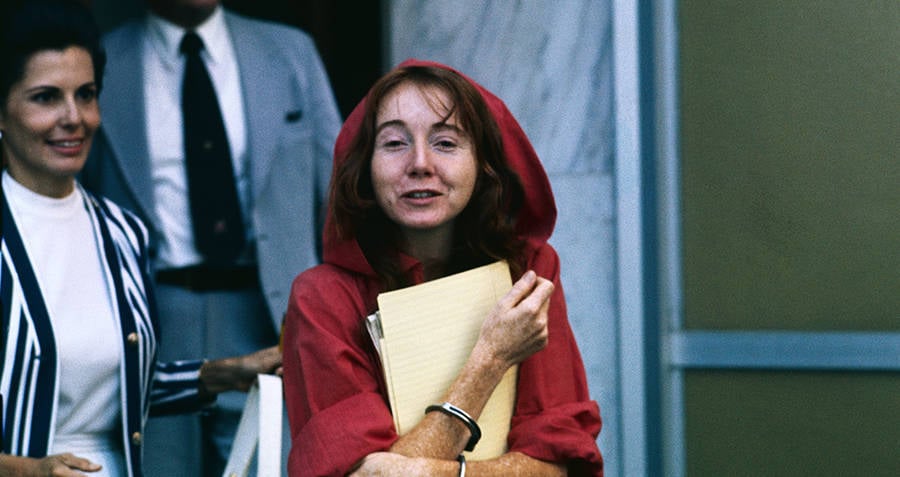 Bettmann/Getty ImagesLynette “Squeaky” Fromme on her way to trial.

Her name was Lynette “Squeaky” Fromme.

Here’s how she went from an all-American girl-next-door to a devoted member of one of the most notorious cults in American history and finally to serving a life sentence for trying to assassinate a sitting U.S. president.

Ironically, roughly 15 years before attempting to assassinate the President of the United States, Fromme was invited to perform at the very place where he lived.

Born on October 22, 1948, to middle-class parents in Santa Monica, California, Lynette Alice Fromme was a typical all-American girl. She was a sweet child who enjoyed playing outside with friends and being active. 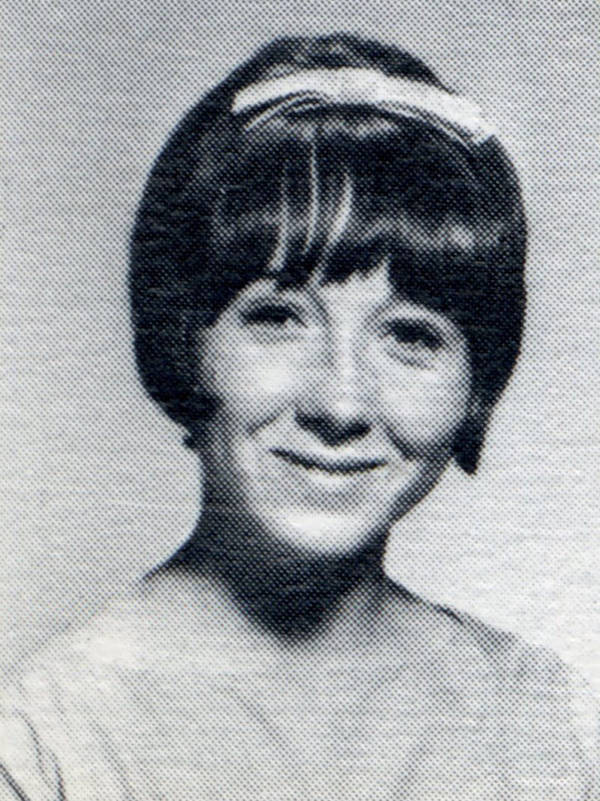 But Fromme’s good-girl personality was not long for this world. In 1963 when Fromme was 14, her parents moved to Redondo Beach, California. She quickly fell in with the “wrong crowd,” as her family said, and began drinking and using drugs. Before long, her grades slipped and she found herself suffering from depression.

She was in her first year of college when her father, an aeronautical engineer, kicked her out apparently because she was promiscuous and insubordinate. By 1967, she was homeless, depressed, and looking for an escape.

And someone was willing to take her in. 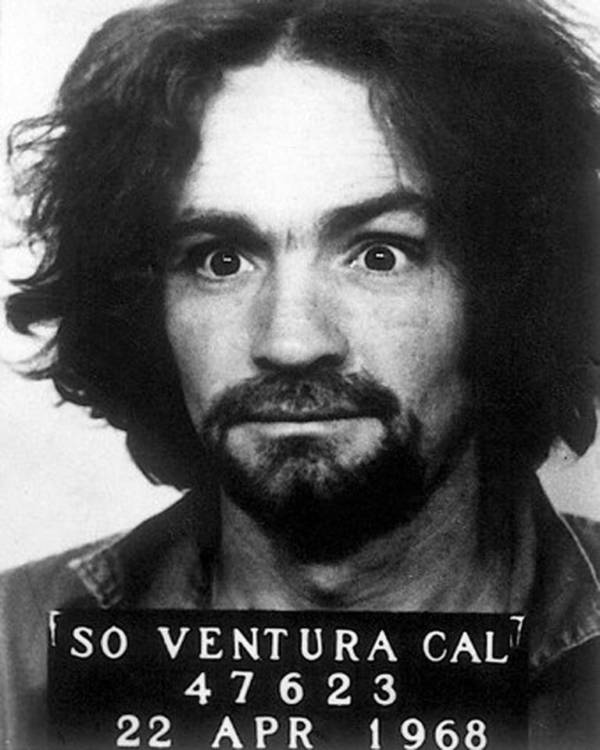 Charles Manson found Lynette Fromme on the shores of Redondo Beach in 1967.

Despite the fact that he had just recently been released from prison, Squeaky Fromme became enamored with Manson. She fell in love with his philosophies and attitude toward life, later calling him a “once-in-a-lifetime soul.”

“Don’t want out and you’re free,” he told her during their first encounter. “The want ties you up. Be where you are. You got to start someplace.”

Within days, Fromme had all but become a Manson Family member. She traveled with Manson himself and by association became friends with fellow family members Susan Atkins and Mary Brunner.

In 1968, the Manson Family found their home at the Spahn Movie Ranch outside Los Angeles. With little money to pay for rent, Manson reached a deal with George Spahn, the ranch’s owner: The 80-year-old Spahn, who was nearly blind, would have sex with any of the Manson Family “wives” whenever he wanted and the family would be able to live on the ranch for free. The teenage Fromme was Spahn’s favorite and she was assigned to serve as his “eyes” and de-facto wife. Spahn’s the one who gave her the nickname “Squeaky,” as Fromme squeaked whenever he pinched her thigh.

In 1969, Manson was arrested for the highly publicized Tate-LaBianca Murders in which Fromme was never implicated. During his trial in 1971, Squeaky Fromme held a vigil outside of the courthouse and argued against his incarceration. Manson was sentenced to death that year and in 1972 he was re-sentenced to life in prison after a court decision neutralized California’s death sentences. 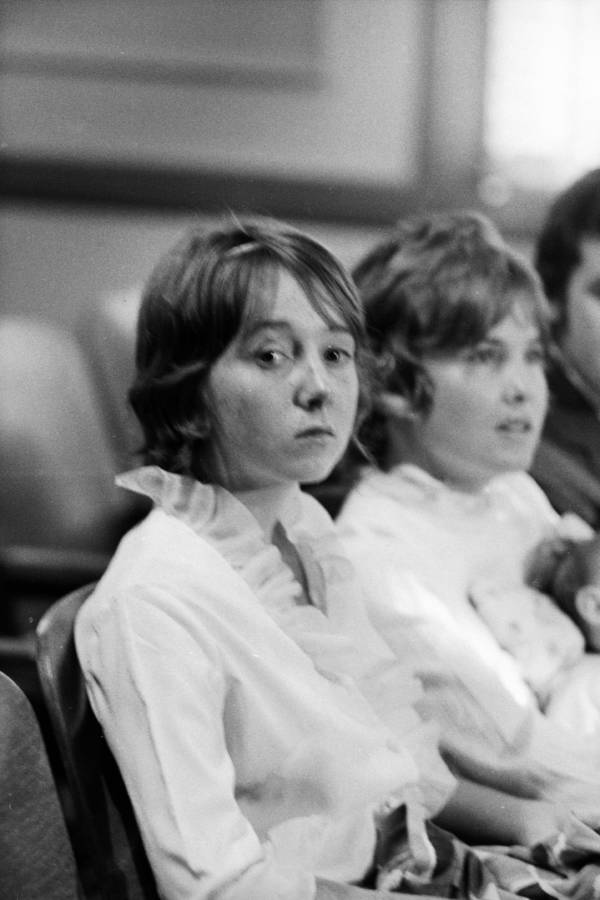 Following the fall of their leader, most of the outlying Manson Family members denounced their support of Manson. But Fromme never did. After Manson was moved to Folsom Prison, Fromme and fellow family member Sandra Good moved to Sacramento to remain close.

From the dilapidated apartment the two lived in, Squeaky began writing a memoir detailing her life with Manson. She wrote about how, from a young age, she wanted to be free and “[shed] all the guilt feelings.” Her goal in life was “to find something exciting and do something that felt good… I didn’t, I wouldn’t, adjust to society and the reality of things… I’ve made my own world… It may sound like an Alice in Wonderland world, but it makes sense.”

Time obtained a manuscript in 1975, but after discussing the matter with Steve “Clem” Grogan, Fromme decided not to publish it on the grounds that it was too incriminating.

Falling In With Another Bad Crowd 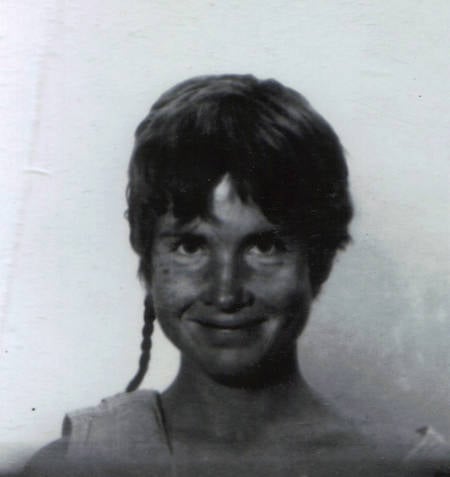 Despite Charles Manson’s imprisonment and the rest of the family’s denouncement of his teachings, Squeaky Fromme and Sandra Good continued to wreak havoc in his name.

In 1972, Fromme moved to Sonoma County and found herself caught up in another murder trial.

The group of people she had been living with had murdered a married couple during a Russian-roulette-style game gone wrong.

Squeaky Fromme denied involvement with the murder, claiming she had been on her way to visit Manson in jail as her alibi. She was held for more than two months on suspicion but was ultimately found innocent.

After the incident in Sonoma County, Fromme moved back in with Sandra Good in Sacramento and fell deeper into Manson’s cult teachings than ever before. She and Good changed their names, Fromme to “Red” and Good to “Blue,” and began wearing robes of their respective colors to represent their love of the California redwoods (Fromme) and the ocean (Good).

It was during this bout of existentialism that Fromme would finally end up in jail.

The Attempted Assassination Of Gerald Ford 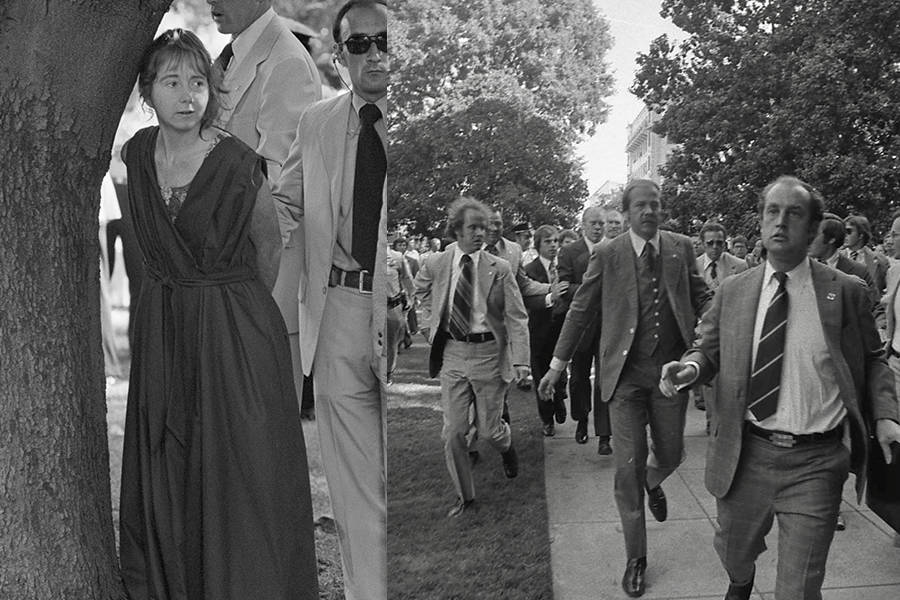 Getty Images/Wikimedia CommonsSqueaky Fromme is handcuffed after trying to assassinate President Gerald Ford who was rushed away from the scene.

While she watched the news one day, Lynette Fromme learned that President Gerald Ford would be speaking at the Sacramento Convention Center on the morning of Sept. 5, 1975. Ford had just asked Congress to relax provisions of the Clean Air Act, and Fromme — a tree-lover who feared automobile smog would wreak havoc on California’s coastal redwoods — wanted to confront him on the issue. The convention center was less than a mile from her apartment.

With an antique .45 caliber Colt pistol strapped to her left leg, and dressed in a bright red dress with a matching hood, Squeaky Fromme headed to the grounds outside the state capitol building, where the president headed after his breakfast speech. She pushed her way to the front until she was within a few feet of him.

Then, she raised her gun.

Those around her claim to have heard a “click,” but the gun never fired — it was unloaded. As Secret Service agents tackled her, Fromme could be heard marveling at the fact that the gun “never went off.”

She was arrested and taken into custody.

Gerald Ford, for his part, continued with his scheduled meeting and never mentioned the attempt on his life until after business had been discussed. During Fromme’s trial, he became the first U.S. President to testify in a criminal case when he submitted his video testimony.

In 2014, a judge ordered the release of the audio recordings of Fromme’s 1975 psychiatric evaluation. In the recordings, she says she thinks she has about a 70 percent chance of being found “not guilty.”

The Fate Of Squeaky Fromme

On November 19, 1975, Lynette “Squeaky” Fromme was convicted of attempting to assassinate the President of the United States. She was sentenced to life in prison. In 1987, she managed to escape for two days but was ultimately recaptured. The escape resulted in an extension of her sentence, but she remained eligible for parole. She was finally released in 2009.

Following her release, Fromme moved to Marcy, in upstate New York, and in with her boyfriend, a fellow convicted felon. A supposed Manson fanatic, he began writing to Fromme when they were both behind bars.

Over the years, Fromme has been portrayed in several movies and one Broadway musical. She published her memoir in 2018, called Reflexion. And just last month, Fromme spoke with ABC’s 1969 documentary series. “Was I in love with Charlie? Yeah,” she told them. “Oh yeah. Oh, still am. Still am. I don’t think you fall out of love.”

But for the most part, Fromme keeps a pretty low profile.

“[Squeaky and her beau] don’t get involved in drama,” one neighbor recently told the New York Post. “They’re not ones who are out [saying], ‘Oh, look who I am,’ bragging about their past.” For now, those interested in what’s left of the Manson Family will have to settle for the few photos taken by curious passersby and the thought that one still-devoted family member is roaming free.

After this look at Lynette Squeaky Fromme, read up on some chilling facts about Charles Manson. Then, check out some creepy quotes from Charles Manson himself.