19 Haunting Facts Behind The USS Constitution, America’s Most Important Warship

From her battles with pirates to the ghosts that walk her deck, these are the most amazing USS Constitution facts.

During the War of 1812, the United States’ small and relatively new navy was taking a major beating at the hands of the powerful British. The U.S. needed a victory, and the USS Constitution would help provide one.

In August 1812, she met head on with Britain’s HMS Guerriere and astonished sailors on both sides with her resilience. When British cannonballs bounced off the Constitution’s hull, one British sailor was said to have exclaimed “Her sides are made of iron!” From there, it was more wartime heroics, battles with pirates, and the most venerated career of any U.S. warship.

The Constitution quickly gained mythical status, and–like so many other revered relics–it also soon gained a reputation for being haunted. It’s no surprise then that Syfy’s Ghost Hunters recently ventured inside this fabled ship, whose story is woven into the very fabric of American history. In the words of Ghost Hunter Dustin Pari: “Knowing the history of this ship lends to the sensation of walking amongst the ghosts of our American history.”

Walk amongst the ghosts yourselves with these unbelievable USS Constitution facts and photos: 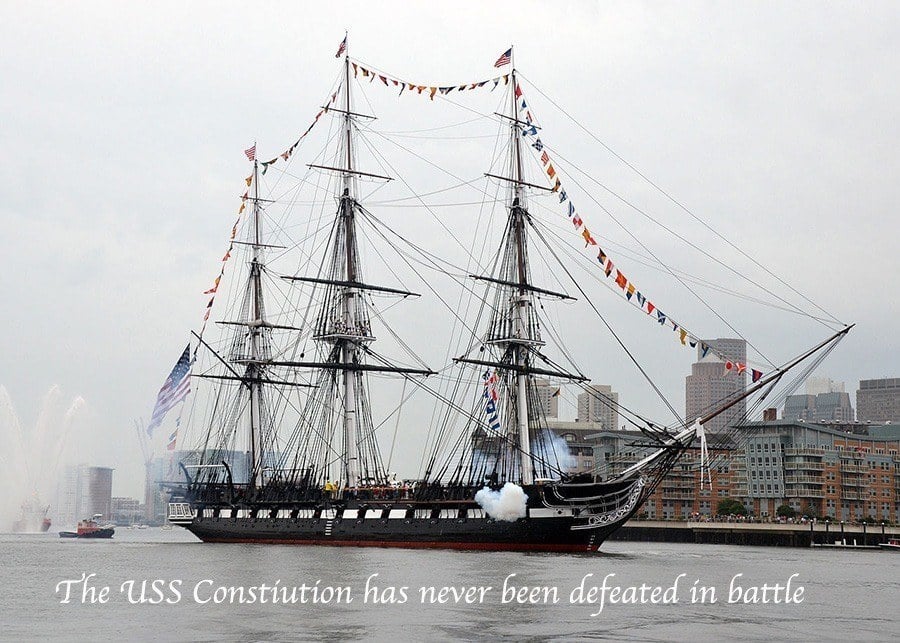 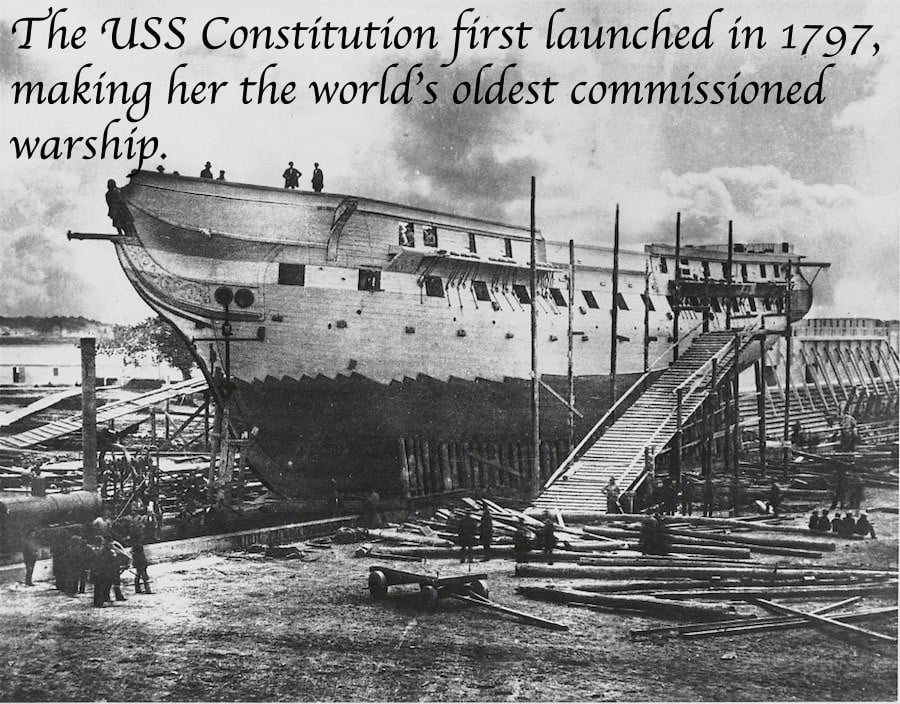 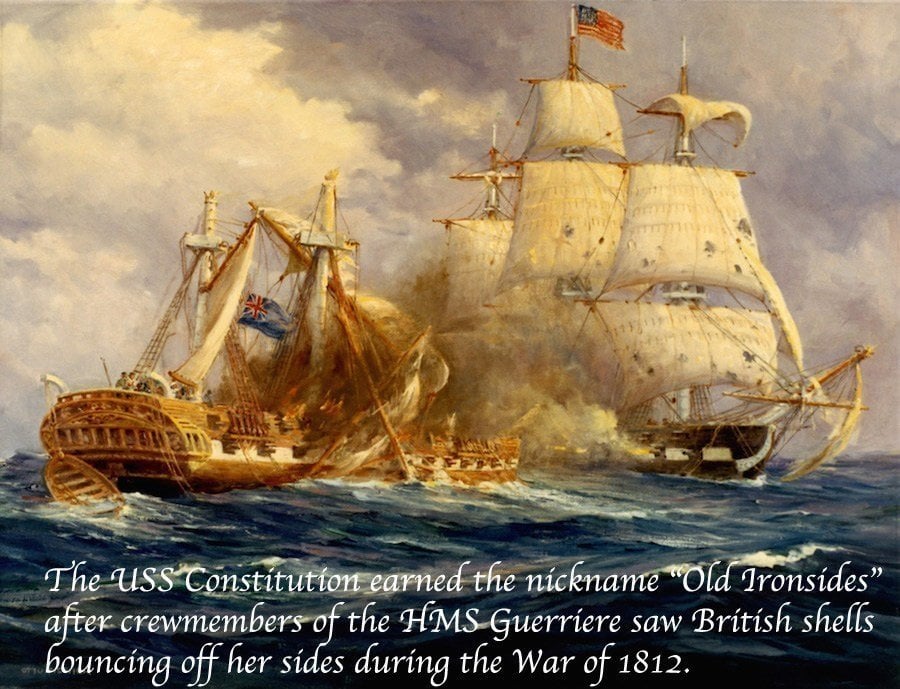 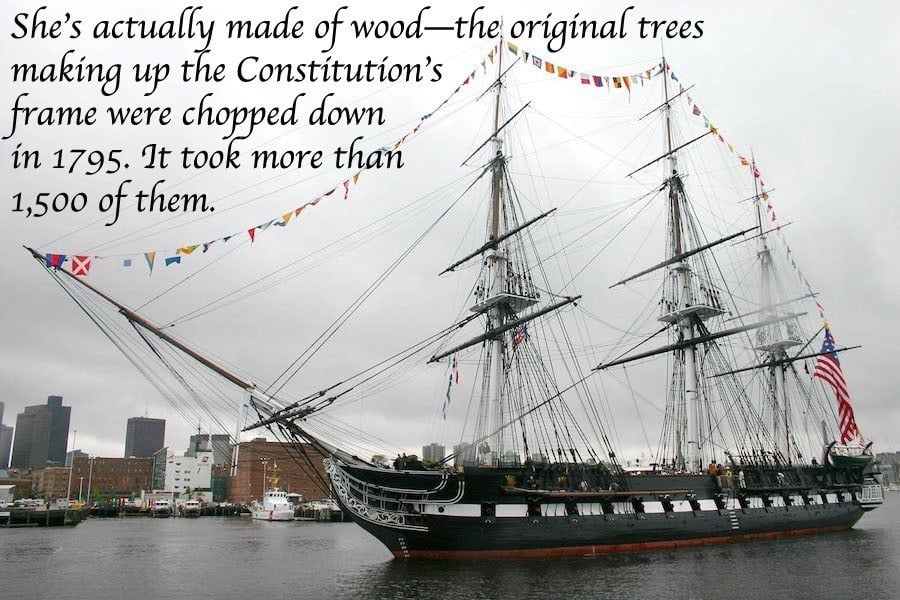 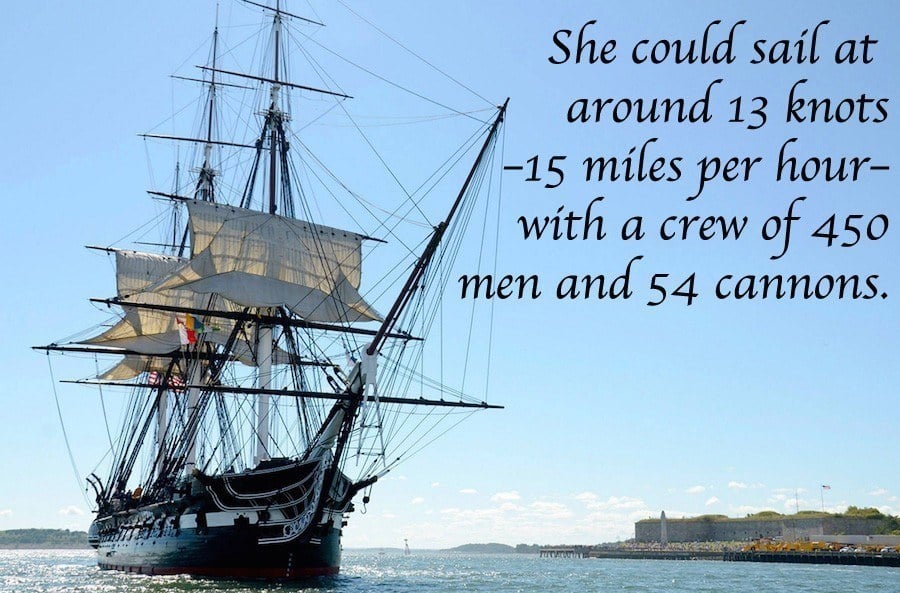 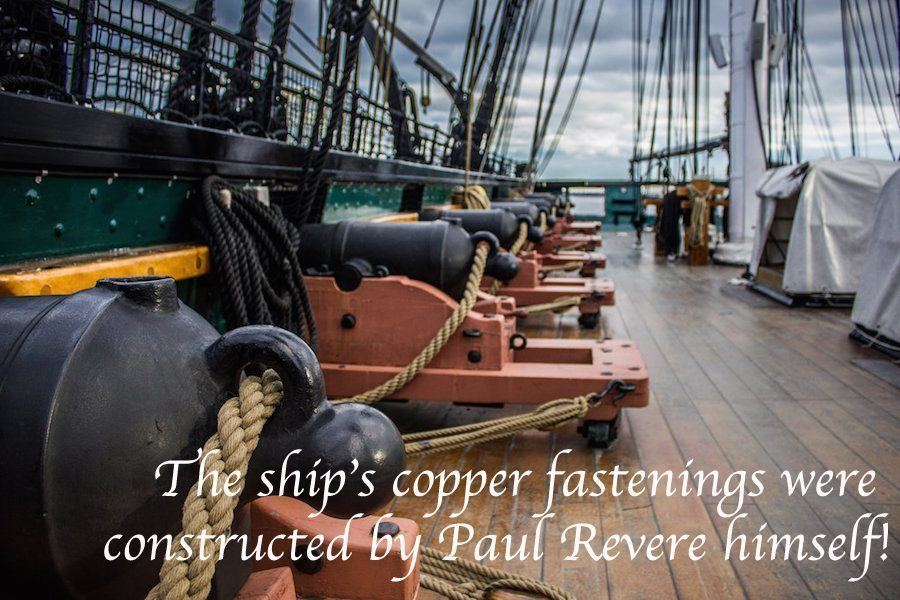 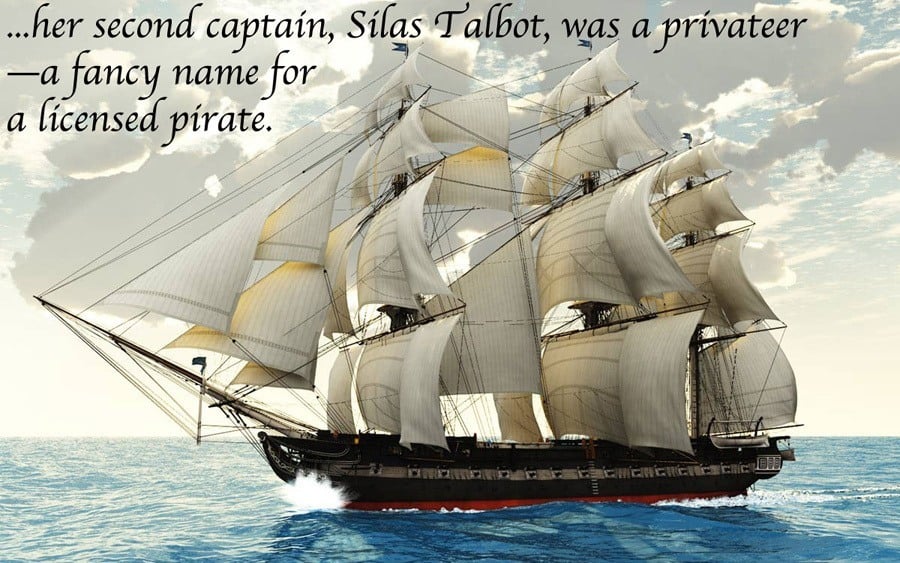 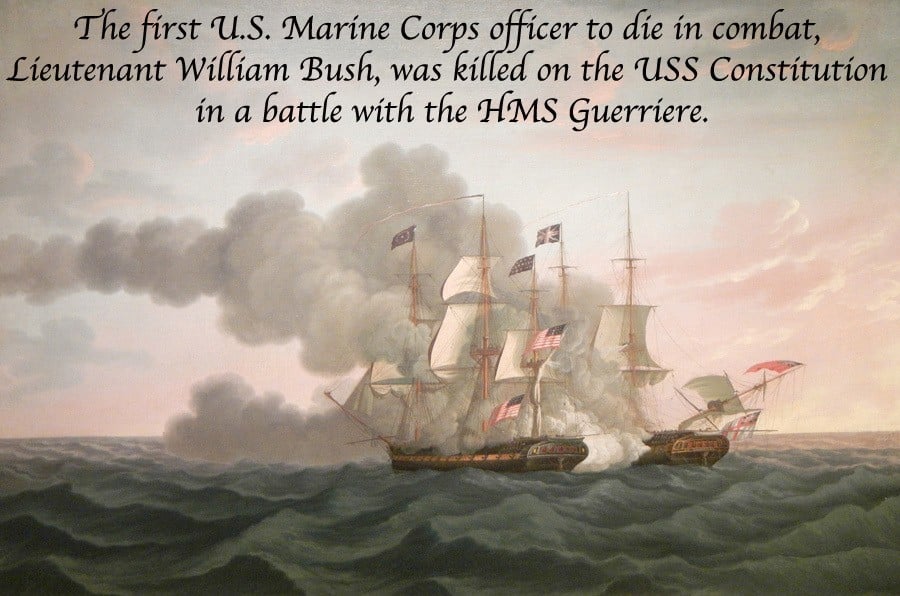 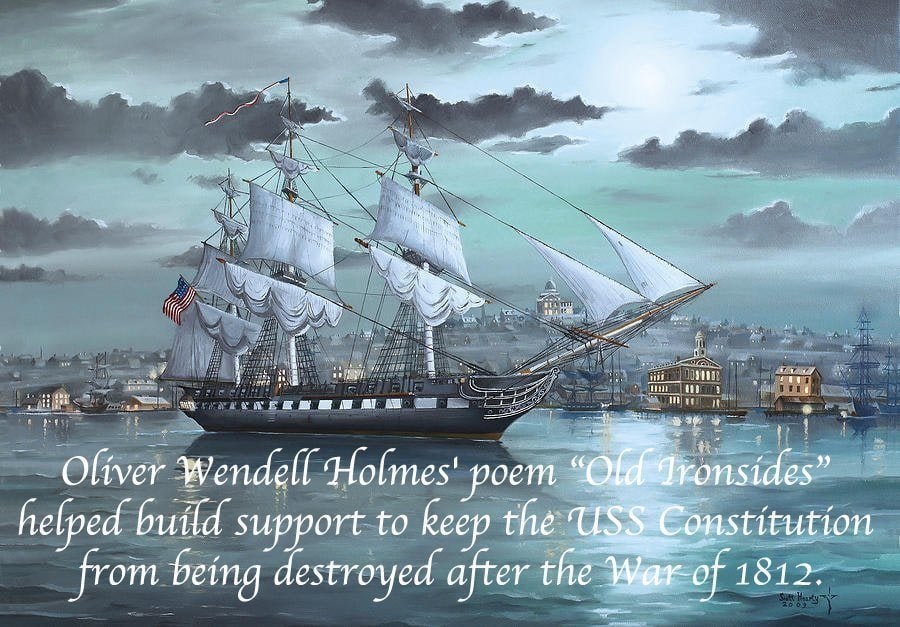 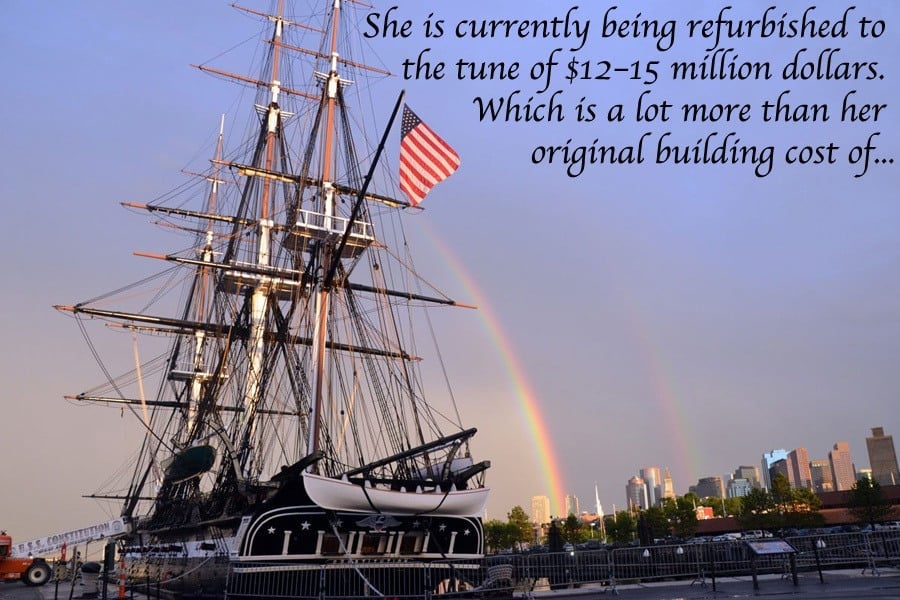 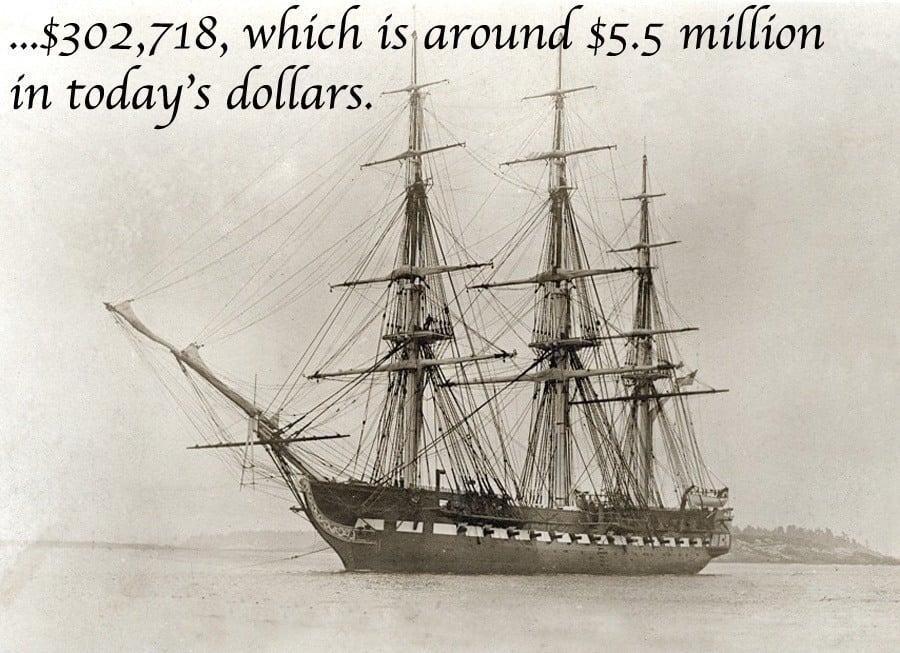 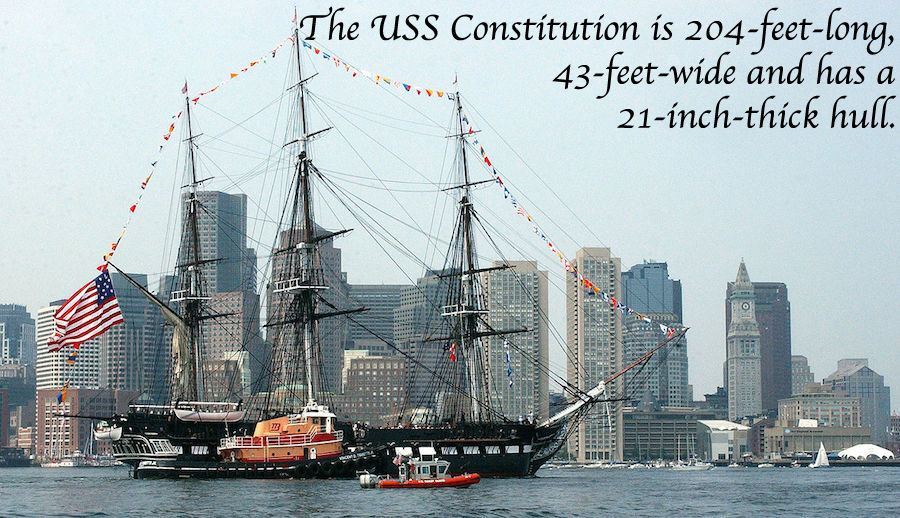 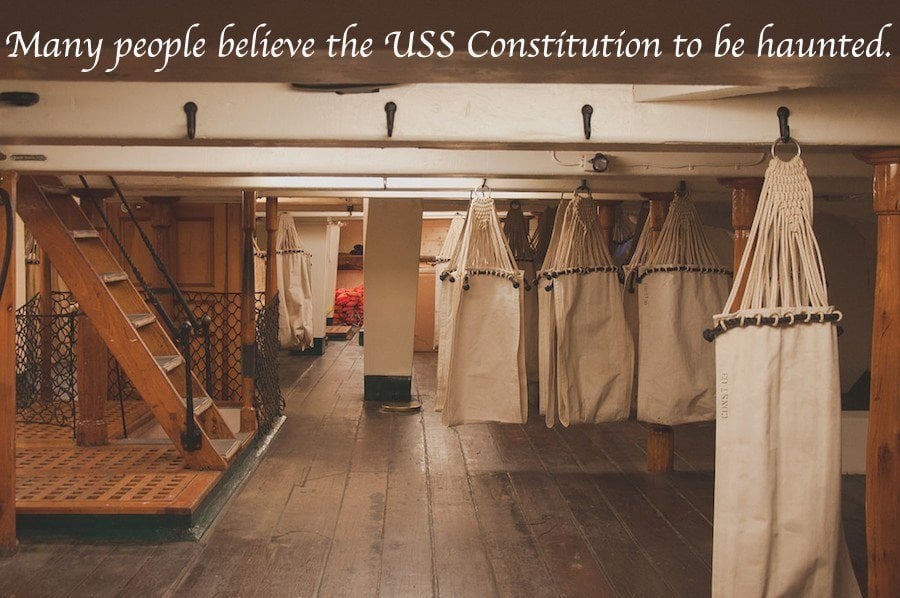 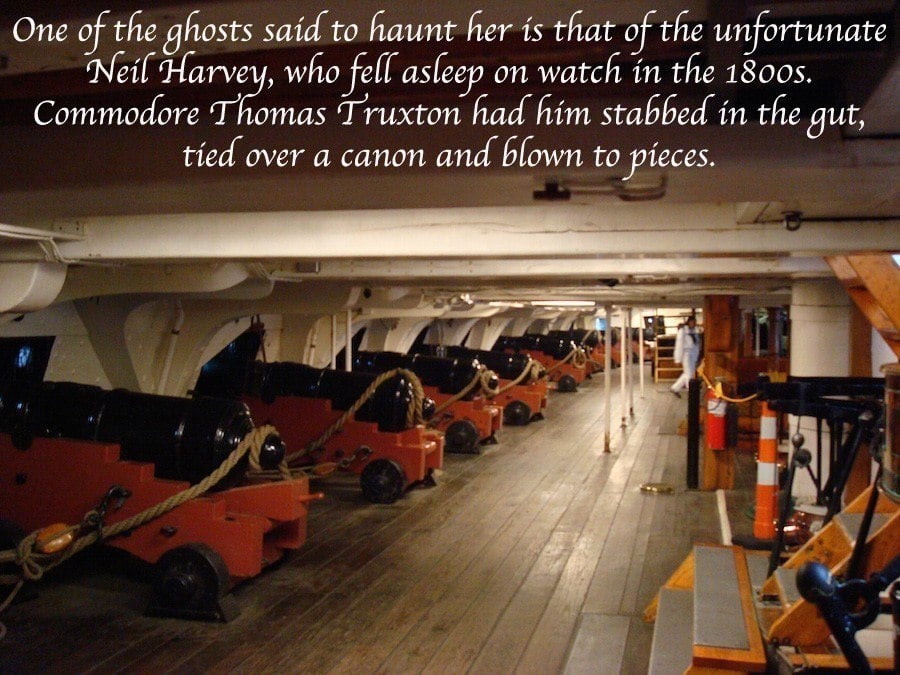 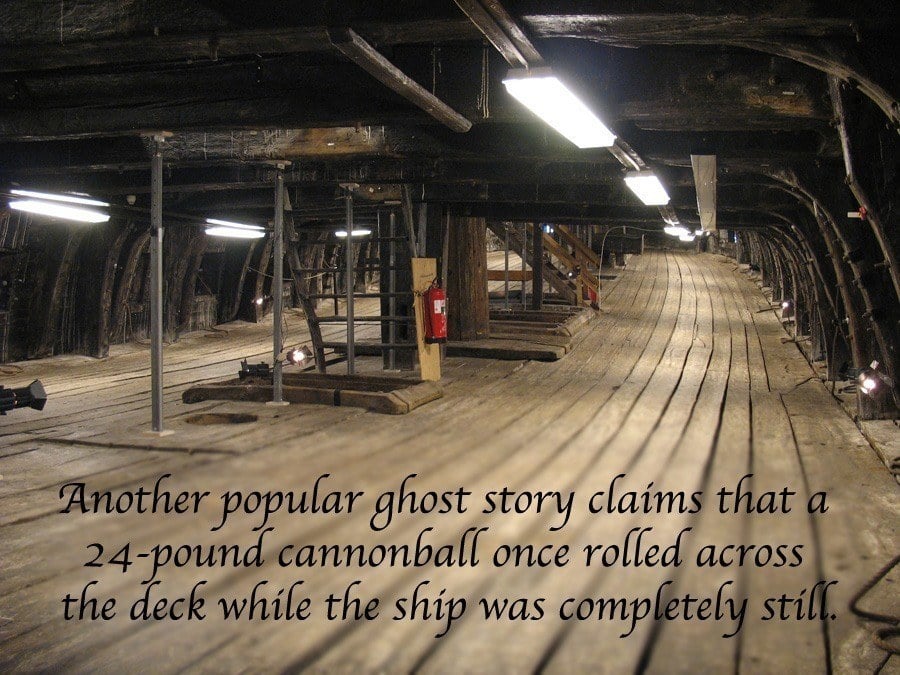 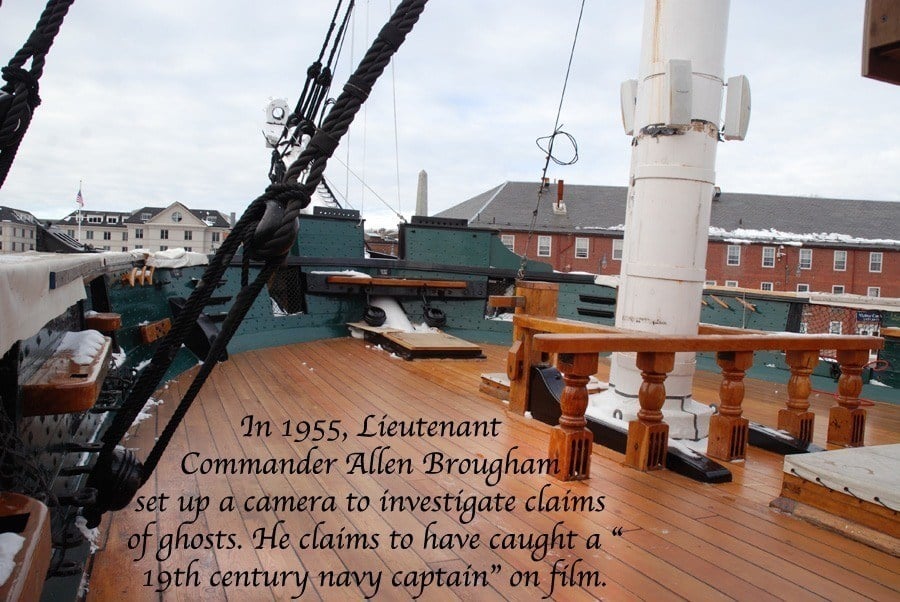 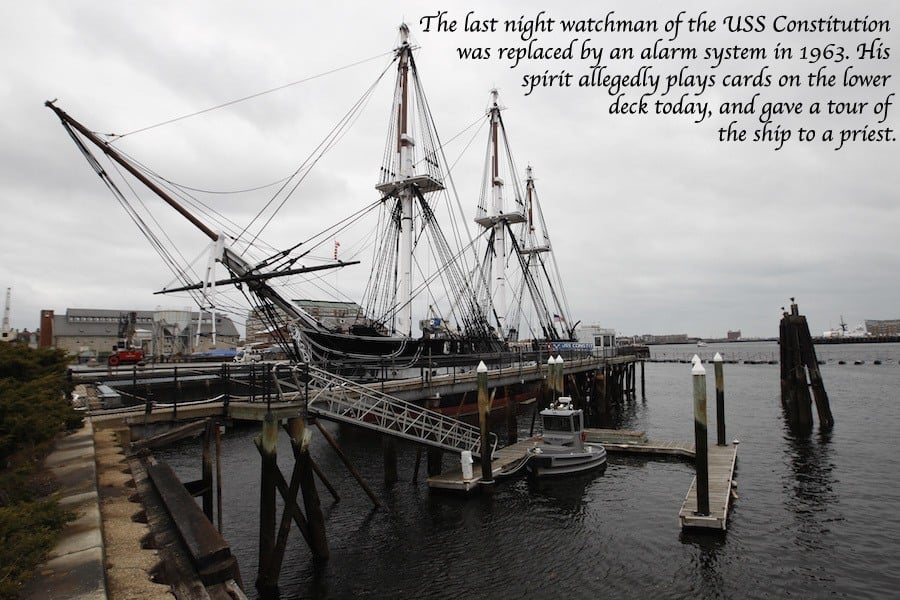 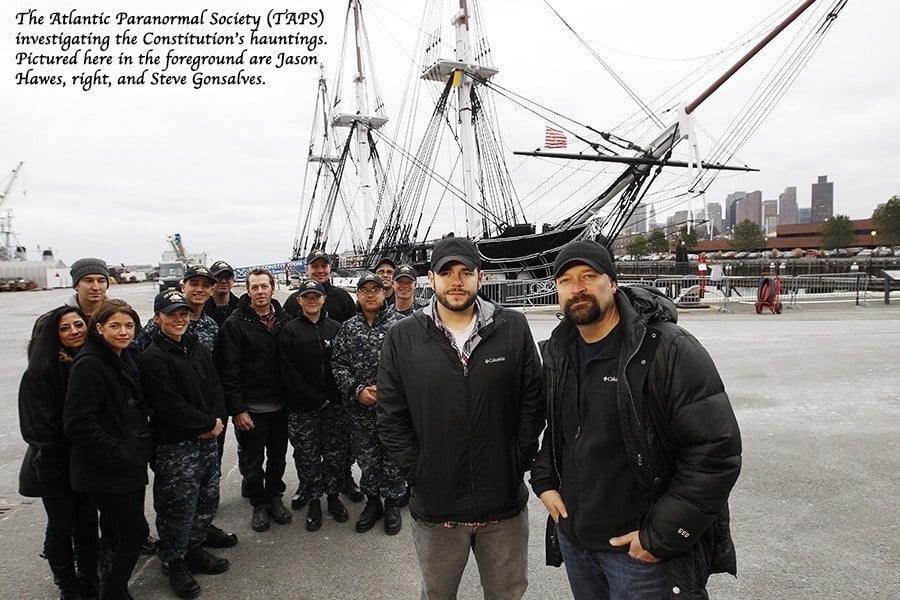 1 of 20
The USS Constitution has never been defeated in battle.Wikipedia
2 of 20
The USS Constitution first launched in 1797, making her the world's oldest commissioned warship.Wikipedia
3 of 20
The USS Constitution earned the nickname "Old Ironsides" after crewmembers of the HMS Guerriere saw British shells bouncing off her sides during the War of 1812.Triposo
4 of 20
She's actually made of wood -- the original trees making up the Constitution's frame were chopped down in 1795. It took more than 1,500 of them.Wikipedia
5 of 20
She could sail at around 13 knots -- 15 miles per hour -- with a crew of 450 men and 54 cannons.Boston Magazine
6 of 20
The ship's copper fastenings were constructed by Paul Revere himself!DeviantArt
7 of 20
The treaty that ended the First Barbary War between the U.S. and the Barbary Pirates was signed onboard the USS Constitution. Which is odd because...WarriorGirl13
8 of 20
Her second captain, Silas Talbot, was a privateer -- a fancy name for a licensed pirate.Poesy plus Polemics
9 of 20
The first U.S. Marine Corps officer to die in combat, Lieutenant William Bush, was killed on the USS Constitution in a battle with the HMS Guerriere.Homeless and Loving It!
10 of 20
Oliver Wendell Holmes' poem "Old Ironsides" helped build support to keep the USS Constitution from being destroyed after the War of 1812.SpanishDict
11 of 20
she is currently being refurbished to the tune of $12-15 million dollars. Which is a lot more than her original building cost of...Military
12 of 20
...$302,718, which is around $5.5 million in today's dollars.SuggestsKeyword
13 of 20
The USS Constitution is 204-feet-long, 43-feet-wide and has a 21-inch-thick hull.Wikimedia Commons
14 of 20
Many people believe the USS Constitution to be haunted.Flickr
15 of 20
One of the ghosts said to haunt her is that of the unfortunate Neil Harvey, who feel asleep on watch in the 1800s. Commodore Thomas Truxton had him stabbed in the gut, tied over a cannon and blown to pieces.Why the Hell Not?: Travel
16 of 20
Another popular ghost story claims that a 24-pound cannonball once rolled across the deck while the ship was completely still.Wikipedia
17 of 20
In 1955, Lieutenant Commander Allen Brougham set up a camera to investigate claims of ghosts. He claims to have caught a "19th century navy captain" on film.PixShark
18 of 20
The last night watchman of the USS Constitution was replaced by an alarm system in 1963. His spirit allegedly plays cards on the lower deck today, and gave a tour of the ship to a priest.Cheryl Senter/Syfy
19 of 20
The Atlantic Paranormal Society (TAPS) investigating the Constitution's hauntings. Pictured here in the foreground are Jason Hawes, right, and Steve Gonsalves.Cheryl Senter/Syfy
20 of 20 The Ghost Hunters investigation of the USS Constitution, “Rockets Red Scare,” premieres Wednesday, November 11 at 9/8c on Syfy (check out a sneak peak below). Find more info at the official Ghost Hunters page or on their Twitter feed.

Prepare to be scared with more haunted sites and ghost-filled locales, including a trip inside the real-life Shining hotel.