You've heard about his brutal crimes and cannibalism — but who is Jeffrey Dahmer and how did he become one of the most notorious serial killers in American history? 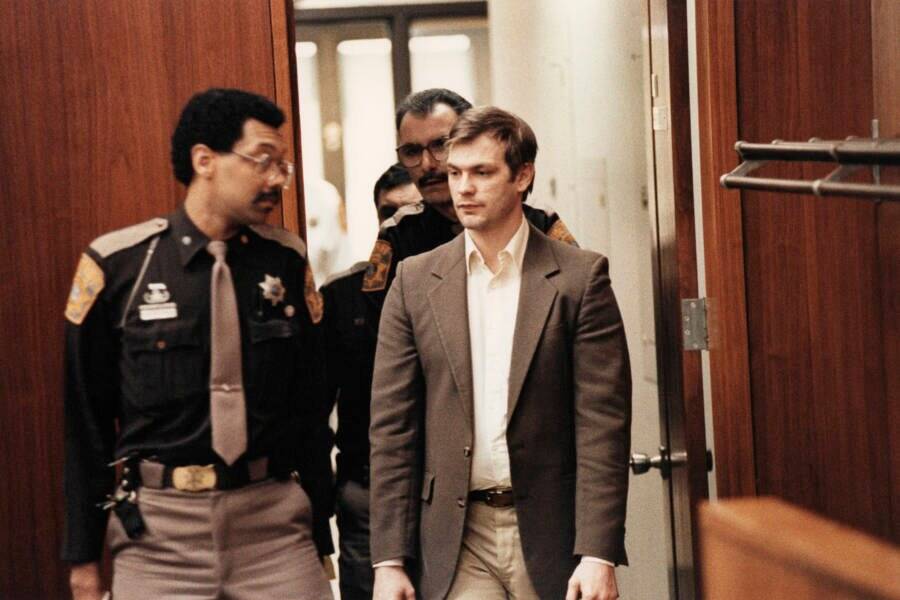 Of all the serial killers in American history, Jeffrey Dahmer may be the most terrifying. Between 1978 and 1991, he not only viciously murdered 17 young men and boys but also dismembered and cannibalized some of them. So who is Jeffrey Dahmer, exactly?

After Dahmer’s arrest in 1991, when his crimes came to light, many asked that same question. How did a quiet boy from Wisconsin develop such an appetite for murder? Why did he kill? And what drove him to eat his victims?

Below, look through 25 of the most frequently asked questions about the serial killer, from his first victim to his own shocking death in 1994.

Who Is Jeffrey Dahmer?

Born on May 21, 1960, in Milwaukee, Wisconsin, Jeffrey Lionel Dahmer was an American serial killer who operated between 1978 and 1991. Dubbed the “Milwaukee Monster,” he murdered at least 17 boys and young men between the ages of 14 and 32, some of whom he met at nightclubs or bars.

After his arrest in 1991, Dahmer was found guilty of multiple murders and sentenced to life in prison. However, he was killed by a fellow inmate in 1994.

How Many Animals Did Jeffrey Dahmer Kill?

Most accounts state that Dahmer only killed one animal — a tadpole he’d given to a grade-school teacher, who then gave it to a different student. AETV reports that Dahmer was so enraged about the regifting that he went to the other child’s house, poured gasoline on the tadpole, and lit it on fire.

That said, Dahmer did have a fascination with animals that were already dead. AETV additionally reports that he and his father used bleach to remove hair and tissue from dead rodents they found near their house. In addition, Dahmer once impaled the carcass of a dog he found and showed his friends the grisly sight, but the animal was already dead by that point.

What Did Jeffrey Dahmer’s Father Do For A Living?

The serial killer’s father, Lionel Dahmer, spent much of his son’s childhood pursuing his doctorate, which meant that he was often busy and away from home. He later established a career as a research chemist.

What Did Jeffrey Dahmer’s Dad Say About Him?

Lionel Dahmer supported his son, even after learning about his murders.

“We’ve gotten very close since his… arrest,” he told Oprah Winfrey in 1994. “I still love my son. I’ll always stick by him — I always have.” 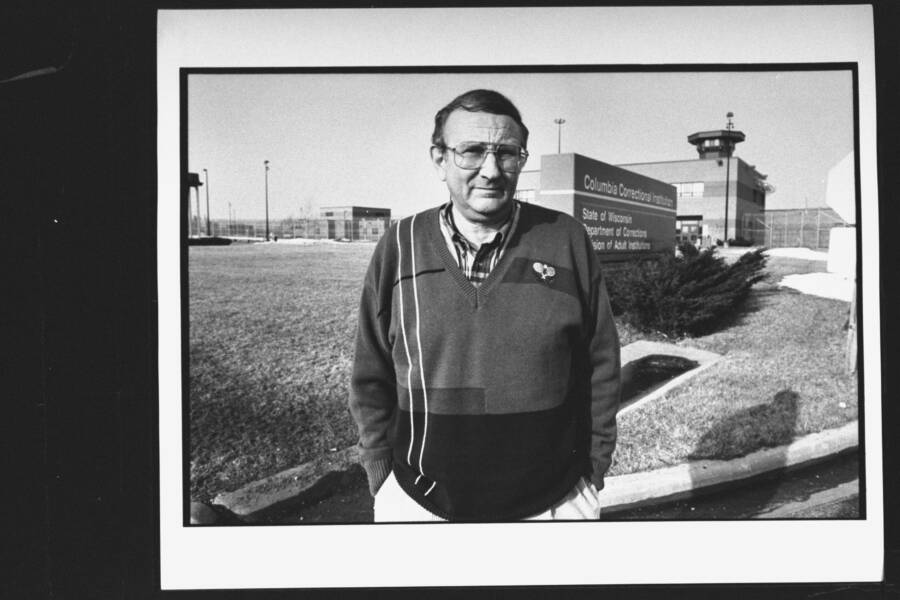 He wondered — like many others — why Dahmer had become a killer.

“I considered all kinds of things,” Lionel explained. “Was it environmental, genetic? Was it, perhaps, medications that were taken at the time of — you know, in [his mother’s] first trimester? Was it the effect of, you know, the popular subject now, media violence?”

His son’s death in 1994 “gravely” impacted him but Lionel told Larry King, as reported by TODAY, that he’d never thought about changing his last name.

What Happened To Jeffrey Dahmer’s Grandmother?

Jeffrey Dahmer’s grandmother, Catherine, died on December 25, 1992, at age 88. But she played an important role in her grandson’s early life.

Dahmer lived at her Wisconsin home on and off in the 1980s. During that time, Dahmer dismembered one of his victims in her basement — who he’d killed elsewhere — and murdered three more beneath her feet.

Did Jeffrey Dahmer Kill His Brother?

No, Jeffrey Dahmer did not kill his brother, David Dahmer. But the two siblings did have a very complicated relationship.

More than six years younger than Jeffrey, David was often the subject of his brother’s jealousy and resentment. Jeffrey allegedly felt that his brother had “stolen away” some of his parents’ love and affection.

And unlike their father, David wanted nothing to do with the Dahmer name once Jeffrey’s crimes came to light. After graduating from college, he changed his name. Since then, he’s avoided the spotlight.

As of December 2022, Lionel Dahmer is still alive and in his 80s. However, Jeffrey Dahmer’s mother, Joyce Dahmer, died in 2000.

How Did Jeffrey Dahmer’s Mother Die?

Joyce Dahmer died of breast cancer. She was 64 years old.

Why Did Jeffrey Dahmer Get Kicked Out Of The Army?

Military.com reports that Jeffrey Dahmer served in the U.S. Army between January 1979 and March 1981, during which time he trained in Texas and was stationed as a combat medic in West Germany.

Though he was considered an “average or slightly above average” soldier, Dahmer had a noticeable drinking problem that got worse as time went on. In 1981, he received an honorable discharge because his superiors decided that his drinking negatively impacted his ability to serve.

While he was stationed in Europe, Dahmer also reportedly indulged in some of his violent sexual fantasies. He allegedly raped two of his fellow soldiers, Billy Joe Capshaw and Preston Davis.

Yes, Jeffrey Dahmer was gay. Dahmer described himself as gay to a judge in 1989 (when he was found guilty of sexual assault and enticing a child for immoral purposes). Dahmer and his mother also had conversations about his “gayness.” In addition, he told a probation officer in 1991 that he’d “admitted to [him]self he is gay.”

That said, it doesn’t appear that Dahmer ever had a serious relationship. Indeed, he expressed loneliness as one of his motivations to kill.

Who Did Jeffrey Dahmer First Kill?

In June 1978, Dahmer murdered his first victim, 18-year-old Steven Hicks. He picked up Hicks while the teen was hitchhiking to a rock concert, and took him back to the Dahmer family home in Bath Township, Ohio. 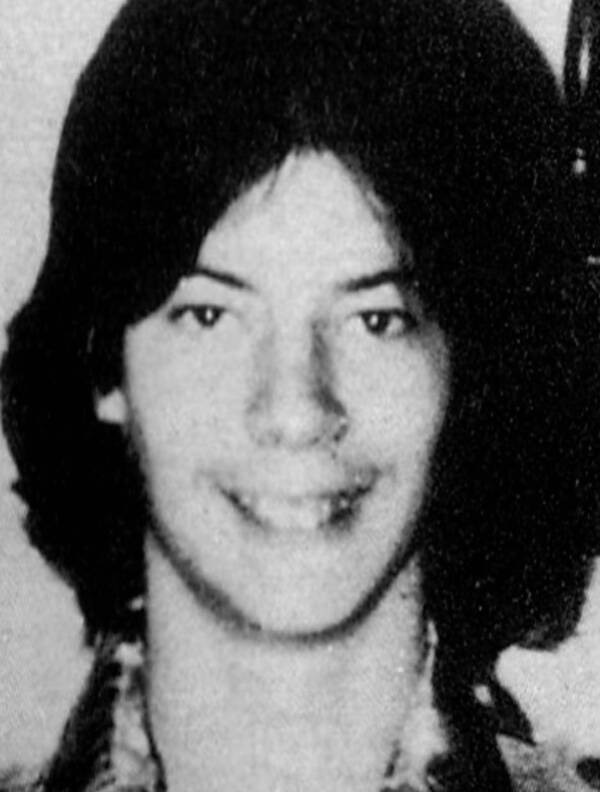 TwitterDahmer’s first victim, Steven Hicks, was just 18 when he was murdered.

But when Hicks tried to leave, Dahmer beat him with a barbell and strangled him. He later said that Hicks’ murder “was not planned,” though he admitted that he’d had fantasies of picking up a hitchhiker and “controlling” him.

How Many People Did Jeffrey Dahmer Kill?

Steven Hicks was the first, but far from the last, of Jeffrey Dahmer’s victims. Dahmer would kill 16 more, bringing his total victim count up to 17.

Where Did Jeffrey Dahmer Kill?

Aside from Steven Hicks, who Dahmer killed in Ohio, most of the serial killer’s victims were murdered in Milwaukee, Wisconsin. Dahmer killed 12 of his 17 victims at his apartment at 924 North 25th Street in Milwaukee.

Why Did Jeffrey Dahmer Kill Only Black Men?

Jeffrey Dahmer did not kill only Black men, though many of his victims were racial and ethnic minorities. Eleven of Dahmer’s victims were Black, and others were white, Indigenous, Asian, and Latino.

One opinion piece in The Washington Post argues that Dahmer was able to get away with his gruesome crimes for so long because of his tendency to prey on men and boys in minority communities.

Yes, he did kill a deaf man, and his name was Tony Hughes. Dahmer met the 31-year-old at a Milwaukee gay bar and invited him back to his apartment. There, Dahmer drugged and strangled him.

No. All of Jeffrey Dahmer’s known victims were male.

Did Jeffrey Dahmer Eat People? Why?

Yes, Jeffrey Dahmer was a cannibal who ate some of his victims. Why? He later told Inside Edition that his habit of eating victims started in 1990.

“I was branching out, that’s when the cannibalism started,” Dahmer explained. “The eating of the heart and the arm muscle. It was a way of making me feel that [my victims] were a part of me.”

He added: “I had these obsessive desires and thoughts about wanting to control them, to, I don’t know how to put it, possess them permanently. Not because I was angry with them, not because I hated them, but because I wanted to keep them with me. As my obsession grew, I was saving body parts such as skulls and skeletons.”

How Many People Did Jeffrey Dahmer Eat?

How Was Jeffrey Dahmer Finally Caught?

Jeffrey Dahmer was arrested on July 22, 1991, after his would-be victim Tracy Edwards managed to escape from his apartment and flag down the police. Edwards explained that he’d agreed to pose nude for Dahmer for money, but Dahmer had handcuffed him and threatened him with a knife instead.

“Dahmer told me that he would kill me,” Edwards later said of the harrowing encounter, according to PEOPLE. “He was listening to my heart because at a point, he told me he was going to eat my heart.”

Jeffrey Dahmer went to prison after his arrest in 1991. He was 31 years old.

Did Jeffrey Dahmer Get The Death Sentence? 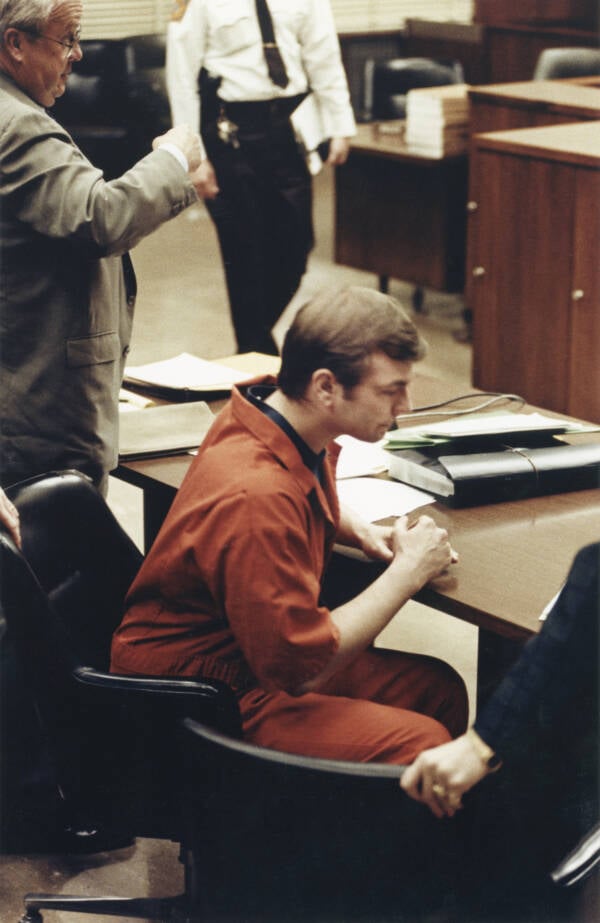 Curt Borgwardt/Sygma/Sygma via Getty ImagesJeffrey Dahmer was sentenced to life in prison for his crimes.

No, the serial killer did not get the death sentence, because it’s not available in Wisconsin. After being convicted of multiple homicides, he was handed 15 life sentences, ensuring he’d never see the light of day again.

No. Jeffrey Dahmer died on November 28, 1994, during his imprisonment at the Columbia Correctional Institution in Portage, Wisconsin.

How Did Jeffrey Dahmer Die?

Jeffrey Dahmer was beaten to death near a locker room in the prison by a fellow inmate, who used a 20-inch metal bar as the murder weapon.

Who Killed Jeffrey Dahmer And Why?

Jeffrey Dahmer was killed by a fellow prisoner named Christopher Scarver. Scarver claimed that Dahmer would taunt the other prisoners by using ketchup to recreate severed limbs with his food. In Scarver’s telling, things came to a head when they were both assigned to clean a prison gymnasium. Near a locker room, Scarver confronted Dahmer about his crimes.

“I asked him if he did those things ’cause I was fiercely disgusted,” Scarver later claimed. “He was shocked. Yes, he was… He started looking for the door pretty quick. I blocked him.”

Scarver then fatally beat Dahmer — and another inmate cleaning the gymnasium. He later said that God told him to kill Dahmer. “Some people who are in prison are repentant,” he said. “[B]ut he was not one of them.”

What Happened To Jeffrey Dahmer’s Glasses? 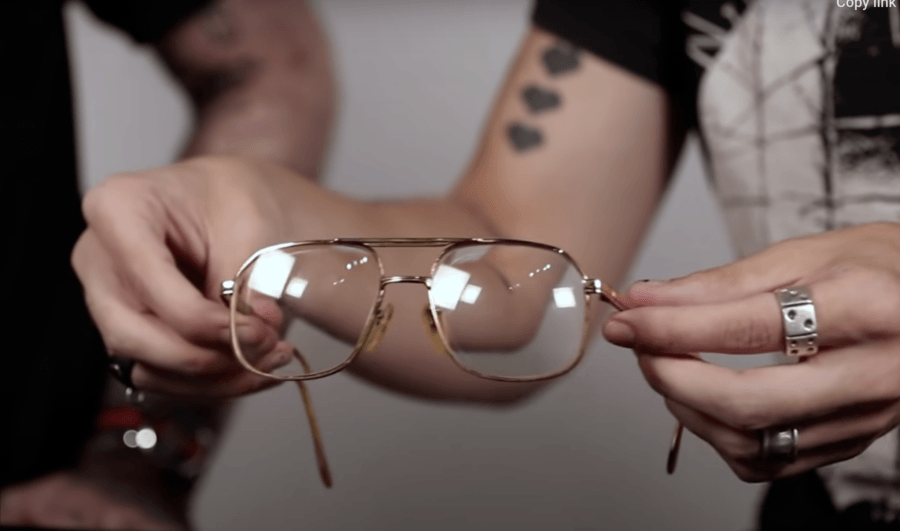 Dahmer was known for wearing glasses, so what became of them? Apparently, he’d left his last pair in his prison cell before Scarver murdered him. Dahmer’s glasses were in his family’s possession until a housekeeper sold them to a “murderabilia” site called Cult Collectibles.

After reading these disturbing facts about Jeffrey Dahmer, discover the true story behind serial killer Ted Bundy. Then, look through these chilling images from serial killers’ homes.