In the early hours of September 30, 1888, Catherine Eddowes was found murdered in London's Mitre Square. Her body had been severely mutilated — and her left kidney had been removed. 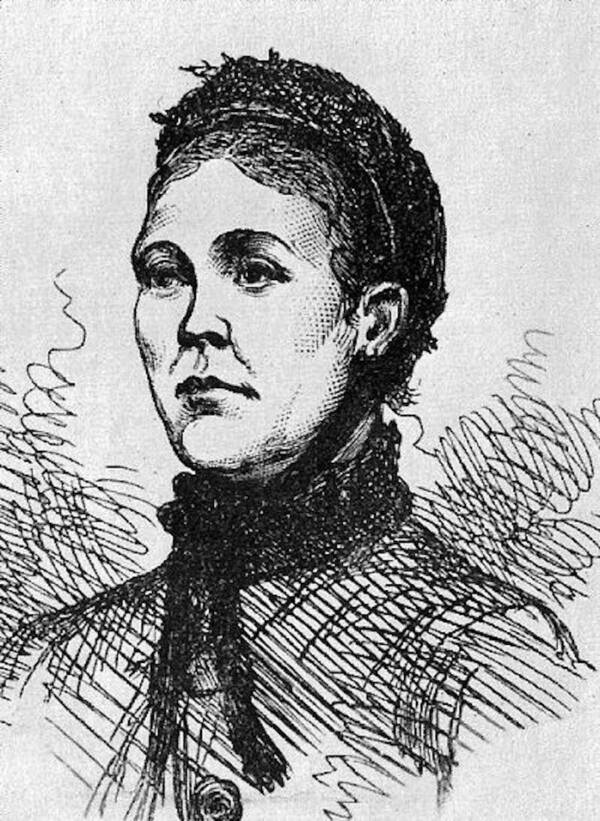 Wikimedia CommonsAn illustration of what Catherine Eddowes looked like while she was alive. 1888.

As Jack the Ripper’s fourth known victim, Catherine Eddowes faced a gruesome death. Wandering the streets of London on a fateful night, the 46-year-old had no idea that she was about to meet a monster.

On September 30, 1888, her mutilated corpse was found in London’s Mitre Square by police officer Edward Watkins. The grisly discovery was made all the more disturbing by the fact that Watkins — and other night watchmen — had not seen anything amiss in the square before the murder. Eddowes’ killer had struck quickly and quietly before vanishing into the night.

Although Jack the Ripper had already killed at least three other women, the degree to which Eddowes had been tortured was especially shocking to the public. As London went on high alert, the murder of Eddowes stayed at the forefront of many residents’ minds. And in the following years, this brutal slaying would go on to define the terrifying legacy of the serial killer.

The Tragic Story Of Catherine Eddowes 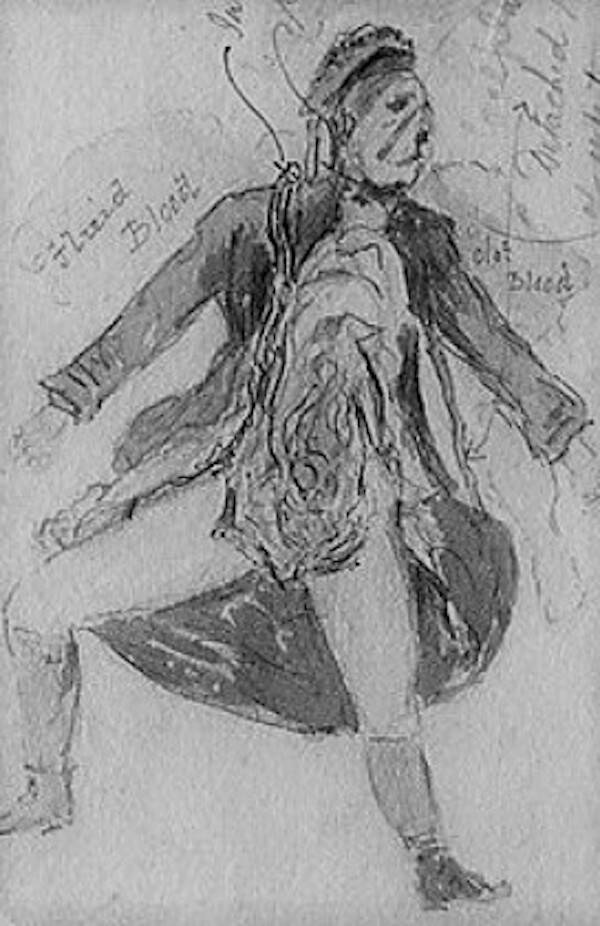 Born in 1842 in England, Catherine Eddowes was the daughter of a tin plate worker. Not much is known for sure about her early life, as contemporary newspapers gave varying accounts of her history.

Though Eddowes clearly had financial difficulties, her friends and family members described her as a “very jolly woman,” who was often heard singing. While some sources described her as a “prostitute,” her relatives were adamant that she was not a sex worker. However, some of her loved ones did claim that she had a drinking problem.

On September 29, 1888, the day before her murder, Eddowes was supposed to travel to Bermondsey to borrow money from her daughter. Eddowes’ partner, a man named John Kelly, had parted ways with her that afternoon. He planned to reunite with her later in the evening.

In an interview with The Star on October 3, Kelly said, “When she did not come home at night I didn’t worry, for I thought her daughter might have asked her to stay over Sunday with her.”

Kelly didn’t know it at the time, but he would never see Eddowes again. 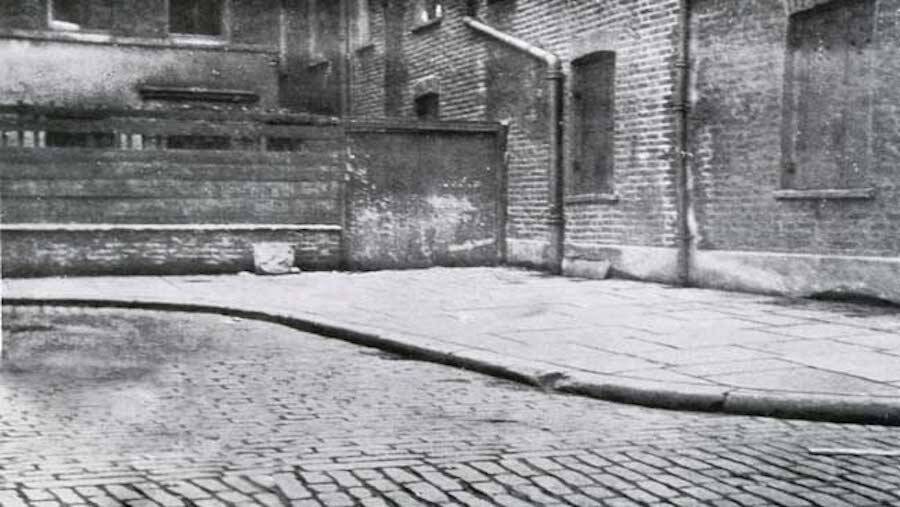 Wikimedia Commons The area in Mitre Square where Catherine Eddowes’ body was found.

That same evening around 8:30 p.m., a police officer named Louis Robinson encountered a crowd of people hovering over a woman who was lying drunk on the ground. That woman was Catherine Eddowes, who had parted ways with Kelly just hours earlier. Robinson took Eddowes to Bishopsgate Police Station and detained her as she slept off her intoxication.

By about 12:15 a.m., Eddowes was awake and singing in the station. Before long, she began complaining about being detained, lamenting that she’d be in trouble when she got home.

The police finally released her at about 1 a.m., right around the time when other officers were discovering the body of Elizabeth Stride.

Unbeknownst to Eddowes, Jack the Ripper had murdered Stride earlier that same night. But because he was almost caught mid-crime, he didn’t have time to mutilate her like he did with his other victims.

And so when he found the vulnerable Catherine Eddowes wandering toward Mitre Square, he made sure no one was looking when he viciously attacked. 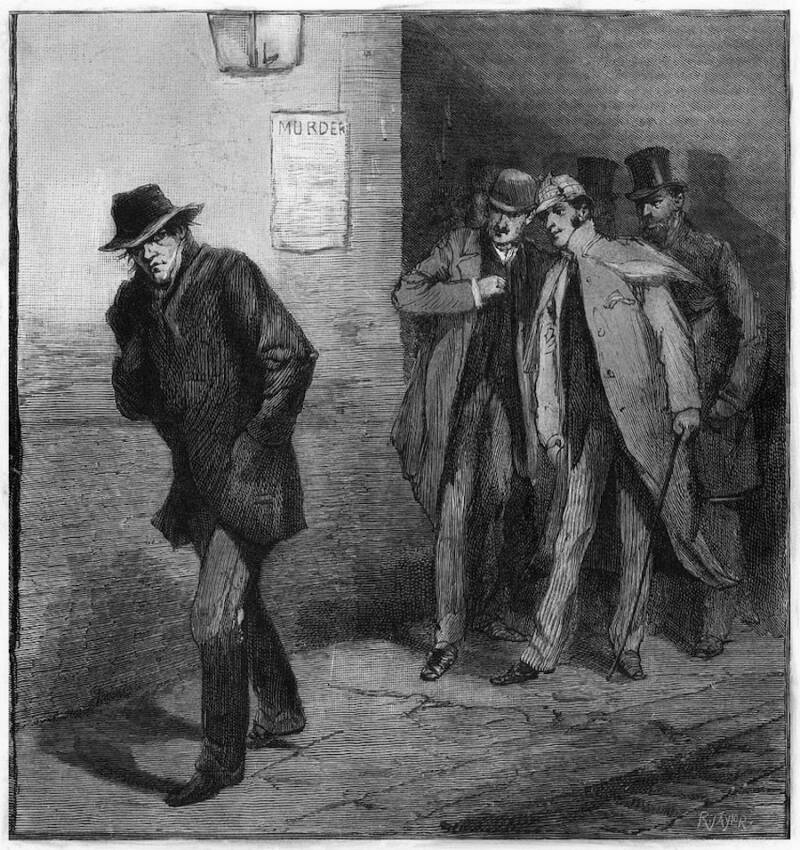 Wikimedia Commons A contemporary illustration of Jack the Ripper. To this day, the killer has never been officially identified.

About 35 minutes after Catherine Eddowes left police custody, three witnesses saw her walking with a mysterious man — and she was never seen alive again.

In the early morning hours of September 30, 1888, Eddowes’ body was found in Mitre Square. Her throat had been slashed, and her abdomen had been carved open. Eerily, her left kidney had been removed.

Dr. Frederick Gordon Brown, the City Police Surgeon who performed the autopsy, noted that Eddowes’ face “was very much mutilated.”

Both eyelids were cut through, and the tip of the nose was all but removed by an “oblique cut from the bottom of the nasal bone to where the wings of the nose join on to the face.”

This same cut “divided the upper lip and extended through the substance of the gum over the right upper lateral incisor tooth.” Additionally, portions of each cheek had been peeled upwards. 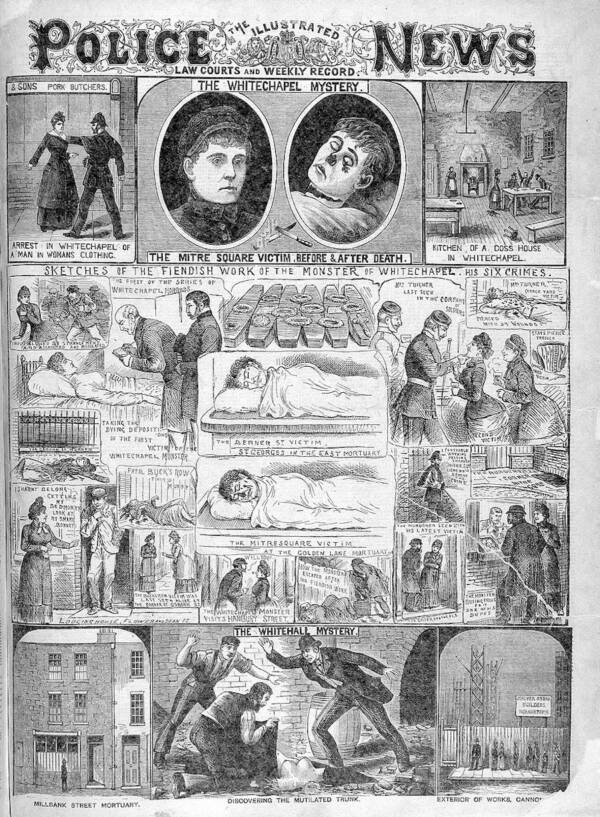 The state of the rest of the corpse was even more grisly: “The intestines were drawn out to a large extent and placed over the right shoulder — they were smeared over with some feculent matter. A piece of about two feet was quite detached from the body and placed between the body and the left arm, apparently by design.”

By that point, Jack the Ripper had already killed at least three other women in England. But so far, this murder was the grisliest — especially since Catherine Eddowes was the first victim with severe facial injuries.

Not only did this murder show the brutality of Jack the Ripper, it also showed his willingness to kill even if he was at risk of getting caught.

If Jack the Ripper was forced to abandon his third victim before he got the chance to mutilate her, this suggests that he narrowly evaded detection. He would have known that once Stride’s body was discovered, the police would be on high alert and actively searching for the culprit.

Despite the fact that he was operating on a time crunch, the Ripper still chose to seek out a new victim. Such an action underscored his horrific bloodlust — which resulted in yet another heinous murder.

A Ghastly Legend Is Born 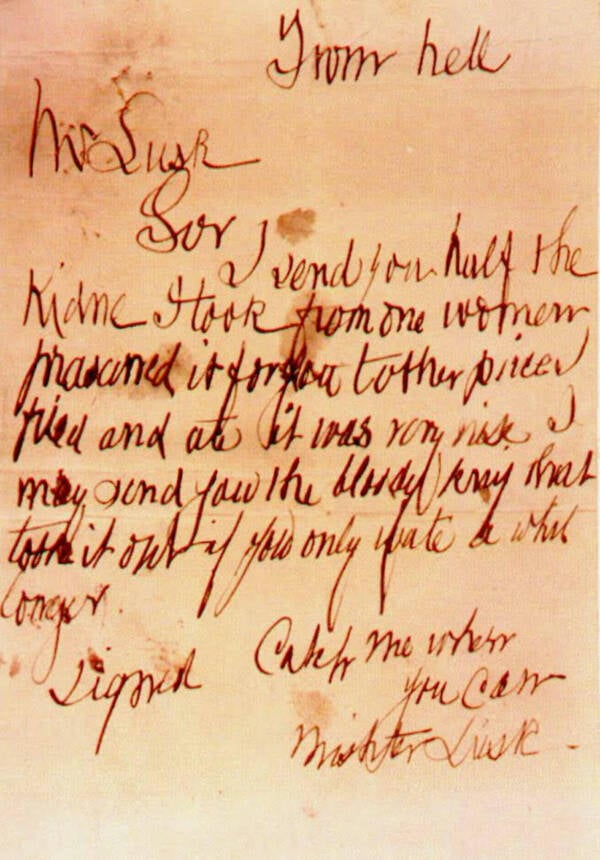 Wikimedia CommonsThe infamous “From Hell” letter, which was sent to the Whitechapel Vigilance Committee on October 16, 1888.

Though Catherine Eddowes’ death happened near the end of the Ripper’s reign of terror — she was the fourth out of five known victims (after Annie Chapman and before Mary Jane Kelly) — the murder cemented the infamous legacy of the serial killer.

It was only after the Double Event — when both Stride and Eddowes were killed in the same night — that the name “Jack the Ripper” became widely known. The name came from the signature on the infamous “Dear Boss” letter, which was believed to have been written by the serial killer.

The eerie letter — which hinted at future murders — was received by the Central News Agency on September 27, 1888.

But a few weeks after Eddowes’ murder, another horrifying “Ripper letter” arrived. This time, it was sent to a neighborhood watch group, and it was addressed “From Hell.” The author described eating half of Eddowes’ kidney — and sent the other half alongside the letter.

While it’s unknown if the kidney actually originated from Eddowes’ body, there’s no question that it was a horrific sight. Londoners who were already on edge from the previous murders were now in full-blown panic mode.

And since the police had apparently failed to capture the killer, they struggled to calm residents. A Times report recorded the massive inflow of tips that the authorities received:

“Since the two above-mentioned murders [Stride and Eddowes] no fewer than 1,400 letters relating to the tragedies have been received by the police, and although the greater portion of these gratuitous communications were found to be of a trivial and even ridiculous character, still each one was thoroughly investigated.”

The police also began deploying more plainclothes officers in the area where the murders had taken place. But despite the efforts of the authorities and vigilantes, Jack the Ripper was never identified. And thus, he wasn’t brought to justice — spawning a ghastly legend of a killer who was never caught.

The murder of Catherine Eddowes may have contributed more to the legend of Jack the Ripper than any other killing. Her tragic death, coupled with the publication of the “From Hell” letter, solidified the notoriety of the serial killer — who would haunt London for years after he vanished.